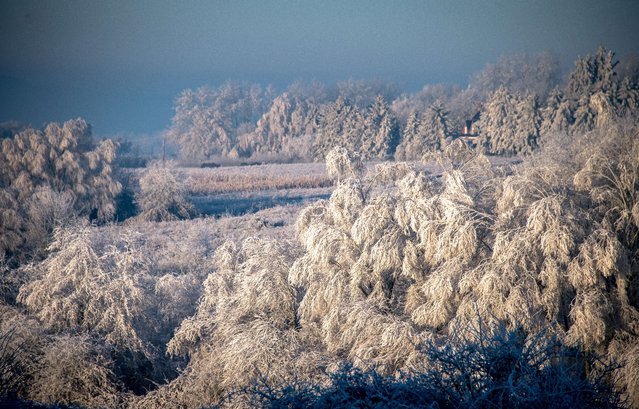 Frost covers the trees and fields in the town of Godewaersvelde, northwestern France on December 30, 2016. (Photo by Philippe Huguen/AFP Photo) 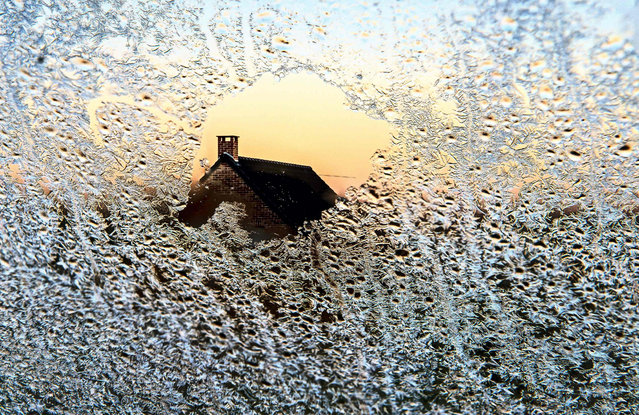 Picture taken of a window covered with frost on December 4, 2016 in Godewaersvelde, northern France. (Photo by Philippe Huguen/AFP Photo) 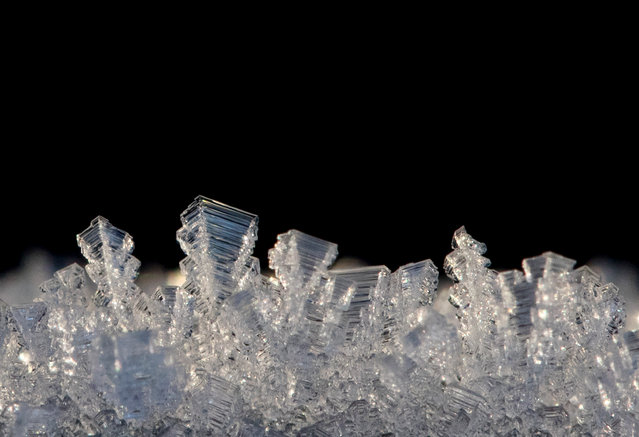 Ice forms on a fence post in Clapham Common on December 29, 2016 in London, England. Freezing temperatures have created a cold, foggy and frosty start for much of England and Wales for a second day. The MET office have issued a yellow weather warning for fog creating difficult driving conditions. (Photo by Dan Kitwood/Getty Images) 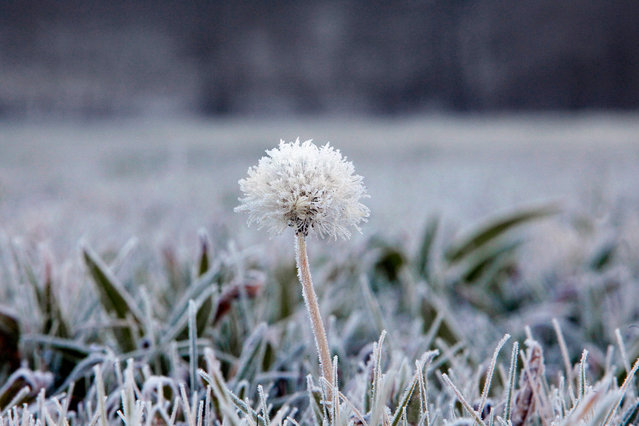 A hoar frost crusted dandelion stands in the middle of a frozen meadow in A Coruna, province of Galicia, northwestern Spain, 09 January 2017 morning. Up to 12 provinces in Spain are under a yellow-level weather alert due to freezing temperatures. (Photo by EPA/Cabalar) 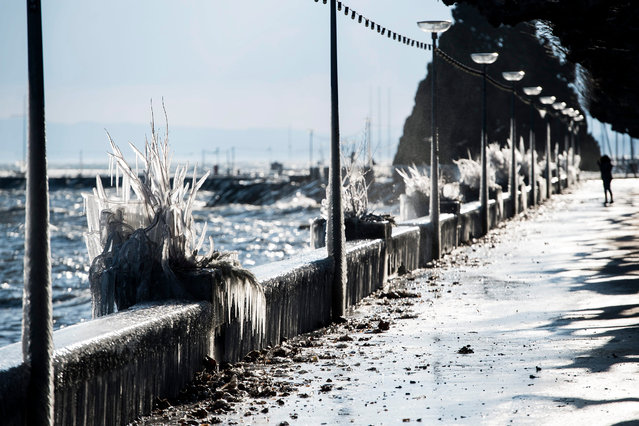 A person walk along the ice-covered promeande after the strong wind at Lake Leman in Versoix, Geneva, Switzerland, 17 January 2017. (Photo by Jean-Christophe Bott/EPA) 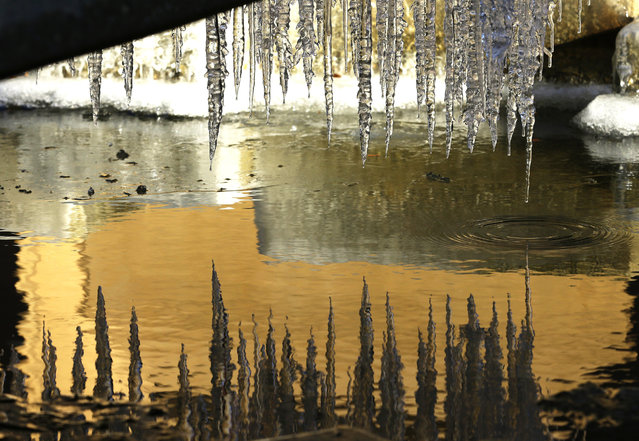 The walls of nearby buildings are reflected in a partially frozen fountain, Wednesday, January 4, 2017, in Tacoma, Wash. Wet winter weather slammed much of the West on Wednesday, with storms dropping several inches of snow on one Oregon city and several feet of the white stuff predicted high in the Sierra Nevada. (Photo by Ted S. Warren/AP Photo) 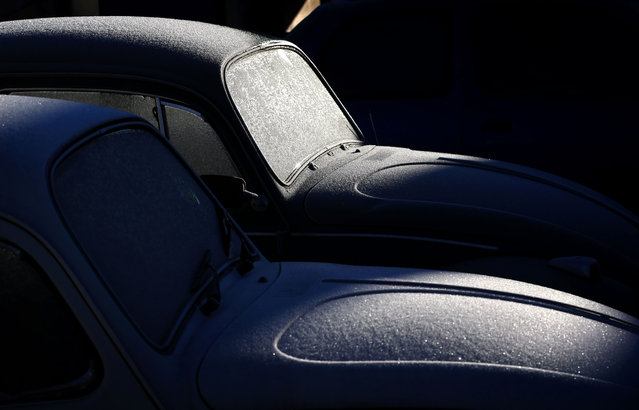 Two VW Beetles covered with ice crystals shimmering in the sunshine outside a garage in Kaufbeuren, Germany, 30 November 2016. (Photo by Karl- Josef Hildenbrand/DPA) 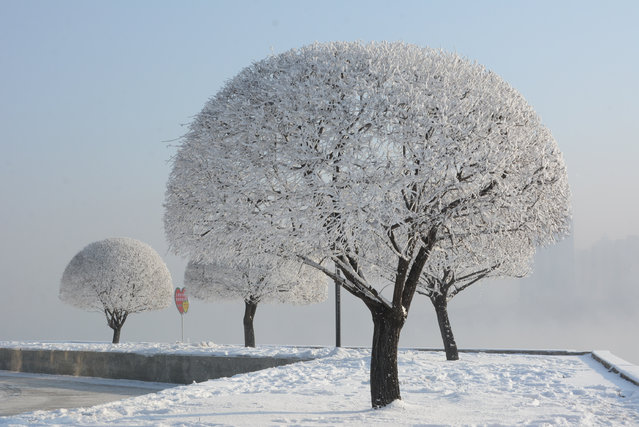 A view of soft rime on trees on the bank of Songhua River, on December 14, 2016 in Jilin city, China. The local rime is the most famous in China as a reservoir keeps discharging bounty of water in the cold winter. (Photo by Feature China/Barcroft Images) 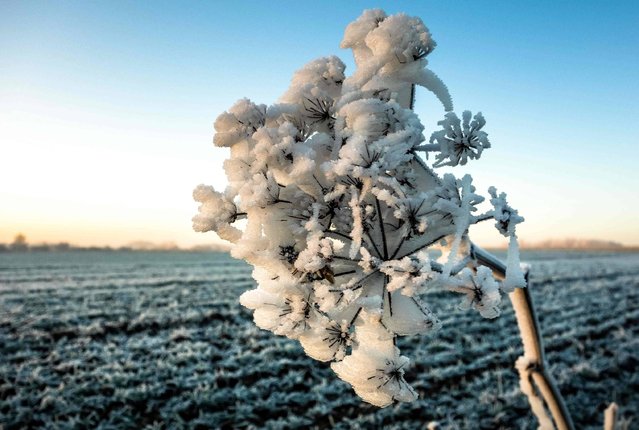 Frost covers the fields on the outskirts of the town of Godewaersvelde, northwestern France on December 30, 2016. (Photo by Philippe Huguen/AFP Photo) 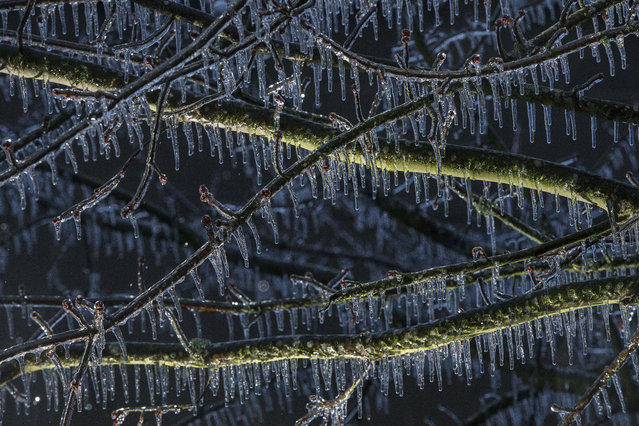 Icicles lengthen in freezing rain as they hang from branches on a maple tree in Eugene, Ore. Wednesday, December 14, 2016. A winter storm brought snow to Oregon’s populous Willamette Valley and other parts of the state on Wednesday. (Photo by Brian Davies/The Register-Guard via AP Photo) 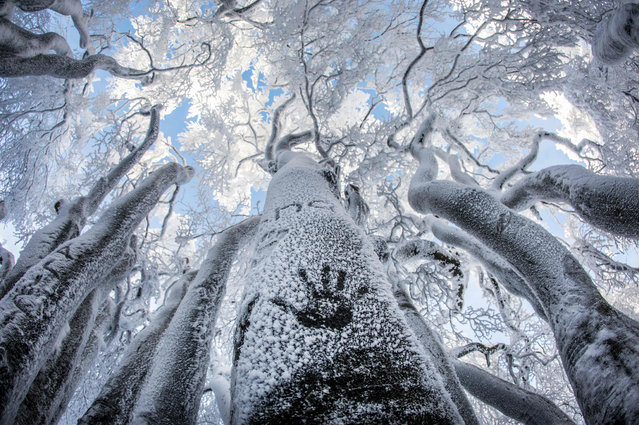 A walker has left a handprint on a snow- covered tree trunk on Grosser Feldberg mountain in the Taunus mountain range, Germany, 16 January 2017. (Photo by Frank Rumpenhorst/DPA) 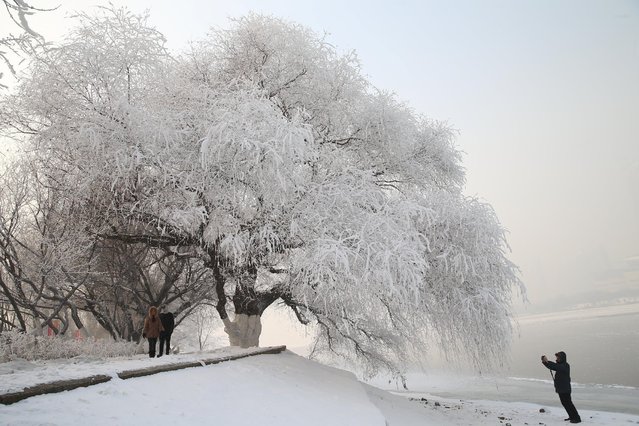 A man captures rime at a park beside a river in Shenyang, Liaoning province, China December 15, 2016. (Photo by Sheng Li/Reuters) 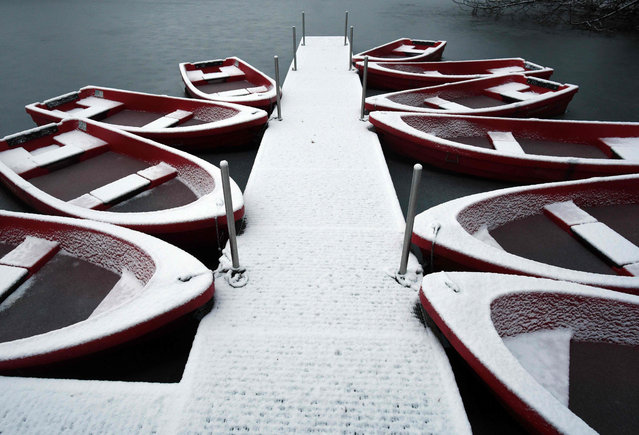 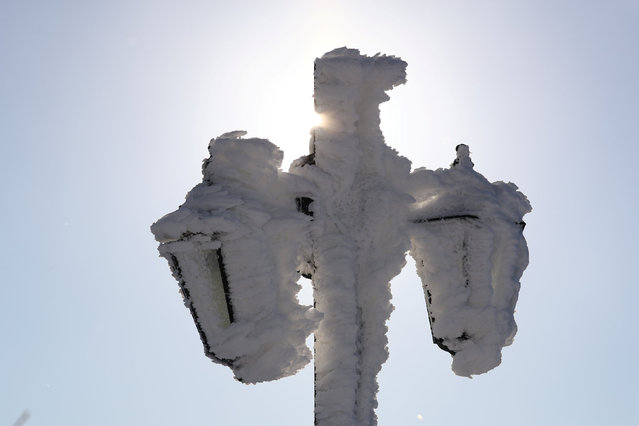 Streetlamps are covered in snow and ice at the Feldberg mountain near Frankfurt, Germany, January 5, 2017. (Photo by Kai Pfaffenbach/Reuters) 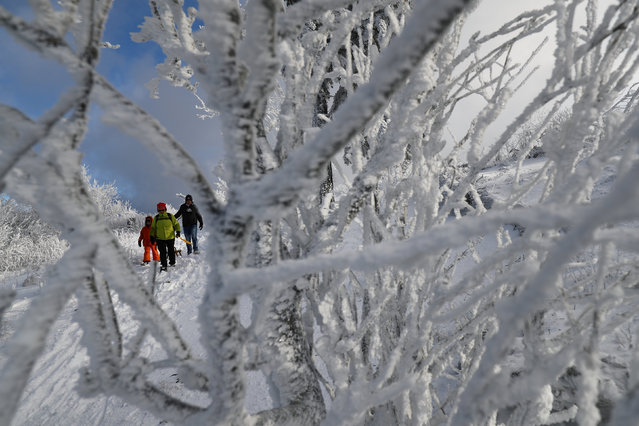 People pull their sledges as they enjoy a sunny day at the snow covered Feldberg mountain near Frankfurt, Germany, January 5, 2017. (Photo by Kai Pfaffenbach/Reuters) 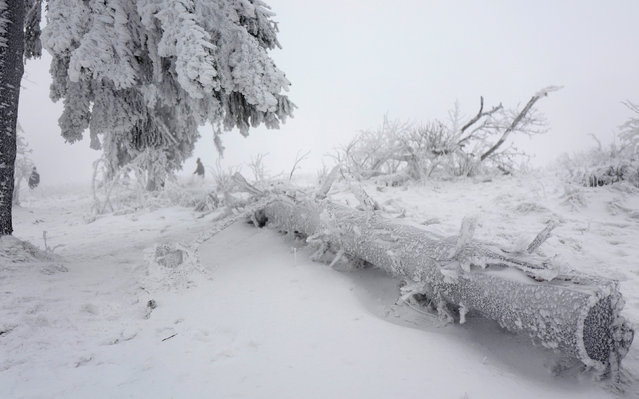 Trees are covered with ice and snow on top of the Feldberg mountain, in Germany January 8, 2017. (Photo by Kai Pfaffenbach/Reuters) 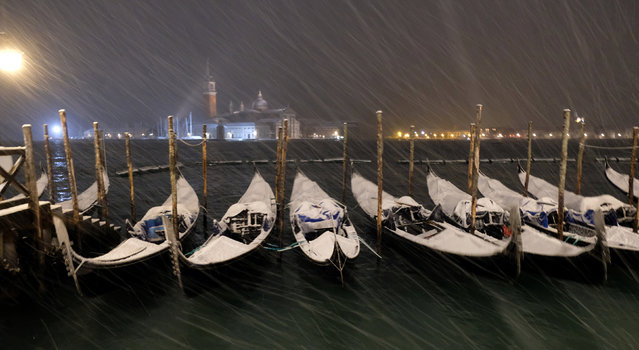 Gondolas are seen during snowfall in the Venice lagoon, northern Italy, January 13, 2017. (Photo by Manuel Silvestri/Reuters) 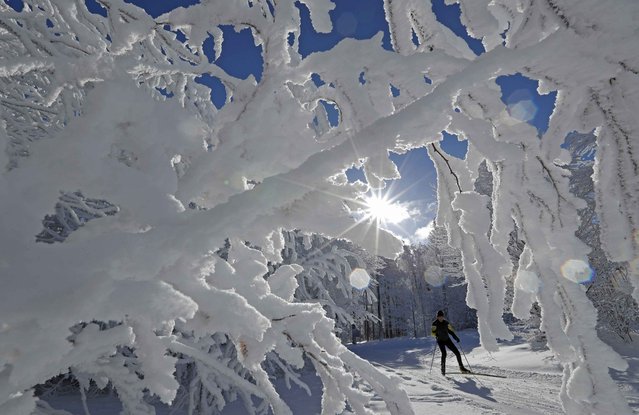 A cross-country skier enjoys a cold and sunny winter's day at the Champ du Feu near Strasbourg, France, January 16, 2017. (Photo by Christian Hartmann/Reuters) 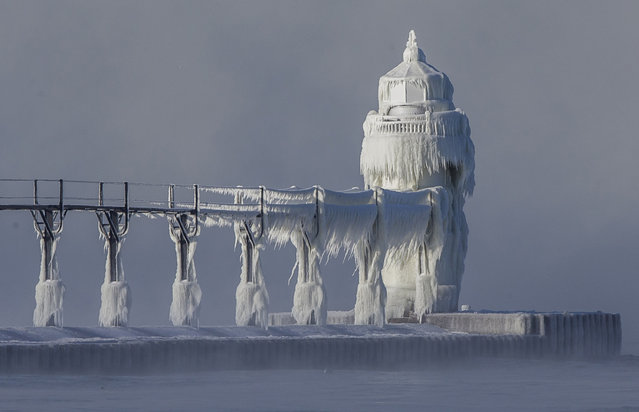 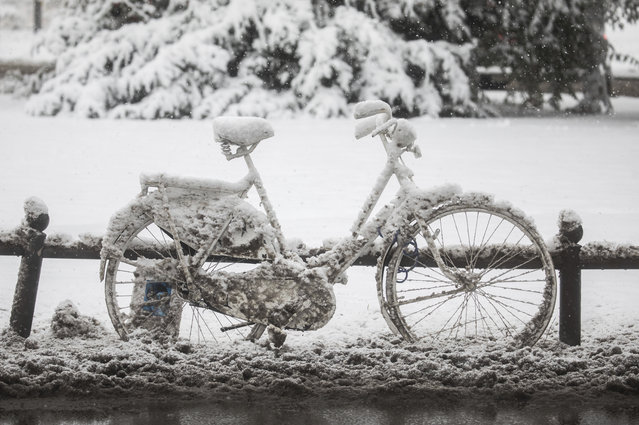 A snow-covered bicycle stands on a roadside in Wiesbaden, western Germany, Tuesday, January 10, 2014. (Photo by Frank Rumpenhorst/DPA via AP Photo) 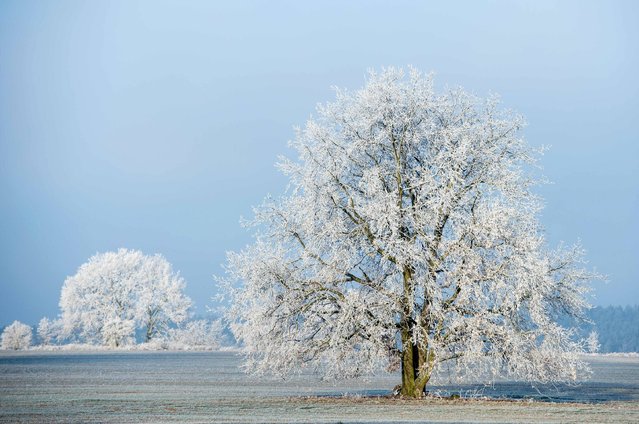 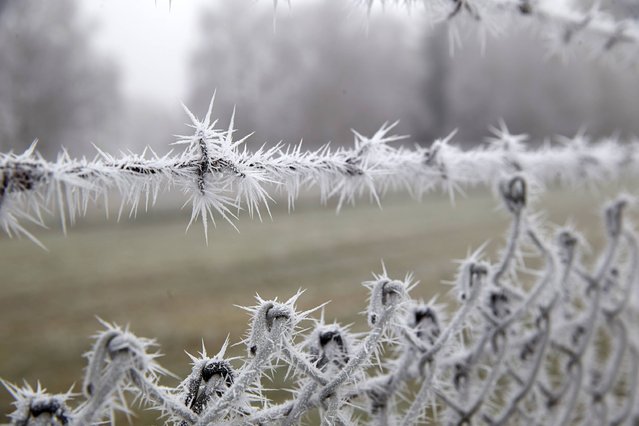