Fact Women of the World 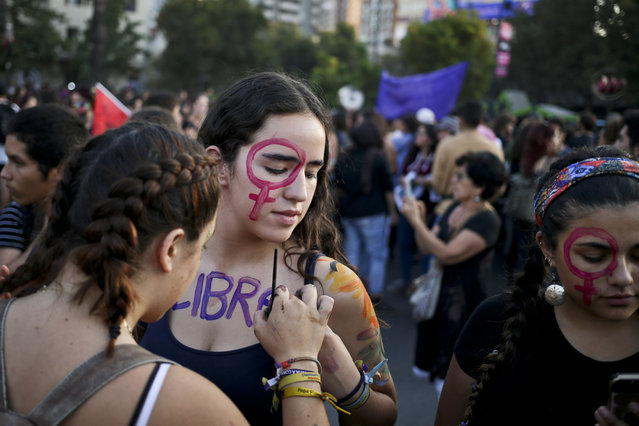 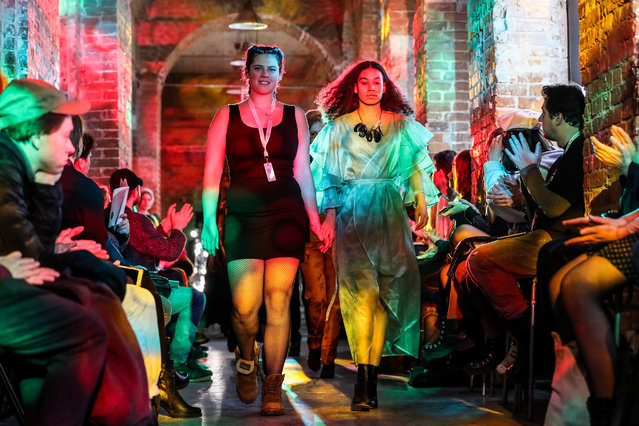 Models showcase creations during the 2019 Young Theatre Fashion Weekend, a project for stage designers, at the Na Strastnom Theatre Centre in Moscow, Russia on March 7, 2019. (Photo by Sergei Savostyanov/TASS) 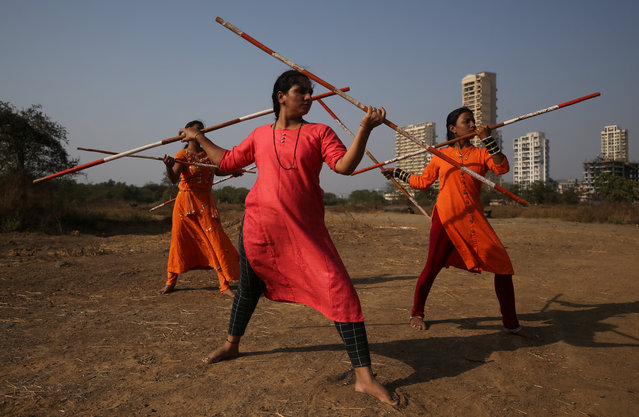 Women practice Shivkalin Yudha Kala, a Maharashtrian martial art on the eve of International Women's Day, at a ground on the outskirts of Mumbai, India March 7, 2019. (Photo by Francis Mascarenhas/Reuters) 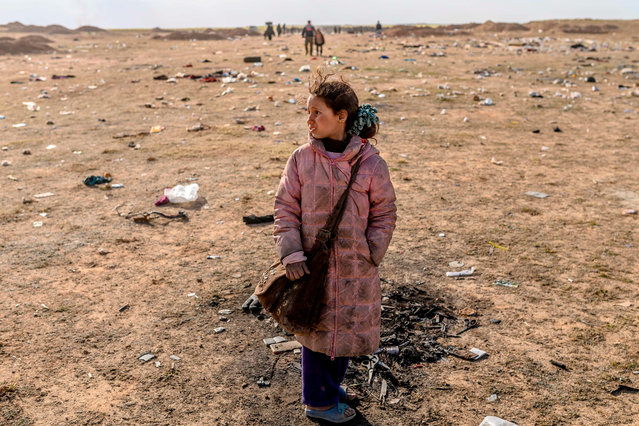 A girl stands alone as women and children evacuated from the Islamic State (IS) group's embattled holdout of Baghouz arrive at a screening area held by the US-backed Kurdish-led Syrian Democratic Forces (SDF), in the eastern Syrian province of Deir Ezzor, on March 5, 2019. More than 7000 people, mostly women and children, have fled the shrinking pocket over the past days, as US-backed forces press ahead with an offensive to crush holdout jihadists. (Photo by Bulent Kilic/AFP Photo) 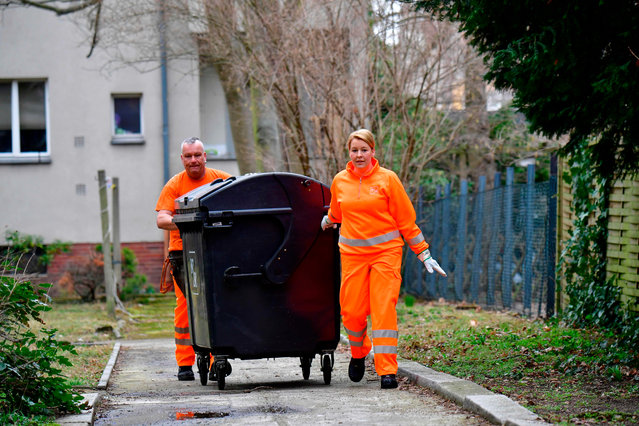 Franziska Giffey (SPD), Federal Minister of Family Affairs, accompanies a waste disposal tour and pushes a garbage can over the sidewalk together with an employee of the Berliner Stadtreinigungsbetriebe (BSR) in Berlin, Germany on March 7, 2019. Giffey takes part in the first network meeting of female garbage workers from all over Germany on the occasion of this year's World Women's Day. (Photo by Monika Skolimowska/dpa-Zentralbild/dpa) 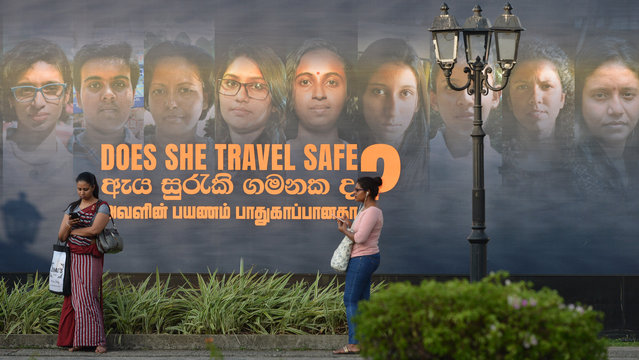 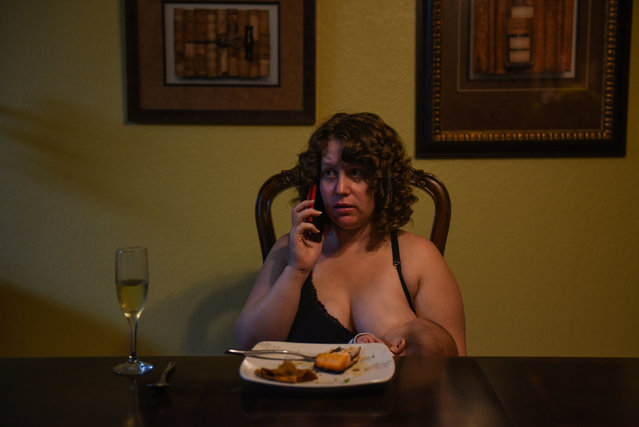 Lauren Hoffmann, 29, a college program manager, talks on the phone while nursing her son Micah at the dinner table in San Antonio, Texas, U.S., February 6, 2019. Hoffmann only had five and a half weeks of accrued paid time off from her job. “You're worried about this tiny little new life, you love it so fiercely”, she said. “Having more time to feel like you're getting good at this ... I think that could only be a good thing”. (Photo by Callaghan O'Hare/Reuters) 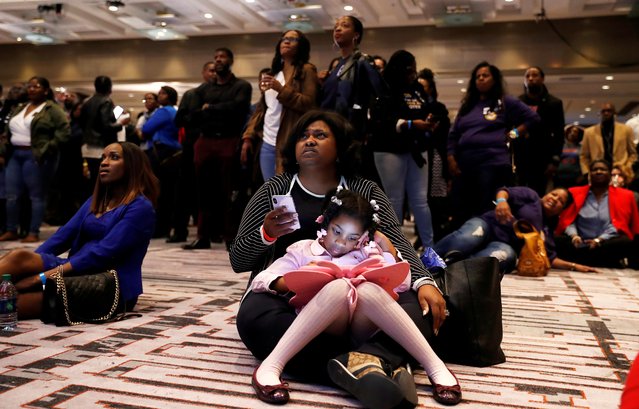 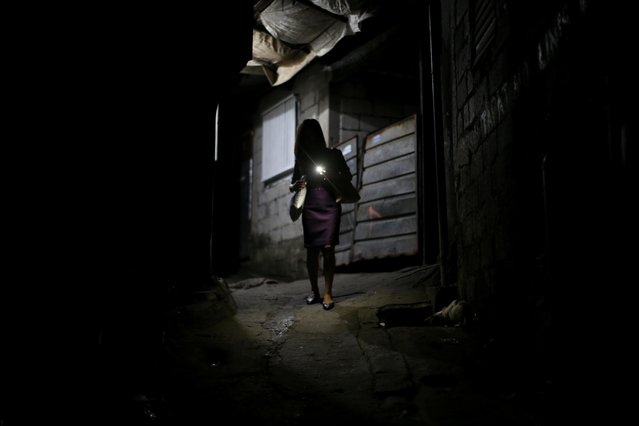 Janice Sarad, 22, who works for a bank, leaves her neighborhood to go to work, in Antipolo City, Rizal province, Philippines, November 26, 2018. (Photo by Eloisa Lopez/Reuters) 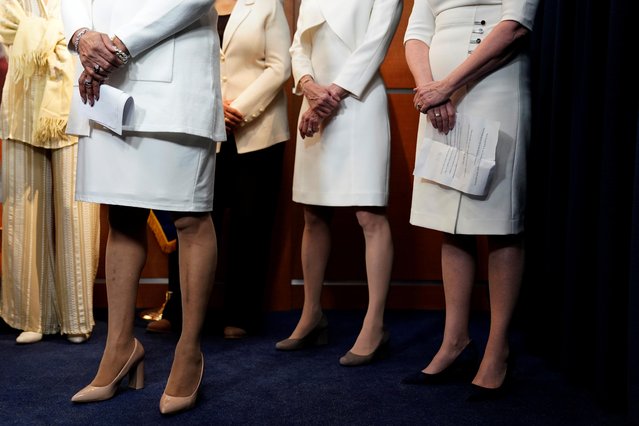 Democratic women House members stand during a briefing with the media recognizing suffragettes before the State of Union address on Capitol Hill in Washington, U.S., February 5, 2019. The lawmakers were dressed elegantly in white to celebrate 100 years of women having the right to vote. (Photo by Joshua Roberts/Reuters) 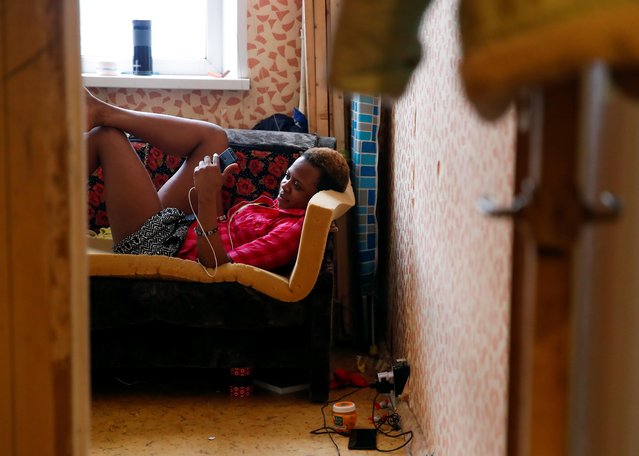 Blessing Obuson, 19, rescued from human traffickers, chats on her smartphone in a shelter on the outskirts of Moscow, Russia February 21, 2019. Obuson thought Russia's World Cup would be an opportunity to find a job and flew into Moscow from Nigeria last June on a fan ID. Instead, she found herself forced to work as a prostitute. She said she was locked in a flat on the outskirts of Moscow and forced into s*x work along with 11 other Nigerian women who were supervised by a madam, also from Nigeria. “I cried really hard. But what choice did I have?” Obuson told Reuters after being freed by anti-slavery activists. She said her madam had confiscated her passport and told her she'd only get it back once she'd worked off a fictional debt of $50,000. (Photo by Maxim Shemetov/Reuters) 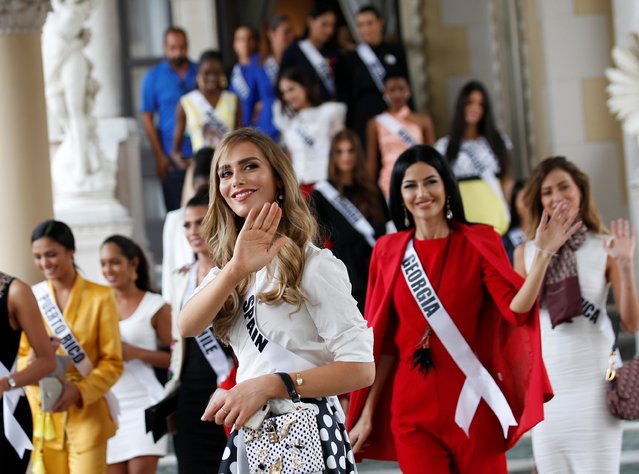 Miss Spain Angela Ponce, the first transgender woman to take part in the Miss Universe contest, visits the Government House with fellow contestants after their meeting with Thai Prime Minister Prayut Chan-o-cha (not pictured) to promote the event, at the Government House, in Bangkok, Thailand December 11, 2018. (Photo by Narong Sangnak/Pool via Reuters) 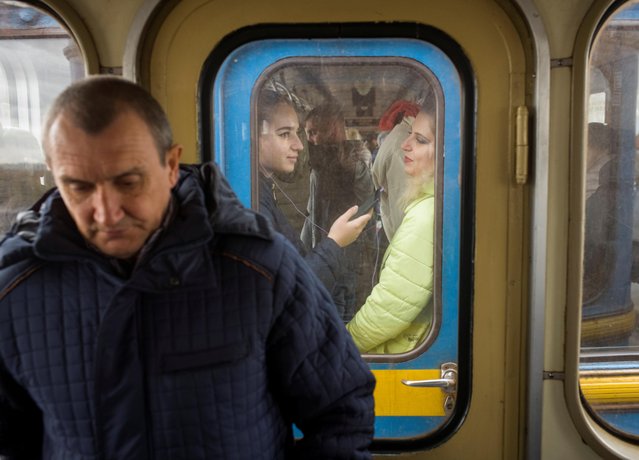 Women use a smartphone as they ride the metro in Kiev, Ukraine on October 25, 2018. (Photo by Gleb Garanich/Reuters) 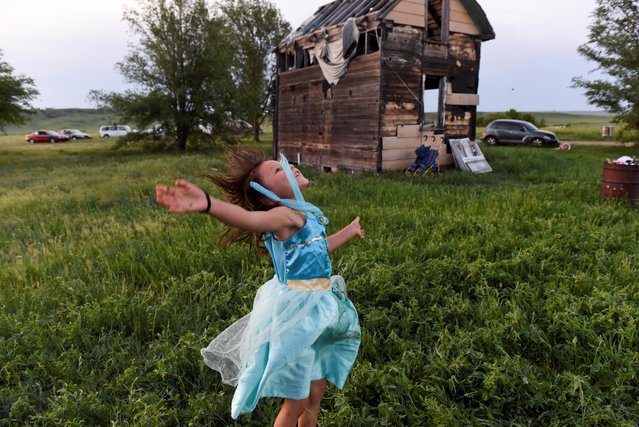 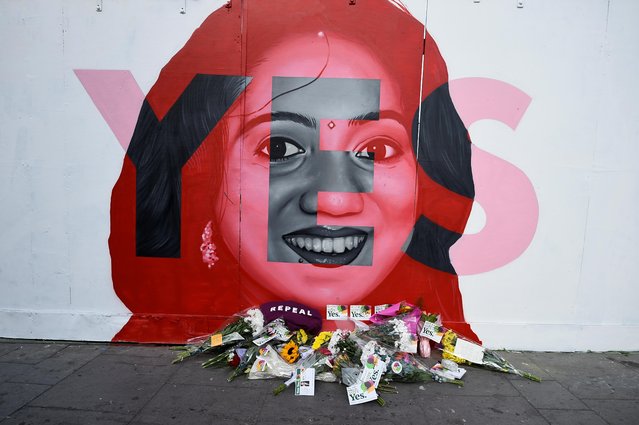 Flowers are left at the foot of a new mural of Savita Halappanavar put up on the day of the abortion referendum that repealed Ireland's strict abortion laws in Dublin, Ireland May 25, 2018. Hundreds of people left flowers and candles at a large mural of Halappanavar, the 31-year-old Indian whose death in 2012 from a septic miscarriage after being refused a termination spurred lawmakers into action. (Photo by Clodagh Kilcoyne/Reuters) 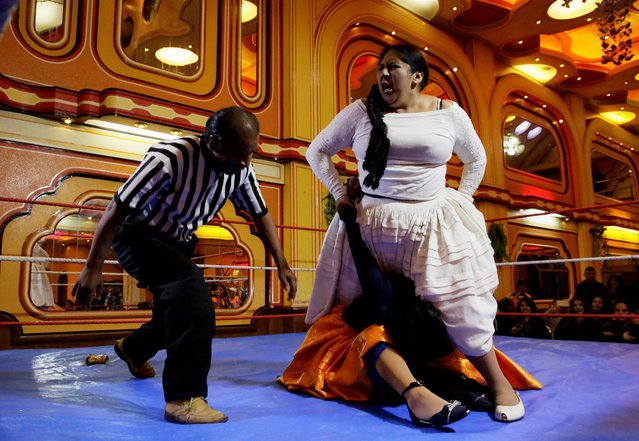 A Cholita (Andean woman) fighter makes a key to their opponent during a wrestling session at the Havana Hotel Cholet in El Alto, outskirts of La Paz, Bolivia, June 29, 2018. (Photo by David Mercado/Reuters) 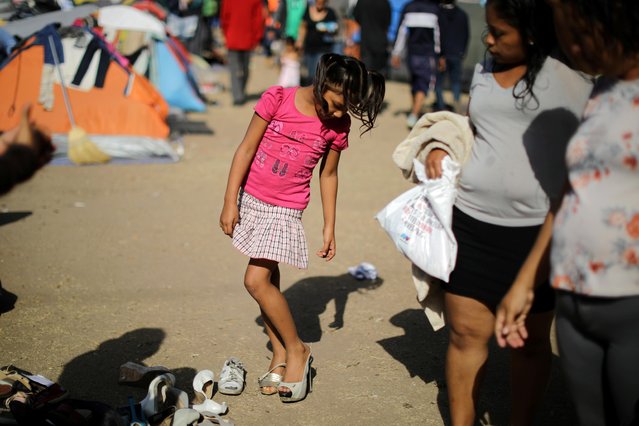 A girl tries on shoes as she waits with members of a caravan from Central America, who are trying to reach the United States, in a temporary shelter in Tijuana, Mexico, November 24, 2018. (Photo by Lucy Nicholson/Reuters) 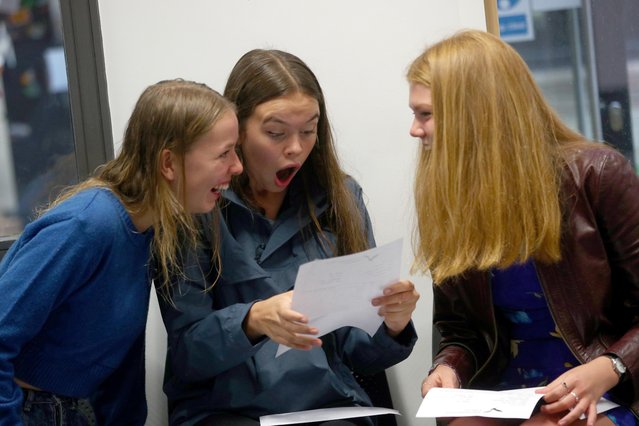 Students react as they receive their “A” level results at Stoke Newington School and Sixth Form in London, Britain on August 16, 2018. (Photo by Hannah McKay/Reuters) 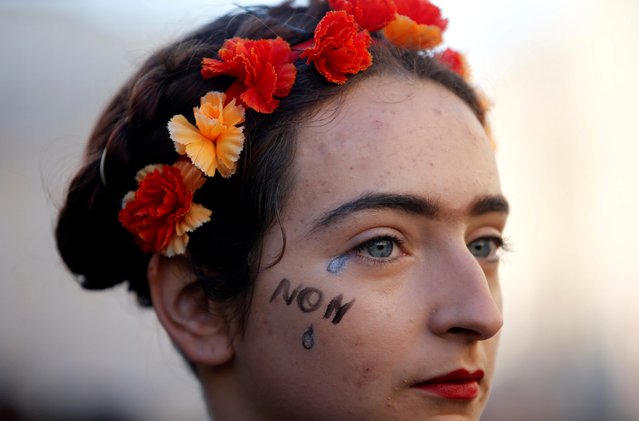 A woman attends a rally against gender-based and sexual violence against women in Marseille, France, November 24, 2018. (Photo by Jean-Paul Pelissier/Reuters) 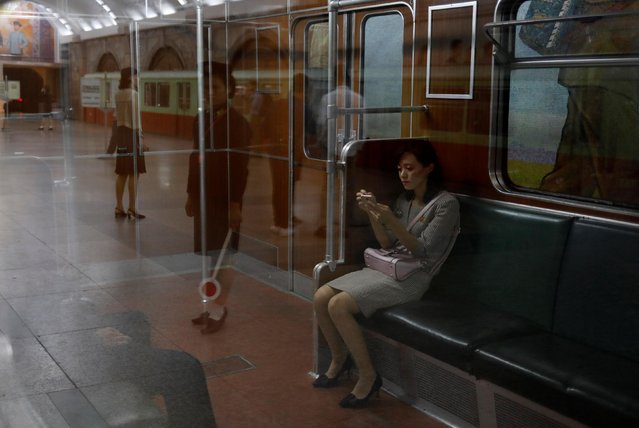 A woman sits in a train at a subway station in Pyongyang, North Korea, September 11, 2018. (Photo by Danish Siddiqui/Reuters) 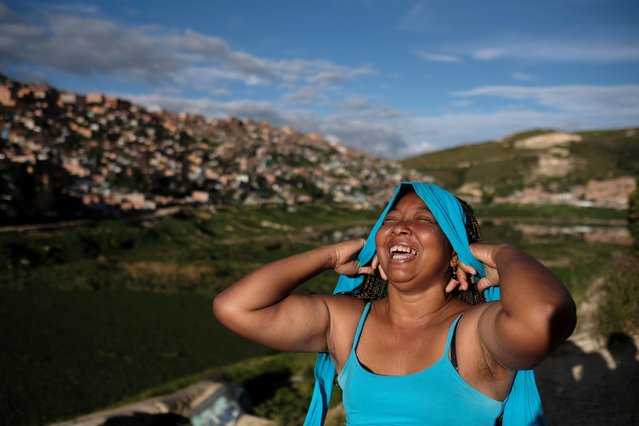 Lina, who said she was raped by dozens of right-wing paramilitary fighters in the Montes de Maria region during the five-decade civil war, laughs as she puts on a hairband in Soacha, on the outskirts of Bogota, Colombia, June 12, 2018. Lina is determined to speak to the truth tribunal after she – and many women like her – was forced to remain silent during the conflict because paramilitary fighters controlled local authorities. “I had to put on a mask to hide the pain that I felt from my child. After 22 years, I can declare the facts to the competent authorities”, she said. (Photo by Nacho Doce/Reuters) 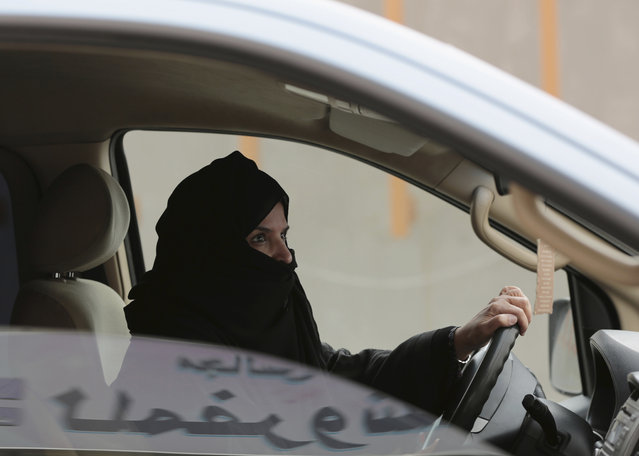 In this March 29, 2014 file photo, Aziza al-Yousef drives a car on a highway in Riyadh, Saudi Arabia, as part of a campaign to defy Saudi Arabia's ban on women driving. As of Tuesday, May 22, 2018, at least 10 Saudi women's rights activists – seven women and three men – are being interrogated and held without access to a lawyer in Saudi Arabia, according to people familiar with the arrests last week. (Photo by Hasan Jamali/AP Photo) 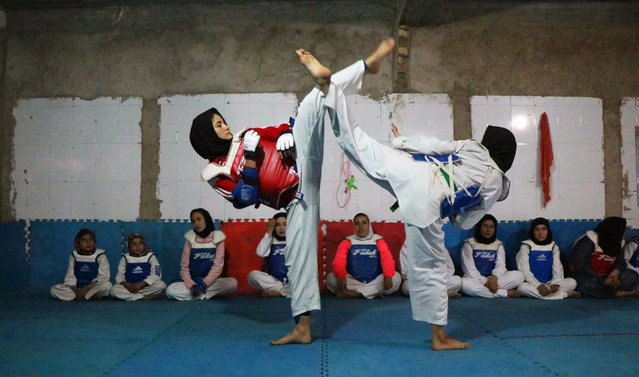 Afghan girls practice Taekwon-do during a martial arts class in Herat, Afghanistan, 06 March 2019. For nearly two decades during the Taliban rule in Afghanistan sports and games including boxing, soccer, volleyball, kite flying, and chess had been banned as immoral and unlawful. During the Taliban regime it was forbidden for women to participate in such sports and games. The Taliban's Islamist regime was toppled by a US-led campaign in late 2001. (Photo by Jalil Rezayee/EPA/EFE)