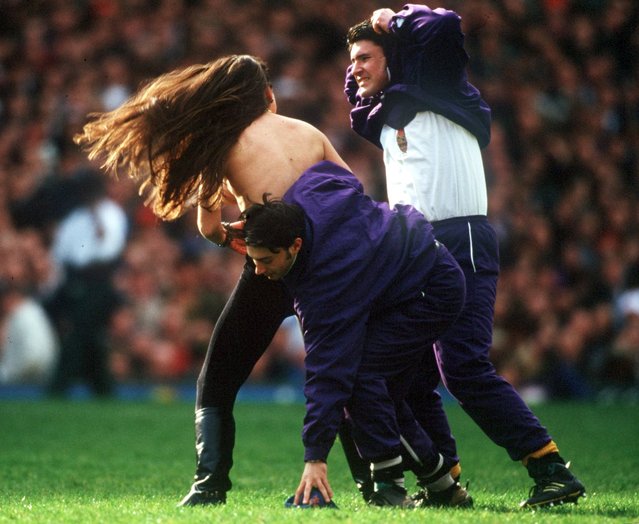 A female streaker is apprehended by ground staff after she ran topless on to the field during the England v Wales 5 nations rugby match at Twickenham, England, on March 19, 1994. (Photo by David Cannon/Allsport) 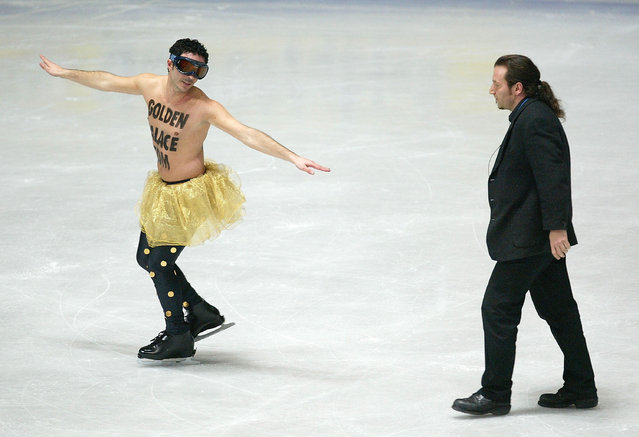 A streaker is chased by a sercurity guard on the ice during the ladies free skating program at the 2004 World Figure Skating championships at Westfalenhalle on March 27, 2004 in Dortmund, Germany. (Photo by Stuart Franklin/Getty Images) 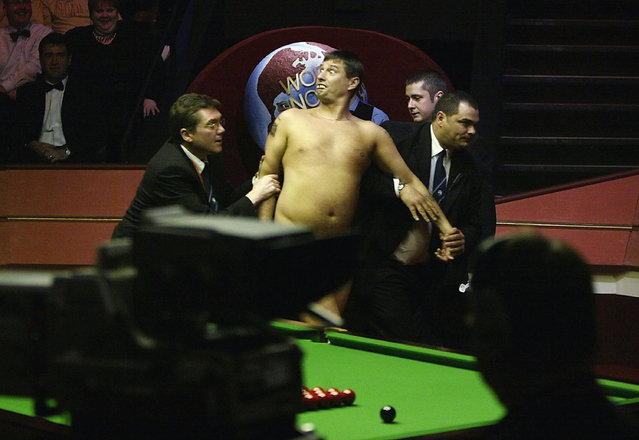 A streaker is led out of the arena during the Embassy World Snooker Final between Ronnie O'Sullivan and Graeme Dott at the Crucible Theatre on May 3, 2004 in Sheffield, England. (Photo by Gary M.Prior/Getty Images) 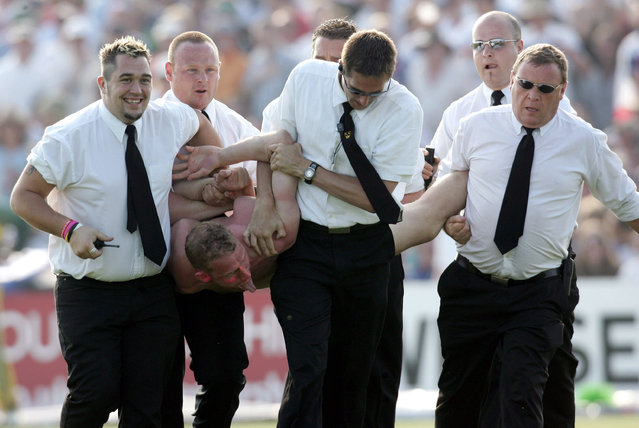 Security escort a streaker off the field during the NatWest Series One Day International between England and Australia played at the County Ground on June 19, 2005 in Bristol, United Kingdom. (Photo by Tom Shaw/Getty Images) 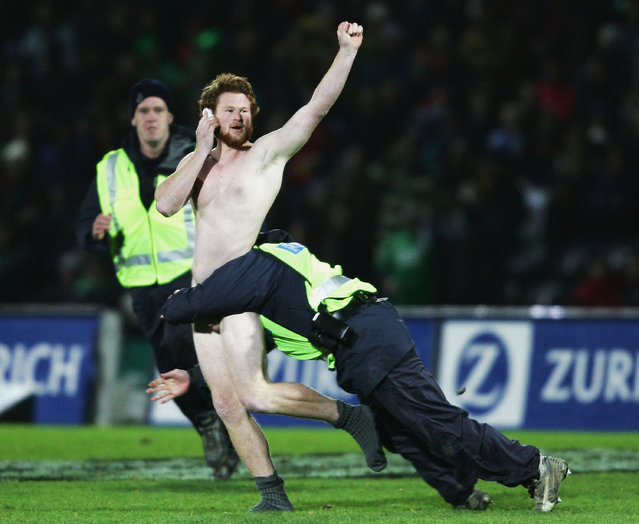 A streaker is tackled by the police during the match between British and Irish Lions and Manawatu at Arena Manawatu on June 28, 2005 in Palmerston North, New Zealand. (Photo by Shaun Botterill/Getty Images) Australia's Andrew Symonds (front) clashes with a streaker (back) during the second final in the one-day triangular series cricket match in Brisbane on March 4, 2008. Australia are chasing India's total of 258. (Photo by Greg Wood/AFP Photo) 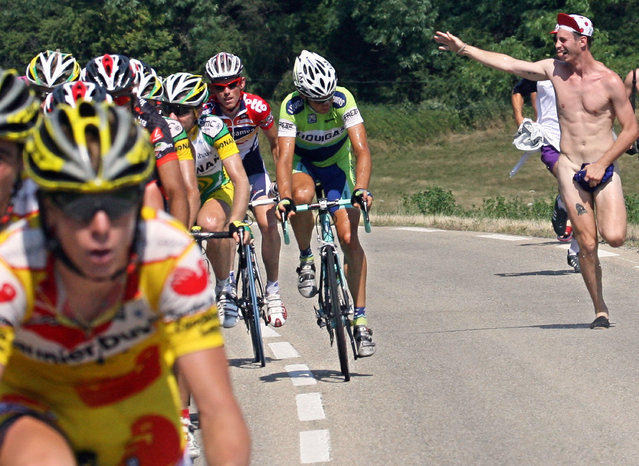 A naked supporter runs by the cyclists during the 197 km eighteenth stage of the 93rd Tour de France cycling race from Morzine to Macon, 21 July 2006. Tosatto won the stage. (Photo by Javier Soriano/AFP Photo) 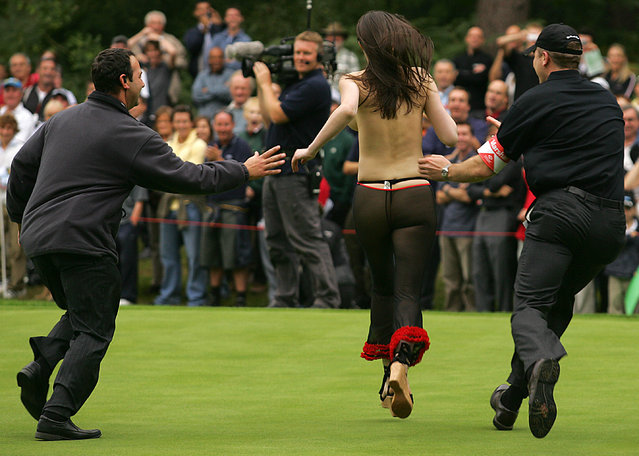 Marshalls try to get their hands on a streaker as golfers Michael Campbell of New Zealand and Paul McGinley of Ireland play the World Match Play final at Wentworth golf club some 20 miles west of London, 18 September 2005. Campbell won the title at the 17th hole. (Photo by Odd Andersen/AFP Photo) 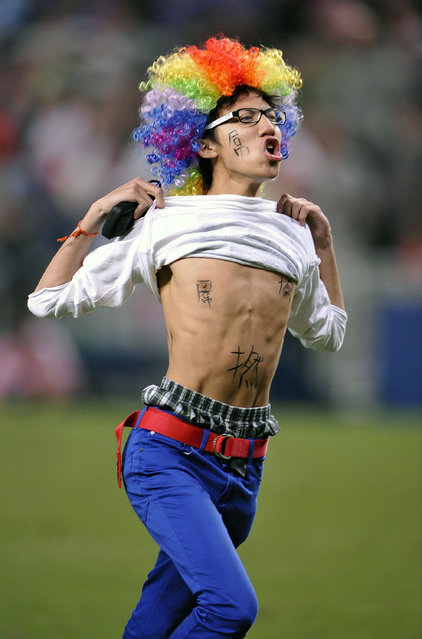 A streaker runs onto the field at the end of the final match between Samoa and New Zealand on day three of the IRB Hong Kong Sevens on March 28, 2010 in Hong Kong. (Photo by Victor Fraile/Getty Images) 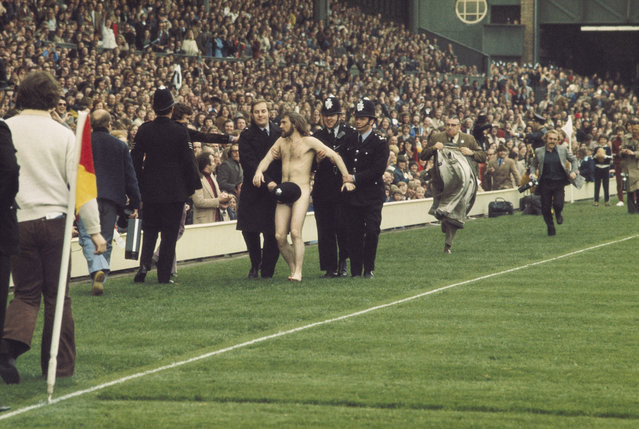 A streaker at Twickenham is discretely led off by police during the England v Wales rugby international, in London, England, 1974. (Photo by David Cannon/Allsport) 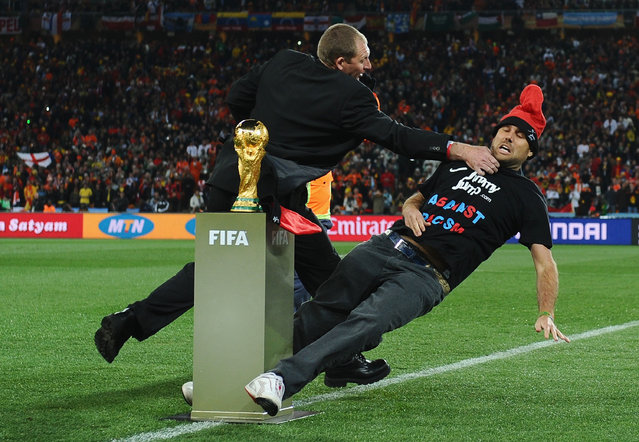 A pitch invader is wrestled away from the World Cup Trophy by security, prior to the 2010 FIFA World Cup South Africa Final match between Netherlands and Spain at Soccer City Stadium on July 11, 2010 in Johannesburg, South Africa. (Photo by Laurence Griffiths/Getty Images) A streaker runs on the 18th hole during the Day Four Singles Matches at the Muirfield Village Golf Club on October 6, 2013 in Dublin, Ohio. (Photo by Gregory Shamus/Getty Images) 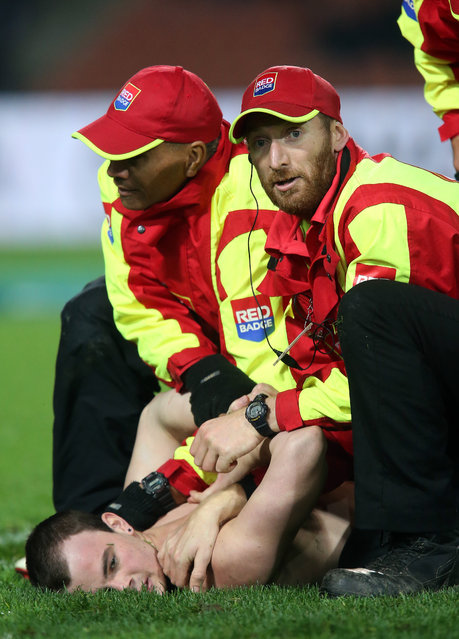 A streaker is caught by security staff during the round 18 Super Rugby match between the Chiefs and the Hurricanes at Waikato Stadium on July 4, 2014 in Hamilton, New Zealand. (Photo by Jason Oxenham/Getty Images) 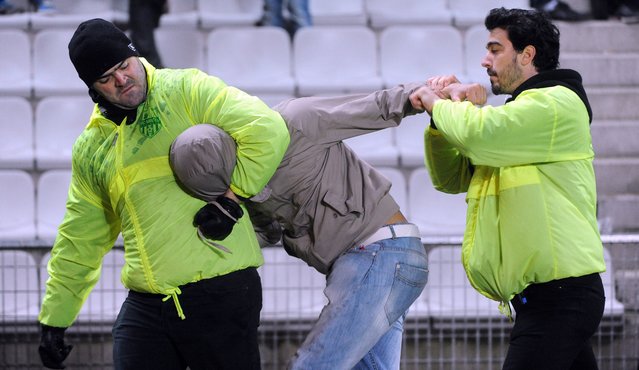