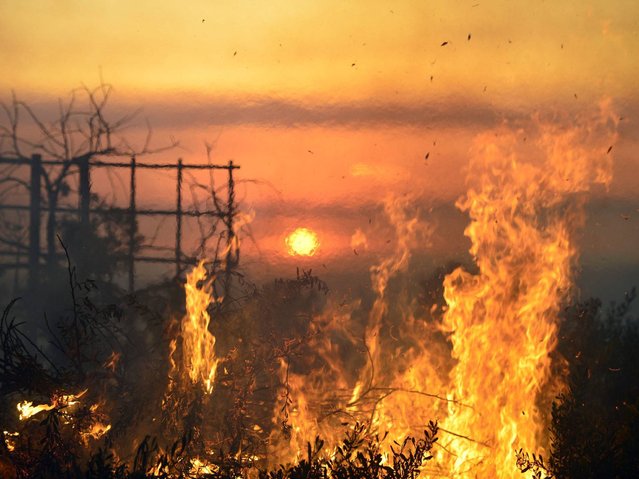 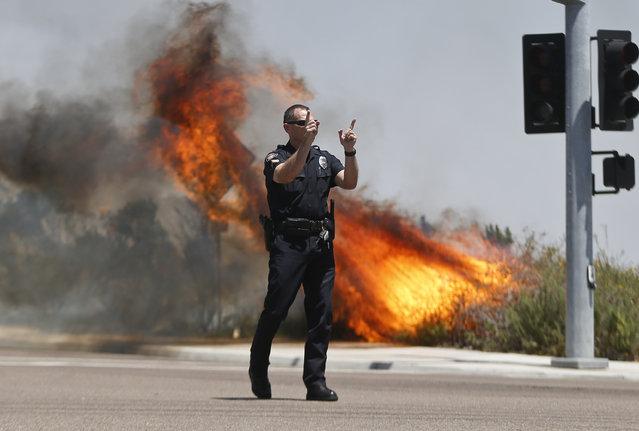 A Carlsbad,Calif. police officer turns traffic away as flames leap behind him Wednesday, May 14, 2014, in Carlsbad, Calif. Weather conditions that at least temporarily calmed allowed firefighters to gain ground early Wednesday on a pair of wildfires that forced thousands of residents to leave their homes. (Photo by AP Photo) 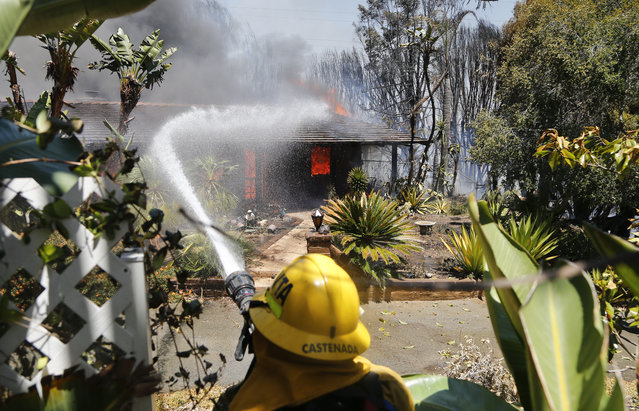 A firefighter pours water onto a fully engulfed home Wednesday, May 14, 2014, in Carlsbad, Calif. A brush fire Wednesday forced evacuation of thousands of people in the city of Carlsbad where at least two homes burned amid a Southern California heat wave that sparked several blazes. (Photo by AP Photo) 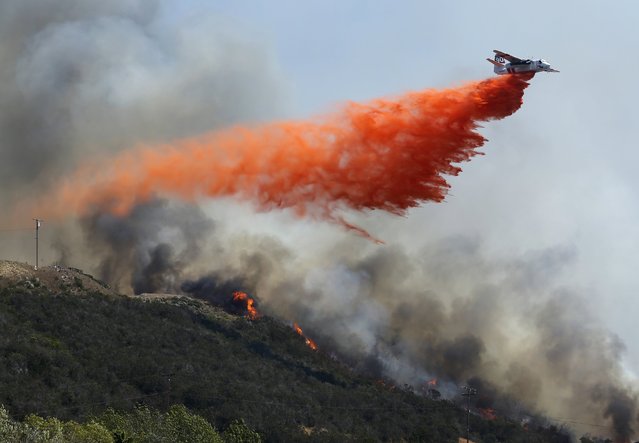 A water bomber makes a drop on flames burning on a hillside as the Cocos Fire continues in San Marcos, California May 15, 2014. Wildfires were raging in southern California on Thursday, keeping thousands of residents and students away from their homes after San Diego county officials maintained evacuation advisories. (Photo by Mike Blake/Reuters) 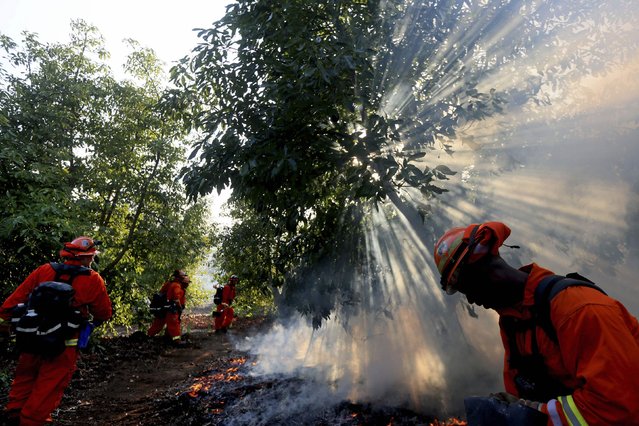 A prison crew battles a fire in an avocado grove outside Fallbrook, California May 14, 2014. More than 20 structures, including several homes, burned to the ground and thousands of people were ordered to evacuate on Wednesday, as a wind-lashed wildfire roared out of control in the heart of a Southern California coastal community. The so-called Poinsettia Fire, which erupted shortly before 11 a.m. in Carlsbad, some 25 miles north of San Diego, quickly became the most pressing battle for crews fighting flames across the region amid soaring temperatures and hot Santa Ana winds. (Photo by Sandy Huffaker/Reuters) 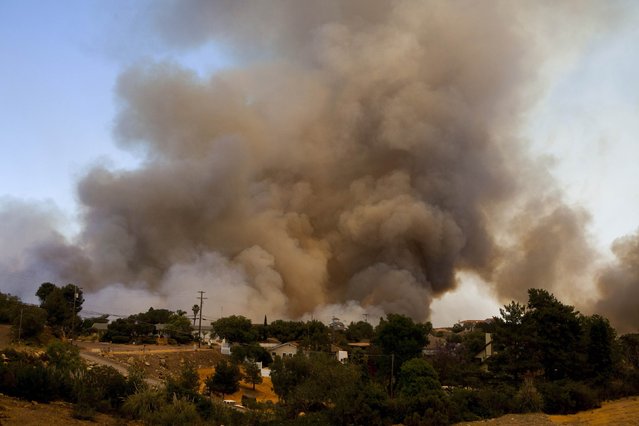 The Cocos Fire rages in San Marcos, California May 15, 2014. (Photo by Sam Hodgson/Reuters) 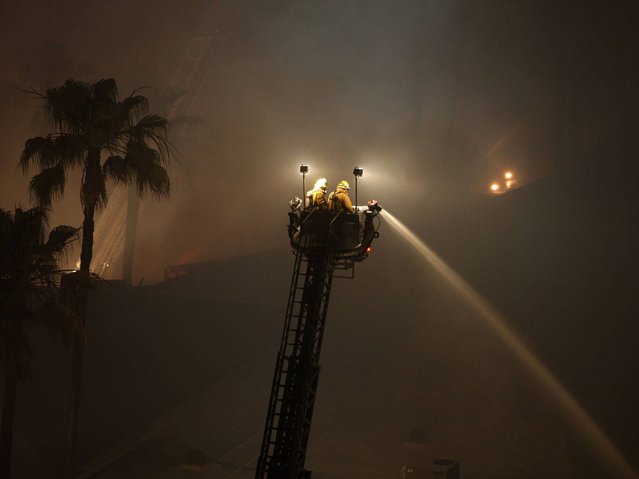 Fire agencies throughout the state are scrambling to prepare for what is expected to be a dangerous year of wildfires in this third year of extreme drought in California. (Photo by David McNew/Getty Images) 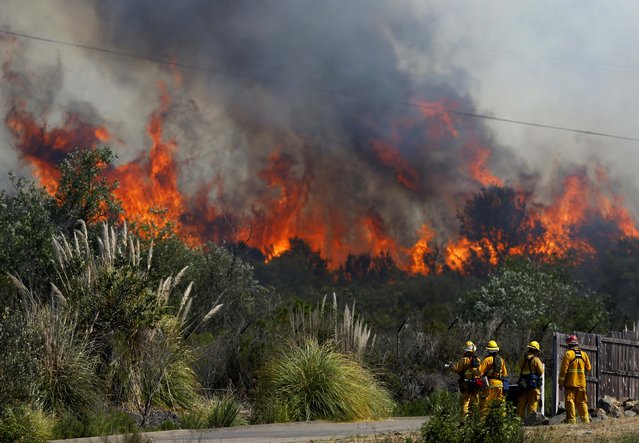 Fire fighters keep a close watch on the flames from the Cocos Fire as they stand ready to protect a home in San Marcos, California May 15, 2014. (Photo by Mike Blake/Reuters) 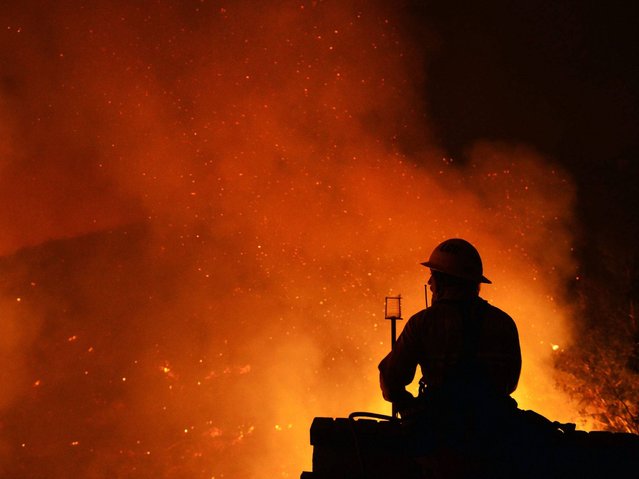 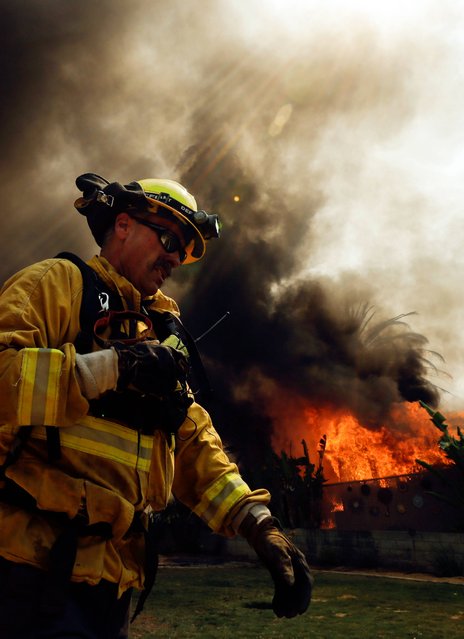 A firefighter moves past a burning structure during a wildfire Thursday, May 15, 2014, in Escondido, Calif. One of the nine fires burning in San Diego County suddenly flared Thursday afternoon and burned close to homes, trigging thousands of new evacuation orders. (Photo by Gregory Bull/AP Photo) 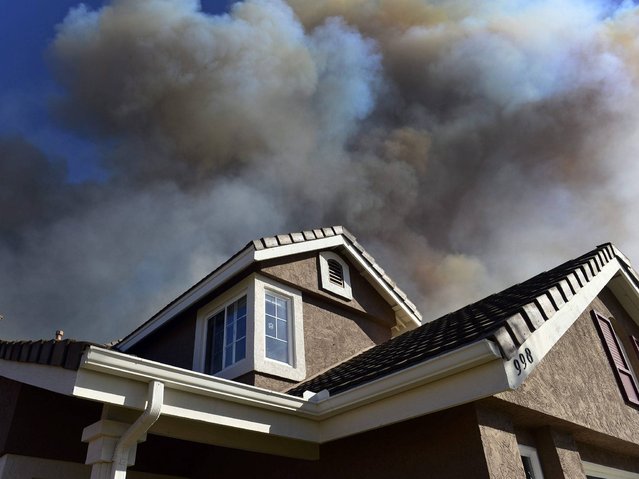 Smoke from a nearby fire billowing behind homes in San Marcos, in the San Diego county, California. (Photo by Stuart Palley/EPA) 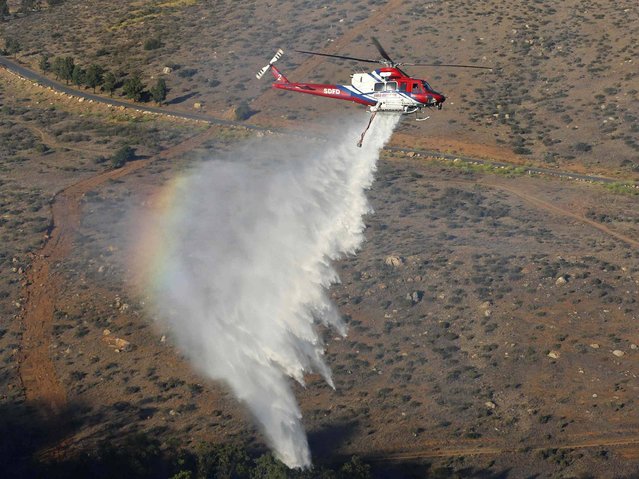 A helicopter drops water on a burning canyon next to homes as firefighters battle the Bernardo Fire, north of San Diego, California. (Photo by Mike Blake/Reuters) 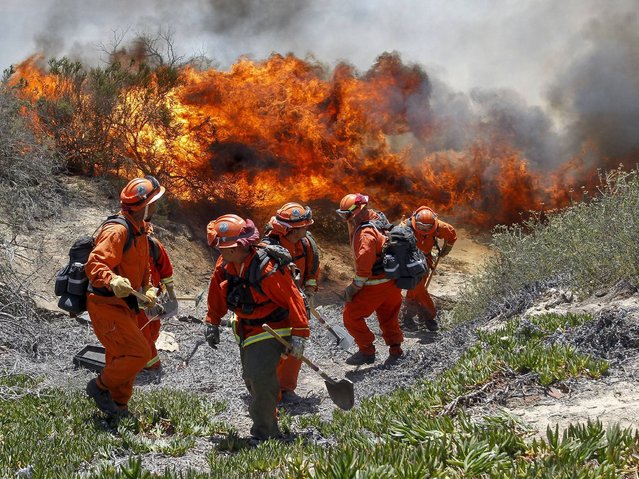 Inmates from Oak Glen Fire Camp in Riverside retreat to higher ground as the flames start to move close while they work to control the fire near Oriole Court in Carlsbad. (Photo by Hayne Palmour IV/AP Photo/U-T San Diego) 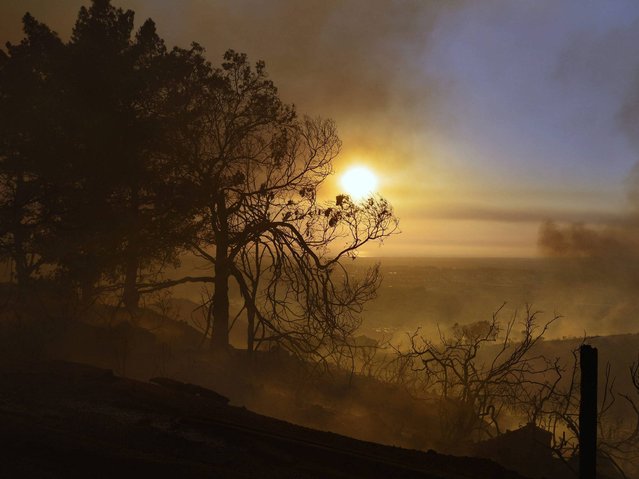