Sad Swimming Places around the World 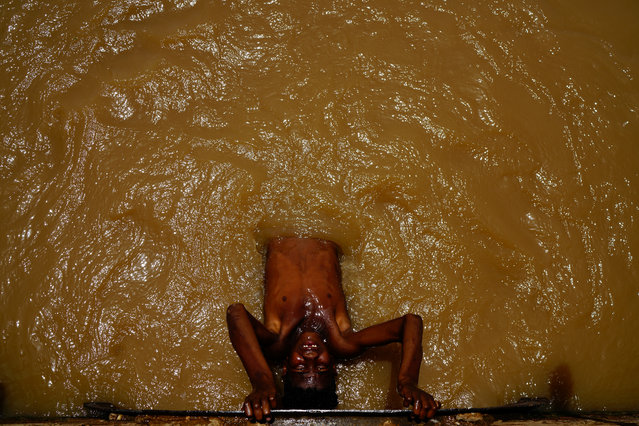 A Sudanese boy cools himself off in an irrigation channel near Khartoum, Sudan, June 19, 2019. (Photo by Umit Bektas/Reuters) 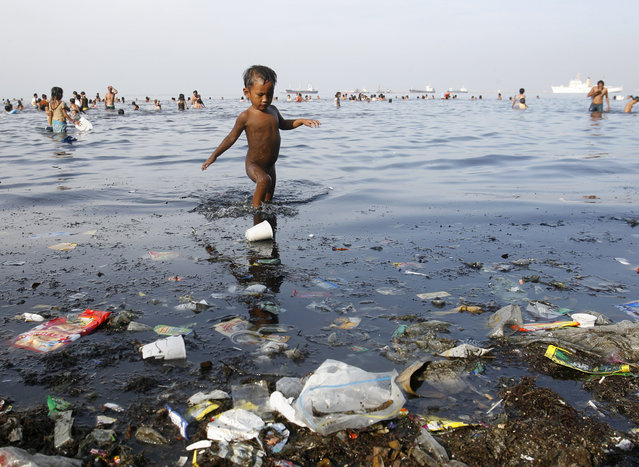 A boy paddles among garbage in the waters of Manila bay during Easter Sunday in Manila, Philippines on April 24, 2011. (Photo by Cheryl Ravelo/Reuters) 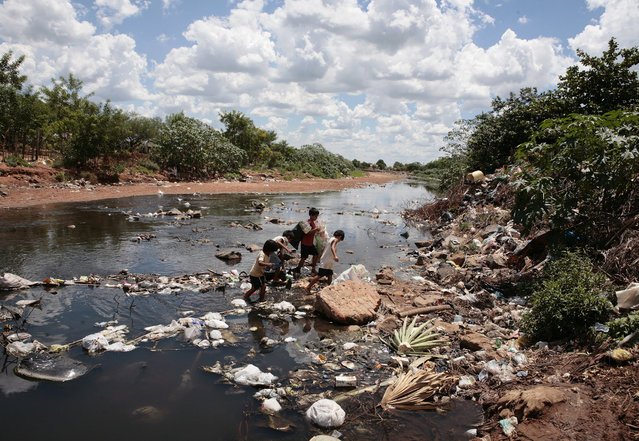 Children cross a garbage-filled tributary of the Paraguay River in Asuncion February 10, 2010. Temperatures soared to nearly 40 degrees Celsius (104 degrees Fahrenheit) as a heat wave caused electricity transformers to overheat, blacking out parts of the country and causing water shortages when city pumps shut down. (Photo by Jorge Adorno/Reuters) 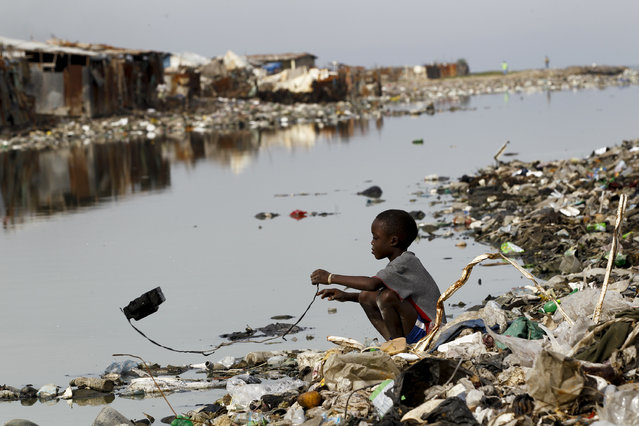 A boy plays in a refuse-clogged canal in Port-au-Prince, Haiti on January 9, 2011. When the ground shook Haiti on a Caribbean winter afternoon a year ago, toppling homes like cards and killing around 250,000 people, world leaders promised quick action to ease the human tragedy and rebuild the country. A year on, the Western Hemisphere's poorest country is still reeling from the earthquake, and the international community's capacity to deliver and sustain aid effectively is being sorely tested. (Photo by Jorge Silva/Reuters) 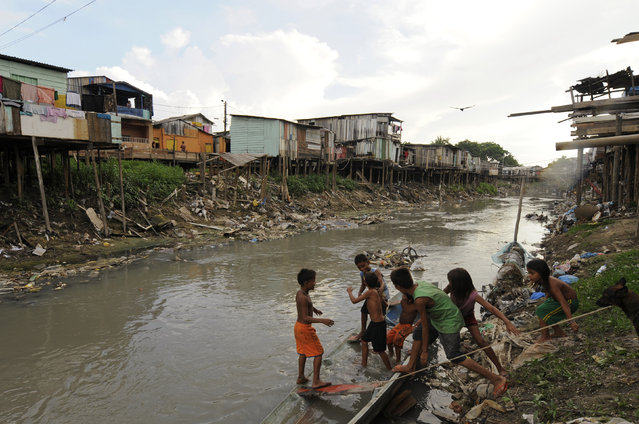 Children play in a canoe in a canal branching off the Negro River, Brazil, which flows through their slum but is drying up quickly in the middle of the Amazon basin's dry season, in Manaus October 14, 2009. After one of the worst flood seasons in recent history early this year, the excess of garbage that was left by the high waters is now affecting the region's residents. (Photo by Raphael Alves/Reuters/Amazonaspress) 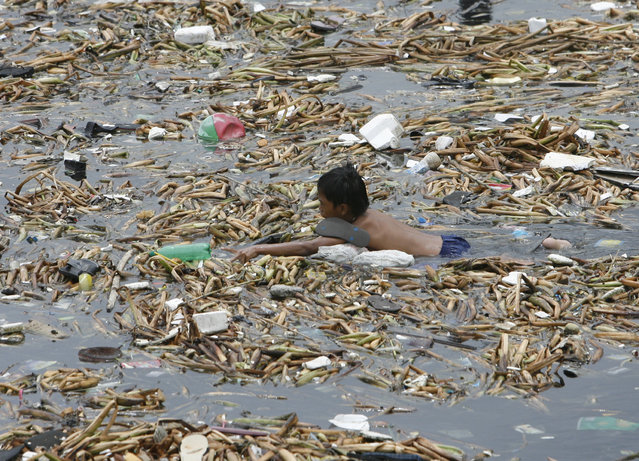 A boy reaches for an empty plastic soda bottle while gathering recyclable materials floating along with garbage in Manila bay on July 14, 2009. (Photo by Erik de Castro/Reuters) 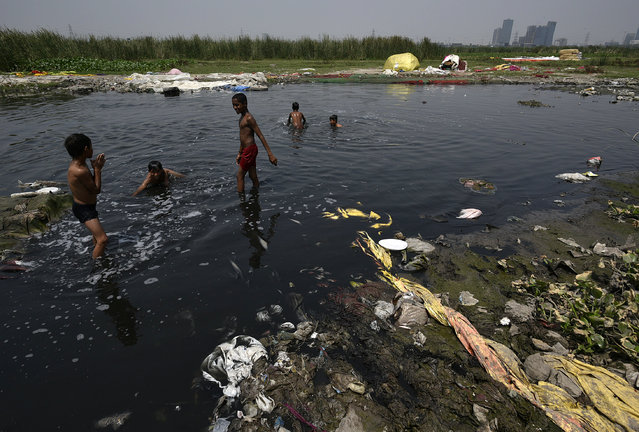 Children take bath in a dirty creek on the banks of Yamuna, near Okhla on June 4, 2019 in New Delhi, India. World Environment Day is marked anually on June 5. (Photo by Biplov Bhuyan/Hindustan Times via Getty Images) 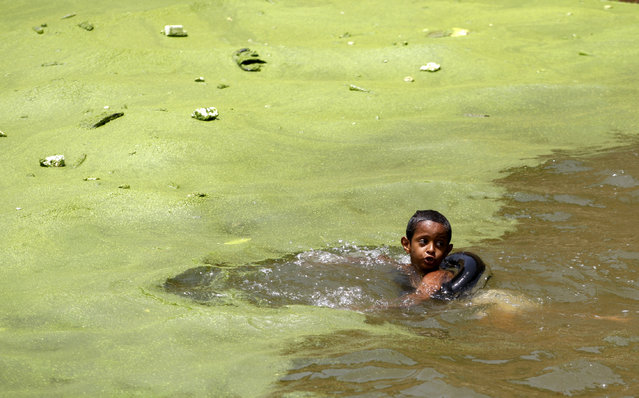 A boy swims in polluted water to beat the heat in the western Yemeni city of Hajja on June 9, 2010. (Photo by Khaled Abdullah/Reuters) 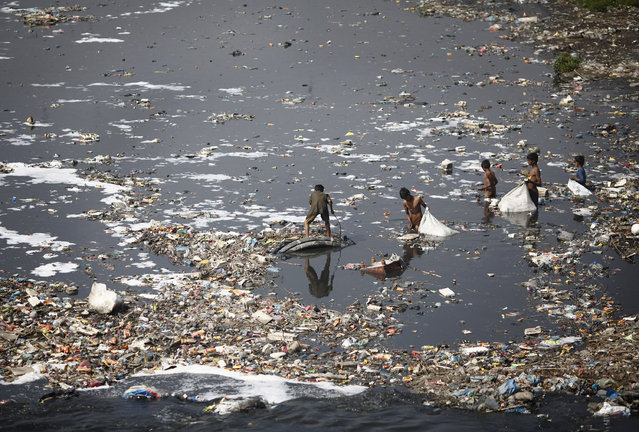 Children look for plastic bottles at the polluted Bagmati River in Kathmandu, Nepal on March 22, 2013. This year's theme for World Water Day, which falls on March 22, is “Water Cooperation” and is in line with the celebration of the International Year of Water Cooperation. (Photo by Navesh Chitrakar/Reuters) 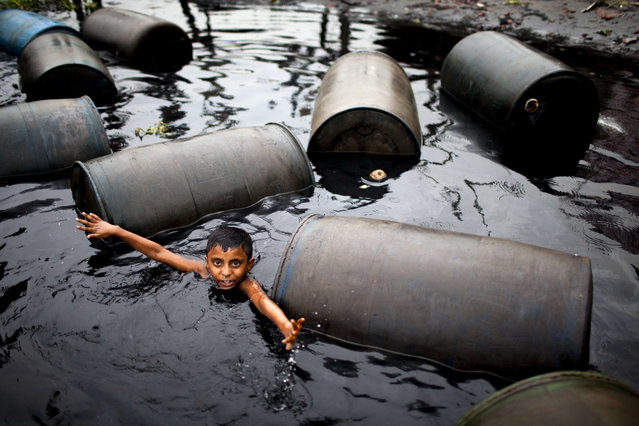 Boy swim in the toxic water full of discarded oil tanks in the River Buriganga, Dhaka, Bangladesh on May 29, 2017. The river water is extremely polluted. Sewage from the city, oil spills from boats and chemicals from industry have all led to pollution of the water. (Photo by K.M. Asad/LightRocket via Getty Images) 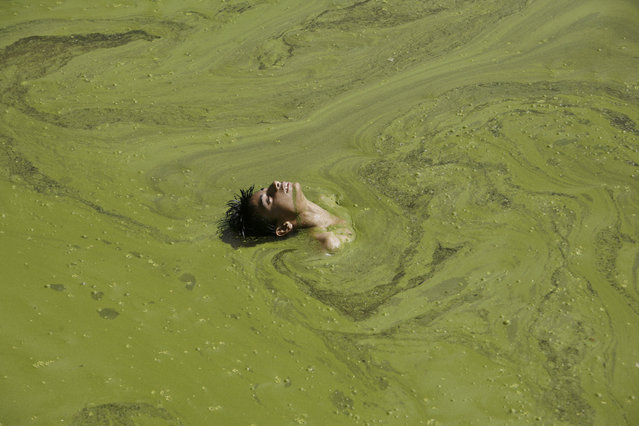 A boy swims in a pond on the outskirts of Jammu, India on June 5, 2007. (Photo by Amit Gupta/Reuters) 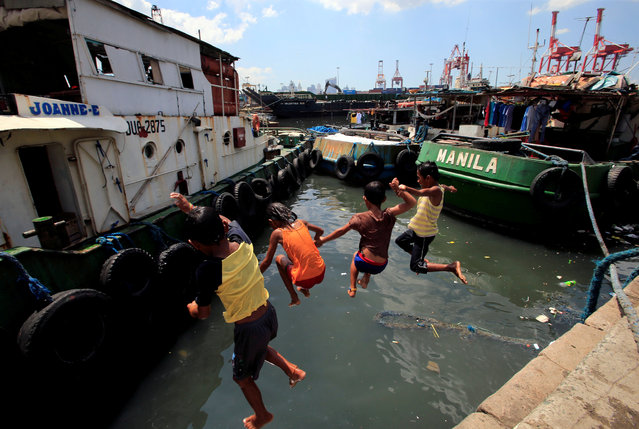 Children jump into the polluted waters of the Manila bay to cool off from the intense heat within the slum area of the Baseco compound in Tondo city, metro Manila, Philippines on April 30, 2018. (Photo by Romeo Ranoco/Reuters) 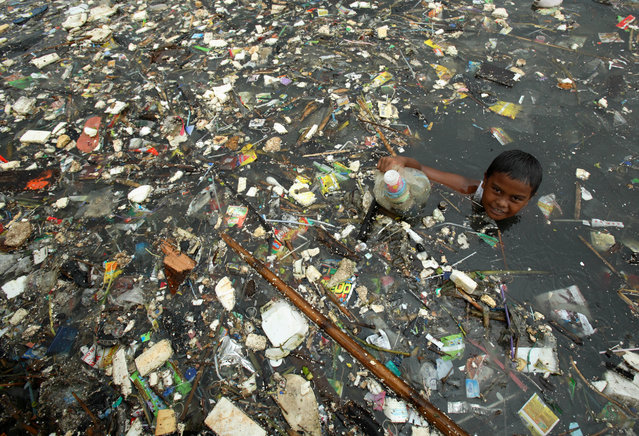 A boy collects plastic for resale at Marunda beach in Jakarta, Indonesia on February 1, 2007. The Intergovernmental Panel on Climate Change (IPCC) will release a long-awaited report assessing the human link to pollution, global warming and climate change in Paris on February 2, 2007. A draft of the report, which draws on research by 2,500 scientists from more than 130 countries, projects a big rise in temperatures this century and warns of more heatwaves, floods, droughts and rising sea levels linked to greenhouses gases released mainly by the use of fossil fuels. (Photo by Reuters/Beawiharta) Iraqi teenagers swim in waste water from the nearby Tuweitha nuclear facility near Baghdad, Iraq on May 28, 2003. Iraqis are consuming contaminated water unaware of the dangerous pollutants that can cause severe ill health. (Photo by Damir Sagolj/Reuters) 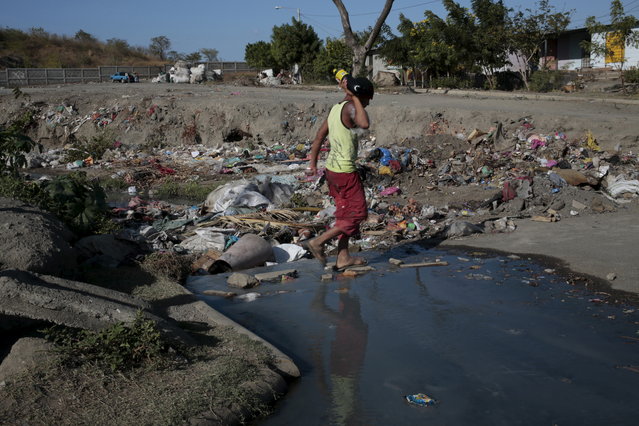 A boy walks over a polluted canal at outskirts of Managua, Nicaragua on January 27, 2016. Nicaraguan government spokeswoman Rosario Murillo announced on Thursday of a new positive case of Zika in Managua city, bringing confirmed cases in the country to three. (Photo by Oswaldo Rivas/Reuters) 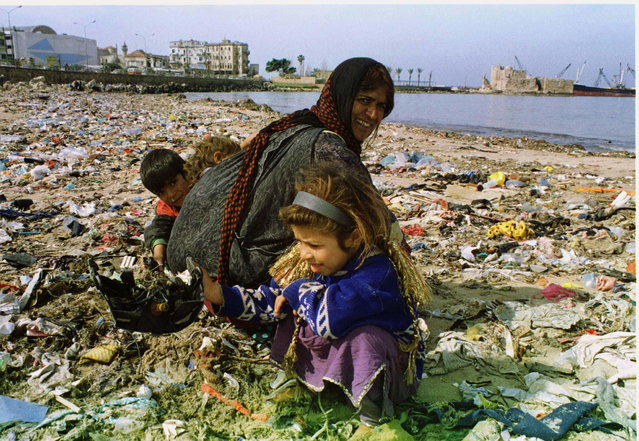 A Lebanese gypsy woman and her children search in the rubbish at the beach of the port city of Sidon, March 2. Tonnes of garbage were thrown across the sandy beach by high waves over the weekend. (Photo by Reuters/Stringer) 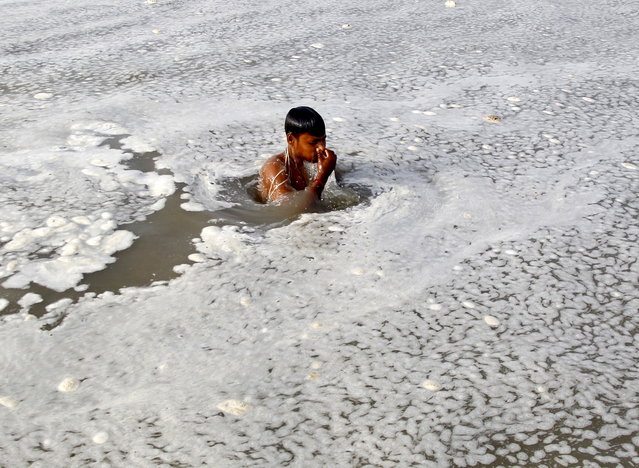 A Hindu devotee takes a dip in the polluted water of the Ganges river in Allahabad, India, July 5, 2015. (Photo by Jitendra Prakash/Reuters) 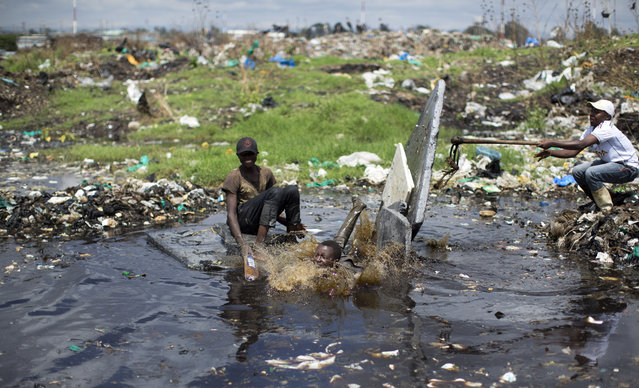 In this photo taken Thursday, November 12, 2015, a boy who scavenges for a living dives off the makeshift raft he and his friends have made for fun, into a dark and polluted pool of water left by recent rains, at the garbage dump in the Dandora slum of Nairobi, Kenya. Men, women and children traipse through the murky sludge that weaves through mountains of garbage in Nairobi's notorious Dandora dump, hunting for anything that can be recycled to earn themselves enough for their daily bread – some of the poorest of Kenya's poor and those likely to be on Pope Francis' mind when he makes his first trip to Africa this week and brings his message of environmental stewardship and care for society's most marginal. (Photo by Ben Curtis/AP Photo) 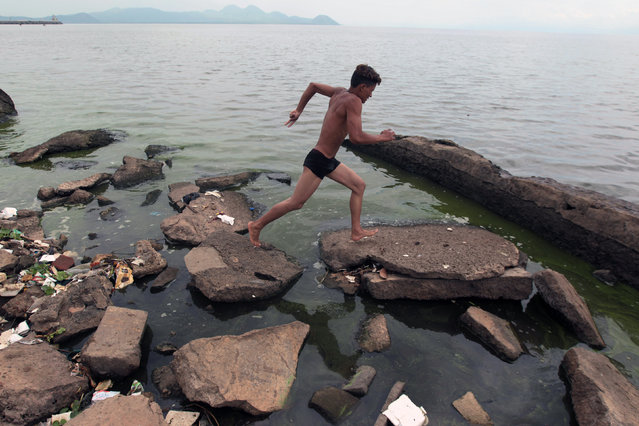 A boy runs as he prepares to jump into the polluted waters of Lake Xolotlan in Managua, Nicaragua on June 5, 2013. The World Environment Day is celebrated annually on June 5 to raise awareness about environmental issues and stimulate political action, according to the United Nations Environment Programme. (Photo by Oswaldo Rivas/Reuters) 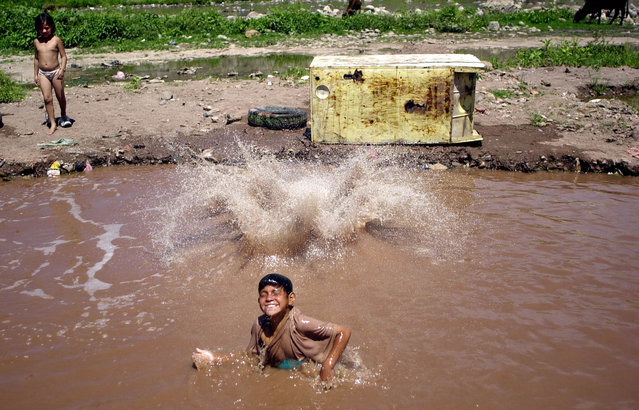 Children play in water near the Choluteca River to cool off from the high temperatures in Tegucigalpa, Honduras Tuesday, March 4, 2003. The Choluteca is the most polluted river in the country. (Photo by Ginnette Riquelme/AP Photo)
Edit Del
24 Jun 2019 00:05:00, post received 0 comments
Publication archive:
←   →
Popular tags:
All tags
Last searches: