Sad Chris Hondros Retrospective Part 2
Chris Hondros, a Getty Images photographer, was fatally wounded on April 20, 2011, in a mortar attack by government forces while covering the civil war in Libya. Hondros' work is woven in our history as he covered everything from politics to marathons. A new film will focus on his life as told through his images. Here's a look at some of his finest and final work. Some of these images are graphic in nature 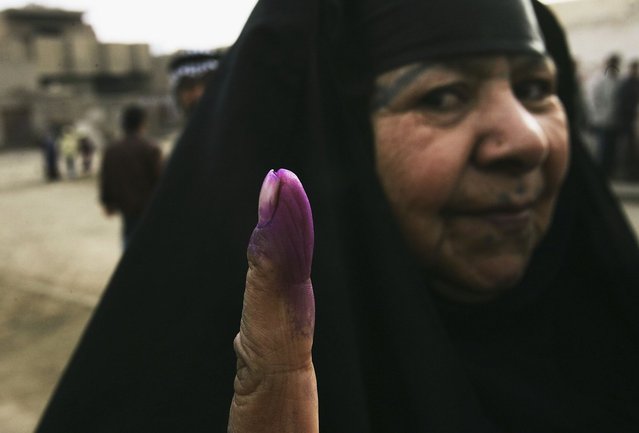 BAGHDAD, IRAQ - JANUARY 2005: A woman displays her ink-stained finger outside a polling station after voting on Election Day in the Sadr City neighborhood of Baghdad January 30, 2005 in Baghdad, Iraq. Iraq 's first multiparty elections in half a century began at 7am on Sunday. (Photo by Chris Hondros/Getty Images) BALA MURGHAB, BADGHIS PROVINCE. AFGHANISTAN - JUNE 2010: Village elders sit before the start of a shura meeting with local Afghan government officials and officers from the US Army's 82nd Airborne Division June 29, 2010 in Bala Murghab, Afghanistan. The 82nd Airborne along with NATO Italian troops have been working for nearly a year in this combative zone in the far northwest of the country near the Turkmenistan border, attempting to pacify and extend the Afghanistan central government rule to this rural and fiercely independent area rife with Taliban insurgents. (Photo by Chris Hondros/Getty Images) 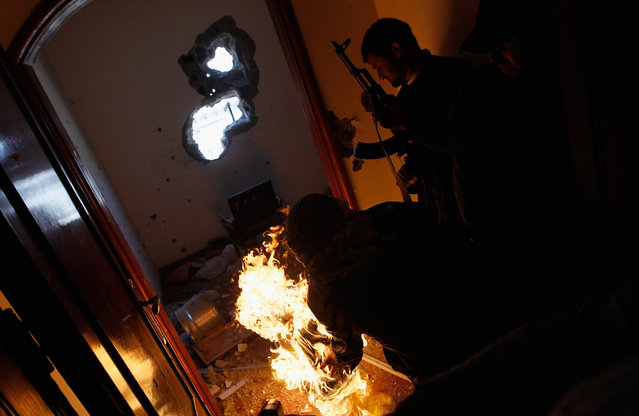 MISRATA, LIBYA - APRIL 2011: Libyan rebel fighter rolls a burning tire into a room containing ensconced government loyalist troops who were firing on them during house-to-house fighting on Tripoli Street in downtown Misrata April 20, 2011 in Misrata, Libya. Rebel forces assaulted the downtown positions of troops loyal to Libyan strongman Moammar Gaddafi April 20, briefly forcing them back over a key bridge and trapping several in a building that fought back instead of surrendering, firing on the rebels in the building and seriously wounding two of them during the standoff. Fighting continued between Libyan government forces that had surrounded the city and anti-government rebels ensconced there. (Photo by Chris Hondros/Getty Images) 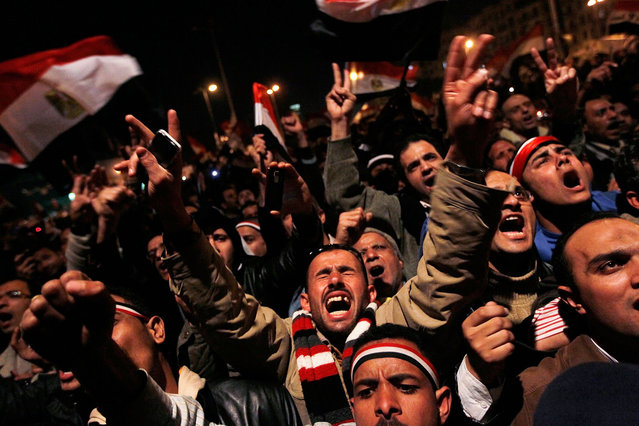 CAIRO, EGYPT - FEBRUARY 2011: Anti-government protesters rally after a speech by Egyptian President Hosni Mubarak in Tahrir Square February 10, 2011 in Cairo, Egypt. President Hosni Mubarak made a statement saying that he had given some powers to his vice President but would not resign or leave the country, leaving a crowd of anti-government protesters disappointed and furious after early reports he might step down. (Photo by Chris Hondros/Getty Images) 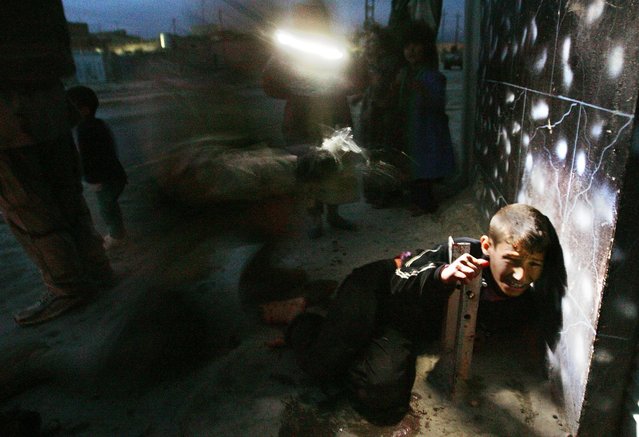 TAL AFAR, IRAQ - JANUARY 2005: Rakan Hassan, then 11, is treated by a medic seconds after being accidentally shot by U.S. soldiers January 18, 2005 in Tal Afar, Iraq. Racan's parents were shot and killed and he was gravely wounded in the incident in the restive northern Iraqi city. The incident was widely publicized, and ultimately led to Racan's treatment in Boston. With nerve damage to his abdomen and spine, doctors thought Racan might never walk again, but an intensive physical therapy regimen has brought back the use of his legs and he can now walk with assistance. Racan was returned to Iraq with his siblings. (Photo by Chris Hondros/Getty Images) NEW YORK, NY - SEPTEMBER 2010: People stand around a reflecting pool in the middle of Ground Zero before the annual memorial service September 11, 2010 in New York City. Thousands will gather to pay a solemn homage on the ninth anniversary of the terrorist attacks that killed nearly 3,000 people on September 11, 2001. (Photo by Chris Hondros/Getty Images) 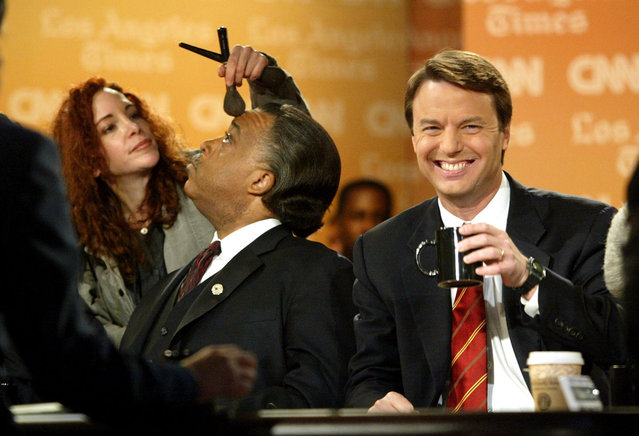 LOS ANGELES, CA - FEBRUARY 2004: U.S. Senator John Edwards (D-NC) (R) smiles as a make up artist applies make up to the face of Rev. Al Sharpton at the beginning of a debate at the University of Southern California February 26, 2004 in Los Angeles, California. Edwards, Sharpton, U.S. Senator John Kerry (D-MA) and U.S. Congressman Dennis Kucinich (D-OH) are all taking part in the debate. (Photo by Chris Hondros/Getty Images) 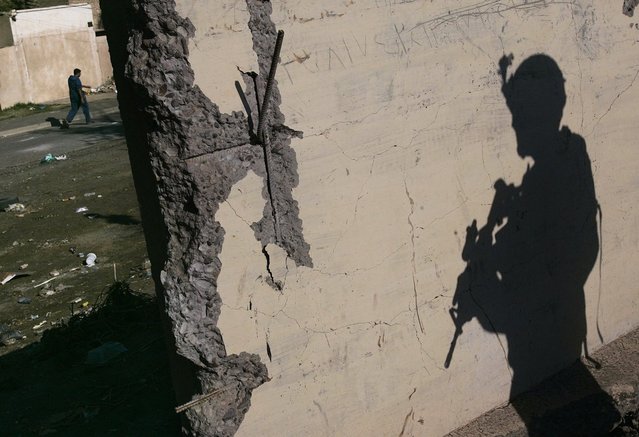 BAGHDAD, IRAQ - DECEMBER 2006: A US Army soldier with Task Force Dagger stands watch while a man passes by in the distance on December 1, 2006 in the Hurriyah neighborhood of Bagdhad, Iraq. Hurriyah has been the site of violent incidents in recent weeks, including alleged sectarian mosque burnings and the killing of an U.S. Army colonel by a roadside bomb, one of the highest ranking American deaths in the Iraq war. (Photo by Chris Hondros/Getty Images) 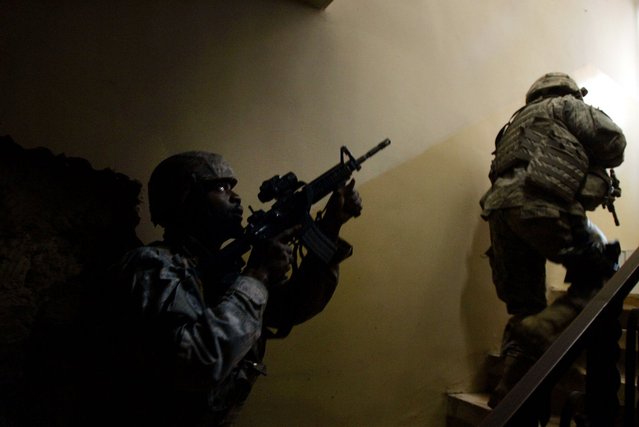 BAGHDAD, IRAQ - FEBRUARY 2007: U.S. Army 1st Cavalry Division soldiers of the Charlie Co. 2-12 Cav climb stairs in a building as they look for a sniper that had shot at them minutes before February 8, 2007 in the violent Gazaliyah neighborhood of Baghdad, Iraq. Snipers are a daily problem for US and Iraqi Army soldiers who patrol the neighborhood, which is beset with Sunni-Shia sectarian violence. (Photo by Chris Hondros/Getty Images) 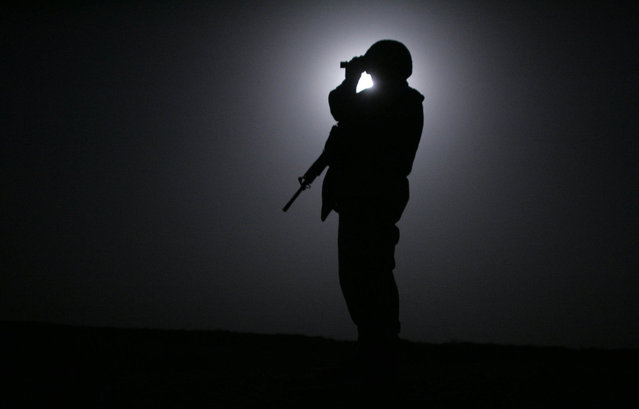 ANBAR PROVINCE, IRAQ - JUNE 2005: A Marine from the 3rd Battalion, Fourth Marines scans the horizon with night vision goggles while silouetted by the moon during midnight patrol around Camp Mercury, the former Camp Abu Ghraib, June 23, 2005 in Anbar province, Iraq. Marines from the 3/4 embark on risky night patrols around their base in one of Iraq's most dangerous zones to prevent attacks and keep insurgents at bay. (Photo by Chris Hondros/Getty Images) 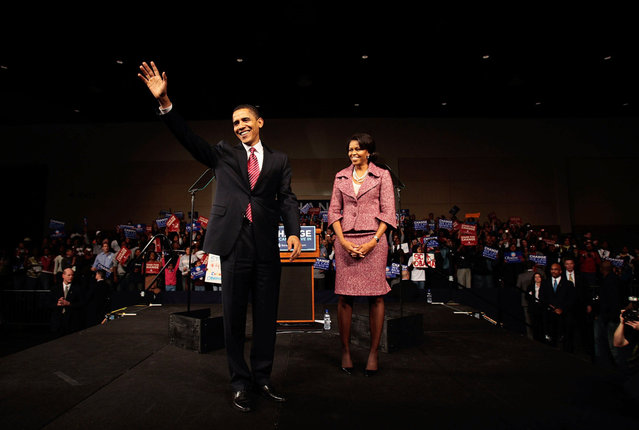 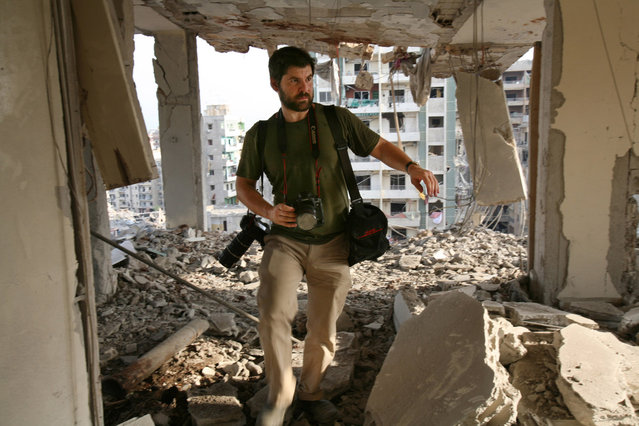 BEIRUT, LEBANON - Getty Images photographer Chris Hondros walks the ruins of a building August 21, 2006 in southern Beirut, Lebanon. Hondros, who was on assignment in Misrata, Libya, was killed on April 20, 2011 by a rocket-propelled grenade (RPG). (Photo by Getty Images) 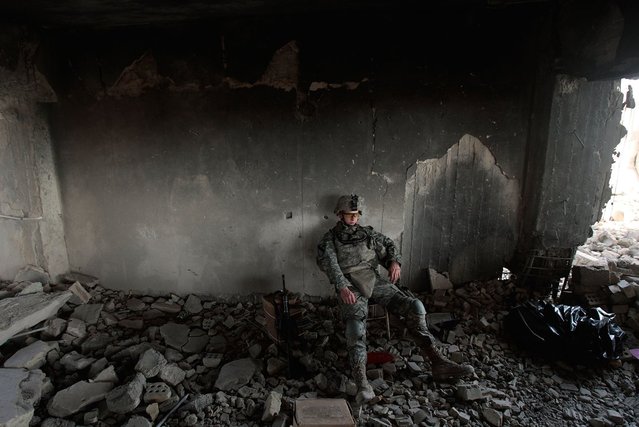 BAGHDAD, IRAQ - JULY 2007: Pft. Daniel Sims of Clemson, South Carolina of the 1st Battalion, 5th Cavalry Regiment of the U.S. Army sits during watch duties in a partially destroyed building that's being converted to an Army field post July 13, 2007 in the tense Amariyah neighborhood of Baghdad, Iraq. Insurgents who were in control of Amariyah until recently attempted to destroy this building and an adjacent bunker with explosives and burning tires, but the Army was able to salvage the compound and is now occupying it. (Photo by Chris Hondros/Getty Images) 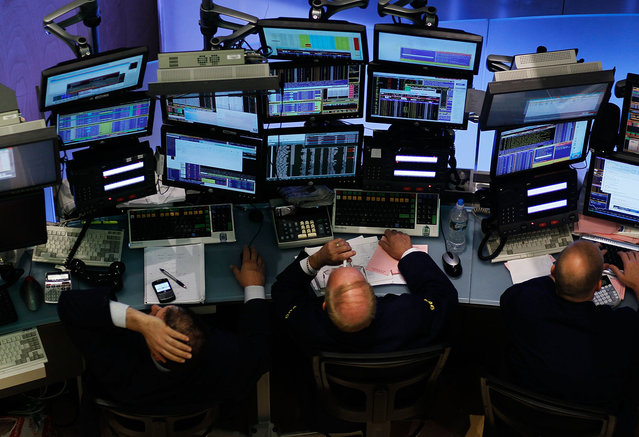 NEW YORK, NY - MAY 2010: Financial professionals work at stations on the floor of the New York Stock Exchange in the middle of the trading day May 20, 2010 in New York City. Stocks dropped today over concerns that debt involved with Europe's bailout plan could slow a global recovery. (Photo by Chris Hondros/Getty Images) 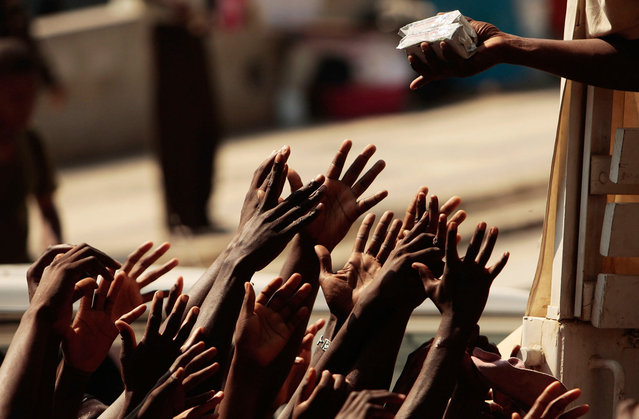 PORT AU PRINCE, HAITI - JANUARY 2010: Haitians reach out for relief supplies from the World Food Program January 20, 2010 in Port-au-Prince, Haiti. Aid has started trickling out to Haitians devastated by last weeks earthquake that ravanged the country, though many fear not enough will reach desparate citizens in time to prevent humanitarian catastrophe. (Photo by Chris Hondros/Getty Images) 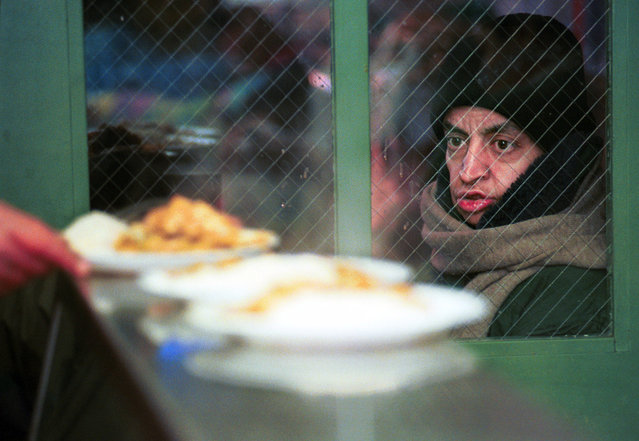 NEW YORK CITY, NY - DECEMBER 2000: A homeless woman eyes hot meals lined up in the soup kitchen of Trinity Lutheran Parish church December 28, 2000 before a lunchtime meal in New York City. Trinity Church runs a program called Shelter and Food for the Homeless, which serves a daily meal to homeless people in the area. (Photo by Chris Hondros/Newsmakers)