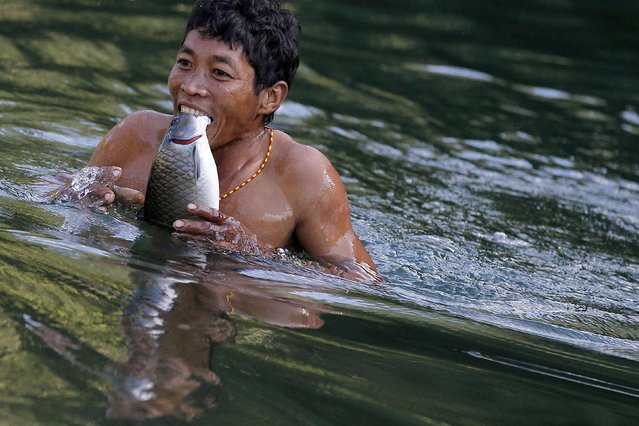 A Naga man carries fish in his teeth after it was stunned by dynamite, which fishermen threw in a creek between Donhe and Lahe township, in the Naga Self-Administered Zone in northwest Myanmar December 27, 2014. (Photo by Soe Zeya Tun/Reuters)
Details
11 Jan 2015 13:18:00,post received 0 comments
Touching “Sadhu” Project by Photographer Denis Rouvre 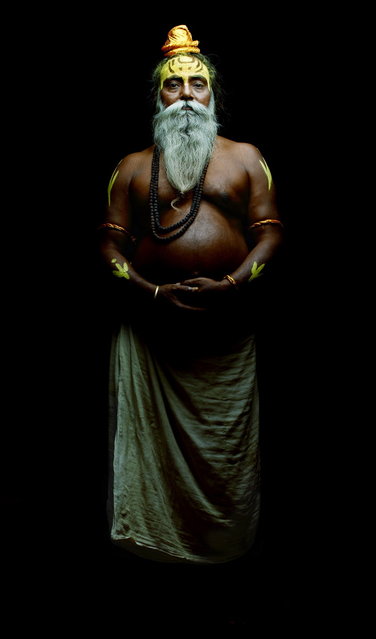 “They’ve been obsessing me for years. I searched and found them in Benares, on the banks of the river Gange (India). They arrive here to get rid of everything and to wait for death. This existence can last for years, sometimes decades, almost a life. Opposite to mine, well organised and filled as a human life can be, to try in vain to push the limits of its end”. – Denis Rouvre. (Photo by Denis Rouvre)
Details
15 Dec 2013 11:12:00,post received 0 comments
Fact A Look at Life in India 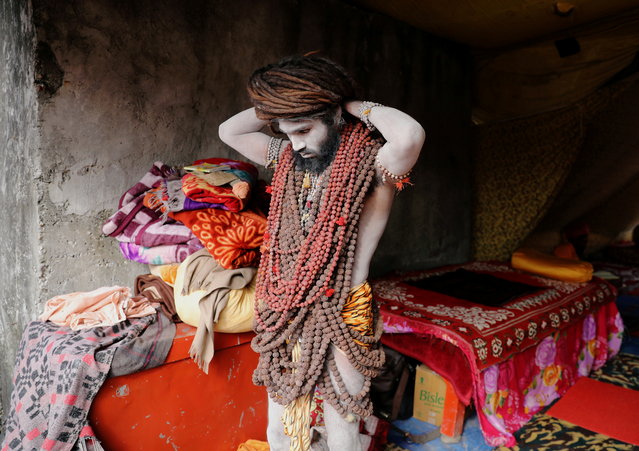 A Naga Sadhu or Hindu holy man adjusts the beads around his neck ahead of the first Shahi Snan at “Kumbh Mela” or the Pitcher Festival, in Haridwar, India, March 10, 2021. (Photo by Anushree Fadnavis/Reuters)
Details
15 Mar 2021 10:15:00,post received 0 comments
Fact Makar Sankranti Festival 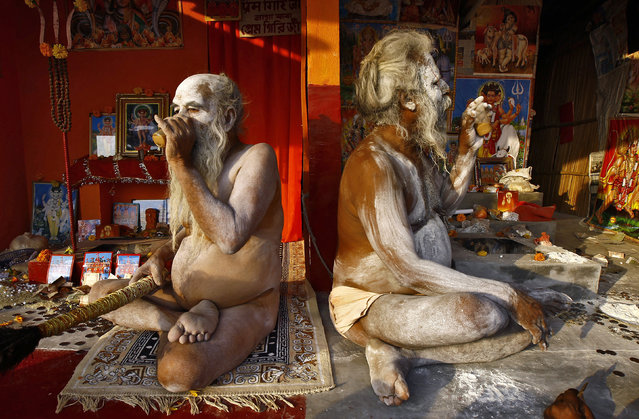 Naga Sadhus or Hindu holy men, smeared with ash, drink tea inside their makeshift camps near the confluence of river Ganges and the Bay of Bengal, ahead of Makar Sankranti festival at Sagar Island, south of Kolkata January 13, 2015. Hindu monks and pilgrims are making their annual trip to Sagar Island for the one-day festival of “Makar Sankranti” on Wednesday. (Photo by Rupak De Chowdhuri/Reuters)
Details
14 Jan 2015 12:22:00,post received 0 comments
Fact India last Week 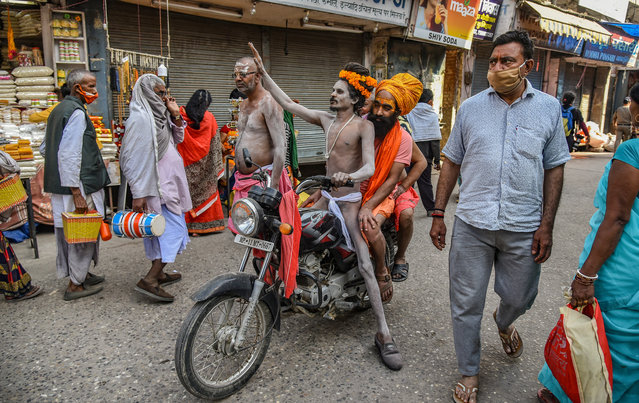 Indian holy men, or Naga Sadhu, ride a motorbike on their way to take a holy dip in the Ganges River during the Kumbh Mela at Haridwar, Uttarakhand, India, 14 April 2021. Thousands of pilgrims gather for the mass Hindu pilgrimage which occurs every twelve years and rotates among four locations. (Photo by Idrees Mohammed/EPA/EFE)
Details
16 Apr 2021 09:41:00,post received 0 comments
Fact A Look at Life in India 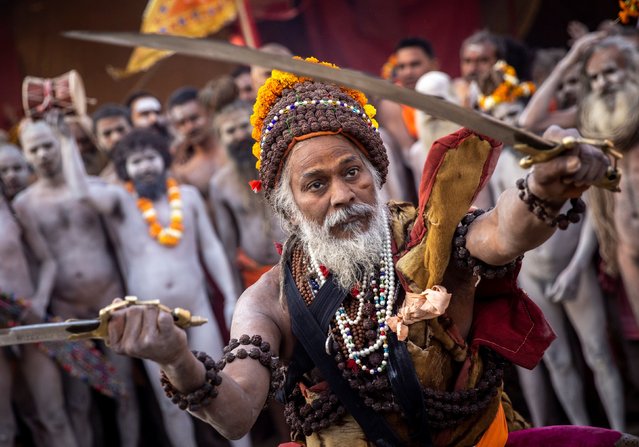 Naga Sadhus, or Hindu holy men, participate in the procession for taking a dip in the Ganges river during Shahi Snan at “Kumbh Mela”, or the Pitcher Festival, amidst the spread of the coronavirus disease (COVID-19), in Haridwar, India, April 12, 2021. (Photo by Danish Siddiqui/Reuters)
Details
14 Apr 2021 10:58:00,post received 0 comments
Fact Kumbh Mela 2019 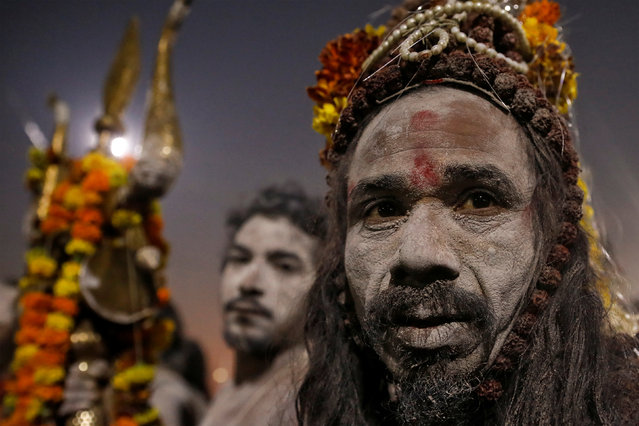 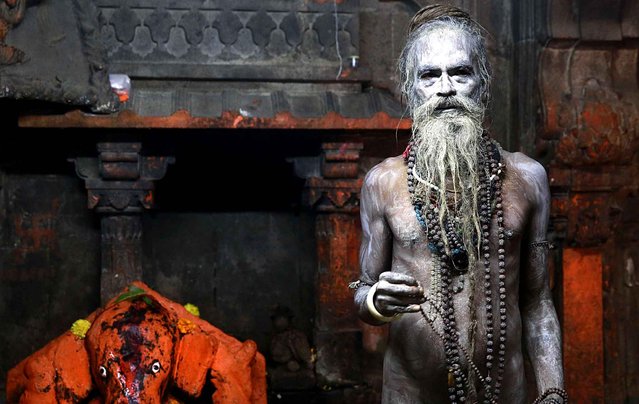 A Naga sadhu, or naked Hindu holy man, poses for a picture after taking a holy dip in the Godavari River during Kumbh Mela, or Pitcher Festival, at Trimbakeshwar in Nasik, India, Sunday, September 13, 2015. Hindus believe taking a dip in the waters of a holy river during the festival, will cleanse them of their sins. According to Hindu mythology, the Kumbh Mela celebrates the victory of gods over demons in a furious battle over a nectar that would give them immortality. (Photo by Rafiq Maqbool/AP Photo)
Details
14 Sep 2015 13:31:00,post received 0 comments
Popular tags:
All tags
Last searches: