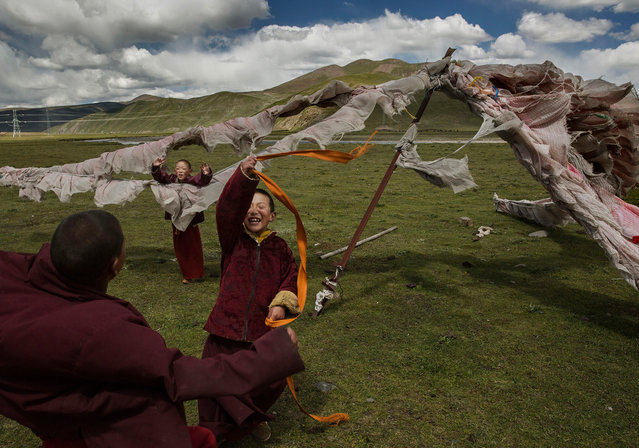 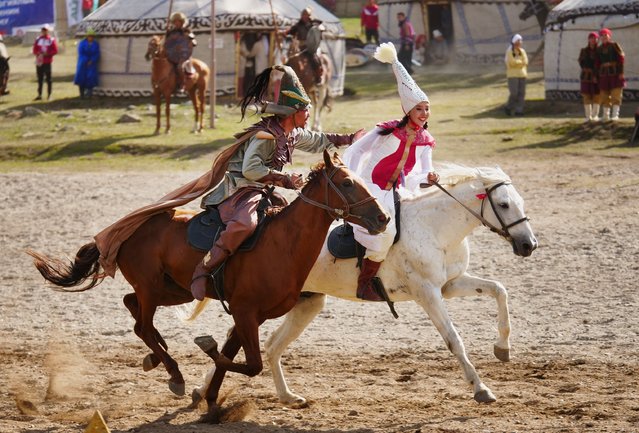 A traditional game that earned hollers from the crowd saw a male rider gallop after a young woman, stretching for a kiss. Only a handful of the men managed the risky peck before the young women turned the tables and thundered after the men with whips in hand. (Photo by Amos Chapple/Radio Free Europe/Radio Liberty)
Details
06 Sep 2018 00:01:00,post received 0 comments
Wow A Wooden e-Bike 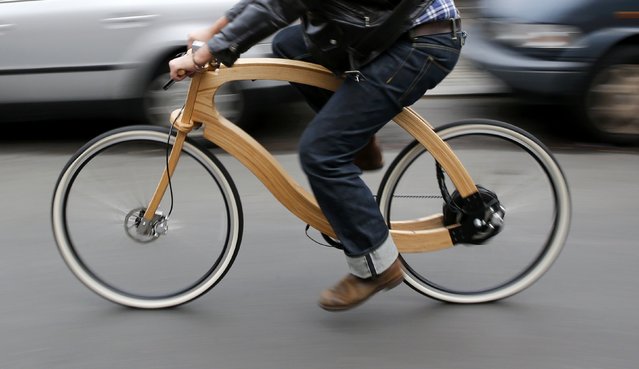 Matthias Broda, inventor and designer of the wooden e-bike, cycles a prototype along a street in Berlin, November 20, 2014. The wooden e-bike produced by German company Aceteam from ash wood, will be launched on the market by spring 2015 and will cost around 3,950 euro (4,950 dollars). The e-bike will be equipped with an 250W e-bike motor for a range of up to 100 kilometer (62 miles) with a rechargeable battery. (Photo by Fabrizio Bensch/Reuters)
Details
21 Nov 2014 13:02:00,post received 0 comments
Fact World Nomad Games in Kyrgyzstan 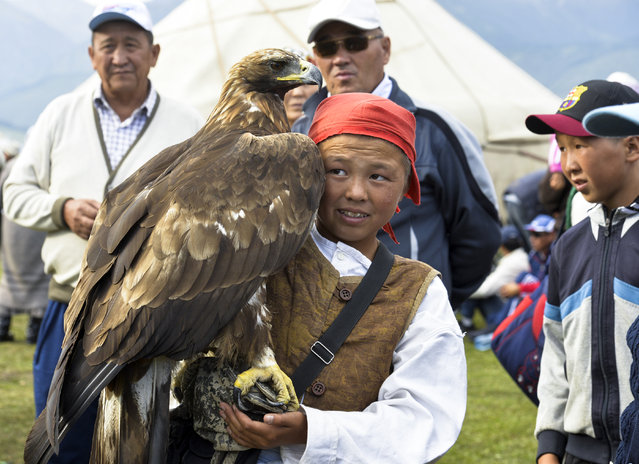 In this photo taken on Sunday, September 4, 2016, a Kyrgyz boy holds a golden eagle during the second World Nomad Games at Issyk Kul lake in Cholpon-Ata, Kyrgyzstan. The Games, which opened on Saturday on a picturesque mountain plain in eastern Kyrgyzstan, bring together athletes from 40 countries including Russia and the United States where nomadic traditions are strong. (Photo by Vladimir Voronin/AP Photo)
Details
07 Sep 2016 10:14:00,post received 0 comments
Fact Real-life Wall-E 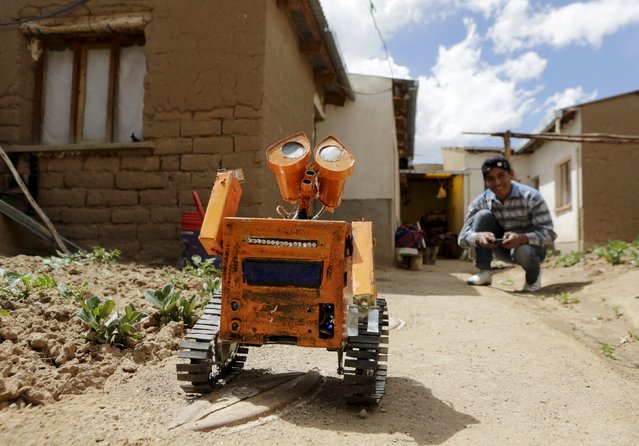 A replica of the Wall-E character is remotely controlled with a mobile phone by Bolivian student Esteban Quispe, 17, in Patacamaya, south of La Paz, December 10, 2015. Quispe built the Wall-E robot using materials he obtained from a rubbish dump in the town located in the Andean highland region. He hopes to mechanize agriculture in Patacamaya by making use of robots that operate on solar energy, Quispe told Reuters. (Photo by David Mercado/Reuters)
Details
13 Dec 2015 08:05:00,post received 0 comments
Fact E-Waste Problem 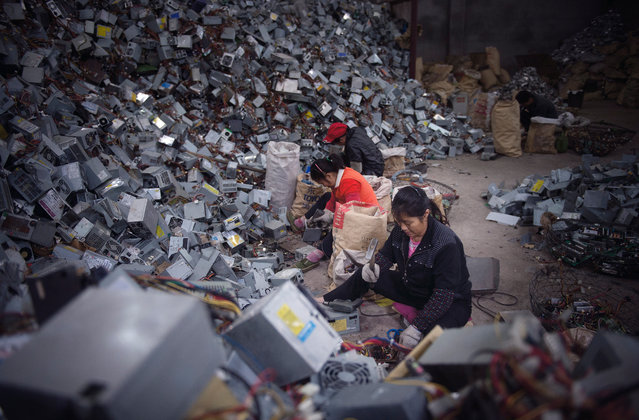 Sustainable development goal target 12.5 is to reduce waste. But with a planet increasingly dependent on technology, is that even possible? As of today, over 30m tonnes of electronic waste has been thrown out so far this year, according to the World Counts. Most e-waste is sent to landfills in Asia and Africa where it is recycled by hand, exposing the people who do it to environmental hazards. Kai Loeffelbein’s photographs of e-waste recycling in Guiyu, southern China show what happens to discarded computers. (Photo by Kai Loeffelbein/laif Agentur)
Details
19 Oct 2016 12:14:00,post received 0 comments
Fact Colombia's Last Nomadic Tribe 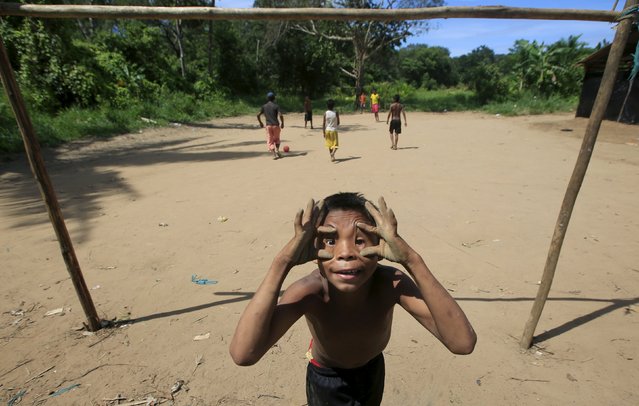 A Colombian Nukak Maku Indian boy gestures in a refugee camp at Agua Bonita near San Jose del Guaviare of Guaviare province September 3, 2015. Since emerging from the jungle in 2005, half naked and carrying blowpipes, the Nukak have lived in settlements near the frontier town of San Jose del Guaviare, a humid outpost in the Amazon 400 km (250 miles) southeast of the capital Bogota. (Photo by John Vizcaino/Reuters)
Details
03 Oct 2015 08:01:00,post received 0 comments
Fact Inside Nomadic Siberian Tribe 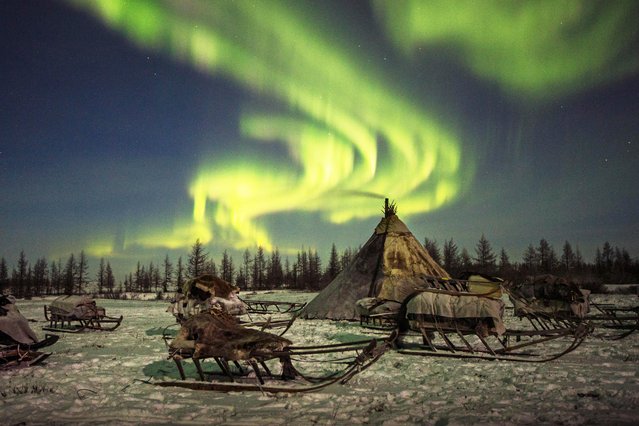 A British photographer has captured life at the “edge of the world”. Timothy Allen, best known for his work on BBC's Human Planet, trekked through the freezing Siberian wilderness for 16 days as he joined part of an 800km migration of reindeer in the Yamal-Nenets region – a name that roughly translates to “edge of the world”. The stunning pictures feature the nomadic Nenets tribe, who drink blood to survive in -45°C temperatures. Timothy's epic journey, which will be revealed in an eight-minute documentary on Animal Planet USA, saw him travel across the bleak terrain of the frozen Ob River with the Nenets people in December last year. Here: An empty camp is shown beneath a colourful sky in Siberia, December 2016. (Photo by Timothy Allen/Barcroft Productions)
Details
19 Sep 2017 07:48:00,post received 0 comments
Popular tags:
All tags
Last searches: