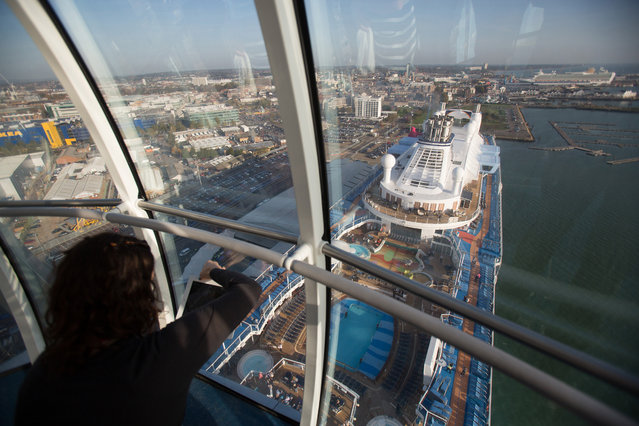 A visitor takes a photograph from the North Star observation capsule onboard the cruise ship Quantum of the Seas which is currently docked at Southampton on October 31, 2014 in Southampton, England. Billed as the world's first smartship, Royal Caribbean's Quantum of the Seas is claimed to be the most high-tech cruise ship in the world, with high tech modifications such as virtual balconies in windowless rooms and features such as the first dodgem ride on water, and a skydiving simulator. The ship will shortly begin its voyage from Southampton, where it docked earlier this week, to New York before relocating to the Caribbean for the 2014-15 season. (Photo by Matt Cardy/Getty Images)
Details
11 Nov 2014 11:44:00,post received 0 comments
Fact (scowling) Good morning, bastards. Sincerely, Avax
Details
13 May 2012 21:37:00,post received 0 comments
Charming Flags make up test
Details
03 Sep 2012 08:36:00,post received 0 comments
Funny Be Safe!