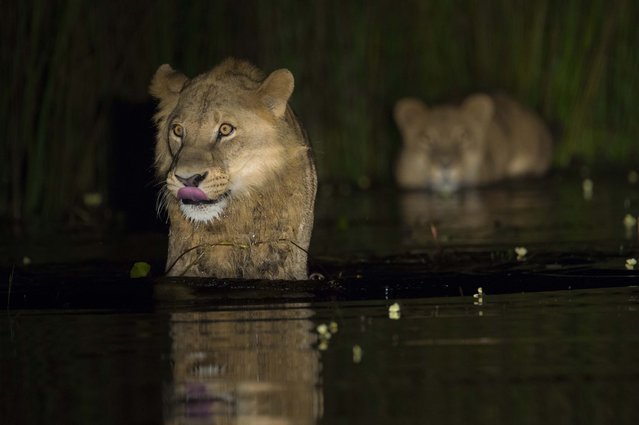 These breath-taking photographs reveal the everyday lives of animals living in the wild. The incredible images were taken by wildlife photographer Wim van dan Heever, from Pretoria, South Africa, during trips to locations including Japan, Botswana and Svalbard. The 43-year-old has been photographing wildlife since he was a young boy and turned his passion for animals into a career and set up ODP Safaris. He has travelled across the globe to photograph wild animals – from lions and tigers, to elephants, dolphins and eagles – as they hunt, give birth and graze in their natural habitats. Here: Lions submerged in water. (Photo by Wim van den Heever/Caters News)
Details
07 Aug 2015 11:43:00,post received 0 comments
Touching Wildlife Alaska 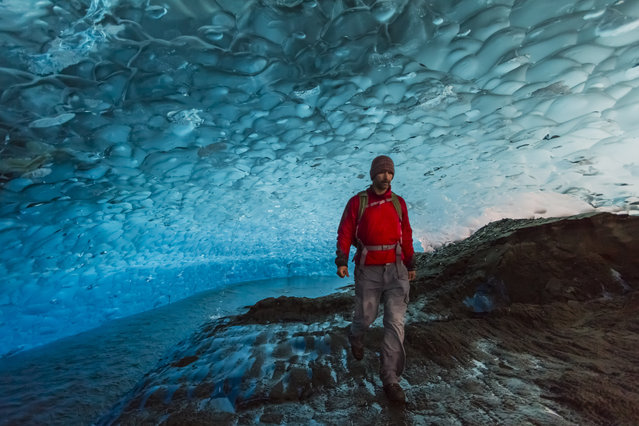 Daniel Fox inside the Mendenhall Glacier, in September 2014, in Juneau, Alaska. Driving in an open-roofed jeep is no longer the fashionable way to see wildlife – as this adventurer shows. A keen wildlife photographer has circled islands in the south of Alaska, the United States, in a kayak to see spectacular scenery and animals. Daniel Fox, 40, from San Francisco spent three months travelling around the islands by kayak, meeting sea lions and brown bears along the way. (Photo by Daniel Fox/Barcroft Media)
Details
14 Sep 2014 10:46:00,post received 0 comments
Touching Gamekeeper “Shoots” Wildlife 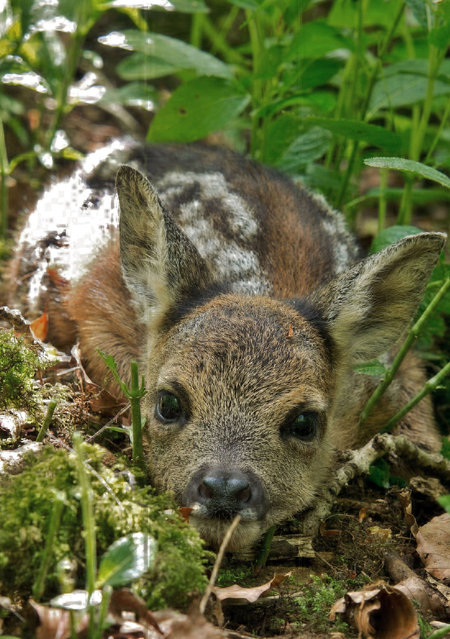 Cotswold gamekeeper shoots amazing pictures of British wildlife – without the aid of long lenses and elaborate techniques. The photos may look like they have been shot from miles away – but amazingly Adam Tatlow is actually just feet away from his wild subjects. Photo: Young fawn shelters in the wood. He is so at one with nature that he knows how to call animals to him, and often gets within 30ft of them. (Photo by Adam Tatlow/BNPS)
Details
24 Sep 2013 08:31:00,post received 0 comments
Sad Photographers against Wildlife Crime 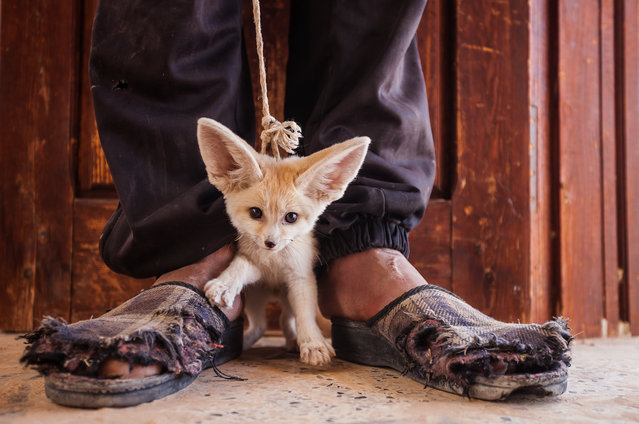 In a new project, an international group of photographers have joined forces to use their powerful images to raise awareness and funds to help stop the illegal wildlife trade. Here: Fennec foxes are captured for the illegal pet trade. This three-month-old pup was for sale in a market in southern Tunisia. (Photo by Bruno D'Amicis/Photographers Against Wildlife Crime/Wildscreen/The Guardian)
Details
17 Oct 2017 06:05:00,post received 0 comments
Touching Wildlife of the Farne Islands 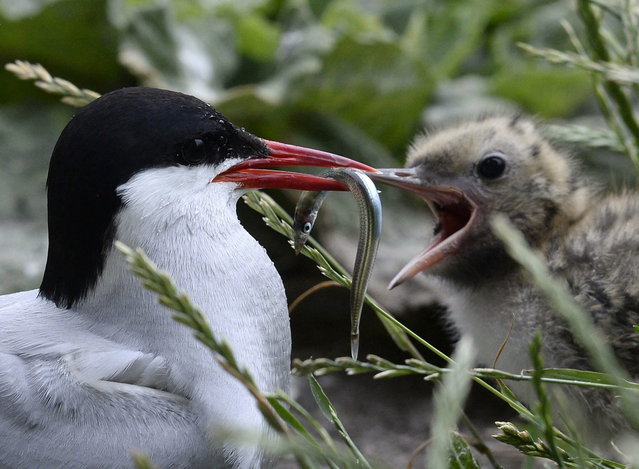 An arctic tern feeds its chick on the Farne Islands off the Northumberland coast, northern England July 8, 2013. The Farne Islands, which lie off the coast of northeast England, are home to a huge array of wildlife. The islands are owned and protected by the British conservation charity, the National Trust, which says they host some 23 species of seabird, as well as a substantial colony of grey seals, who come to have their pups there in the autumn. Every five years the National Trust carries out a census of the islands' population of puffins, and this year's survey showed there were almost 40,000 nesting pairs on the islands – an 8 percent rise from 2008. (Photo by Nigel Roddis/Reuters)
Details
11 Dec 2013 09:21:00,post received 0 comments
Charming Wildlife Photographer of the Year 2017 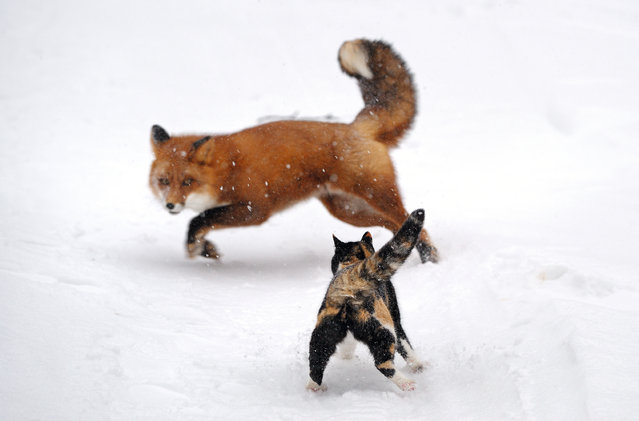 Respect, Kronotsky nature reserve, Russia. The photographer’s cat, Ryska – her name means little lynx in Russian – stands outside their cabin and with aggressive posturing warns off a fox. In winter, foxes would regularly visit the cabin searching for food. If one peered in at the window, possible when the snow was deep, Ryska would sit on the other side, fur raised, and growl. When outside, she would hold her ground. The foxes were not always frightened and so encounters could be a sort of dance. (Photo by Igor Shpilenok/Unforgettable Behaviour/NHM)
Details
08 Apr 2017 09:14:00,post received 0 comments
Fact Wildlife from a Toy Car 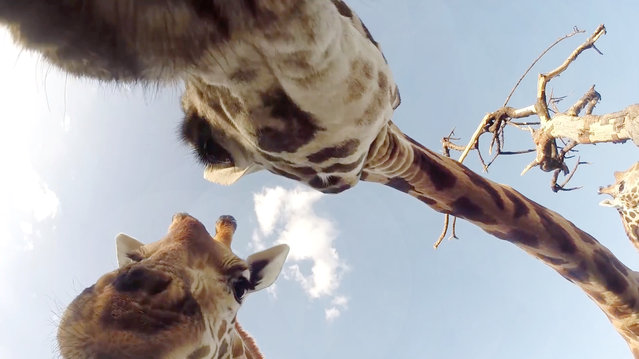 An innovative photographer attached a camera to a remote-controlled car, allowing him to capture angles of wild lions, rhinos and other animals. Over the last 11 years, Chris Bray has been taking pictures of animals using his toy car contraption while he takes guests on photography tours in Kenya. (Photo by Chris Bray/Caters News Agency)
Details
25 Oct 2019 00:01:00,post received 0 comments
Charming Wildlife At Farne Islands 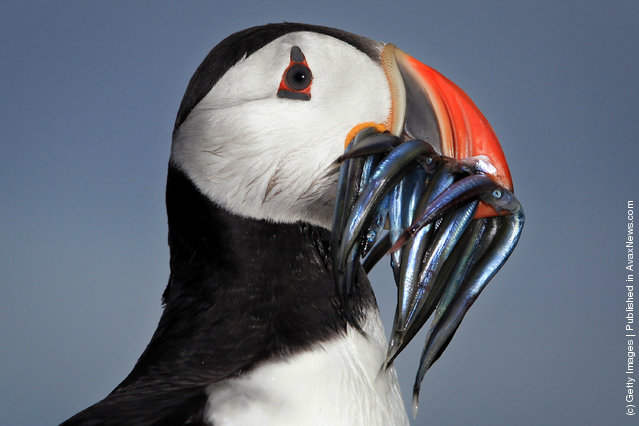 A Puffin returns to it's nest with a beak full of sand eels on June 25, 2011 on Inner Farne, England. The Farne Islands, which are run by the National Trust, are situated two to three miles off the Northumberland coastline. The archipeligo of 16-28 separate islands (depending on the tide) make the summer home to approximately 100,000 pairs of breeding seabirds including around 36,000 Puffins, 32,000 Guillemots and 2,000 pairs of Arctic Terns. The species of birds which nest in internationally important numbers include Shag, Sandwich Tern and Arctic Tern. The coastline around The Farnes are also the breeding ground to one of Europe's largest Grey Seal colonies with around 4,000 adults giving birth to 1500 pups every year. (Photo by Dan Kitwood/Getty Images)
Details
27 Jun 2011 12:58:00,post received 0 comments
Popular tags:
All tags
Last searches: