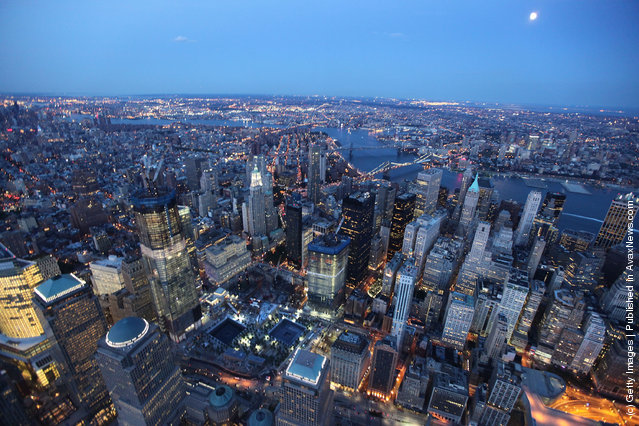 Construction continues on One World Trade Center (TALLEST BUILDING AT LOWER LEFT) as the memorial footprints of the twin towers are seen (BOTTOM C) on August 12, 2011 in New York City. Upon completion, One World Trade Center will be New York's tallest skyscraper, topping out at a symbolic 1,776 feet, with 3 million square feet of office space. More than 2,700 people were killed when al-Qaeda terrorists hijacked U.S. passenger jets and flew them into the twin towers of the World Trade Center on September 11, 2001. Nearly ten years after the crippling attacks on Lower Manhattan, business, tourism and new construction like One World Trade Center have rejuvenated the formerly devastated cityscape.(Photo by Mario Tama/Getty Images)
Details
14 Aug 2011 13:58:00,post received 0 comments
Fact Bangladesh Leather Trade 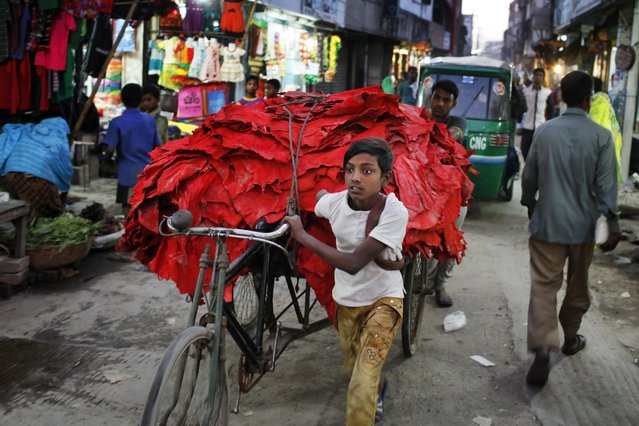 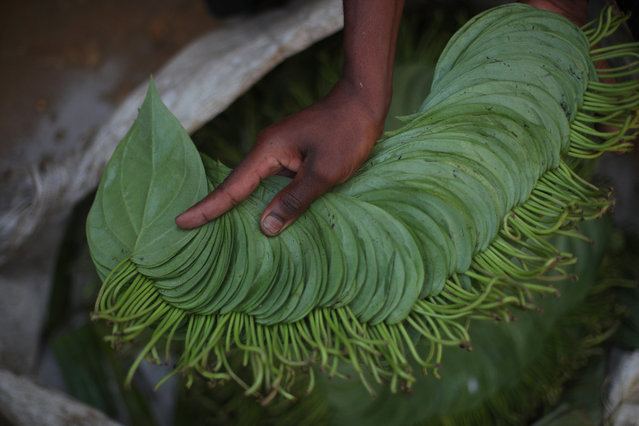 Faruk, 17, a Rohingya refugee trader holds betel leaves which are on sale at a stall in Palong Khali refugee camp near Cox's Bazar, Bangladesh, November 3, 2017. He left his village in Myanmar when the military opened fire towards the Rohingya. “I buy this betel leaf from Palong Khali market, in one bundle there are 160 pieces, I buy it for 80 taka and I sell it for 100 taka (1 Bangladeshi Taka = 0.012 US Dollar). Bangladeshi's and I sell for the same rate in the camp. Outside in the local market it is 80 taka per bundle. My problem is that I don't have money so I can't buy anything to eat, I can't buy fish to eat”, he said. (Photo by Hannah McKay/Reuters)
Details
27 Nov 2017 08:54:00,post received 0 comments
Fact Skin Trade in Indonesia 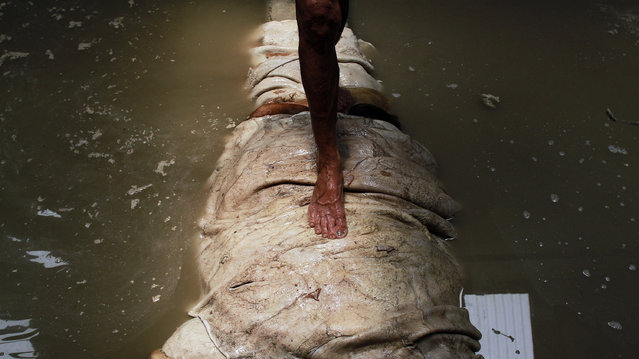 Sukaregang in Garut district, West Java, has long been a bustling center for Indonesia's leather trade, with some shops producing and selling various goods – including bags, shoes and jackets – since the 1940s. The industrial area is also a major supplier for high-end brands from across the globe, catering to the fashion, auto and motor-sports industry. Here: a man walks across a vat of water used to wash the hide. (Photo by Rezza Estily/JG Photo)
Details
31 Mar 2015 13:29:00,post received 0 comments
Sad China's Fur Trade 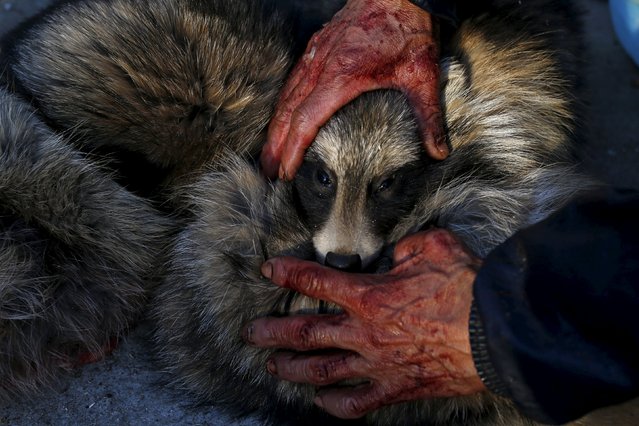 A worker holds the head of a fox while killing it with electricity for its fur at a fox farm in Nanzhuang village, Shandong province, China, December 11, 2015. There are over 60 households in the village still raising foxes, raccoon dogs and other animals for the fur trade. China is the world's largest fur producer and exporter, according to state media. (Photo by William Hong/Reuters)
Details
16 Dec 2015 08:03:00,post received 0 comments
Fact Inside Berlin’s Erotica Trade Fair 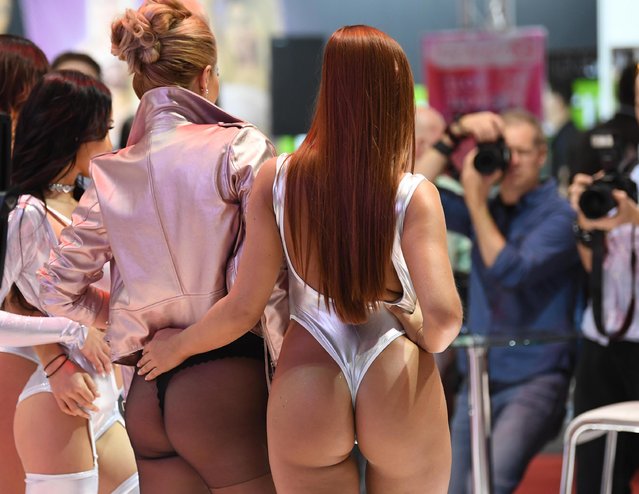 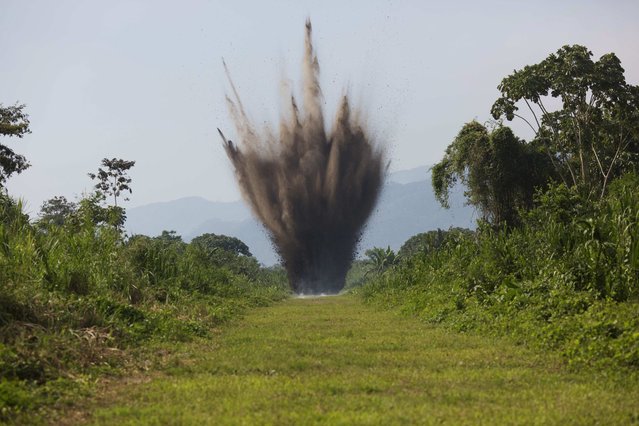 In this September 19, 2014 photo, explosives are detonate by Peruvian counternarcotics forces on a part of a clandestine grassy airstrip in the Apurimac, Ene and Mantaro River Valleys, or VRAEM, the world's No. 1 coca-growing region, in Ayacucho, Peru. The dynamiting of craters by Peruvian security forces into clandestine airstrips cuts into profits but hardly discourages cocaine traffickers who net tens of thousands of dollars with each flight flown from these airstrips. (Photo by Rodrigo Abd/AP Photo)
Details
23 Sep 2014 12:56:00,post received 0 comments
Touching IFA 2011 Consumer Technology Trade Fair 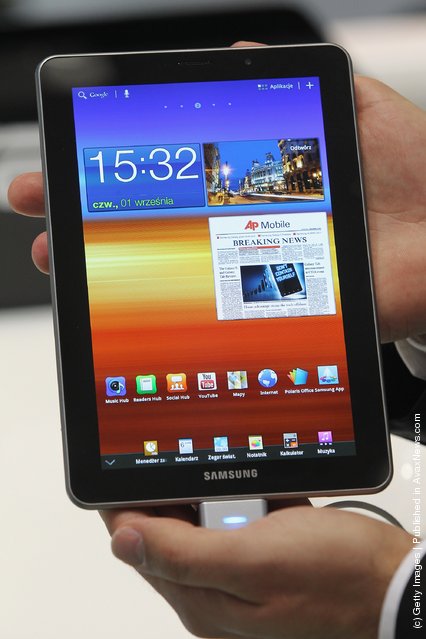 The photographer holds up a Samsung Galaxy Tab 7.7 tablet at the Samsung hall at the IFA 2011 consumer electonics and appliances fair the day before the fair's official opening on September 1, 2011 in Berlin, Germany. The IFA 2011 will be open to the public from September 2-7. (Photo by Sean Gallup/Getty Images)
Details
03 Sep 2011 12:34:00,post received 0 comments
Popular tags:
All tags
Last searches: