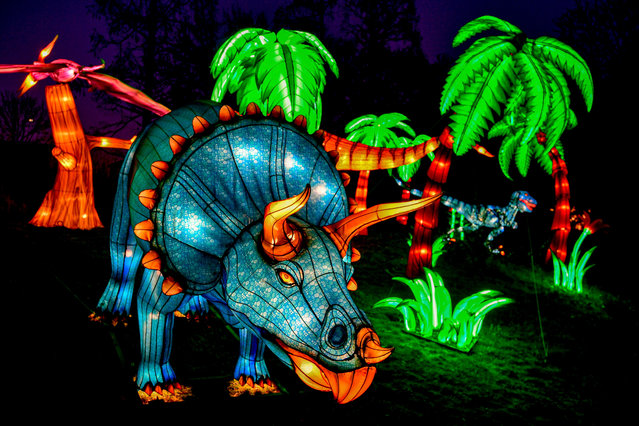 Light sculptures glow in the dark at the zoo in Cologne, Germany, 04 December 2019. The artworks are on display at the zoo as part of the China Light Festival that runs until 09 January 2020 and features more than 70 light installations on the zoo grounds. (Photo by Sascha Steinbach/EPA/EFE)
Details
06 Dec 2019 00:03:00,post received 0 comments
Fact Rainbow Lights for Orlando 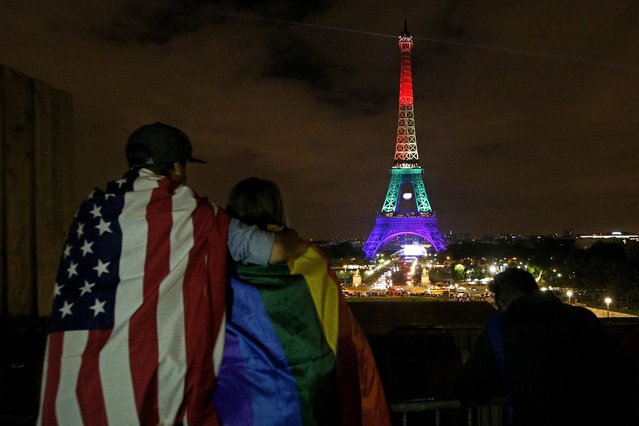 A couple covered with the US and the pride flags pay their tribute for the victims of a 12 June mass shooting in Orlando, Florida, USA, as they look at the Eiffel tower, illuminated in rainbow colours, in Paris, France, 13 June 2016. A total of 50 people including the suspect were killed and 53 were injured in a shooting attack at an LGBT club in Orlando, Florida, in the early hours of 12 June. The shooter was killed in an exchange of fire with the police after taking hostages at the club. (Photo by Yoan Valat/EPA)
Details
15 Jun 2016 15:03:00,post received 0 comments
Charming Hula Hoop Lightshow 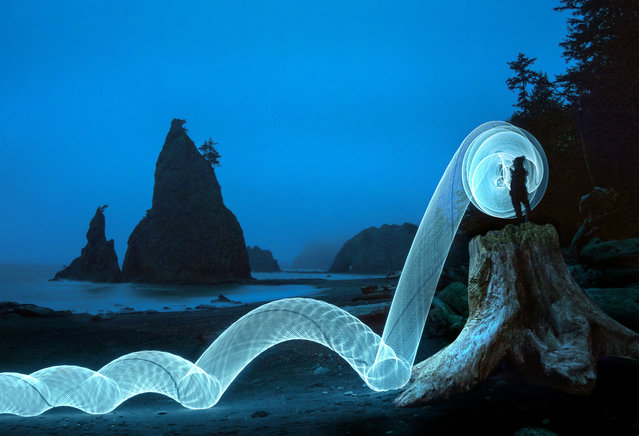 Well, this is hardly a waist of time! Here’s the couple who traveled the U.S. with an LED hula hoop – taking magnificent landscape photographs as they went. The brilliantly vibrant photographs show off the lights and colors of the lit-up hula hoop – with the strikingly serene American landscapes in the background. Grant Mallory, 25, from Columbus, Ohio, took pictures of his 23-year-old fiance hula-hooping in various national parks across the United States over the course of a three month road trip in the summer of 2015. Here: Magnificent pictures taken by Grant Mallory. (Photo by Grant Mallory/Caters News)
Details
25 Oct 2015 08:07:00,post received 0 comments
Touching Magical Fire and Ice Castle 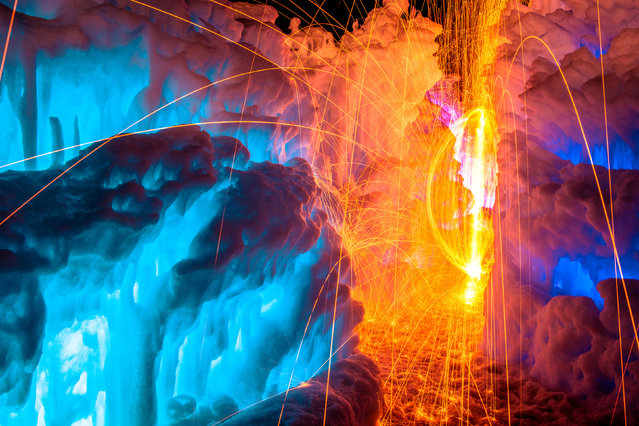 A photographer has discovered a spectacular way of keeping warm during winter – using fire to heat up icy locations. Sam Scholes uses long-exposures to capture the movement of fire in front of ice-covered backdrops. After lighting steel wool his friend Scott Stringham swings the flaming object in order to make swirling patterns. The result of this technique – captured at Midway Ice Castles in Utah is a vibrant image with the warm light dancing across the cold scenes. (Photo by Sam Scholes/Caters News)
Details
16 Jan 2015 13:13:00,post received 0 comments
Fact Holiday Decorations around the World 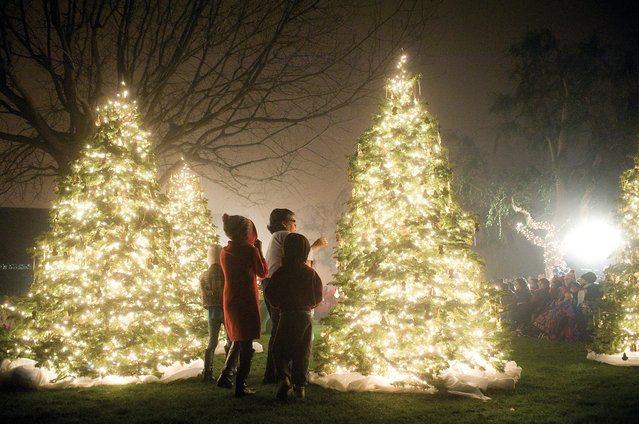 Community members look for the nameplates of their loved ones Tuesday, December 9, 2014 at Myers Funeral Service and Crematory in Porterville, Calif. during the 20th year of the memorial tree lighting. (Photo by Chieko Hara/AP Photo/The Porterville Recorder)
Details
22 Dec 2014 12:00:00,post received 0 comments
Charming Records Motion in Light by Stephen Orlando 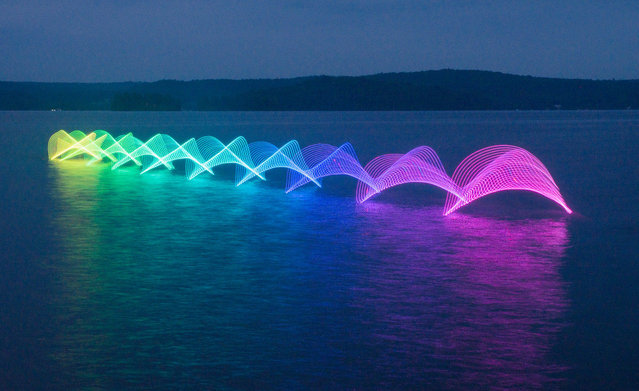 The mystifying flow of motion. We can rarely appreciate its beauty. Though there are ways to capture it on film, allowing us to marvel at its complexity. Stephen Orlando is a photographer who takes pleasure highlighting the magnificence of aquatic sports by using the brilliance of light. The beauty of the images that he creates comes not only from the composition of the photo, but also from the way Stephen managed to show the color transitions between each stroke of the kayaker. Even the rapids do not stand in the way of the marvelous dance of light. (Photo by Stephen Orlando)
Details
21 Dec 2014 10:57:00,post received 0 comments
Fact Crazy Robolights Art Installation in California 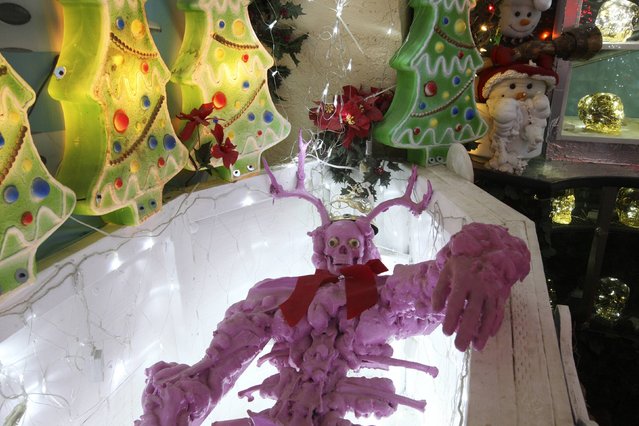 A creature bathes at the Robolights art installation by Kenny Irwin Jr. in Palm Springs, California December 15, 2014. The installation consists of hundreds of whimsical robot and other themed sculptures created from recycled materials including golf carts, kitchen appliances and microwaved smart phones, and is open to the public each holiday season on the sprawling Irwin family property. (Photo by David McNew/Reuters)
Details
18 Dec 2014 14:57:00,post received 0 comments
Touching Christmas Decorations in Germany 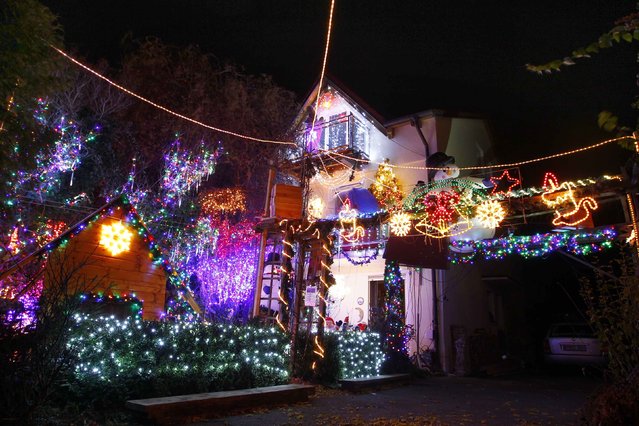 A house and garden is illuminated ahead of Christmas in Olching near Munich December 11, 2014. The house is decorated with more than 30,000 lights. Every year hundreds of houses across Germany are decorated by their owners with lights ahead of Christmas. (Photo by Michaela Rehle/Reuters)
Details
18 Dec 2014 14:17:00,post received 0 comments
Publication archive:
←   →
Popular tags:
All tags
Last searches: