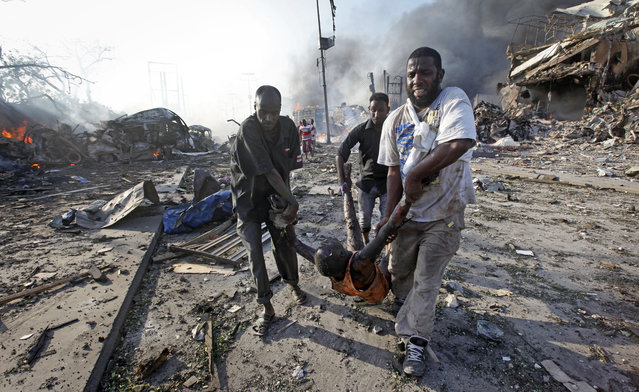 Somalis remove the body of a man killed in a blast in the capital Mogadishu, Somalia Saturday, October 14, 2017. A huge explosion from a truck bomb has killed at least 20 people in Somalia's capital, police said Saturday, as shaken residents called it the most powerful blast they'd heard in years. (Photo by Farah Abdi Warsameh/AP Photo)
Details
16 Oct 2017 08:57:00,post received 0 comments
Fact No Hope 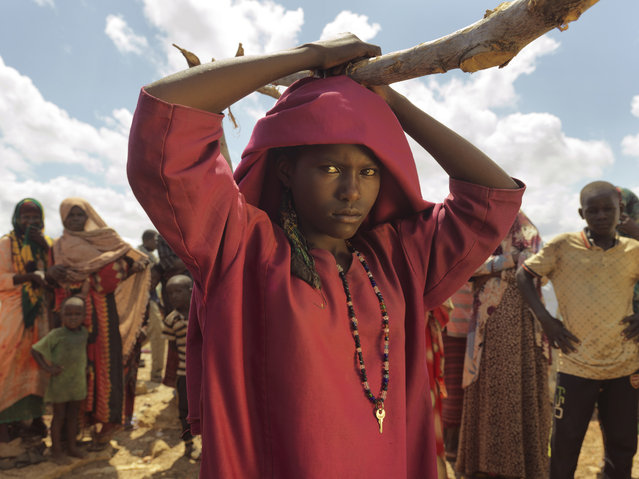 The worst drought in 40 years has a cruel grip on Somalia. A struggling young government and militant violence have compounded to bring crisis to 6.7 million lives. The town of Baidoa is facing some of the harshest conditions. Surrounded by territory controlled by al-Shabaab militants and amid ongoing attacks, 160,000 people have had to leave their farms and are surviving in camps where hunger, thirst and cholera await them. (Photo by Peter Caton/Mercy Corps)
Details
12 Aug 2017 05:47:00,post received 0 comments
Fact Devastating Drought in Somalia 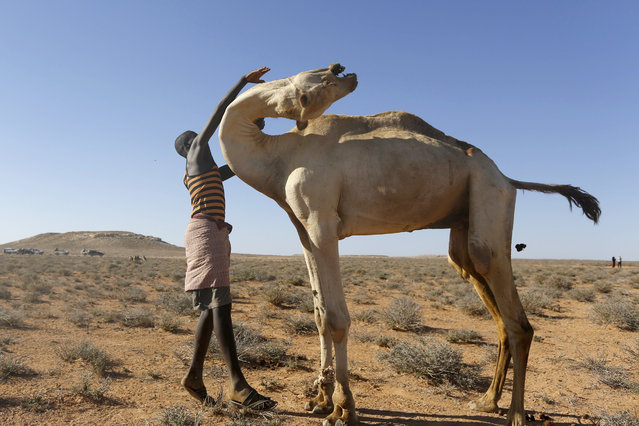 Ali Asair, who has left his family behind and traveled hundreds of kilometers in search for a pasture for his animals, attends to his camel in a pastoralists' settlement in the Bandarbeyla district in Somalia's semi-autonomous region of Puntland, Somalia, 24 March 2017. According to media reports, the United Nations says only 31 percent of 864 million US dollars appeal for a drought-hit Somalia is funded. The UN said the world is facing the largest humanitarian crisis since 1945, adding that more than 20 million people are facing the threat of famine in Somalia, Yemen, South Sudan and Nigeria and 1.4 million children could die from starvation this year. (Photo by Dai Kurokawa/EPA)
Details
28 Mar 2017 09:01:00,post received 0 comments
Fact Somalia Drought Crushes Herders' Lives 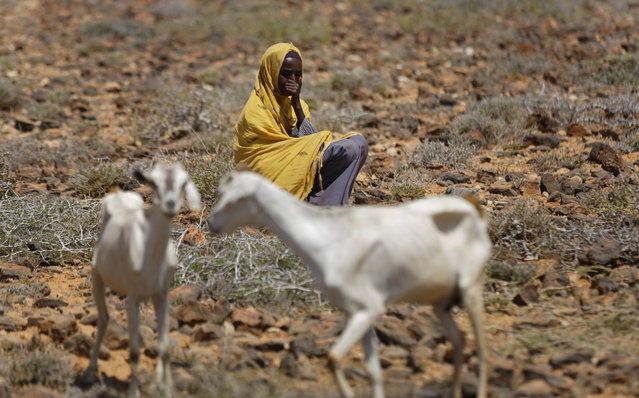 In this photo taken Wednesday, March 8, 2017, a woman herder sits with her goats in a remote desert area near Bandar Beyla in Somalia's semiautonomous northeastern state of Puntland. Somalia has declared the drought a national disaster, part of what the United Nations calls the largest humanitarian crisis since the world body was founded in 1945, and with animals being central to many the drought threatens their main sources of nutrition and survival. (Photo by Ben Curtis/AP Photo)
Details
15 Mar 2017 00:03:00,post received 0 comments
Fact Somali Elections 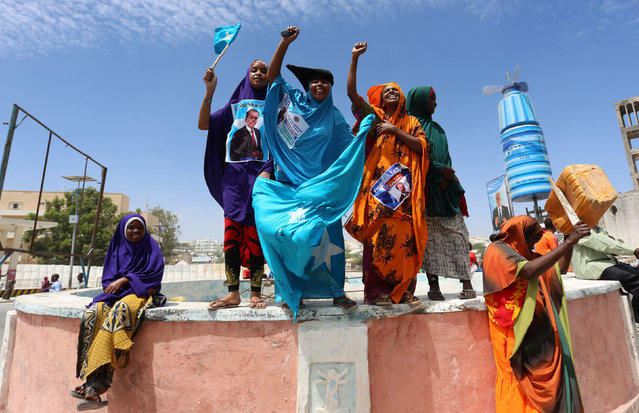 Somali women sing as they celebrate the election of President Mohamed Abdullahi Mohamed in the streets of Somalia's capital Mogadishu, February 9, 2017. This election is important because it may establish a pattern of peaceful change of government as well as continue to grow Somalia’s institutions especially for a country that has not heard a stable government for more than two decades. (Photo by Feisal Omar/Reuters)
Details
11 Feb 2017 00:04:00,post received 0 comments
Fact World’s Last Wild Frankincense Forests 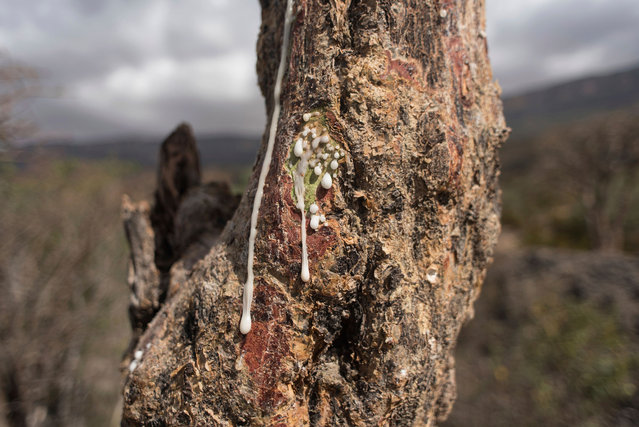 Sap runs out of a frankincense tree near Mader Moge, Somaliland, a breakaway region of Somalia on August 4, 2016In a tradition dating to Biblical times, men rise at dawn in the rugged Cal Madow mountains of Somaliland in the Horn of Africa to scale rocky outcrops in search of the prized sap of wild frankincense trees. (Photo by Jason Patinkin/AP Photo)
Details
27 Dec 2016 08:06:00,post received 0 comments
Fact Fishing Season in Somalia 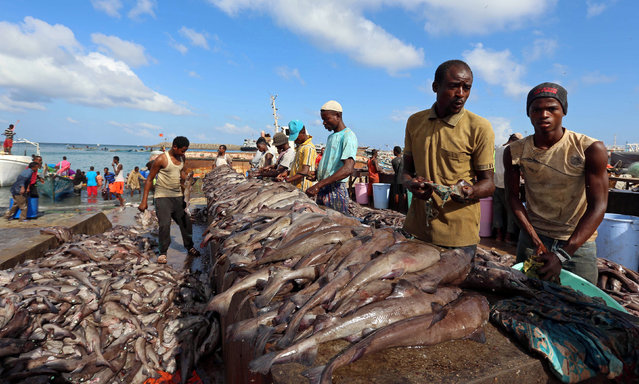 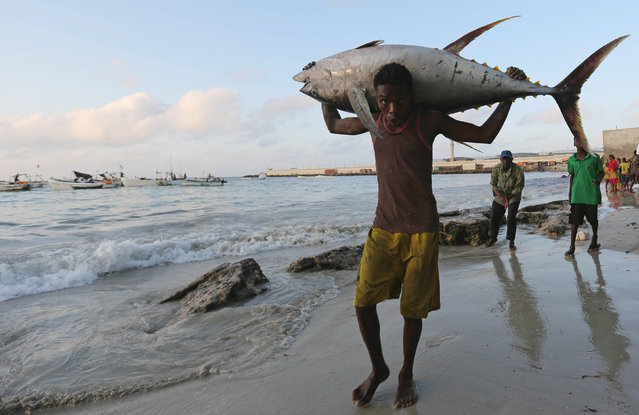 A Somali fisherman carries a fish from his vessel on the shores of the Indian Ocean on Liido beach, in Mogadishu, Somalia November 4, 2016. (Photo by Feisal Omar/Reuters)
Details
05 Nov 2016 12:59:00,post received 0 comments
Publication archive:
←   →
Popular tags:
All tags
Last searches: