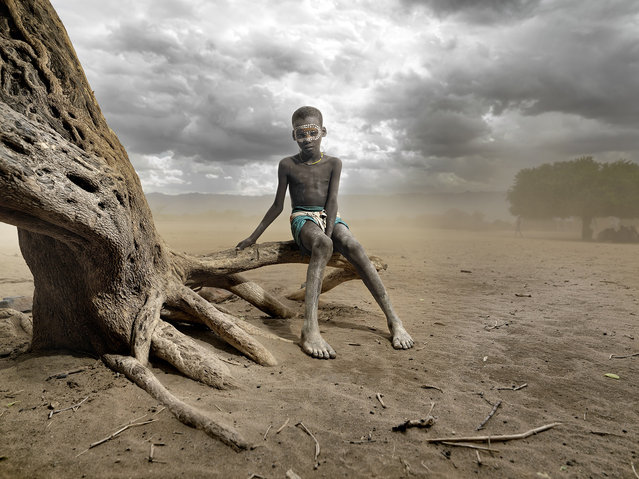 “Abore Sandstorm”. This picture was taken in Omo Valley, Ethiopia. My guide and I reached an Arbore village and while we are speakng with the boss I looked to my right and i saw a brown tsunami coming to us. It was an incredible moment, women protecting of the storm with their cloths and I closed my eyes. When I thought the storm was over I opened my eyes and I saw this boy seating on an old tree, I ran to catch this Arbore portrait with the queue of the sandstorm in his backside. (Photo and caption by Carlos Duarte (Spain)/2014 Sony World Photography Awards) “Sorrow”. The photograph was taken in one of the Moscow's theater called Teatr Mossoveta. Actress of this theater Lili Bolgashvili is in the picture. (Photo and caption by Eugene Stulov (Russia)/2014 Sony World Photography Awards) 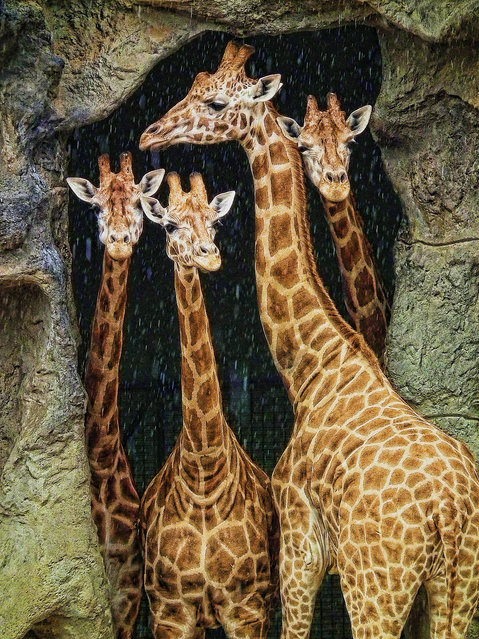 “Bonding”. This image was taken in Sydney Australia at the Toronga Zoo on sydney harbour. I was just watching the the giraffes walking around the enclosure they weren't doing anything very exciting and then it started to rain very heavily. I took cover so my gear and myself would not get wet and noticed the young giraffes run for the shelter of the cave and they were a bit digressed because there mother was not with them, so they were looking around for her, then I saw the mother just casually walk over to them to comfort them, it was such a beautiful moment to witness and I'm very lucky to have been there to capture it. (Photo and caption by Cory Kipa (New Zealand)/2014 Sony World Photography Awards) 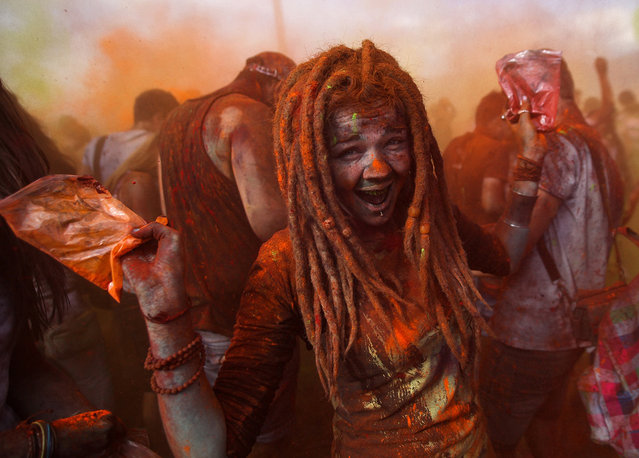 “The last summer day”. This photo was taken at the Paint Festival that took place in Novorossiysk, Russia on 31 August 2013. Before I saw many pictures from similar events and was really exited to take part in one. I was not so much interested in the throwing the paint. More intersting for me was to take a picture of the event being in the middle of the action literally speaking. I put some plastic on my camera and got in the middle of the crowd. When the action started I could hardly see anything but my sight captured this girl all covered with paint with wide smile on her face and I so pressed the button. Unfortunately I don't know the girl's name. (Photo and caption by Igor Kryzhko (Russia)/2014 Sony World Photography Awards) 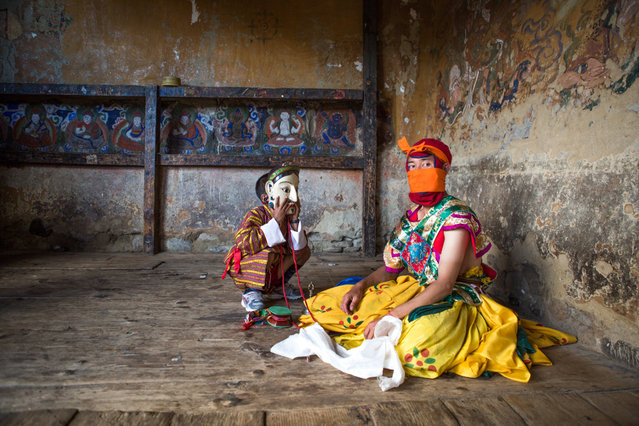 “Bhutanese masked dancer and boy”. A young Bhutanese boy tries on the mask of the dancer seated next to him; the dancer is having a short break after a physically gruelling masked dance at the colourful festival held at the Tamshing Lhakhang (Monastery) in Bumthang, Bhutan. (Photo and caption by Joyce Le Mesurier (Singapore)/2014 Sony World Photography Awards) 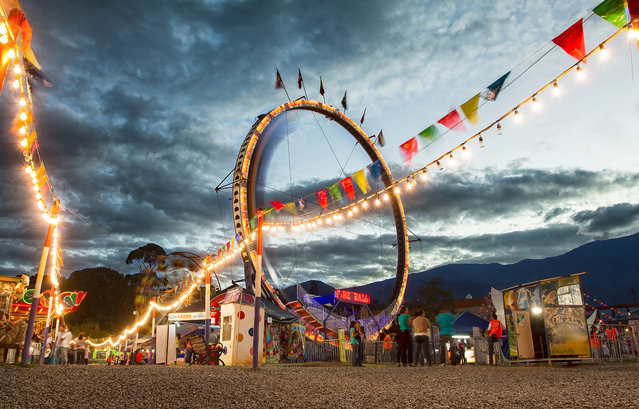 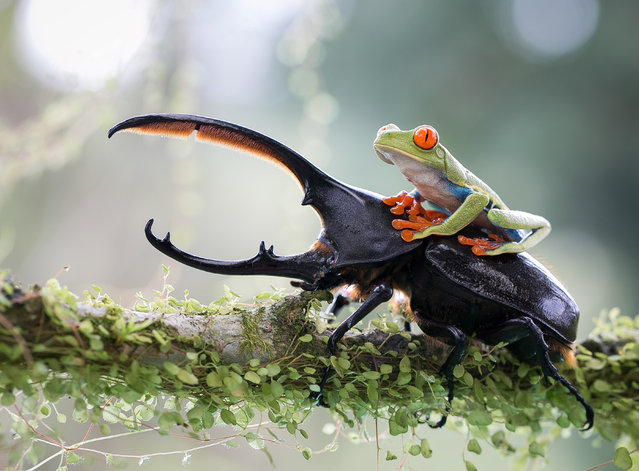 “The knight and his steed”. This picture was taken in a natural but controlled environment. There are pictures that can not be done in nature or that would imply a very high cost of both time and money, thats why photography workshops are run conducted at strategic locations and bringing EVERYONE who is interested, the basic notions (lighting, camera handling, composition, etc...) or the specimens, and afford them the opportunity to take pictures like this. Although controlled, this shot was not prepared at all, I was performing a workshop with the agalychnis callidryas treefrog from Costa Rica when the frog managed to jump to the branch where this huge titan was sleeping... I had my gear ready so I only had to change a few settings and shoot... the rest is history. (Photo and caption by Nicolas Reusens Boden (Sweden)/2014 Sony World Photography Awards) 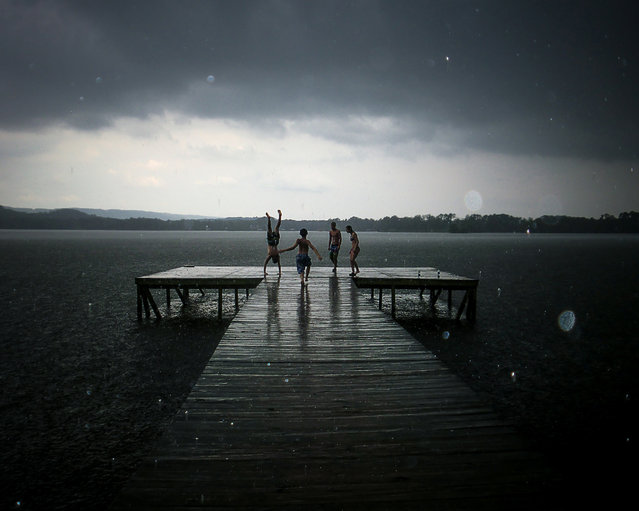 “Be Cheerful Even in the Darkest of Times”. In your youth, nothing can stop you from enjoying time with your friends. Even a large rainstorm during a summer swim can't stop you from creating wonderful memories. You may grow up and forget the names, but you'll always remember the moments like these that make up your childhood. This photograph is a picture of my friends on a dock at City Park in Scottsboro Alabama. (Photo and caption by Samantha Fortenberry (USA)/2014 Sony World Photography Awards) 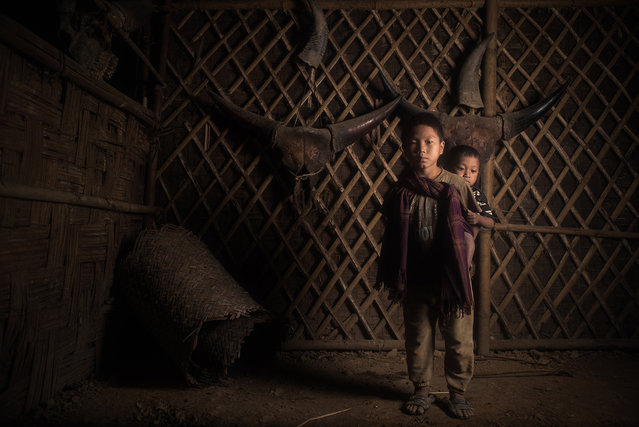 “The sons of the Angh of Nyahnyu”. The remote konyak village of Nyahnyu is located in Nagaland (India) near the border with Myanmar. Each village has an Angh (king of chief) and the succession is determined by blood line. (Photo and caption by Sergio Carbajo (Spain)/2014 Sony World Photography Awards) 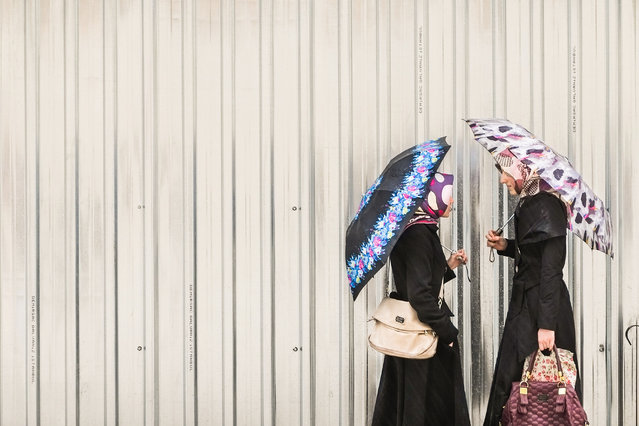