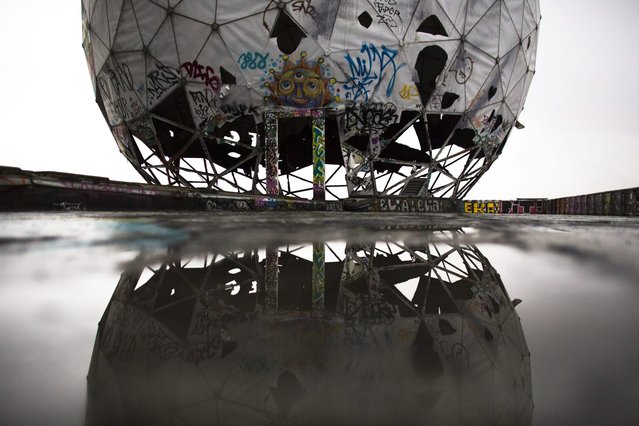 In this October 16, 2014, photo, the ruin of a vandalized golf ball shaped cover for antennas, of the abandoned former listening station of the United States National Security Agency, at the Teufelsberg (Devil's Mountain) is reflected in a puddle in Berlin. The listening station which was active until the early nineties is now used by graffiti artists and can be visits only with guided tours. (Photo by Markus Schreiber/AP Photo) 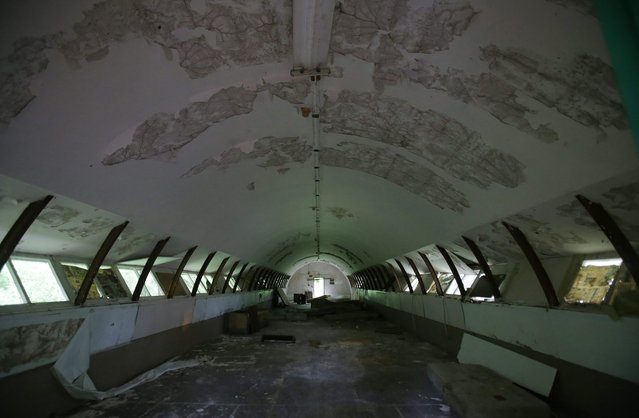 In this October 18, 2014 photo, the interior of concrete structures called “Quonset huts” crumbles inside the Subic Bay Freeport Zone, Zambales province, northern Philippines. Naval Station Subic Bay used to be one of the largest U.S. military base outside the American mainland. It was partly damaged during the eruption of Mount Pinatubo forcing American troops from the more severely damaged Clark Air Base to relocate at Subic. It was closed in 1992 after the Philippine Senate voted not to extend the lease on the facility. (Photo by Aaron Favila/AP Photo) 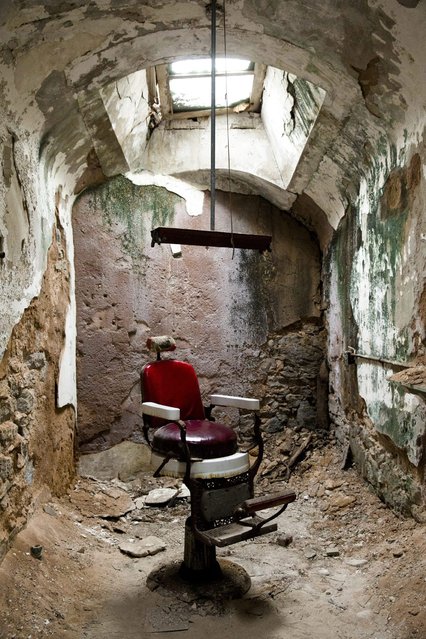 This October 13, 2014, photo shows a barber shop in cellblock 10 at Eastern State Penitentiary in Philadelphia. The penitentiary took in its first inmate in 1829, closed in 1971 and reopened as a museum in 1994. (Photo by Matt Rourke/AP Photo) 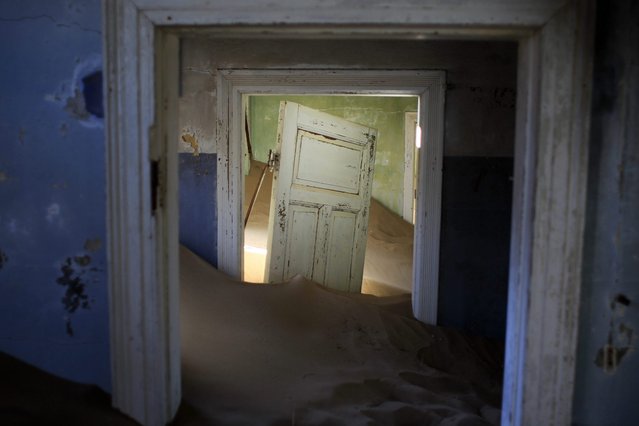 In this July 23, 2013 photo, sand fills an abandoned house in Kolmanskop, Namibia. Kolmanskop, was a diamond mining town south of Namibia, build in 1908 and deserted in 1956. SInce then, the desert slowly reclaims its territory, with sand invading the buildings where 350 German colonists and more than 800 local workers lived during its hay-days of the 1920s. (Photo by Jerome Delay/AP Photo) 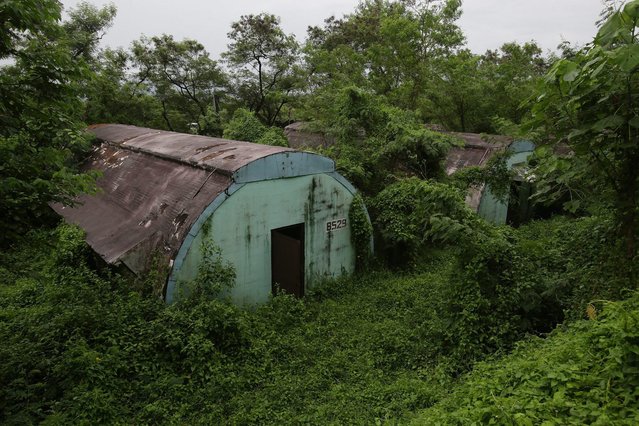 In this October 18, 2014, photo, a row of concrete structures called “Quonset huts” lie inside the Subic Bay Freeport Zone, Zambales province, northern Philippines. The huts were used as barracks for U.S. Marines inside the former American naval base. It was closed in 1992 after the Philippine Senate voted not to extend the lease on the facility. Some of the abandoned huts were reused as dormitories and staff houses for employees. Other abandoned huts have not been touched since U.S. forces left 22 years ago. (Photo by Aaron Favila/AP Photo) 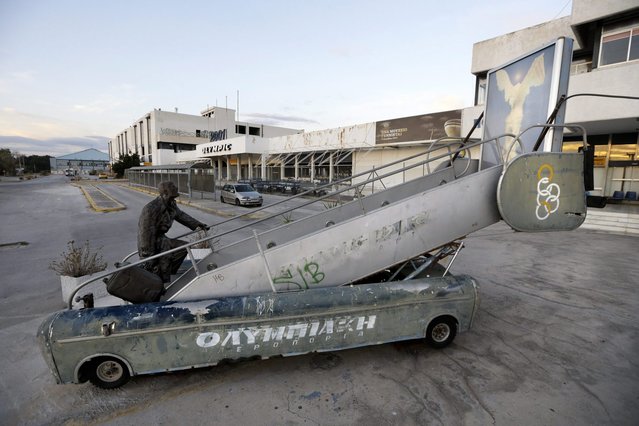 This October 22, 2014, photo shows an artifact at the west terminal of old airport in eastern Athens. The seaside site of Athens' old airport hosted half a dozen Olympic venues during Athens 2004 Games. This year, private investors won a tender to develop the entire area into a residential, commercial, hotel and leisure center, in a 7 billion-euro investment. (Photo by Thanassis Stavrakis/AP Photo) 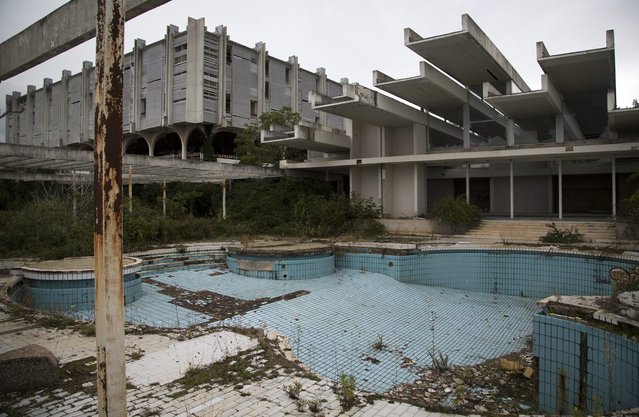 This October 23, 2014, photo shows a swimming pool at the abandoned Palace hotel at deserted tourist resort of Haludovo, near Malinska on the northern Adriatic island of Krk, Croatia. The resort was built as a joint venture of Yugoslav communist government and Bob Guccione, the founder of the Penthouse magazine. The resort was intended as a haven of extreme decadence for upscale vacationers on the Adriatic Sea. Today, it sits abandoned due to ownership issues and mismanagement. (Photo by Darko Bandic/AP Photo) 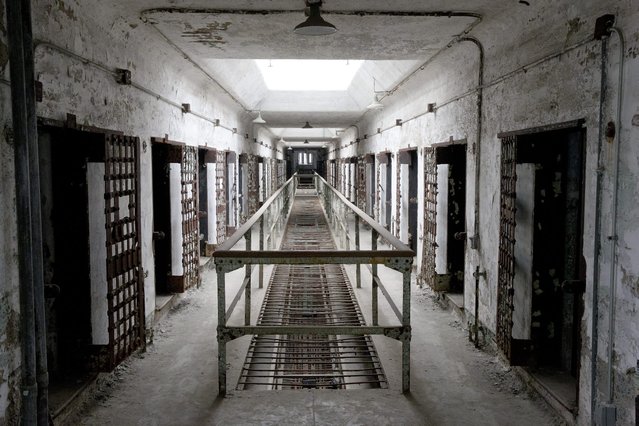 This October 13, 2014, photo shows cellblock 12 at Eastern State Penitentiary in Philadelphia. The penitentiary took in its first inmate in 1829, closed in 1971 and reopened as a museum in 1994. (Photo by Matt Rourke/AP Photo) 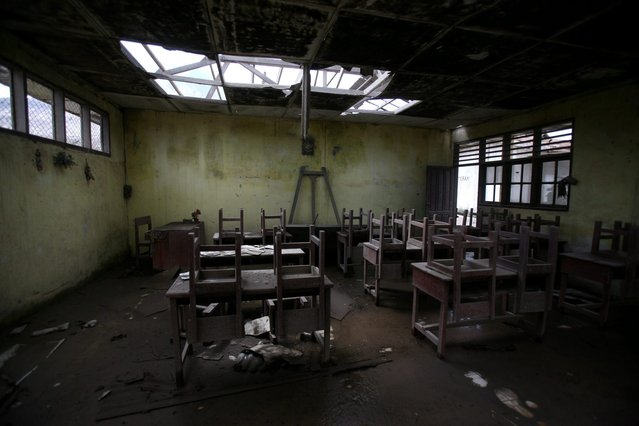 In this October 17, 2014, photo, chairs rest on tables in an empty classroom at an elementary school in the abandoned village of Simacem, North Sumatra, Indonesia. The village was abandoned after its people were evacuated following the eruption of Mount Sinabung. (Photo by Binsar Bakkara/AP Photo) 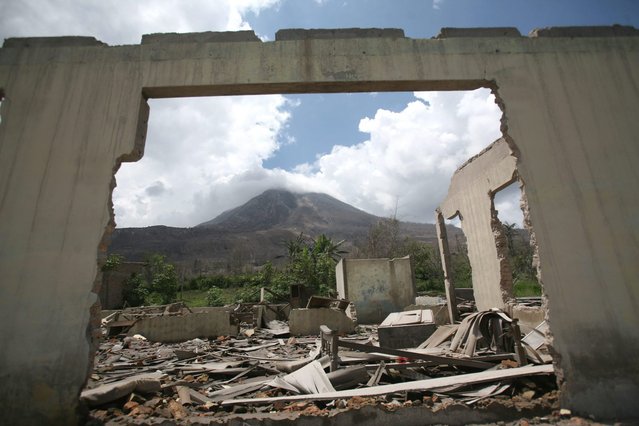 In this October 17, 2014, photo, Mount Sinabung is framed by a crumbling building in the abandoned village of Simacem village, North Sumatra, Indonesia. The village was abandoned after its people were evacuated following the eruption of the volcano. Sinabung, among about 130 active volcanoes in Indonesia, has sporadically erupted since 2010 after being dormant for 400 years. More than 22,000 people were evacuated from the area around the 2,600-meter (8,530-foot) volcano after the eruptions earlier this year that killed at least 16 people. Most have returned home, but about 4,700 remain in evacuation centers. (Photo by Binsar Bakkara/AP Photo) 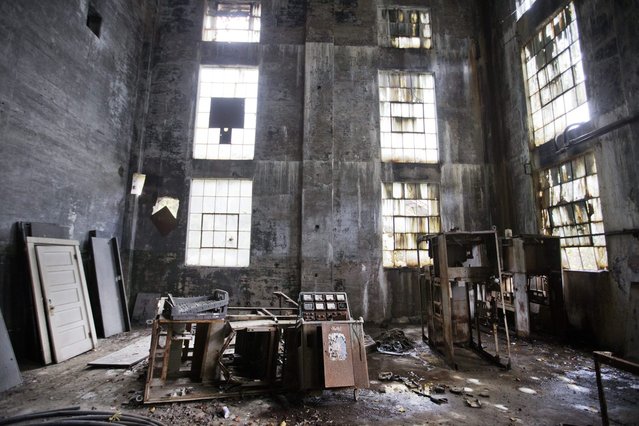 In this October 15, 2014 photo, rusted equipment sits on the floor of an abandoned coal power plant in Lynch, Ky. The community of Lynch, built as a company town in 1917 by U.S. Coal and Coke, a subsidiary of U.S. Steel, was at the time the largest coal camp in the world. It was built to house the many workers mining the coal to be used by U.S. Steel. The population peaked to around 10,000 but has since diminished to roughly 747 according to a 2010 census. The plant now sits abandoned across the street from the old mines that have since been turned into a museum. (Photo by David Goldman/AP Photo) 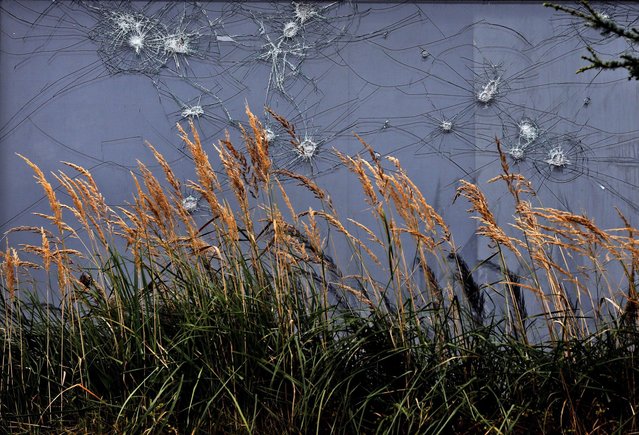 In this September 26, 2014 photo, grass grows in front of a damaged house window in Immerath, Germany. Immerath has become a ghost town to be demolished for the approaching brown coal mining. Inhabitants were relocated to a new town. (Photo by Frank Augstein/AP Photo) 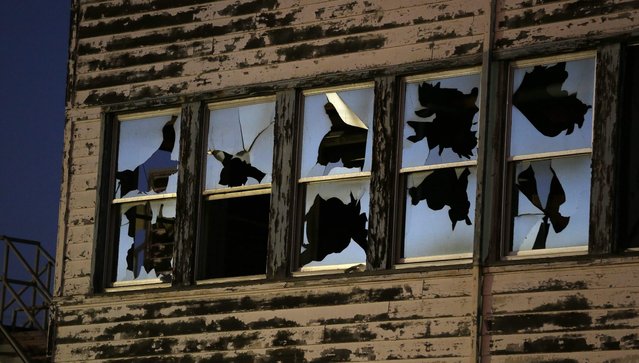 In this October 2, 2014, dusk falls on the shattered windows of the reemployment center at the former Mare Island Naval Shipyard in Vallejo, Calif. The shipyard dates from the 1850s and was the first U.S. Navy base in the Pacific. At its peak in World War II some 50,000 worked on the island. Today about 4,000 either work, live or go to school there. A number of its buildings and facilities are still empty following the closing of the shipyard in 1996. The building is to be demolished soon. (Photo by Eric Risberg/AP Photo) 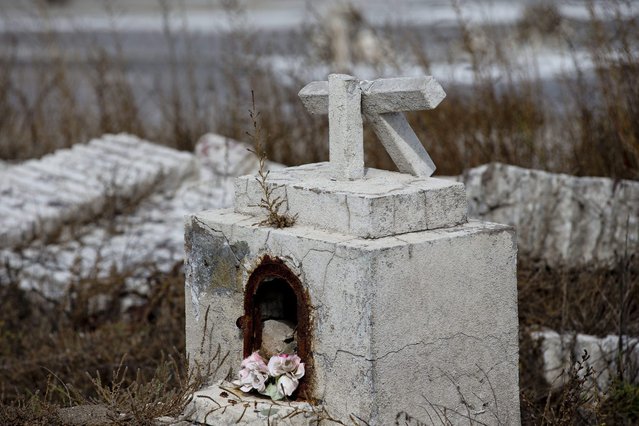 In this May 7, 2013 photo, a cross lies broken on a tomb in the abandoned town of Epecuen, Argentina. This town was once home to 1,500 residents, but they were forced to leave in 1985 when heavy rains made the nearby lake overrun its banks and submerged the town beneath almost 30 feet of water. The town was never rebuilt as the water started to recede. (Photo by Natacha Pisarenko/AP Photo) 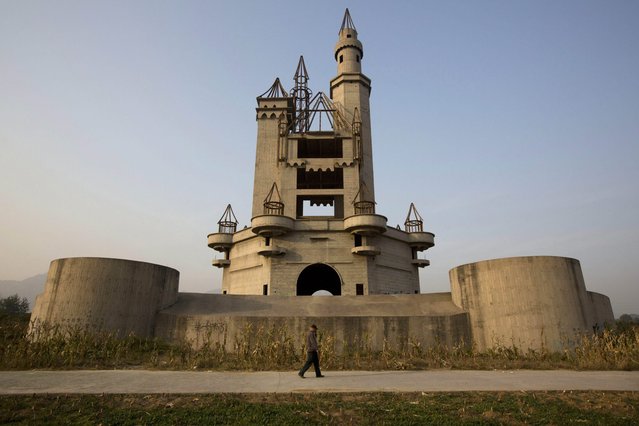 In this October 18, 2014, photo, a man walks past the shell of a castle-like building that was once destined to be part of Asia's biggest amusement park in Beijing, China. Work halted on the project in 1998 due to financial problems and the site has been left as it is until 2013 when developers demolished other parts of the massive park for redevelopment. The castle-like building however remains untouched and a reminder of better times in that part of Beijing's periphery. (Photo by Ng Han Guan/AP Photo) 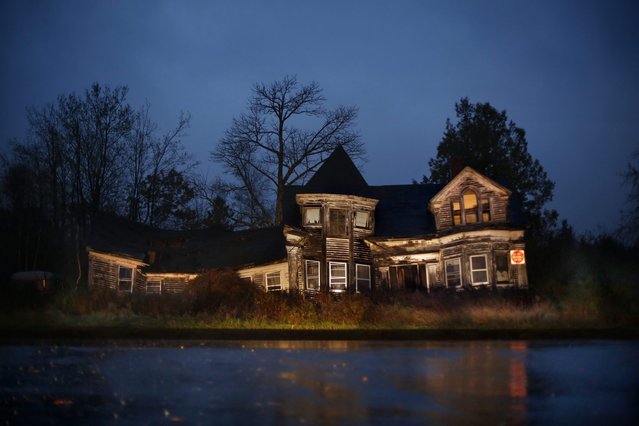 In this October 24, 2014 photo, an uninhabited old farmhouse sags in disrepair during a nor'easter rainstorm in Searsport, Maine. (Photo by Robert F. Bukaty/AP Photo) 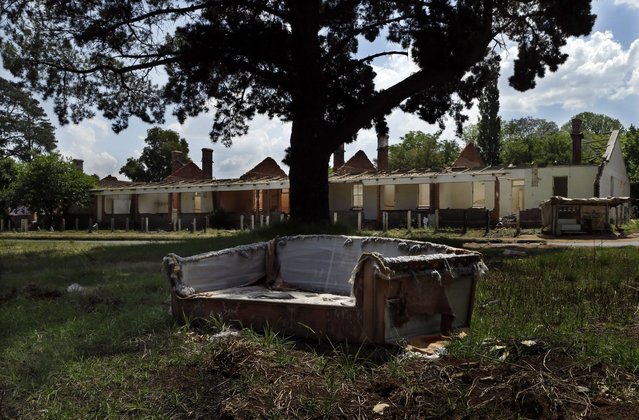 This October 24, 2014, photo shows a broken coach placed next a road nearby abandoned houses at Durban Deep mine residential area in Roodepoort, west of Johannesburg, South Africa. The once sought-after mining facility at Durban Deep now is in a crime-ridden state. The buildings have been stripped of everything valuable and sold for cash. (Photo by Themba Hadebe/AP Photo) 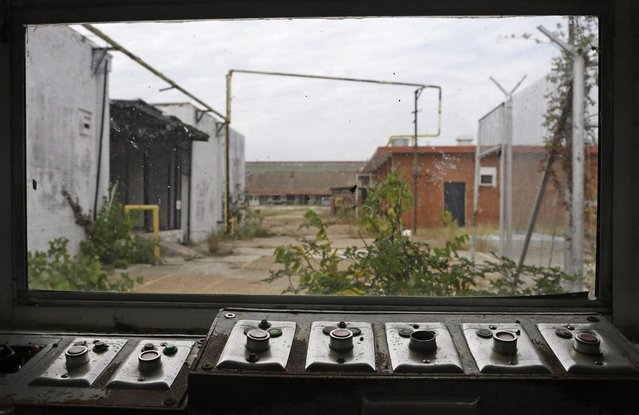 In this October 23, 2014, photo, buttons that used to open and close many of the gates sit with a view of some of the out buildings at the abandoned Central State Farm prison in Sugar Land, Texas. The unit was closed down three years ago. (Photo by Pat Sullivan/AP Photo) 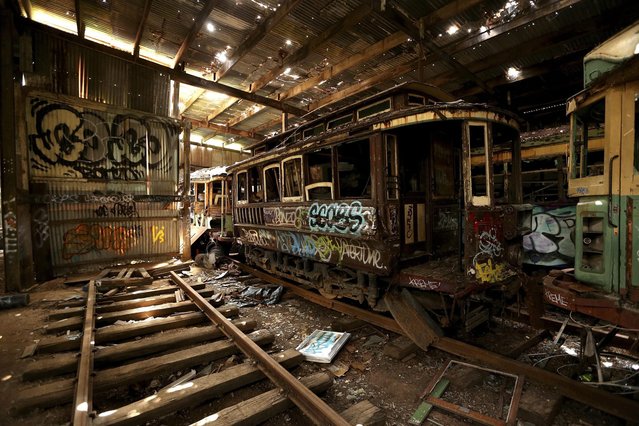 In this October 22, 2014 photo, old tramcars and trolley buses sit abandoned and wrecked in the Loftus Tram Shed in Sydney. Trams became a key part of life in Sydney after the network was installed in 1879, with 1,600 cars in service during the height of its popularity. The service was eventually shut down in 1961. (Photo by Rob Griffith/AP Photo)
Edit Del
14 Nov 2014 14:34:00, post received 0 comments
Publication archive:
←   →
Popular tags:
All tags
Last searches: