Touching Antonov An-124 Ruslan
“The Antonov An-124 Ruslan (NATO reporting name: Condor) is a strategic airlift jet aircraft. It was designed by the Soviet Union's Antonov design bureau. It is the world's largest ever serially-manufactured cargo airplane and world's second largest operating cargo aircraft. During development it was known as Izdeliye 400 in house, and An-40 in the West. First flown in 1982, civil certification was issued on 30 December 1992.

The An-124 was manufactured in parallel by two plants: the Russian company Aviastar-SP (ex. Ulyanovsk Aviation Industrial Complex) and by the Kyiv Aviation Plant AVIANT, in Ukraine. Series production ceased with the breakup of the Soviet Union. The last five unfinished airframes left from the Soviet times were completed in 2001 (1), 2002 (1), and 2004 (3).

Externally, the An-124 is similar to the American Lockheed C-5 Galaxy, but has a 25% larger payload, and instead of the Galaxy's T-tail, the An-124 uses a conventional empennage, similar in design to that of the Boeing 747. The An-124 has been used to carry locomotives, yachts, aircraft fuselages, and a variety of other oversized cargoes. The airlift is able to kneel to allow easier front loading. Up to 150 tonnes of cargo can be carried in a military An-124; it can also carry 88 passengers in an upper deck behind the wing centre section. The cargo compartment of An-124 is 36 m x 6.4 m x 4.4 m, ca. 20% larger than the main cargo compartment of C-5 Galaxy, which is 36.91 m x 5.79 m x 4.09 m. However, due to limited pressurization in the main cargo compartment (3.57 psi), it seldom carries paratroopers.

It has an on-board overhead crane capable of lifting up to 30 tons of cargo, and items up to 120 tons can be winched on board. Some planes have a limit of 20 tons for the crane.

Since the type was initially designed for only occasional military use, original An-124s were built with a projected service life of 7,500 flight hours with possibility for extension. However many airframes have flown more than 15,000 flight hours. In response to complaints by commercial users, the An-124-100 version has been built since 2000 with an improved service life of 24,000 hours. Older airframes are being upgraded to this standard. Additional retrofiting is being performed to extend its service life to 40,000 flight hours. The Kyiv Aviation Plant AVIANT offers upgrades to the Аn-124-100М-150 version.

Russia and Ukraine agreed to resume the production in the third quarter of 2008. In May 2008 it was reported that a new variant, to be known as the An-124-150, would have several improvements including a maximum lift capacity of 150 tonnes. However, in May 2009, Antonov's partner, United Aircraft Corporation announced it did not plan production of An-124s in the period 2009–2012”. – Wikipedia 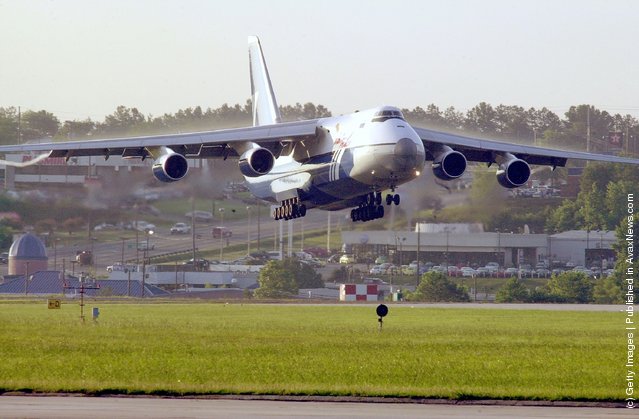 A Russian cargo plane carries a dissasembled US Navy spy plane and lands at the Dobbins Air Reserve Basen July 5, 2001 in Marietta, GA. The plane was forced to land on China's Hainan Island to be restored by Lockheed Martin. (Photo by Erik S. Lesser/Getty Images) 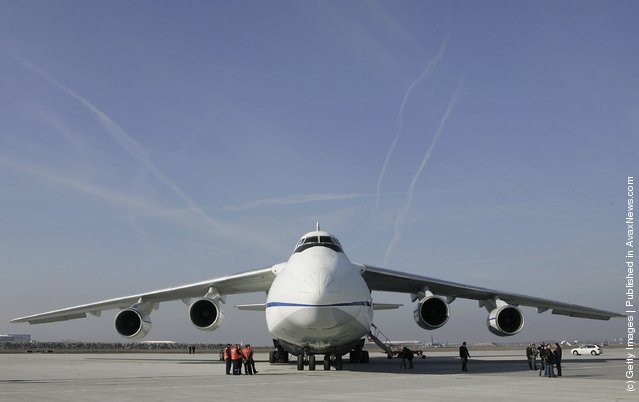 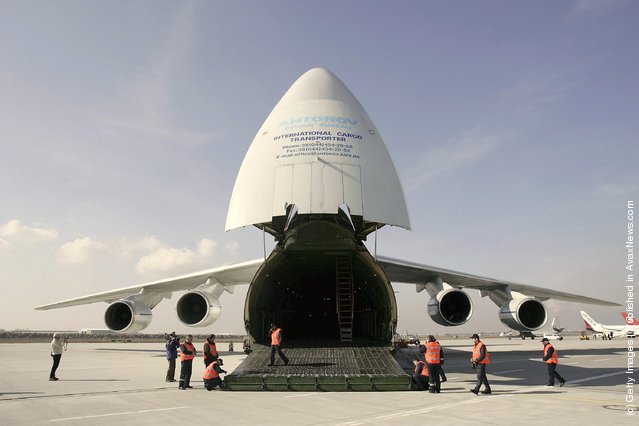 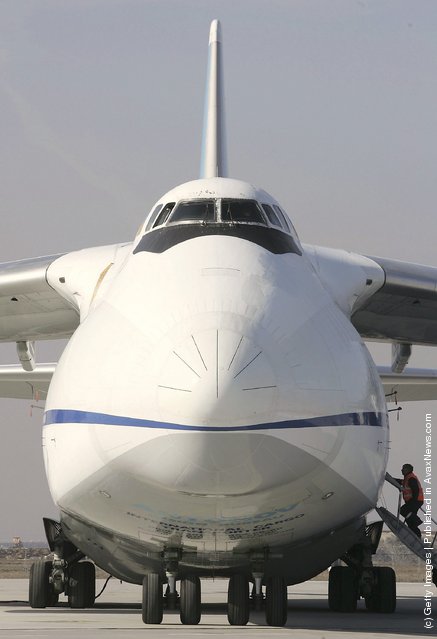 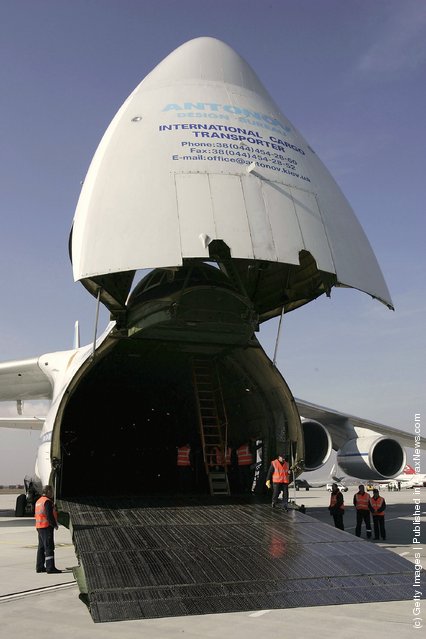 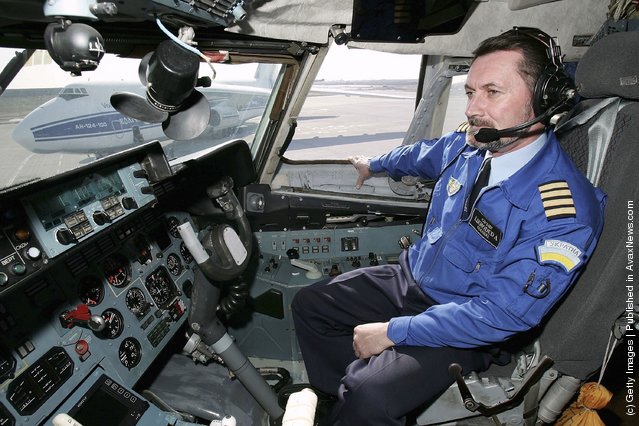 Ukrainian Captain Alexander Likhodeda sits in the cockpit of an Antonov AN-124-100 giant caro transport jet standing along with a second Antonov, visible out the cockpit window, at the Leipzig-Halle international airport March 23, 2006 in Leipzig, Germany. Two of the Antonovs stationed at Leipzig as part of the Strategic Airlift Interim Solution (SALIS), whereby NATO and the European Union will use the giant planes for military and humanitarian missions. (Photo by Sean Gallup/Getty Images) 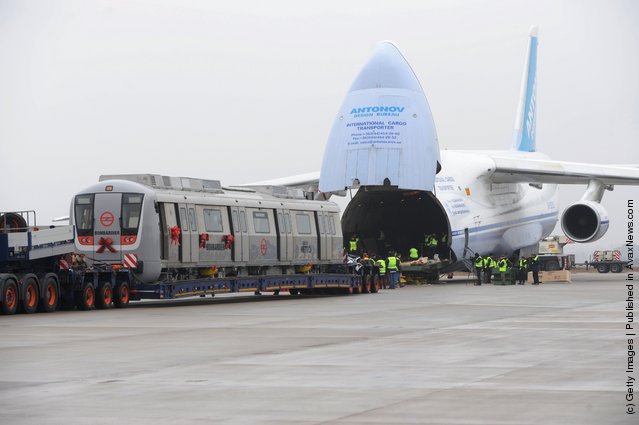 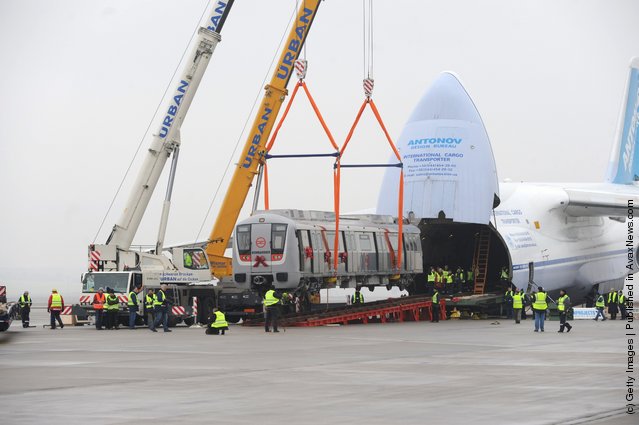 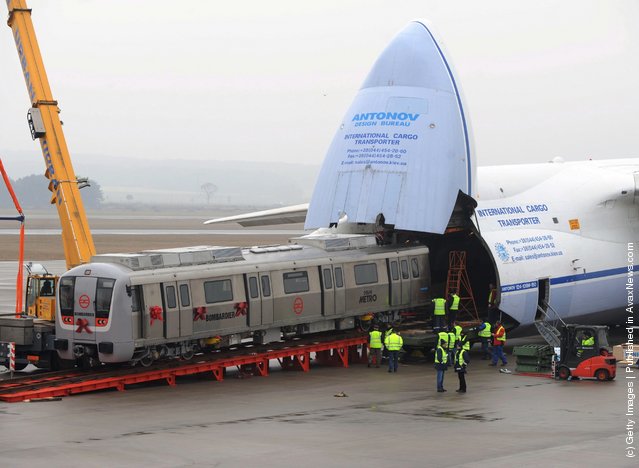 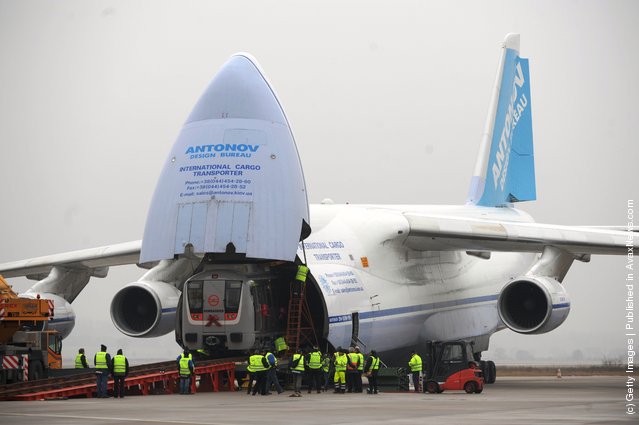 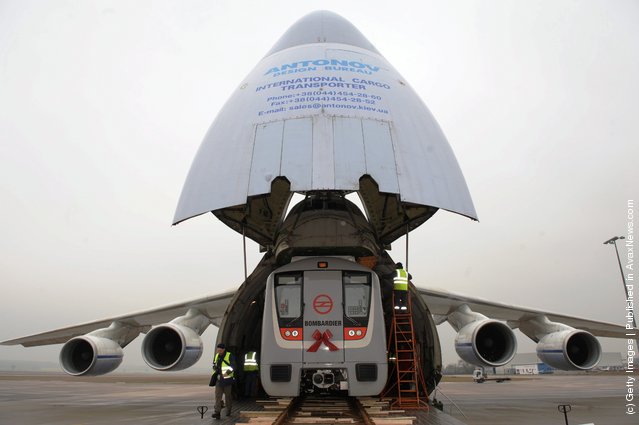