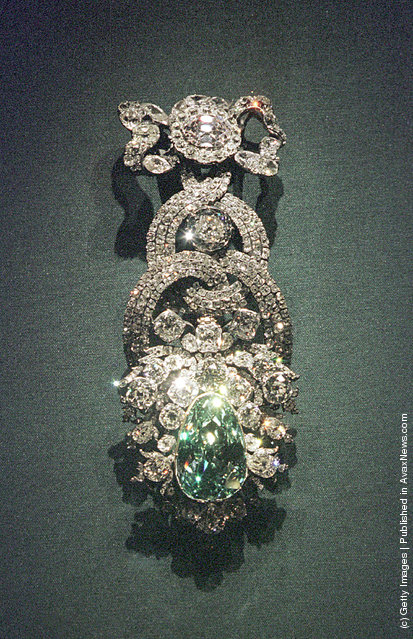 The Dresden Green Diamond, is shown on display October 12, 2000 at the National Museum of Natural History in Washington DC. The 41-carat diamond is the world's largest and finest natural green diamond, often considered the “sister gem” of he Hope Diamond. (Photo by Alex Wong/Newsmakers) 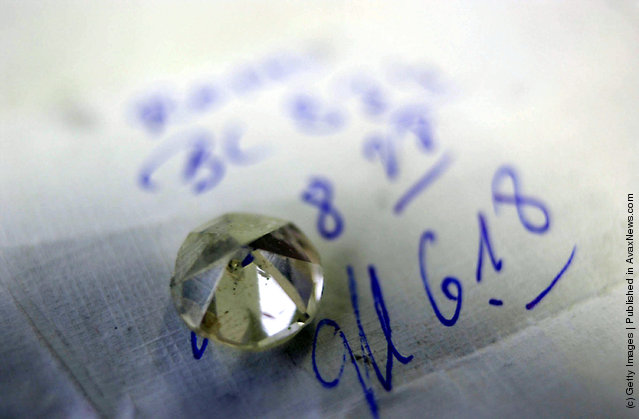 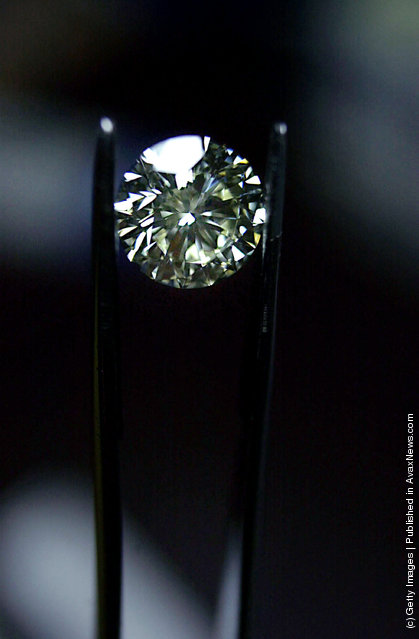 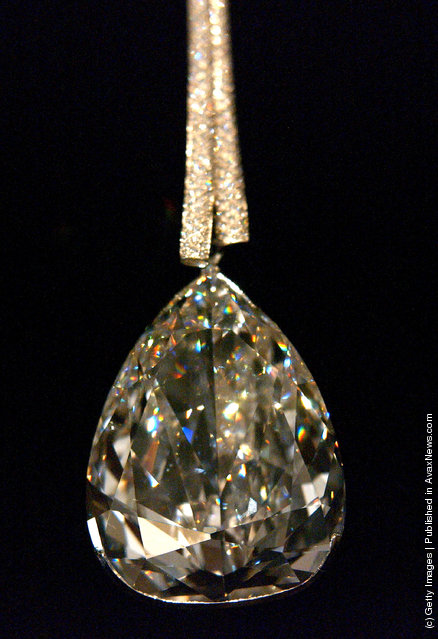 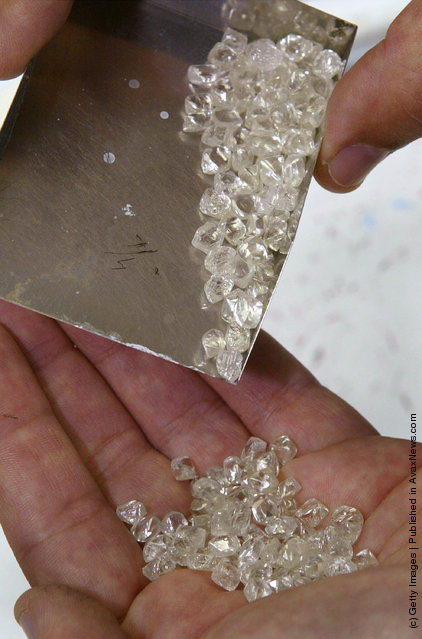 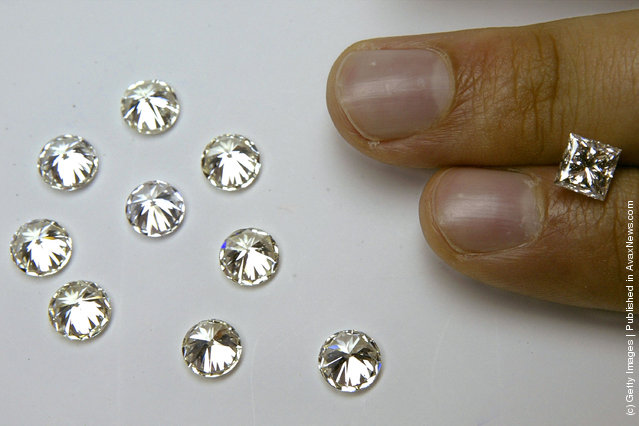 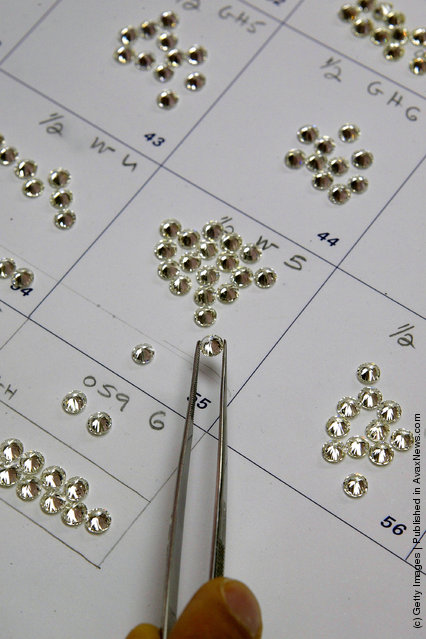 Brilliant cut diamonds are graded at a trading and polishing firm April 1, 2004 in Ramat Gan near Tel Aviv. Israel leads the world in the export of cut and polished diamonds. (Photo by David Silverman/Getty Images) 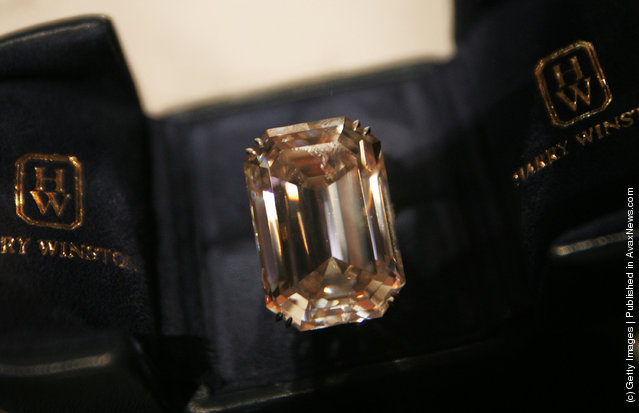 The Lesotho I, one of the world's largest diamonds, lies in a case at The Wedding Salon bridal show April 26, 2005 in New York City. The Lesotho I diamond is a 71 carat emerald-cut diamond cut from one of the largest raw diamonds ever recovered, found in Lesotho in 1967. (Photo by Chris Hondros/Getty Images) 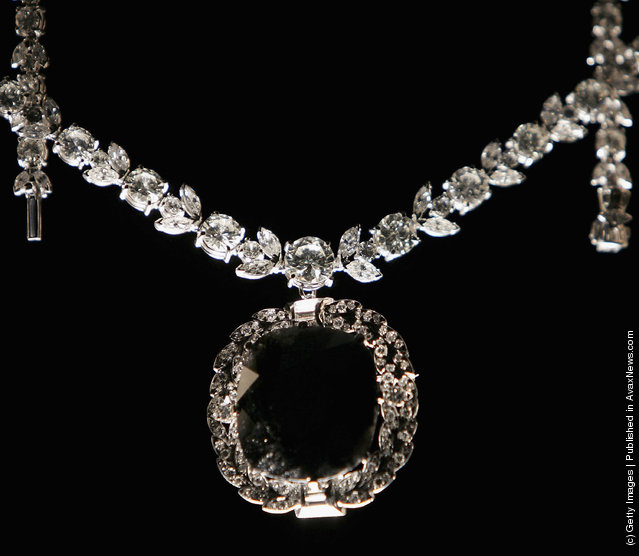 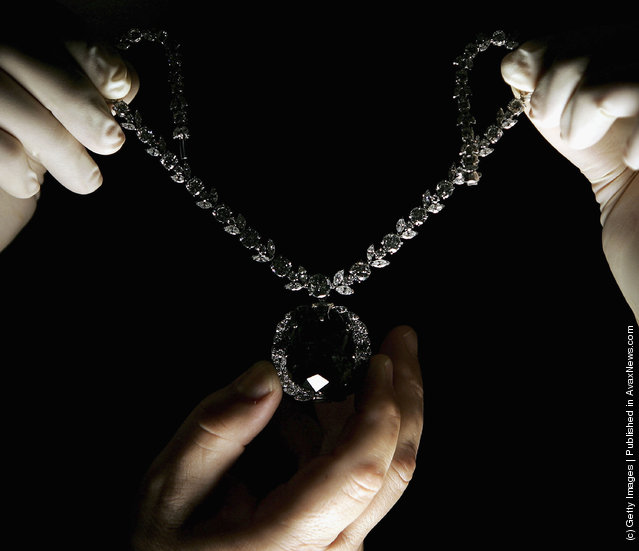 The Black Orlov diamond is displayed by its handler during a photocall, September 20, 2005 in London. The 67.5-carat diamond Black Orlov, believed to be responsible for the death of two Russian princesses and a New York diamond dealer, forms part of an exhibition of Diamonds at the Natural History Museum. (Photo by Bruno Vincent/Getty Images) 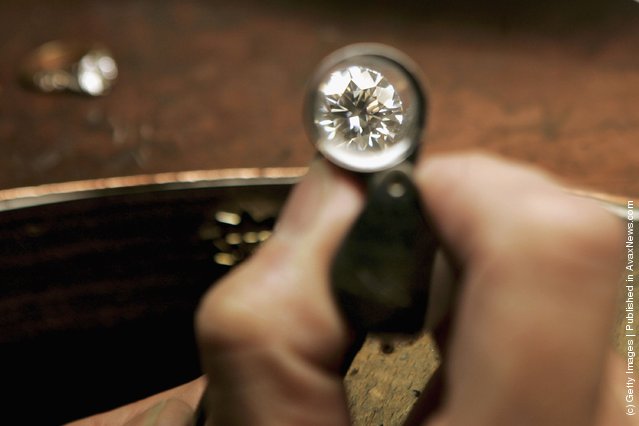 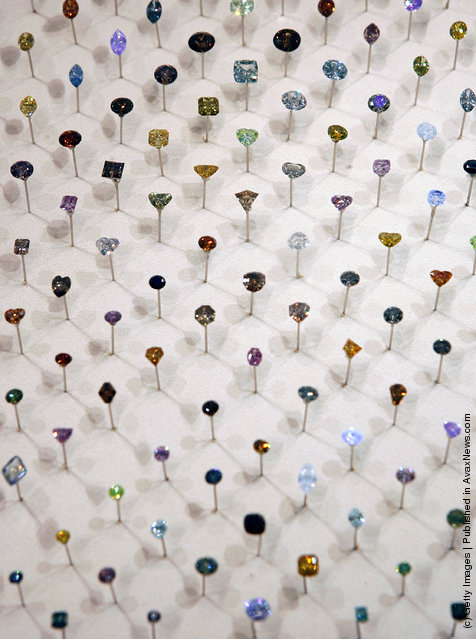 The Aurora Collection, of 296 naturally coloured diamonds which are on display at the Vault and on loan to the museum by diamond collectors Alan Bronstein and Harry Rodman, on November 27, 2007 in London. (Photo by Cate Gillon/Getty Images) 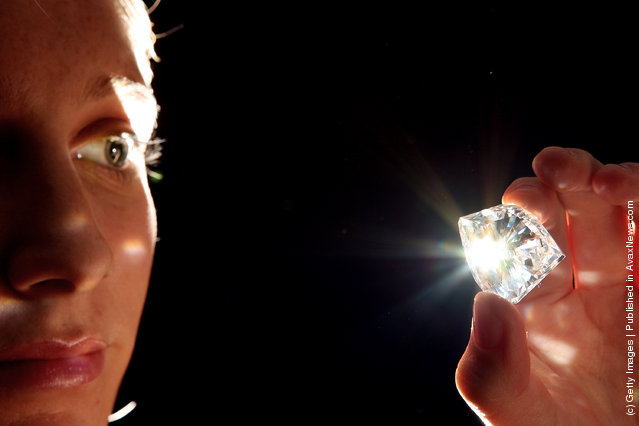 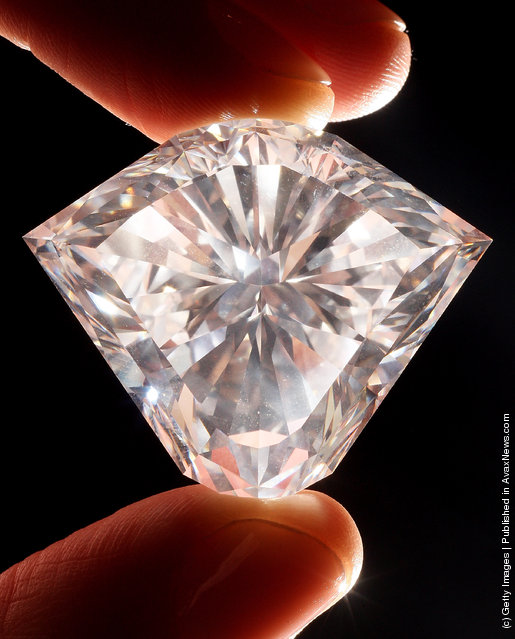 A Christie's employee displays a colourless diamond of 101.27 carats on February 19, 2008 in London, England. Price: minimum of $6 million. (Photo by Peter Macdiarmid/Getty Images) 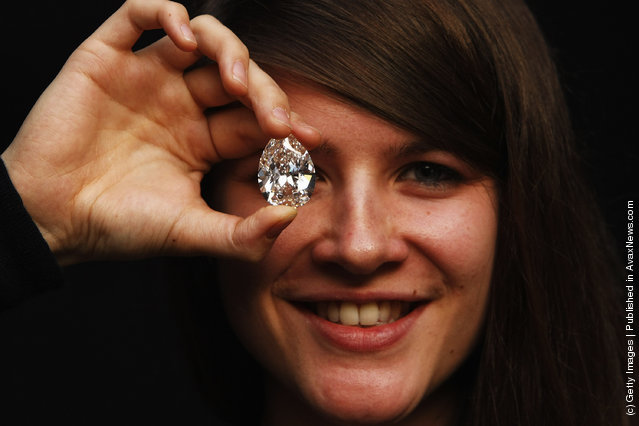 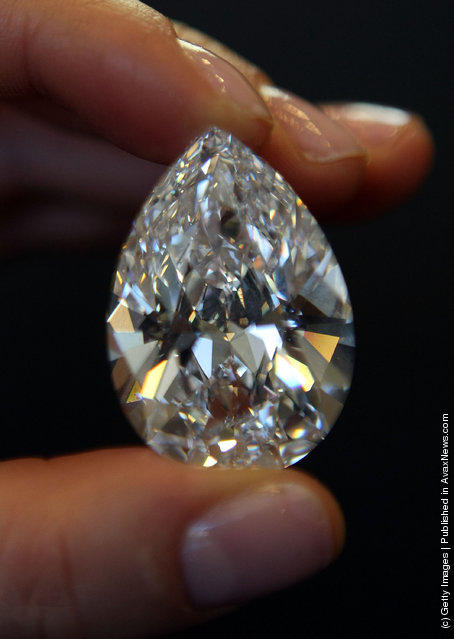 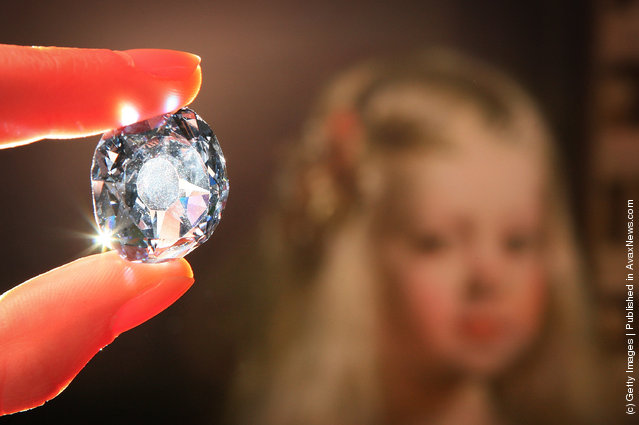 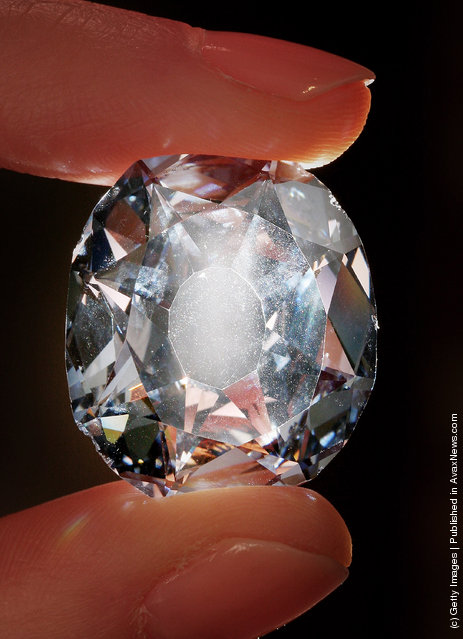 Christie's employee Becky Markley holds the Wittelsbach diamond on December 5, 2008 in London. The Wittelsbach Diamond, estimated to sell for ВЈ9 million, is part of Christie's “Jewels: The London Sale” held on December 10, 2008 in London. The diamond is an extremely rare 35.56 carat 17th century fancy deep greyish blue. King Philip IV of Spain presented the Wittelsbach diamond to his daughter the Infanta Margarita Teresa in 1664 as part of her dowry. (Photo by Peter Macdiarmid/Getty Images) 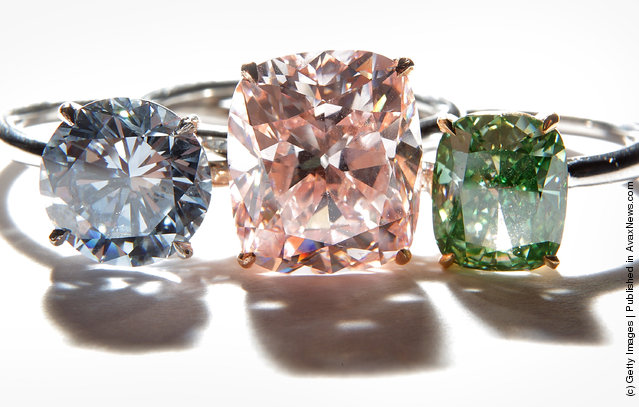 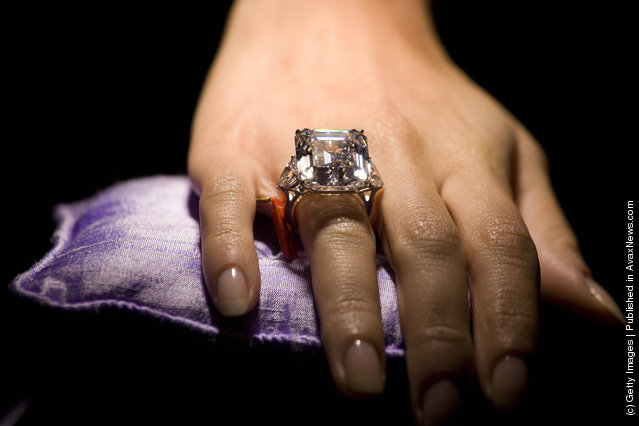 The Annenberg Diamond is displayed during a press preview of Christie's fall jewel sale on October 16, 2009 in New York City. The flawless 32.01 carat diamond, mounted as a ring and flanked by two pear-shaped diamonds weighing 1.5 and 1.61 carats, is expected to sell for $3–5 million. (Photo by Michael Nagle/Getty Images) 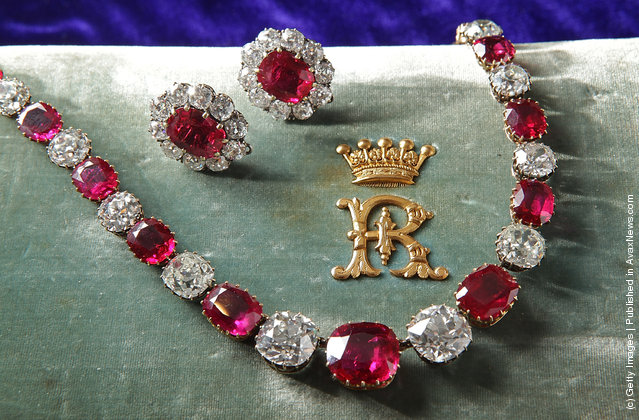 A rare ruby and diamond necklace and ruby earings from the 19th Century are displayed at Sotheby's on October 22, 2009 in London, England. Property of Mary, Duchess of Roxburghe, the necklace is thought to have been purchased from Garrards by the 5th Earl of Rosebery, as recorded in one of his diary entries. Estimated at USD$ 530,000 to 975,000, the necklace is accompanied by its original, very fine turquoise velvet fitted case, embellished with the monogram R under a coronet, by R&S Garrard & Co, Goldsmith and Jewellers to The Crown, as well as by the original hand-written documentation detailing the weights of the stones. (Photo by Peter Macdiarmid/Getty Images) 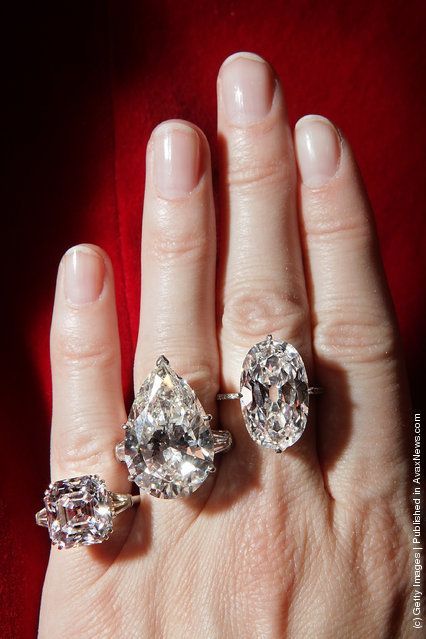 A collection of rare diamonds is displayed at Sotheby's on October 22, 2009 in London, England. Comprising of a pear-shaped diamond (C) the property of a Lady, the stone weighing 25.47 carats, H color, VS2 clarity mounted in platinum as a ring, flanked by baguette diamonds weighing approximately 2.00 carats estimated at USD $600,000 to 700,000, a diamond ring set with an oval brilliant-cut diamond (R) weighing 16.04 carats, F color, SI1 clarity, type IIa, within a platinum and diamond string mounting estimated at USD $350,000 to 450,000 and a square Emerald-Cut Diamond (L) of 9.69 carats set as a ring is both the highly desirable Asscher-cut and certified type IIa, the most transparent of diamonds. Offered from an Estate, this stone is E color, VVS2 clarity and may be potentially flawless estimated at USD $350,00 to 450,000. (Photo by Peter Macdiarmid/Getty Images) 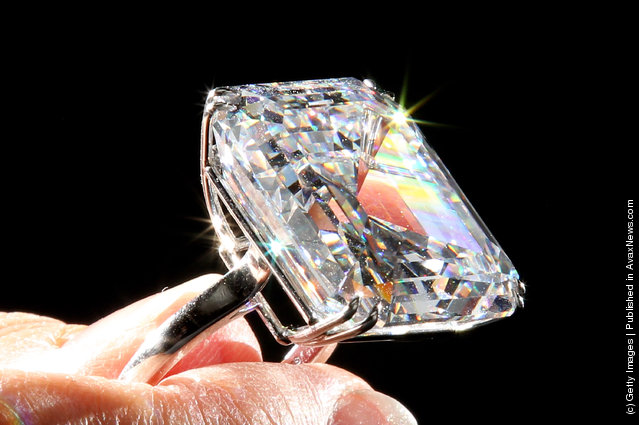 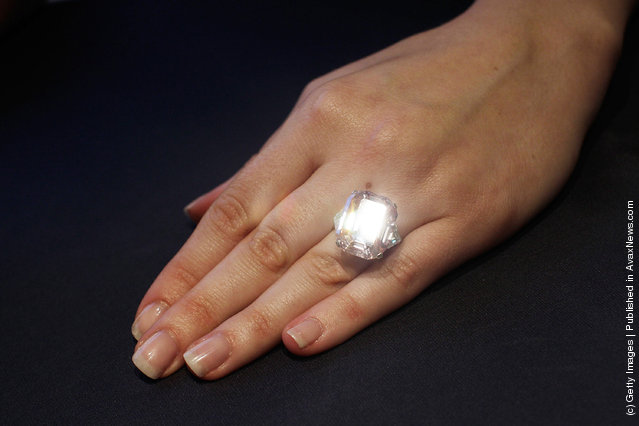 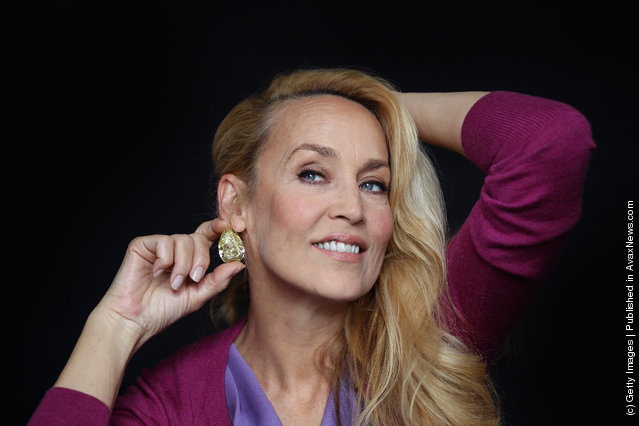 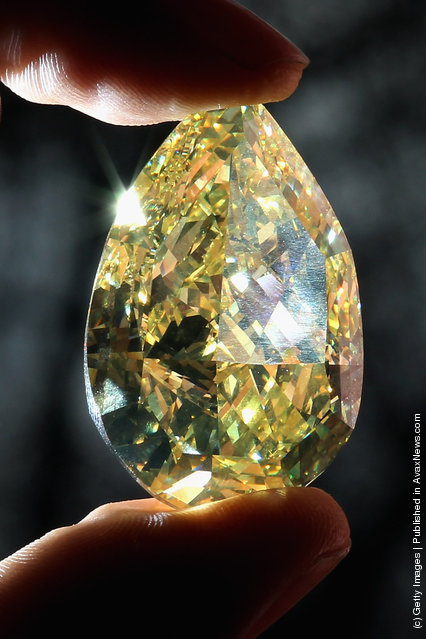 A rare yellow pear-shaped diamond is held during a photocall at the Natural History Museum on February 24, 2011 in London, England. The 110.03 carat diamond, which is on loan from leading specialised diamond manufacturers Cora International, is the largest yellow pear-shaped diamond in the world. (Photo by Dan Kitwood/Getty Images)
Edit Del
05 Oct 2011 13:21:00, post received 0 comments
Publication archive:
←   →
Popular tags:
All tags
Last searches: