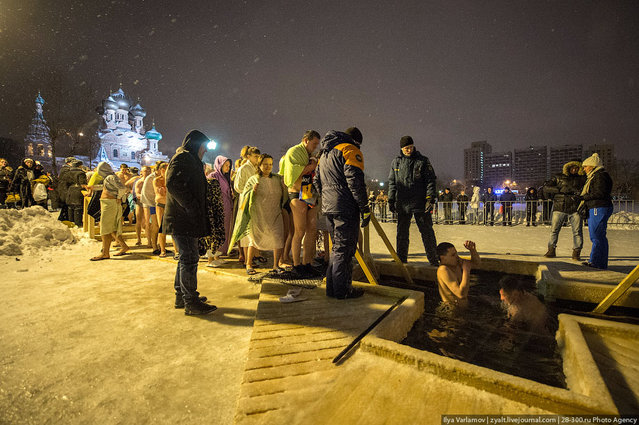 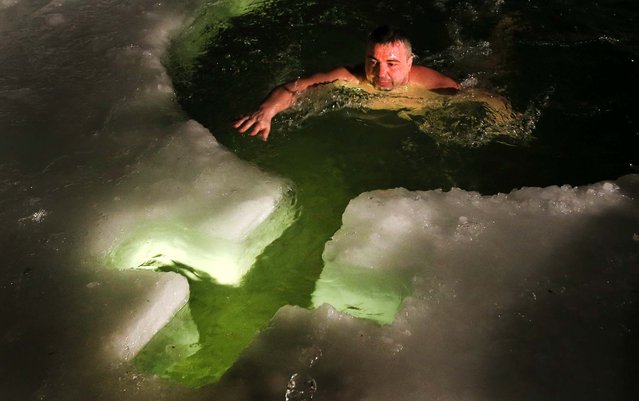 A man swims in the ice cold water of a lake on the eve of the Russian Orthodox Epiphany in Minsk, Belarus. (Photo by Sergei Grits/Associated Press) 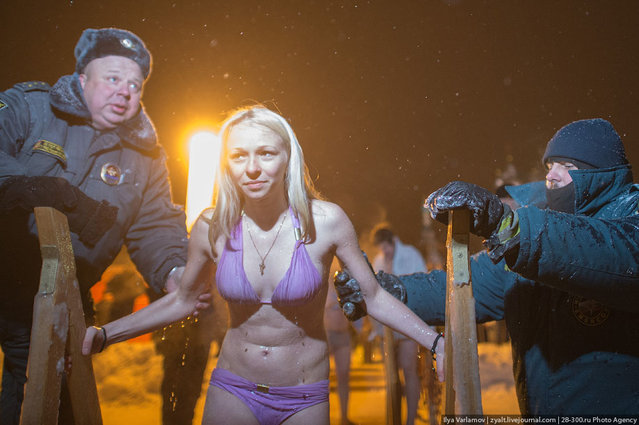 Police and rescuers help the young girl during mass ice bathing in Moscow on January 19, 2013. (Photo by Iliya Varlamov) 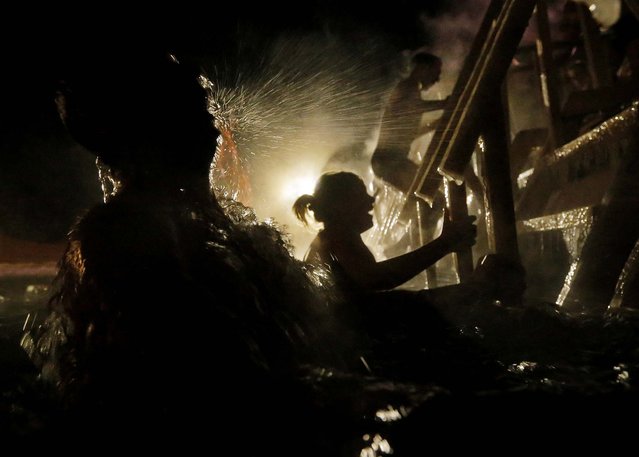 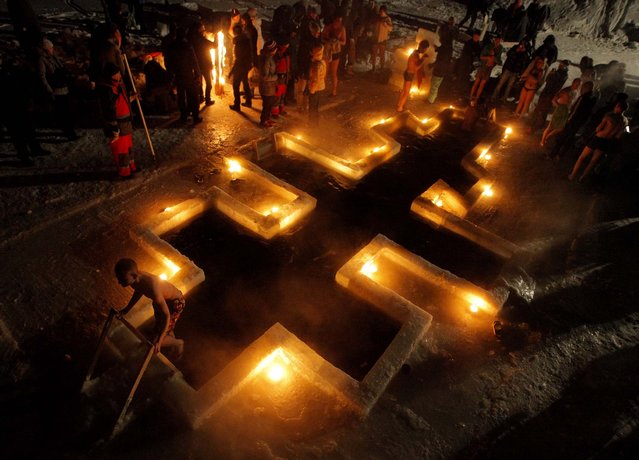 Russian Orthodox believers swim in a pond's icy water on Epiphany in Tyarlevo village outside St. Petersburg, where the temperature is -14.8 F, on January 19, 2013. Thousands of Russian Orthodox Church followers plunged into icy rivers and ponds across the country to mark Epiphany, cleansing themselves with water deemed holy for the day. Water that is blessed by a cleric on Epiphany is considered holy and pure until next year's celebration, and is believed to have special powers of protection and healing. (Photo by Dmitry Lovetsky/Associated Press) 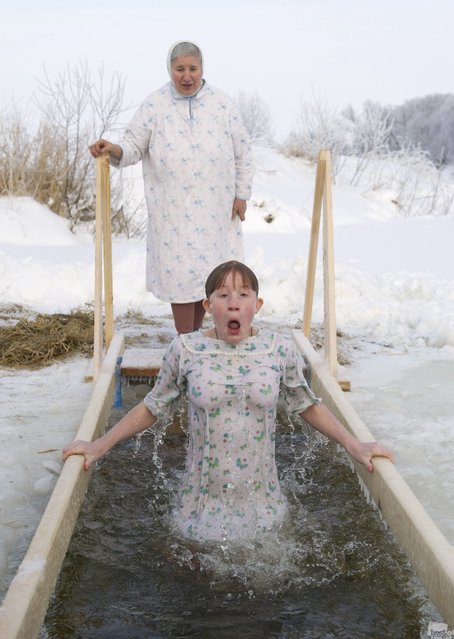 Ritual bathing in the river Nerl, near the village Poretsky the Vladimir region. (Photo by Ilya Pitalyov) 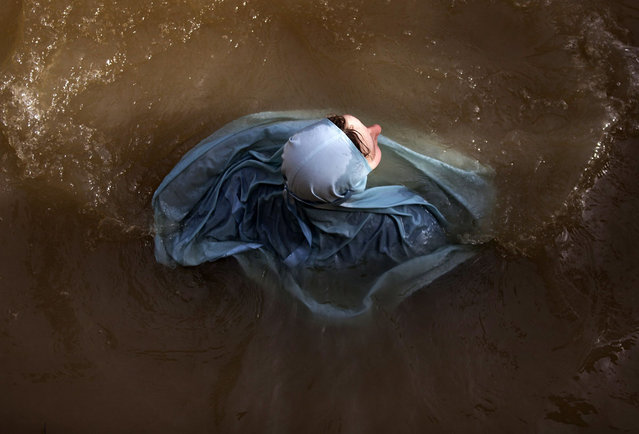 A Christian Orthodox nun plunges into the waters of the Jordan River during a ceremony marking the Orthodox Feast of the Epiphany on January 18, 2013 at the Qasr al-Yahud baptismal site in the West Bank by the Jordan River. Greek Orthodox Patriarch of Jerusalem Theophilos III led the ceremony during which thousands of Orthodox Christians braved rain to plunge into plastic tubs filled with its murky water to celebrate Jesus's baptism. (Photo by Menahem Kahan/AFP Photo) 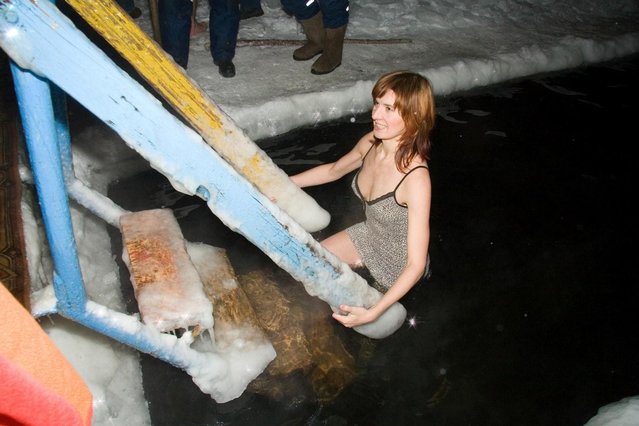 In an observance of Epiphany, Russian Orthodox believers swim in an icy pond outside Nizhny Novgorod, Russia. (Photo by Olga “Zwezdochka”) 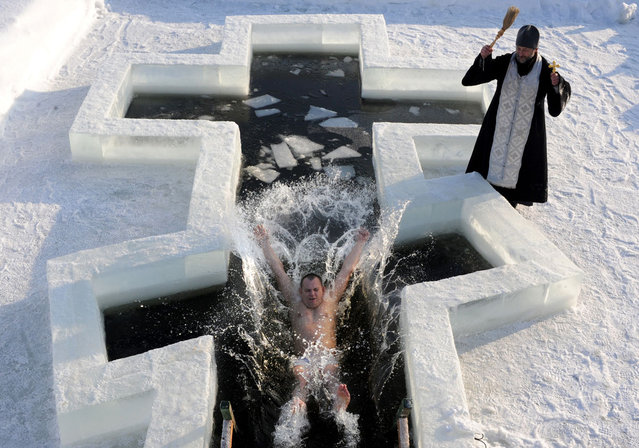 A Belarus Orthodox believer plunges into icy waters as a priest blesses him on the eve of the Epiphany holiday in Pilnitsa some 30 km outside Minsk, on January 18, 2013. Thousands of believers jumpe into holes cut in ice, braving freezing temperatures, on January 18 and early on January 19 to mark Epiphany, when they take part in a baptism ceremony. (Photo by Viktor Drachev/AFP Photo) 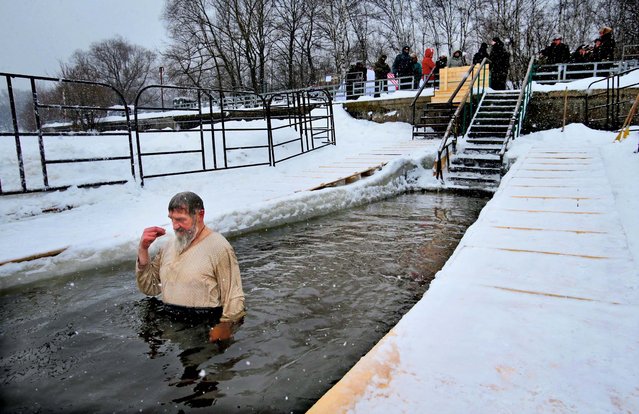 A man makes the sign of the cross while bathing in the ice cold water of the Moskva River, in Moscow, Russia, on January 18, 2013. Thousands of Russian Orthodox Church followers on will plunge into icy rivers and ponds across the country to mark the upcoming Epiphany, cleansing themselves with water deemed holy for the day. (Photo by Mikhail Metzel/Associated Press)
Edit Del
19 Jan 2013 10:07:00, post received 0 comments
Publication archive:
←   →
Popular tags:
All tags
Last searches: