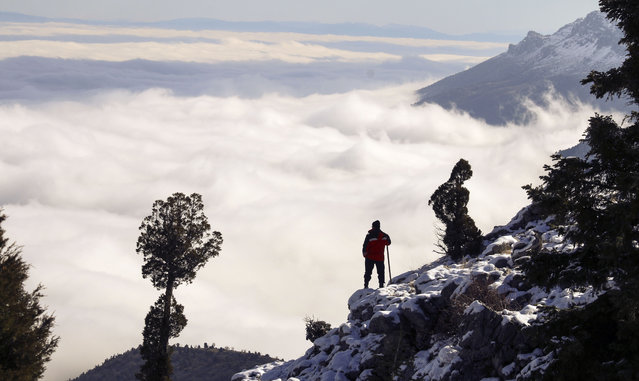 Fog blankets Seydisehir town as a hiker is seen on the top of Kupe mountain in Konya, Turkey on December 24, 2018. (Photo by Fahri Kubilay/Anadolu Agency/Getty Images) 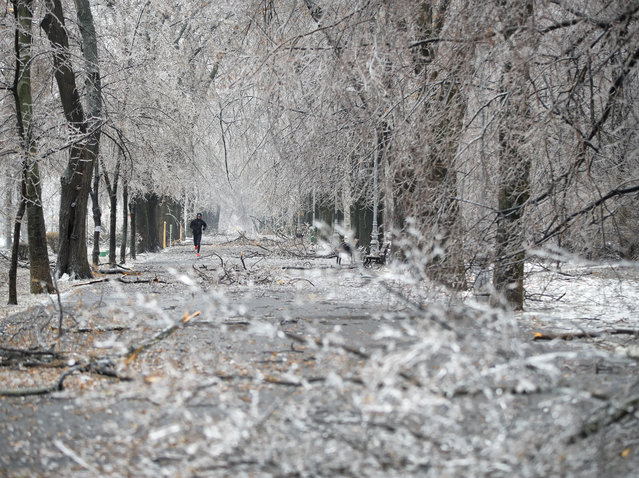 A man jogs along a path with ice covered fallen tree branches in Bucharest, Romania, Saturday, January 26, 2019. Severe weather conditions has settled on much of the region with freezing rain disrupting roads and air traffic. (Photo by Vadim Ghirda/AP Photo) 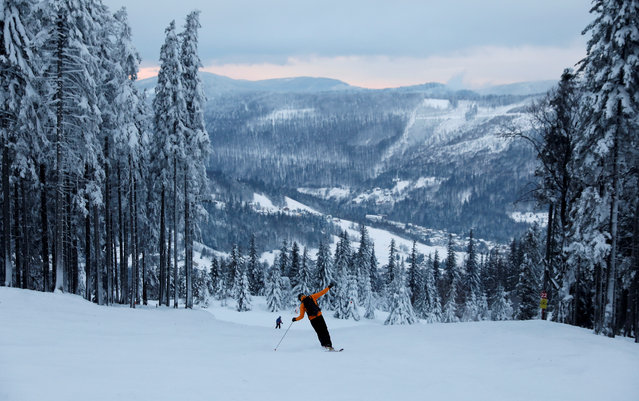 A skier skis from Skrzyczne mountain on a winter day in Szczyrk, Poland January 9, 2019. (Photo by Kacper Pempel/Reuters) 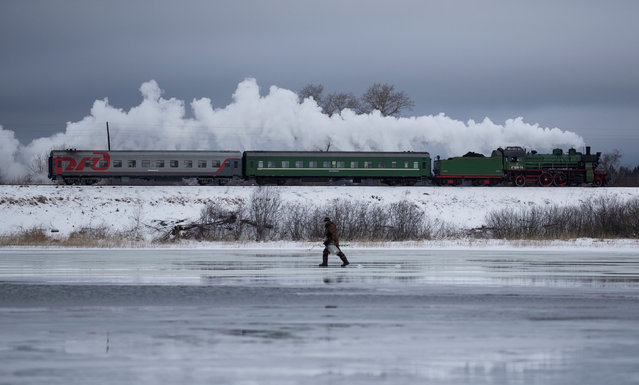 A steam train passes by along a dam outside Ostashkov in Tver region, Russia on February 16, 2019. (Photo by Maxim Shemetov/Reuters) 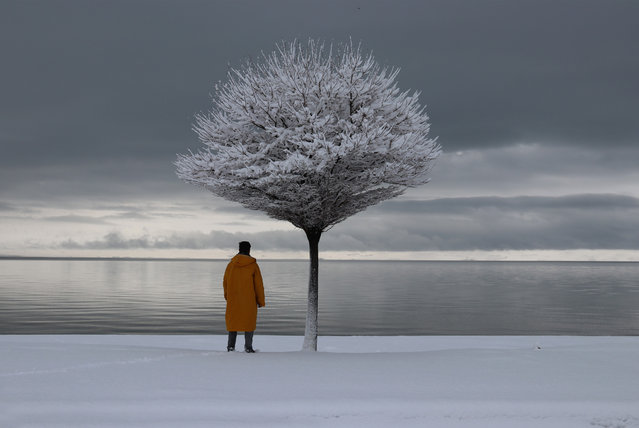 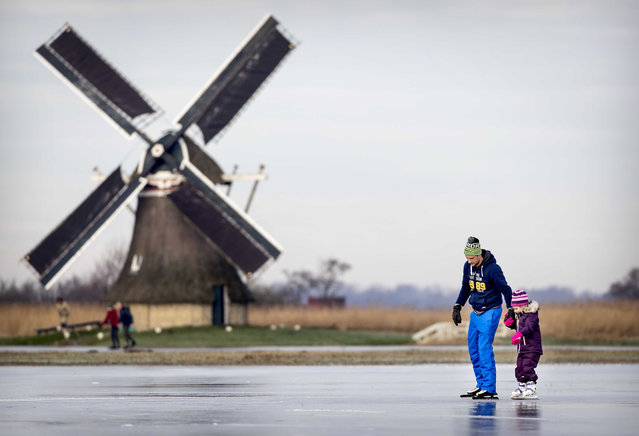 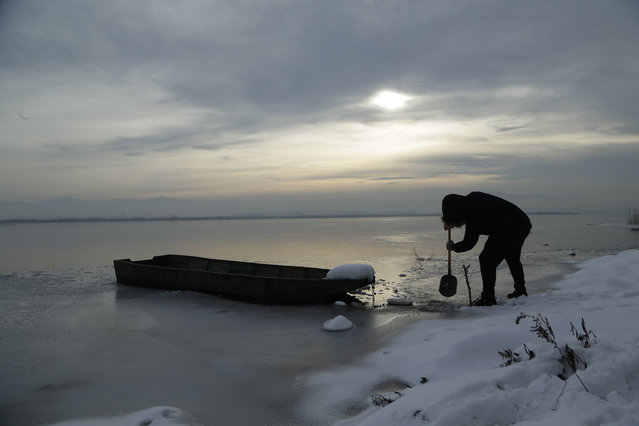 A man breaks the ice with the shovel to release his boat for fishing on Modrac lake in northern town of Lukavac, Bosnia, Sunday, January 27, 2019. Heavy snow descended on the Balkan countries causing havoc throughout the region. (Photo by Amel Emric/AP Photo) 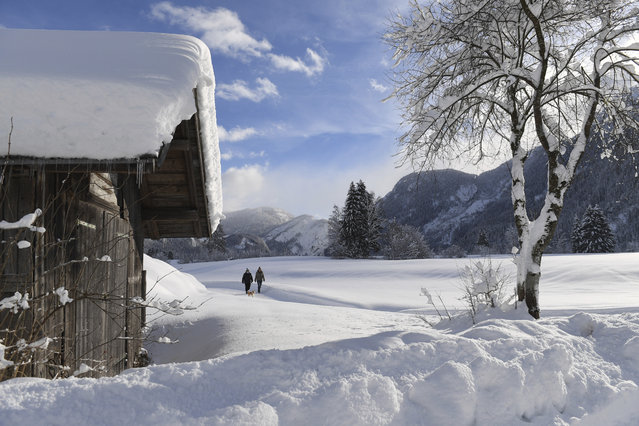 Two woman make their way through the fresh snow in Lofer, Austrian province of Salzburg on Friday, January 11, 2019. (Photo by Kerstin Joensson/AP Photo) 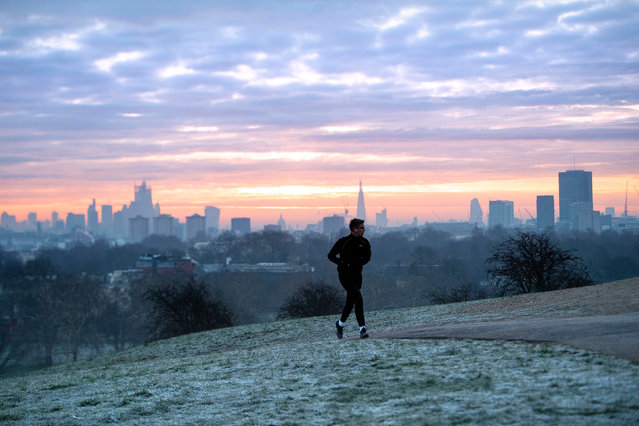 A man runs across a frosty Primrose Hill in London, UK at sunrise January 23, 2019. The Met Office issued yellow severe ice warnings for the south-east, central and north of England, as well as for Scotland. (Photo by Victoria Jones/PA Wire Press Association) 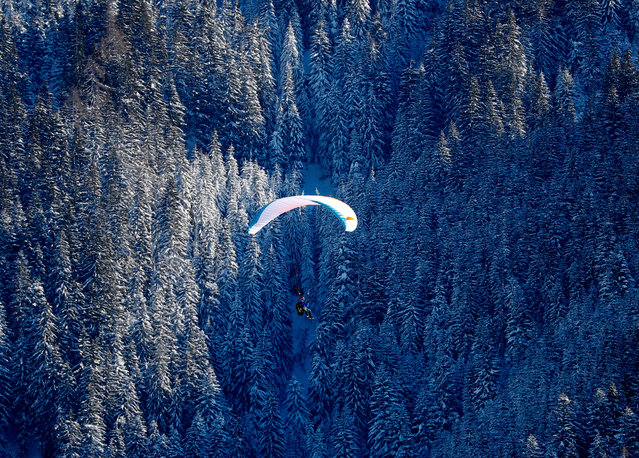 A paraglider is seen after heavy snowfall in Werfenweng, Austria on January 16, 2019. (Photo by Leonhard Foeger/Reuters) 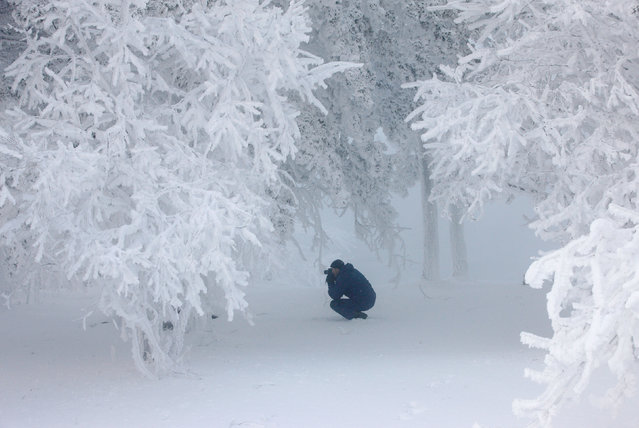 A man takes pictures of trees covered with hoarfrost and snow in a forest on the bank of the Yenisei River, with the air temperature at about minus 32 degrees Celsius (minus 25.6 degrees Fahrenheit), near the Siberian city of Krasnoyarsk, Russia December 6, 2018. (Photo by Ilya Naymushin/Reuters) 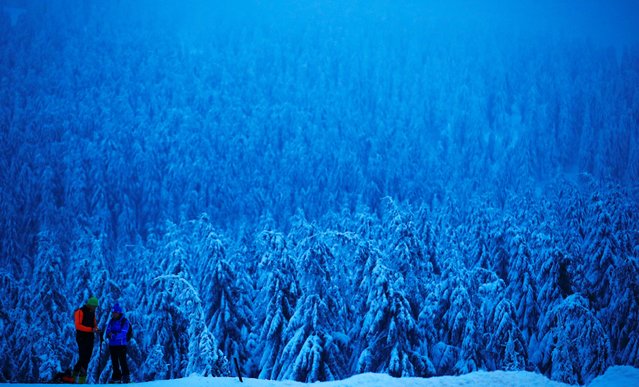 People stand in front of a snow-covered forest in Oberwiesenthal, Germany, January 24, 2019. (Photo by Hannibal Hanschke/Reuters) 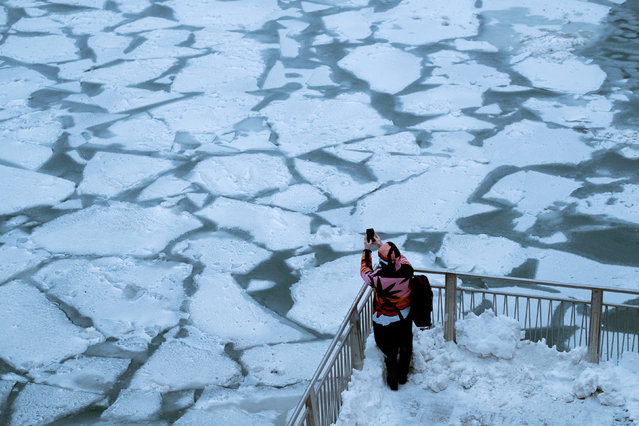 A pedestrian stops to take a photo by Chicago River, as bitter cold phenomenon called the polar vortex has descended on much of the central and eastern United States, in Chicago, Illinois, U.S., January 29, 2019. (Photo by Pinar Istek/Reuters) 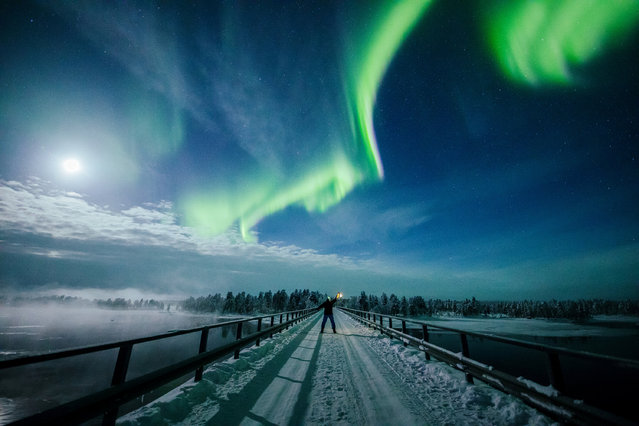 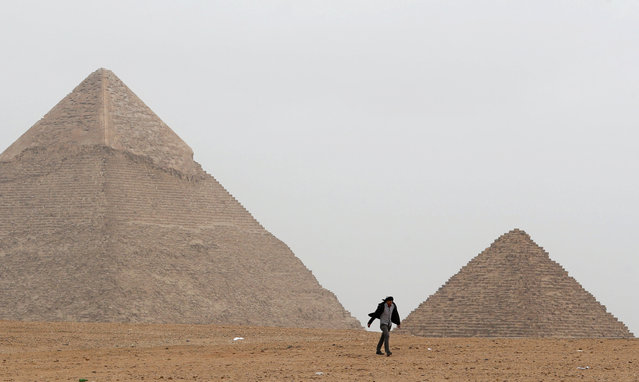 A man walks in front of the Great Pyramids in Giza, on the outskirts of Cairo, Egypt February 15, 2019. (Photo by Mohamed Abd El Ghany/Reuters) 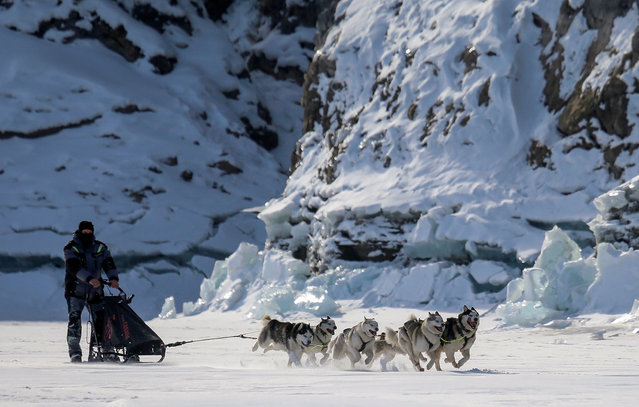 A musher is pulled by a team of Siberian Husky dogs during a practice session on the frozen Biryusa River in the Siberian Taiga area outside Krasnoyarsk, Russia on February 20, 2019. (Photo by Ilya Naymushin/Reuters) 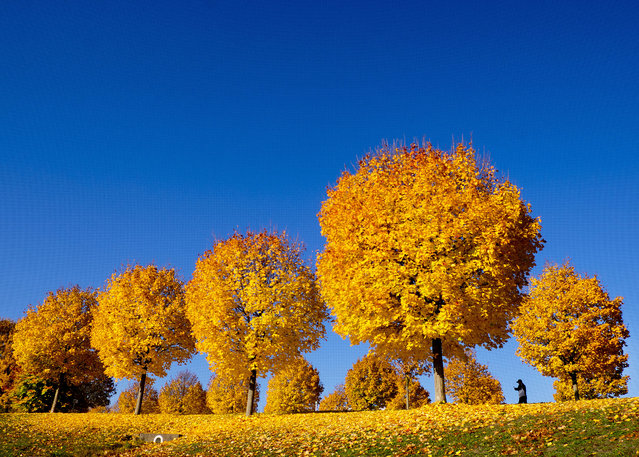 Yellow colored trees stand on a meadow under a blue sky in a park in Frankfurt, Germany, Wednesday, November 7, 2018. (Photo by Michael Probst/AP Photo) 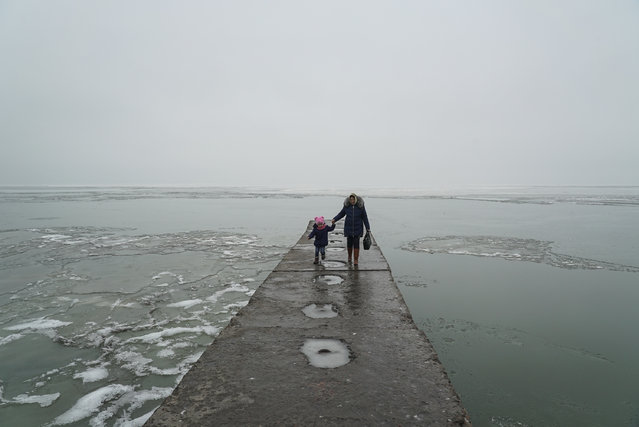 A woman with her child walks in the harbor of Mariupol, in the Sea of Azov, eastern Ukraine, Monday, Dece,ber 3, 2018. The Ukrainian military has been on increased readiness as part of martial law introduced in the country in the wake of the Nov. 25, 2018 incident in the Sea of Azov, in which the Russian coast guard fired upon and seized three Ukrainian navy vessels along with their crews. (Photo by Evgeniy Maloletka/AP Photo) 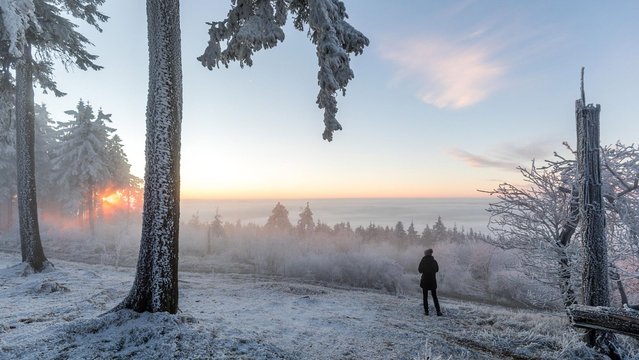