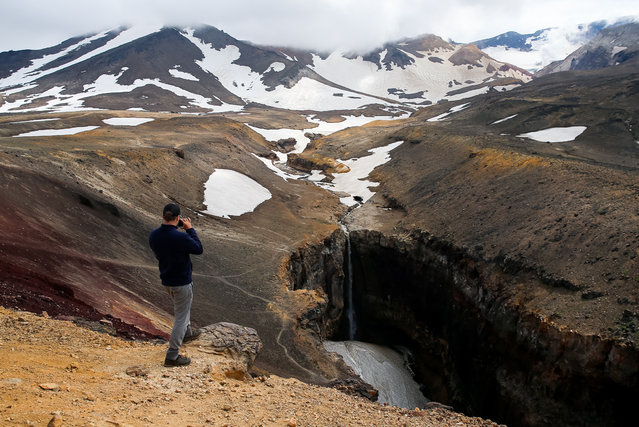 A tourist takes a photograph of a waterfall on the Vulkannaya River in Opasny Canyon at the foot of Mount Mutnovsky in the Southern Kamchatka Regional Nature Park, on Russia's Pacific coast on July 15, 2020. The Southern Kamchatka Regional Park is part of a group of nature parks known as the Volcanoes of Kamchatka Park, which has been on the UNESCO World Heritage List since 1996. (Photo by Yelena Vereshchaka/TASS) 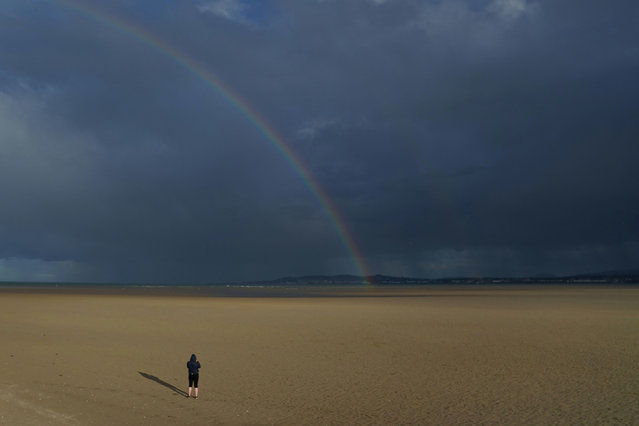 A person looks at the rainbow and heavy rain from a distance while walking along an empty beach in sunshine, following the outbreak of the coronavirus disease (COVID-19), in Dublin, Ireland, June 5, 2020. (Photo by Clodagh Kilcoyne/Reuters) 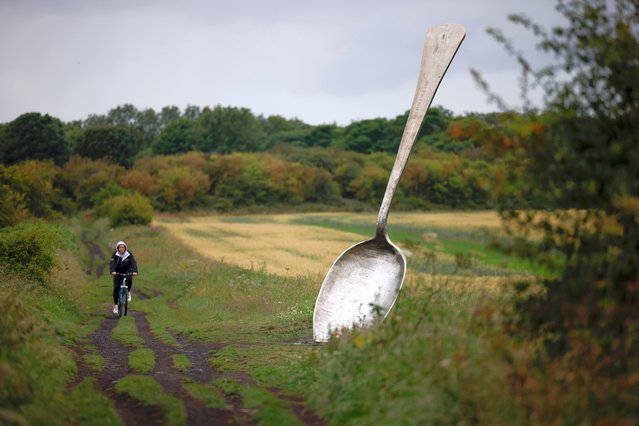 Eat For England, a 15 ft Spoon created by artist Bob Budd sits between two farmers fields on July 20, 2020 in Cramlington, United Kingdom. The scupture was commissioned in 2006 as part of a National Lottery funded art trail in Northumberland. (Photo by Christopher Furlong/Getty Images) 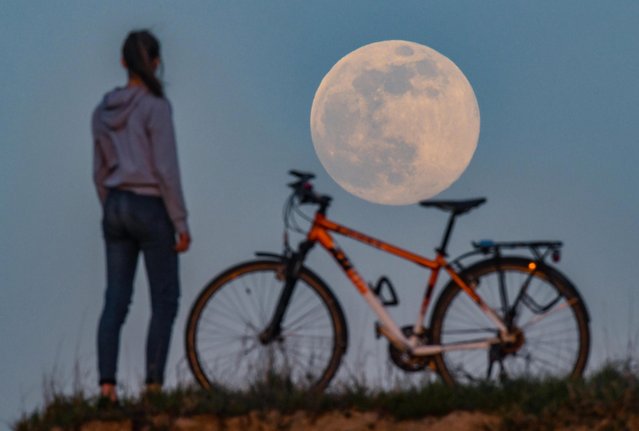 The moon rises as a so-called super moon, while on a hill a girl stands next to her bicycle and admires the spectacle in Brandenburg, Sieversdorf, Germany on April 7, 2020. The moon reaches its perigee, i.e. the point closest to the Earth's orbit, on the night of 7-8 April as a full moon and therefore appears particularly large to the human observer. (Photo by Patrick Pleul/dpa-Zentralbild/dpa via ZUMA Press) 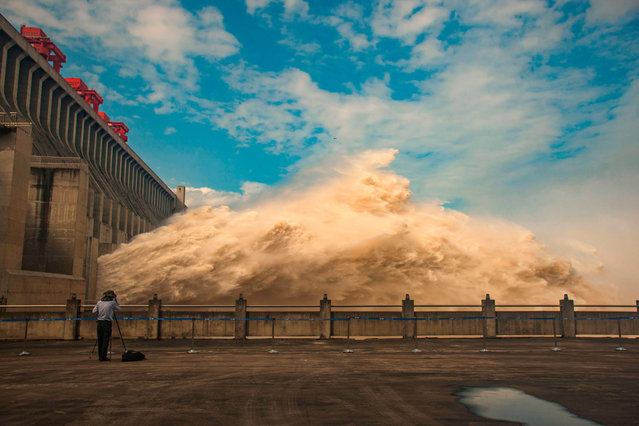 This photo taken on July 19, 2020 shows a person taking photos while water is released from the Three Gorges Dam, a gigantic hydropower project on the Yangtze river, to relieve flood pressure in Yichang, central China's Hubei province. Rising waters across central and eastern China have left over 140 people dead or missing, and floods have affected almost 24 million since the start of July, according to the ministry of emergency management. (Photo by AFP Photo/China Stringer Network) 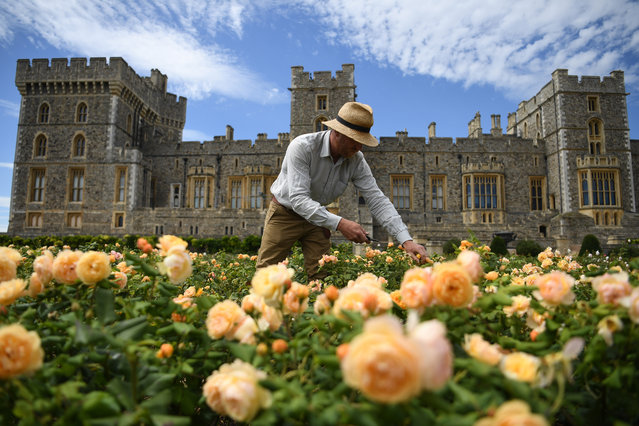 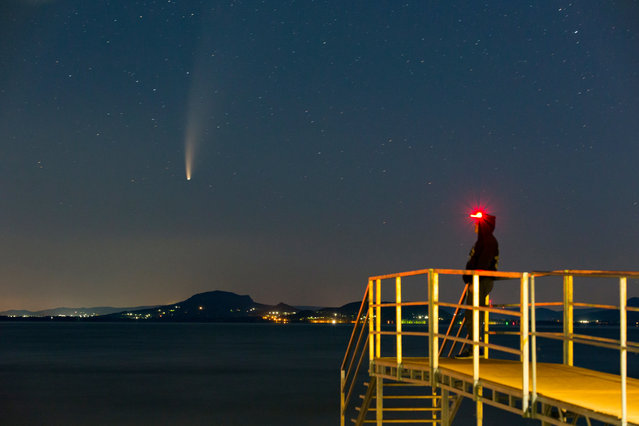 The Comet NEOWISE or C/2020 F3 is seen before sunrise over Balatonmariafurdo, Hungary, 14 July 2020. The comet passed closest to the Sun on 03 July and its closest approach to Earth will occur on 23 July. (Photo by György Varga/EPA/EFE) 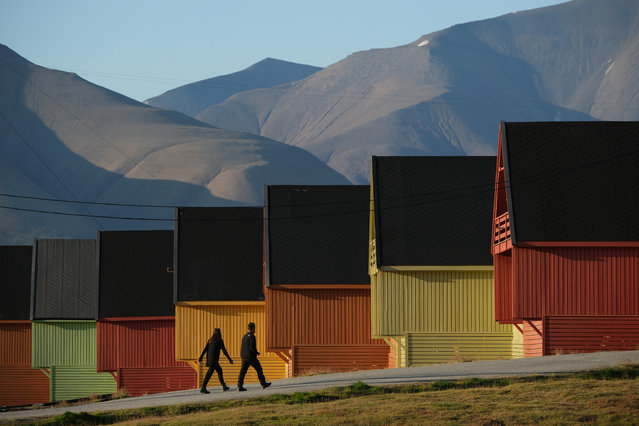 People walk past houses as mountains devoid of snow stand behind during a summer heat wave on Svalbard archipelago on July 30, 2020 in Longyearbyen, Norway. Svalbard archipelago, which lies approximately 1,200km north of the Arctic Circle, is currently experiencing a summer heat wave that set a new record in Longyearbyen on July 25 with a high of 21.7 degrees Celsius. Global warming is having a dramatic impact on Svalbard that, according to Norwegian meteorological data, includes a rise in average winter temperatures of 10 degrees Celsius over the past 30 years, creating disruptions to the entire local ecosystem. (Photo by Sean Gallup/Getty Images) 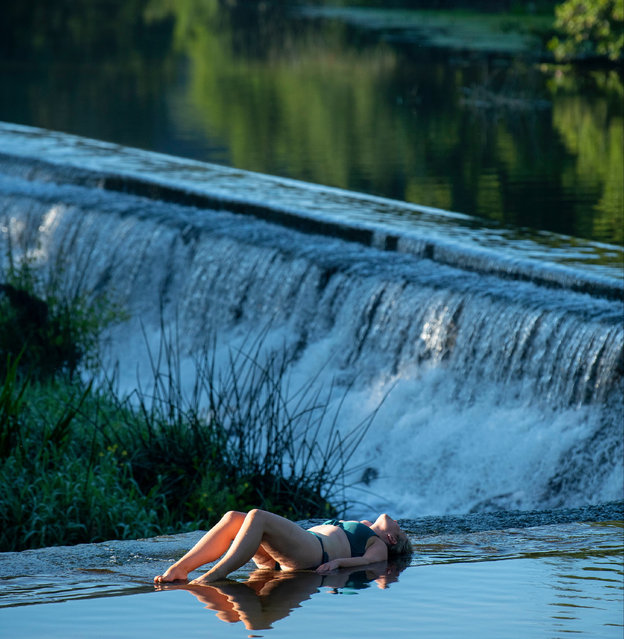 A woman cools off at Warleigh Weir on the River Avon near Bath, largest city in the county of Somerset, England on August 7, 2020. (Photo by Andrew Lloyd/The Sun) 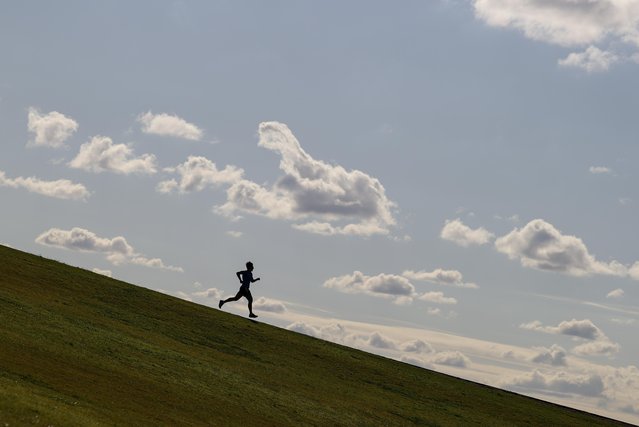 A runner exercises on a hill at Sydney Park amidst the easing of restrictions implemented to curb the spread of the coronavirus disease (COVID-19) in Sydney, Australia, June 26, 2020. (Photo by Loren Elliott/Reuters) 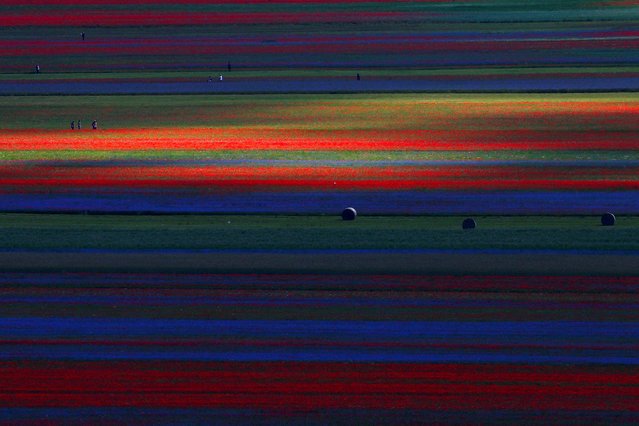 A view of fields of flowers is seen during the annual blossom in Castelluccio, Italy, July 6, 2020. (Photo by Guglielmo Mangiapane/Reuters) 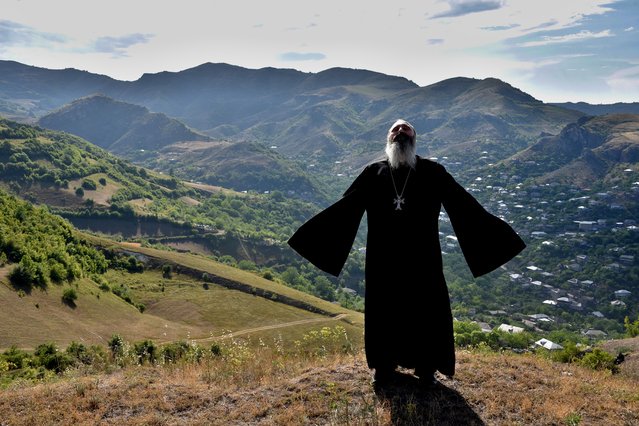 Priest Ter Abel prays for peace outside the village of Movses on the Armenian-Azerbaijani border on July 15, 2020. Defence officials in Armenia and Azerbaijan said fighting on their border subsided on July 15, 2020 after several days of deadly clashes raised fears of a major flare-up. At least 16 people on both sides were killed in three days of shelling that started Sunday between the ex-Soviet republics, which have been locked for decades in a conflict over Azerbaijan's separatist region of Nagorny Karabakh. (Photo by Karen Minasyan/AFP Photo) 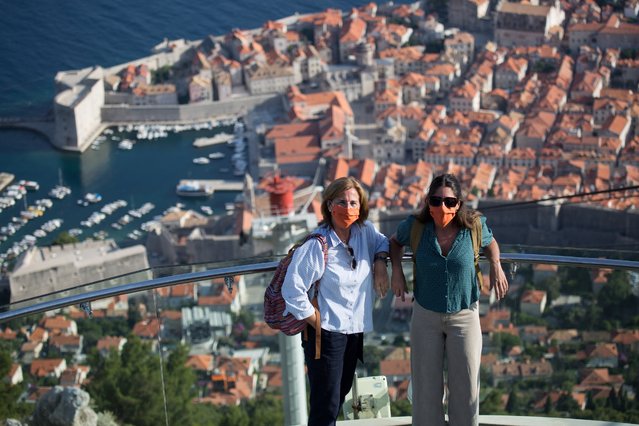 Tourists with protective masks stay on cable car upper station above the old town of Dubrovnik, Croatia, on July 13, 2020, as the country faces shortage of tourists amid the crisis linked with the Covid-19 pandemic caused by the novel coronavirus. (Photo by Ivan Vukovic/AFP Photo) 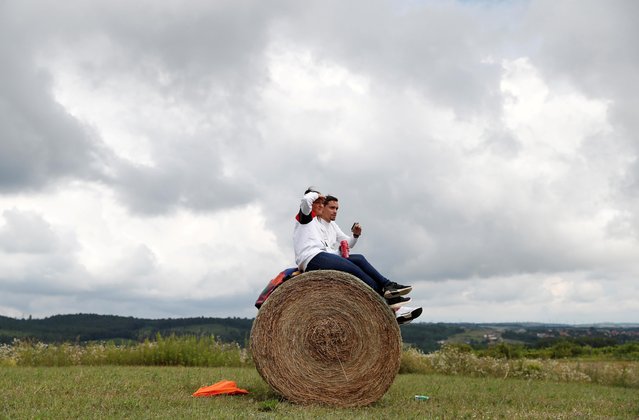 F1 fans watch the race from a hill outside the circuit during the Hungarian Grand Prix in Hungaroring, Budapest, Hungary on July 19, 2020. (Photo by Bernadett Szabo/Reuters) 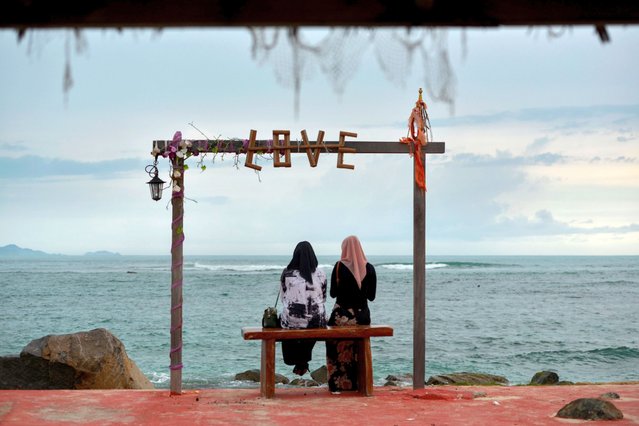 People gather at a cafe which reopened for visitors along a beach at Lhoknga, Aceh province, Indonesia on July 19, 2020. (Photo by Chaideer Mahyuddin/AFP Photo) 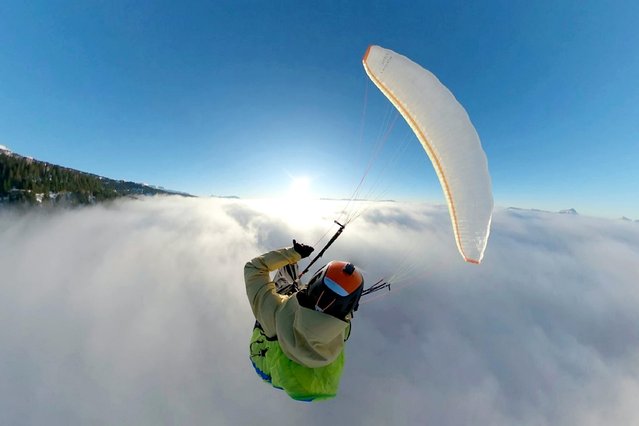 The photo shows 31-year-old film-maker Etienne Mérel captured himself soaring through the clouds on a paraglider above his base in the mountains of Grenoble, France on July 9, 2020. (Photo by Etienne Merel/South West News Service) 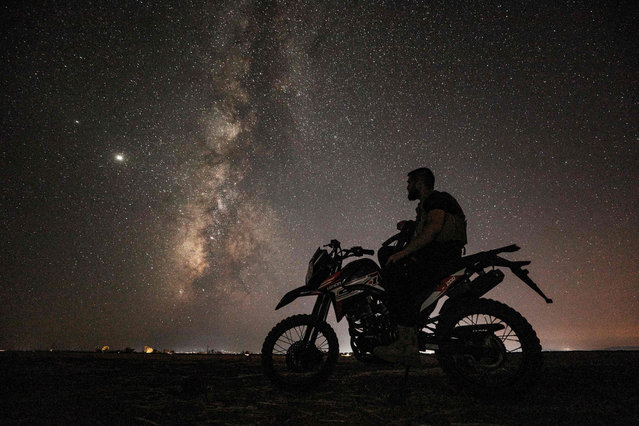 This long-exposure picture taken early on July 23, 2020, shows the Milky Way galaxy rising in the sky above a Syrian fighter of the Turkish-backed National Front for Liberation group on a motorcycle in the town of Taftanaz along the frontlines in the country's rebel-held northwestern Idlib province. (Photo by Omar Haj Kadour/AFP Photo) 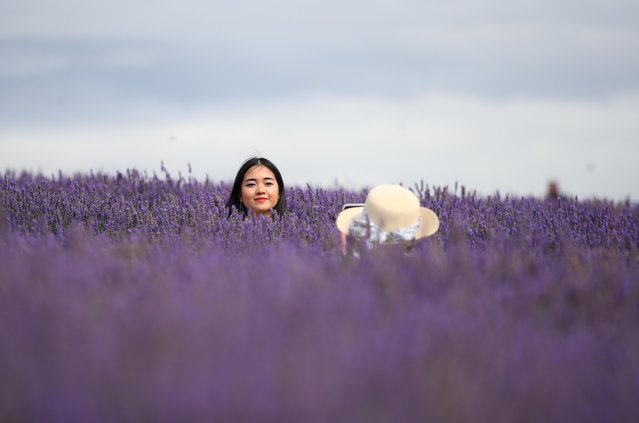 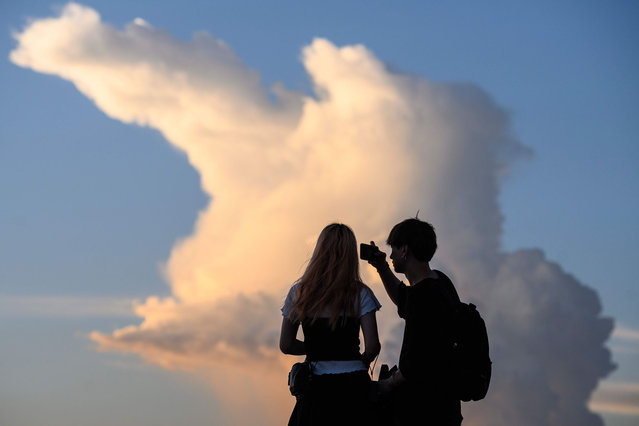