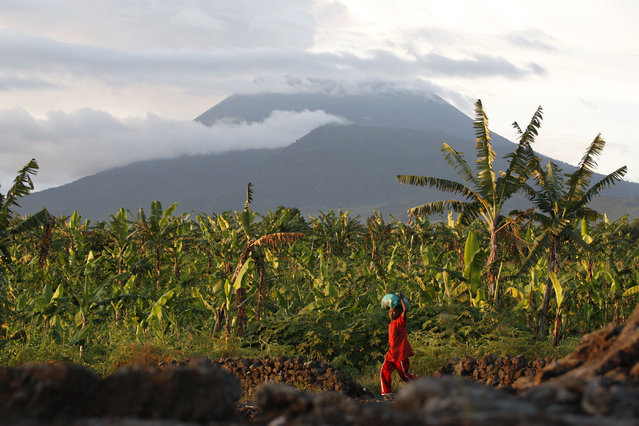 In this March 29, 2010 file photo, a resident walks past banana trees near the base of Mount Nyiragongo, one of Africa's most active volcanos, in Goma, Congo. Traumatized farmers are slowly returning to fields decimated by the 2002 eruption of Mount Nyiragongo in eastern Congo. Flowing lava flattened more than 30 percent of the city of Goma, 20 kilometers away. (Photo by Rebecca Blackwell/AP Photo) 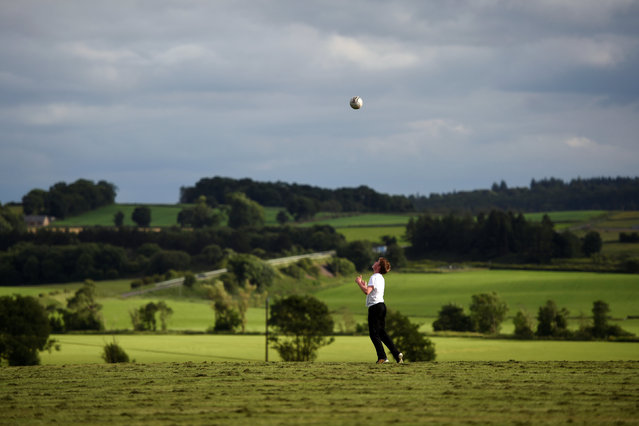 A young boy plays football on the historic battlefield site of Bannockburn on the eve of the battle's anniversary ahead of Thursday's EU Referendum in Scotland, June 22, 2016. (Photo by Clodagh Kilcoyne/Reuters) 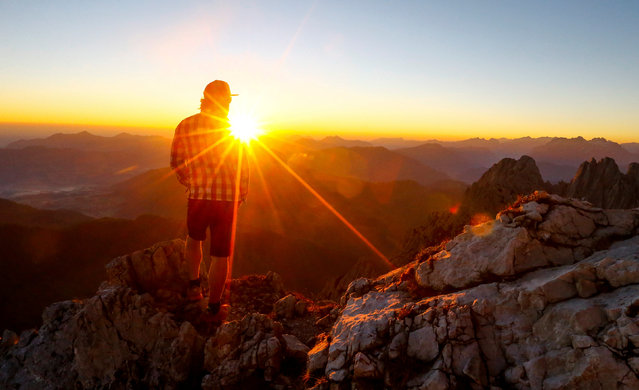 A man watches the sunrise from the peak of the Kaiser Mountains on a summer day in Ellmau, Austria June 24, 2016. (Photo by Dominic Ebenbichler/Reuters) 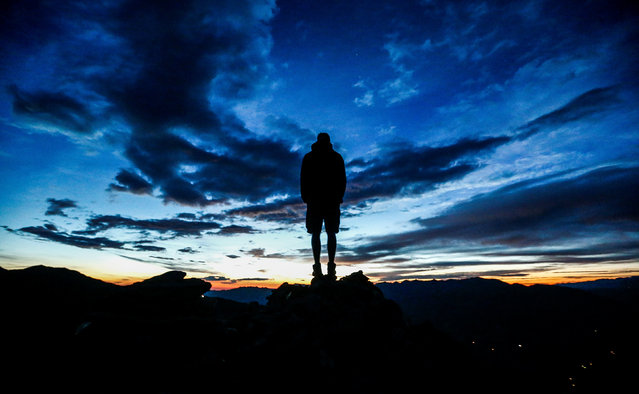 A man stands during sunrise on Kreuzjoch mountain in the Zillertal Alps in Schwendau, Austria July 11 2016. (Photo by Dominic Ebenbichler/Reuters) 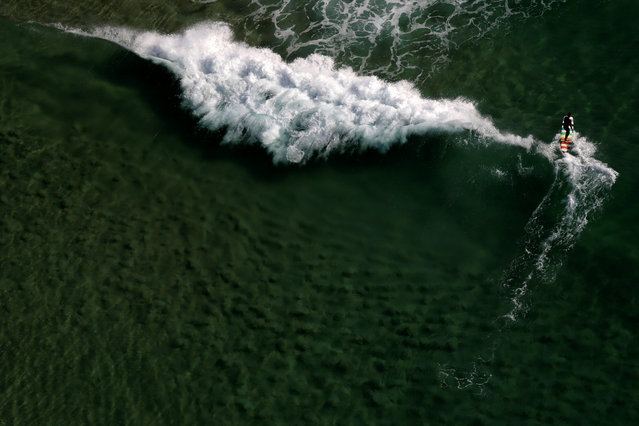 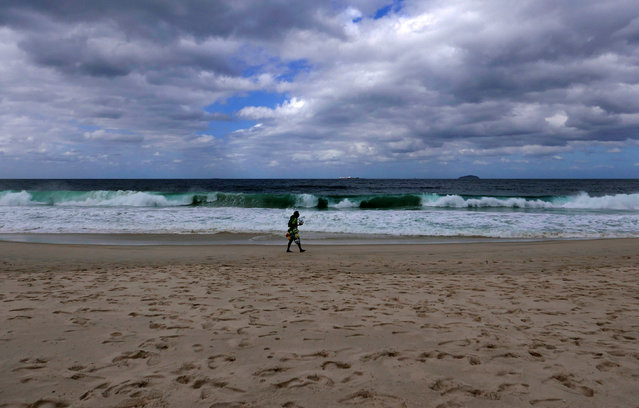 A man walks on Copacabana beach ahead of the 2016 Rio Olympic games in Rio de Janeiro, Brazil, July 17, 2016. (Photo by Stoyan Nenov/Reuters) 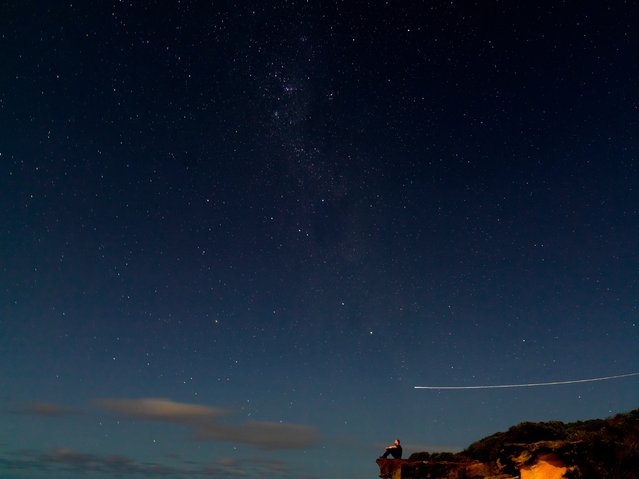 Dr Duane Hamacher in the Royal national park, Bundeena, Sydney. Hamacher is looking to the heavens to unlock secrets about Australia’s ancient past. His Indigenous astronomy group works with Aboriginal Australians from different language groups to compile legends thought to document cosmic events and natural disasters, such as meteorite strikes, floods and volcanic eruptions. Hamacher, who compares these legends with the geological record, has linked one, describing a vengeful fire-devil from the sky, to a meteorite impact in the central desert about 4,700 years ago. (Photo by Tamara Dean/UNSW) 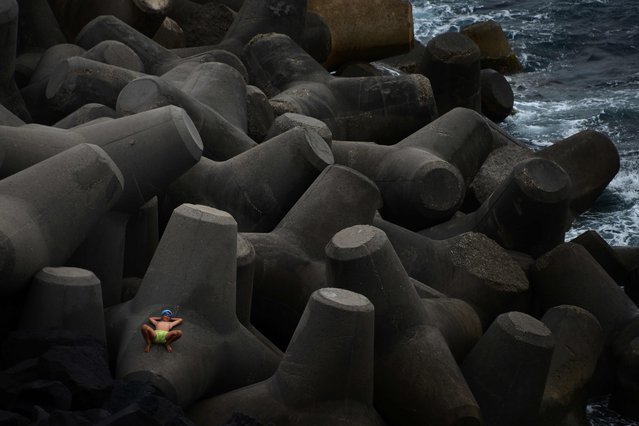 A boy rests on concrete blocks near the small port of Ginostra on June 16, 2016 on the island of Stromboli. Stromboli is part of the Aeolian Islands a volcanic archipelago in the Tyrrhenian Sea, north of Sicily. (Photo by Gabriel Bouys/AFP Photo) 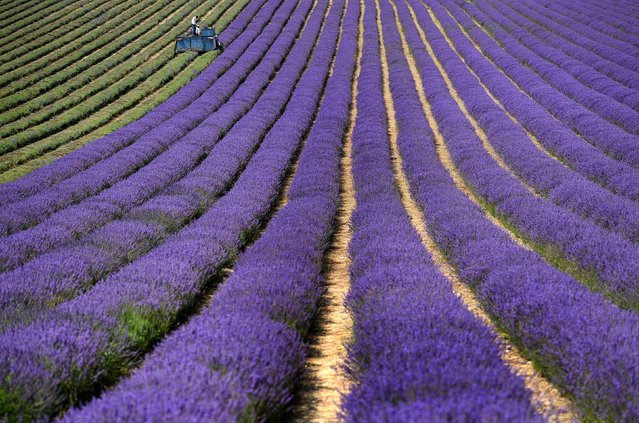 A tractor makes it's way up a row of lavender as it is harvested on the Lordington Lavender farm in West Sussex southeast England Wednesday July 20, 2016. (Photo by Andrew Matthews/PA Wire via AP Photo) 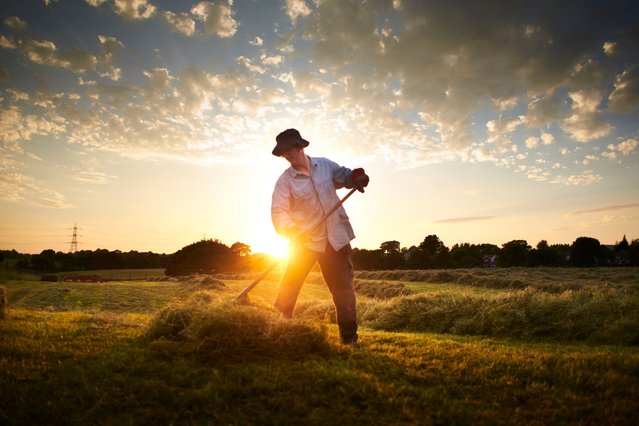 Farmers making hay while the sun shines in Bury, UK on July 20, 2016. The race is on to bale the cut grass before the predicted thunderstorms arrive. (Photo by Christopher Thomond/The Guardian) 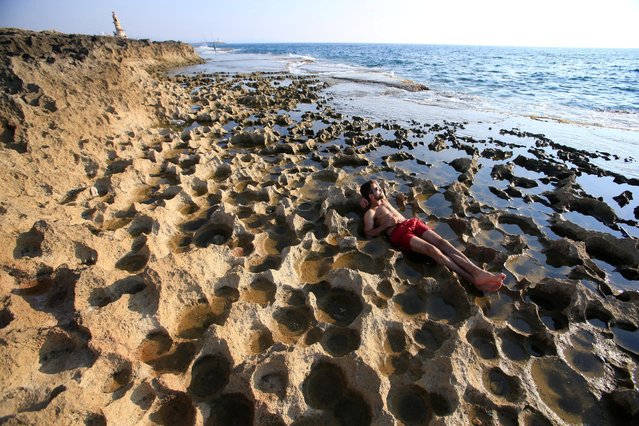 A man enjoys the beach at a tiny island in Sidon, southern Lebanon, July 17, 2016. (Photo by Ali Hashisho/Reuters) 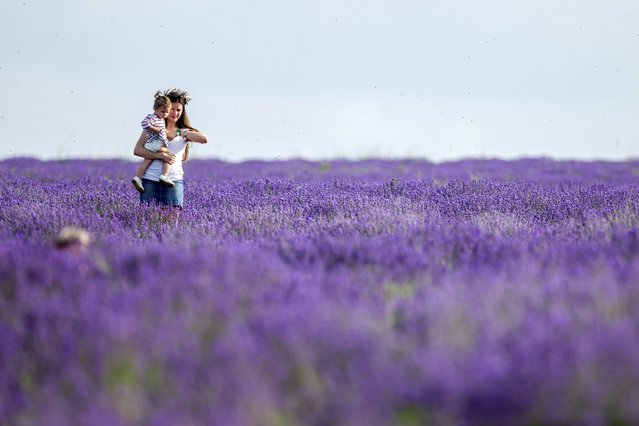 A mother with her daughter walk in a lavender field at “Lavender Fest” festival, held in a lavender field near Cobusca Noua village, 44 Km North-East from Chisinau, Moldova, 18 June 2016. “Lavender Fest” is a natural event held for the second year in this place, dedicated to health and beauty coming from the nature, vegetarian food, as well as to the promotion of local brands and artisans. (Photo by Dumitru Doru/EPA) 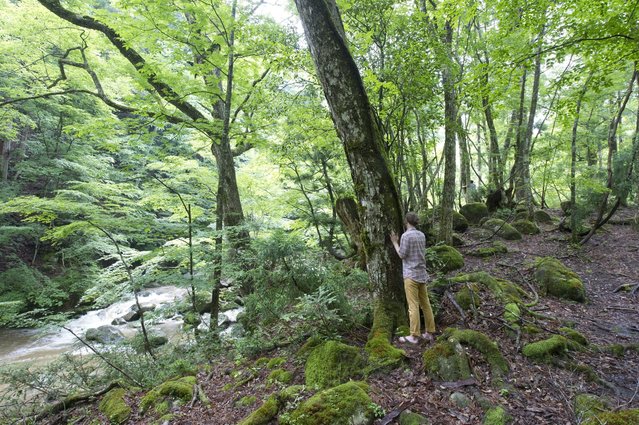 A photo made available on 22 June 2016 shows a tourist as he hugs a tree during a tree therapy workshop in Chizu city, Tottori prefecture, Japan, 21 June 2016. Participants in the workshop get to experience the healing qualities of being in a forest environment. With the decline in the population and local forestry industry the town of Chizu has turned to tourism for economic development. (Photo by Everett Kennedy Brown/EPA) 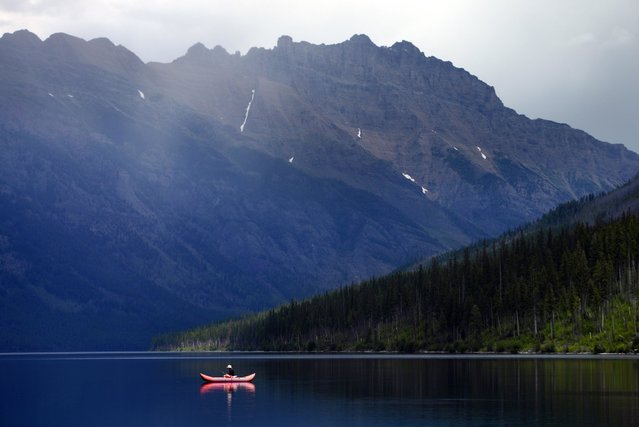 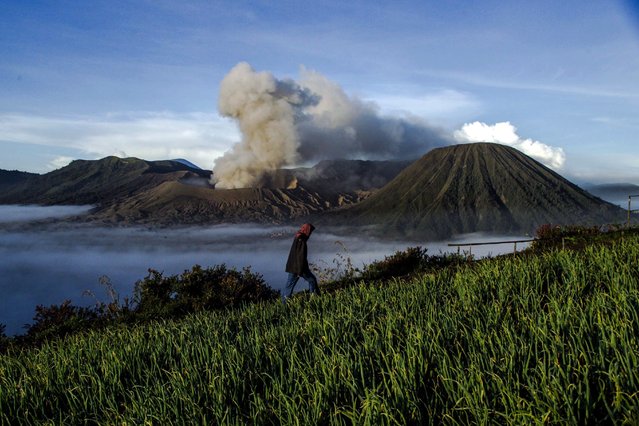 A man walks at a field as Mount Bromo (background) spews ashes into the air during a volcanic eruption ahead of the Hindus Kasada ceremony in Probolinggo, East Java, Indonesia, 20 July 2016. The Kasada ceremony, which will be held on 21 July, is a way for Tengger Hindus to express their gratitude to the Gods for good harvest and fortune that was bestowed on them. The peak of the annual Kasada ceremony as per tradition sees worshippers climbing Mount Bromo in the early morning and throwing offerings into the volcano's crater. The offerings range from vegetables to chickens, from fruits to goats, from money to other valuables. (Photo by Fully Handoko/EPA) 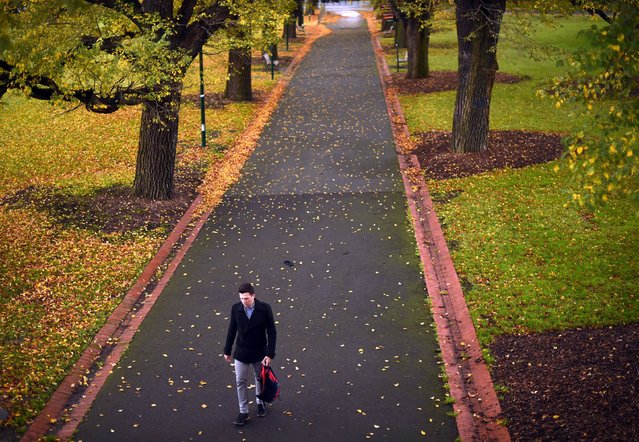 A man walks past a line of trees on a rainy day in Melbourne, Australia on June 17, 2016. (Photo by Saeed Khan/AFP Photo) 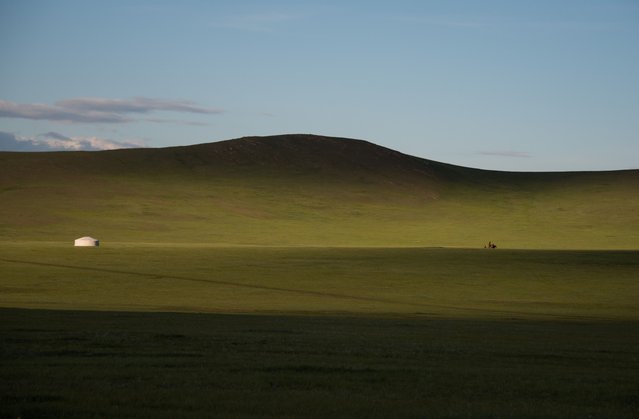 A man rides his horse next to a ger near Zuunmod south of Ulan Bator on June 29, 2016. Mongolians went to the polls across their sprawling, sparsely-populated country on June 29 as it struggles to benefit from its vast natural resources amid disputes over foreign investment and slumping demand from neighbouring China. It took Mongolian nomad Pagvajaviin Shatarbaatar seven days to get to his polling station to vote in in the general election – accompanied by more than 2,000 sheep, goats and horses. (Photo by Johannes Eisele/AFP Photo) 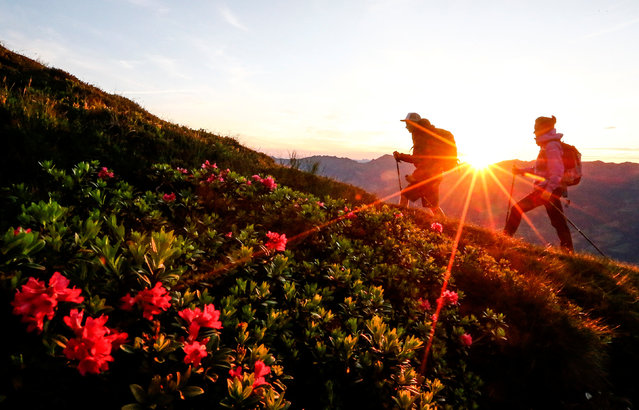 A couple hikes during sunrise on Kreuzjoch mountain in the Zillertal Alps in Schwendau, Austria July 11, 2016. (Photo by Dominic Ebenbichler/Reuters) 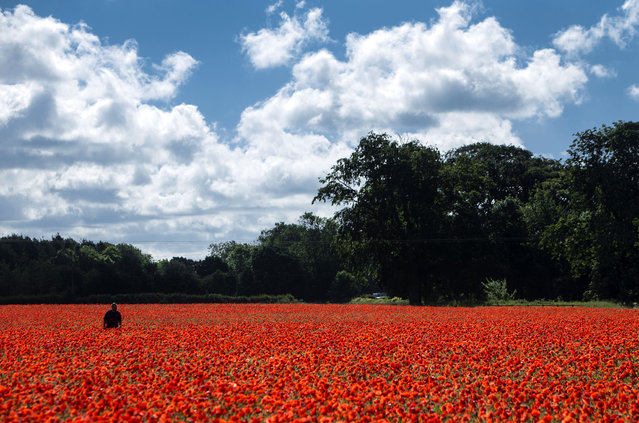 A poppy field near York as the UK and France prepare to commemorate the Battle of the Somme on Thursday June 30, 2016. The Queen and senior royals will lead the nation in remembrance to mark the centenary of the Battle of the Somme. Events across the UK and in France will commemorate the start of the battle on July 1 1916, a day that became the bloodiest in British military history with almost 20,000 dead. (Photo by Danny Lawson/PA Wire) 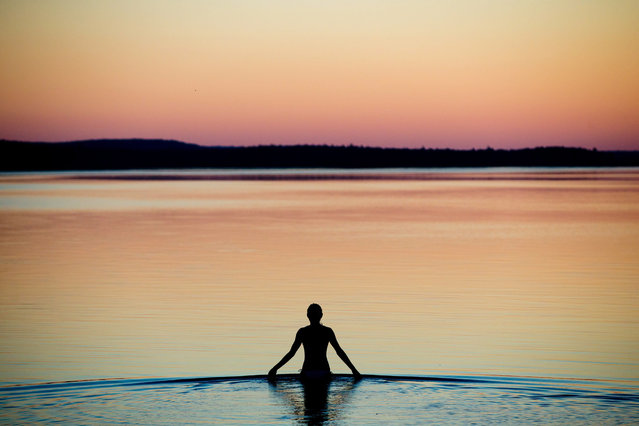 A photo made available 24 June 2016 of a young woman wading in the shallow waters of the Brombach Lake near Pleinfeld, Bavaria state, Germany, as the sun sets here on 23 June 2016 evening. (Photo by Daniel Karmann/EPA) 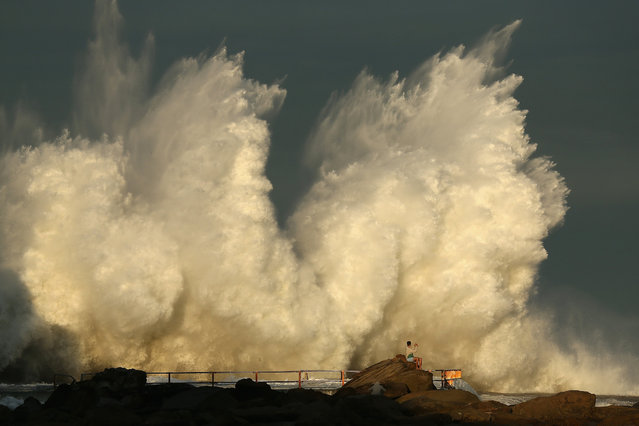