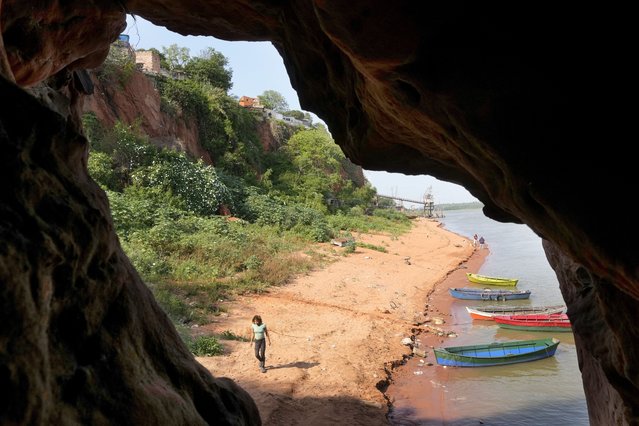 Framed through a cave opening at Ita Pyta Punta or Cape Red Rock, empty boats sit moored on the banks of the Paraguay River, in Asuncion, Paraguay, Wednesday, September 22, 2021. Paraguay's crucial outlet to the sea fell to its lowest level the following day, in at least 117 years, threatening massive economic losses to the small South American nation. (Photo by Jorge Saenz/AP Photo) 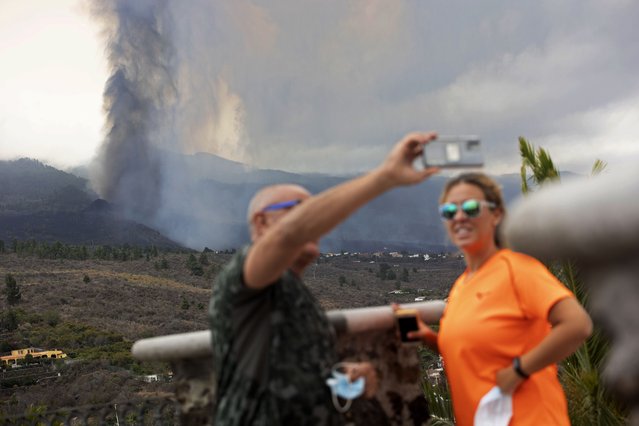 A couple take selfies in front of the eruption of a volcano near El Paso on the island of La Palma in the Canaries, Spain, Monday, September 20, 2021. Lava continues to flow slowly from a volcano that erupted in Spain's Canary Islands off northwest Africa. Officials say they are not expecting any other eruption and no lives are currently in danger. (Photo by Gerardo Ojeda/AP Photo) 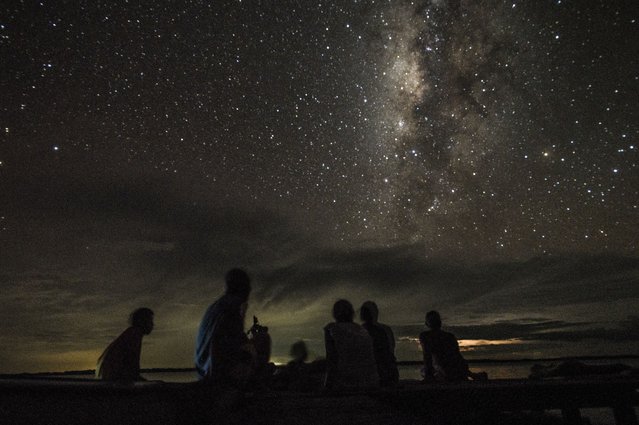 People look at the milky way in the night sky of Ologa, in Zulia state, Venezuela, on September 6, 2021. (Photo by Federico Parra/AFP Photo) 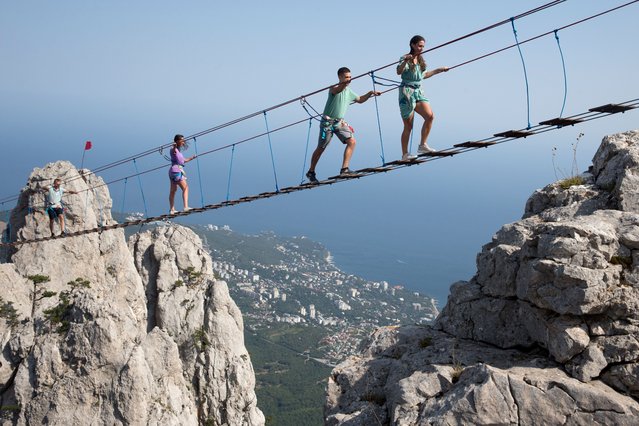 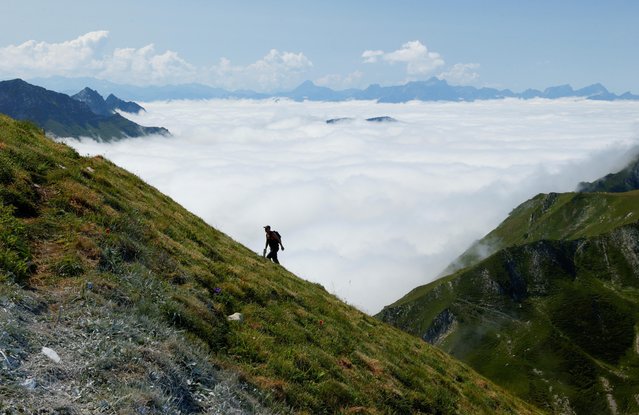 A hiker walks up to the Moleson summit during a cloud inversion in Gruyeres, Switzerland on August 25, 2021. (Photo by Denis Balibouse/Reuters) 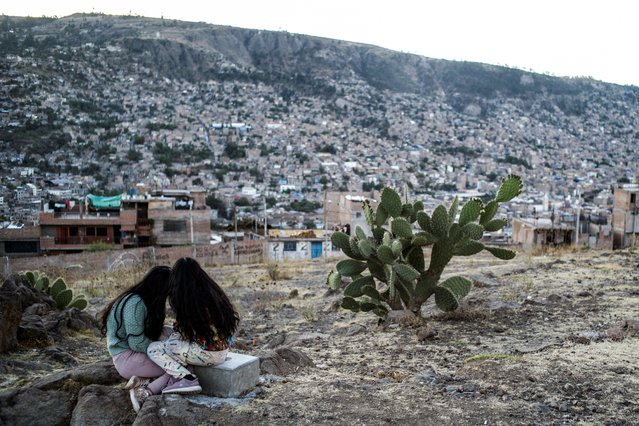 Two girls sit in a park in a region where Shining Path, the Peruvian guerrilla group whose founder Abimael Guzman recently died, was once active, in Ayacucho, Peru on September 12, 2021. (Photo by Alessandro Cinque/Reuters) 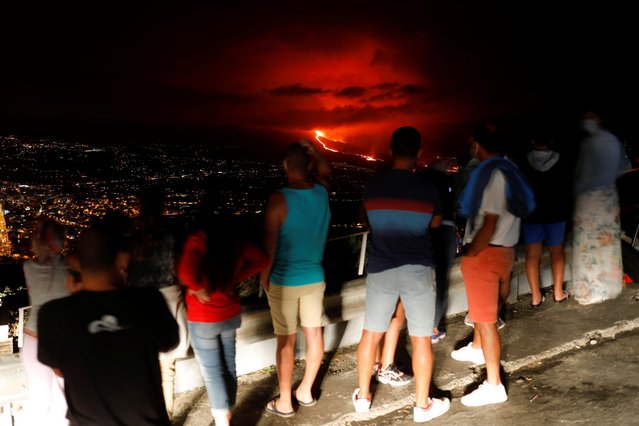 People watch lava following the eruption of a volcano on the Canary Island of La Palma, in Tijarafe, Spain, September 25, 2021. (Photo by Jon Nazca/Reuters) 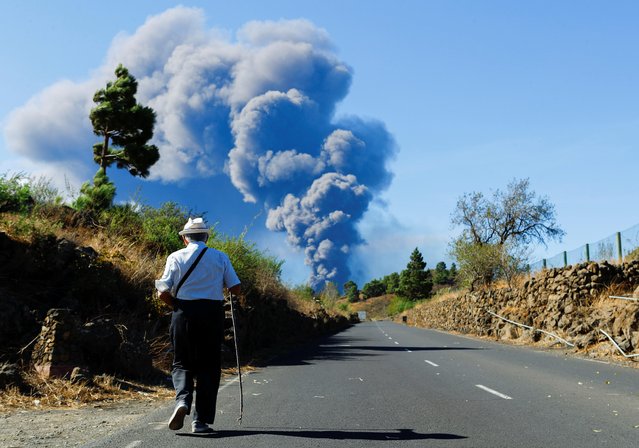 A man walks along an El Paso road while observing a large ash column from the Cumbre Vieja volcano on the Canary Island of La Palma, Spain, October 4, 2021. (Photo by Borja Suarez/Reuters) 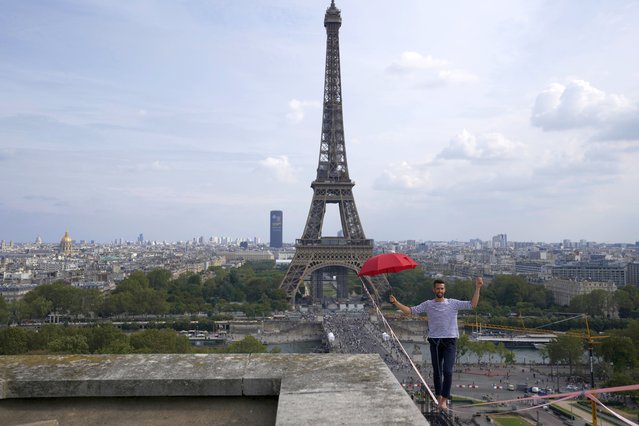 French slackliner Nathan Paulin performs on the second time on a 70-meter-high slackline between the Eiffel Tower and the Chaillot Theater across the Seine River, in Paris Sunday, September 19, 2021. (Photo by Francois Mori/AP Photo) 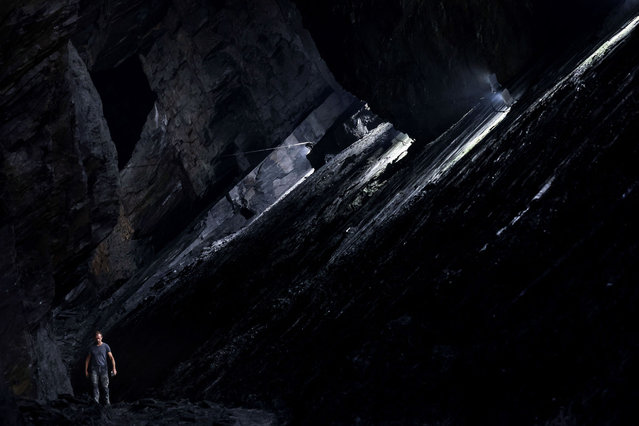 Belgian miner Vincent Theret, said to be the last miner of Belgium, works at the “Grand ouvrage” shale mine in Alle, near Semois, on September 17, 2021. In this impressive cathedral-like cavity on the heights of the village of Alle-sur-Semois, he recovers the waste left behind by the miners who extracted the slate. He then “revalorises” this emblematic schist of the region, to make tiles, sinks, coping stones for swimming pools.Inside the gallery, damp and dark, lit by spotlights, he handles his excavator to load tons of stones (Photo by Kenzo Tribouillard/AFP Photo) 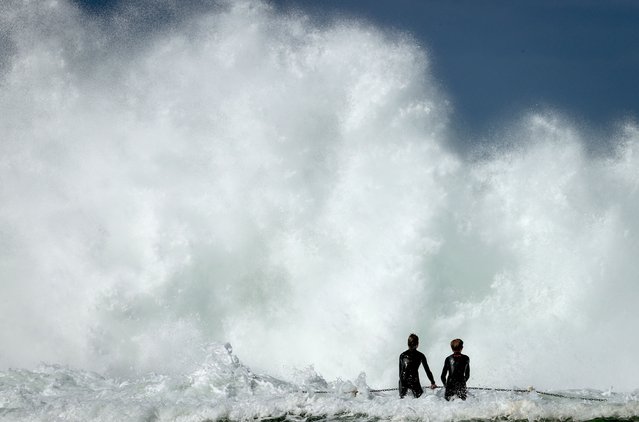 Two boys hold onto a rail at the North Narrabeen Beach rock pool as large waves break towards them on August 25, 2021 in Sydney, Australia. The Bureau of Meteorology has issued severe weather warnings for coastal areas of Sydney and parts of NSW with damaging surf and winds exceeding 100km/h set to batter the state. (Photo by David Gray/Getty Images) 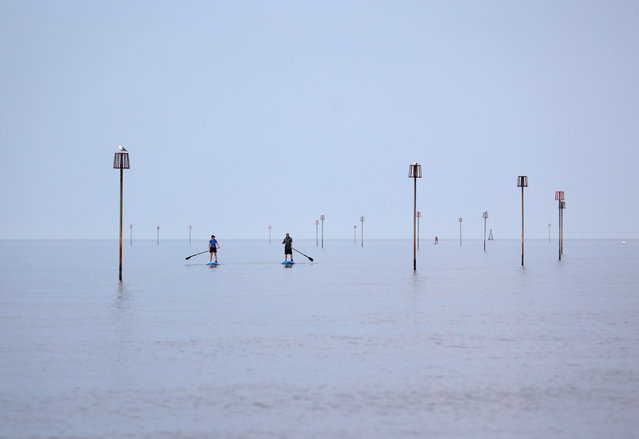 Paddleboarders on a very calm sea around these sea defence groyne markers at Heacham, Norfolk, on September 16, 2021. (Photo by Paul Marriott/Rex Features/Shutterstock) 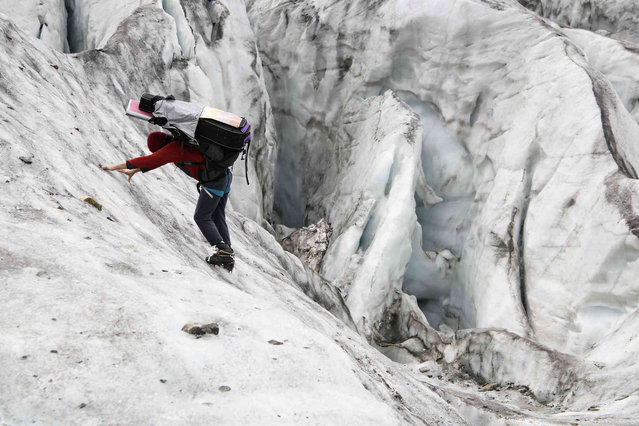 Florian Vella, Guitar, from left, of the French Band Tournee des Refuges, walks his musical instruments on his back, on the Gorner Glacier (Gornergletscher) towards the Monte Rosa Hut (2883m), during the Zermatt Music Festival and Academy, above Zermatt, Switzerland, on Thursday, 16 September 2021. (Photo by Anthony Anex/Keystone via AP Photo) 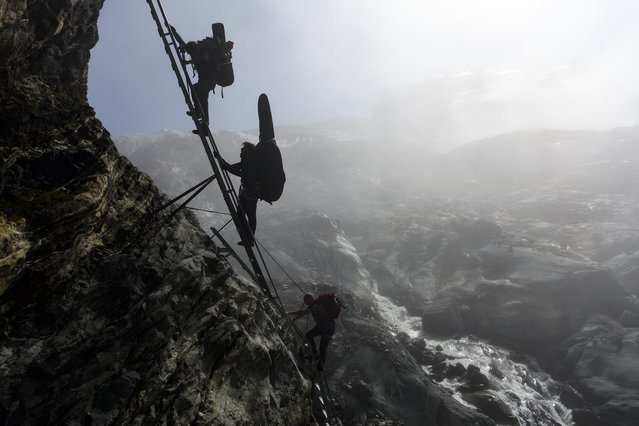 Gaspard Panfiloff, Guitar and Balalaika, top, Nesar Ouaryachi, Double bass, center, and Baptiste Ansion, production manager, of the French Band Tournee des Refuges, climb a ladder and come down with their musical instruments on their backs after having given a concert the day before at the Monte Rosa Hut (2883m), during the Zermatt Music Festival and Academy, above Zermatt, Switzerland, on Friday September 17, 2021. (Photo by Anthony Anex/Keystone via AP Photo) 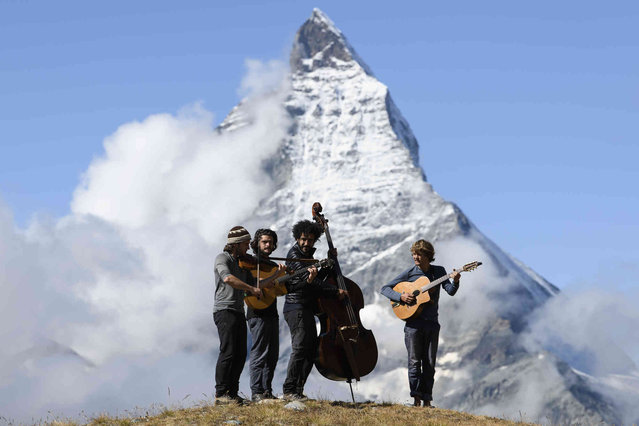 Jean-Christophe Gairard, Violin, Florian Vella, Guitar, Nesar Ouaryachi, Double bass, and Gaspard Panfiloff, Guitar and Balalaika, of the French Band Tournee des Refuges, from left, play with their musical instruments in front of the Cervin (Matterhorn) Mountain after having given a concert the day before at the Monte Rosa Hut (2883m), during the Zermatt Music Festival and Academy, above Zermatt, Switzerland, on Friday 17 September 2021. (Photo by Anthony Anex/Keystone via AP Photo)
Edit Del
28 Oct 2021 06:01:00, post received 0 comments
Publication archive:
←   →
Popular tags:
All tags
Last searches: