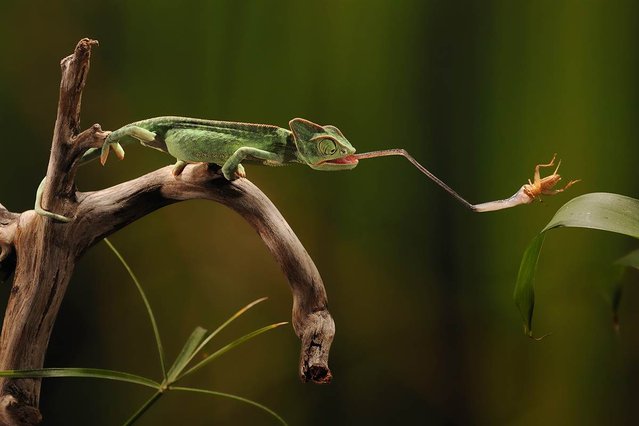 A veiled chameleon extends its tongue to catch a cricket. Canadian wildlife photographer Scott Linstead, formerly an aerospace engineer and high school teacher, uses a device called Phototrap “to not only photograph the elusive, but also the unimaginably quick”.

Phototrap “interfaces with either your camera or your flash”, he says, and it basically helps “trigger the shutter of your camera when the photographic subject passes through a defined position in space”.

In this photo, “the success of the image depends on the willingness of the captive chameleon to eat outside of its regular enclosure”, he says. “The veiled chameleon is the ideal chameleon species for this project as it is often less prone to stress during handling than other chameleon species”. (Photo by Scott Linstead) 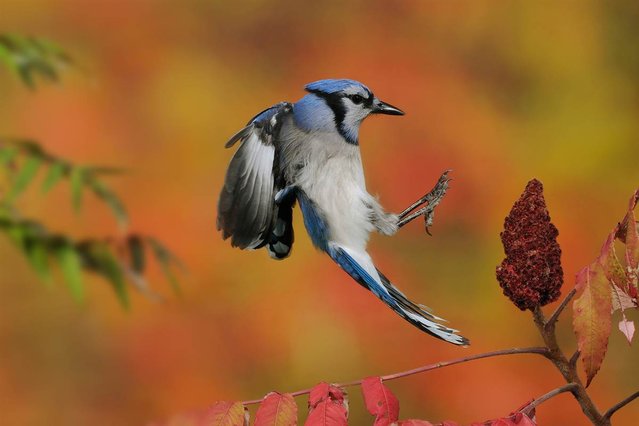 Blue Jays “can easily be lured into an outdoor photo set-up by leaving their favorite snack out: peanuts”, says Linstead. The photographer says his “purchase of a 500mm lens in 2006 quickly elevated avian photography from a serious hobby to the point of obsession”. (Photo by Scott Linstead) 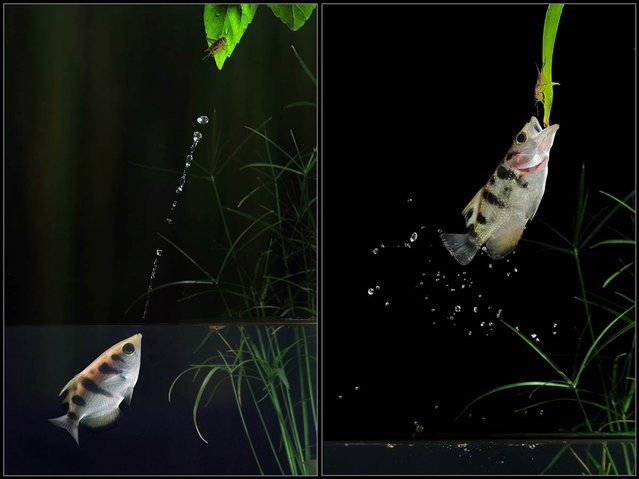 The photographer says the breach behavior was captured purely by chance while trying to photograph the spitting behavior. “When I lowered the “cricket perch” to the water's surface, the fish would jump out to try and grab it manually instead of the more sophisticated method that it is known for”, Linstead says. (Photo by Scott Linstead) 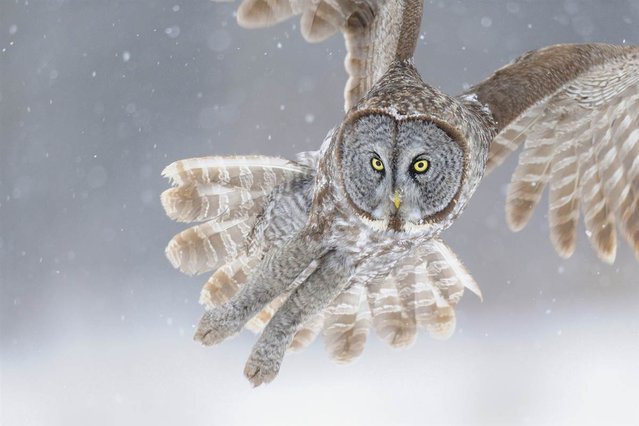 This beautiful owl was photographed in Ontario, Canada during a heavy snowstorm. “Shooting during the storm was a conscious decision to improve the value of the image through mood and atmosphere”, Linstead says. “What I did not plan on was an image showcasing the owl's legs, which have become a large part of the interest and continued publication of this image”. (Photo by Scott Linstead) 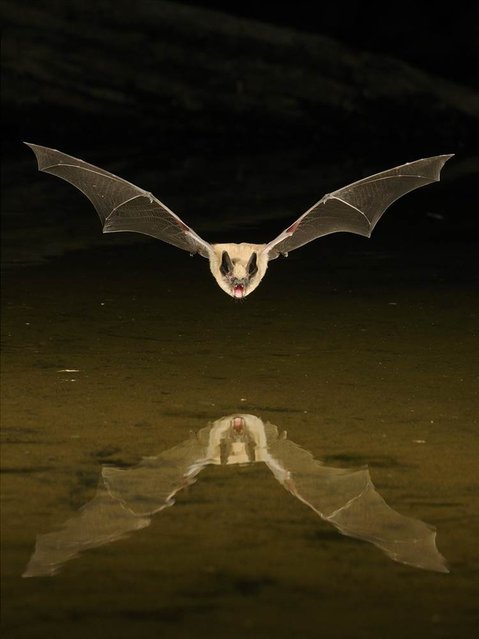 This bat was photographed at an artificial pond in the Arizona desert. The pond is an important resource for the bats in the desert's harsh climate. (Photo by Scott Linstead) 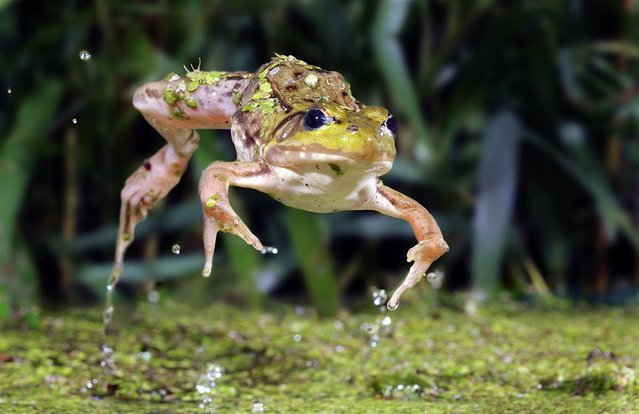 This shot of a Green frog represents one of Linstead's “earliest studio attempts with a local species”. “The “swamp” environment is a creation of mine involving native vegetation and a boot tray”, he says. (Photo by Scott Linstead) 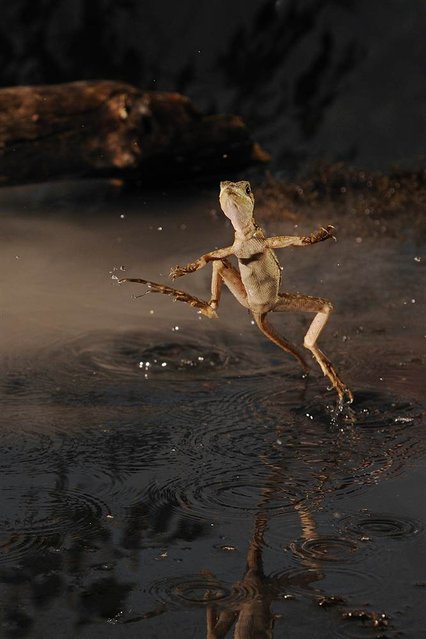 The Brown Basilisk is also referred to as the “Jesus Lizard”, “Jesus Christ Lizard” or “Lagarto de Jesus Cristo” for its ability to run on the surface of water. When the lizards flee from predators, they gather sufficient momentum to run across the water for a brief distance while holding most of their body out of the water.

This shot was taken in a rented warehouse space. It was “extremely difficult to photograph, given that they only run a couple times a day”, Linstead says. (Photo by Scott Linstead) 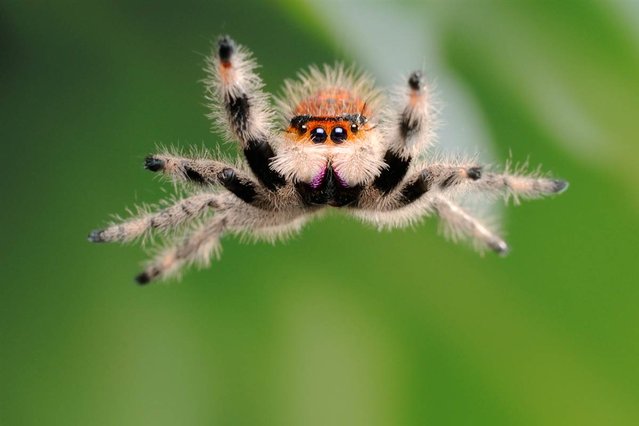 Floridian jumping spiders, says Linstead, “have these huge, forward-facing eyes, and although they have three more pairs of eyes that account for peripheral vision, once they detect movement, they tend to direct that largest pair at the source. This creates the impression that they are trying to engage us in eye contact”. (Photo by Scott Linstead) 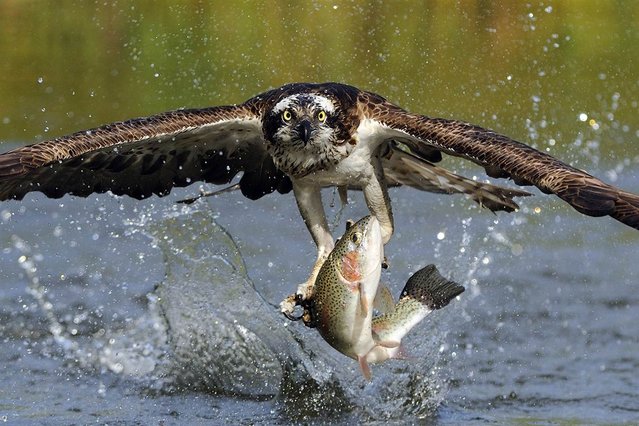 “The osprey image was a personal obsession of mine”, Linstead says. “I had the rare opportunity to spend four days in a tiny hide at the edge of a pond in Finland. This location near Tampere is arguably the best spot on earth to photograph this behavior”. (Photo by Scott Linstead) 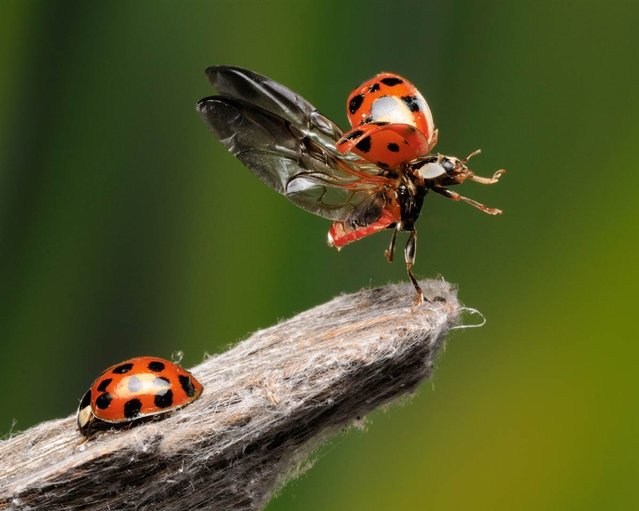 Most of us are used to seeing photos of ladybugs, like the one on the left – the familiar red-and-black round shell, and not much else. Linstead brings us a different dimension of the ladybug with the one on the right. While the photo looks like it was taken outdoors, he took the shot in a studio.

The beetles are drawn to light, he says, so he used a light source on a flower, but kept the light off until he was ready to take the photograph. “There are situations where eye contact simply does not work to an image’s advantage”, he says. “As photogenic as a ladybug can be while crawling on a leaf, in flight they appear rather awkward. The eye as well as the rest of the head is difficult to locate among the clutter of appendages. Their pleasingly symmetric shape transforms into a jagged array of wings, carapace halves, legs and the abdomen”. (Photo by Scott Linstead) 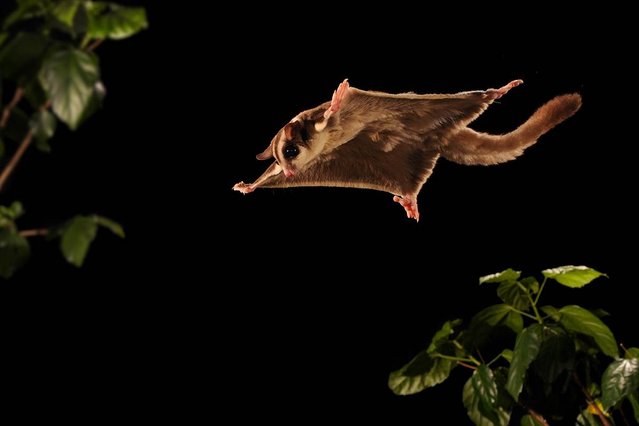 Linstead “had a brief opportuntiy to photograph this disagreeable creature (a marsupial) in captivity after business hours at a local pet store. I chose a black background as I thought I could get away with it given the nocturnal habits of this marsupial. The 'take off' perch to the right of the image was a cat's scratching post, and the glider is en route to his cage on the bottom left”. (Photo by Scott Linstead)
Edit Del
22 May 2012 11:32:00, post received 0 comments
Publication archive:
←   →
Popular tags:
All tags
Last searches: