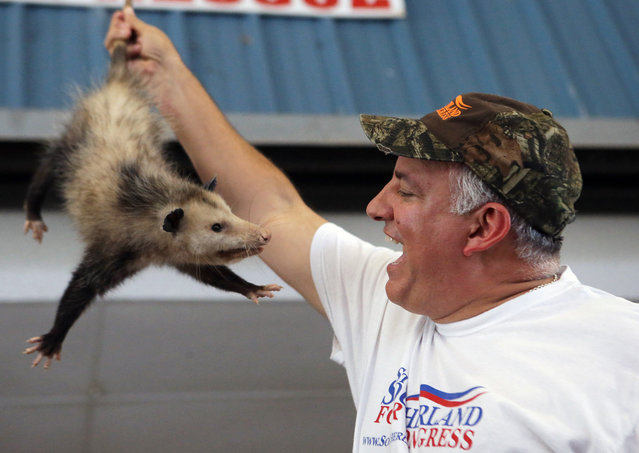 U.S. Rep Steve Southerland grins after winning an auctioned possum during the Wausau Possum Festival on Saturday, August 2, 2014, in Wausau, Fla. What is usually a must-attend event for statewide candidates was notably lacking of them this year, perhaps because candidates who now raise tens of millions of dollars focus more on television ads than making personal contact. But not attending is a missed opportunity, said Susan MacManus, a University of South Florida political science professor who drove more than 350 miles for the festival. (Photo by Heather Leiphart/AP Photo/The News Herald) 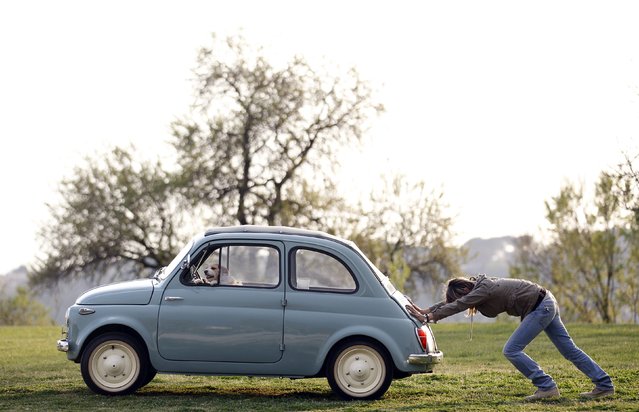 A woman pushes her Fiat 500 car as her dog sits inside, in a neighbourhood of Rome in this March 23, 2012 file photo. (Photo by Alessandro Bianchi/Reuters) 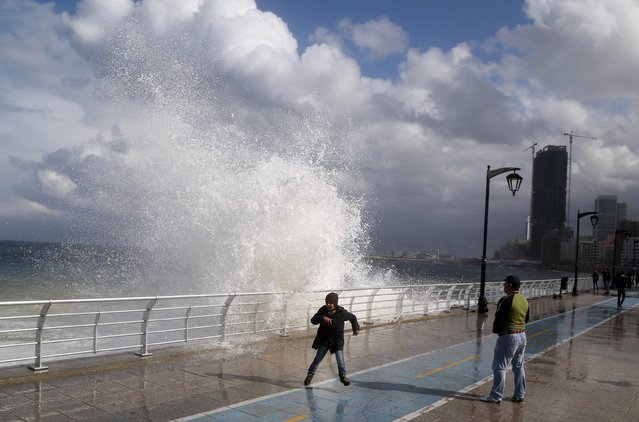 A boy plays in front of a wave crashing into Beirut's Corniche, a seaside promenade, as high winds sweep through Lebanon during a storm, November 26, 2014. (Photo by Aziz Taher/Reuters) 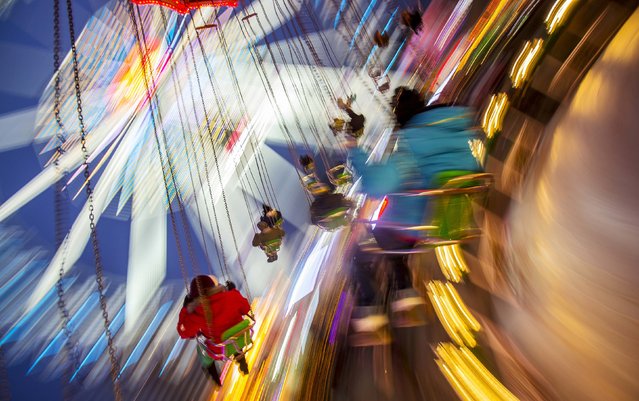 Children ride on a merry-go-round at a Christmas market in Berlin November 29, 2014. (Photo by Hannibal Hanschke/Reuters) 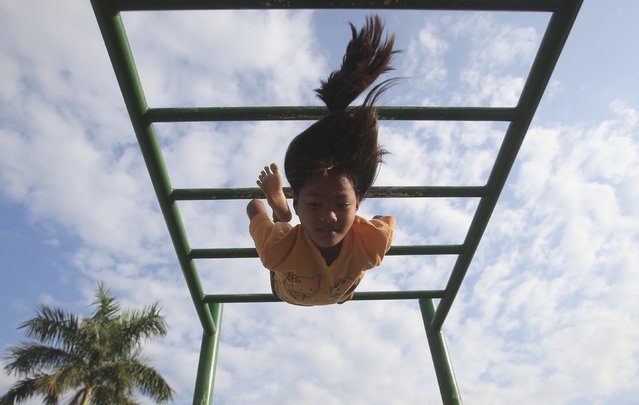 A girl swings upside down on a monkey bar at a playground near the banks of Tonle Sap river in Phnom Penh December 4, 2014. (Photo by Samrang Pring/Reuters) 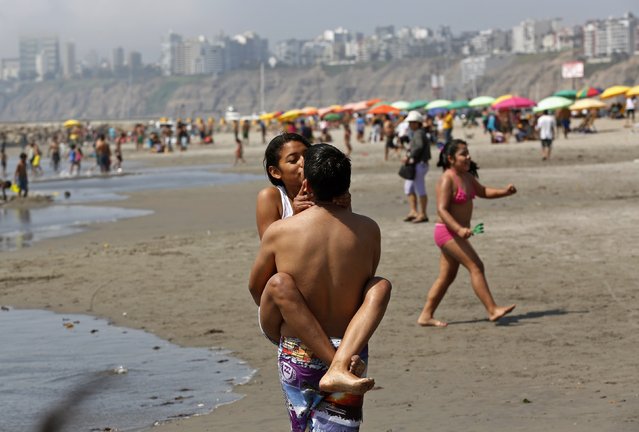 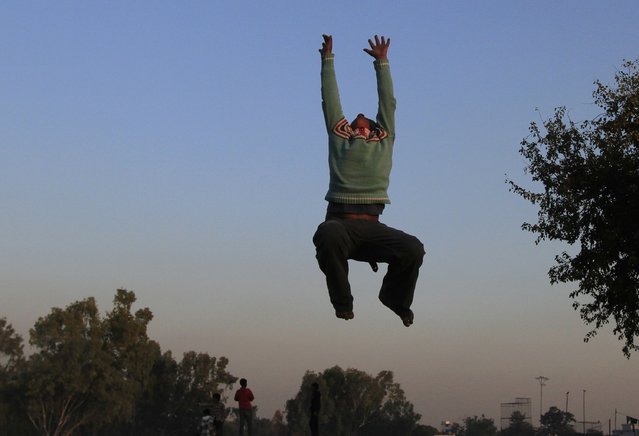 A boy jumps on a trampoline as he plays at a Christian slum in Islamabad December 10, 2014. (Photo by Faisal Mahmood/Reuters) 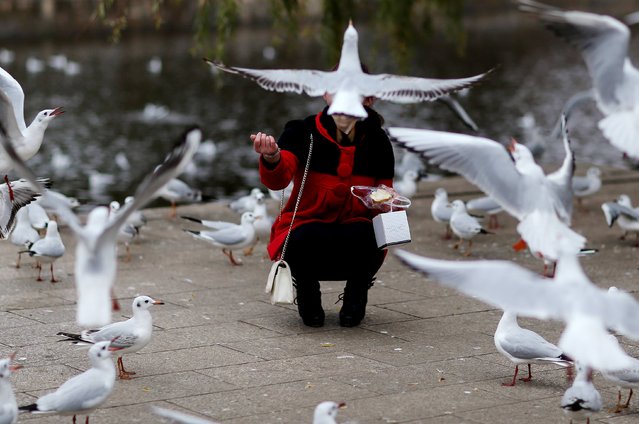 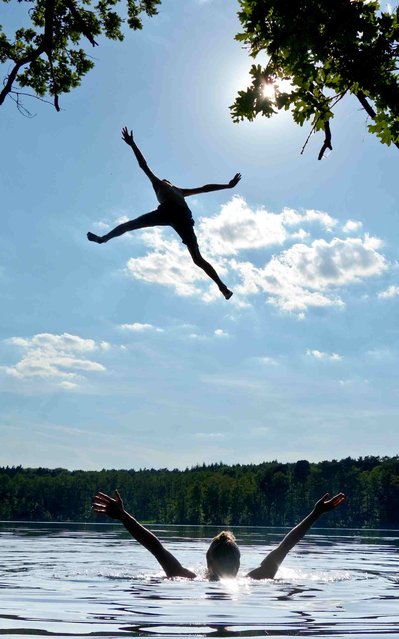 In this picture taken Saturday June 7, 2014, a boy jumps into the water of Lake Treplin near Treplin, eastern Germany. (Photo by Patrick P. Leul/AP Photo/DPA) 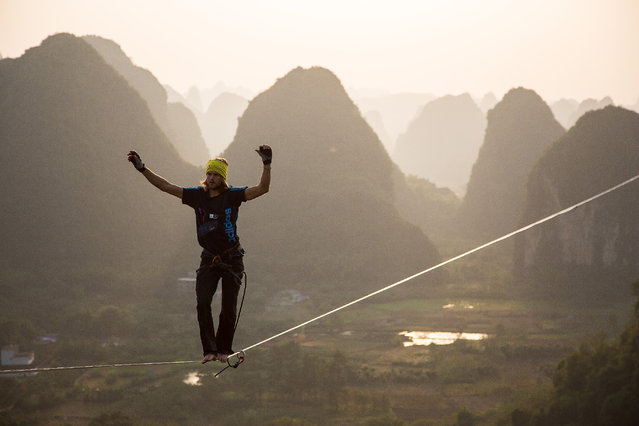 The sun begins to set as Alexander Schulz crosses the line, on November 25, 2014, Yangshuo, China. A daredevil has smashed the world record for longest distance walked on a highline - tiptoeing a massive 375m. The drawn-out line, which was anchored between two limestone boulders at 100m above the ground, beat the previous record by 70 metres. Alexander Schulz, 23, from Germany, spent three days trying to cross the line - falling scores of times - while battling ferocious wind and rain. Alex and his co-workers from One Inch Dreams, a slacklining company, set up the line in Yangshuo, China, where towering rocks covered in jungle foliage inspired the filmmakers of science-fiction epic Avatar. (Photo by One Inch Dreams/Barcroft Media) 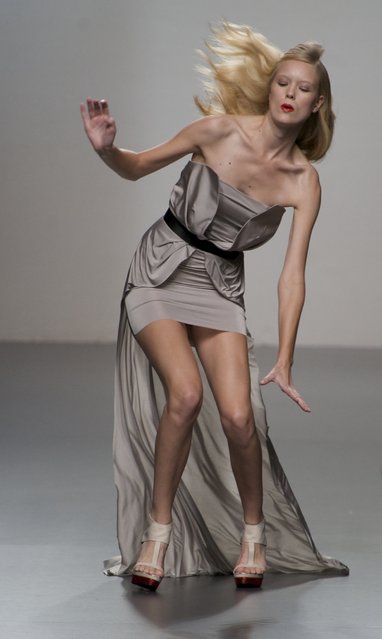 A model stumbles walking the runway in the Amaya Arzuaga fashion show during the Cibeles Madrid Fashion Week Spring/Summer 2012at Ifema on September 18, 2011 in Madrid, Spain. (Photo by Juan Naharro Gimenez/Getty Images) 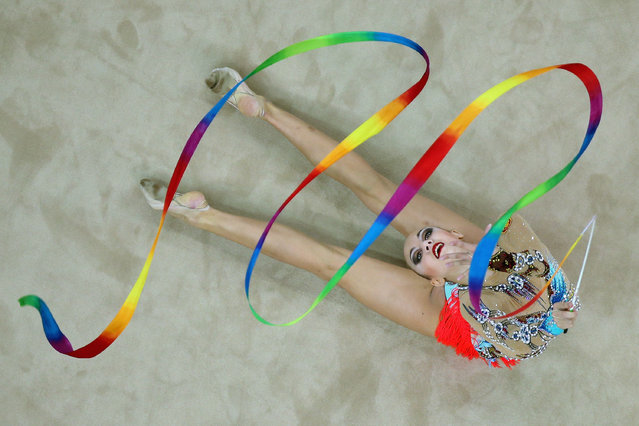 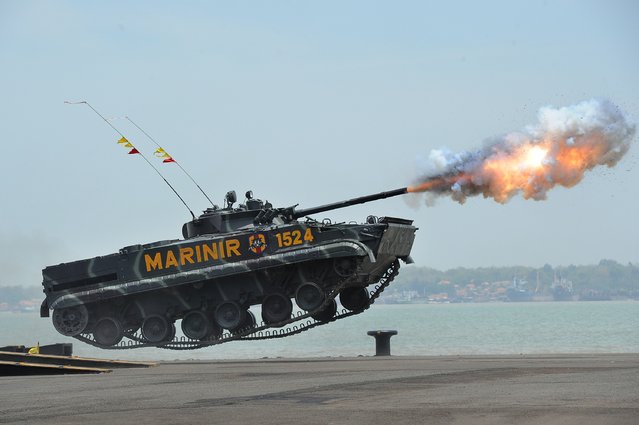 An Indonesian Marine tank jumps and launches missiles during The 69th Republic of Indonesian Military Anniversary on October 7, 2014 in Surabaya, Indonesia. (Photo by Robertus Pudyanto/Getty Images) 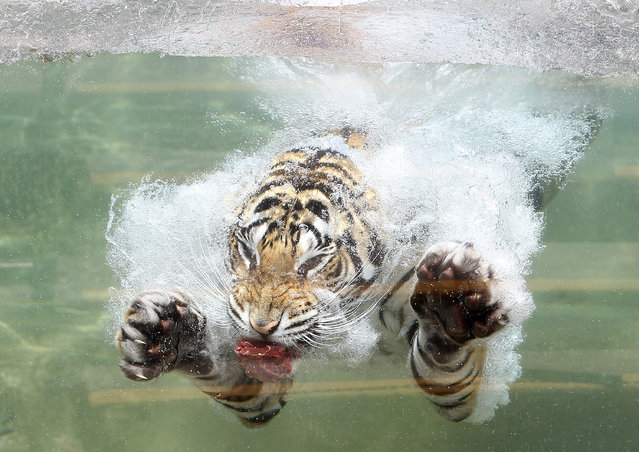 A Bengal Tiger named Akasha dives into the water after a piece of meat at Six Flags Discovery Kingdom on June 20, 2012 in Vallejo, California. (Photo by Justin Sullivan/Getty Images) 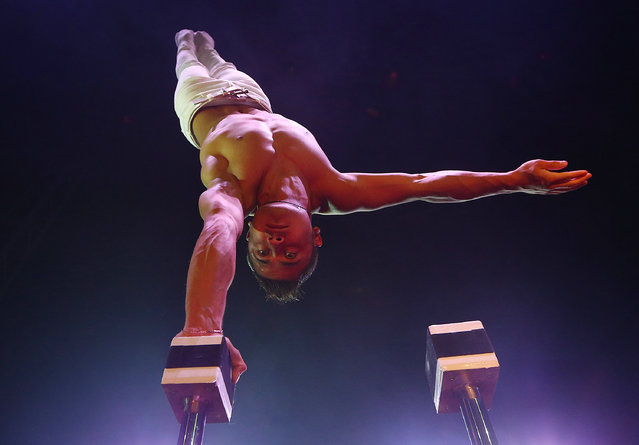 Acrobat Vlad Khvostik performs during a photocall at the Moscow State Circus in Clapham on October 22, 2014 in London, England. (Photo by Carl Court/Getty Images) 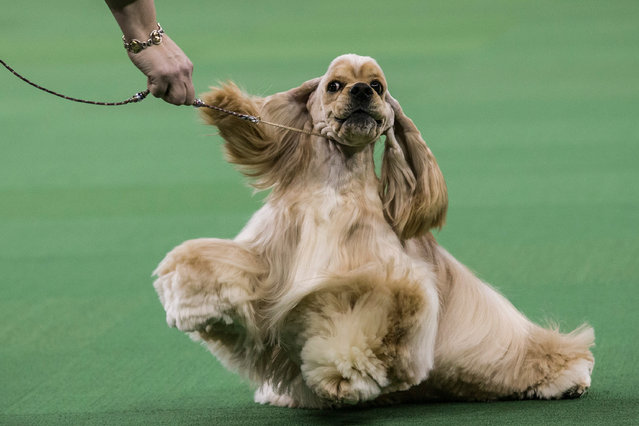 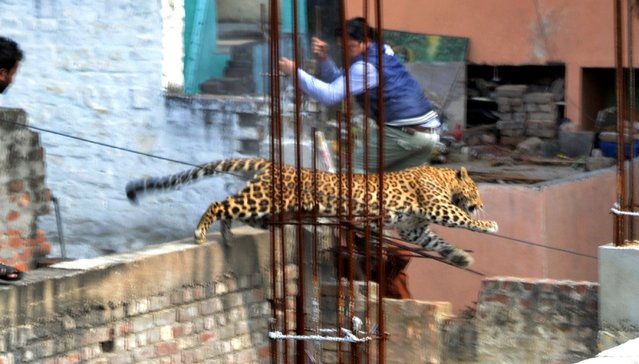 A leopard leaps across an under-construction structure near a furniture market in the Degumpur residential area as a bystander moves out of the way in Meerut on February 23, 2014. A leopard sparked panic in a north Indian city when it strayed inside a hospital, a cinema and an apartment block before evading captors, an official said. (Photo by AFP Photo) 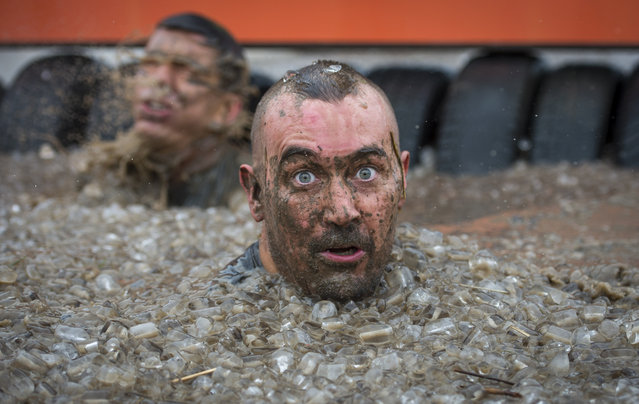 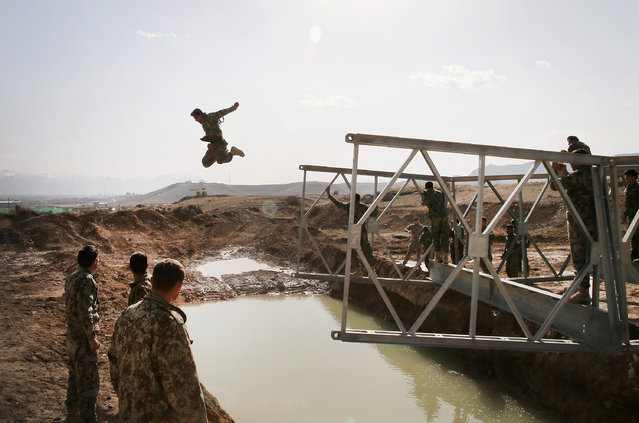 A soldier with the Afghan National Army's (ANA) National Engineer Brigade tries to make dry land after leaping from the top of a Mabey-Johnson portable pre-fabricated bridge which his unit was learning to construct with the help of U.S. Navy Seabees from Naval Mobile Construction Battalion (MCB) 28 at the ANA's combined Fielding Center on March 18, 2014 in Kabul, Afghanistan. (Photo by Scott Olson/Getty Images) 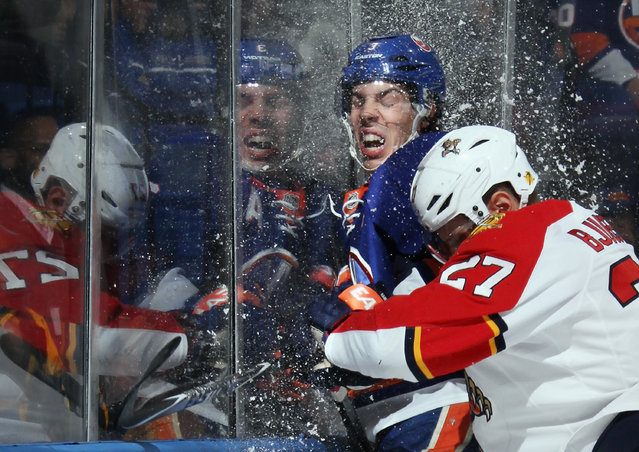 Travis Hamonic #3 of the New York Islanders is hit into the glass by Nick Bjugstad #27 of the Florida Panthers during the first period at the Nassau Veterans Memorial Coliseum on April 1, 2014 in Uniondale, New York. (Photo by Bruce Bennett/Getty Images) 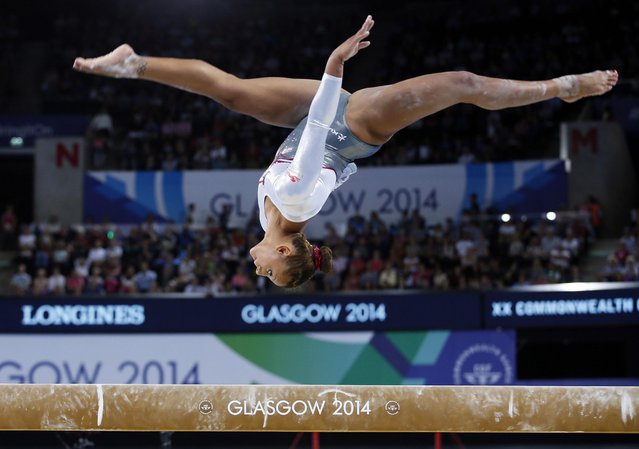 Claudia Fragapane of England leaps during her beam routine as she takes part in the women's team final and individual qualification gymnastic competition at the Commonwealth Games Glasgow 2014, in Glasgow, Scotland, Tuesday, July, 29, 2014. (Photo by Alastair Grant/AP Photo) 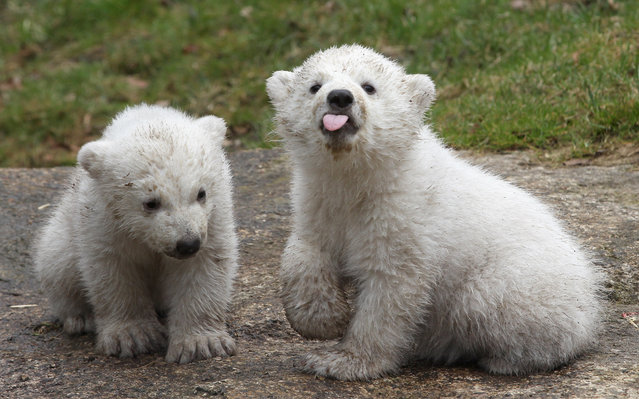 14 week-old twin polar bear cubs play during their first presentation to the media in Hellabrunn zoo on March 19, 2014 in Munich, Germany. (Photo by Alexandra Beier/Getty Images) 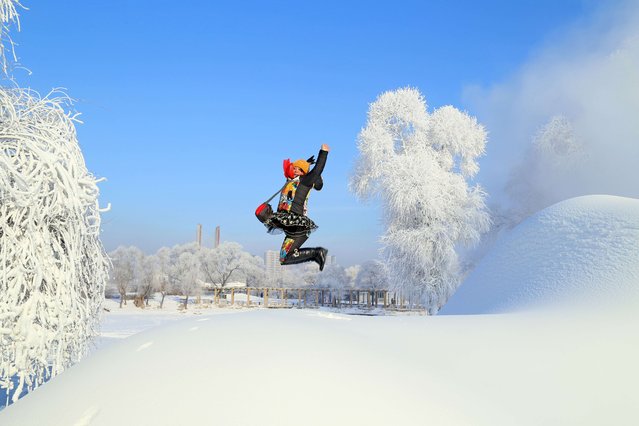 A woman poses for a photo by a snow-covered tree in Jilin, in northeast China's Jilin province on December 9, 2014. (Photo by AFP Photo) 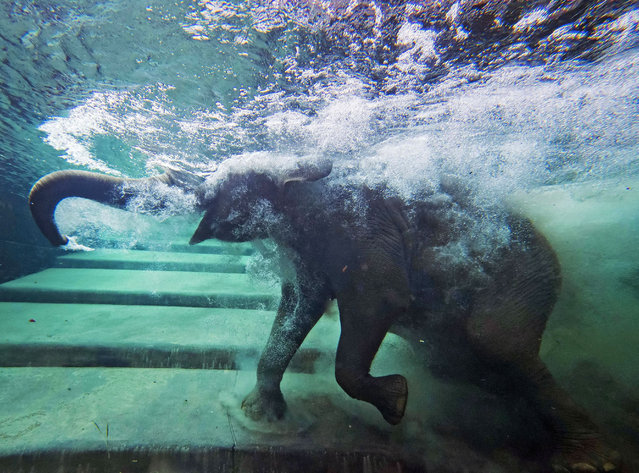 An elephant immerses behind a window in the elephants' indoor pool at the Zoo in Leipzig, Germany, Tuesday, August 5, 2014. (Photo by Jens Meyer/AP Photo) 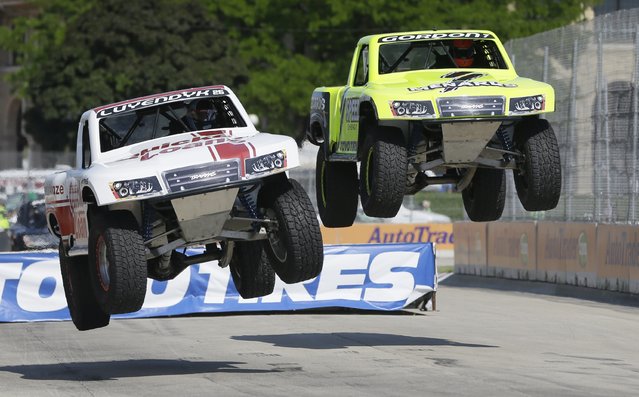 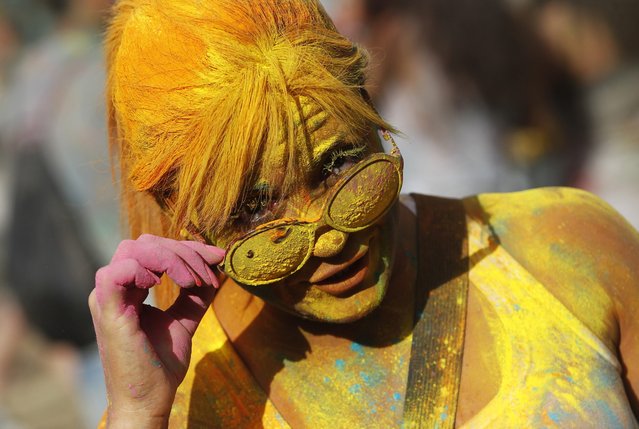 A woman, covered in coloured powder poses, during the Holi Festival of Colors, in Lisbon, Sunday, September 14 2014. The festival is fashioned after the Hindu spring festival Holi, which is mainly celebrated in some regions of India and Nepal. (Photo by Francisco Seco/AP Photo)
Edit Del
17 Dec 2014 12:12:00, post received 0 comments
Publication archive:
←   →
Popular tags:
All tags
Last searches: