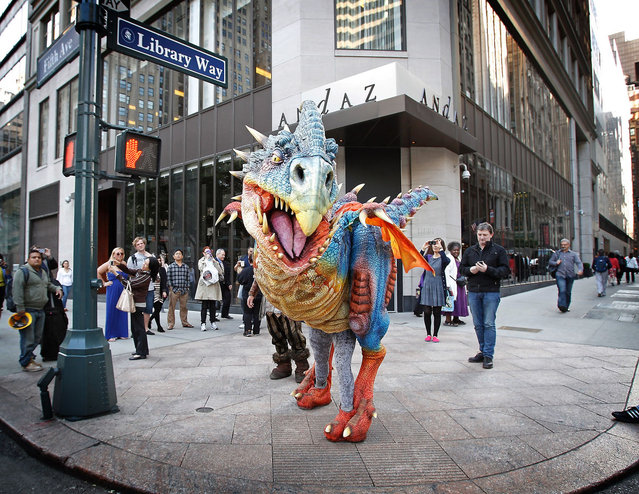 The Baby Nager dragon, from DreamWorks’ new “How to Train Your Dragon” Live Spectacular touring musical, shows off it’s colors outside of the New York Public Library. (Photo by Mark Von Holden) 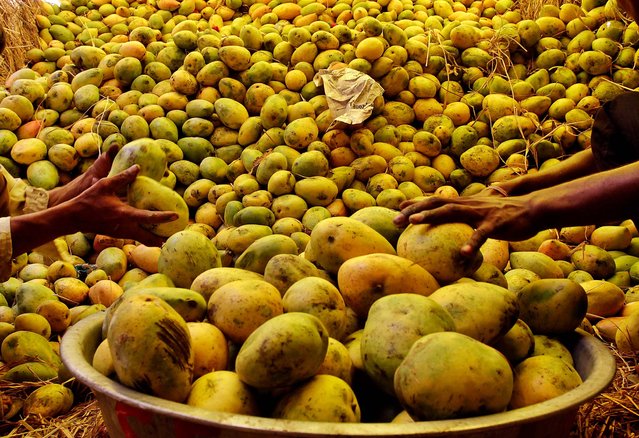 Indian laborers place mangoes in a basket while unloading them from a truck at a fruit market in Ahmadabad, India on May 11, 2012. The mango is the country's national fruit and is the world's largest mango producer with about 13 million tons each year. (Photo by Ajit Solanki/Associated Press) 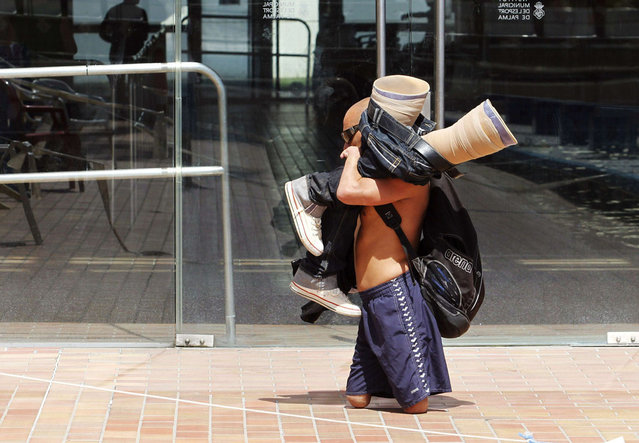 Paralympic swimmer Xavi Torres, 37, of Spain carries his orthopaedic legs after a training session on the Balearic island of Palma de Mallorca. This summer, Torres, who has previously won 16 paralympic medals, will participate in his sixth paralympic games. He currently owns four world swimming records in different categories. (Photo by Enrique Calvo/Reuters) 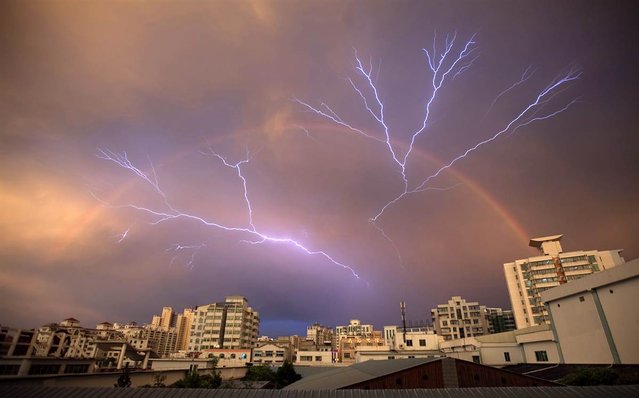 A rainbow is seen in the sky as lightning strikes after a rainstorm in Haikou, Hainan province, China, on May 13, 2012. (Photo by China Daily via Reuters) 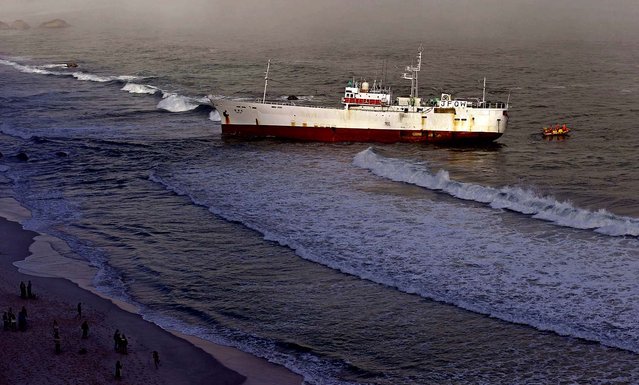 Craig Lambinon, spokesman for the National Sea Rescue Institute, said thick fog may have contributed to the accident at First Beach in Cape Town's upscale Clifton area on May 12, 2012. (Photo by Schalk van Zuydam/Associated Press) 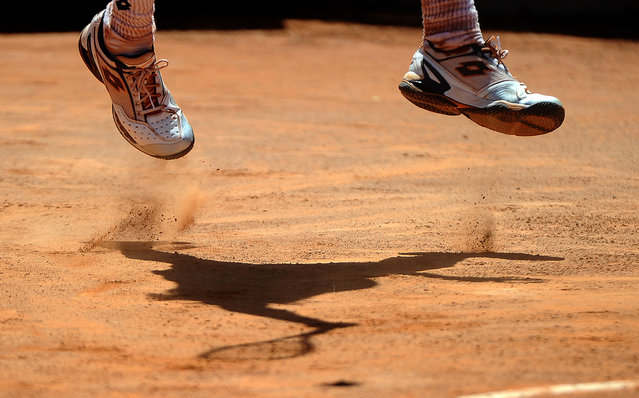 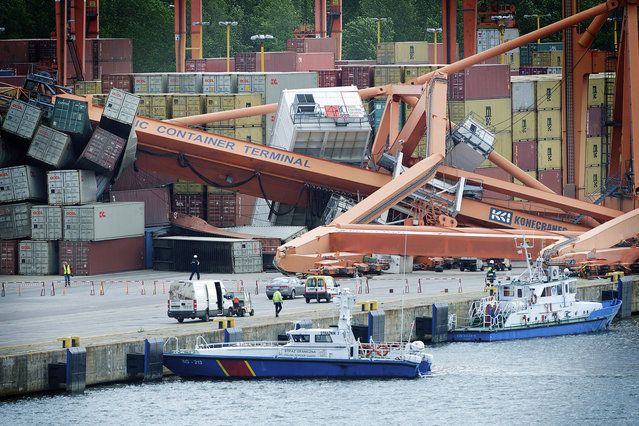 People look on after the gantry of the Baltic Container Terminal fell down onto shipping containers at the waterfront in Gdynia, Poland. Three people were injured in the accident. (Photo by Adam Warzawa) 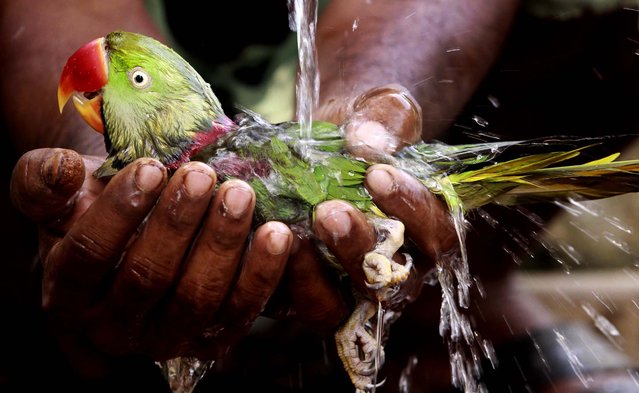 A villager bathes a parrot he rescued by holding it underneath a tap after it fell from a tree on a hot afternoon on the outskirts of Bhubaneswar, India on May 10, 2012. (Photo by Biswaranjan Rout/Associated Press) 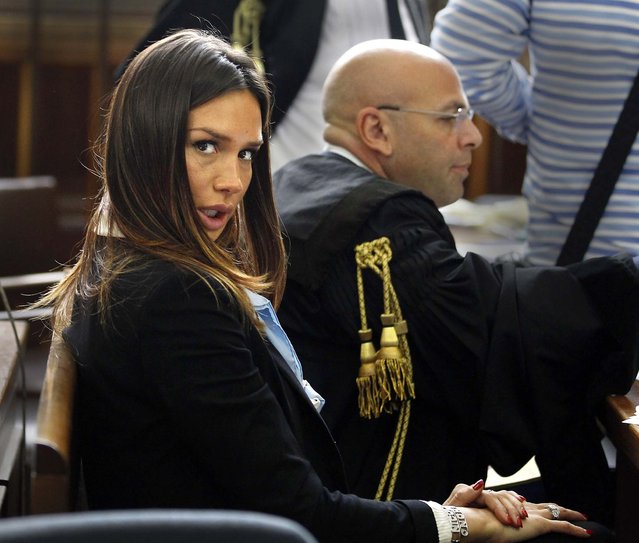 Former showgirl Nicole Minetti looks at the camera during a break in her trial with ex-Italian Premier Silvio Berlusconi aides, Emilio Fede, an executive in Berlusconi's media empire, and talent agent Dario “Lele” Mora, on charges they allegedly recruited an underage Moroccan girl and other women for prostitution at Berlusconi's villas on May 11, 2012. (Photo by Luca Bruno/Associated Press) 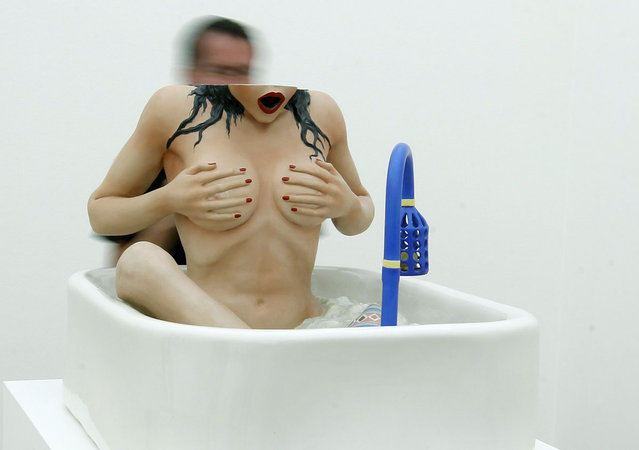 A man stands behind the sculpture “Woman in Tub” from 1988 by U.S.artist Jeff Koons during a media preview at the Fondation Beyeler in the Swiss town of Riehen near Basel. The exhibition “Jeff Koons” is opened to the public from may 13 to September 2. (Photo by Arnd Wiegmann/Reuters) 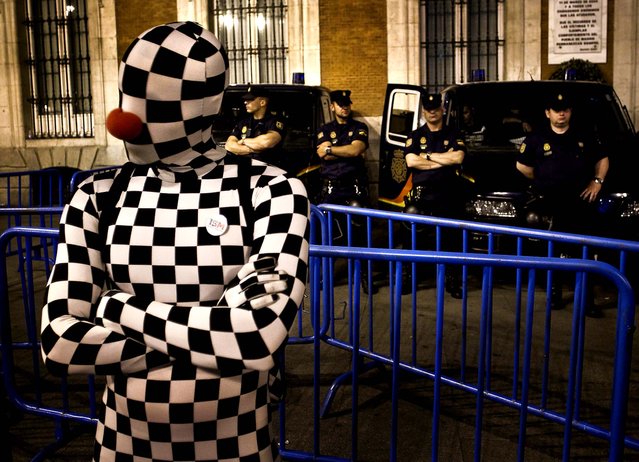 A demonstrator dressed in a chess board costume performs next to police officers during a protest at Puerta del Sol plaza in Madrid. Spaniards angered by increasingly grim economic prospects and unemployment hitting one out of every four citizens protested in droves in the nation's largest cities, marking the one-year anniversary of a spontaneous movement that inspired similar anti-authority demonstrations across the world on May 12, 2012. (Photo by Alberto Di Lolli/Associated Press) 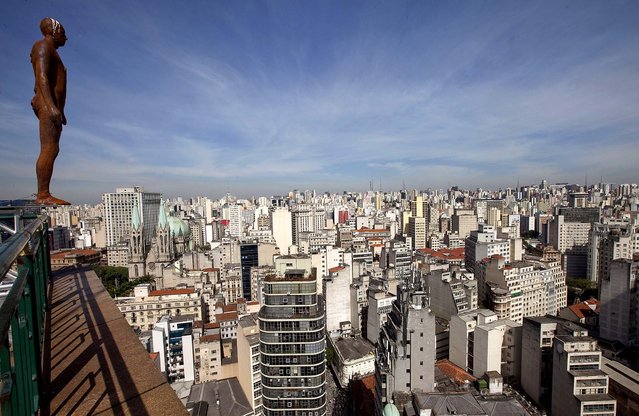 A sculpture by British artist Antony Gormley is displayed on the edge of a building in downtown Sao Paulo on May 11, 2012. Brazilian media are calling Gormley's sculptures “suicide statues”. Firefighters have been called to the scene this week by concerned citizens who mistook Gormley's life-size body cast sculptures perched on the edges of tall buildings as despondent people ready to jump. (Photo by Andre Penner/Associated Press) 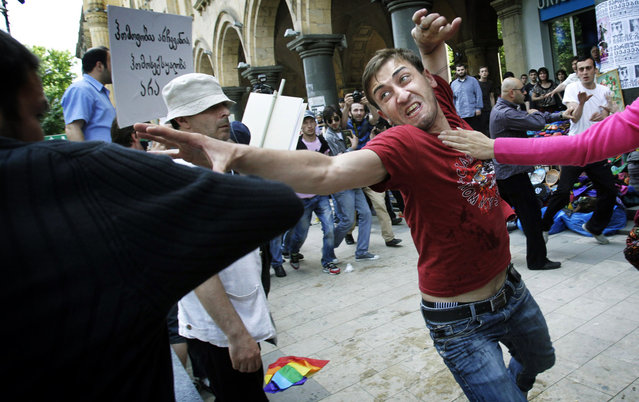 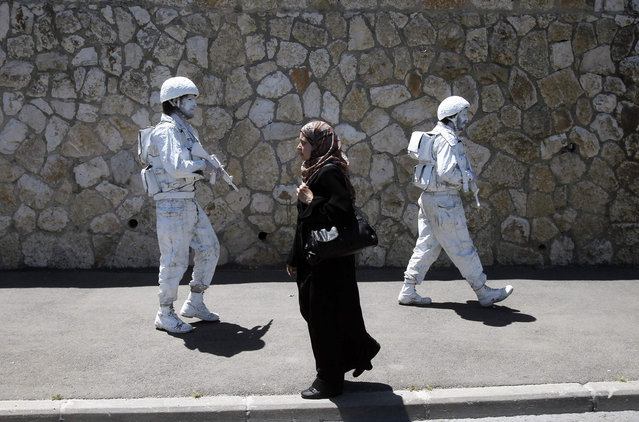 A woman walks past Israeli artists, one of them Yuda Braun (R), in Jerusalem. Braun says the “White Soldier”, his artistic project launched in 2009, hopes to add to the discourse on the Israeli-Palestinian conflict. (Photo by Baz Ratner/Reuters) 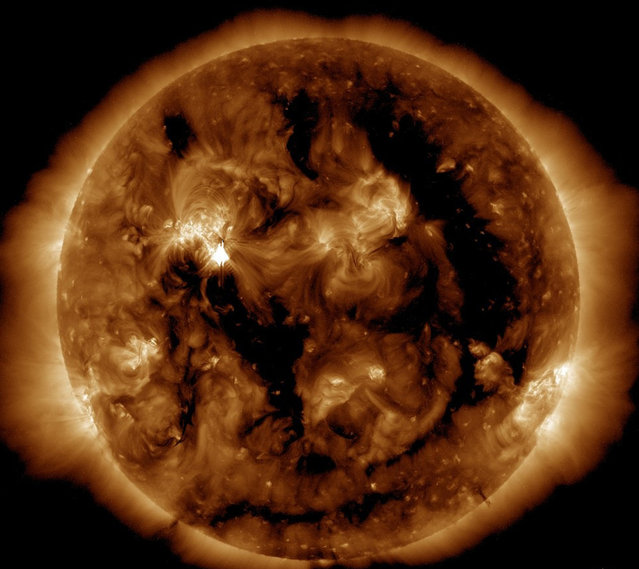 This May 9, 2012 image of the Sun provided by the Solar Dynamic Observatory’s Atomospheric Imaging Assembly (SDO/AIA)shows activity at the huge sunspot complex, known as AR 1476(Upper-L), that rotated into Earth’s view over the weekend. It measures more than 60,000 miles (100,000 kilometers) across. The sunspot is crackling with M-class solar flares and appears to be on the verge of producing even stronger blasts. The sunspot’s “beta-gamma-delta” magnetic field harbors energy for X-class flares, the most powerful kind. Eruptions in the days ahead will likely be geoeffective as the sunspot turns to face Earth. (Photo by AFP) 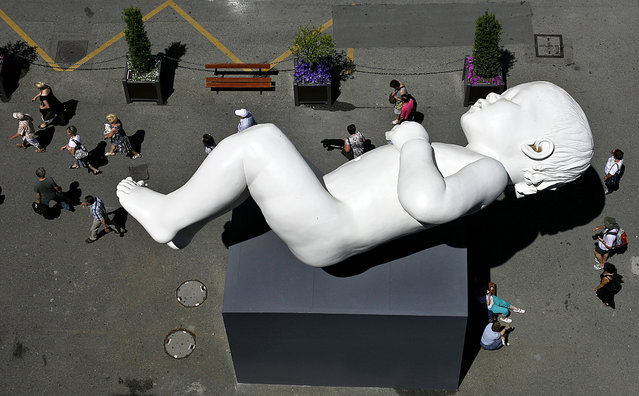 British artist Marc Quinn's work “Planet”, is seen at the exhibition “The Littoral Zone” at the Oceanographic museum of Monaco on May 11, 2012. (Photo by Lionel Cironneau/Associated Press) 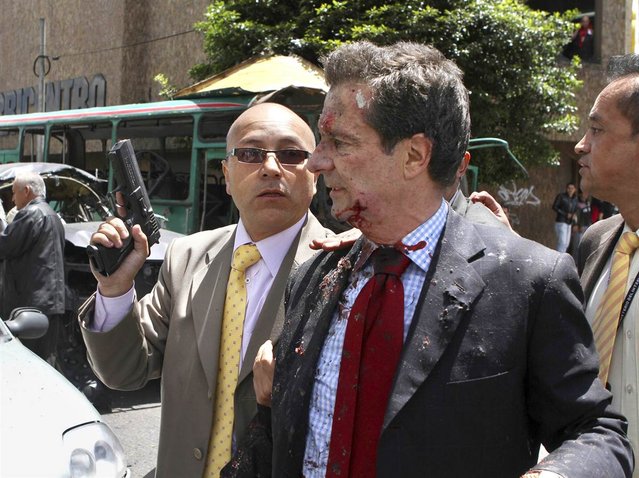 Former Colombian Interior Minister Fernando Londono is accompanied by a bodyguard after being injured in an explosion in a central avenue in Bogota on May 15, 2012. Londono was the intended tagret of a bomb attack in a commercial district of Colombia's capital that killed two people, President Juan Manuel Santos said. (Photo by Fredy Builes/Reuters) 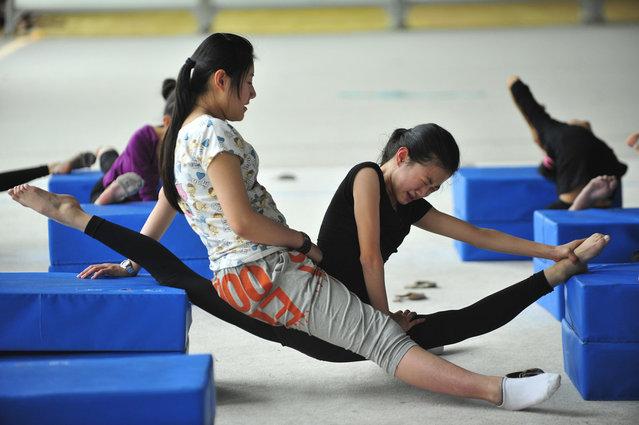 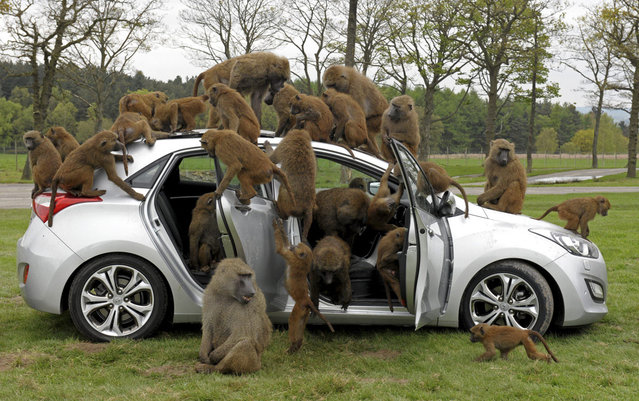 Baboons climb on a Hyundai i30 hatchback at Knowsley Safari Park during a promotional event by the manufacturer to test the car’s durability, in Preston, Merseyside May 1, 2012. (Photo by M&C Saatchi/Reuters) 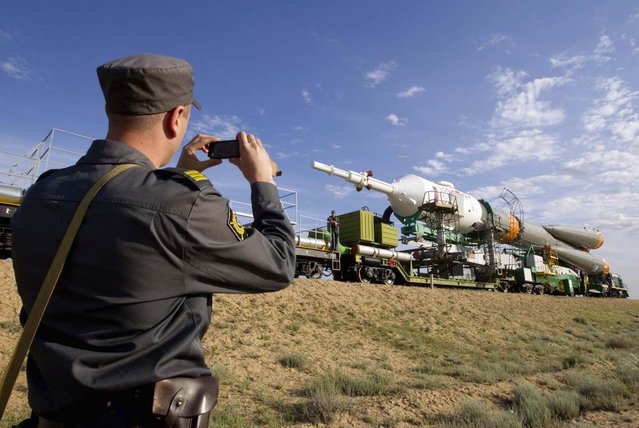 A policeman takes a picture of the Soyuz TMA-04M spacecraft during transportation to its launch pad at the Baikonur cosmodrome May 13, 2012. The International Space Station (ISS) crew of U.S. astronaut Joseph Acaba and Russian cosmonauts Gennady Padalka and Sergei Revin is due to travel on the spacecraft on May 15. (Photo by Shamil Zhumatov/Reuters) 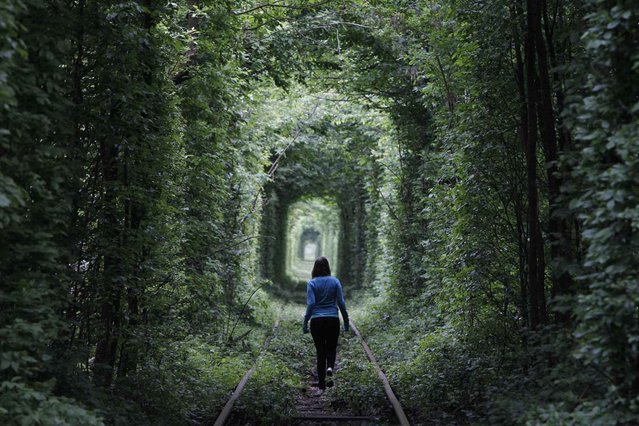 A girl walks on a disused railway track, through what is known locally as the “Tunnel of Love”, in small town Kleven some 350 km (217 miles) off western Kiev May 13, 2012. (Photo by Gleb Granich/Reuters) 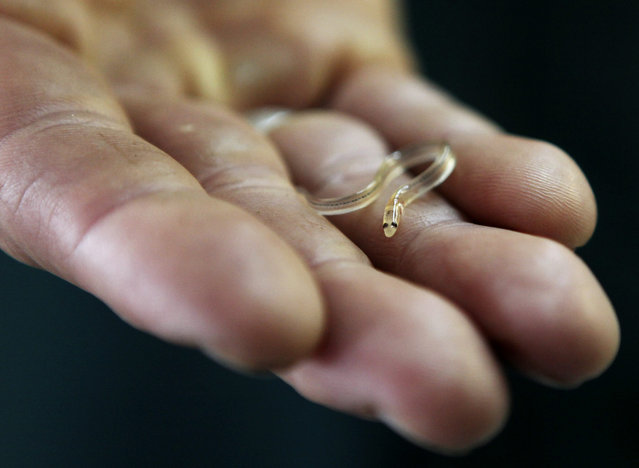 Paul Firminger holds an elver in his hand at South Shore Trading Co., an elver buying station, in Portland, Maine. May 31 marks the end of what has become a Gold Rush for a small group of Maine fishermen – the 10-week season for catching juvenile eels known as elvers, whose price has increased nearly a hundred-fold over the past decade. (Photo by Joel Page/Reuters) 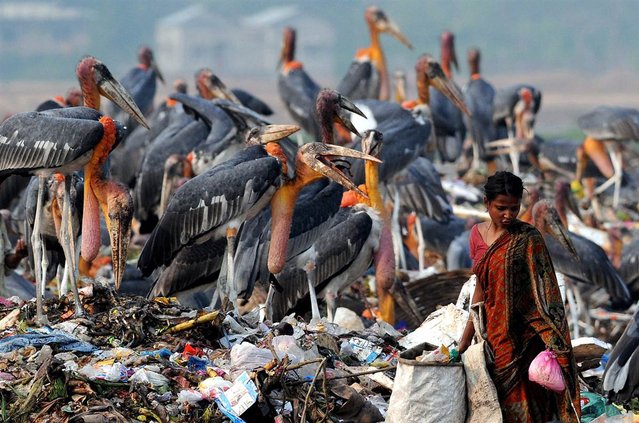 An Indian rag picker searches for material next to a group of greater adjutant storks at a rubbish dump near Deepor Beel Wildlife Sanctuary on the outskirts of Guwahati city, India, May 10, 2012. Fast-vanishing wetlands in and around Guwahati city are threatening the survival of the species. Guwahati city has the largest concentration of greater adjutant storks in the world, but their numbers are gradually declining due to the loss of wetlands, habitat and declining availability of food. (Photo by EPA)
Edit Del
19 May 2012 13:05:00, post received 0 comments
Publication archive:
←   →
Popular tags:
All tags
Last searches: