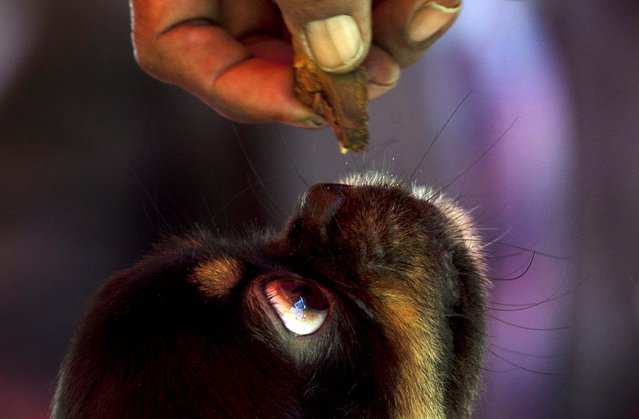 A dog is offered food before competing in the Fall Canine Expo in Havana, Cuba, on November 22, 2012. (Photo by Ramon Espinosa/AP) 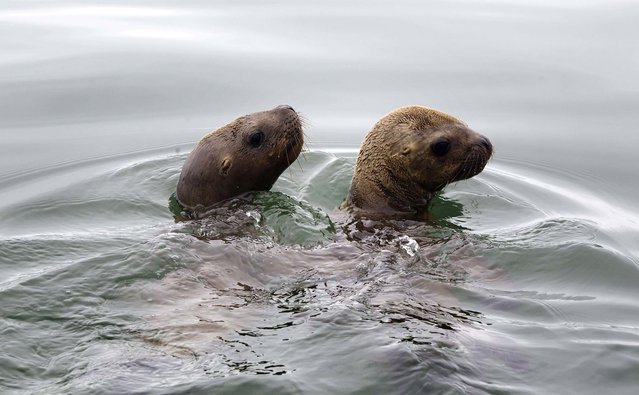 One-year old sea lions named Alex and Camilo swim in the ocean after being released into the wild in Lima, Peru, December 6, 2012. The sea lions were rehabilitated by Peru's Organization for Research and Conservation of Aquatic Animals after being found injured one month ago on a Lima beach. (Photo by Martin Mejia/Associated Press) 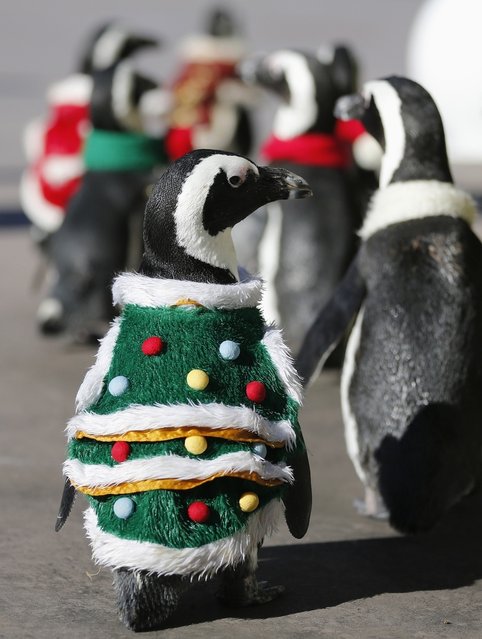 Penguins wearing Christmas-themed outfits waddle around during a holiday event at Hakkeijima Sea Paradise in Tokyo on November 27, 2012. (Photo by Yuriko Nakao/Reuters) 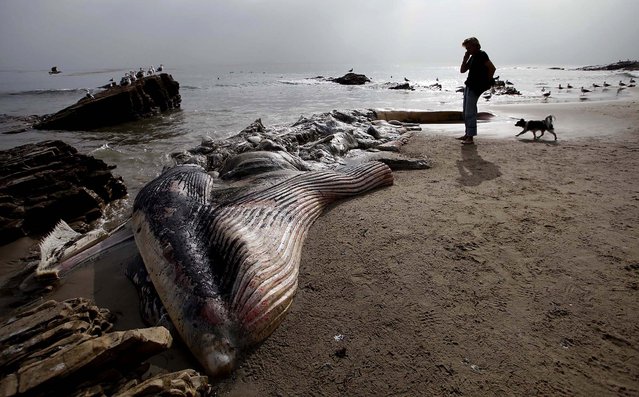 A woman walks her dog past a dead young male fin whale that washed up Monday between the Paradise Cove and Point Dume areas of Malibu, California, December 6, 2012. The rotting carcass near celebrity homes is causing a gigantic cleanup problem as authorities try to decide who's responsible for getting rid of it. (Photo by Nick Ut/Associated Press) 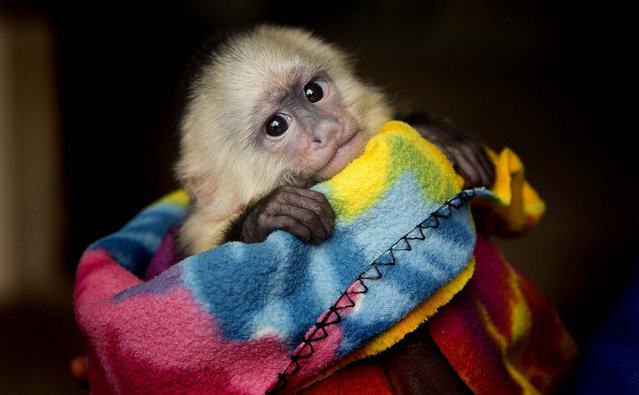 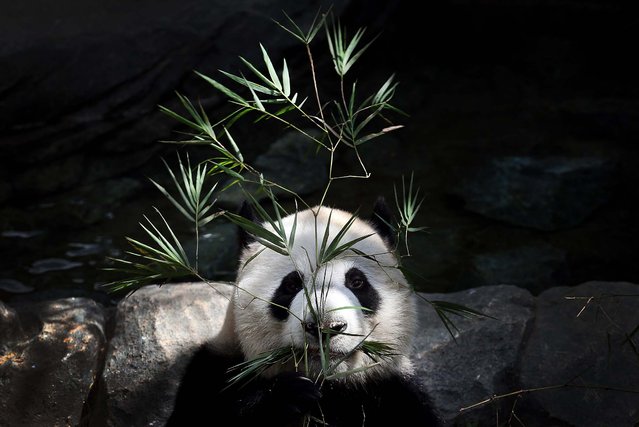 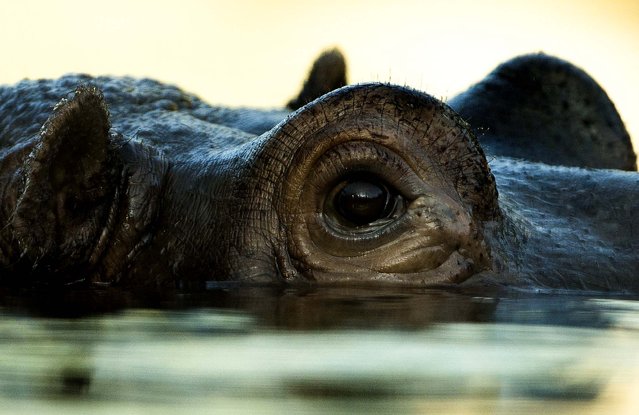 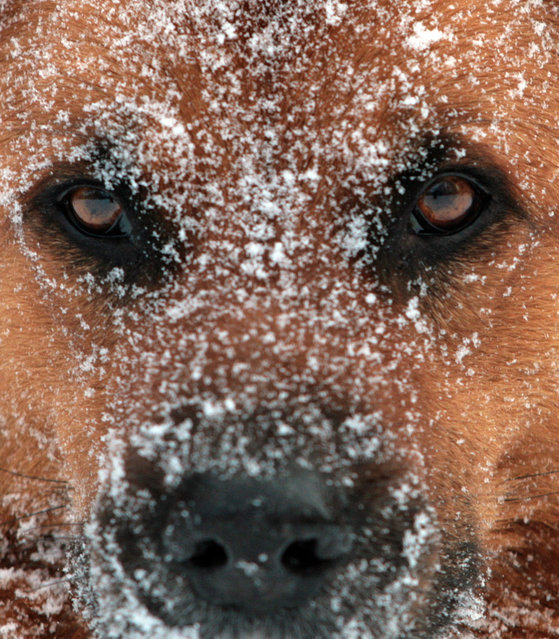 A dog has his face covered in snowflakes in Auetal, western Germany, December 12, 2012. Meteorologists forecast ongoing winter weather for the following days in the region. (Photo by Ole Spata) 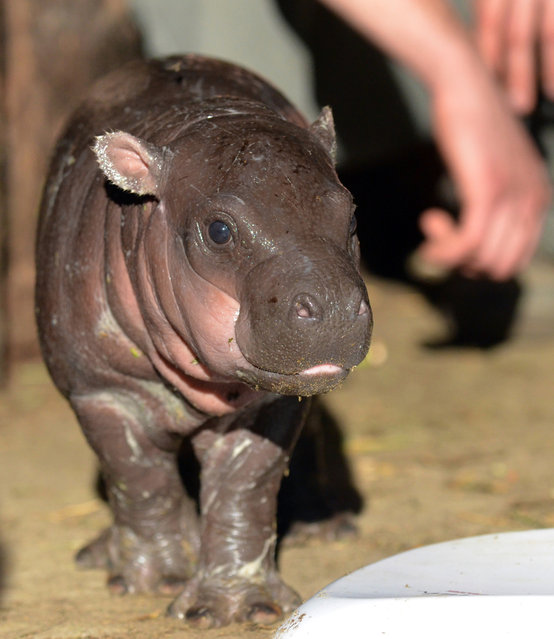 A new born hippo baby walks in front of its Zoo keeper in Szeged Zoo, near Budapest, Hungary on December 7, 2012 during his first press presentation. The small animal was born three weeks ago, on November 17, 2012 with 5925 grams. (Photo by Csaba Segesvari/AFP Photo) 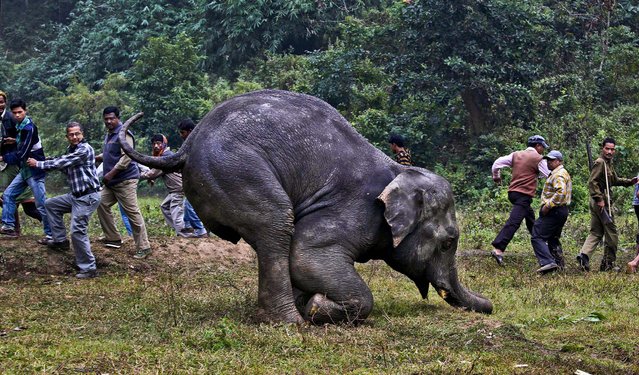 A crowd gathers to watch an injured wild elephant struggle to stand December 10, 2012. The animal was attacked by poachers last week in the Pancharatna hills in Assam, India. Poachers cut off the elephant's two tusks and tail, but the elephant is expected to survive according to local animal officials. (Photo by Anupam Nath/Associated Press) 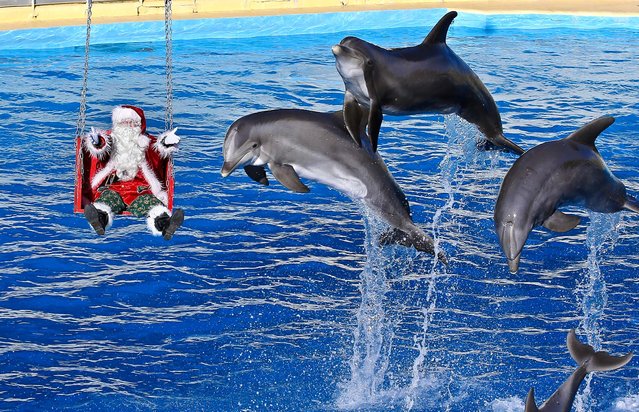 A man dressed in a Santa Claus costume poses for photographers with dolphins, at the animal exhibition park Marineland in Antibes, southern France, Tuesday, December 11, 2012. (Photo by Lionel Cironneau/AP Photo) 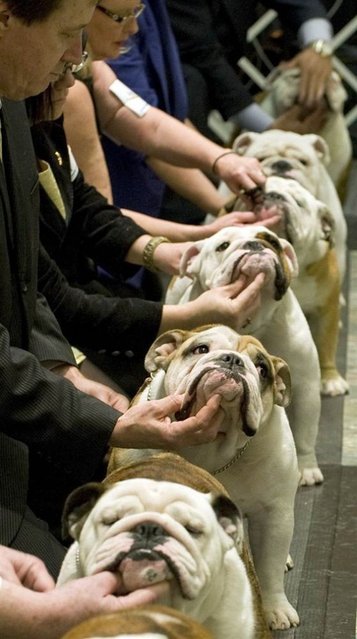 A line of male bulldogs are judged at the Bulldog Club of America's 118th National Speciality Show in Costa Mesa, Calif., on November 24, 2012. (Photo by Mindy Schauer/Zuma Press) 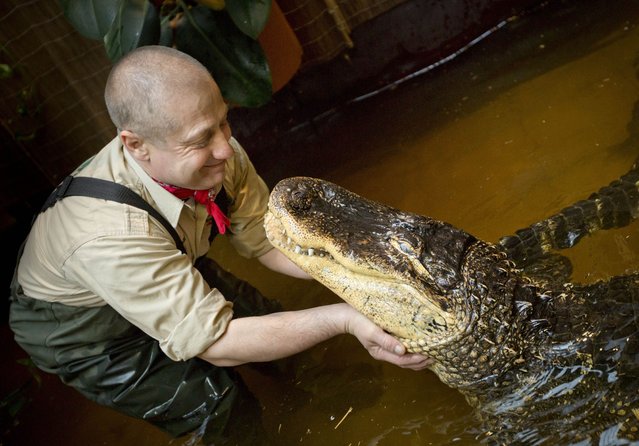 Orazio Martino poses with his 23-year-old Mississippi alligator Blacky in his private a basin on December 4, 2012 at his house in Dietzenbach, center Germany. With his private zoo and its exotic shows, the former pizza chef is known throughout Germany. (Photo by Frank Rumpenhorst/AFP Photo) 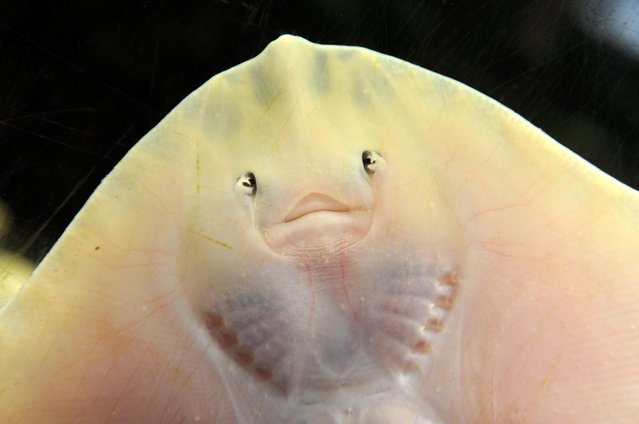 A young ray swims on December 3, 2012 in an aquarium Aquarium of the Wadden Sea National Park in Toenning, northern Germany. (Photo by Carsten Rehder/AFP Photo) 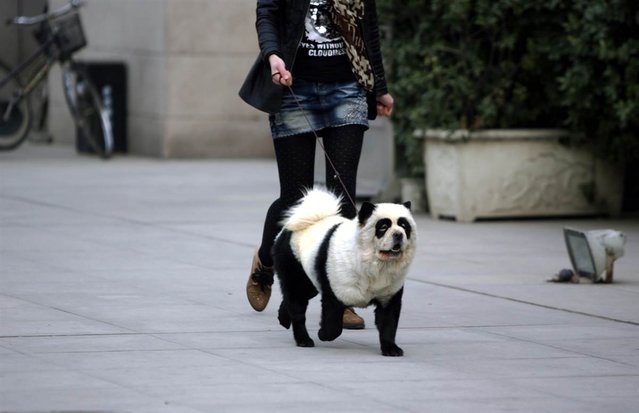 A dog dyed to look like a panda walks on a street in China on November 24, 2012. (Photo by Chinafotopress via Zuma Press) 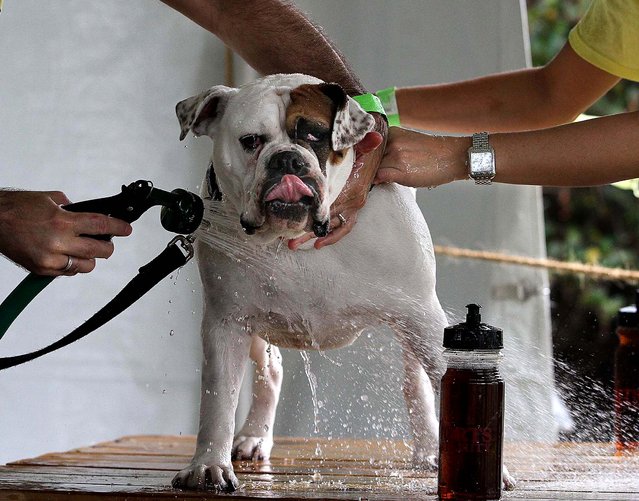 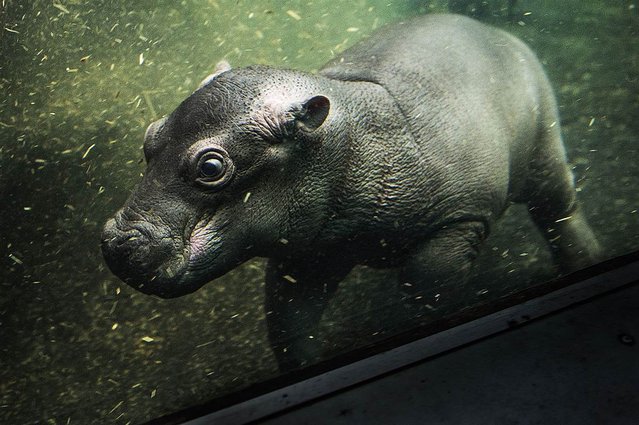 A female hippo infant swims around at the Copenhagen Zoo in Copenhagen, Denmark, on November 22, 2012. (Photo by Jesper Mortensen/Zuma Press) 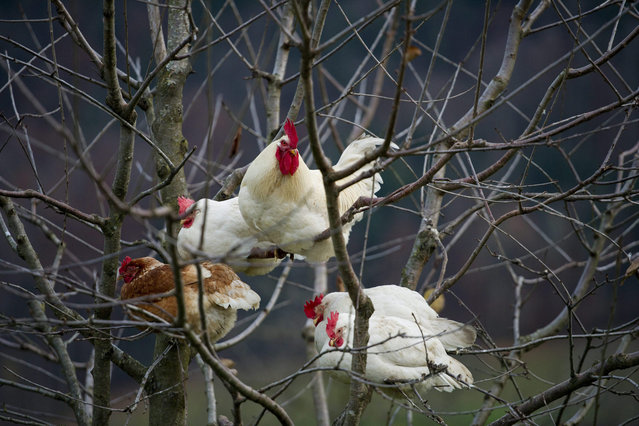 A picture made available on 26 November 2012 shows chickens siting in a cherry tree at a farm in Ibach, Switzerland, 25 November 2012. (Photo by Sigi Tischler/EPA) 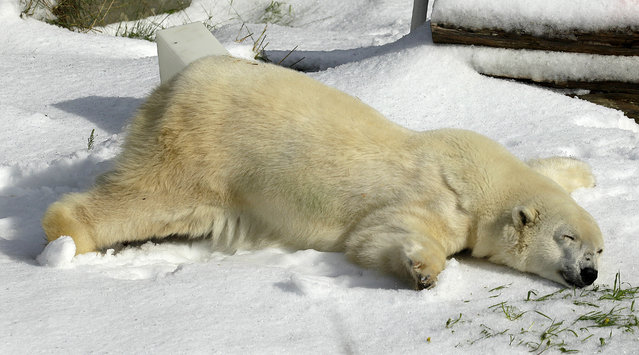 Pike, a 30-year old female polar bear, rolls around in snow that was brought in to celebrate her birthday and the holiday season at the San Francisco Zoo in San Francisco, Thursday, November 15, 2012. (Photo by Jeff Chiu/AP) 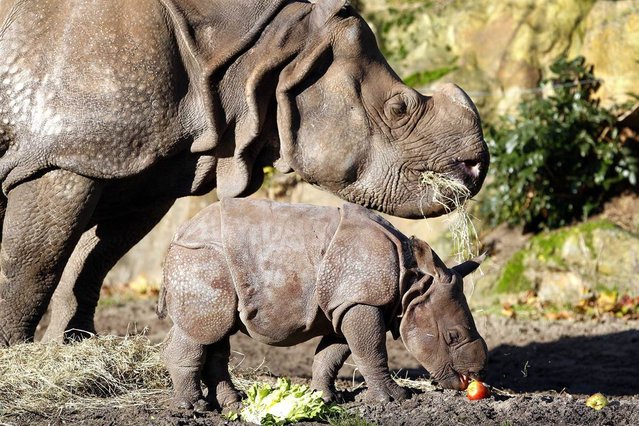 Rhinoceros baby Zwatra walks outside for the first time with her mother Namaste at the Rotterdam Zoo in the Netherlands, on November 28. The baby was born on November 3, 2012. (Photo by Bas Czerwinski/EPA) 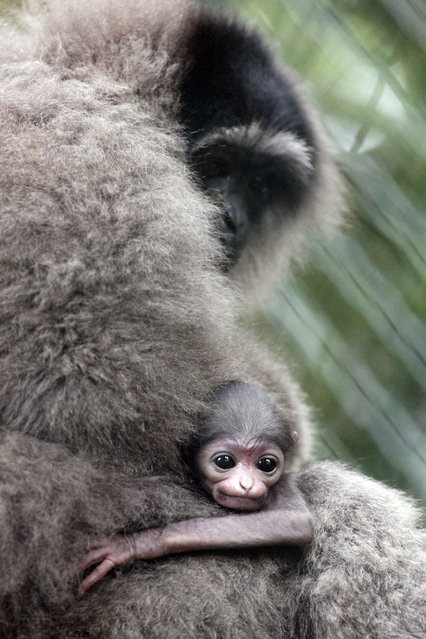 A two week old baby Owa Jawa monkey (Hylobates moloch) clings onto its mother at their cage in Bali Zoo in Gianyar, Bali, Indonesia, 03 December 2012. Illegal poaching and dwindling habitat has caused the population of Owa Jawa monkeys to fall drastically. The species can only be found in certain areas of West Java, Indonesia. (Photo by Made Nagi/EPA) A rabbit jumps over hurdles at the 27th EE-European Show in Leipzig, eastern Germany, on December 7. Small animal breeders from all over the world presented an overall 95,000 animals at the event, among them bantams, chickens, pigeons and rabbits. (Photo by Jan Woitas/AFP Photo) 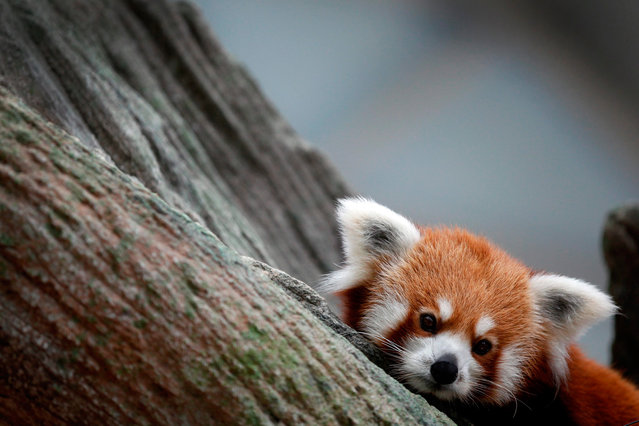 A red panda is seen in its enclosure during the grand opening of the Giant Panda Forest at the Singapore Zoo in Singapore, 28 November 2012. The Giant Panda Forest is a 1,500 square-m (16,146sqft) biodome designed and landscaped to simulate the giant pandas' natural habitat in the rugged highlands of China. (Photo by Stephen Morrison/EPA) 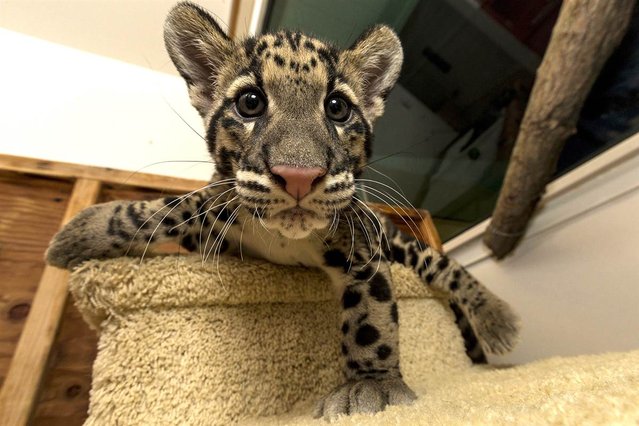 Riki-san, a 14-week-old clouded leopard, is pictured in this handout photo from the San Diego Zoo, taken on Dec. 6. The male cub and his brother (not pictured) arrived earlier this week from the Nashville Zoo, where a very successful breeding program has helped to increase the population of this critically endangered species. (Photo by Handout/Reuters) 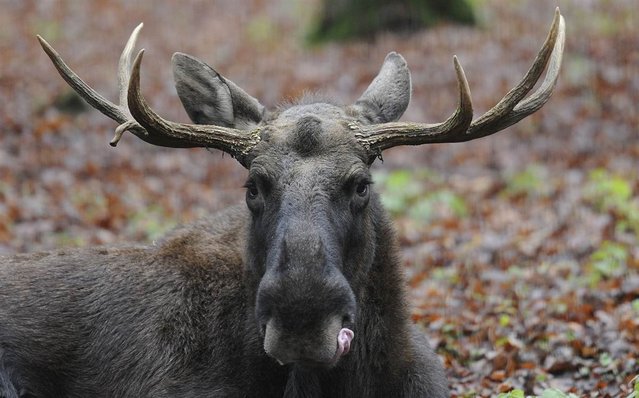 A moose licks its lips at “Schwarze Berge” animal park in Rosengarten, Germany, on December 4, 2012. (Photo by Axel Heimken/AFP Photo) 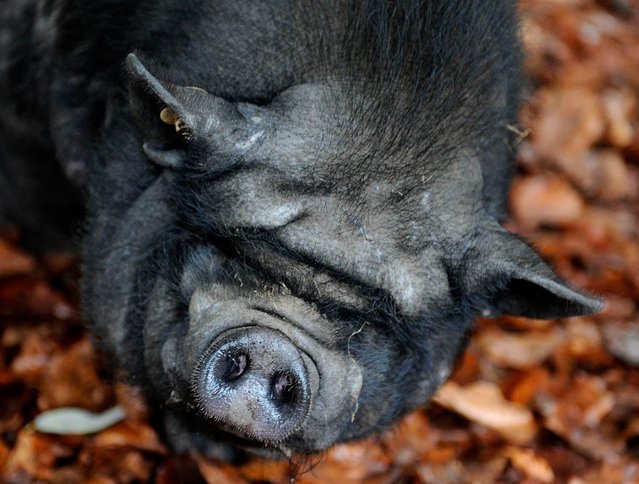 A pot-bellied pig looks into the camera at “Schwarze Berge” animal park, in Rosengarten, Germany, on December 4, 2012. (Photo by Axel Heimken/AFP Photo) 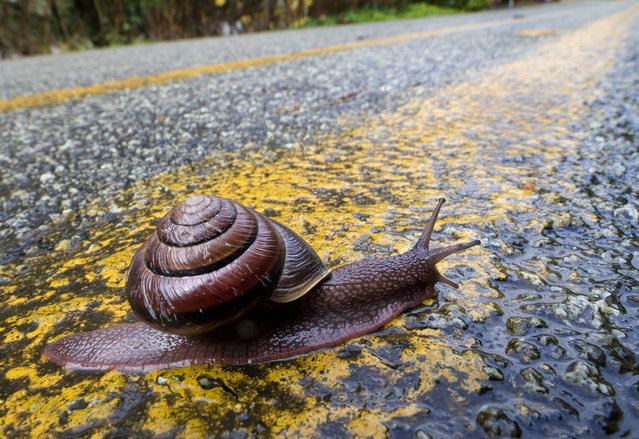 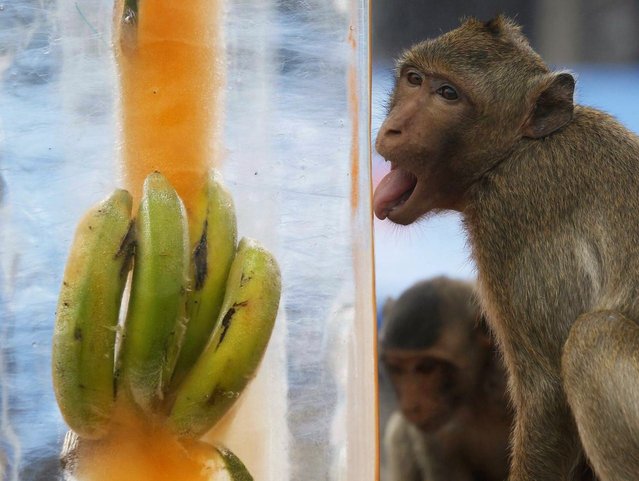 A monkey licks a block of ice with frozen fruit inside during the annual Monkey Buffet Festival, in front of the Phra Prang Sam Yot temple in Bangkok, Thailand, on November 25, 2012. (Photo by Chaiwat Subprasom/Reuters) 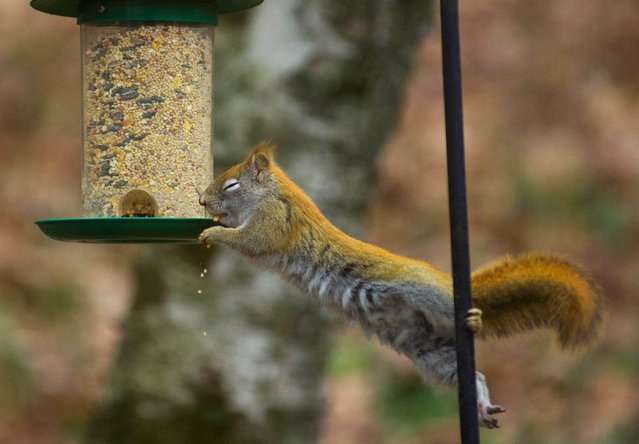 A red squirrel reaches for a birdfeeder hung from a wire to get the seeds December 1, 2012 in Hudson, Wisconsin. The battle goes on year round as bird lovers try various techniques to keep the squirrels from robbing the feeders and scaring the birds away. (Photo by Karen Bleier/AFP Photo)
Edit Del
13 Dec 2012 10:58:00, post received 0 comments
Publication archive:
←   →
Popular tags:
All tags
Last searches: