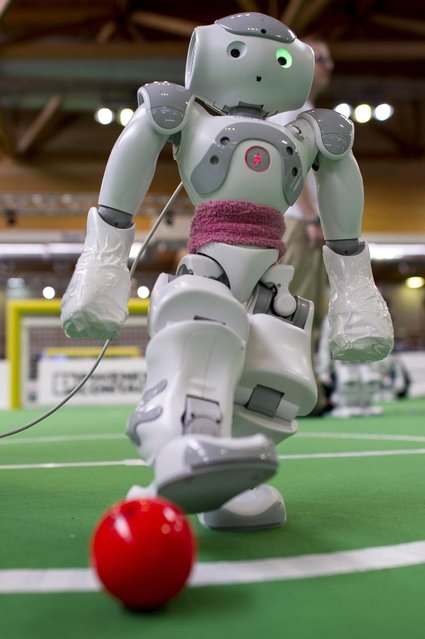 A robot in the play field at the 2013 RoboCup German Open tournament on April 26, 2013 in Magdeburg, Germany. The robots, which are a model called Nao, manufactured by Aldebaran Robotics, perform autonomously and communicate with one another via WLAN. The three-day tournament is hosting 43 international teams and 158 German junior teams that compete in a variety of disciplines, including soccer, rescue and dance. (Photo by Jens Schlueter/Getty Images) 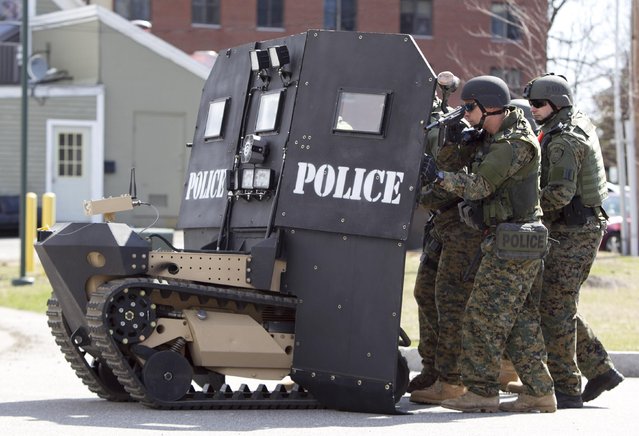 A SWAT robot, a remote-controlled small tank-like vehicle with a shield for officers, is demonstrated for the media in Sanford, Maine, on, April 18, 2013. Howe & Howe Technologies, a Waterboro, Maine company, says their device keeps SWAT teams and other first responders safe in standoffs and while confronting armed suspects. (Photo by Robert F. Bukaty/AP Photo) 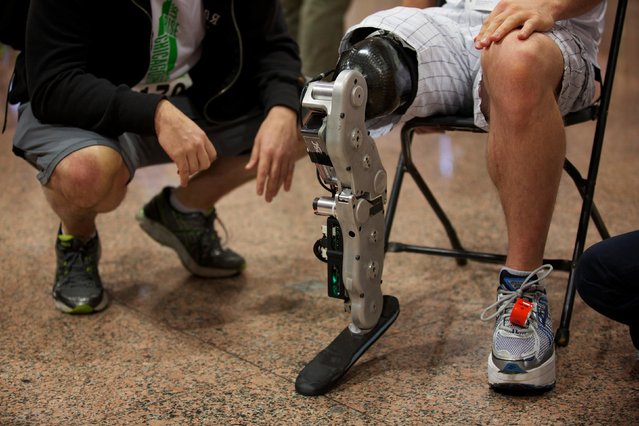 Zac Vawter, a 31-year-old software engineer from Seattle, Washington, prepares to climb to the 103rd story of the Willis Tower using the world's first neural-controlled Bionic leg in Chicago, on November 4, 2012. According to the Rehabilitation Institute of Chicago, their Center for Bionic Medicine has worked to develop technology that allows amputees like Vawter to better control prosthetics with their own thoughts. (Photo by John Gress/Reuters) 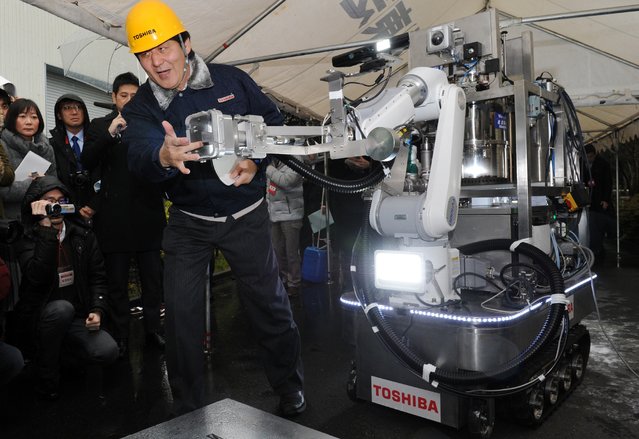 An engineer of Toshiba displays a decontamination robot, for work inside a nuclear plant, during a demonstration at Toshiba's technical center in Yokohama, suburban Tokyo on February 15, 2013. The crawler robot blasts dry ice particles against contaminated floors or walls and will be used for the decontamination in TEPCO's stricken Fukushima nuclear power plant. (Photo by Yoshikazu Tsuno/AFP Photo) 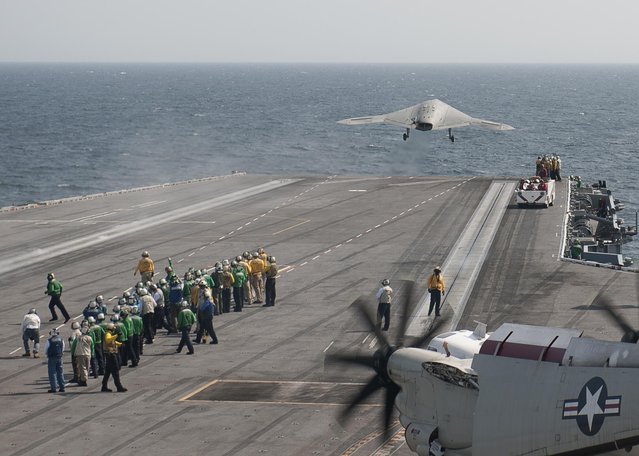 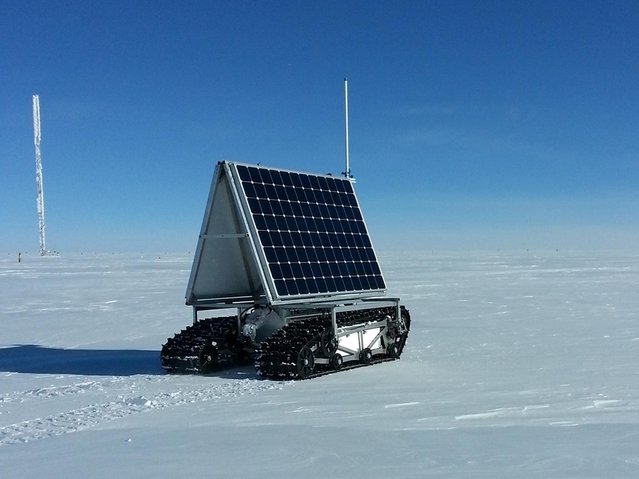 NASA's new Earth-bound rover, GROVER, which stands for both Greenland Rover and Goddard Remotely Operated Vehicle for Exploration and Research, in Summit Camp, the highest spot in Greenland, on May 10, 2013. GROVER is an autonomous, solar-operated robot that carries a ground-penetrating radar to examine the layers of Greenland's ice sheet. Its findings will help scientists understand how the massive ice sheet gains and loses ice. After loading and testing the rover's radar and fixing a minor communications glitch, the team began the robot's tests on the ice on May 8, defying winds of up to 23 mph (37 kph) and temperatures as low as minus 22 F (minus 30 C). (Photo by Lora Koenig/NASA Goddard) 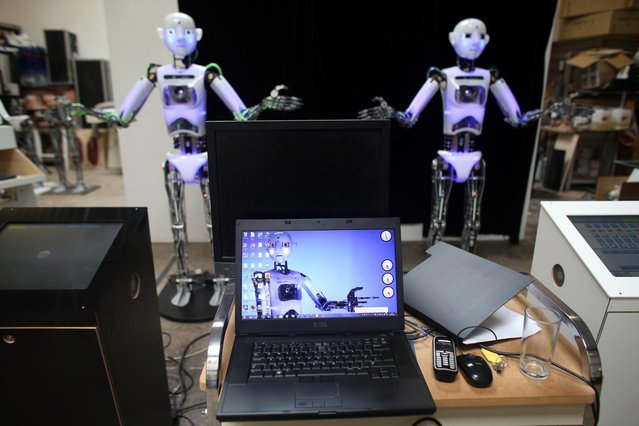 Two nearly completed RoboThespian robots inside the Engineered Arts workshop are tested on July 30, 2013 in Penryn, England. The Cornish company, operating from an industrial unit near Falmouth, is the world's only maker of commercially available life sized humanoid robots. Now in its third generation, the fully interactive and multilingual RoboThespian robot is sold around the world to science centres and visitor attractions, but increasingly to academic research groups and universities where they are used as research and development platforms. (Photo by Matt Cardy/Getty Images) 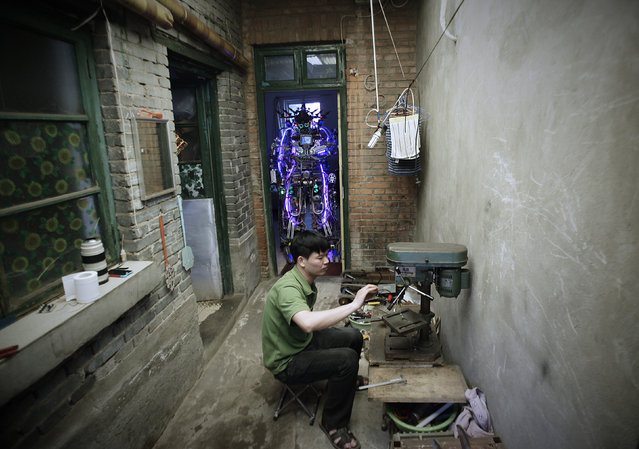 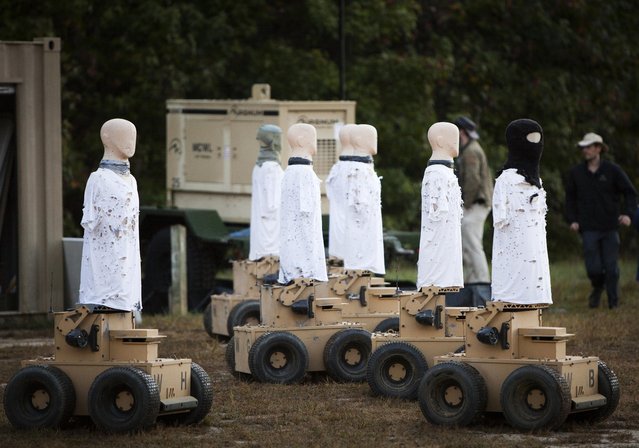 The CEOs of Marathon set and prepare Robotic Moving Targets for use in the Moving Target Technique Limited Objective Experiment 2 at Marine Corps Base Quantico, Va., September 24, 2013. The robots, developed by the Australian company Marathon, present a target the size of an average person, fall over when shot and can simulate average walking and running paces from four to eight miles an hour. The experiment tests the most effective technique and method to engage moving targets with the M-4 carbine and M-27 infantry automatic rifle. (Photo by Pfc. Eric T. Keenan/U.S. Marine Corps) 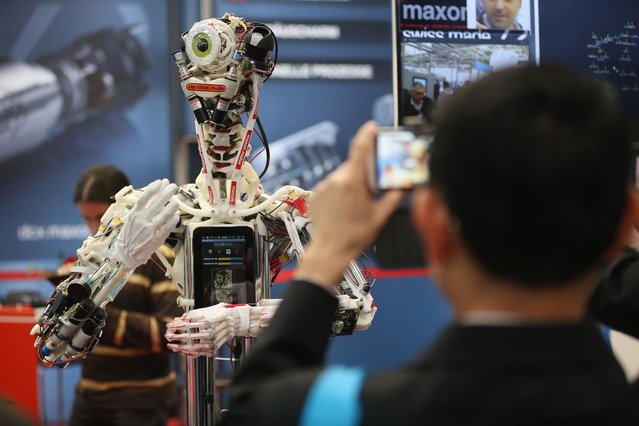 A robot stands on display at the Maxon Motor stand at the Hannover Messe 2013 industrial trade fair on April 8, 2013 in Hanover, Germany. (Photo by Sean Gallup/Getty Images) 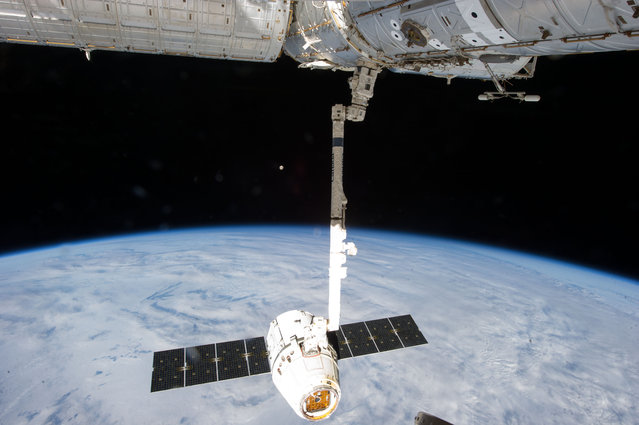 This image provided by NASA is one of a series of still photos documenting the process to release the SpaceX Dragon-2 spacecraft from the International Space Station, on March 26, 2013. The spacecraft, filled with experiments and old supplies, can be seen in the grasp of the Space Station Remote Manipulator System's robot arm or CanadArm2 after it was undocked from the orbital outpost. The Dragon was scheduled to make a landing in the Pacific Ocean, off the coast of California, later in the day. The moon can be seen at center. (Photo by AP Photo/NASA) 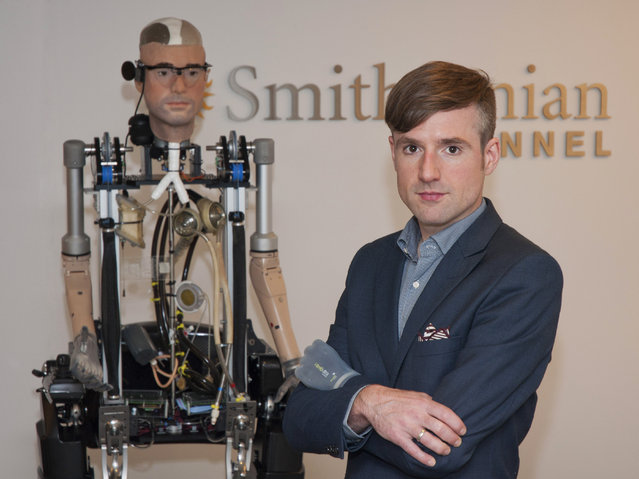 In this Wednesday, October 9, 2013 photo provided by Showtime, Bertolt Meyer, a social psychologist for the University of Zurich, poses for a photo in New York. Meyer is the face of the the Bionic Man and is featured in the Smithsonian Channel original documentary, “The Incredible Bionic Man”. (Photo by Joe Schram/AP Photo/Showtime) 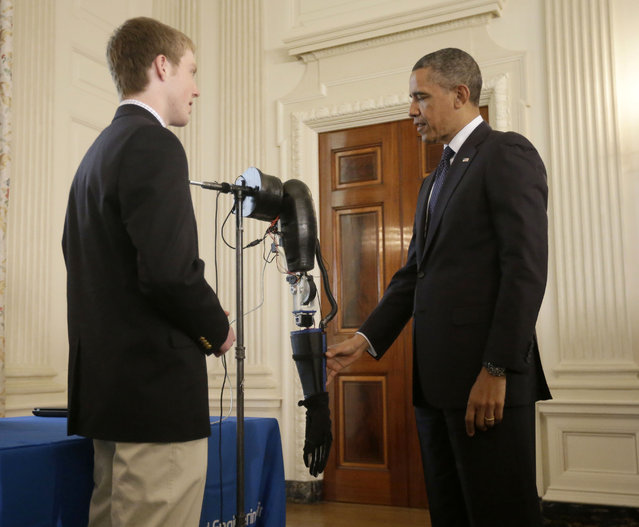 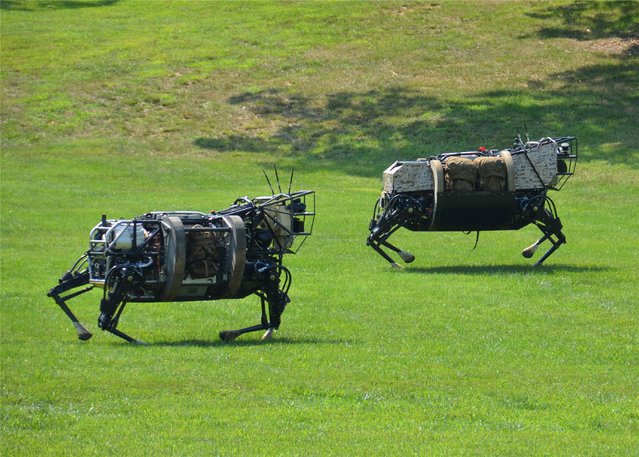 Two four-legged robots, part of DARPA's Legged Squad Support System (LS3) program, run through a field during testing. The semi-autonomous LS3 machines are being designed to help carry heavy loads through rugged terrain, interacting with troops in a similar way to a trained pack animal. (Photo by DARPA) 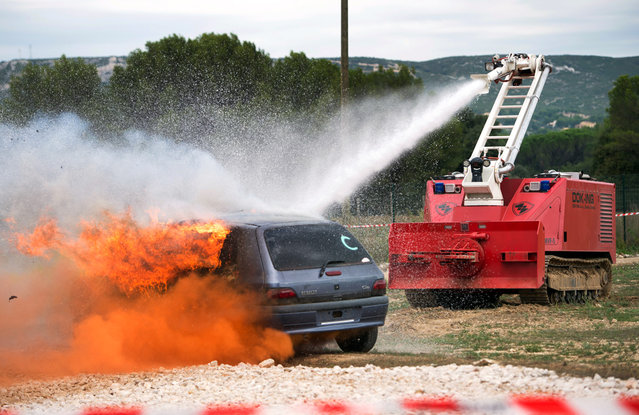 An MVF-5 Multifunctional Robotic Firefighting System by company Dok-Ing sprays water canon as part of a TIEMS annual conference entitled “Robotics in emergency and crisis management, use of UGVs, from Military and EOD to Civil protection” at the Bouches-du-Rhone Fire Department school (SDIS 13) in Velaux, southern France. (Phioto by Bertrand Langlois/AFP Photo) 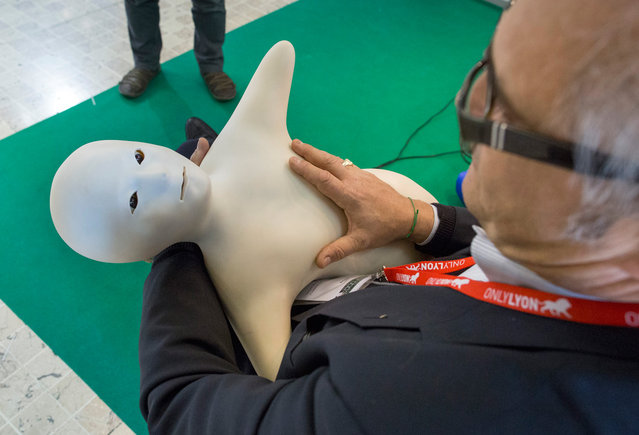 A man holds a Telenoid R1 robot during the Innorobo 2013 fair (Innovation Robotics Summit) as companies and research centers present their latest technologies in robotics in Lyon, on March 19, 2013. The Telenoid R1 is designed as a telepresence robot, to serve as a remote presence for a person, such as a grandchild, and allow people to communicate in a more natural setting. (Photo by Robert Pratta/Reuters) 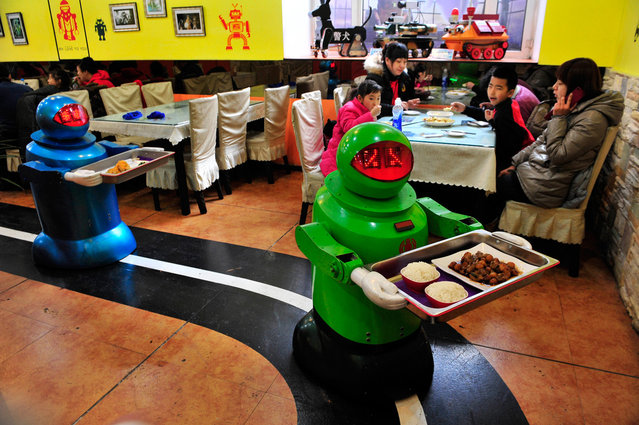 Robots deliver dishes to customers at a Robot Restaurant in Harbin, Heilongjiang province, China, on January 12, 2013. Opened in June 2012, the restaurant has gained fame in using a total of 20 robots, which range in heights of 1.3-1.6 meters (4.27-5.25 ft), to cook meals and deliver dishes. The robots can work continuously for five hours after a two-hour charge, and are able to display over 10 expressions on their faces and say basic welcoming sentences to customers. (Photo by Sheng Li/Reuters) 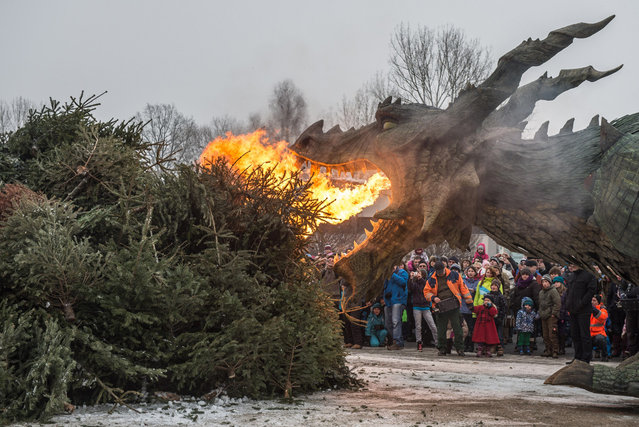 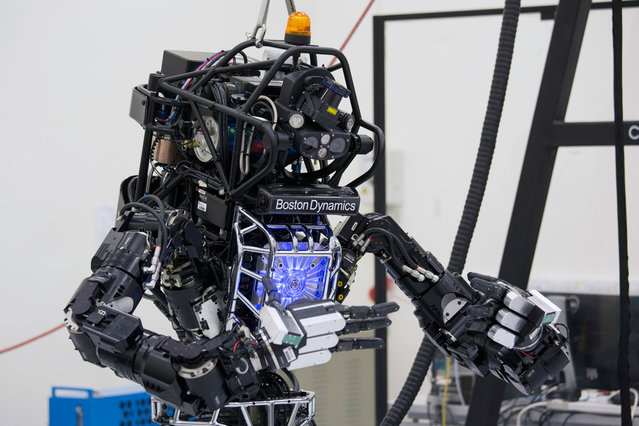 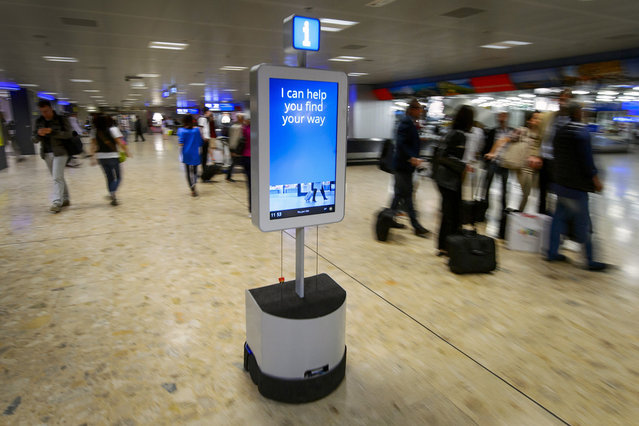 A robot helps passengers to find their way through the baggage claim area of the Geneva International Airport, on June 13, 2013. Geneva airport is using the autonomous robot to accompany travelers to a dozen destinations such as trolleys, ATM, lost luggage room, showers or toilets. (Photo by Fabrice Coffrini/AFP Photo) 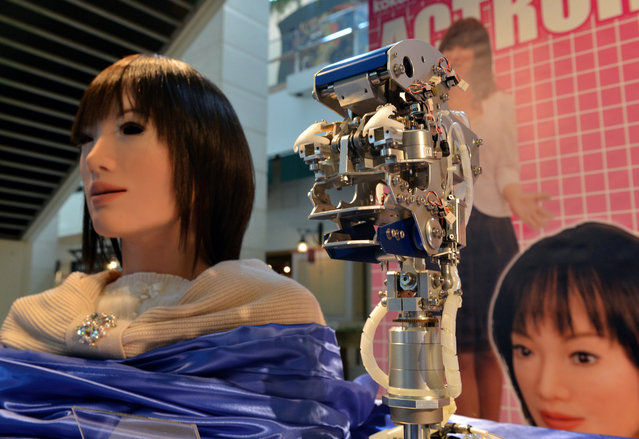 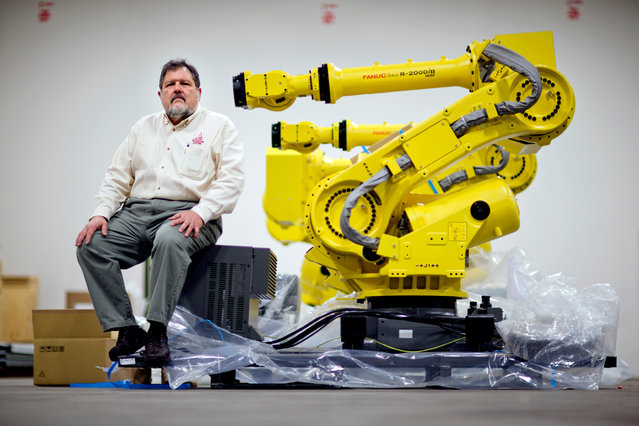 Rosser Pryor, Co-owner and President of Factory Automation Systems, sits next to a new high-performance industrial robot at the company's Atlanta facility, on January 15, 2013. Pryor, who cut 40 of 100 workers since the recession, says while the company is making more money now and could hire ten people, it is holding back in favor of investing in automation and software. (Photo by David Goldman/AP Photo) 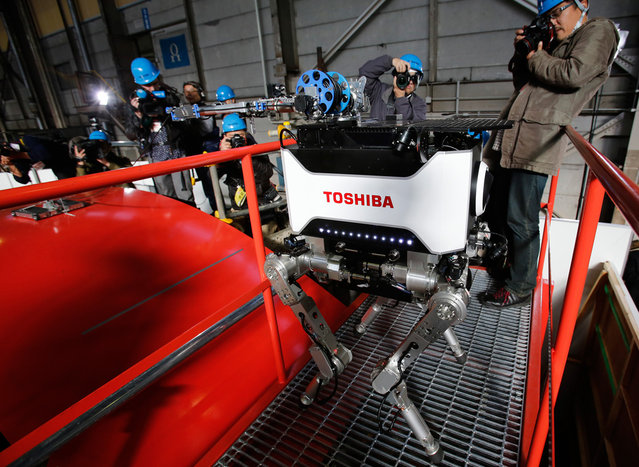 Photographers take photos of Toshiba Corp's new four-legged robot which the company says is capable of carrying out investigative and recovery work at tsunami-crippled Fukushima Daiichi nuclear power plant during a demonstration at the company's Yokohama complex in Yokohama, on November 21, 2012. The new tetrapod robot, which is able to walk on uneven surfaces, avoid obstacles and climb stairs, integrates a camera and dosimeter and is able to investigate the condition of nuclear power plants by remote-controlled operation. (Photo by Yuriko Nakao/Reuters) 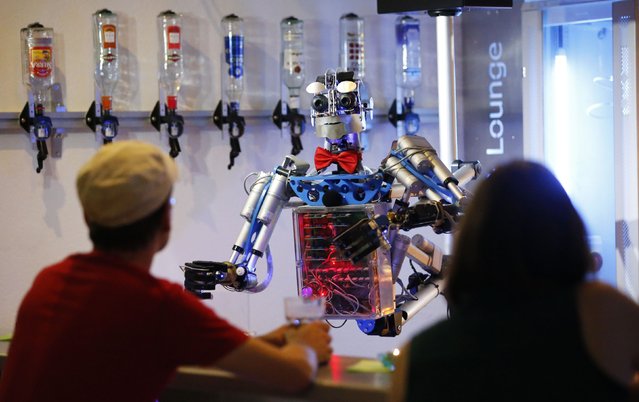 Humanoid robot bartender “Carl” interacts with guests at the Robots Bar and Lounge in the eastern German town of Ilmenau, July 26, 2013. “Carl”, developed and built by mechatronics engineer Ben Schaefer who runs a company for humanoid robots, prepares spirits for the mixing of cocktails and is able to interact with customers in small conversations. (Photo by Fabrizio Bensch/Reuters) 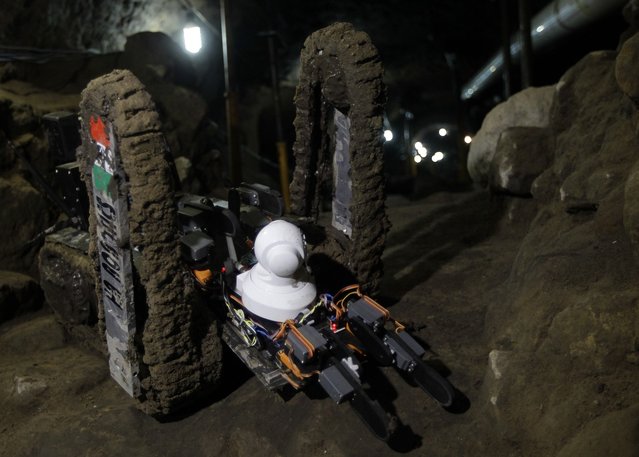 A robot used to explore ruins is seen on the entrance of a tunnel in the archaeological area of the Quetzalcoatl Temple near the Pyramid of the Sun at the Teotihuacan archaeological site, about 60 km (37 miles) north of Mexico City April 22, 2013.A robot has discovered three ancient chambers at the last stretch of unexplored tunnel at Mexico's famed Teotihuacan archaeological site on Monday, the first robotic discovery of its kind in the Latin American country. Named Tlaloc II after the Aztec god of rain, the robot was first lowered into the depths of the 2,000-year-old tunnel under the Quetzalcoatl Temple to check it was safe for human entry. After months of exploration, the remote-controlled vehicle has relayed back video images to researchers of what appears to be three ancient chambers located under the Mesoamerican city's pyramid. (Photo by Henry Romero/Reuters) 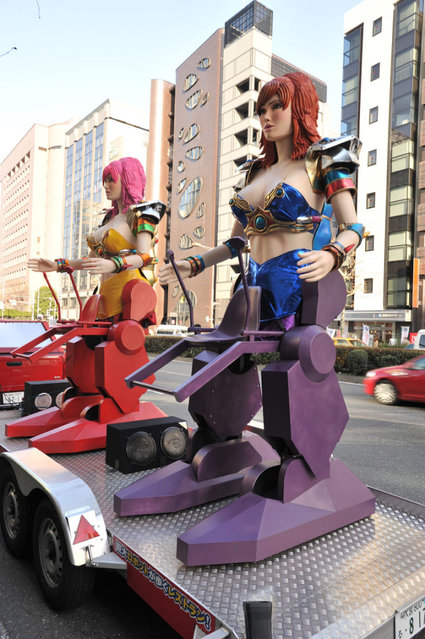