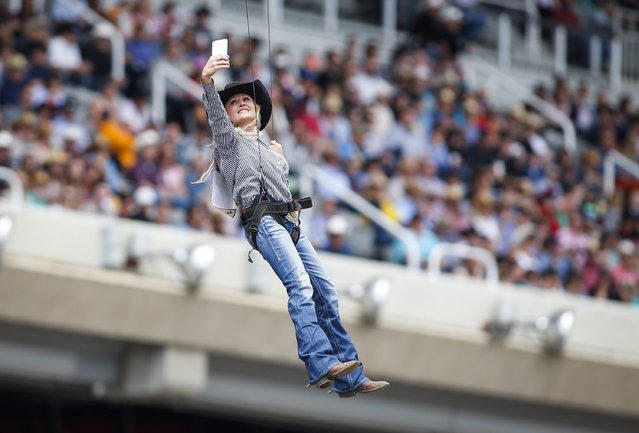 Barrel racer Carlee Pierce of Marietta, Okla., takes a photo as she is lowered on wires into the Calgary Stampede rodeo grounds during opening ceremonies in Calgary, Alberta, Sunday, July 5, 2015. (Photo by Jeff McIntosh/The Canadian Press via AP Photo) 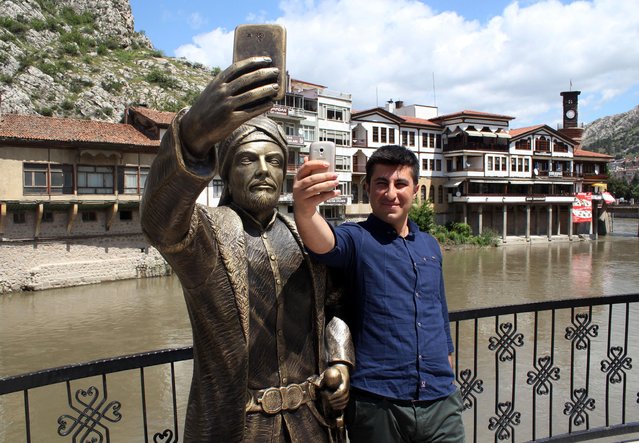 In this May 10, 2015 photo a Turkish man takes a photo of himself with a statue of an Ottoman prince taking a selfie with a cellphone erected in Amasya, Turkey. The statue has met swift and violent criticism and just days after it was erected, vandals – perhaps offended by disparagement of Ottoman history – have hacked off the phone and the prince's sword. The mayor's office in Amasya, an hour south of the Black Sea coast, says police have been ordered to guard the disarmed prince. (Photo by AP Photo) 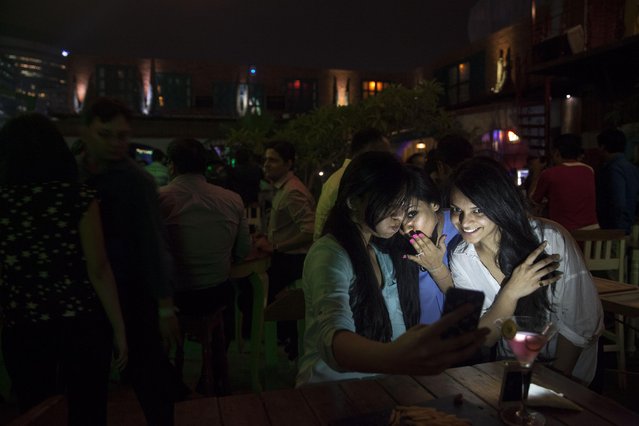 In this June 11, 2015 photo, Indian girls take a selfie at a party hosted by “TrulyMadly”, one of India's online dating apps in Gurgaon, India. Hundreds of thousands of young Indians are nervously exploring online dating apps, breaking with India's centuries-old traditions governing marriage and social conduct. The dating app market has exploded in recent years, with more than a dozen companies operating in the country and more than a million smartphone users who have downloaded at least one of them. (Photo by Tsering Topgyal/AP Photo) 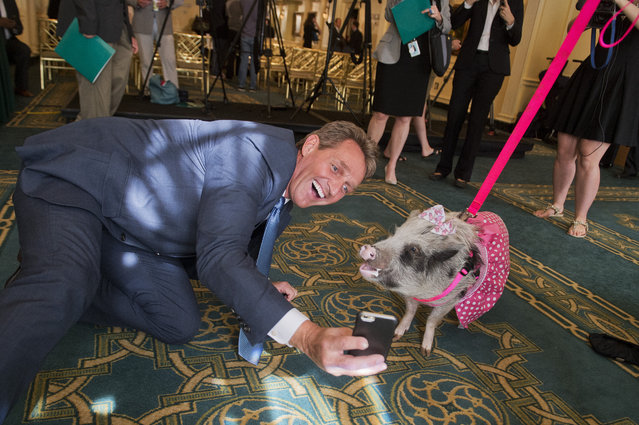 Sen. Jeff Flake, R-Ariz., takes a selfie with Faye, a pot belly pig, after a news conference held by Citizens Against Government Waste at the Phoenix Park Hotel to release the 2015 Congressional Pig Book which identifies pork-barrel spending in Congress, May 13, 2015. (Photo by Tom Williams/CQ Roll Call via Getty Images) A woman takes a selfie as she sunbathes on a beach during a hot spring day in Marbella, southern Spain, May 13, 2015. (Photo by Jon Nazca/Reuters) 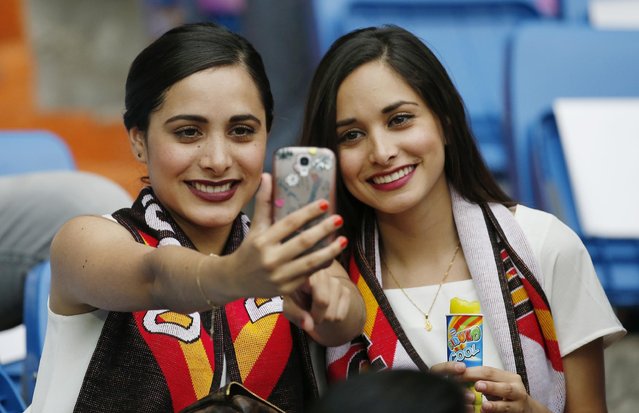 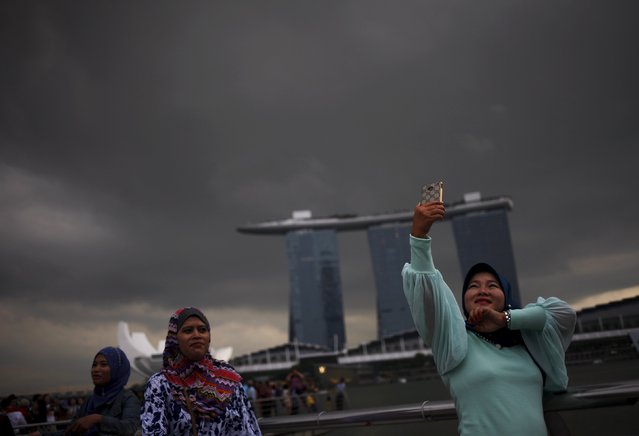 An Indonesian tourist poses for photos as storm clouds gather at the Merlion Park in Singapore May 14, 2015. (Photo by Edgar Su/Reuters) 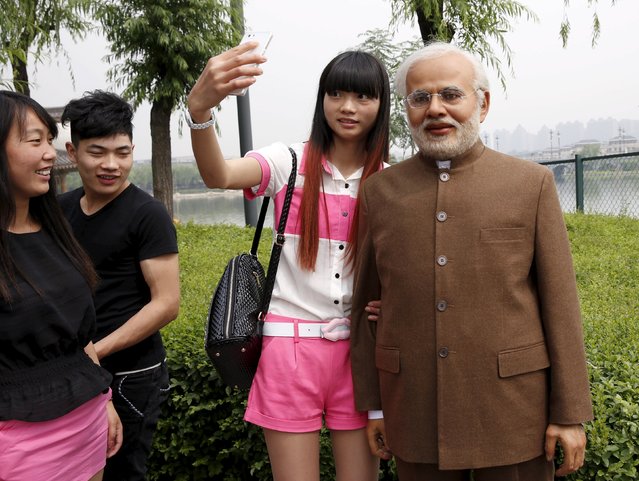 A woman poses for a selfie with a silica gel sculpture of Indian Prime Minister Narendra Modi, which was made by local sculpture artists, at a park in Xian, Shaanxi province, China, May 14, 2015. Modi visited Xian on Thursday, which was the first stop of his three-day visit to China. (Photo by Reuters/Stringer) 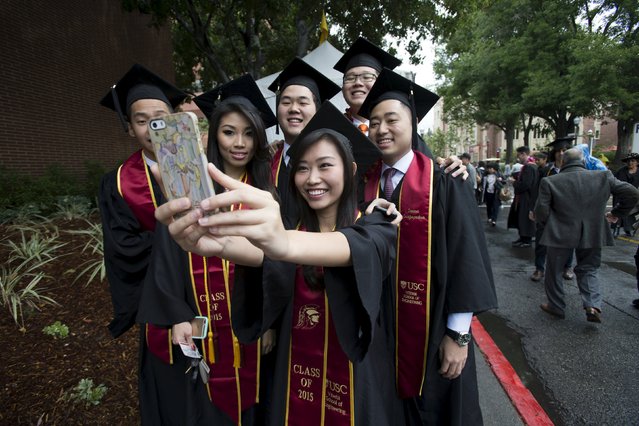 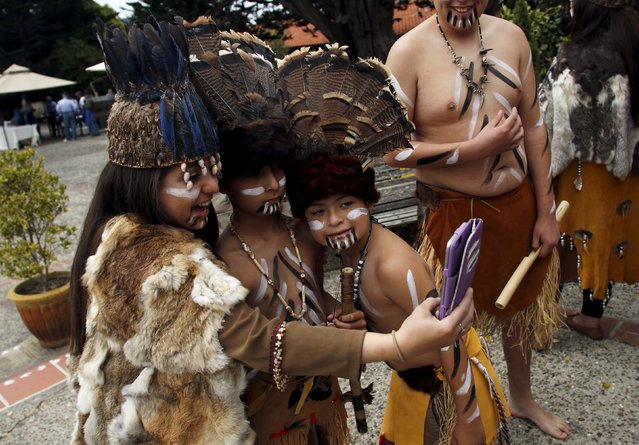 Members of the Costanoan Rumsen Carmel Tribe of the Ohlone Nation take a selfie during Founder's Day at the Carmel Mission in Carmel, California, June 28, 2015. The Mission was founded by Franciscan friar Junipero Serra in 1771. The Ohlone people inhabited the central coast of California when the Spanish missionaries arrived. (Photo by Michael Fiala/Reuters) 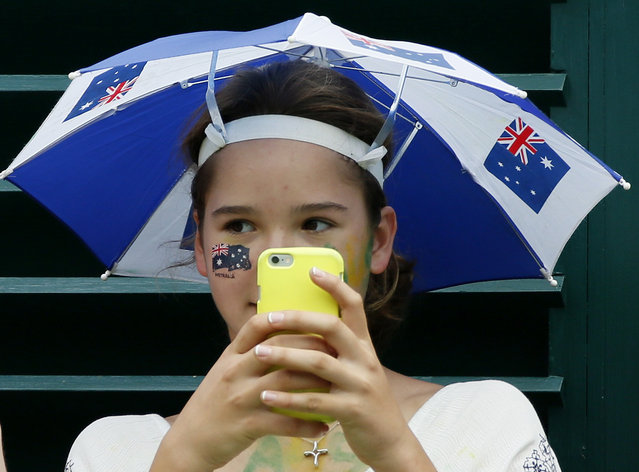 Australian fan with a novelty sun hat on Court 18 at the Wimbledon Tennis Championships in London, July 1, 2015. (Photo by Stefan Wermuth/Reuters) A tourist takes a selfie in the village of Oia on the Greek island of Santorini, Greece, July 1, 2015. (Photo by Cathal McNaughton/Reuters) 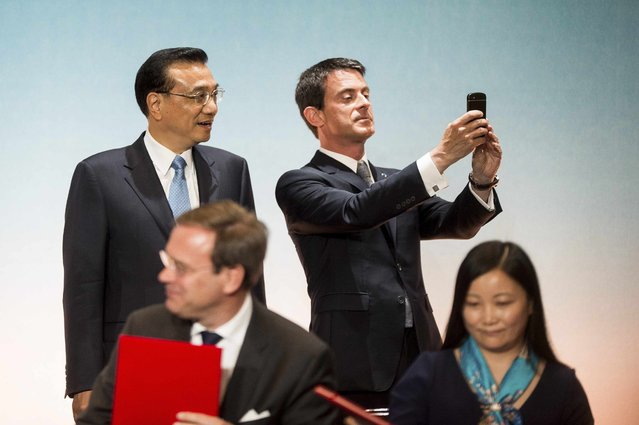 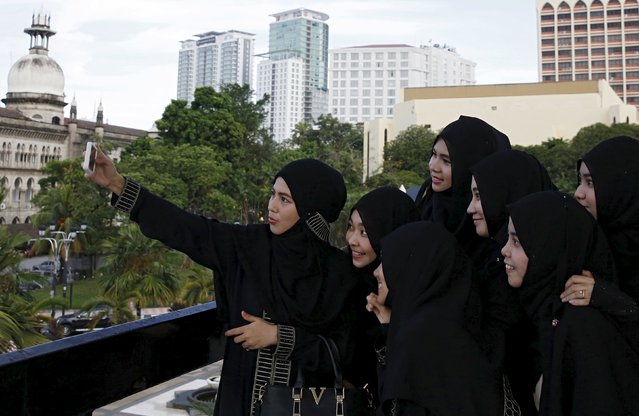 Women pose for a picture at the national mosque during Ramadan in Kuala Lumpur, Malaysia, July 4, 2015. (Photo by Olivia Harris/Reuters) 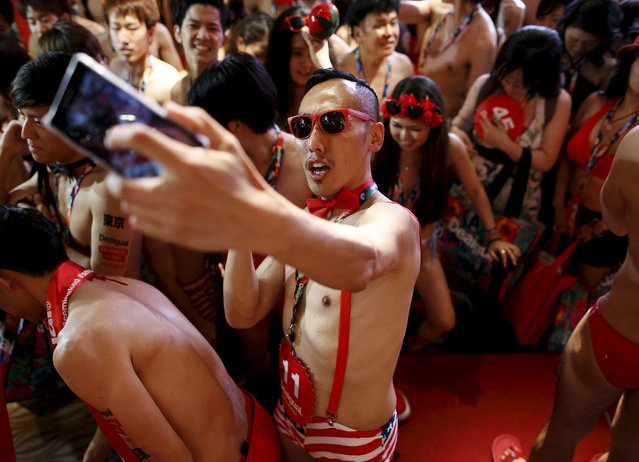 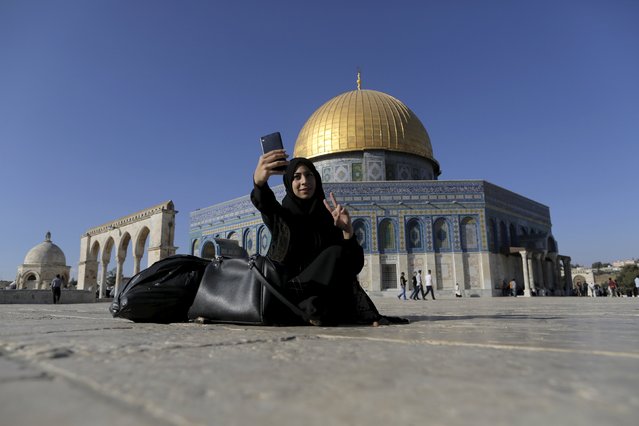 Palestinian Nura Hassan, 17, from the West Bank town of Bethlehem, takes a selfie photo in front of the Dome of the Rock on the compound known to Muslims as Noble Sanctuary and to Jews as Temple Mount, in Jerusalem's Old City, during the holy month of Ramadan, June 29, 2015. This is Hassan's first visit to the compound. Palestinians young and old have jumped on a trend for taking “selfies” at Al Aqsa, the 8th century Muslim shrine in Jerusalem, both as a personal memento and for relatives prevented from or unable to visit the ancient compound. (Photo by Ammar Awad/Reuters) 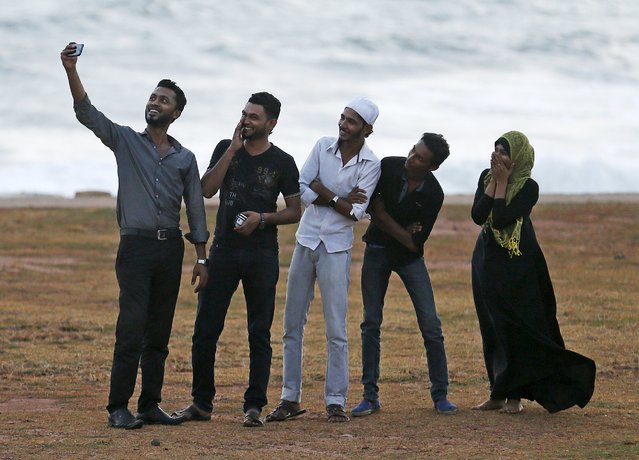 A Muslim youth takes a selfie with his friends before they break their fast at the end of the day during the holy month of Ramadan in Colombo, Sri Lanka, July 8, 2015. (Photo by Dinuka Liyanawatte/Reuters) 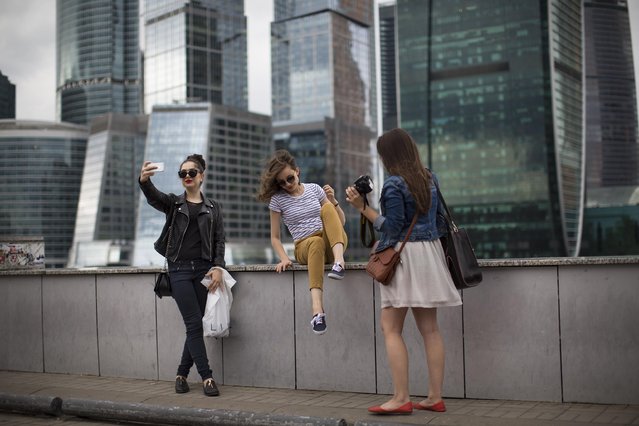 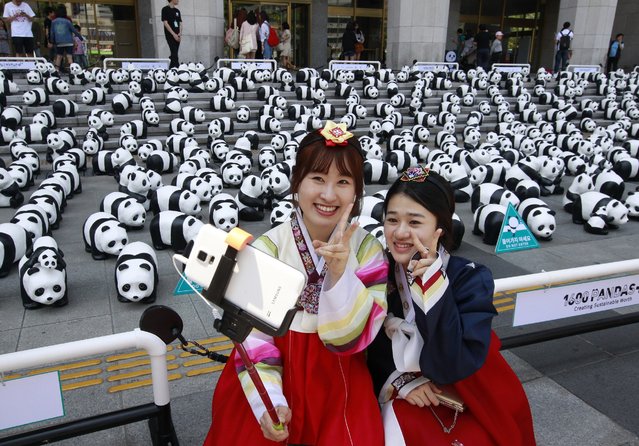 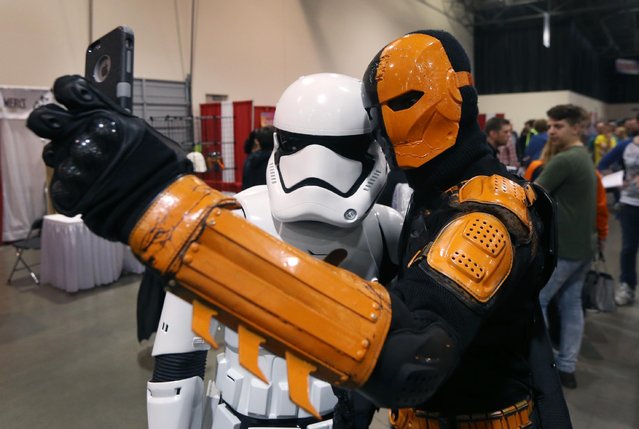 Benzy Deviveau, dressed as Deathstroke, right, takes a selfie with Ted Ruler, a Star Wars Stormtrooper, at the Suburban Collection Showcase, Friday, May 15, 2015, in Novi, Mich. The three-day pop-culture extravaganza will welcome dozens of celebrities from the worlds of TV, film and beyond as well as thousands of fans. Motor City Comic Con also brings in comic book and multimedia dealers who offer merchandise, including comic books, art, T-shirts and movie memorabilia. (Photo by Carlos Osorio/AP Photo) 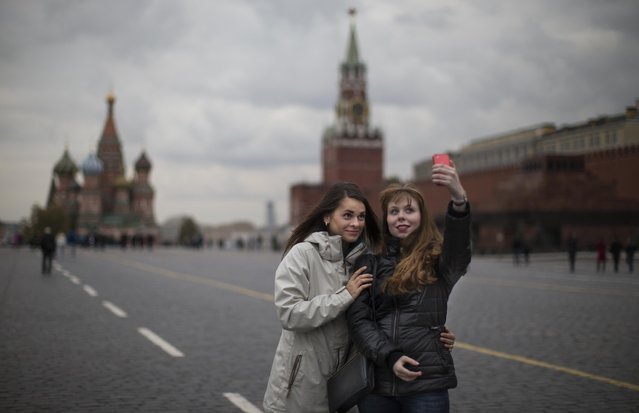 In this Monday, October 6, 2014 file photo, two young women pose for a selfie on Red Square with St. Basil's Cathedral, left, and the Spasskaya Tower, right in Moscow, Russia. Alarmed by the number of Russians who have been killed while taking photos of themselves with smartphones, Russian police have started a new campaign called “Safe Selfies”. The instructions issued Tuesday, July 7, 2015 warn against standing on railroad tracks, climbing onto roofs or posing with a gun or a tiger. (Photo by Alexander Zemlianichenko/AP Photo) 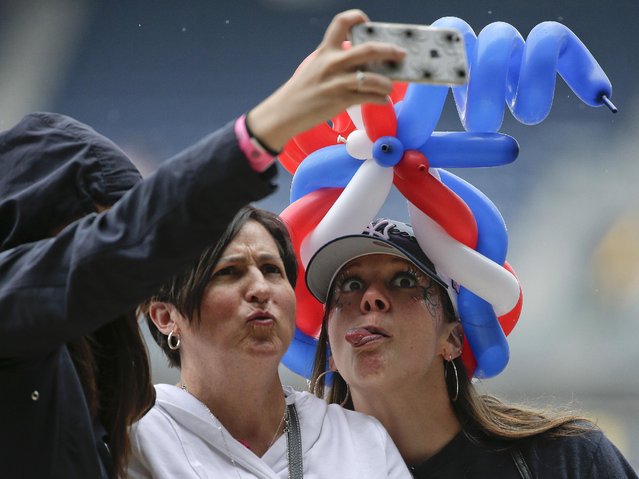 Kimberly O'Kane, right, of Stony Point, N.Y., poses for a selfie with her aunt, Catherine O'Kane of Springfield, Penn., center, and cousin Corinne O'Kane, of Hoboken, N.J., while attending a baseball game between the Tampa Bay Rays and the New York Yankees, Saturday, July 4, 2015, in New York. (Photo by Julie Jacobson/AP Photo) 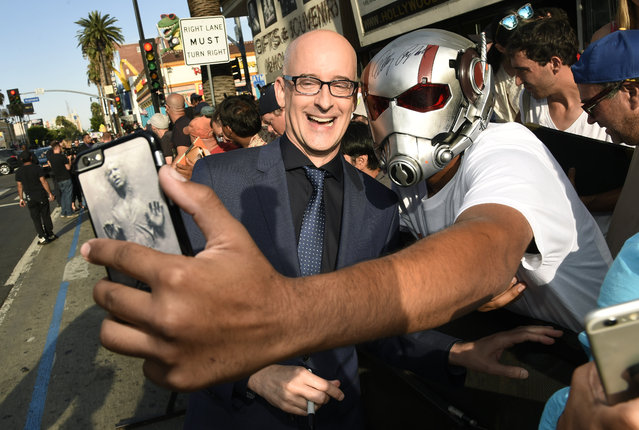 Peyton Reed, director of “Ant-Man”, poses for a selfie with a crowd member at the premiere of the film at The Dolby Theatre on Monday, June 29, 2015, in Los Angeles. (Photo by Chris Pizzello/Invision/AP Photo) 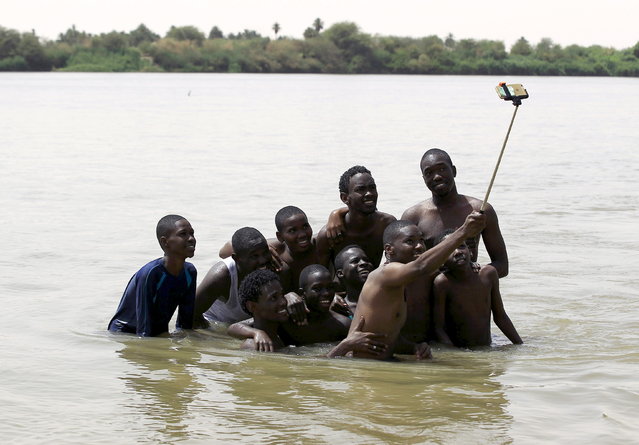 A group of young men use a selfie stick to take a picture of themselves in shallow waters known as the first cataract of the River Nile outside Khartoum, Sudan, May 22, 2015. In Sudan, which faces insurgences in the western region of Darfur and along its border with breakaway South Sudan, as well as double-digit inflation and high unemployment, life goes on for young people in the capital Khartoum. (Photo by Mohamed Nureldin Abdallah/Reuters)
Edit Del
09 Jul 2015 12:20:00, post received 0 comments
Publication archive:
←   →
Popular tags:
All tags
Last searches: