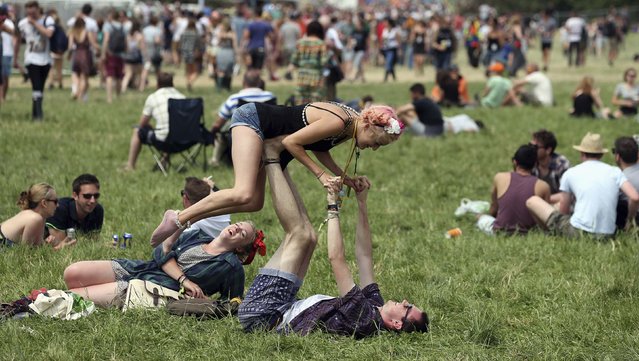 Festival goers are pictured in front of the Pyramid Stage at Worthy Farm in Somerset, on the second day of the Glastonbury music festival June 26, 2014. (Photo by Cathal McNaughton/Reuters) 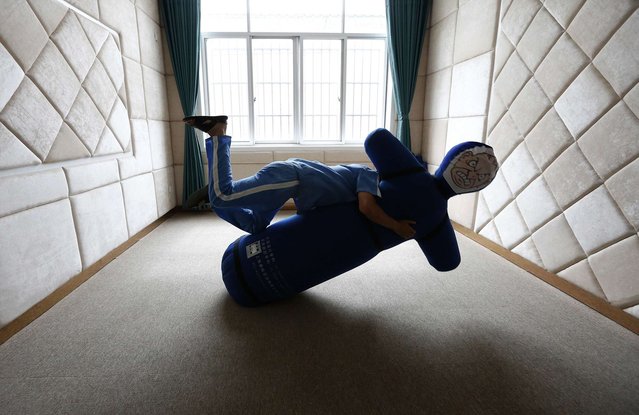 A recovering drug addict wrestles with a punching dummy to unleash pent-up anger during a psychological therapy at the Shiliping compulsory drug rehabilitation center in Longyou county, Zhejiang province, China, on June 19, 2014. Established in 2008, the center is one of the biggest in China in terms of numbers of inmates and facilities. Recovering drug addicts in the center are undergoing treatment with a strict regime in physical exercises, psychological therapies and medication, according to local media. (Photo by William Hong/Reuters) 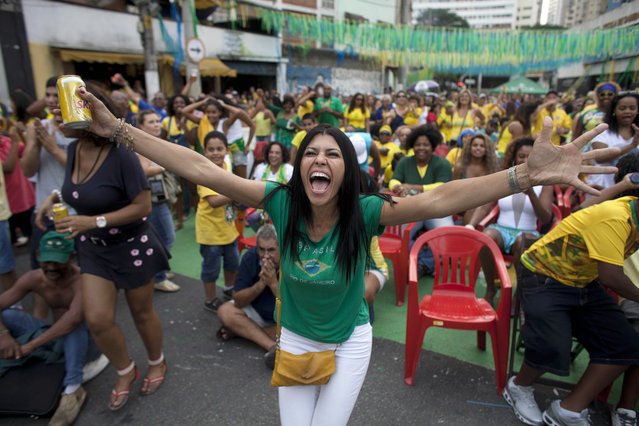 Brazil soccer fans celebrate after their team scored a penalty shot against Chile as they watch the World Cup round of 16 match on TV outside the Vai Vai Samba school in Sao Paulo, Brazil, Saturday, June 28, 2014. Brazil won 3-2 on penalties. (Photo by Dario Lopez-Mills/AP Photo) 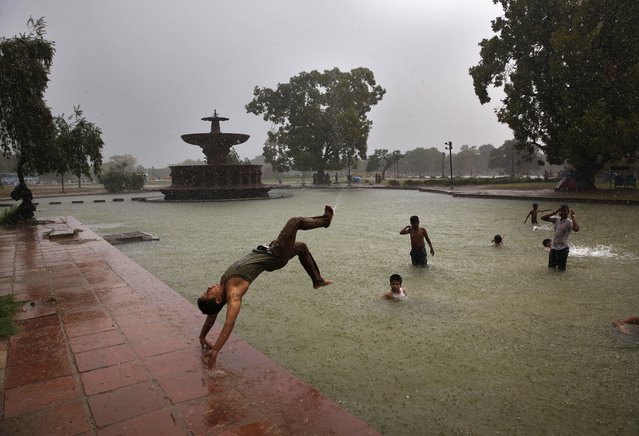 A boy somersaults into a water body as it rains in New Delhi, India, Wednesday, July 2, 2014. According to the weather office, the monsoon rains are expected to arrive at the national capital in a couple of days. (Photo by Manish Swarup/AP Photo) 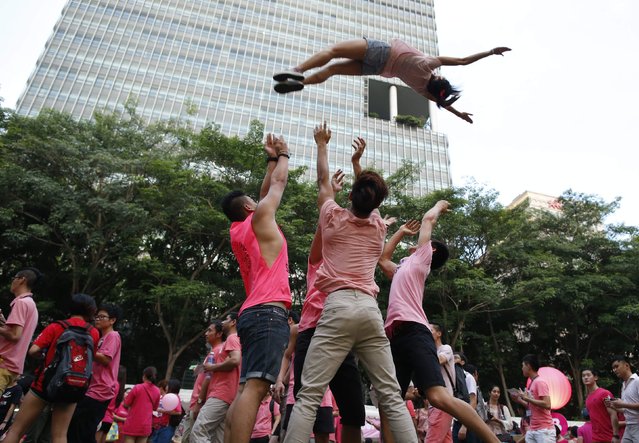 Participants dressed in pink perform cheerleading stunts before taking part in the forming of a giant pink dot at the Speakers' Corner in Hong Lim Park in Singapore June 28, 2014. The annual Pink Dot Sg event promotes an acceptance of the Lesbian, Gay, Bisexual and Transgender (LGBT) community in Singapore, according to organizers. (Photo by Edgar Su/Reuters) 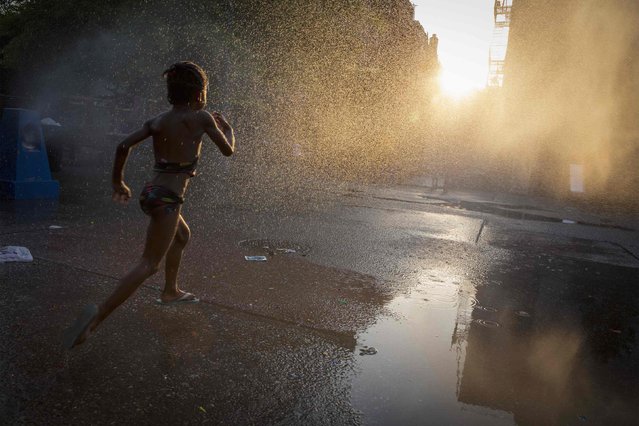 A young girl runs through a sprinkler at a playground in the Brooklyn borough of New York July 7, 2014. (Photo by Brendan McDermid/Reuters) 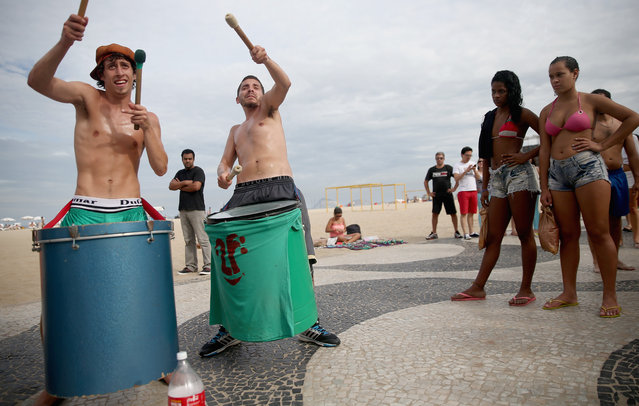 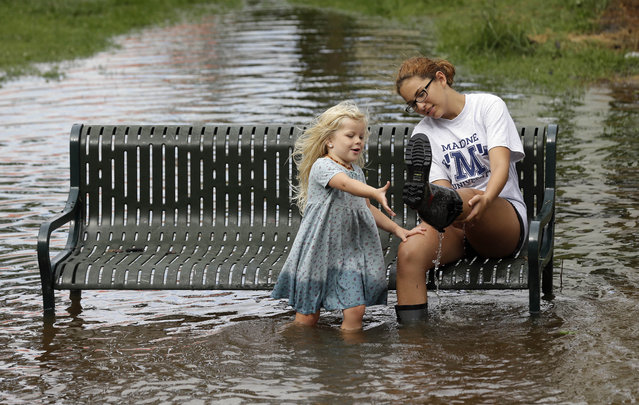 Katie Bender gets some assistance from Johanna Bender, left, as they dump water from a boot while sitting on a flooded street after Hurricane Arthur passed through in Manteo, N.C., Friday, July 4, 2014. Arthur began moving offshore and away from North Carolina's Outer Banks early Friday after hitting the state's barrier islands overnight, creating a Fourth of July holiday that saw flooding and tens of thousands of power outages. (Photo by Gerry Broome/AP Photo) 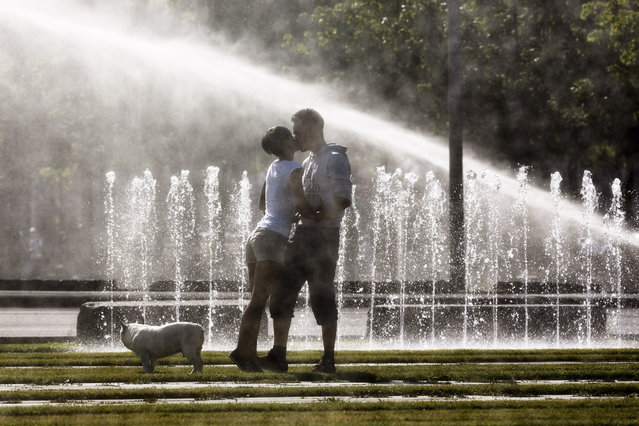 A couple kiss each other in front of water sprinklers as they walk the dog on a sunny morning near the Chancellery in Berlin, Wednesday, June 18, 2014. (Photo by Markus Schreiber/AP Photo) 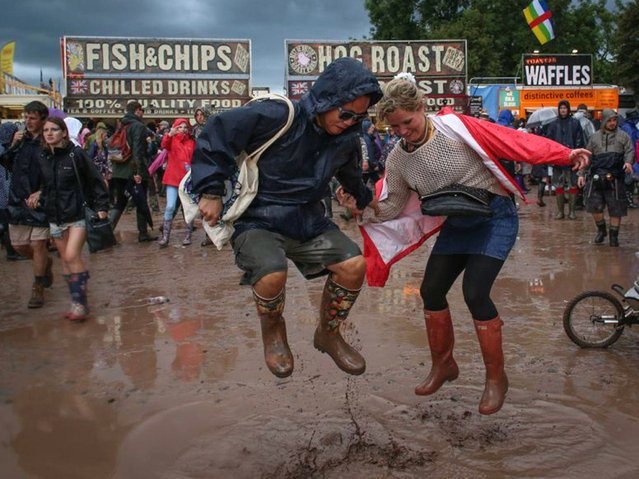 Festival goers jump in mud at Worthy Farm in Pilton during the 2014 Glastonbury Festival on June 27, 2014 in Glastonbury, England. (Photo by Matt Cardy/Getty Images) 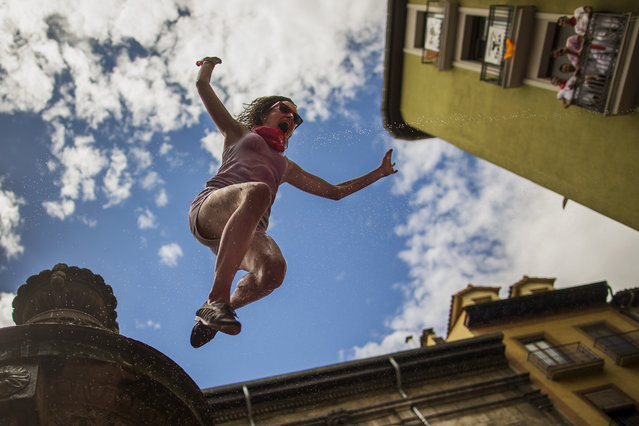 A reveler jumps from a fountain onto the crowd below, after the launch of the “Chupinazo” rocket, to celebrate the official opening of the 2014 San Fermin fiestas in Pamplona, Spain, Sunday, July 6, 2014. Revelers from around the world turned out here to kick off the festival with a messy party in the Pamplona town square, one day before the first of eight days of the running of the bulls glorified by Ernest Hemingway's 1926 novel “The Sun Also Rises”. (Photo by Andres Kudacki/AP Photo) 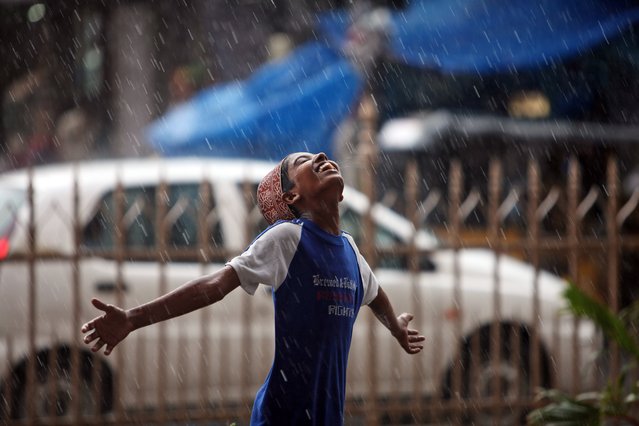 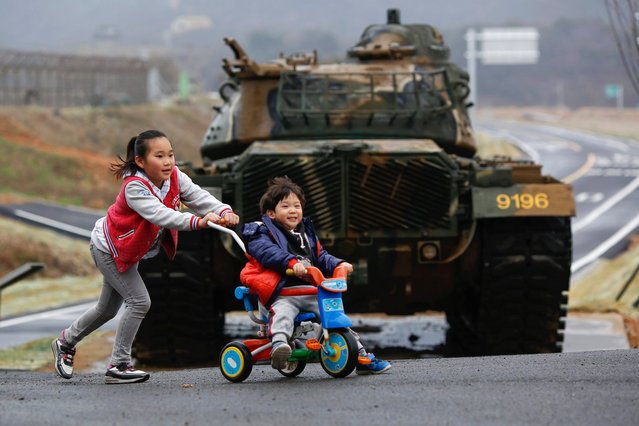 Children play in front of a tank on the island of Baengnyeong, which lies on the South Korean side of the Northern Limit Line (NLL), in the Yellow Sea April 12, 2014. (Photo by Damir Sagolj/Reuters) 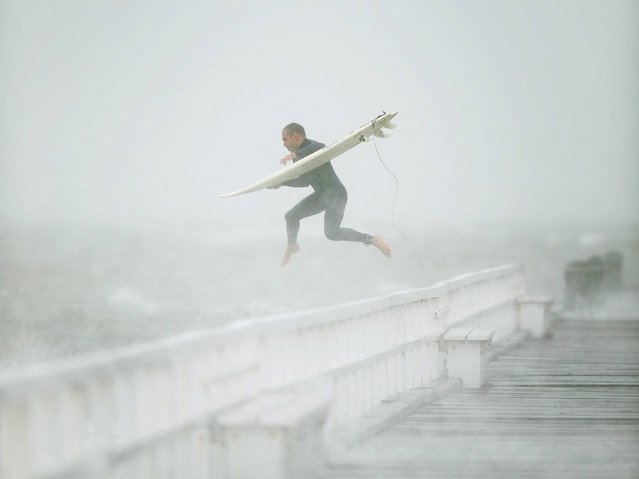 A surfer jumps off the pier into Port Phillip Bay to take advantage of the waves as a storm lashes the Melbourne area on June 24, 2014. (Photo by Mal Fairclough/AFP Photo) 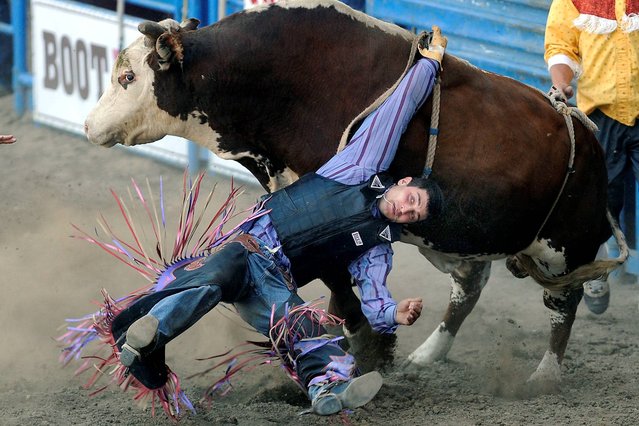 Elliot Jacoby of Fredricksburg, Texas, gets his hand tied up in the rope while being twisted around by a bull named Whirlpool at the PRCA Rodeo held at the Greeley Stampede Arena in Greeley, Colo,, Sunday, June 29, 2014. (Photo by Jim Rydbom/AP Photo/The Greeley Tribune) 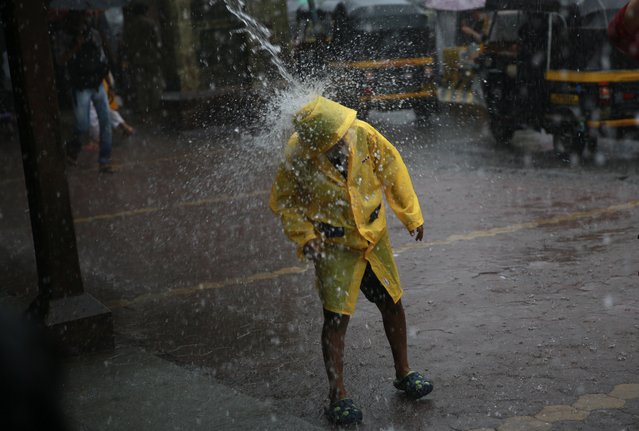 A boy stands beneath water poring from a roof during monsoon rains in Mumbai, India, Monday, July 7, 2014.The monsoon rains usually hit India from June to September. (Photo by Rafiq Maqbool/AP Photo) 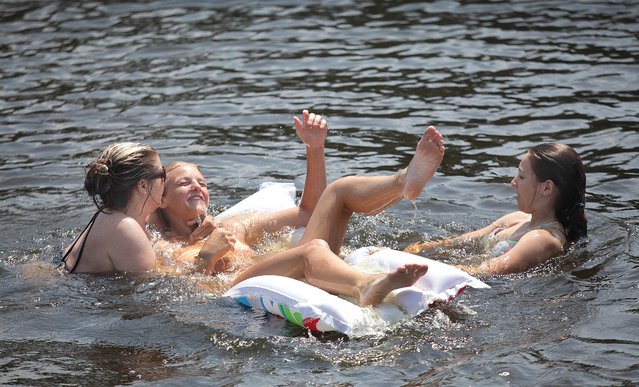 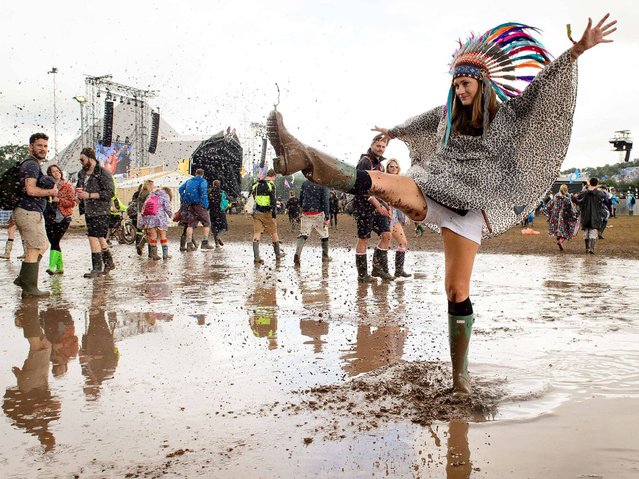 A woman kicks water in a puddle as she poses for photographers, on the first official day of the Glastonbury Festival of Music and Performing Arts on Worthy Farm in Somerset, south west England, on June 27, 2014. (Photo by Leon Neal/AFP Photo)
Edit Del
09 Jul 2014 12:53:00, post received 0 comments
Publication archive:
←   →
Popular tags:
All tags
Last searches: