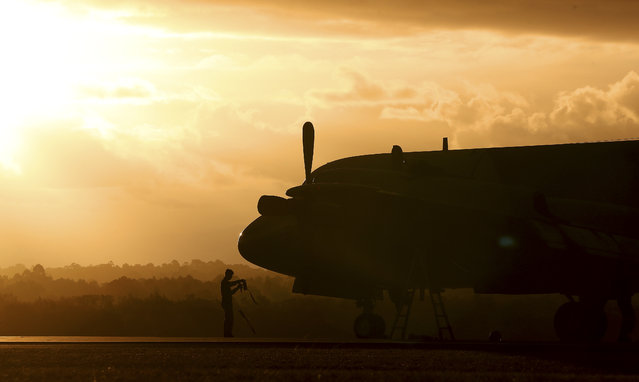 A ground crewman stands in front of a South Korean P3 Orion after it returned from the search for missing Malaysia Airlines Flight MH370 in Perth, Australia, Sunday, March 30, 2014. Australia's Prime Minister Tony Abbott said Sunday he was hopeful clues will emerge soon to help find Flight 370 even though searchers again failed to find jet debris, as relatives of Chinese passengers on the plane protested in Malaysia to demand the government apologize over its handling of the search. (Photo by Rob Griffith/AP Photo) 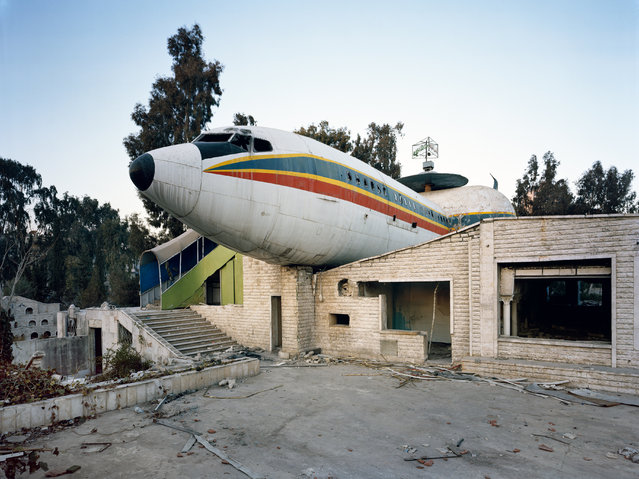 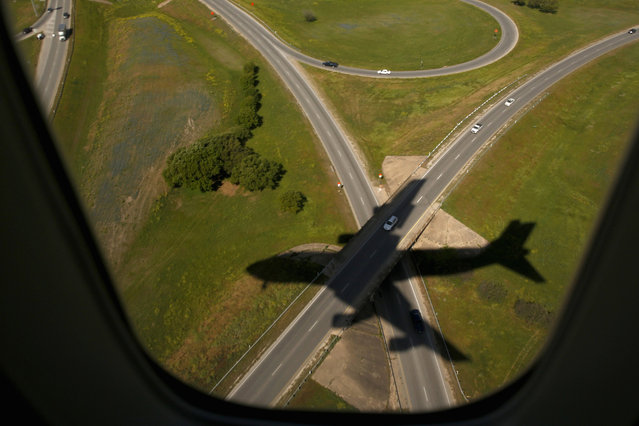 Air Force One casts a shadow upon its arrival n Austin, Texas April 10, 2014. U.S. President Barack Obama will speak at a Civil Rights Summit to commemorate the 50th anniversary of the signing of the Civil Rights Act at the LBJ Presidential Library in Austin on Thursday. (Photo by Kevin Lamarque/Reuters) 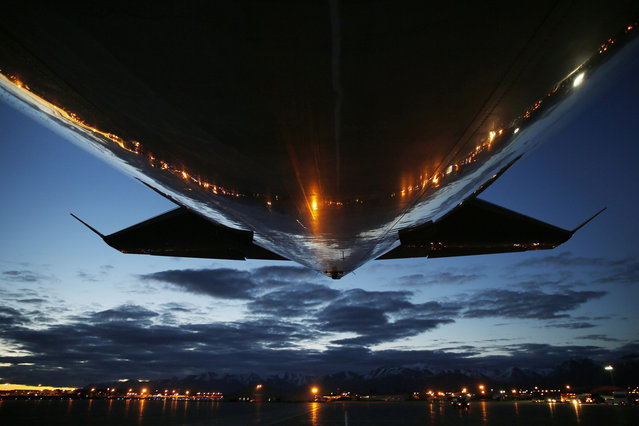 The tail section of Air Force One is pictured on the tarmac at Elmendorf Air Force Base outside Anchorage, Alaska, as U.S. President Barack Obama stayed onboard during a refuel stop on his return to the United States from Asia, April 29, 2014. (Photo by Larry Downing/Reuters) 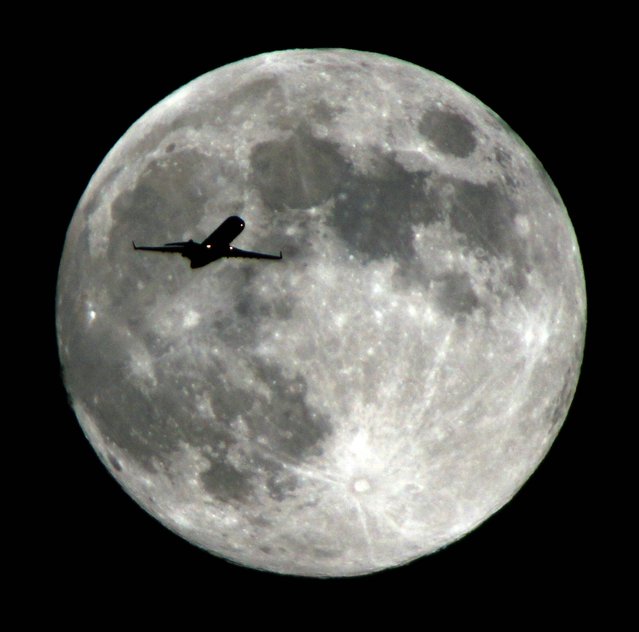 An airlines jet plane approaching Los Angeles International Airport crosses the moon as seen from Monterey Park Calif., Wednesday night, September 18, 2013. The Harvest Moon is the full moon that falls closest to the autumnal equinox, which marks the beginning of fall in the Northern Hemisphere. (Photo by Nick Ut/AP Photo) 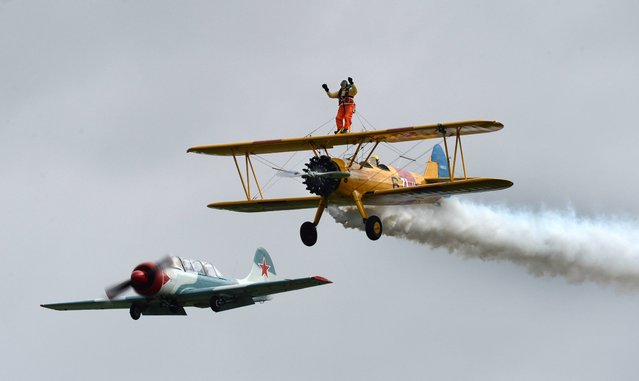 Undated handout photo issued by Coleraine Council of 93-year-old Tom Lackey who launched this year's Coleraine Borough Council's N.I International Air Show, sponsored by RSA, by wing walking his way into the Guinness book of records as the oldest wing walker journeying across the Irish sea. Tom took off in Castle Kennedy in Stranraer, Scotland and landed at Eglington city of Derry airport. (Photo by Charles McQuillan/PA Wire) 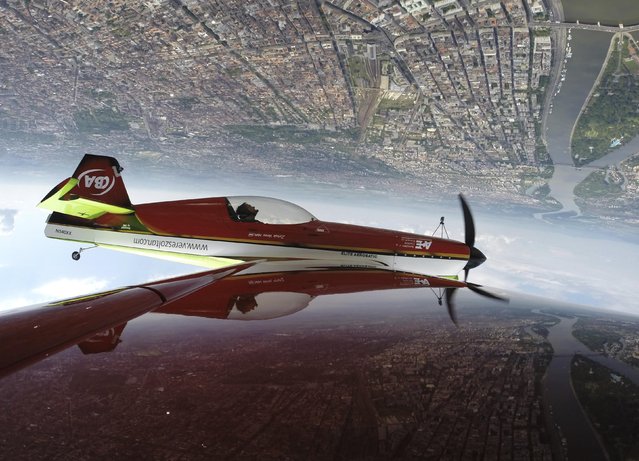 Zoltan Veres of Hungary performs with his MXS airplane during an air show in Budapest, May 1, 2014. (Photo by Laszlo Balogh/Reuters) 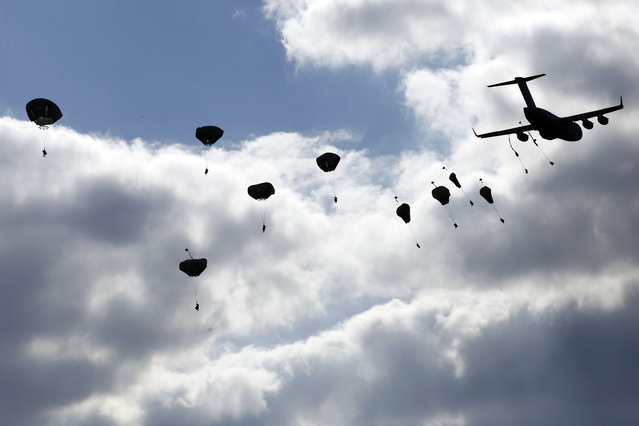 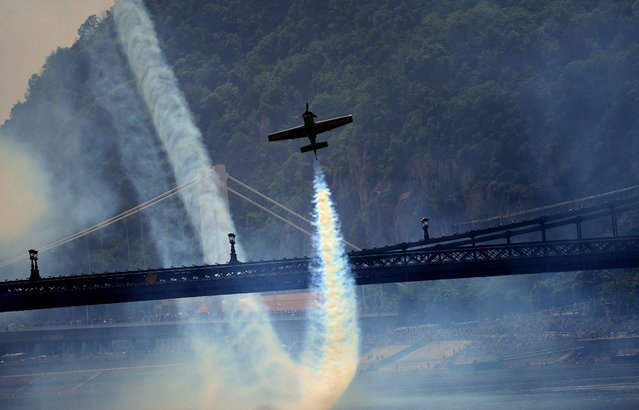 Hungarian pilot and European champion Zoltan Veres flies under the oldest Hungarian bridge, the “Lanchid” (Chain Bridge) with his “MXS” type plane on May 1, 2014 during a Red Bull flying and car show around the Danube River of Budapest downtown. (Photo by Attila Kisbenedek/AFP Photo) 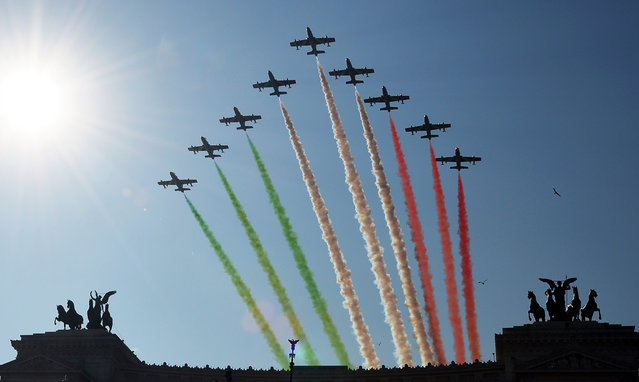 Green, white and red smoke in the colours of the Italian flag are left in the air over the Vittorio Emanuele monument by the Italian Air Force aerobatic unit “Frecce Tricolori” marking the anniversary of Italian national unification on March 17, 2014 in Rome. (Photo by Vincenzo Pinto/AFP Photo) 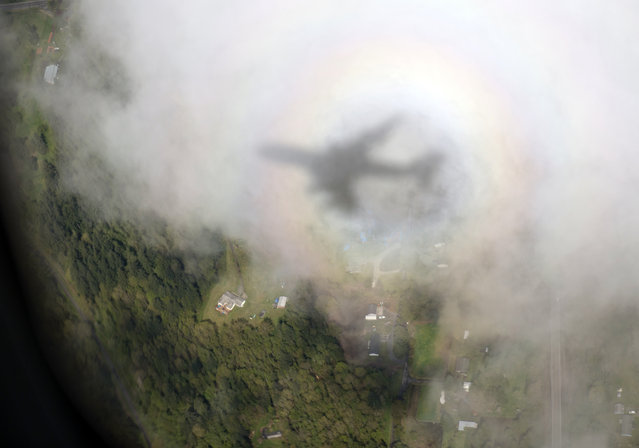 The shadow of Air Force One, with President Barack Obama aboard, is seen on a cloud as it approaches Paine Field Airport, Tuesday, April 22, 2014, in Everett, Wash., en route to Oso, Wash., the site of the deadly mudslide that struck the community in March. (Photo by Carolyn Kaster/AP Photo) 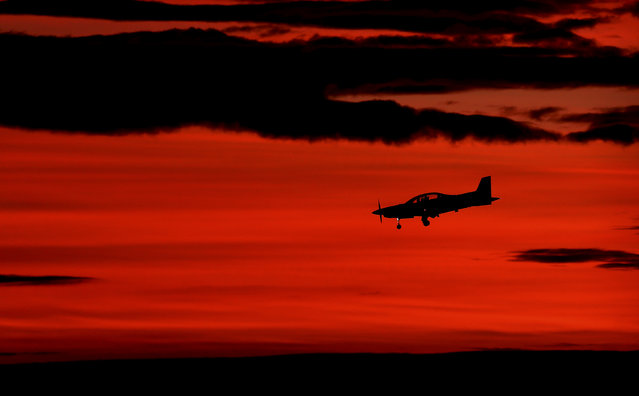 A Pilatus PC-9/A comes in for a landing at RAAF Base Pearce in Perth, Australia, Wednesday, March 26, 2014. RAAF Pearce is accommodating six nation that have joined forces Australia, New Zealand the US, Japan and Korea making this join venture one of the largest maritime search operations in history to find debris from the missing Malaysia Airlines Flight MH370. (Photo by Rob Griffith/AP Photo) 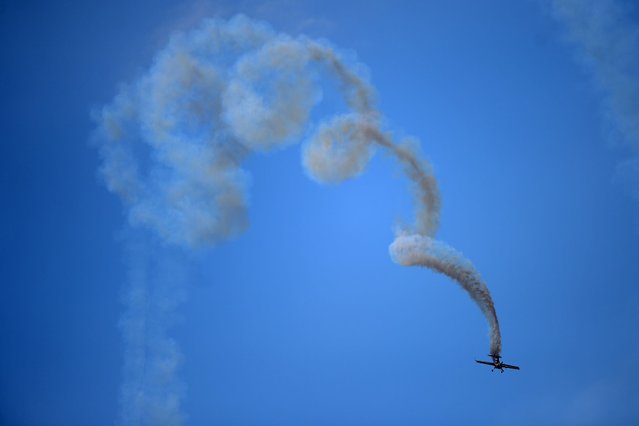 Pilot Eric Goujon flies on May 1, 2014 during a Red Bull flying and car show around the Danube River of Budapest downtown. (Photo by Attila Kisbenedek/AFP Photo) 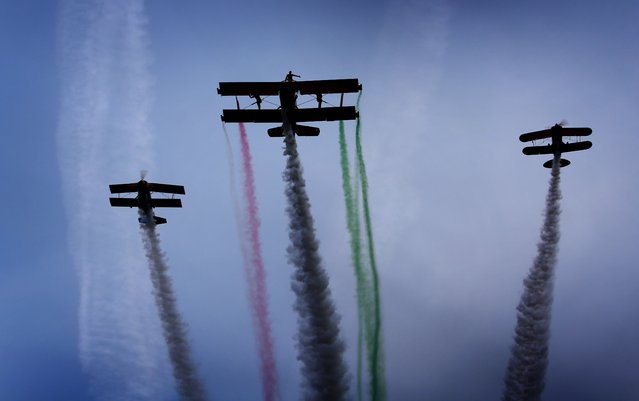 Swedish air-acrobatics perform during the Arbil Festival, in the capital of the autonomous Kurdish region of northern Iraq, Arbil, on March 11, 2014, which marks the 23rd anniversary of the uprising against the regime of toppled dictator Saddam Hussein. (Photo by Safin Hamed/AFP Photo)
Edit Del
08 May 2014 07:45:00, post received 0 comments
Publication archive:
←   →
Popular tags:
All tags
Last searches: