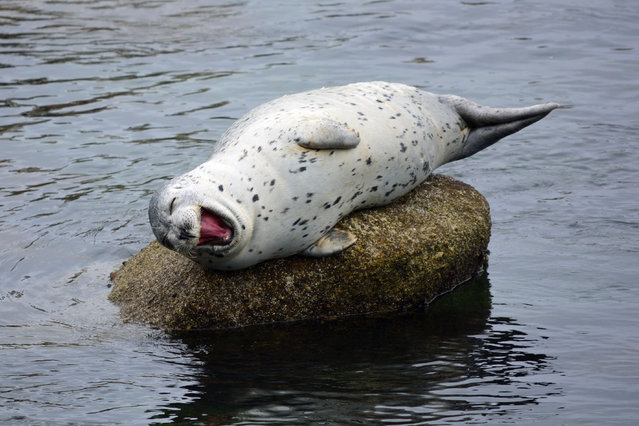 These heart-warming shots show a harbour seal thoroughly enjoying itself – smiling, waving and even LAUGHING while perched on a rock. The seal was spotted having a blast at Fisherman’s Wharf in Monterey, California – an area of the US home to many harbour seals. Keen snapper Veronica Craft admits she loves seals because of their jolly nature. This happy soul, which she has nicknamed “LOL” was more than happy to play up for the camera providing much amusement for her friends and family. (Photo by Veronica Craft/Caters News) 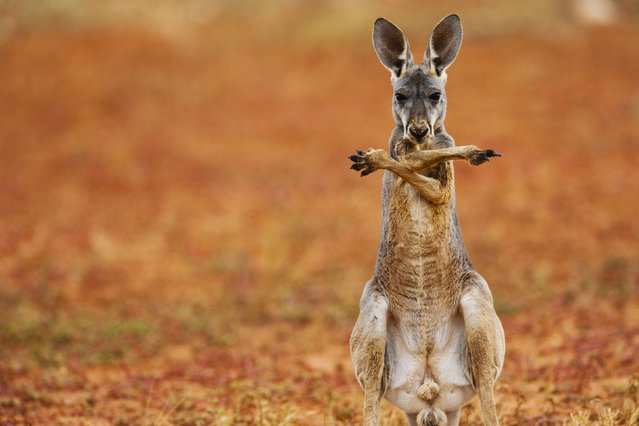 Real life Roo-d Boy – this incredible photo captures a gangster kangaroo posing like a pro for the camera. This must be the worlds coolest Kangaroo – the amazing marsupial crosses his arms with attitude for this stunning shot. The roo-diculous picture was taken in Sturf Stony Desert in New South Wales, Australia. Giant Red Kangaroos are notoriously shy and are only found in the wilds of the Australian outback – but this fella is bustin some moves for the camera. Photographer Jami Tarris spent four months and sat like a frozen statue - not moving a muscle for several hours - to get this shot. The 57-year-old from Santa Fe, New Mexico, U.S.A, works as a photographer full time and is never happier than when hes snapping roos deep in the bush. (Photo by Jami Tarris/Caters News) 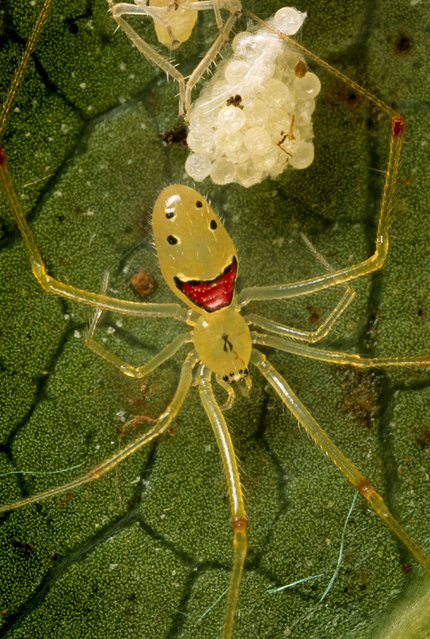 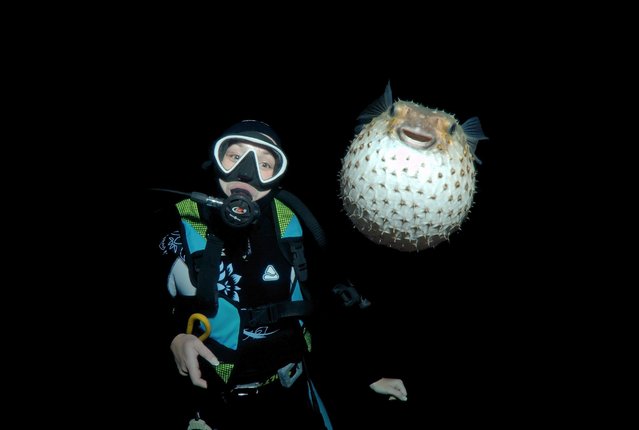 Underwater photobomb: porcupine fish steals the show. One evening in November, photographer Andrey Nekrasov was on a dive looking for nocturnal wildlife, near Sharm al-Sheik in the Red Sea, off the coast of Egypt. The group was at a depth of about 26 feet (8 meters) when this startled specimen – a porcupine fish – joined the party. Robert Robins, a senior biologist at the Division of Ichthyology at the Florida Museum of Natural History, identified the fish as a member of the “diodontid” family, and a relative of the family known as pufferfish. (Photo by Andrey Nekrasov/Barcroft Media) 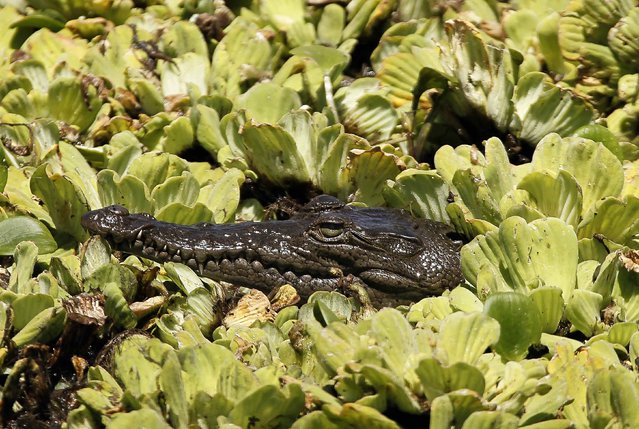 A photograph dated 10 March 2014 shows an alligator at National Park Palo Verde located in Guanacaste municipality, Costa Rica. Environment experts said on 18 March 2014 that it is neccesary to look for more effective and innovative solutions for conserving protected wild areas, which are in danger in Mesoamerica area. (Photo by Jeffrey Arguedas/EPA) 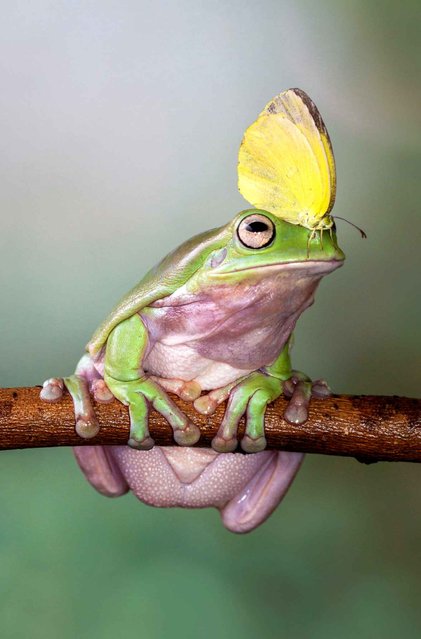 Funny encounter between the frog and butterfly. (Photo by Lessy Sebastian/Solent News/SIPA Press) 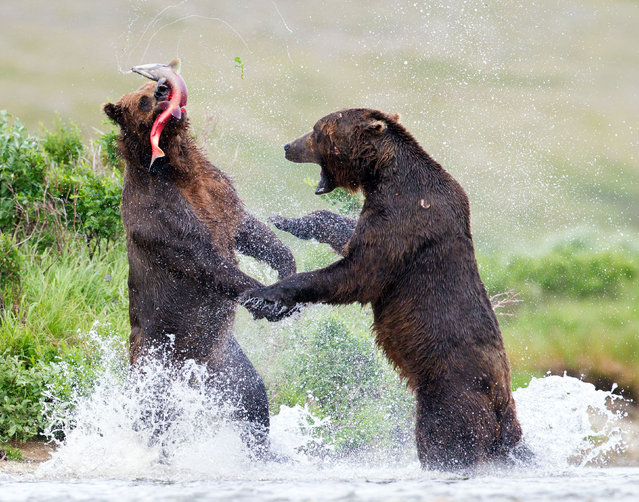 This is the FUR-ocious moment two bears were caught making a splash as they fought over dinner. The GRIZZLY situation unfolded after one of the bears managed to a catch a tasty salmon as the other had struggled to catch anything at all. The jealous empty-pawed mammal appeared to decide it would be a good idea to grab its grub from a nearby rival. But the defending bear would not give its slippery snack away quite so easily and the two began a fearsome fight over the fresh water fish. (Photo by Tin Man Lee/Caters News) 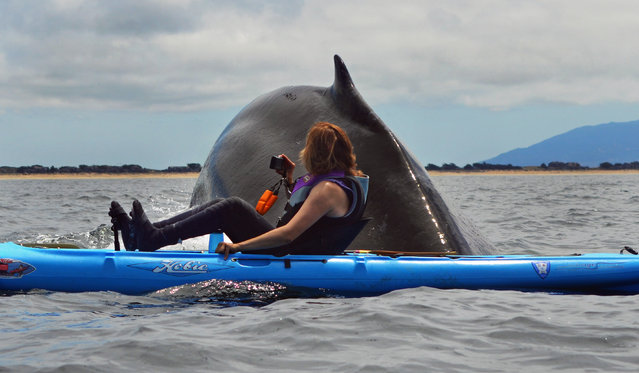 This is the heart-stopping moment a gigantic whale sprung to the surface of the water just feet away from stunned kayakers. Casually minding their own business the kayakers were paddling along trying to spot whales in the distance at Monterey Bay in California, USA. But suddenly the 40ft, 80,000lb beast rose out of the water almost within touching distance of the shocked pair who couldnt believe their eyes as the once-in-a-lifetime scene unfolded. Laws state that nobody can approach a whale within 100 yards of them but the mammoth mammal decided to take them by surprise instead. The incredible moment was captured by Giancarlo Thomae, a marine biologist from Moss Landing in California. (Photo by Giancarlo Thomae/Caters News) 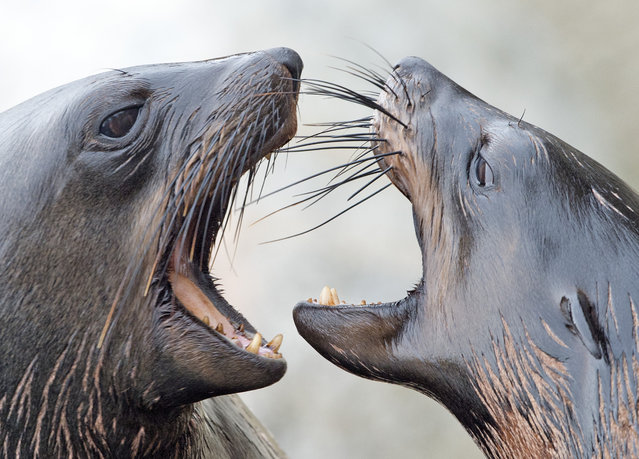 Sout African sea bears play together in their compund at the zoo in Leipzig, Germany, Wednesday, March 5, 2014. (Photo by Jens Meyer/AP Photo) 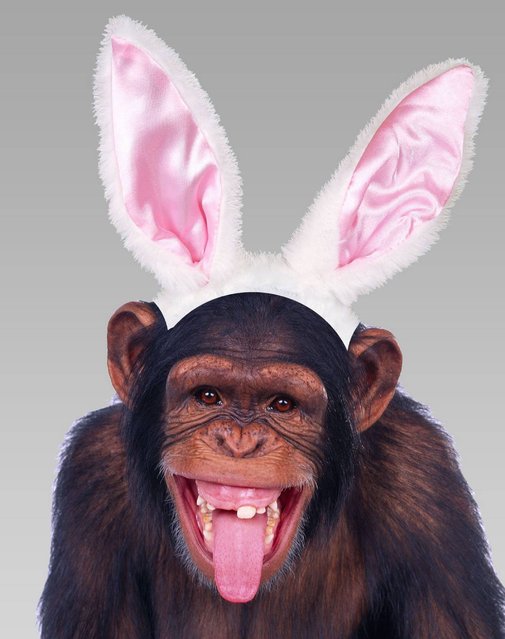 “The most ridiculous calls to the RSPCA ” – someone who thought they had seen a monkey in a rabbit suit and wanted the RSPCA to investigate. (Photo by The Independent) 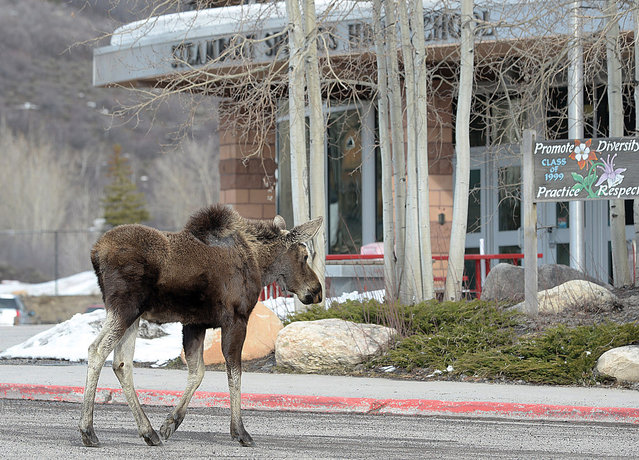 In this photo taken April 1, 2014, a young moose walks past the entrance to the Steamboat Springs High School in Steamboat Springs, Colo. It was the second day in a row that the moose, and another, have visited the high school looking for something to eat, and drawing the attention of passing motorist and local residents. (Photo by John F. Russell/AP Photo/Steamboat Pilot & Today) 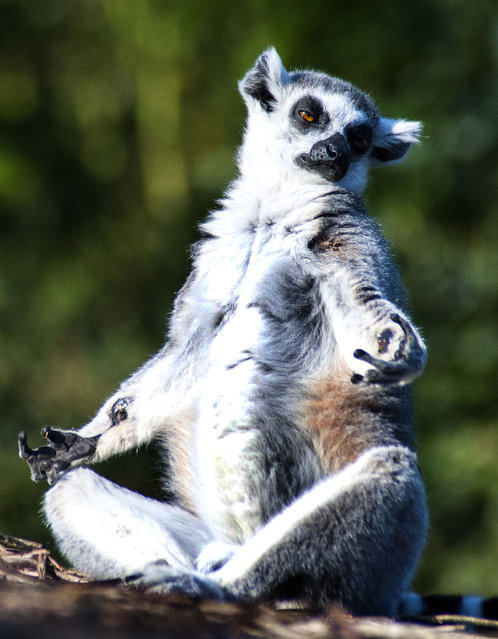 This lemur looks like he is channelling the spirit of Buddha – as he sits meditating. Sitting with his legs crossed, the lemur clasps his thumb and fore finger together with outstretched arms – just like the spiritual teacher. And amateur snapper Sebastien Degardin, 32, was on hand to capture the bizarre moment the animal searched for enlightenment on film. Sebastien, who moved from his native Belgium to Finchley, North London, said: I was gobsmacked when I saw this lemur meditating. (Photo by Sebastien Degardin/Caters News) 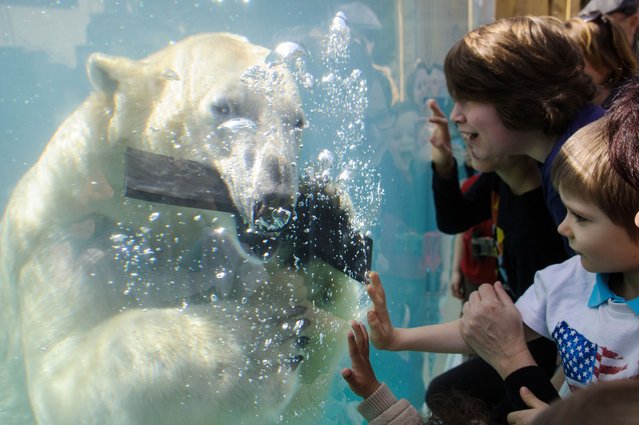 People look at a polar bear during the opening day of the new polar area at the zoo of Mulhouse on April 2, 2014. (Photo by Sebastien Bozon/AFP Photo) 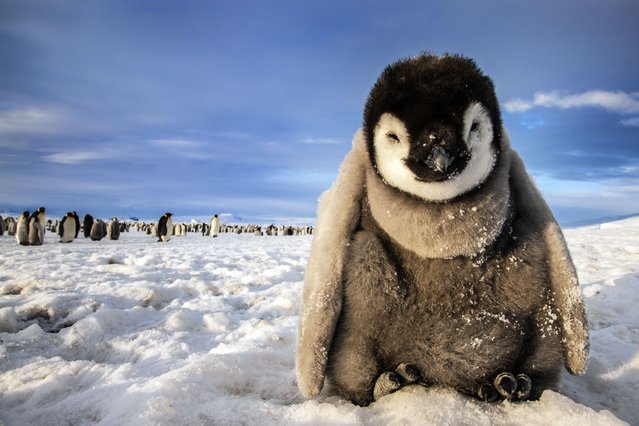 The cute emperor penguin in Antarctica. (Photo by Caters News) 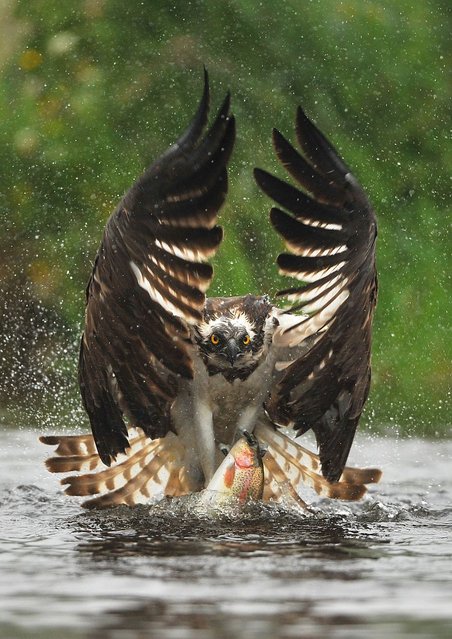 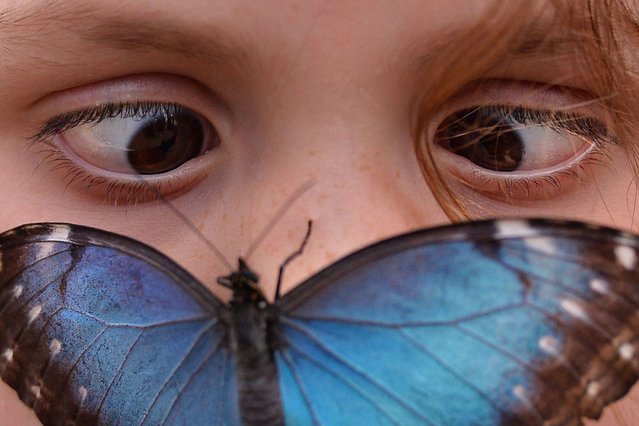 A Morpho peleides butterfly sits on the nose of a child during a photocall in the Natural History Museum's “Sensational Butterflies” outdoor butterfly house in London on March 31, 2014. (Photo by Ben Stansall/AFP Photo) 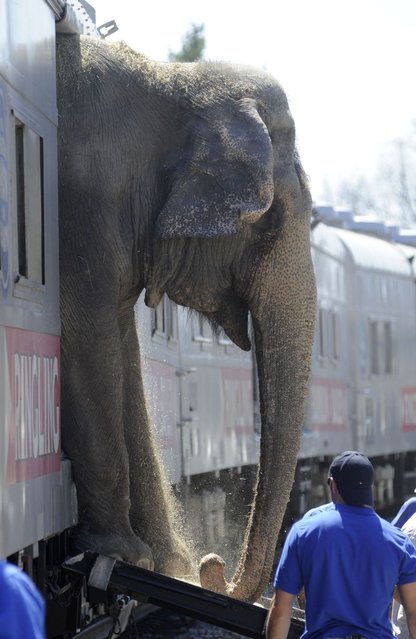 Five elephants from Ringling Bros. and Barnum and Bailey: Legends Circus are led from the Huntsville railroad depot through downtown. (Photo by AL.com/Landov/Barcroft Media) 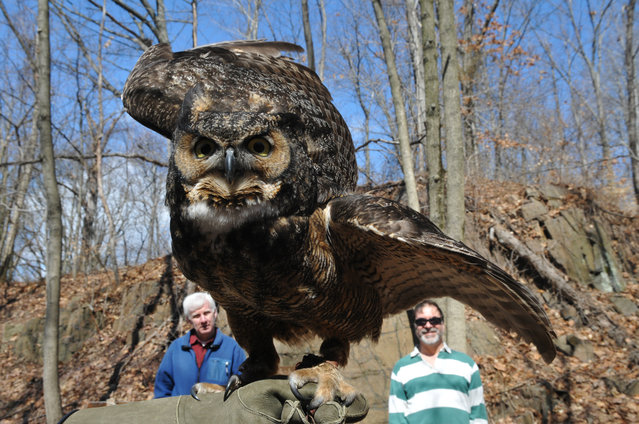 Flatrockbrook Nature Center education director, Jill Bennetta, shows off the new Great Horned Owl that came to the aviary as a gift Thursday March 20, 2014. It is a rescued owl from Seattle, WA. The owls are also native to this area. Visitors looking on are Don McNeil of Bergenfield and Egidio Durante from Ledgewood. (Photo by Don Smith/AP Photo/The Record of Bergen County) 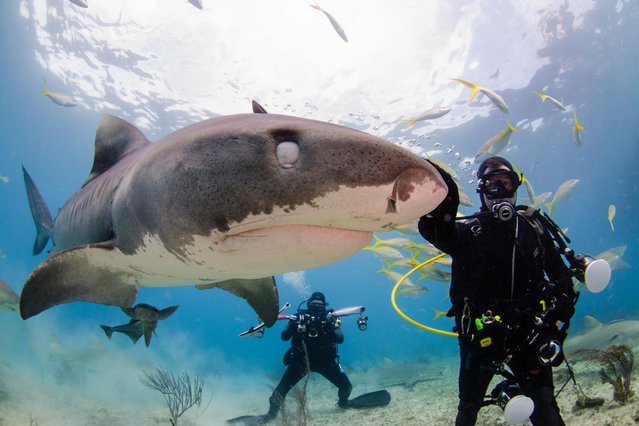 This is the fin-credible moment a cheeky shark photobombed a diver and flashed a toothy grin for the camera. (Photo by Caters News) 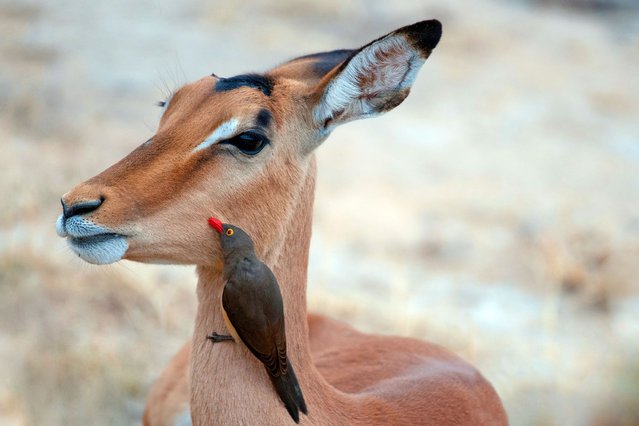 Everybodys got a mobile phone these days, and it seems this impatient impala wants to join in the trend. (Photo by Caters News) 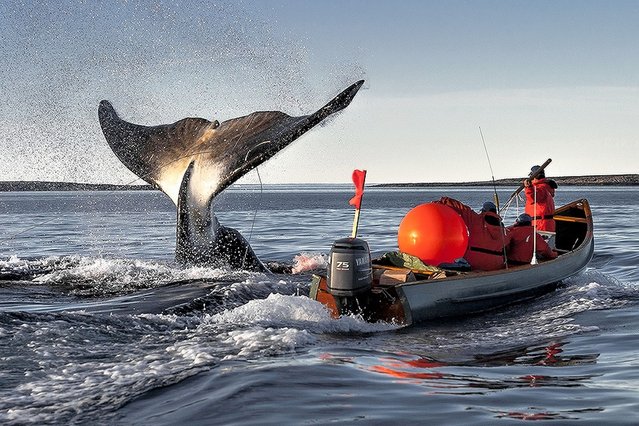 Giant tail emerges from the ocean within inches of a boat in Canada. (Photo by Sony World Photography Awards) 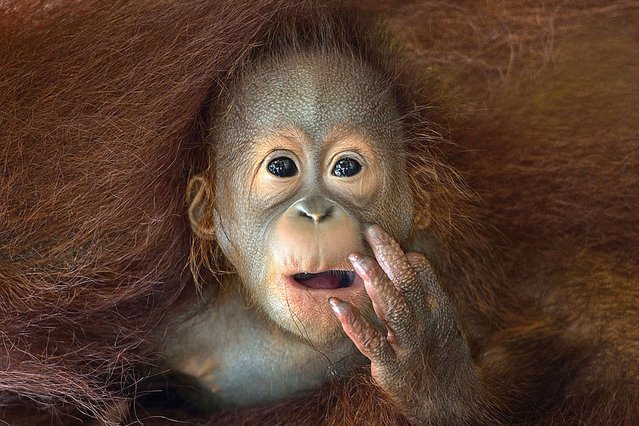