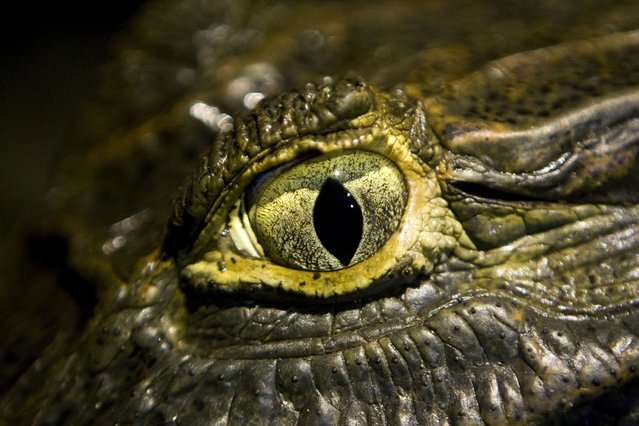 Image of the eye of a crocodile taken at the Camisea jungle in Cuzco, Peru on May 29, 2009. (Photo by Ernesto Benavides/AFP Photo) 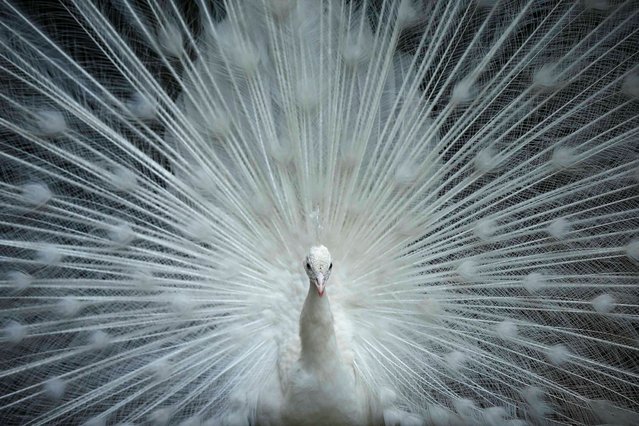 An Indian peafowl spreads its tail feathers at a zoo in Tbilisi. (Photo by David Mdzinarishvili/Reuters) 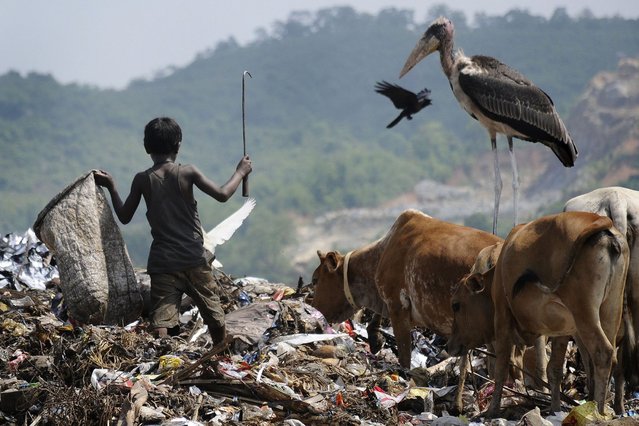 Greater adjutant storks look on as a young Indian rag picker stand in a garbage landfill at Boragoan in Guwahati on November 21, 2012. (Photo by Biju Boro/AFP Photo) 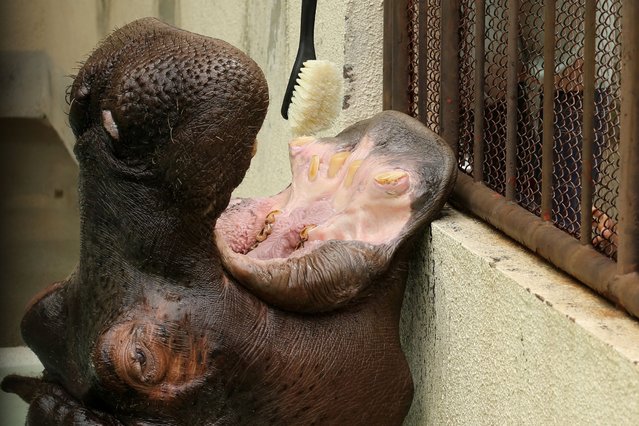 A zoo employee cleans the teeth of a 30 year old Hippopotamus named Kiboko at Himeji Zoo in Japan. (Photo by Buddhika Weerasinghe/Getty Images) 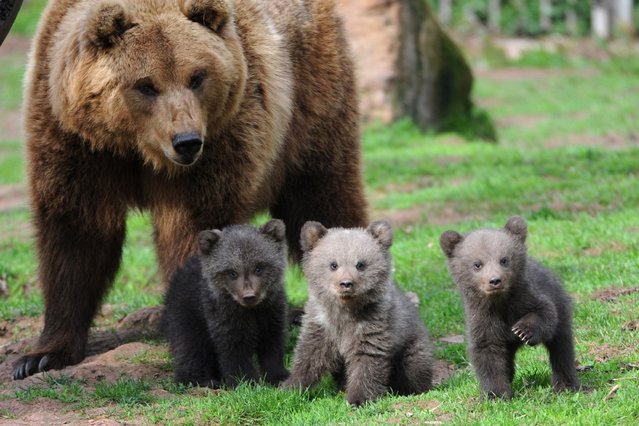 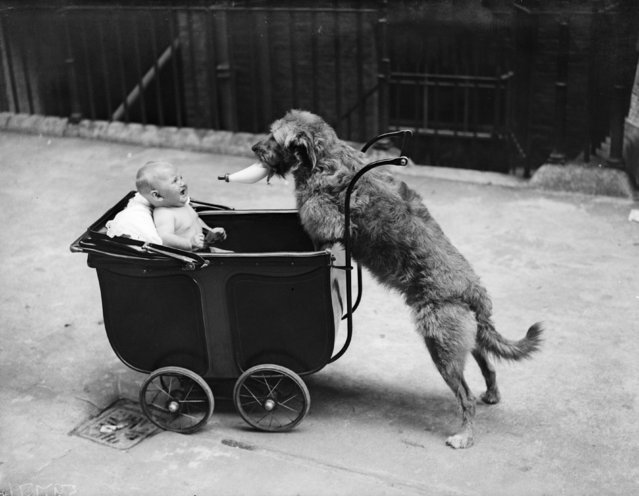 A doggie produces a milk bottle in an effort to stem the flood of tears from its charge, 14th July 1932. (Photo by Fox Photos/Getty Images) 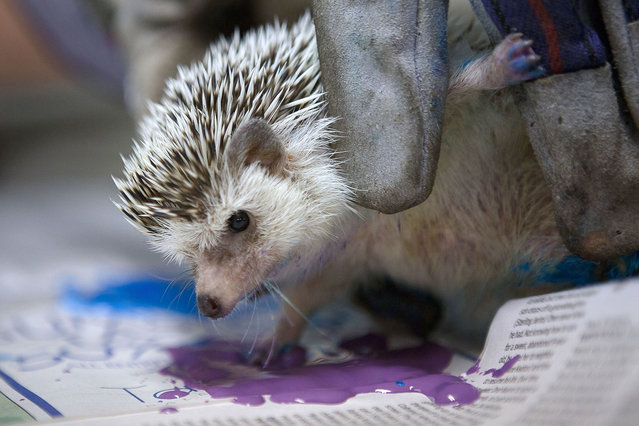 Sara Travis, of Wellington, dips Zuri the hedgehog's feet in paint at the Palm Beach Zoo and Conservation Society on Wednesday, August 20, 2014 in West Palm Beach. The paintings are sold through a program called Art Gone Wild and the proceeds go towards taking care of the zoo animals. (Photo by The Palm Beach Post/ZUMA Press) 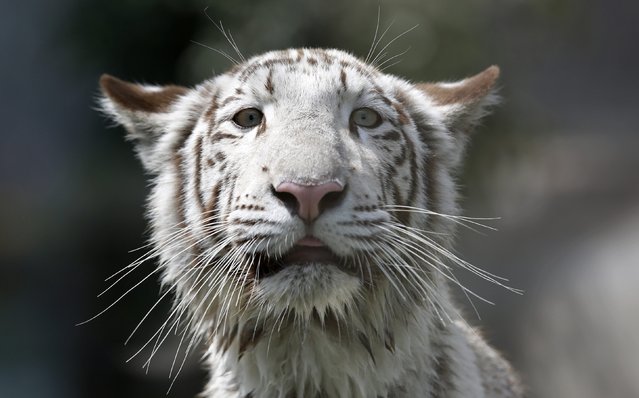 Civa Sumac, a white Bengal tiger, stands in her new enclosure during a media presentation at Huachipa's private zoo in Lima April 3, 2014. The nine-month-old tiger was born at the zoo and is the first white Bengal tiger in Peru born in captivity. (Photo by Mariana Bazo/Reuters) 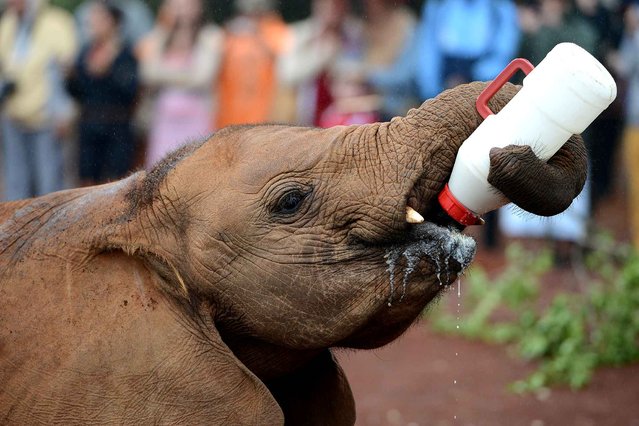 An orphaned baby elephant feeds itself on August 12, 2014, during the World elephant day, at the David Sheldrick Elephant Orphanage, at the Nairobi National Park, in Nairobi. Africa's elephants are under extreme threat from poaching, ivory trafficking, human-elephant conflict, and habitat loss. (Photo by Simon Maina/AFP Photo) 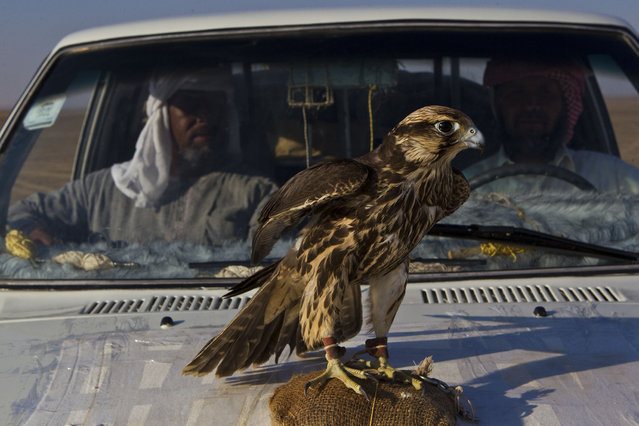 A raptor is tethered to the hood of a truck, serving as a trapper’s spotter in Egypt's Western Desert, October 1, 2012. When the bird spies a falcon, it looks up, alerting the trapper to release a small bird wearing a snare, trapping the falcon if it comes in for the kill. Falconers pay up to $35,000 for a live falcon. (Photo by David Guttenfelder/AP Photo/National Geographic Magazine) 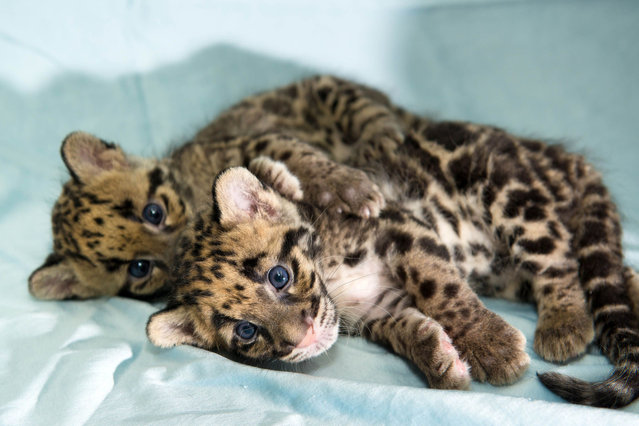 Pictured is the adorable pair of cubs, Kashi and Senja. This pair of adorable baby-blue eyed clouded leopard cubs have posed for some real P-AWW-traits with their cute first pictures. The darling duo were born at Houston Zoo, Texas, USA, earlier this year but are being shown for the first time. The cubs are a result of the first pregnancy for two-year-old Suksn, who gave birth in a private den off-exhibit. This is also the first offspring for the cubs father, Tarak, also aged two. (Photo by Stephanie Adams/Caters News) 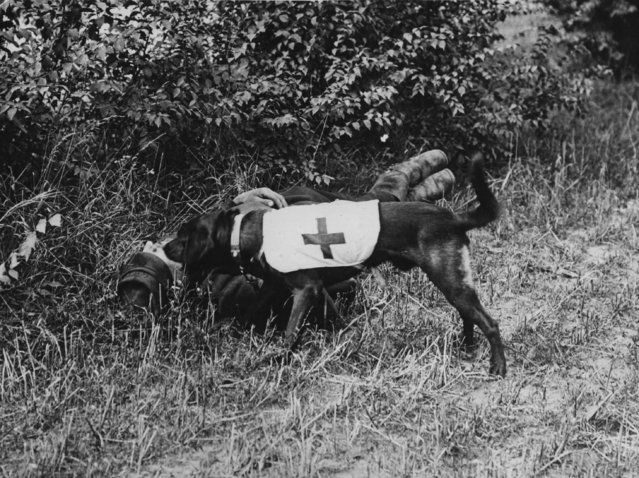 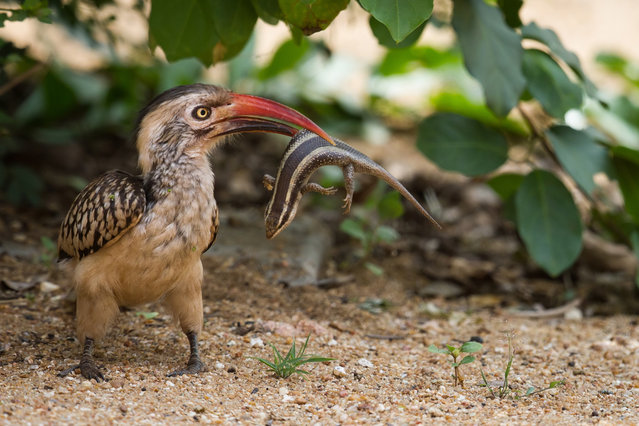 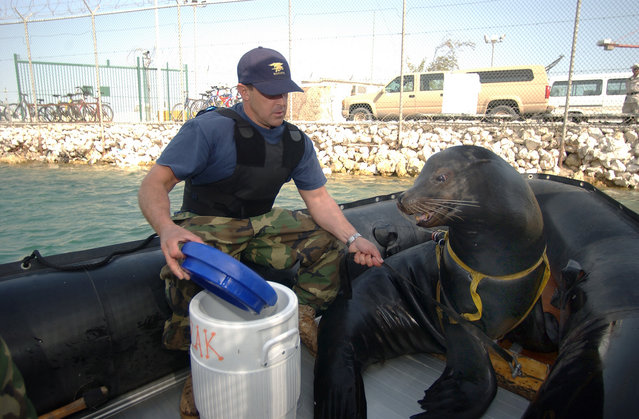 A U.S. Navy SEAL (Sea, Air, and Land) feeds chum to Zak, a 375-pound California sea lion, shows his teeth during one of many training swims taking place in the Central Command AOR, on January 29, 2003. Zak was participating in the Space and Naval Warfare Systems Center's, Shallow Water Intruder Detection System (SWIDS) program. Zak has been trained to locate swimmers near piers, ships, and other objects in the water considered suspicious and a possible threat to military forces in the area. SWIDS program has been deployed as part of the continued effort to support missions under Operation Enduring Freedom. (Photo by Mate First Class Brien Aho/U.S. Navy/Central Command AOR) 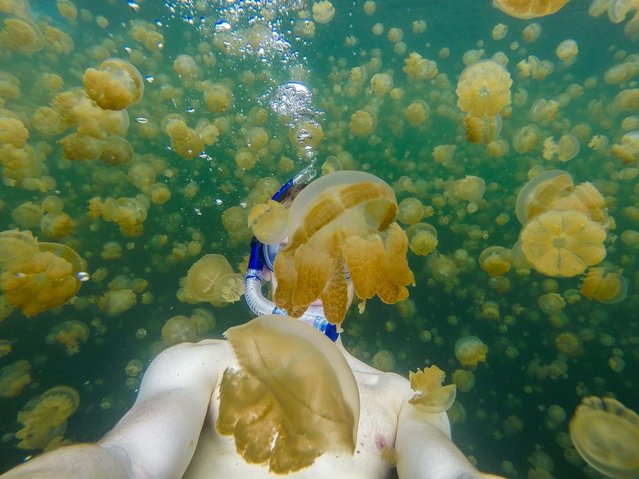 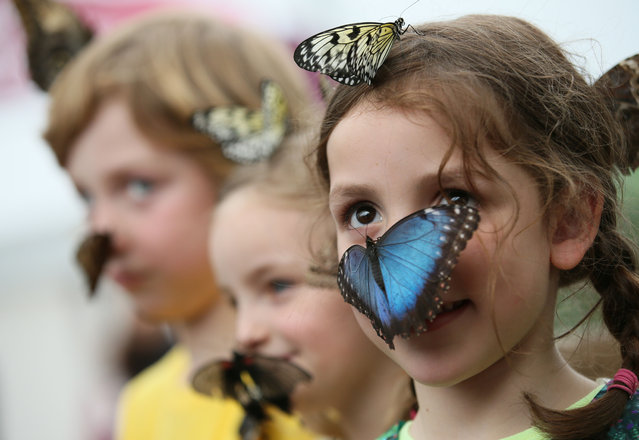 Isla Roberts looks at photographers as a large blue Morpho butterfly lands on her face, as she and other children take part in a media call for a new exhibition on tropical butterflies in a temporary venue outside the Natural History Museum Monday, March, 31, 2014. (Photo by Alastair Grant/AP Photo) 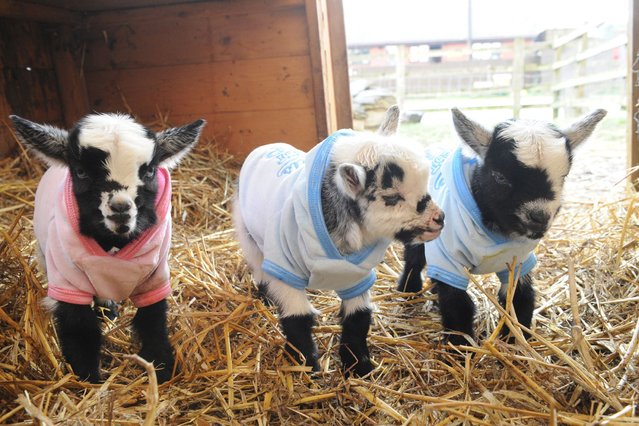 These week-old pygmy goats have been snuggling up in their own jumpers – after becoming Internet sensations. (Photo by Caters News) 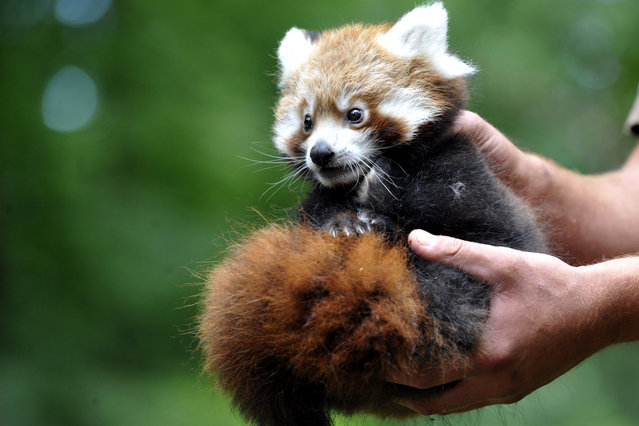 The first red panda cub was born on May 30 in zoo Zlin. Zoologist Roman Vrzal holds a male of red panda. The Red panda is pictured in Zlin, Czech Republic, August 20, 2014. (Photo by Dalibor Gluck/CTK) 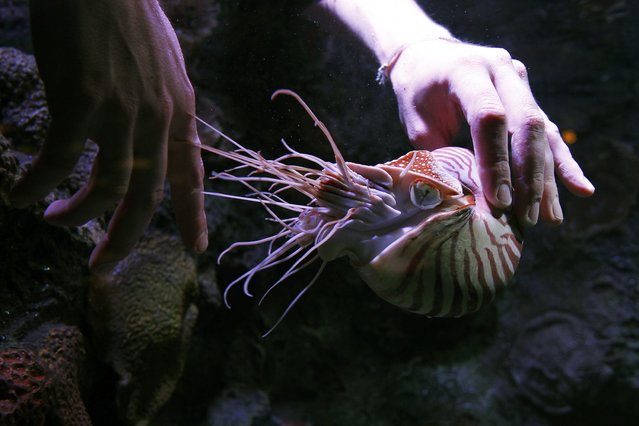 Aquarist Bret Grasse feeds a Chambered nautilus in preparation for the upcoming “Tentacles: The Astounding Lives of Octopuses, Squid and Cuttlefishes” exhibition at the Monterey Bay Aquarium in Monterey, California. (Photo by Michael Fiala/Reuters) 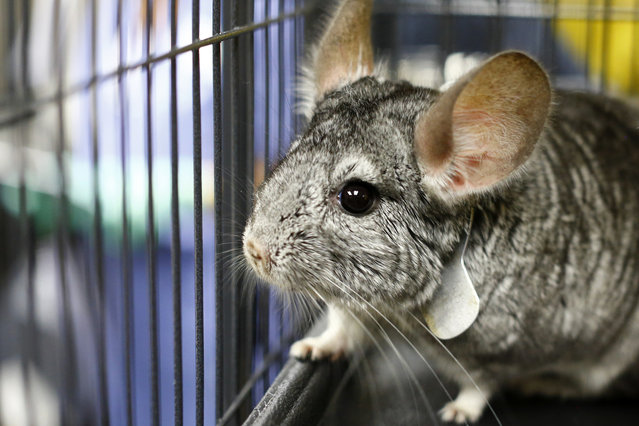 A rescued chinchilla looks out from his new home at the San Diego Humane Society in Oceanside, California after Hollywood mogul and co-creator of The Simpsons, Sam Simon, financed the purchase of a chinchilla farm in order to rescue over 400 chinchillas and close the Vista, California business August 19, 2014. In what all parties described as a “win-win” deal, 90-year-old owner Lurlie Adams was able to offload the farm she did not want any more to Simon for $50,000. And the 425 chinchillas were moved to much larger cages while awaiting adoption. (Photo by Mike Blake/Reuters) 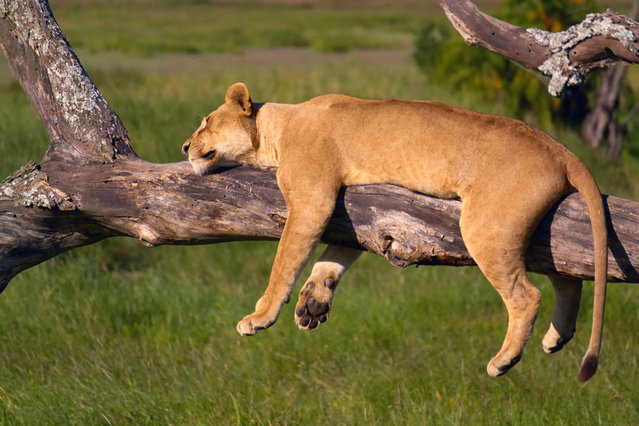 A lioness lets it all hang loose – as she catches 40 winks on a tree branch. The shattered female takes the opportunity to relax in the late evening sun, lying down on her front. Photographer Petr Banny was on hand to capture her amusing pose with all four limbs hanging down from the tree. (Photo by Petr Banny/Solent News/SIPA Press)
Edit Del
25 Aug 2014 11:08:00, post received 0 comments
Publication archive:
←   →
Popular tags:
All tags
Last searches: