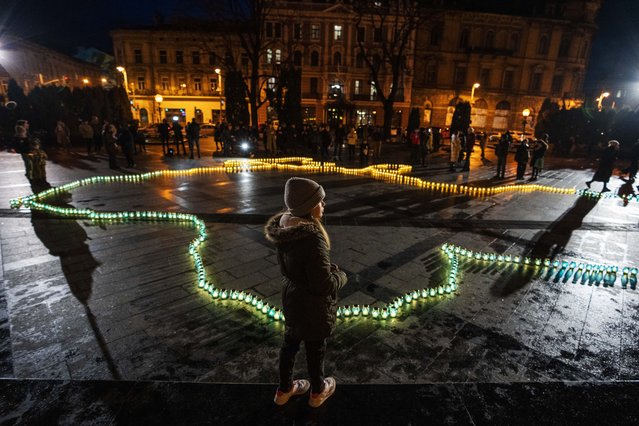 A girl stands in front of lit candles forming the shape of Ukraine's map, in memory of lost lives, in front of the Taras Shevchenko monument, in Lviv, western Ukraine, late Tuesday, April 5, 2022. (Photo by Nariman El-Mofty/AP Photo) 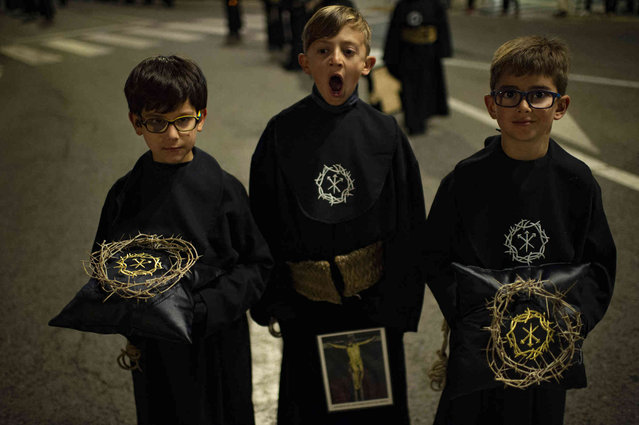 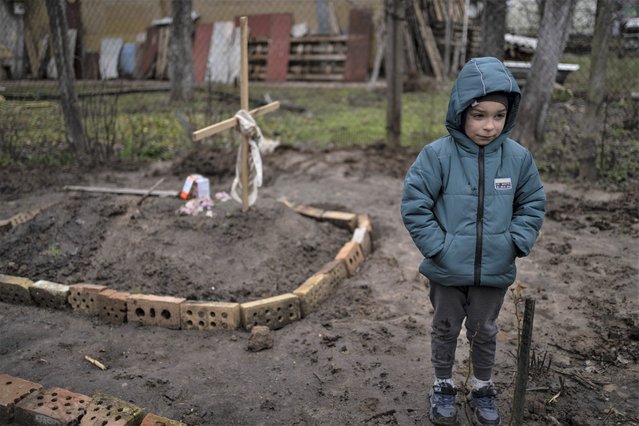 In the courtyard of their house, Vlad Tanyuk, 6, stands near the grave of his mother Ira Tanyuk, who died because of starvation and stress due to the war, on the outskirts of Kyiv, Ukraine, Monday, April 4, 2022. (Photo by Rodrigo Abd/AP Photo) 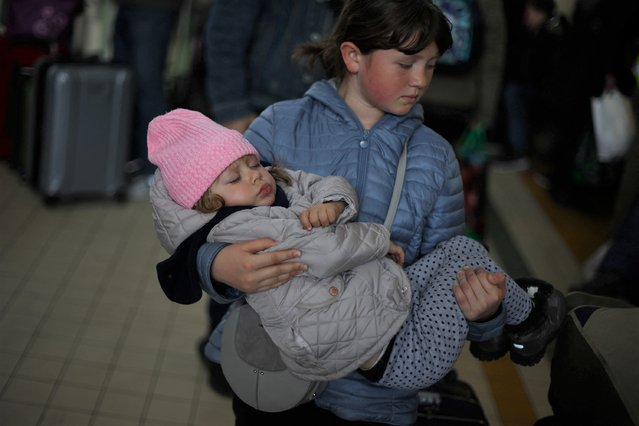 Ukrainian refugees Tania, 2, and Galina, 11, wait in the ticket hall at Przemysl Glowny train station, after fleeing the Russian invasion of Ukraine, in Poland, April 4, 2022. (Photo by Kacper Pempel/Reuters) 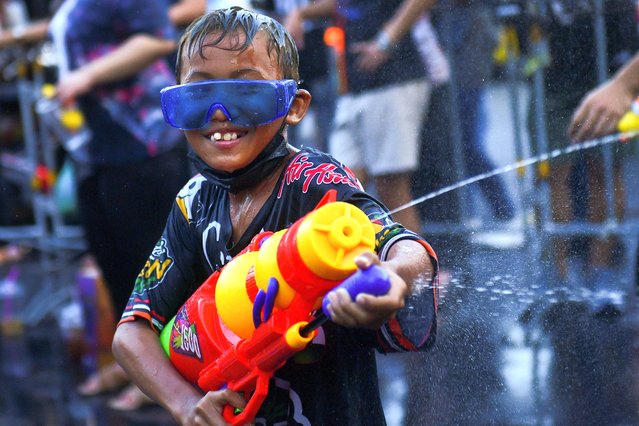 A boy plays with water as he celebrates during the Songkran holiday which marks the Thai New Year during the coronavirus disease (COVID-19) outbreak, in Bangkok, Thailand, April 13, 2022. (Photo by Chalinee Thirasupa/Reuters) 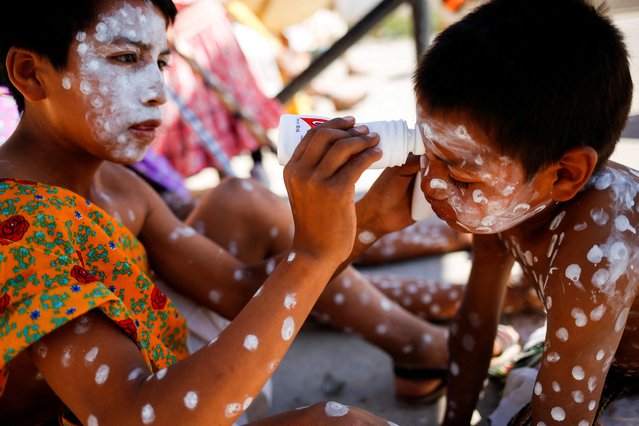 Saul, 11, paints the face of Santiago, 4, as they take part in Good Friday celebrations in the Tarahumara neighborhood of Ciudad Juarez, Mexico on April 15, 2022. (Photo by Jose Luis Gonzalez/Reuters) 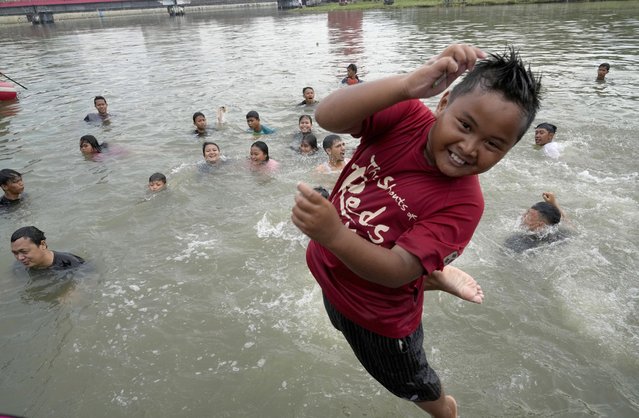 People bathe in the Cisadane River on the first evening of the holy fasting month of Ramadan in Tangerang, Indonesia, Saturday, April 2, 2022. Muslims followed local tradition to wash in the river to symbolically cleanse their soul prior to entering the holiest month in Islamic calendar. (Photo by Tatan Syuflana/AP Photo) 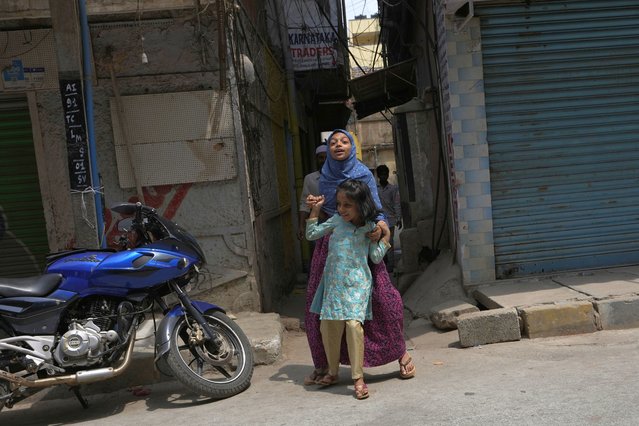 A Muslim girl wearing hijab plays with a younger girl next to closed shops run by Muslims during a day long general strike called by Karnataka state's Muslim chief priest to protest against the court verdict that upheld the ban on wearing hijab in schools, in Bengaluru, Thursday, March 17, 2022. An Indian court ruling upholding a ban on Muslim students wearing head coverings in schools has sparked criticism from constitutional scholars and rights advocates amid concerns of judicial overreach regarding religious freedoms. (Photo by Aijaz Rahi/AP Photo) 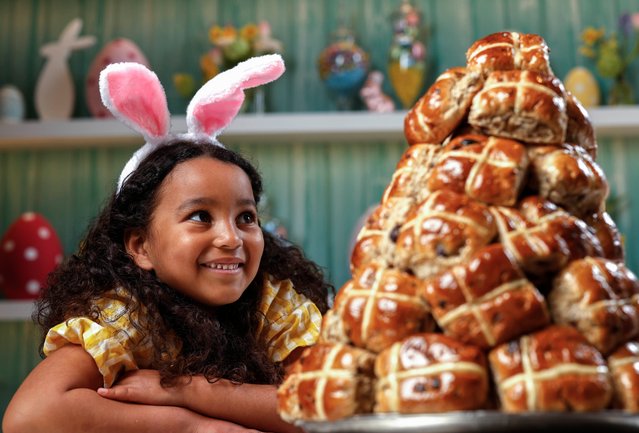 The launch of the Tesco hot cross bun cafe on April 5, 2022, a dining experience in central London centered around Hot Cross Buns, open from Tuesday until Easter Sunday with all proceeds going to the supermarket's charity partner, the Trussell Trust. (Photo by David Parry/PA Images via Getty Images) 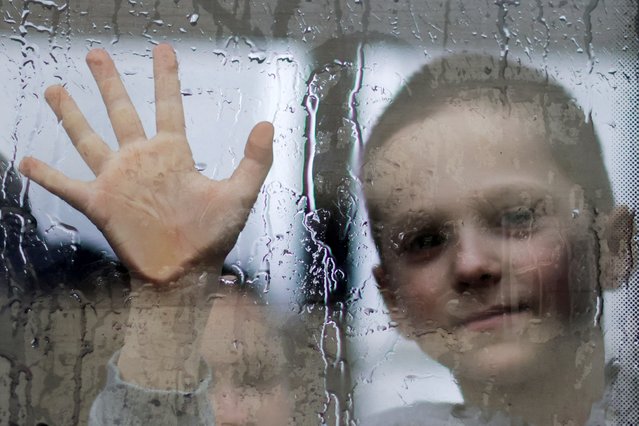 A Ukrainian boy waves out of a window to say goodbye to his father as he flees the Russian invasion of Ukraine, in front of a complex, set up as a shelter organised by volunteers, in Zaporizhzhya, Ukraine, April 13, 2022. (Photo by Ueslei Marcelino/Reuters) 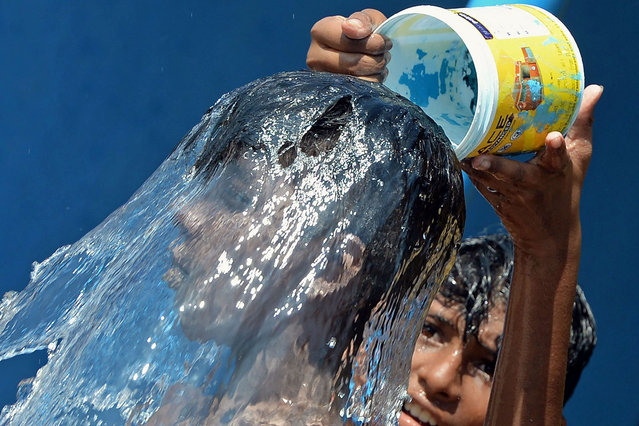 Boys cool off on a hot summer day in Chennai on April 7, 2022. (Photo by Arun Sankar/AFP Photo) 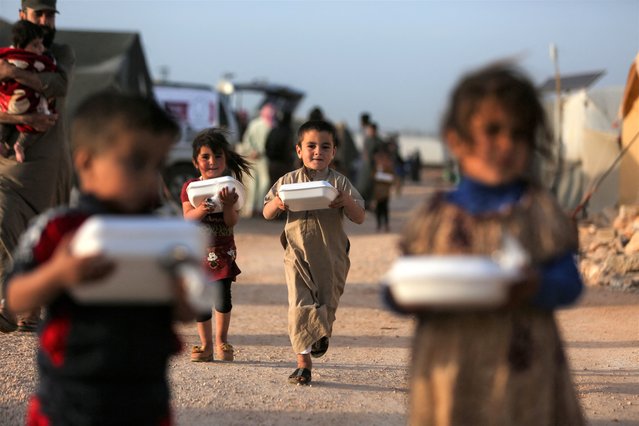 Displaced Syrian children return to their tents with boxes of food distributed by a local charity organisation, before the 'Iftar' meal during the Muslim holy month of Ramadan, at a camp for displaced people on the outskirts of the rebel-held town of Dana, east of the Turkish-Syrian border in the northwestern Idlib province, on April 3, 2022. (Photo by Aaref Watad/AFP) 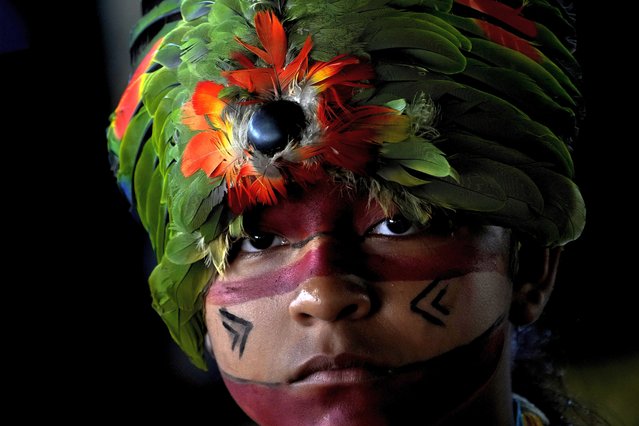 A Pataxo Indigenous girl attends a ceremony called the Meeting of the First Peoples at the 18th annual Free Land Indigenous Camp in Brasilia, Brazil, Friday, April 8, 2022. The 10-day event aims to show the unity of Brazil's Indigenous peoples in their fight for the demarcation of their lands and their rights. (Photo by Eraldo Peres/AP Photo) 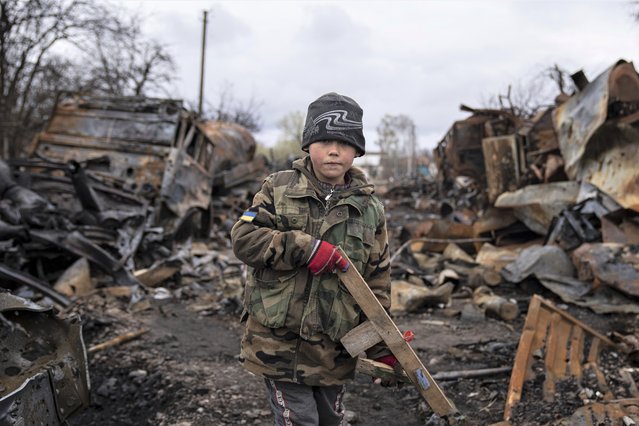 Yehor, 7, stands holding a wooden toy rifle next to destroyed Russian military vehicles near Chernihiv, Ukraine, Sunday, April 17, 2022. Witnesses said multiple explosions believed to be caused by missiles struck the western Ukrainian city of Lviv early Monday as the country was bracing for an all-out Russian assault in the east. (Photo by Evgeniy Maloletka/AP Photo) 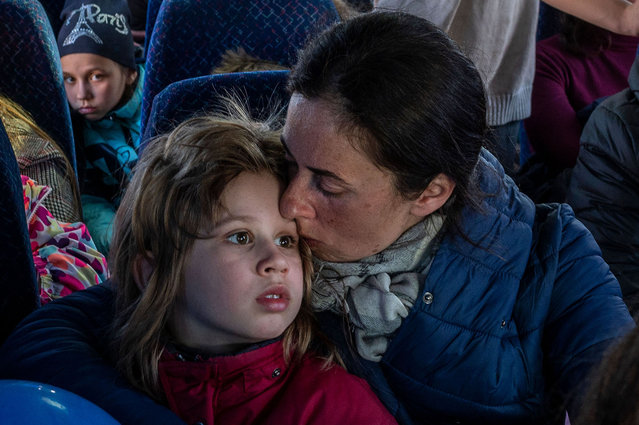 Ukrainian evacuees stand on a bus carrying refugees after crossing the Ukrainian border with Poland at the Medyka border crossing, southeastern Poland, on March 28, 2022, following the Russian military invasion of Ukraine. More than 3,8 million people have fled Ukraine since Russia's invasion a month ago, UN figures showed on March 28, but the flow of refugees has slowed down markedly. (Photo by Angelos Tzortzinis/AFP Photo) 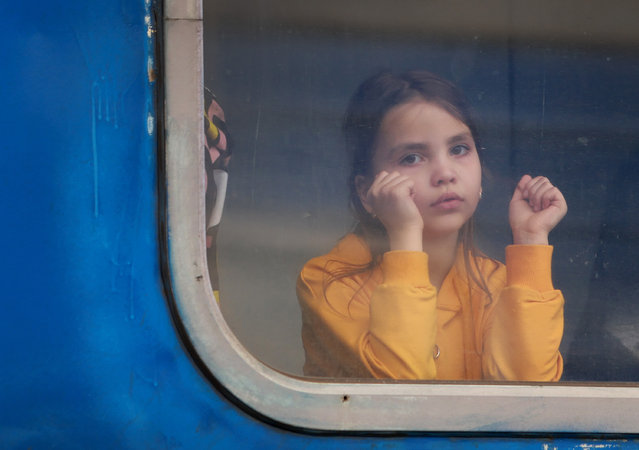 A child waits on the train to Poland at the central train station on April 11, 2022 in Lviv, Ukraine. Many people are heading west as Russia's military is anticipated to conduct renewed attacks in the east. Lviv has served as a stopover and shelter for the millions of Ukrainians fleeing the Russian invasion, either to the safety of nearby countries or the relative security of western Ukraine. (Photo by Joe Raedle/Getty Images) 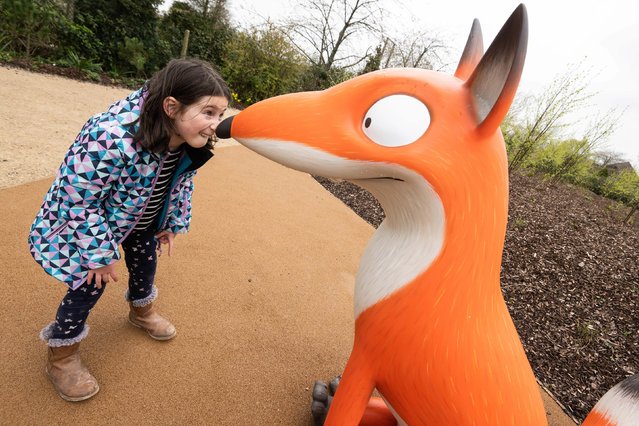 Member of Twycross Zoo, Lily-Jean Morales, seven, visits The Gruffalo Discovery Land, a brand-new four-acre experience at Twycross Zoo, in Leicestershire on April 7, 2022, before it opens to the public on Saturday. (Photo by PA Wire Press Association) 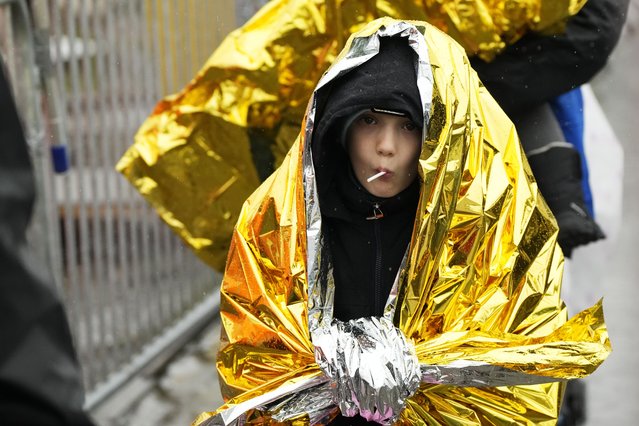 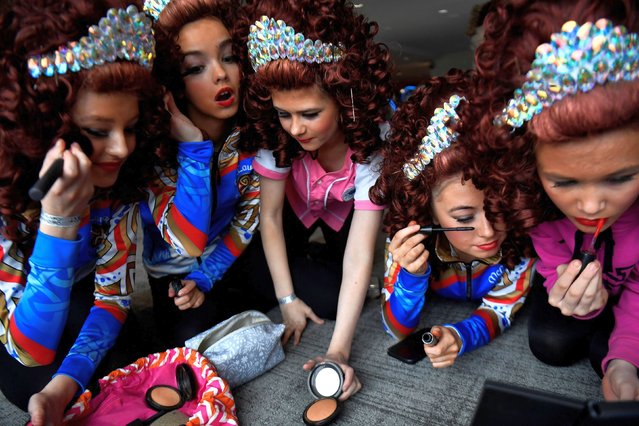 Dancers from the McLoughlin school in Glasgow, Scotland put on make-up as they get ready to participate in the 2022 World Irish Dancing Championships on its 50th anniversary, in Belfast, Northern Ireland on April 14, 2022. (Photo by Clodagh Kilcoyne/Reuters)
Edit Del
05 May 2022 05:27:00, post received 0 comments
Publication archive:
←   →
Popular tags:
All tags
Last searches: