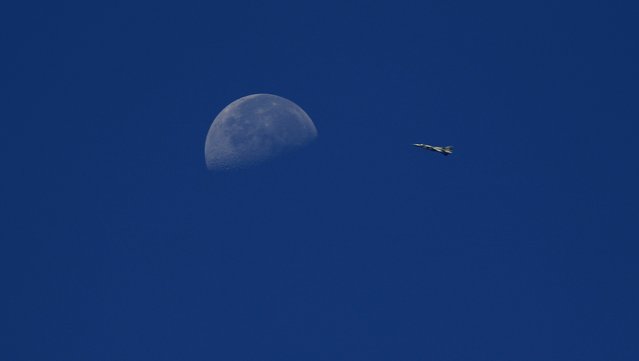 A fighter jet belonging to forces of Syria's President Bashar al-Assad flies in the sky, as the moon is seen in the background, from the town of Morek in Hama province July 18, 2014. (Photo by Rasem Ghareeb/Reuters) 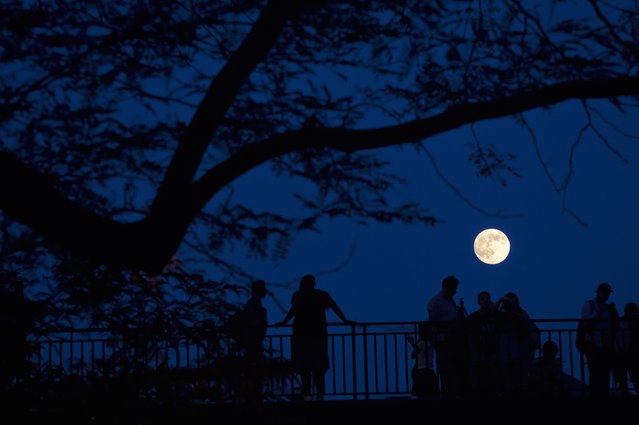 People stand and look at the Supermoon phenomenon from a bridge over 42nd St. in the Manhattan borough of New York July 11, 2014. Occurring when a full moon or new moon coincides with the closest approach the moon makes to the Earth, the Supermoon results in a larger-than-usual appearance of the lunar disk. (Photo by Carlo Allegri/Reuters) 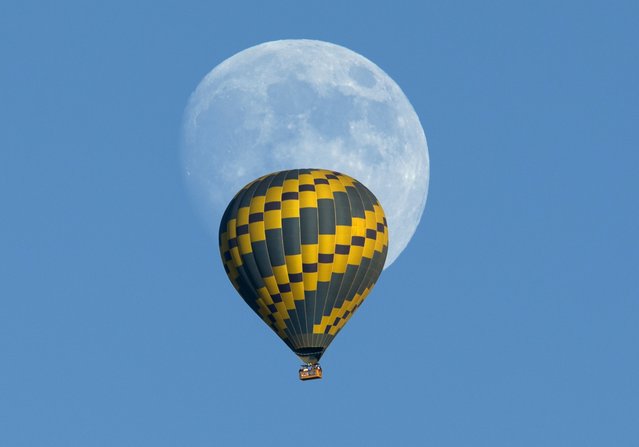 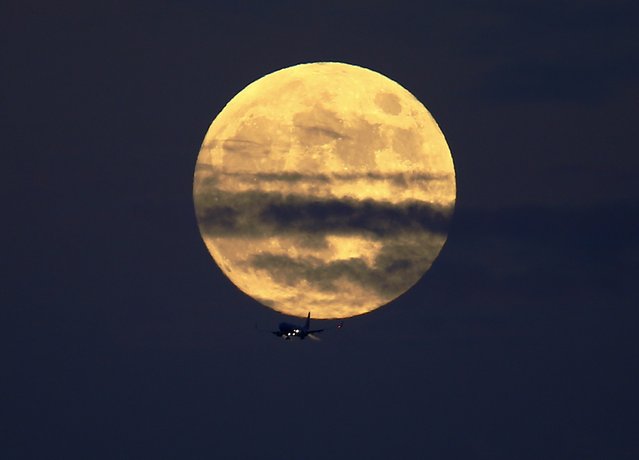 A commercial airliner crosses the path of a rising full moon as it comes in to land at Lindberg Field in San Diego, California October 7, 2014. (Photo by Mike Blake/Reuters) 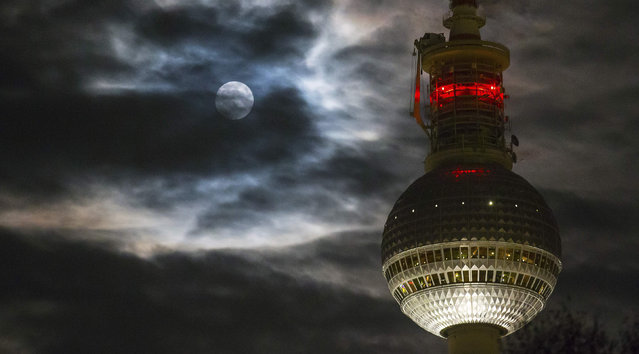 The television tower is pictured against the backdrop of clouds and the moon in Berlin November 6, 2014. (Photo by Hannibal Hanschke/Reuters) 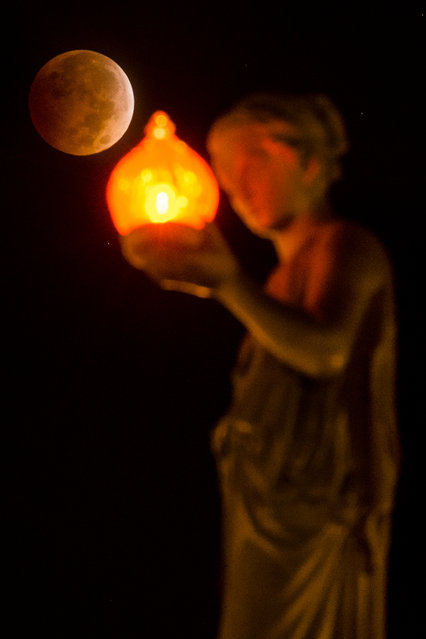 A lunar eclipse dips down behind the Wheeler Town Clock in Manitou Springs, Colo. early Wednesday, October 8, 2014. The moon appears orange or red, the result of sunlight scattering off Earth's atmosphere. This is known as the blood moon. (Photo by Michael Ciaglo/AP Photo/The Colorado Springs Gazette) 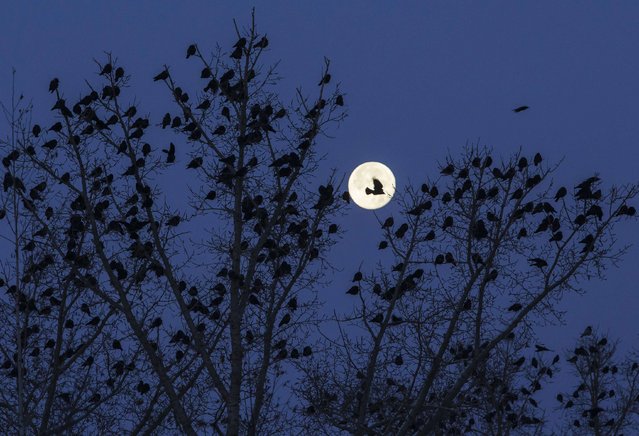 A flock of birds is seen on a tree against the moon in Kostanay, northern Kazakhstan, November 8, 2014. (Photo by Shamil Zhumatov/Reuters) 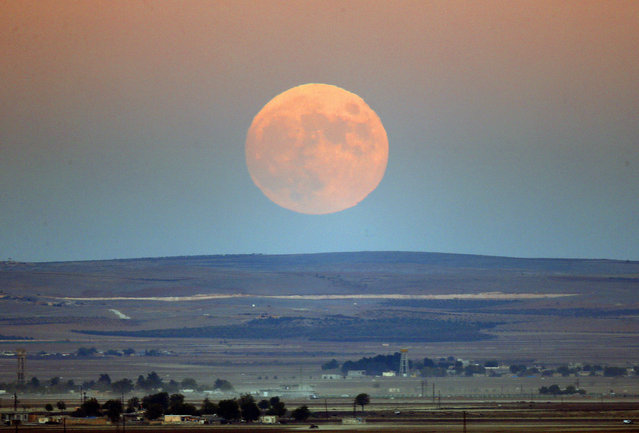 A full moon rises over the Turkish-Syrian border line close to the Syrian town of Kobani on November 6, 2014. (Photo by Yannis Behrakis/Reuters) 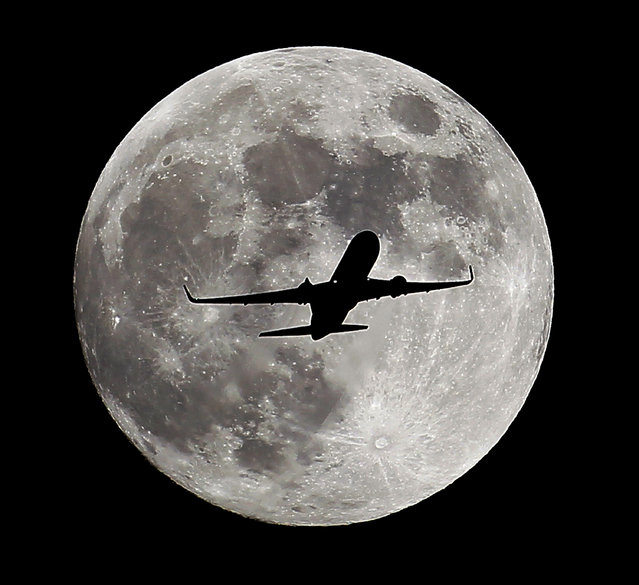 A passenger airliner crosses the full moon, also known as the Hunter's Moon, a few hours prior to the beginning of a total lunar eclipse that will create an effect known as the Blood Moon, in Whittier, Ca., on Tuesday evening, October 7, 2014. (Photo by Nick Ut/AP Photo) 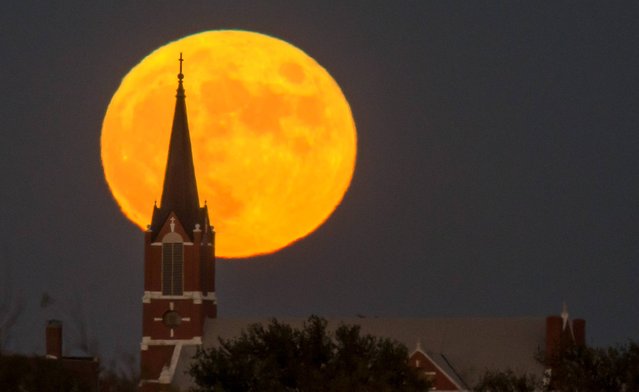 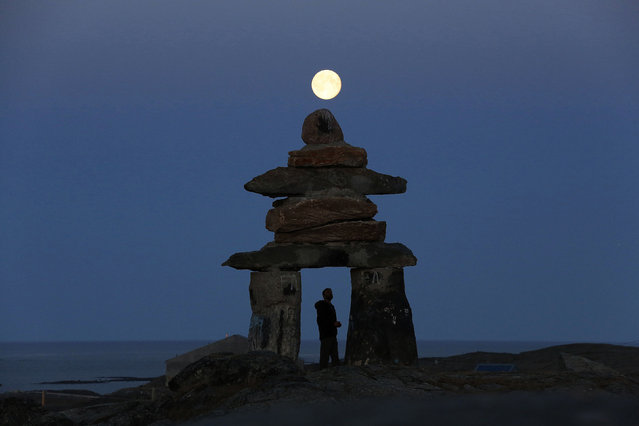 A man looks at a giant inukshuk as the moon rises above it in Rankin Inlet, Nunavut in this file photo from August 21, 2013. The inukshuk is a stone landmark or cairn used by the Inuit people in the arctic. Canada's Arctic territory of Nunavut has opened long-awaited talks with the federal government on gaining control of the region's vast natural resources, a move that could boost exploration and development. (Photo by Chris Wattie/Reuters)
Edit Del
09 Nov 2014 09:42:00, post received 0 comments
Publication archive:
←   →
Popular tags:
All tags
Last searches: