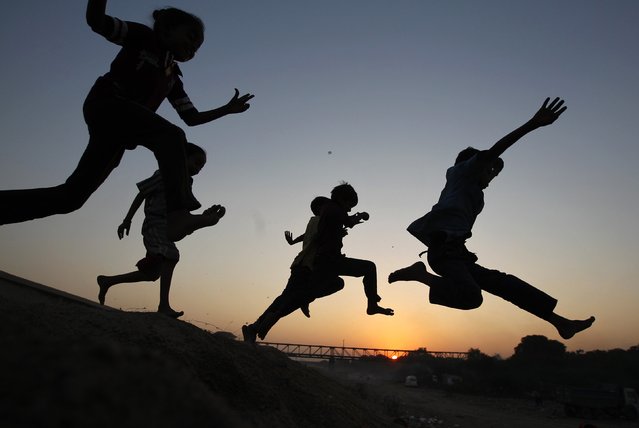 Children play on a sand dune as they are silhouetted against the setting sun in the western Indian city of Ahmedabad November 28, 2014. (Photo by Amit Dave/Reuters) 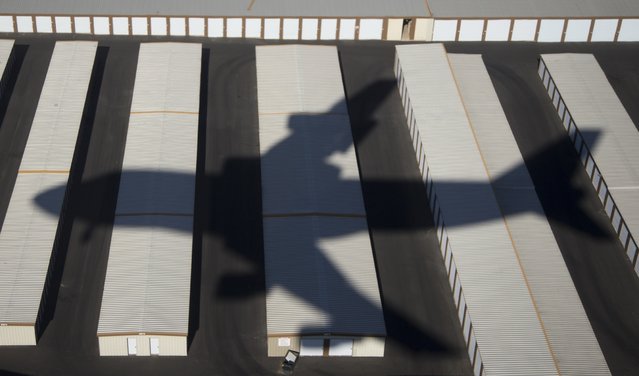 A shadow is cast by Air Force One, with President Barack Obama aboard, as it approaches McCarran International Airport in Las Vegas, Friday, November 21, 2014, as the president travels to Del Sol High School to speaks about the steps he will be taking on immigration. (Phhoto by Carolyn Kaster/AP Photo) 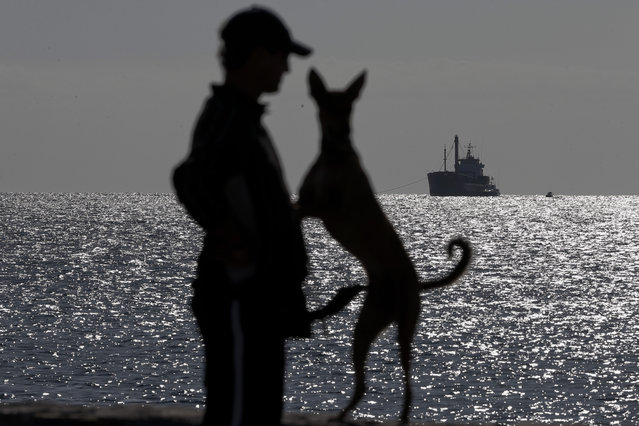 A local resident and a dog are silhouetted as a crippled freighter, left, carrying hundreds of refugees trying to migrate to Europe is towed by a Greek navy frigate at the coastal Cretan port of Ierapetra, Greece, on Thursday, November 27, 2014. A smuggling ship carrying more than 700 men, women and children that broke down in gale-force winds while trying to reach Europe was towed Thursday to the Greek island of Crete. (Photo by Petros Giannakouris/AP Photo) 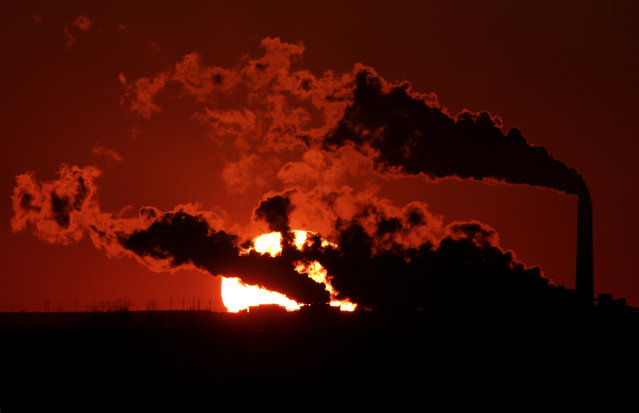 In this March 8, 2014 file photo, steam from the Jeffrey Energy Center coal-fired power plant is silhouetted against the setting sun near St. Mary's, Kan. A groundbreaking agreement struck Wednesday, November 12, 2014, by the United States and China puts the world's two worst polluters on a faster track to curbing the heat-trapping gases blamed for global warming. Energized by these new targets set by China and the United States, the world's top climate polluters, U.N. global warming talks resume December 1, 2014 in Peru, with unusual optimism despite evidence that human-generated climate change is already happening and bound to get worse. (Photo by Charlie Riedel/AP Photo) 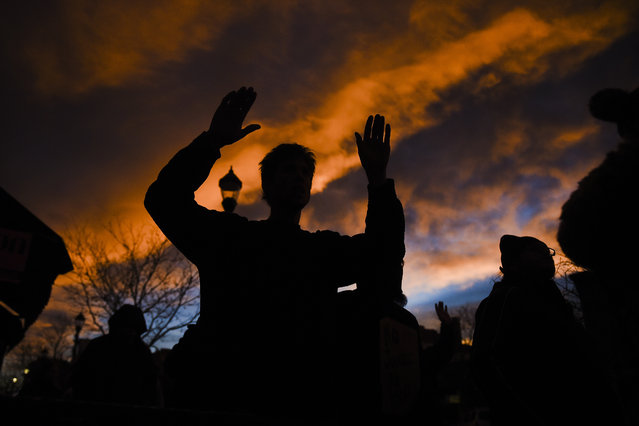 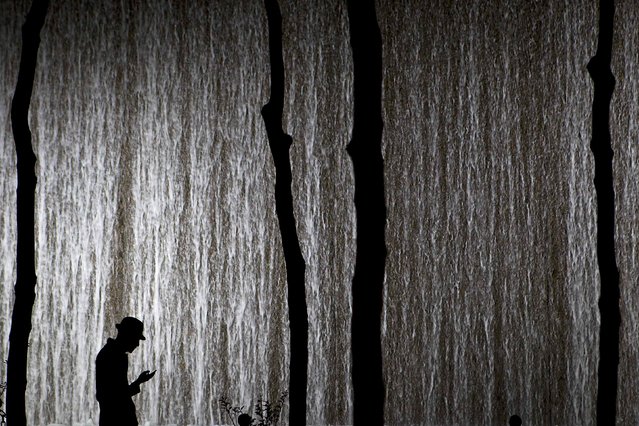 A man wearing a fedora hat looks at his phone in a courtyard with a water feature (rear) in New York November 24, 2014. (Photo by Carlo Allegri/Reuters) 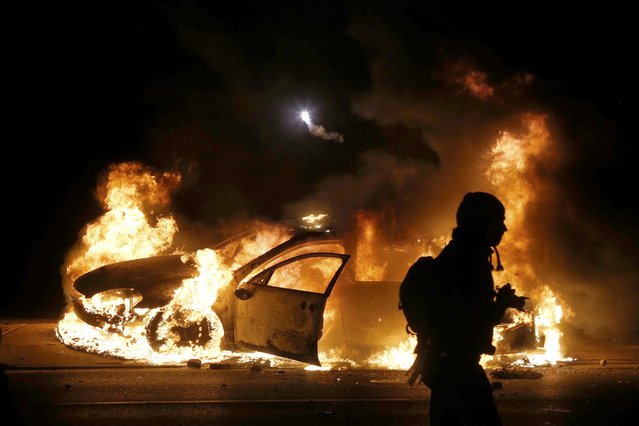 A police car burns on the street after a grand jury returned no indictment in the shooting of Michael Brown in Ferguson, Missouri November 24, 2014. Gunshots were heard and bottles were thrown as anger rippled through a crowd outside the Ferguson Police Department in suburban St. Louis after authorities on Monday announced that a grand jury voted not to indict a white officer in the August shooting death of an unarmed black teen. (Photo by Jim Young/Reuters) 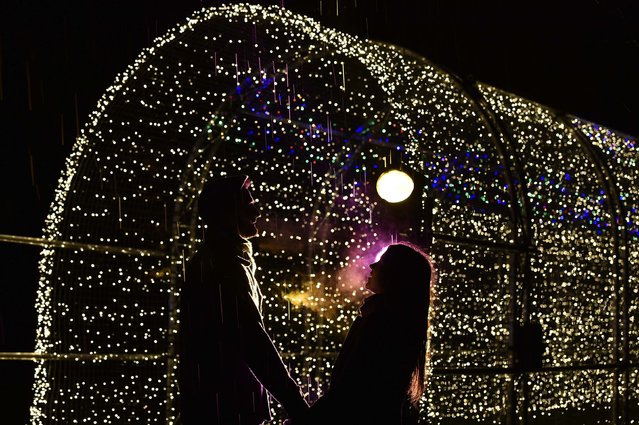 Alex Little (L) and Miranda Jenatka pose as they view a light installation at Kew Gardens in west London, November 25, 2014. The annual Christmas illuminated night trail at the botanical gardens will open from Wednesday until January 3, 2015. (Photo by Toby Melville/Reuters) 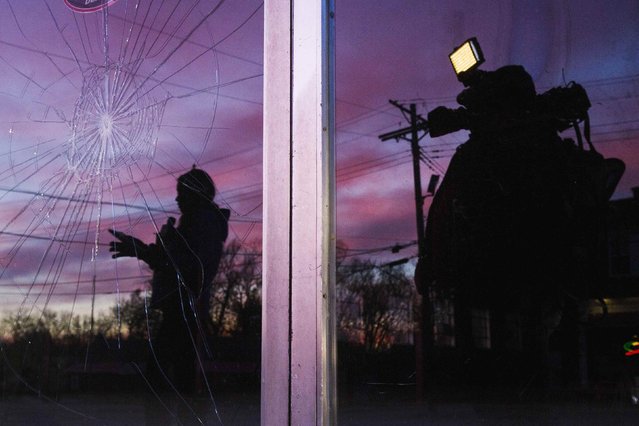 A news reporter does her stand up in front of a shattered storefront as the sun rises following a second night of protests in Ferguson, Missouri November 26, 2014. Aiming to head off new looting and rioting, Missouri's governor on Tuesday ordered National Guard reinforcements into the St. Louissuburb of Ferguson following overnight violence ignited by the clearing of a white police officer in the fatal shooting of an unarmed black teenager. (Photo by Lucas Jackson/Reuters) 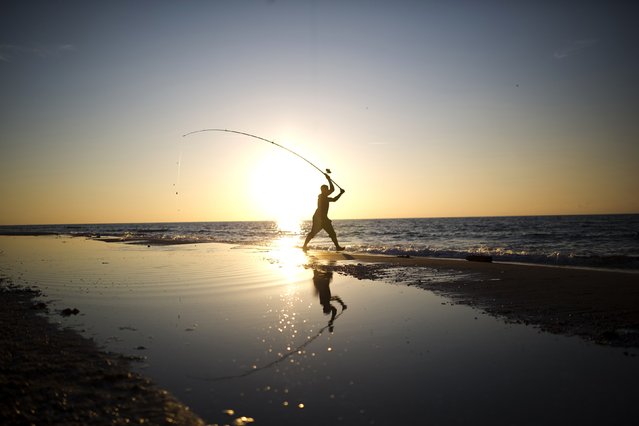 A man casts his fishing line in the Mediterranean Sea on Zikim beach, near Ashkelon November 30, 2014. (Photo by Amir Cohen/Reuters) 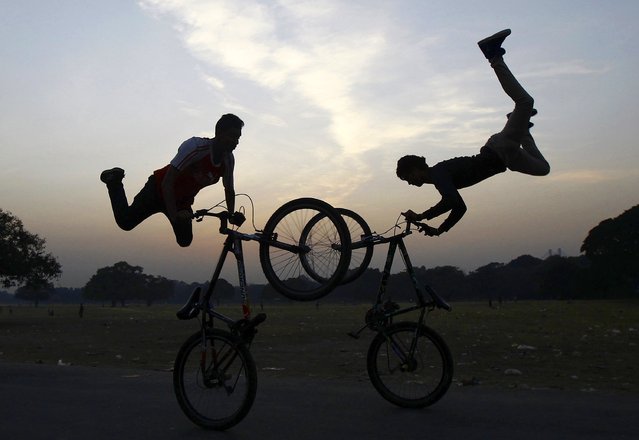 Cyclists perform a stunt as they practice ahead of the Hip-Hop Carnival in Kolkata December 2, 2014. The cyclists will perform in the carnival which be will be held in Kolkata on December 13, the cyclists said. (Photo by Rupak De Chowdhuri/Reuters) 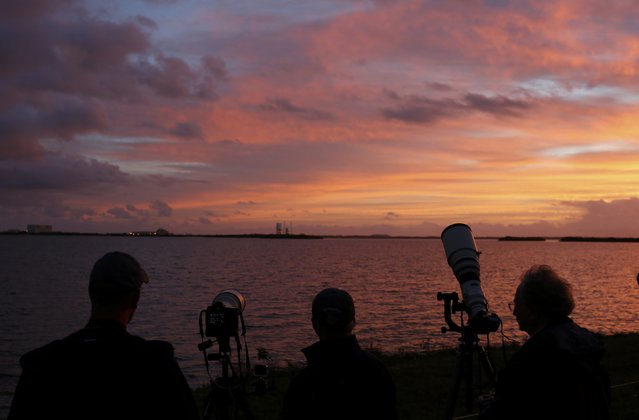 News photographers and journalists watch as the sun rises on the Delta IV Heavy rocket carrying the Orion spacecraft waiting for liftoff on the launch pad from the Cape Canveral Air Force Station in Cape Canaveral, Florida December 4, 2014. (Photo by Scott Audette/Reuters) 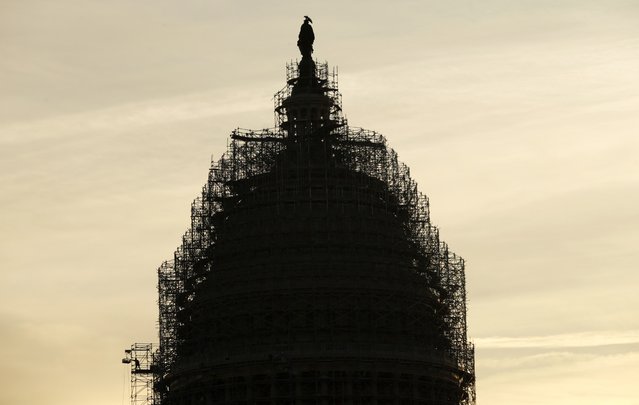 A worker (L) reaches for supplies while working atop the scaffolded dome of the U.S. Capitol in Washington December 4, 2014. The Capitol Dome is undergoing a multi-year restoration to stop the current level of deterioration in the Dome's cast iron as well as ensuring the protection of the interior of the Dome and Rotunda. The restoration project includes removal of old paint, repairs to the cast iron and stone, and repainting. (Photo by Kevin Lamarque/Reuters) 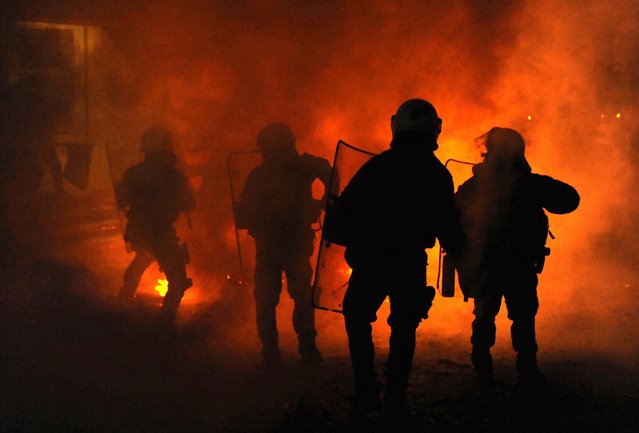 Riot police are seen through a cloud of smoke during clashes with masked youths who occupied the Labour Center of Thessaloniki December 6, 2014. Greek police fired teargas to disperse protesters who hurled petrol bombs at police and set alight bank ATMs and garbage cans in towns around Greece on Saturday, during marches held on the anniversary of the 2008 police killing of a teenager. (Photo by Alexandros Avramidis/Reuters) 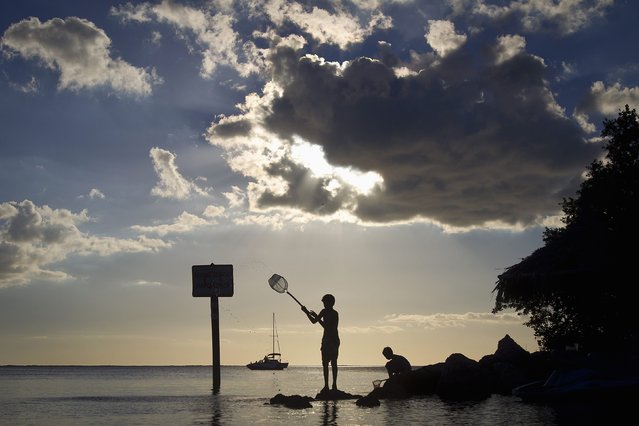 Boys play on rocks with their dip net in Blackwater Sound in Key Largo, Florida, December 7, 2014. (Photo by Carlo Allegri/Reuters) 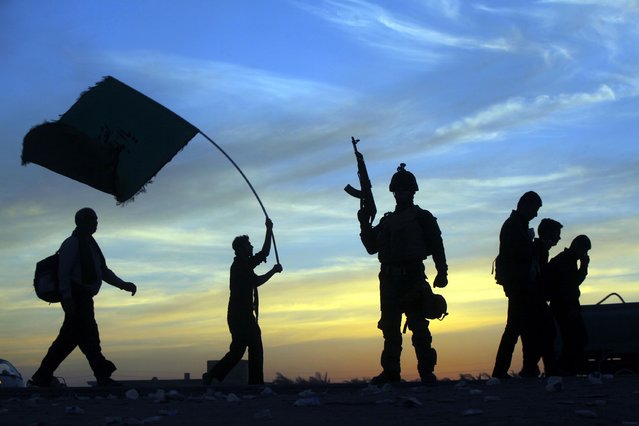 Shi'ite Muslim pilgrims walk to the holy city of Kerbala, ahead of the holy Shi'ite ritual of Arbaeen, in Najaf, December 8, 2014. Arbaeen falls 40 days after the holy day of Ashura. (Photo by Alaa Al-Marjani/Reuters) 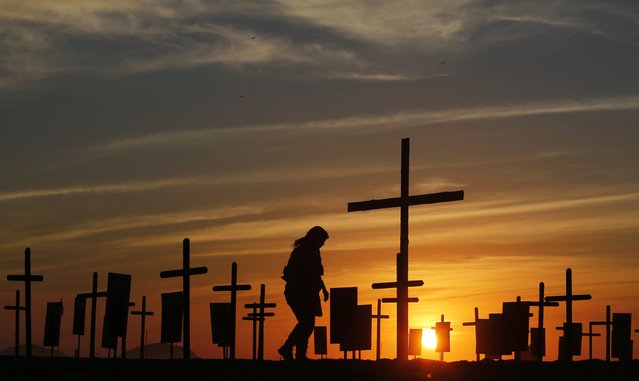 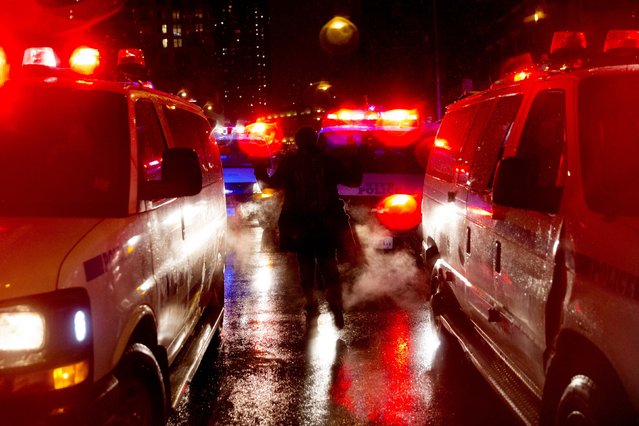 A man performs the “Hands-Up Don't Shoot” gesture as he walks between police vehicles during a march for chokehold death victim Eric Garner in New York December 5, 2014. Protesters in New York and other cities staged a third night of rallies on Friday, denouncing use of deadly force by police against minorities. This week's wave of angry but largely peaceful protests began Wednesday when a New York grand jury declined to bring charges against white police officer Daniel Pantaleo in the chokehold death of Garner, a black 43-year-old father of six. (Photo by Andrew Kelly/Reuters) 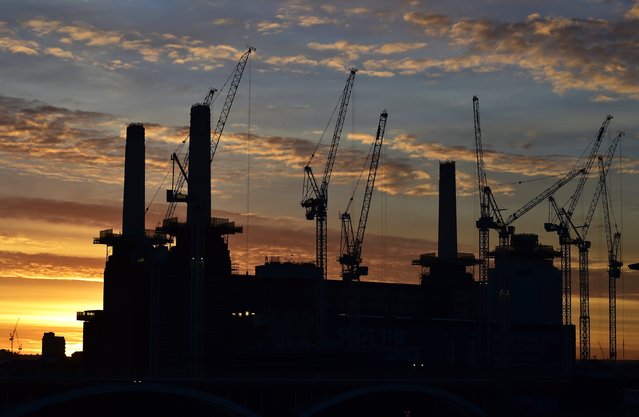 Battersea Power Station is seen at dawn, surrounded by cranes and with one of it's four iconic chimneys missing, in London, December 9, 2014. The decommissioned coal-fired power station, not used since 1983, is being redeveloped into retail, office and residential use over the next four years. One of the planning requirements is the preservation of the character of the original building, which involves taking down each chimney and wash tower and then rebuilding them. (Photo by Toby Melville/Reuters) 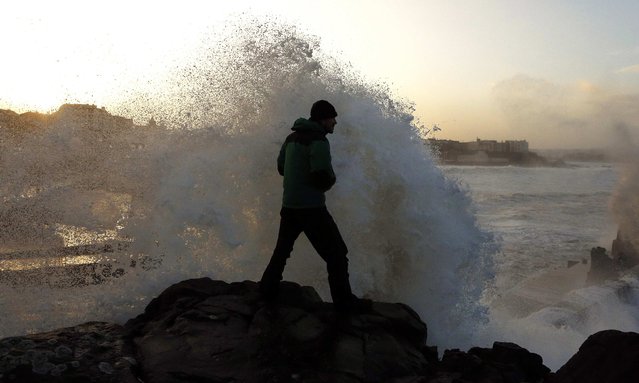 A man watches as waves crash into a cliff at Portstewart in northern Ireland December 10, 2014. Up to 17,000 residents in the west of Scotland were left without power on Wednesday morning as a “weather bomb” of wet and windy conditions battered parts of Britain with gusts expected to reach up to 80 miles per hour (130 km/h). (Photo by Cathal McNaughton/Reuters) 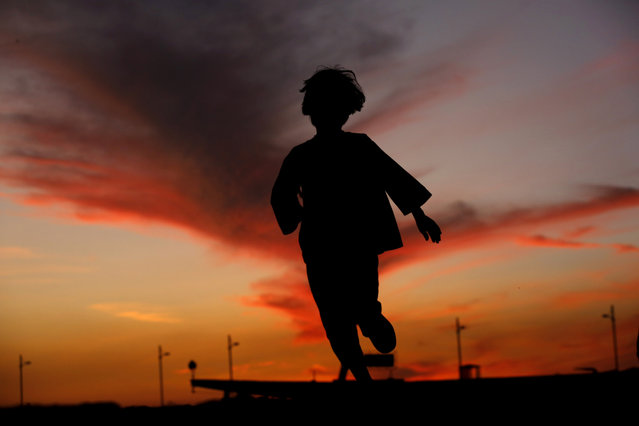 A child plays druing sunset near a jetty on the Yangon River, Yangon, Myanmar, December 1, 2014. The River, which is navigable by ocean going vessels, plays an important role in the economy of Mayamar. (Photo by Lynn Bo Bo/EPA) Retired paramilitary policemen, who conduct the daily national flag raising and lowering ceremony on Tiananmen Square, salute to a Chinese national flag during a farewell ceremony in Beijing, November 24, 2014. (Photo by Reuters/Stringer) 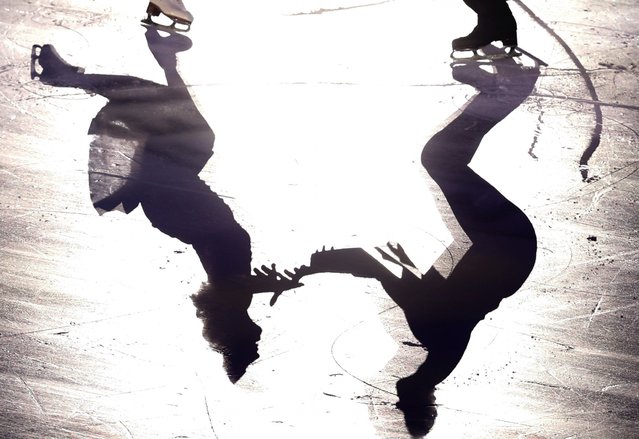 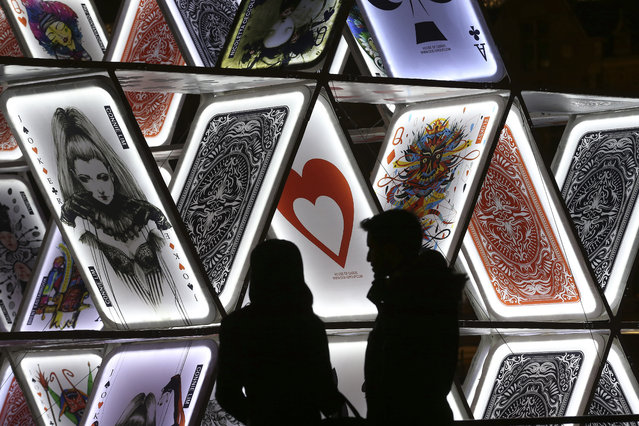 In this Saturday, November 29, 2014 photo, a couple looks at a light sculpture called, “House of Cards”, by OGE Creative Group, from Israel, near Central Station in Amsterdam. The sculpture is a playful part of the Amsterdam Light Festival, which opened Nov. 27, 2014. In a giant open air exhibition that lasts until Jan. 18, the waterways and web of canals that make up the historic heart of Amsterdam, form a backdrop for dozens of works of art. (Photo by Peter Dejong/AP Photo) 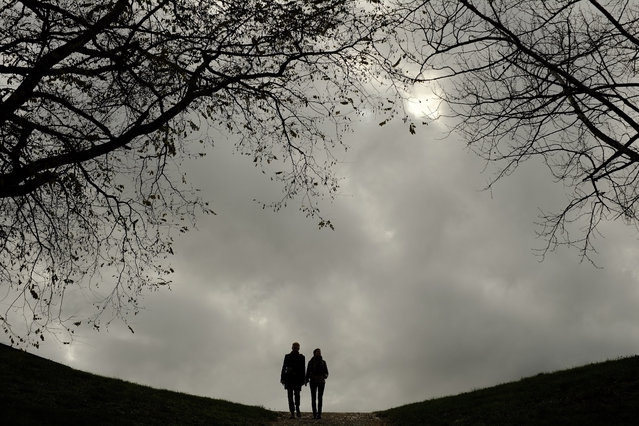 A couple go for a walk in Ciudadela Park on an autumn day, in Pamplona northern Spain, Wednesday, November 26, 2014. (Photo by Alvaro Barrientos/AP Photo) A general view of the sunrise over Hawes, Wensleydale, UK on November 24, 2014. (Photo by Neil Squires/PA Wire) 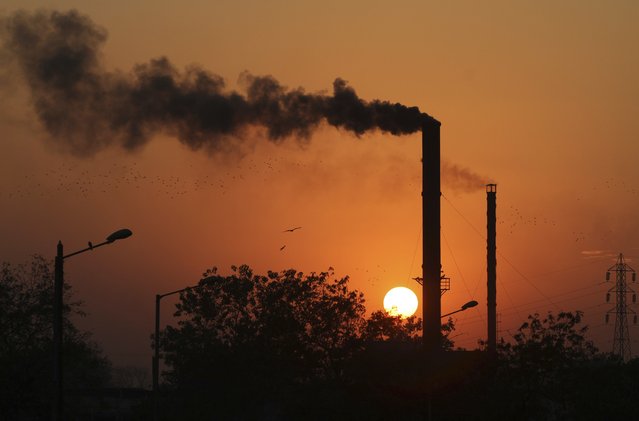 Birds fly past at sun set as smoke emits from a chimney at a factory in Ahmadabad, India, Monday, December 8, 2014. The momentum from a historic U.S.-China pact to resist global warming is showing signs of fading at the U.N. climate talks in Peru as the familiar rich-poor conflict persists over who should do what to keep the planet from overheating. The conference's high-level phase begins Tuesday. (Photo by Ajit Solanki/AP Photo) 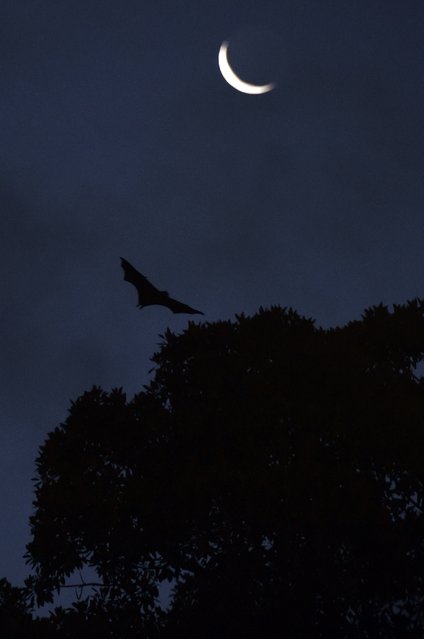 A bat flys over an inner-city Sydney park on November 25, 2014 as New South Wales is set to unveil tougher measures to tackle bats after three flying foxes were found to be carrying the deadly lyssavirus, officials said. The New South Wales government fears transmission of the potentially fatal Australian bat lyssavirus (ABLV) to humans and the state's health department has issued a warning to residents not to approach the bats. (Photo by William West/AFP Photo) 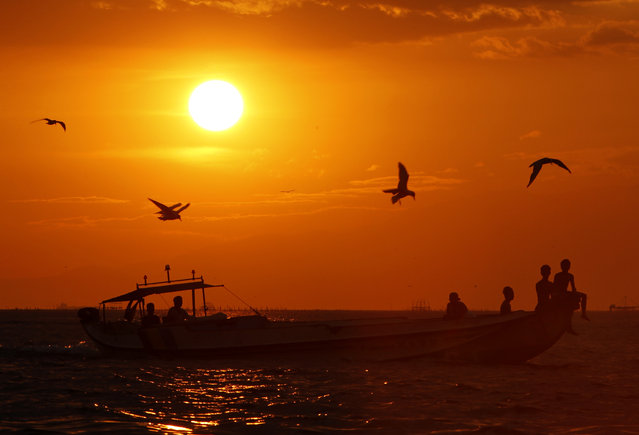 Filipino fishermen return from fishing in anticipation of strong winds brought by an upcoming typhoon in Navotas city, north of Manila, Philippines, December 4, 2014. A powerful cyclone has intensified as it heads towards the Philippines, threatening the same areas devastated by super typhoon Haiyan last year, the weather bureau said. Typhoon Hagupit was packing maximum winds of 195 kilometres per hour (kph) and gusts of up to 230 kph as it moved closer to the country's east coast at a speed of 20 kph, the bureau said. (Photo by Ritchie B. Tongo/EPA) 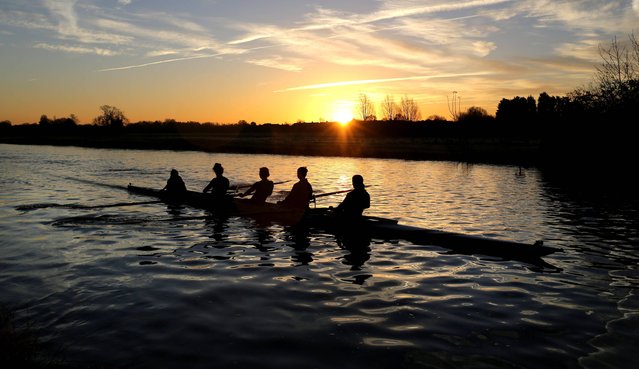 Rowers work out along the river Cam in Cambridge November 24, 2014, as much of Britain was covered with a light frost. (Photo by Chris Radburn/PA Wire)
Edit Del
11 Dec 2014 13:50:00, post received 0 comments
Publication archive:
←   →
Popular tags:
All tags
Last searches: