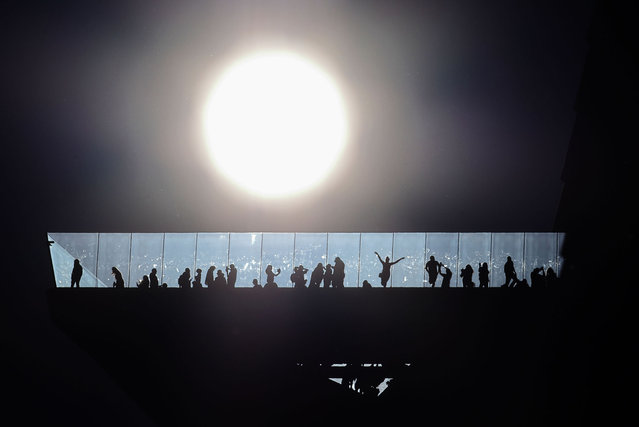 The sun passes behind the EdgeNYC observation deck at Hudson Yards on July 31, 2021 in New York City. (Photo by Gary Hershorn/Getty Images) 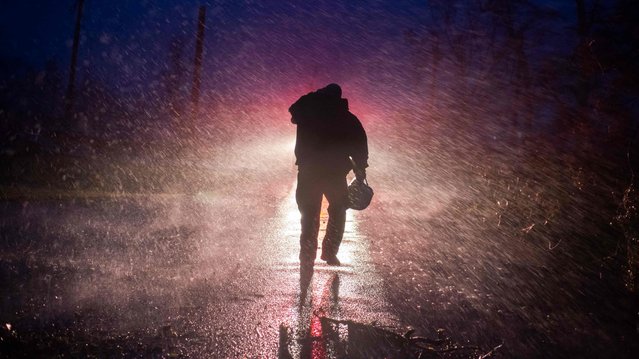 Montegut fire chief Toby Henry walks back to his fire truck in the rain as firefighters cut through trees on the road in Bourg, Louisiana as Hurricane Ida passes on August 29, 2021. Hurricane Ida struck the coast of Louisiana on August 29 as a powerful Category 4 storm, 16 years to the day after deadly Hurricane Katrina devastated the southern US city of New Orleans. “Extremely dangerous Category 4 Hurricane Ida makes landfall near Port Fourchon, Louisiana”, the National Hurricane Center wrote in an advisory. (Photo by Mark Felix/AFP Photo) 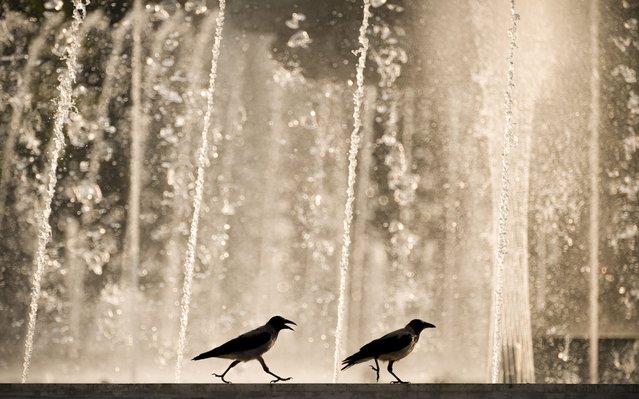 Two crows walk by a city fountain at sunset after a hot day in Bucharest, Romania, Monday, August 9, 2021. Southern Romania is affected by a heatwave which will continue in the coming days, with temperatures reaching 37 degrees Centigrade (98,6 Fahrenheit). (Photo by Vadim Ghirda/AP Photo) 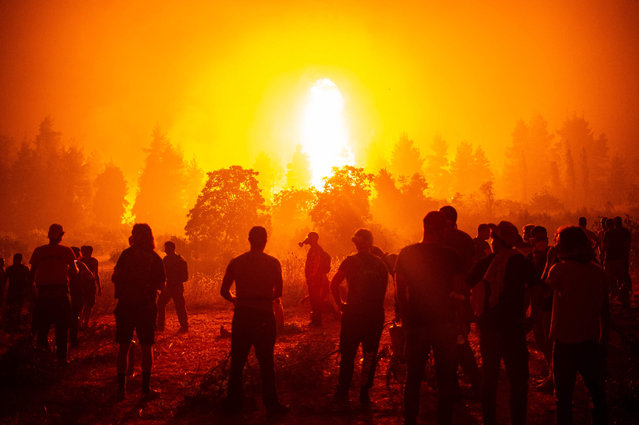 Local youths and volunteers gather in an open field and wait to support firefighters during a wildfire next to the village of Kamatriades, near Istiaia, northern Evia (Euboea) island on August 9, 2021. Firefighters tried on August 9, to prevent fires from reaching key communities and a thick forest that could fuel an inferno that one official said has destroyed hundreds of homes in seven days on the Greek island of Evia. If most of nearly two weeks of fires had stabilised or receded in other parts of Greece, the ones on rugged and forested Evia were the most worrying and created apocalyptic scenes. (Photo by Angelos Tzortzinis/AFP Photo) 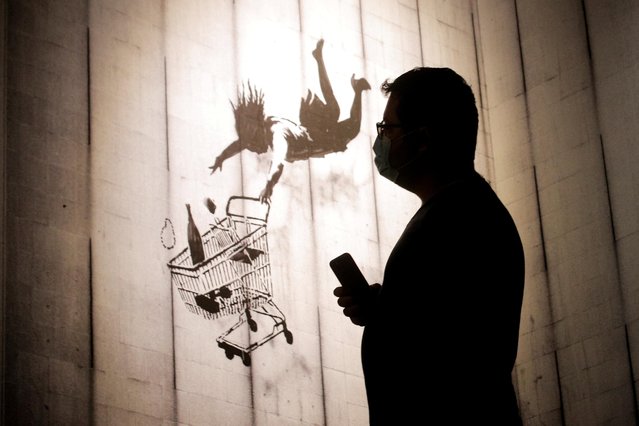 A guest attends the preview of the Banksy: “Genius or Vandal?” exhibit in New York City, U.S., September 1, 2021. (Photo by Brendan McDermid/Reuters) 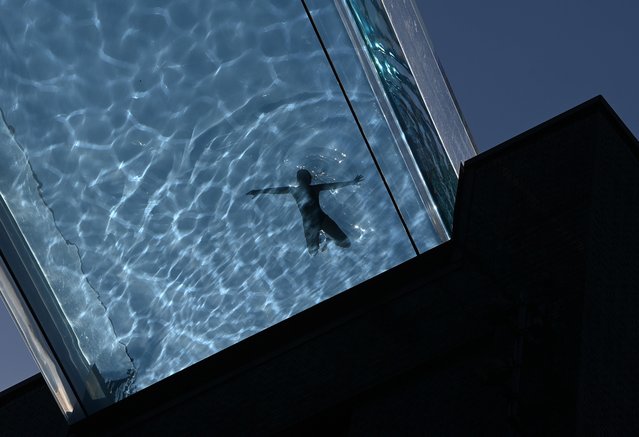 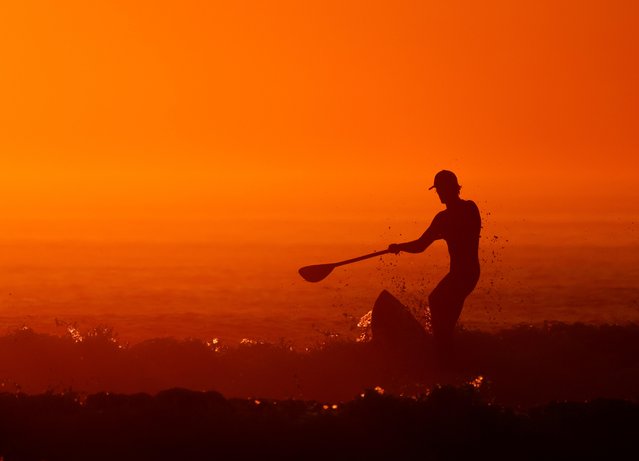 A man on a paddle board surfs during sunset at La Torche, as a heat wave hits France, in Plomeur, Brittany, France, September 6, 2021. (Photo by Pascal Rossignol/Reuters) 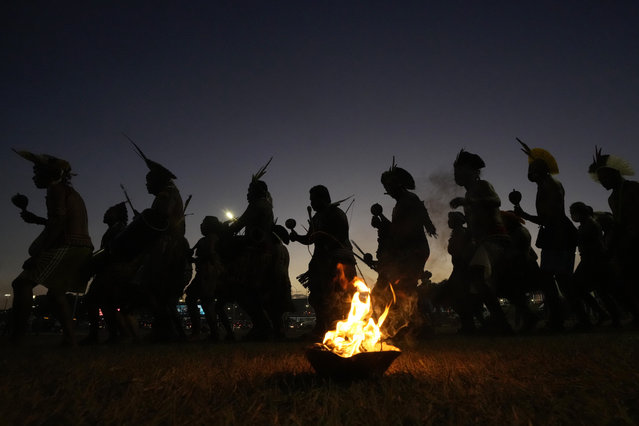 Indigenous men perform a ritual dance as Indigenous groups set up the “Luta pela Vida” or Struggle for Life camp, in Brasilia, Brazil, Monday, August 23, 2021. The groups arrive to the capital for a weeklong Struggle for Life mobilization to protests against a Supreme Court ruling that could undermine rights to their lands, and against President Jair Bolsonaro's government. (Photo by Eraldo Peres/AP Photo) 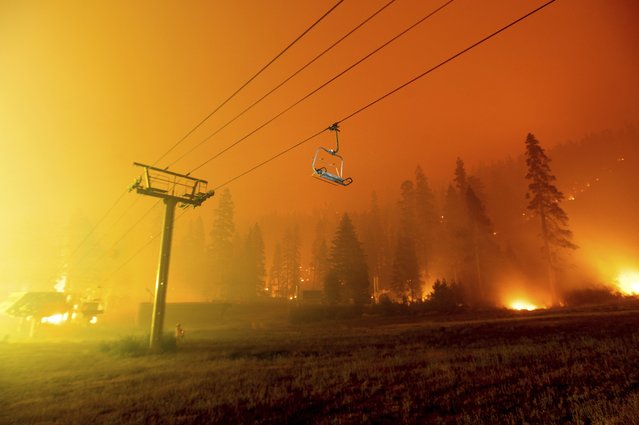 Seen in a long camera exposure, the Caldor Fire burns at the Sierra-at-Tahoe ski resort on Sunday, August 29, 2021, in Eldorado National Forest, Calif. The main buildings at the ski slope's base survived as the main fire front passed. (Photo by Noah Berger/AP Photo) 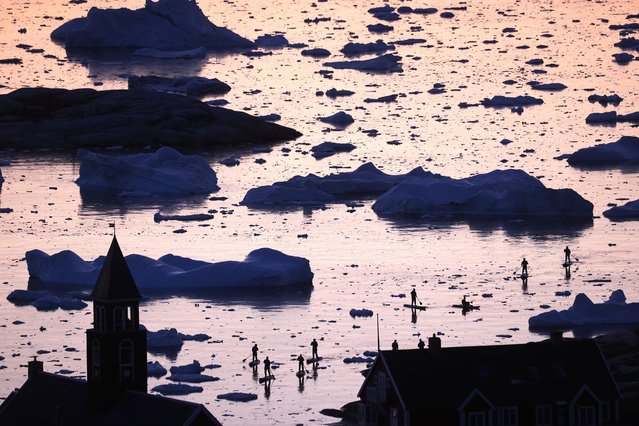 People ride stand-up paddle boards past floating ice and icebergs in Disko Bay on September 02, 2021 in Ilulissat, Greenland. Greenland in 2021 is experiencing one of its biggest ice-melt years in recorded history. Scientists studying the Greenland Ice Sheet observed rainfall on the highest point in Greenland for the first time ever in August. Researchers from Denmark estimated that in July of this year, enough ice melted on the Greenland Ice Sheet to cover the entire state of Florida with two inches of water. The observations come on the heels of the recent United Nations report on global warming which stated that accelerating climate change is driving an increase in extreme weather events. (Photo by Mario Tama/Getty Images) 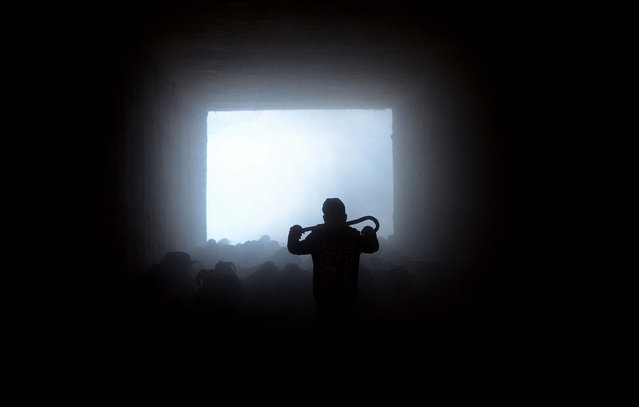 Sheep herds travel among the dust to the tablelands of Nemrut Mountain during sunset in Tatvan district of Bitlis, Turkey on August 04, 2021. (Photo by Ahmet Okur/Anadolu Agency via Getty Images) 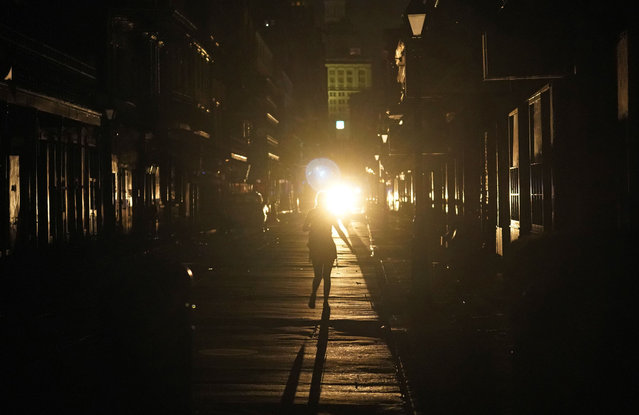 A police officer patrols past woman walking along Bourbon Street in the French Quarter after Hurricane Ida knocked out power to the city, Monday, August 30, 2021, in New Orleans, La. (Photo by Eric Gay/AP Photo) 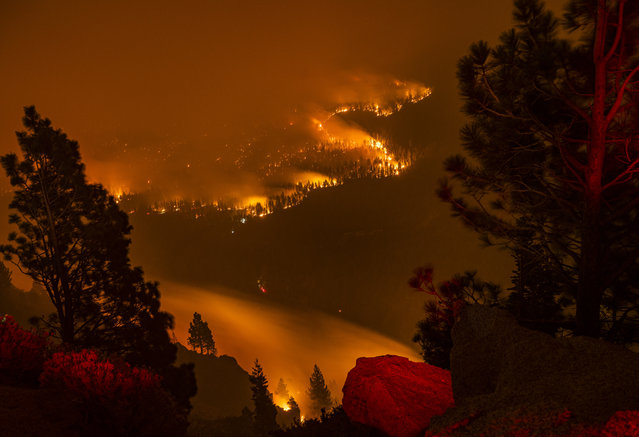 The Caldor Fire burns into the Christmas Valley and the town of Meyers near South Lake Tahoe early Tuesday morning on August 31, 2021 as seen from US 50 at Echo Summit. These images were taken with long exposures.The Caldor Fire burns between Echo Summit, Meyers, and South Lake Tahoe overnight late Monday evening August 30th, 2021 and early Tuesday morning, August 31st, 2021 in El Dorado County. Mandatory evacuations were in place to the Nevada state line as SW winds and a red flag warning pushed the fire further east. The fire was over 191,600 acres and 16% contained as flames reached structures in the South Lake Tahoe area Tuesday morning. (Photo by Stuart Palley for The Washington Post) 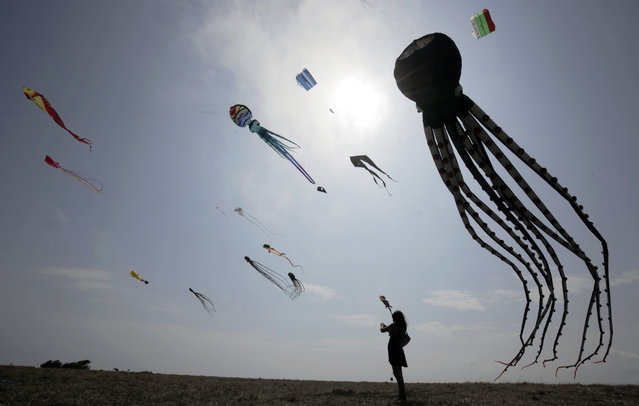 A girl is looking at kites during First Varvara Kite Fest in the village of Varvara on Bulgarian Black Sea coast, some 450 km Southeast from Sofia, Friday, August 27, 2021. Varvara Kite Fest organiser Andrey Kulev says that flying a kite is like releasing all your problems in the sky. (Photo by Valentina Petrova/AP Photo) 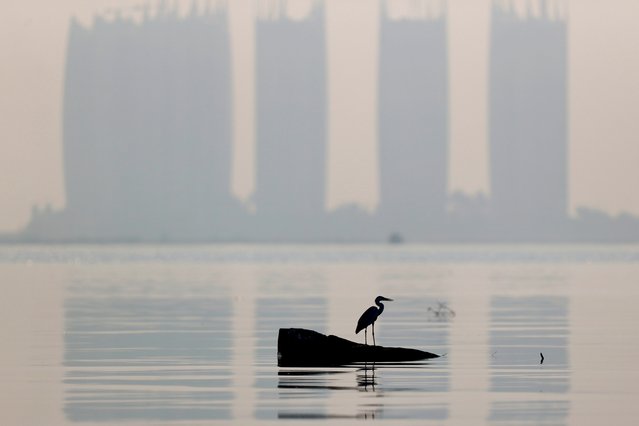