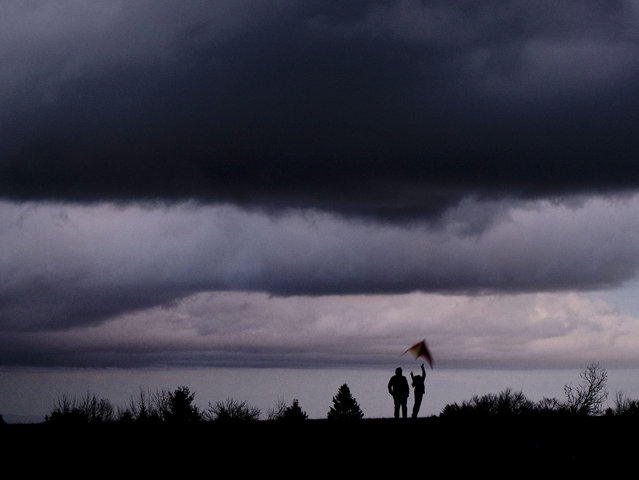 A child tries to start a kite on top of the Feldberg mountain near Frankfurt, Germany, late Sunday, November 11, 2018. (Photo by Michael Probst/AP Photo) 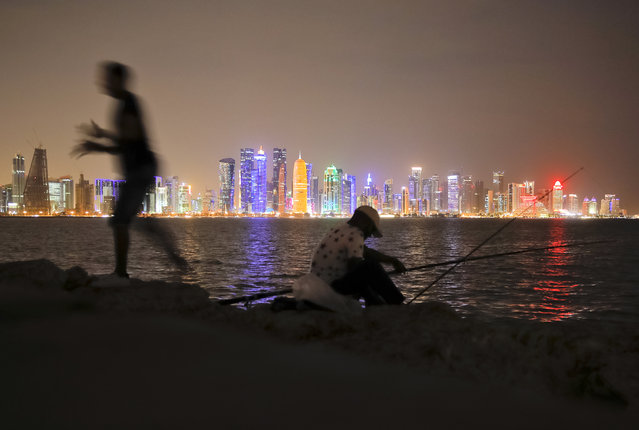 In this November 2, 2018 picture men fish, backdropped by the city skyline Doha, Qatar. Eight stadiums scattered in a 30-mile radius that will host 32 teams from across the planet are in various stages of development, most of them trying to walk the treacherous line of paying homage to the region's history while simultaneously avoiding becoming an expensive and unused relic once the party ends and everyone else goes home. (Photo by Vadim Ghirda/AP Photo) 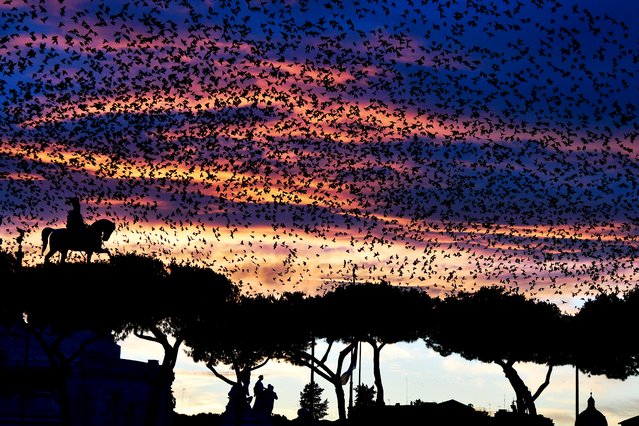 A swarm of starlings flies over the Altare della Patria monument (Unknown soldier) in the city centre of Rome during sunset, on November 27, 2018. (Photo by Vincenzo Pinto/AFP Photo) 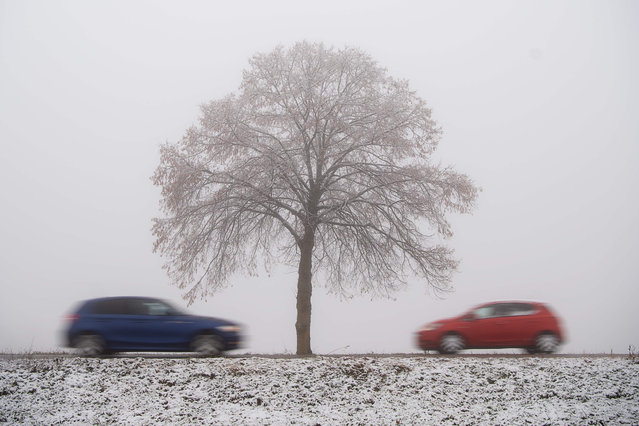 Cars drive on a country road through the snowy landscape in Grabenstetten near Reutlingen, southwestern Germany, on November 27, 2018. (Photo by Sebastian Gollnow/DPA via AFP Photo) 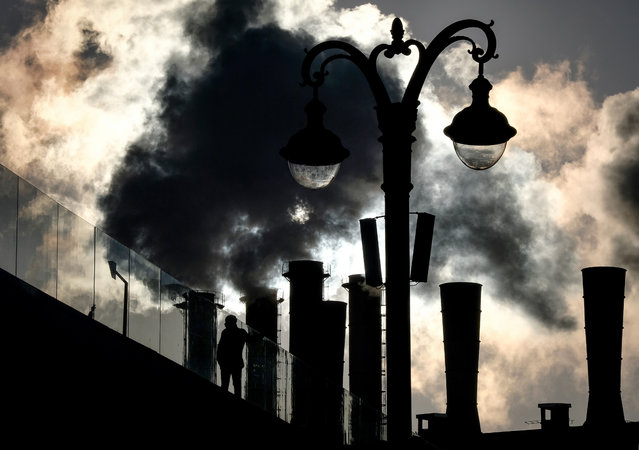 A man poses for a picture on a pedestrian bridge at the Zaryadye Park, with a power plant in the background, in downtown Moscow on November 23, 2018. (Photo by Yuri Kadobnov/AFP Photo) 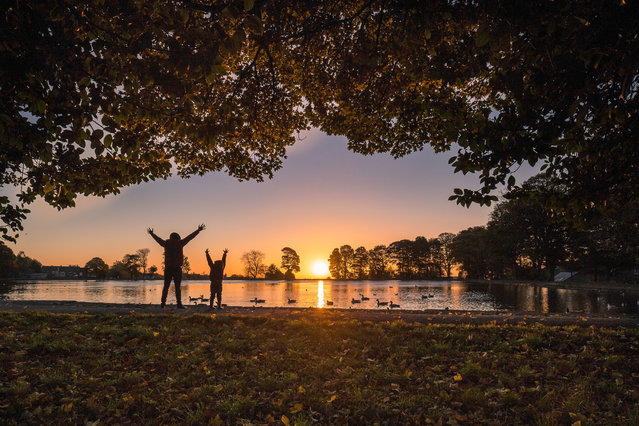 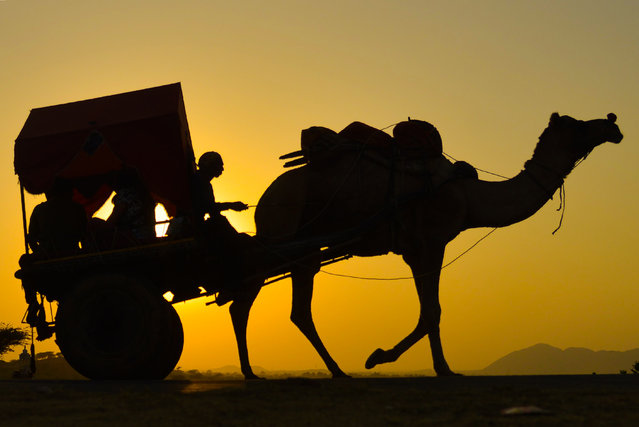 An Indian man rides on a camel cart during at the Pushkar Camel Fair in Pushkar, in the western state of Rajasthan on November 12, 2018. Thousands of livestock traders from the region come to the traditional camel fair where livestock, mainly camels, are traded. The annual five-day camel and livestock fair is one of the world's largest camel fairs. (Photo by Shaukat Ahmed/AFP Photo) 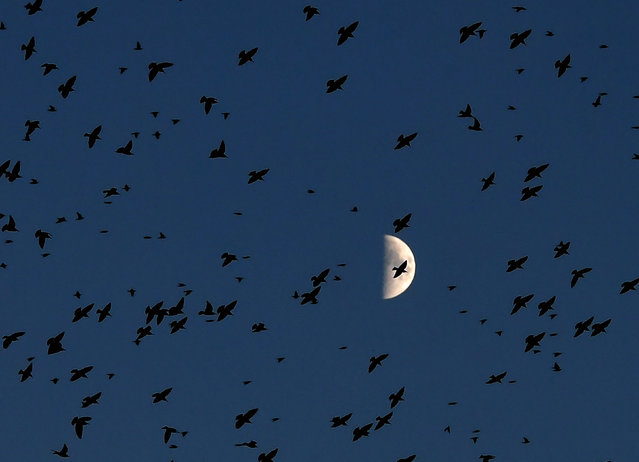 Starlings fly in the sky above Rome with the moon in background on November 15, 2018. (Photo by Tiziana Fabi/AFP Photo) 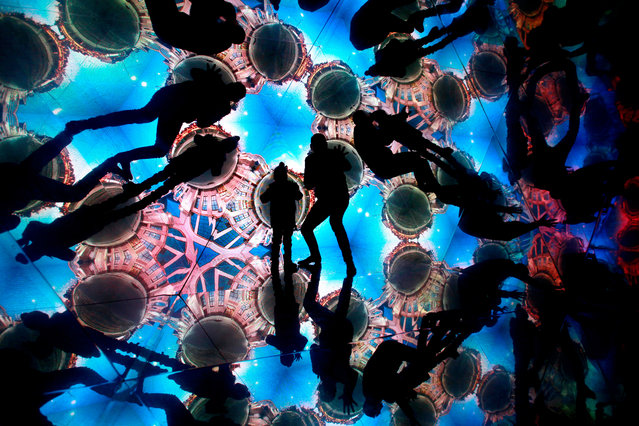 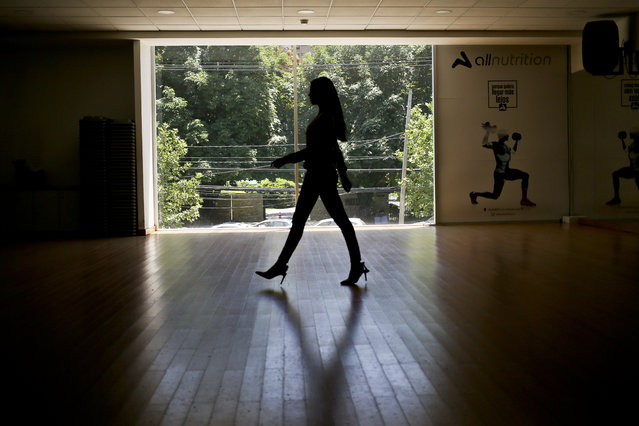 Venezuelan born Andrea Diaz, Miss Chile, takes part in a runway class in Santiago, Chile, Thursday, November 8, 2018. “I represent the new Chile”, the 26-year-old said as she was training at a local gym in Santiago for the upcoming competition. “This is an inclusive country where immigrants come in search of opportunities”. (Photo by Esteban Felix/AP Photo) 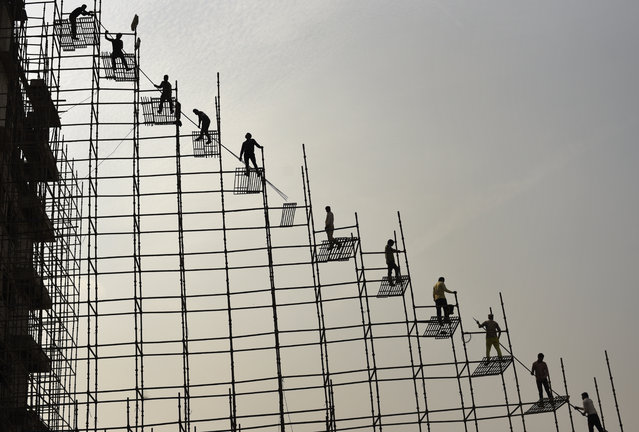 Indian laborers standing on scaffolding shift steel rods from the ground to the top of an under construction hospital building in Greater Noida, near New Delhi, India, Thursday, November 22, 2018. Building work in the capital region has resumed after authorities last week lifted a ban on construction activities they had imposed to combat air pollution. (Photo by R.S. Iyer/AP Photo) 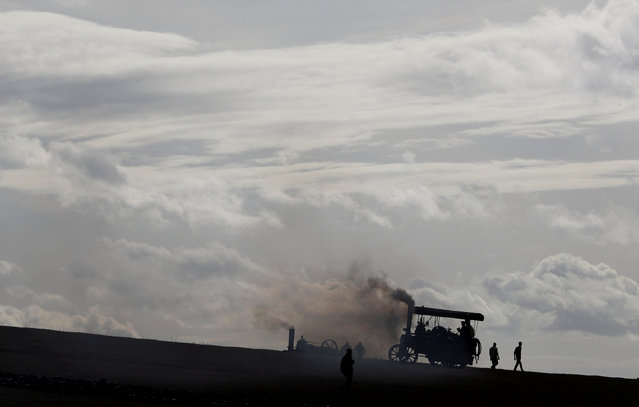 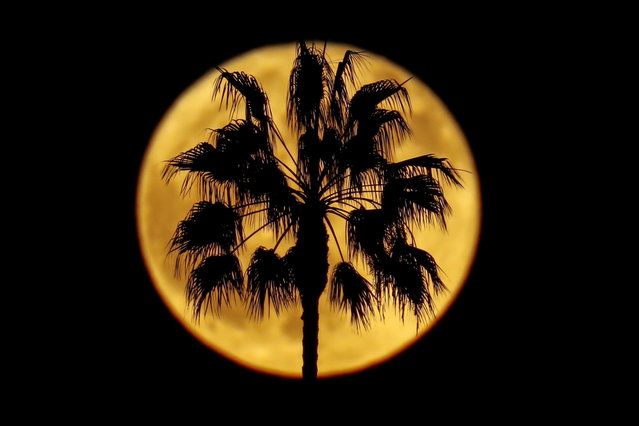 A full moon rises past a palm tree in Encinitas, California on October 25, 2018. (Photo by Mike Blake/Reuters) 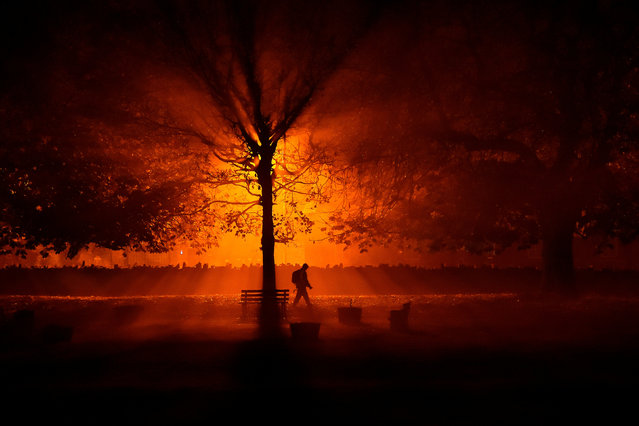 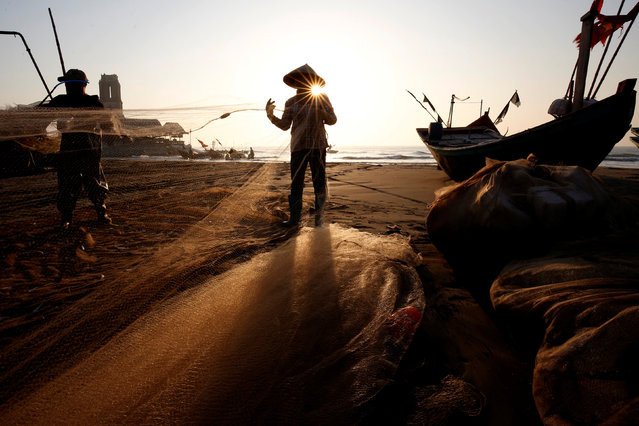 Fishermen clean their nets at a beach in Nam Dinh province, Vietnam November 2, 2018. (Photo by Reuters/Kham) 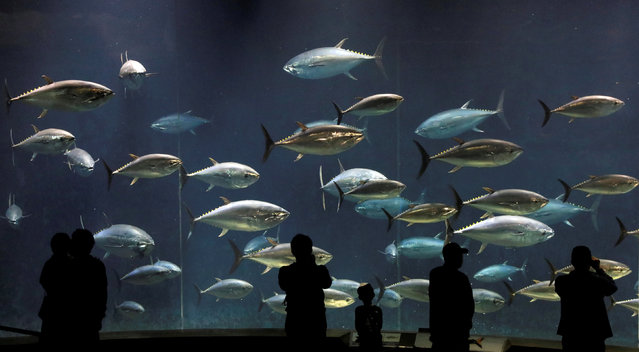 Visitors look at bluefin tunas swimming in a tank at the Tokyo Sea Life Park in Tokyo, Japan, November 2, 2018. (Photo by Toru Hanai/Reuters) 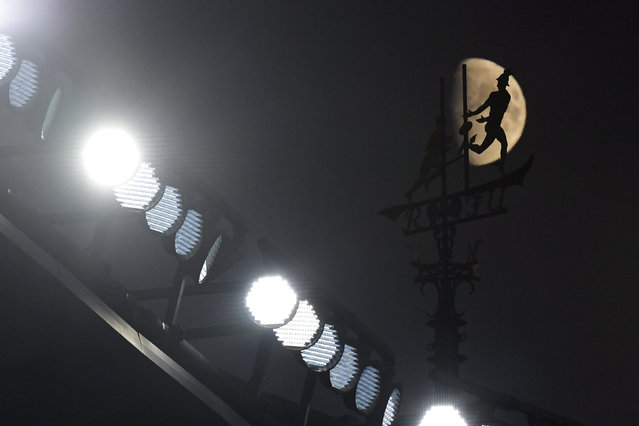 The stadium weather vane is silhouetted against the moon during the International Friendly match between England and United States at Wembley Stadium on November 15, 2018 in London, United Kingdom. (Photo by Toby Melville/Reuters) 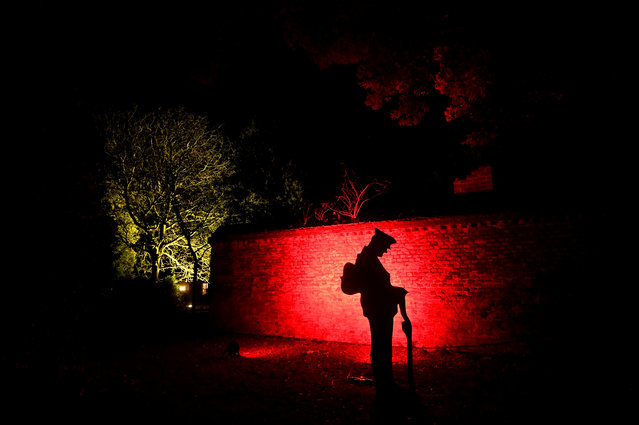 A figure of a World War I soldier is seen as buildings and trees are seen illuminated as part of the annual Winter Wonderland trail at Syon Park in west London on November 19, 2018. (Photo by Toby Melville/Reuters) 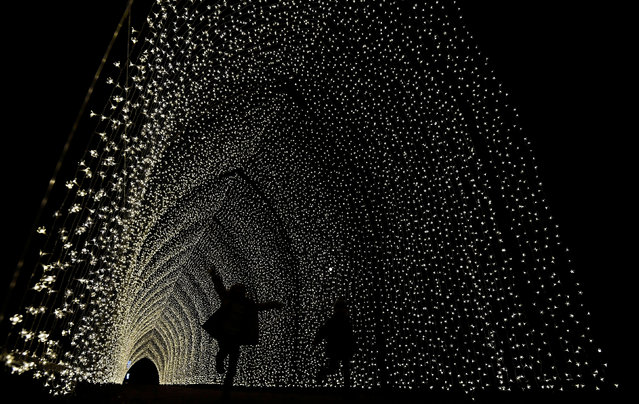 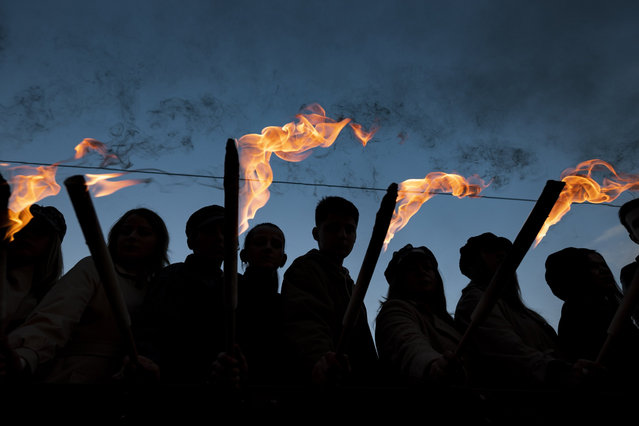 Young people hold torches as they ride an old, historical truck during a march from the Budapest University of Technology and Economics through the streets of Budapest, Hungary, to re-enact the protest march of Hungarian students in 1956 which ignited the revolution and war of independence against communist rule and the Soviet Union, 22 October 2018, the eve of the 62nd anniversary of the outbreak of the 1956 revolution in Hungary. (Photo by Marton Monus/EPA/EFE)
Edit Del
29 Nov 2018 00:03:00, post received 0 comments
Publication archive:
←   →
Popular tags:
All tags
Last searches: