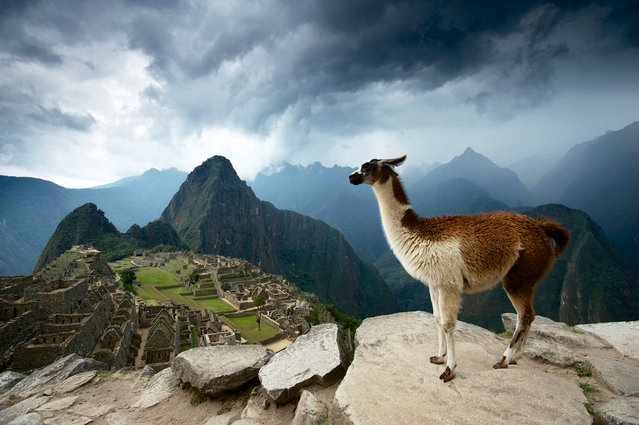 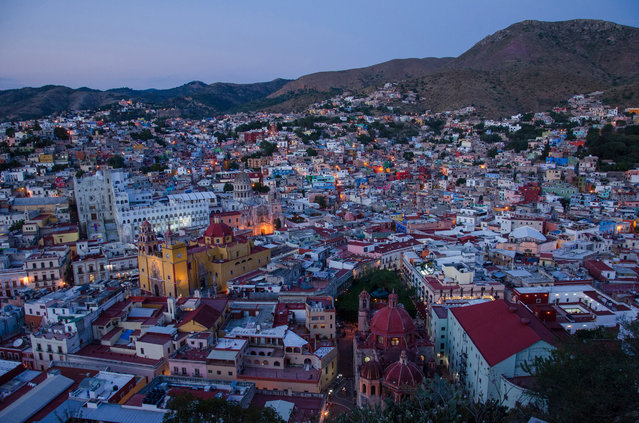 Guanajuato, Mexico. Photographer Pete McBride writes: ‘I visited Guanajuato to do a story about Josefa Ortiz Dominguez, a Mexican heroine – and possible distant relative – who helped start the revolution against the Spanish in 1810. This was a key location on the Ruta de la Independencia – the main path of fighting that led to Mexico’s independence. I shot the image at the overlook of this historic, festive town at dusk on the evening of 1 November, Day of the Dead, symbolic timing when chasing the ghosts of my family history’. (Photo by Peter Mcbride/National Geographic) 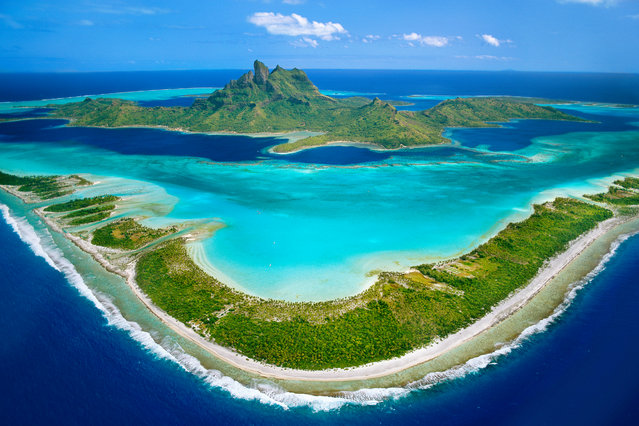 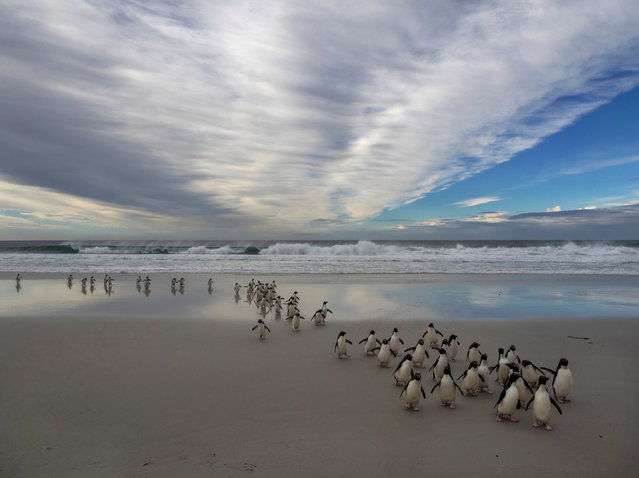 Saunders Island, Falkland Islands. Photographer Jay Dickman writes: ‘This particular afternoon on Saunders Island was quite beautiful, with the lowering sun providing a warm light that washed the wildlife and landscape. As I watched, cycles of waves pounding the shoreline would reveal groups of penguins making their transition from the surf of the South Atlantic Ocean to the sandy shore. This set of southern rockhopper penguins looked to me to be a perfectly formed brigade (in proper ranks, it seemed), marching to their terra firma nests’. (Photo by Jay Dickman/National Geographic) 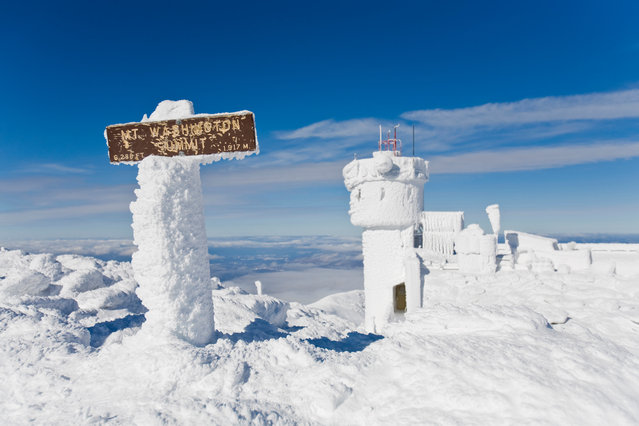 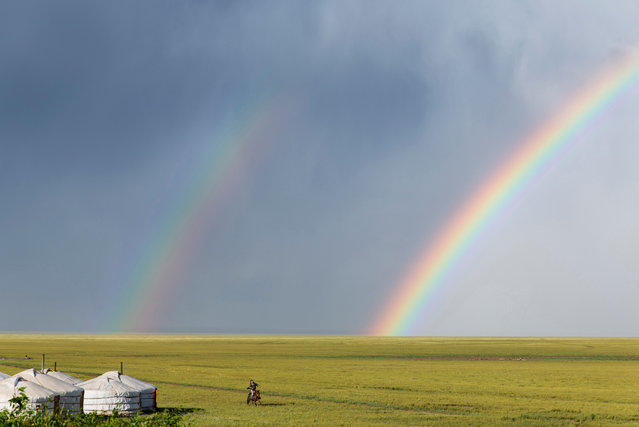 Gobi, Mongolia. Photographer Ira Block writes: ‘The weather had been changing constantly in Mongolia’s southern Gobi, not far from the border with China. After a storm passed, a rainbow appeared, then a second one. The gers (yurts) added scale and depth to my composition, but when I saw the rider on horseback I knew this was my chance to add motion to my photo. I waited until they were between the rainbows and started shooting as fast as I could to capture the moment, the light, the rainbows, and the stormy sky’. (Photo by Ira Block/National Geographic) 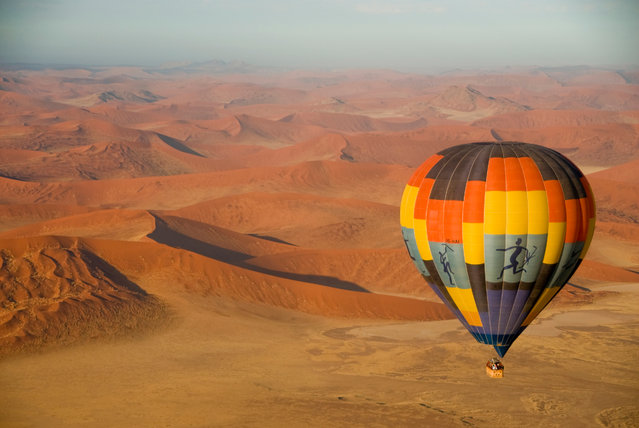 Sossusvlei Dunes, Namibia. Sossusvlei is home to the largest sand dunes in the world, shaped by the wind. High levels of iron in the sand create its distinctive glowing hue. (Photo by Annie Griffiths Belt/National Geographic) 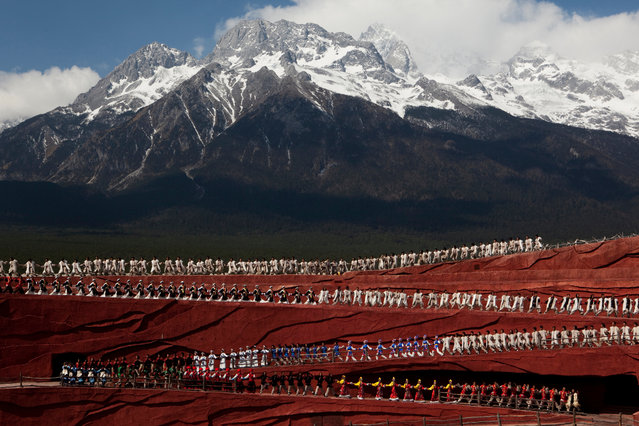 Lijiang, China. Photographer Amy Toensing writes: ‘I’m not a huge fan of photographing performances, but I have to say this one blew me away visually. There were around 400 performers gathered from 10 different Chinese ethnic groups, and many times, as in this image, it appeared they were all onstage together, dancing, singing, and playing instruments. The show takes place at about 10,000 feet (3,048m), with the 18,360ft (5,596m) Jade Dragon Snow Mountain (Yulongxue Shan) as a stunning backdrop’. (Photo by Amy Toensing/National Geographic) 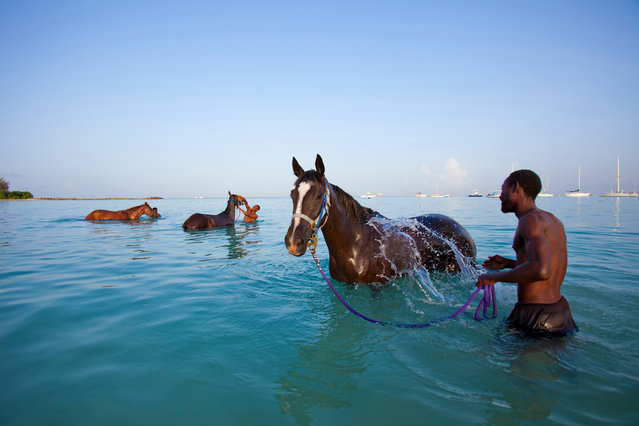 Garrison Savannah, Barbados. Photographer Susan Seubert writes: ‘While I was on assignment in Barbados, a hotel owner suggested I get up at 3am to watch the Turf Club horses being bathed in the ocean at sunrise. I drove in the pitch black to the waterfront – there, a parade of groomsmen and their thoroughbreds gradually emerged from the dark street, past the glow of a single streetlamp, and into the ocean. As the sun started to reveal the beautiful blue water, the gorgeous horses, and the Bajan men bathing alongside these incredible animals, everything fell into place’. (Photo by Susan Seubert/National Geographic)
Edit Del
16 Nov 2015 08:13:00, post received 0 comments
Publication archive:
←   →
Popular tags:
All tags
Last searches: