Touching Simply Some Photos: in the Flowers Bob Grutza rides on horseback through his field of sunflowers Tuesday, July 15, 2014 near Maysville, Ky. Grutza has five acres of sunflowers on his property. (Photo by Terry Prather/AP Photo/The Ledger Independent) 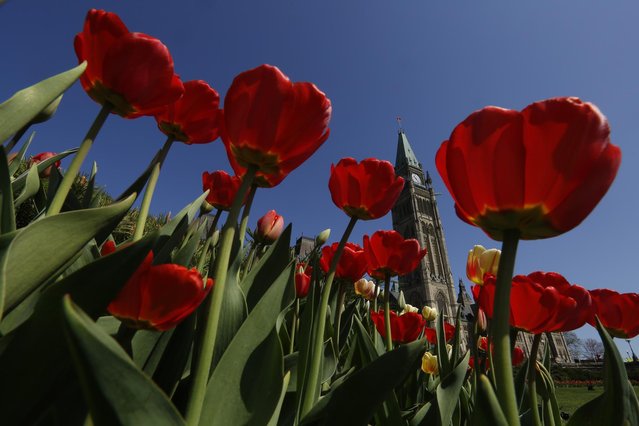 Tulips frame the Peace Tower on Parliament Hill in Ottawa May 12, 2014. (Photo by Chris Wattie/Reuters) 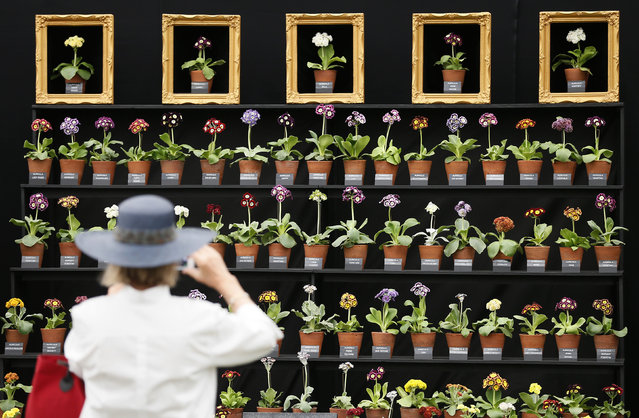 A woman photographs a floral display at the Chelsea Flower Show in London May 19, 2014. (Photo by Stefan Wermuth/Reuters) 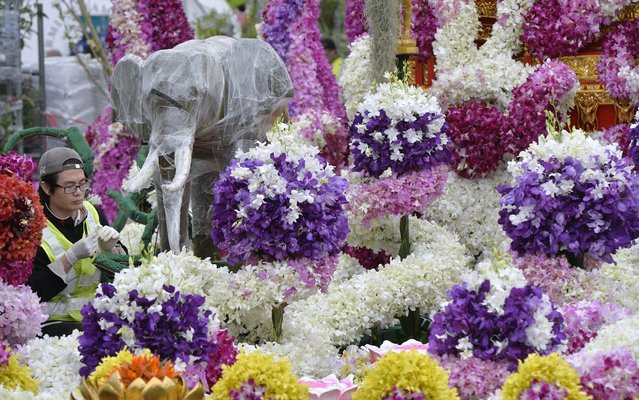 An exhibitor works on a display at the Royal Thai Embassy garden at the Chelsea Flower Show in west London, May 16, 2014. The Royal Horticultural Society Chelsea Flower Show which begins on Monday in the grounds of the Royal Hospital in Chelsea, is the most famous flower show in Britain and will be attended by Queen Elizabeth. (Photo by Toby Melville/Reuters) 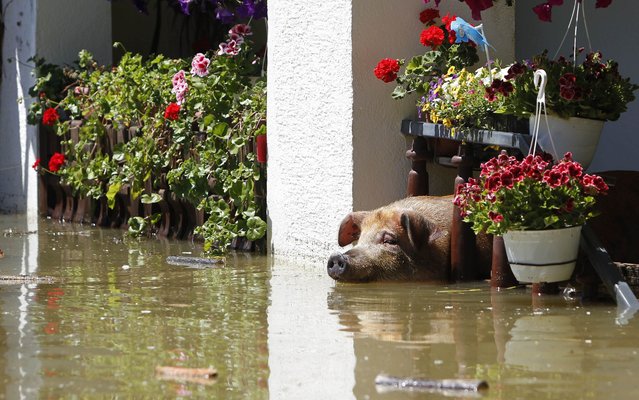 A pig waits to be rescued during heavy floods in Vojskova, May 19, 2014. More than a quarter of Bosnia's four million people have been affected by the worst floods to hit the Balkans in more than a century, the government said on Monday, warning of “terrifying” destruction comparable to the country's 1992-95 war. (Photo by Srdjan Zivulovic/Reuters) 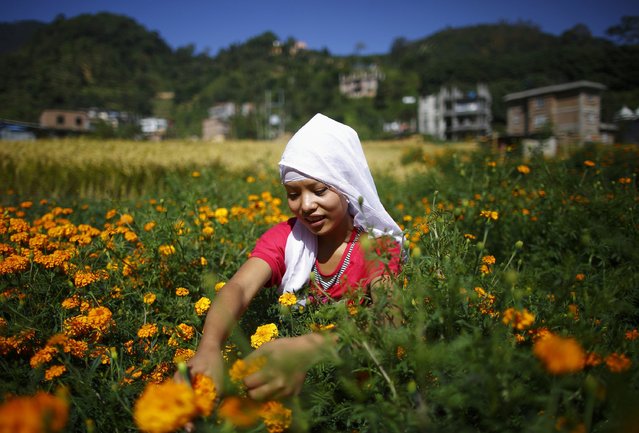 A woman picks marigold flowers in the fields before sending them to the market to be made into garlands which will be offered during prayers for the Tihar festival, also known as Diwali, in Kathmandu October 22, 2014. Hindus all over Nepal are celebrating the Tihar festival during which they worship cows, which are considered a maternal figure, and other animals. Also known as the festival of lights, devotees also worship the goddess of wealth Laxmi by illuminating and decorating their homes using garlands, oil lamps, candles and colourful light bulbs. (Photo by Navesh Chitrakar/Reuters) 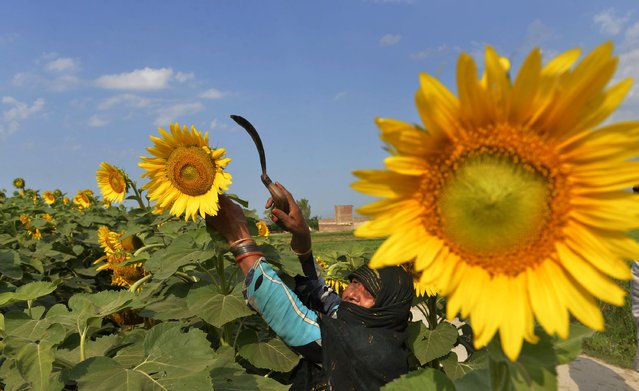 A Pakistani farmer harvests sunflowers in a field in Nankana Sahib on May 17, 2014. According to the federal ministry of national food security and research (economic wing) figures, Pakistans total sunflower acreage stood at 236,001 hectares in 2011-12 with major contribution coming from Sindh 79.9 per cent. (Photo by Arif Ali/AFP Photo) A Painted Lady butterfly (Vanessa cardui) sits on a sunflower on August 4, 2014 in Godewaersvelde. (Photo by Philippe Huguen/AFP Photo) 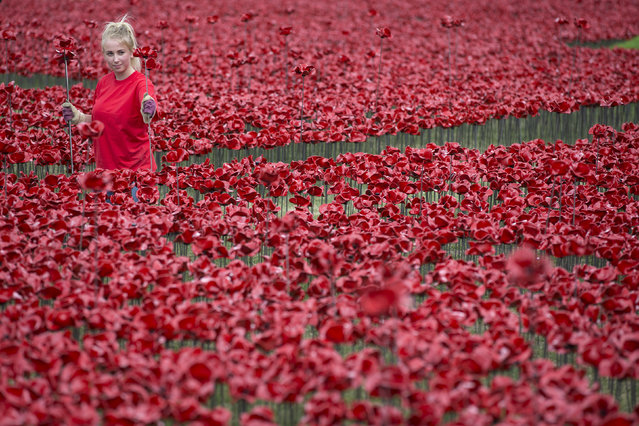 A volunteer assembles a section of an installation entitled “Blood Swept Lands and Seas of Red” by artist Paul Cummins, made up of 888,246 ceramic poppies, in the moat of the Tower of London to commemorate the First World War on July 28, 2014 in London, England. Each ceramic poppy represents an allied victim of the First World War and the display is due to be completed by Armistice Day on November 11, 2014. After Armistice Day each poppy from the installation will be available to buy for 25 GBP. (Photo by Oli Scarff/Getty Images) 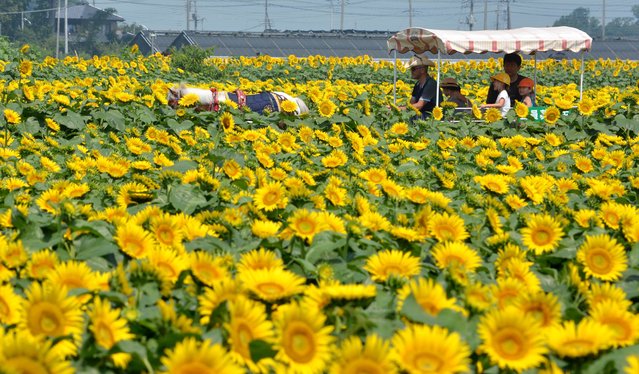 Visitors stroll in a field of sunflowers during a three-day sunflower festival in the town of Nogi, Tochigi prefecture, some 70 kms north of Tokyo on July 27, 2014. A total of some 200,000 sunflowers welcomed guests for the summer festival, an annual draw for the small town. (Photo by Kazuhiro Nogi/AFP Photo) 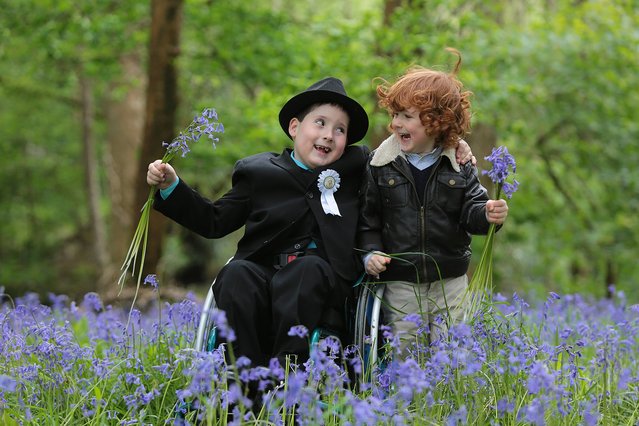 A lovely moment for Tiernan Dineen, who made his Communion on Saturday, playing with his brother Cúan in the blue bells in Muckross, Killarney National Park. (Photo by Valerie O'Sullivan/No Repro Fee) 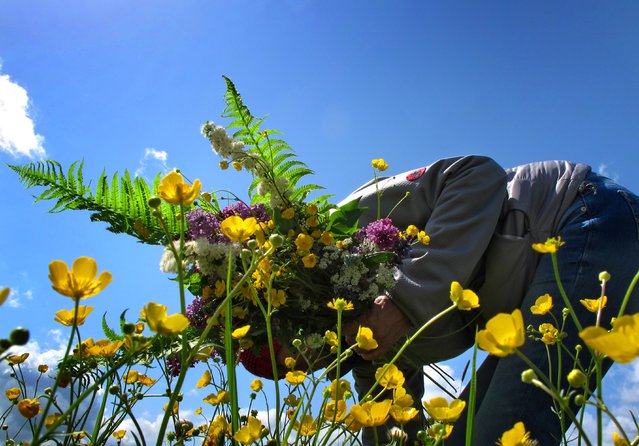 A woman picks flowers from a meadow on May 11, 2014 in Kaufbeuren, southern Germany. (Photo by Karl-Josef Hildenbrand/AFP Photo/DPA) Flowers bloom on a meadow near Jacobsdorf, eastern Germany, on May 20, 2014. Meteorologists forecast warm and sunny weather for the following days in wide parts of the country. (Photo by Patrick Pleul/AFP Photo/DPA) 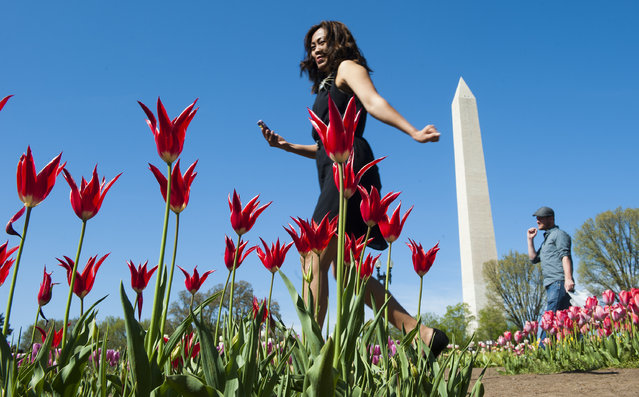 Auy Yadeo of Falls Church wanders through the Floral Library on the north side of the Tidal Basin just off Independence Ave. April 27, 2014 in Washington, DC. The library features nearly 100 different varieties of tulips each spring. (Photo by Katherine Frey/The Washington Post) 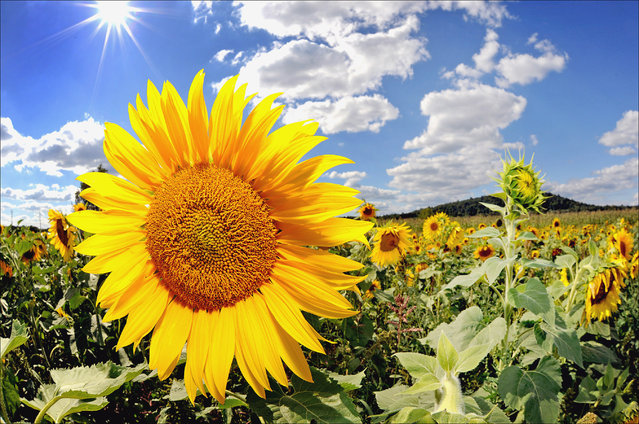 In this Wednesday, September 17, 2014 photo, the sun shines over a field of sunflowers in Walkill, N.Y. (Photo by John DeSanto/AP Photo/Times Herlad-Record) 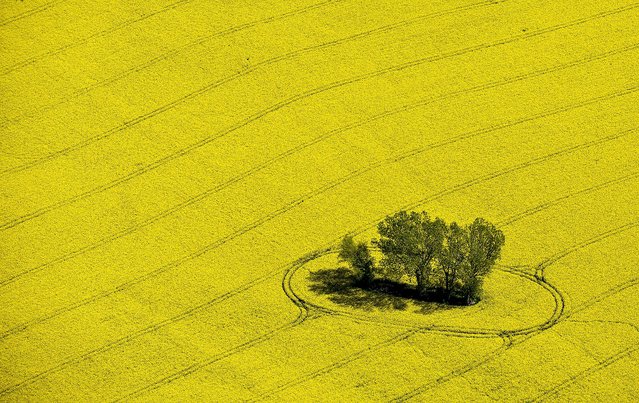