Touching Simply Some Photos: in the Fog 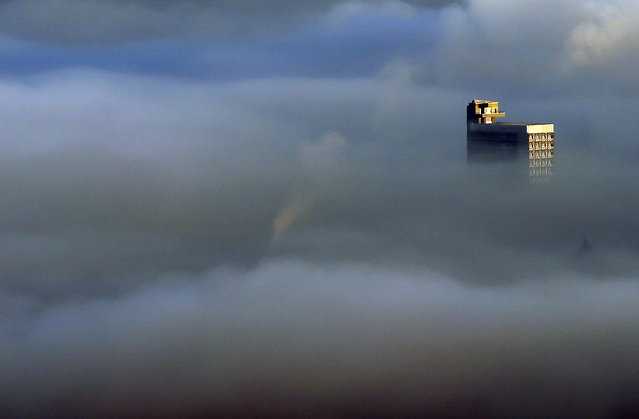 The top of a skyscaper peeps through the fog in the early morning in Bern, Switzerland December 29, 2015. (Photo by Ruben Sprich/Reuters) 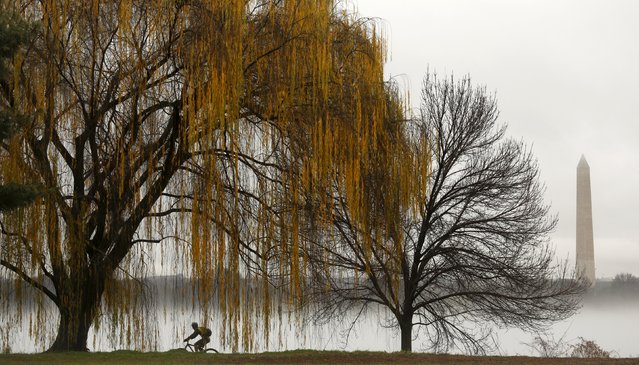 The Washington Monument is seen beyond a heavy fog clinging to the Potomac River as a cyclist makes his way along a riverbank path in Washington December 23, 2015. (Photo by Kevin Lamarque/Reuters) 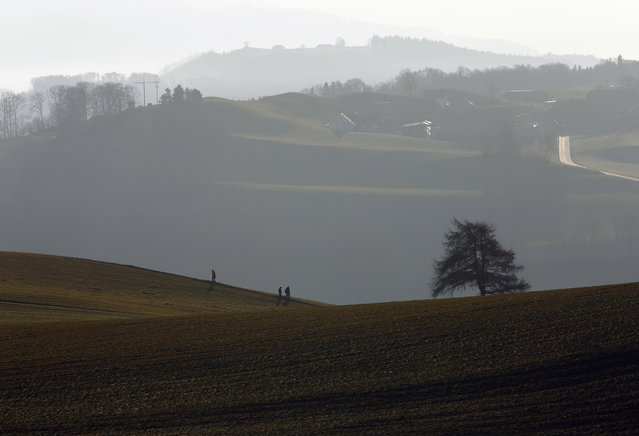 Poeple walk on a field on the Gurten mountain in the early morning in Bern, Switzerland December 29, 2015. (Photo by Ruben Sprich/Reuters) 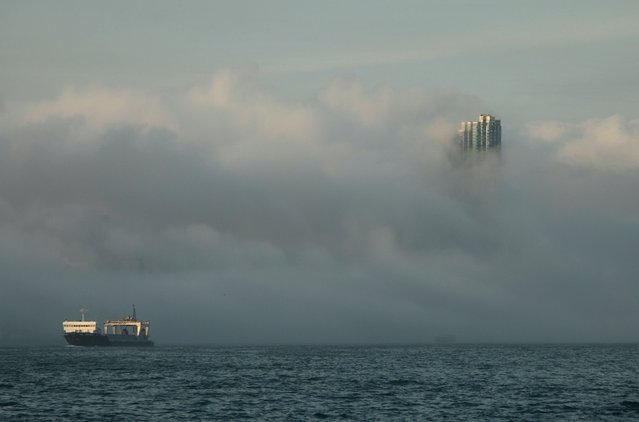 The 67-storey-high "The Masterpiece", one of Hong Kong's most luxurious high-rise residential buildings, is seen during foggy conditions under the influence of a warm maritime airstream at sunset in Hong Kong in this March 21, 2011 file photo. (Photo by Tyrone Siu/Reuters) 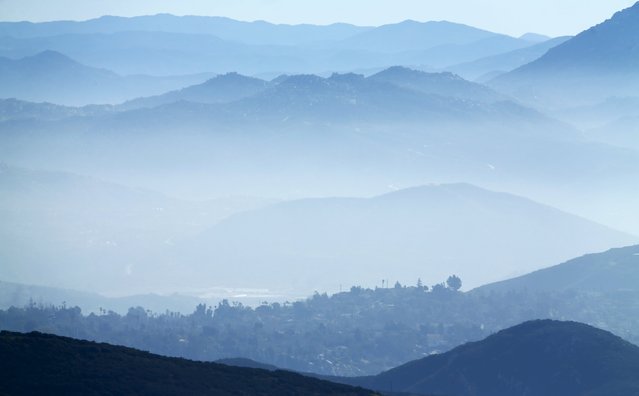 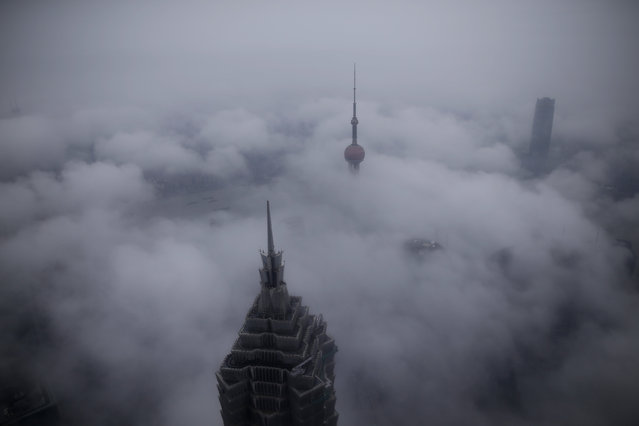 Skyscrapers Oriental Pearl Tower and Jin Mao Tower (L) are seen from the Shanghai World Financial Center, in rain at the financial district of Pudong in Shanghai, China, January 28, 2016. (Photo by Aly Song/Reuters) 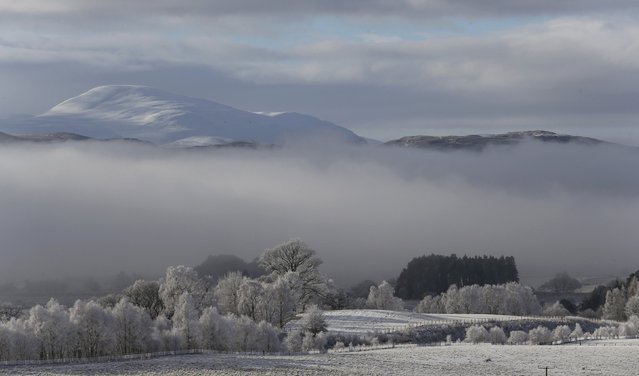 Morning mist sits in the valley of the Spey River near Kincraig Scotland Britain, February 12, 2016. (Photo by Russell Cheyne/Reuters) 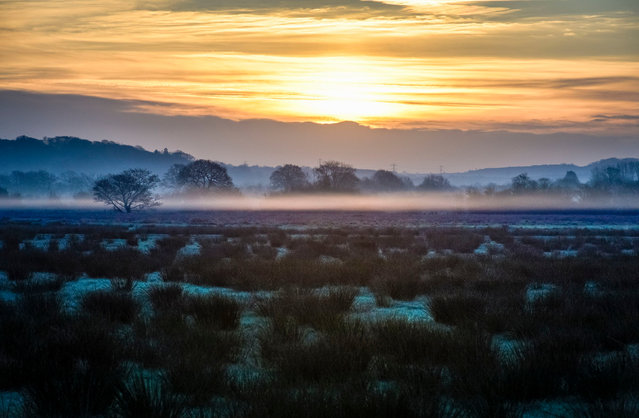 Low mist picks up the colour of the sky just before sunrise on the Somerset Levels near Glastonbury in Somerset, UK on February 17, 2016. (Photo by Ben Birchall/PA Wire) 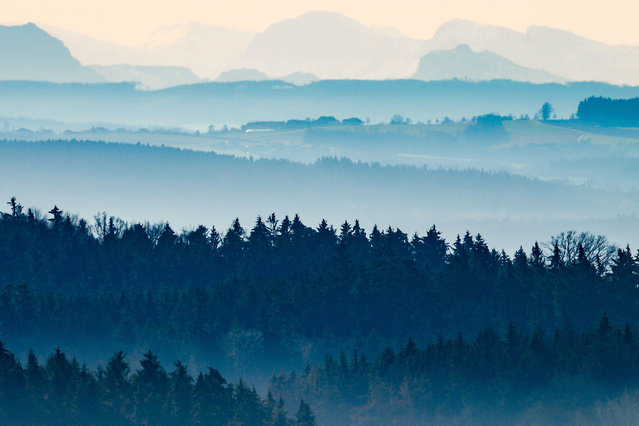 View of the Alps from Sulzbach am Inn, Germany, 22 February 2016. (Photo by Armin Weigel/DPA) 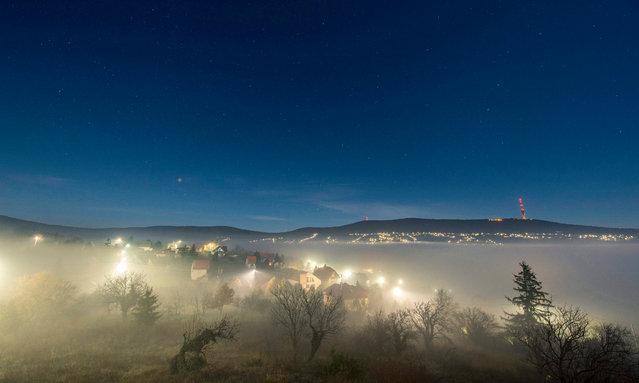 A photo made available on 28 December 2015 shows a starry sky above the fog-covered city of Pecs from Makarteto viewpoint, 232 kms south of Budapest, Hungary, 27 December 2015. (Photo by Tamas Soki/EPA) 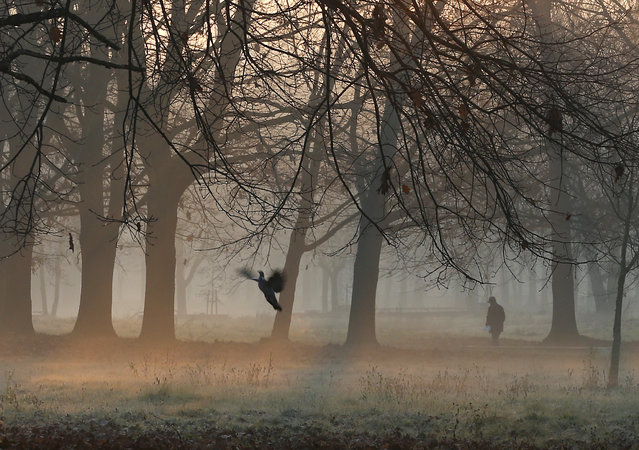 A man walks through the morning mist in a park in Rozzano, near Milan, northern Italy, Thursday, December 17, 2015. (Photo by Antonio Calanni/AP Photo) 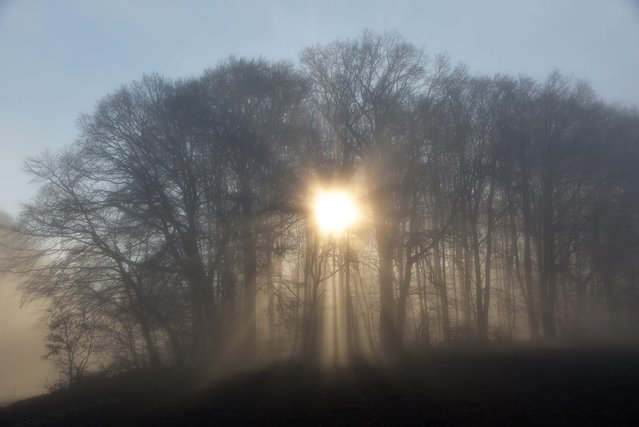 The sun rises behind a forest shrouded in fog near Baunatal, Germany, 08 December 2015. (Photo by Uwe Zucchi/EPA) 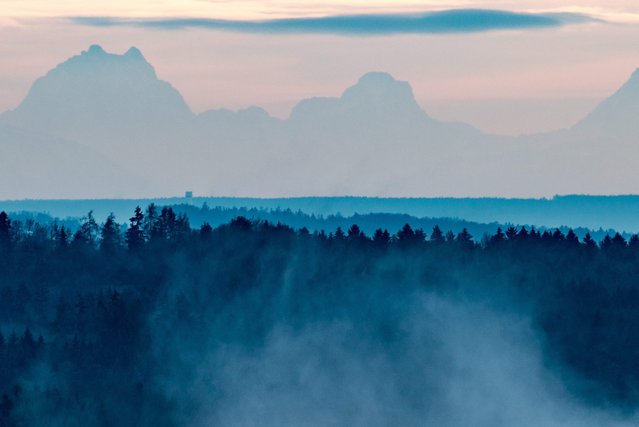 An early morning mist veils the view from the Bavarian Forest onto the Alps near the town of Lalling, Bavaria, Germany, December 12, 2015. (Photo by Armin Weigel/EPA) 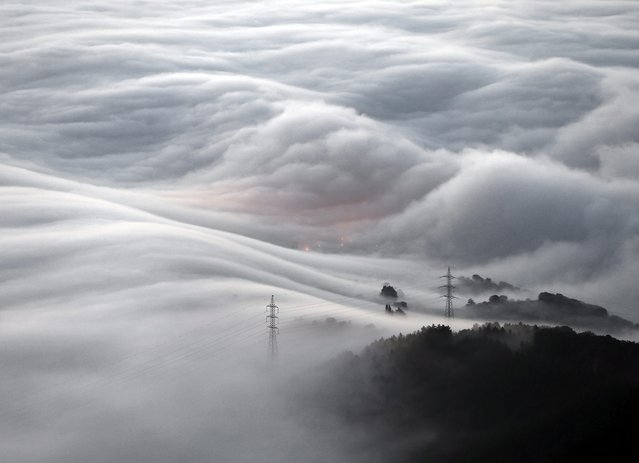 A general view of a mountainous landscape in Pamplona covered in a thick blanket of smog on 23 December 2015, in Pamplona, northern Spain. (Photo by Jesus Diges/EPA) 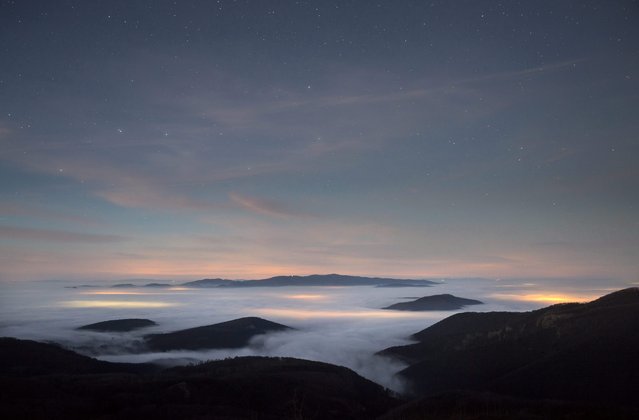 A photo made available on 28 December 2015 at Dobogoko hikers' lookout spot shows peaks of the Visegradi Mountain rising above a blanket of fog, which is illuminated from beneath by the lights emanating from settlements near Pilisszentkereszt, 30 kms northwest of Budapest, Hungary, 27 December 2015. (Photo by Balazs Mohai/EPA) 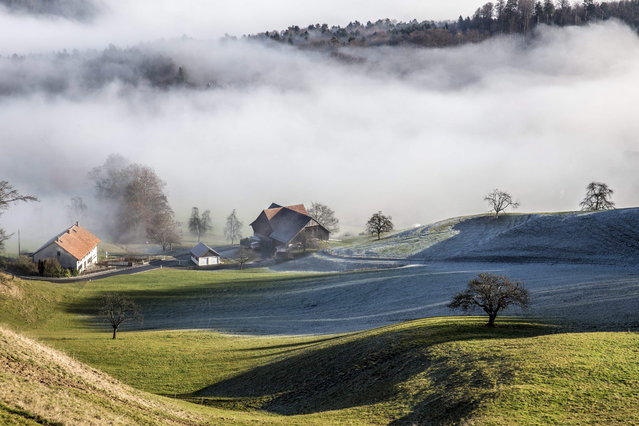 A Swiss landscape is covered with fog in Langnau am Albis, near Zuerich, Switzerland, 29 December 2015. (Photo by Patrick B. Kraemer/EPA) 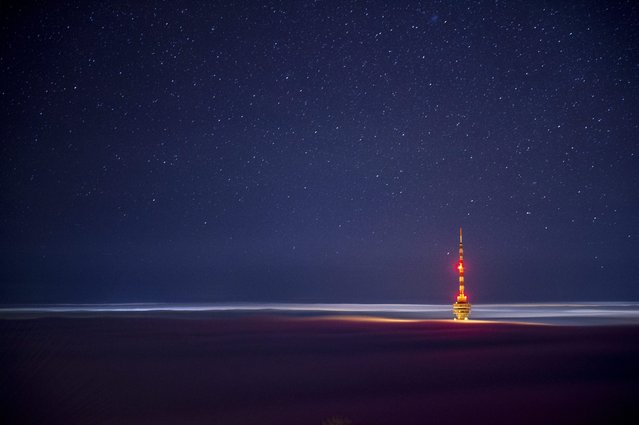 In this Monday, December 7, 2015 photo a television transmission tower is seen in a huge cloud of fog in Pecs, 196 kms south of Budapest, Hungary. The photo was taken from the top of the 611-meter high Tubes Mountain belonging to the city. (Photo by Tamas Soki/MTI via AP Photo) 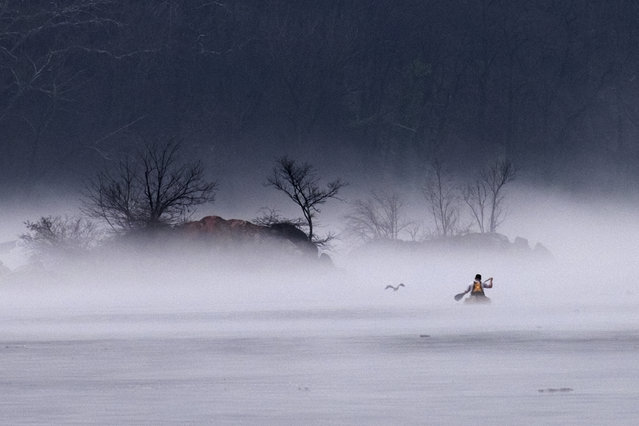 Bill Woodruff of Alexandria paddles along the Potomac on Christmas day in Washington, DC, on December 25, 2015. The weather was unseasonably warm and foggy. (Photo by Bonnie Jo Mount/The Washington Post) 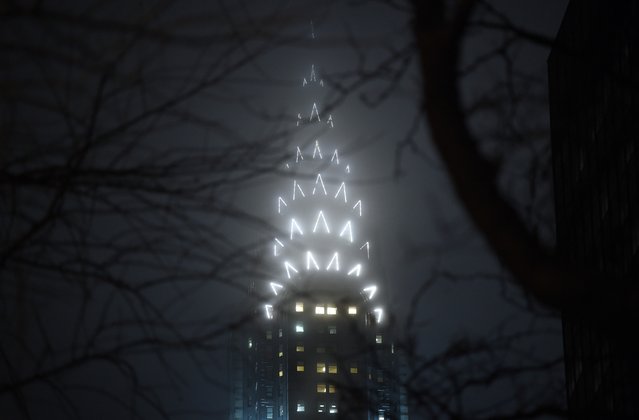