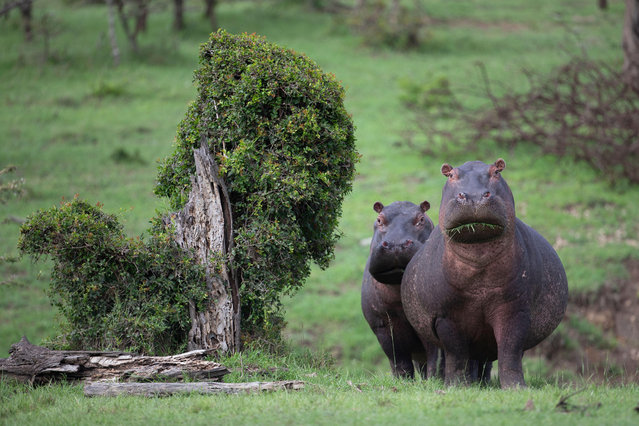 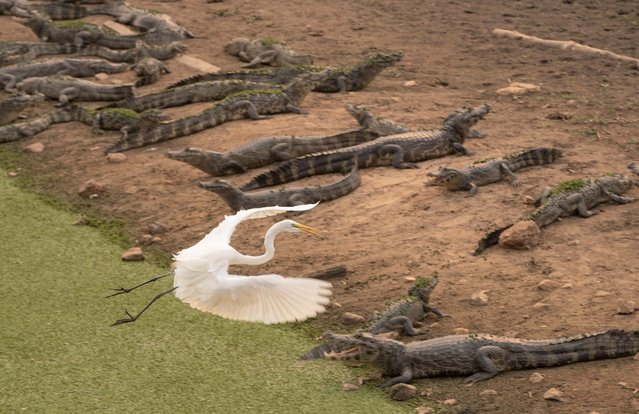 In this September 14, 2020 file photo, an egret flies over a bask of caiman on the banks of the almost dried up Bento Gomes river, in the Pantanal wetlands near Pocone, Mato Grosso state, Brazil. The Pantanal is the world's largest tropical wetlands, popular for viewing jaguars, along with caiman, capybara and more. In 2020 the Pantanal was exceptionally dry and burning at a record rate. (Photo by Andre Penner/AP Photo/File) 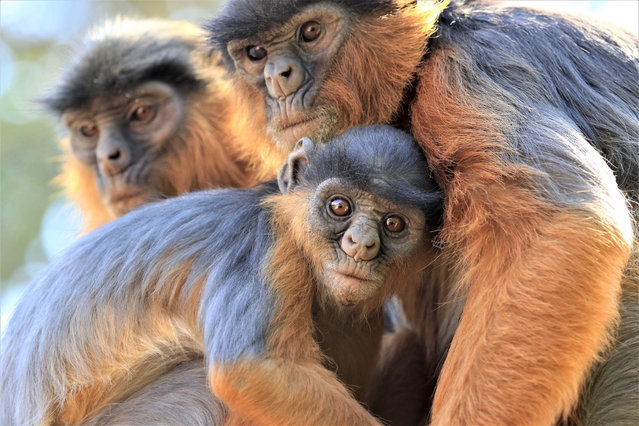 Elsewhere in Africa, an estimated 53% of primate species are under threat of extinction. This includes the Temminck’s red colobus species seen here. (Photo by Mic Mayhew/IUCN/PA Wire Press Association) 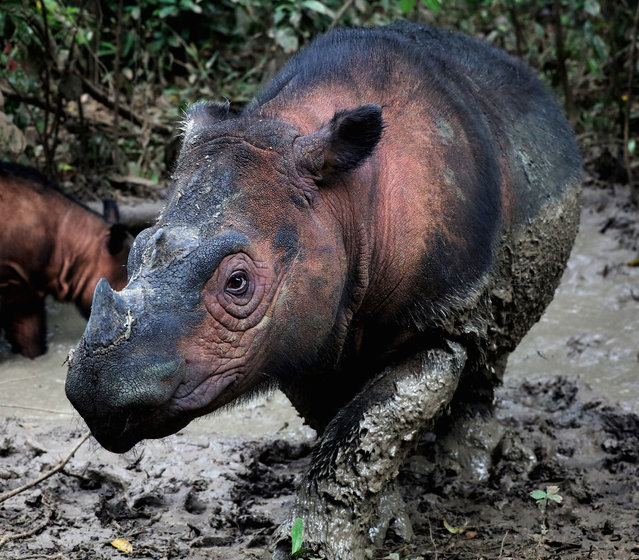 A Sumatran rhino, one of the most endangered mammals on Earth. The sixth mass extinction of wildlife on Earth is accelerating, according to an analysis by scientists, who warn it may be a tipping point for the collapse of civilisation. More than 500 species of land animals were found to be on the brink of extinction and likely to be lost within 20 years. (Photo by Rhett Buttler/Mongabay/PA Wire) 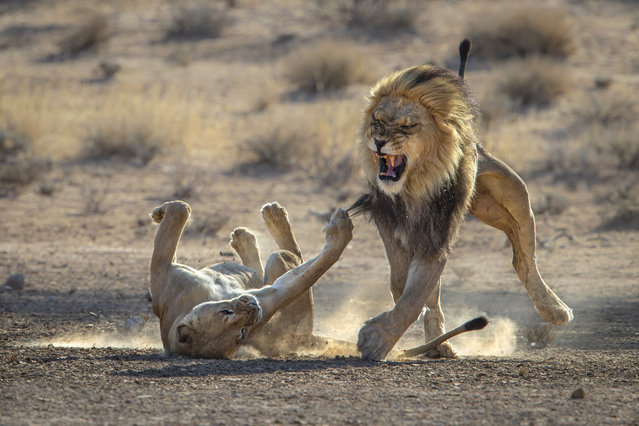 A lioness takes a swipe at a male in the Kgalagadi Transfrontier wildlife preserve in South Africa in May 2021. (Photo by Gonnie Myburgh/Cover-Images.com) 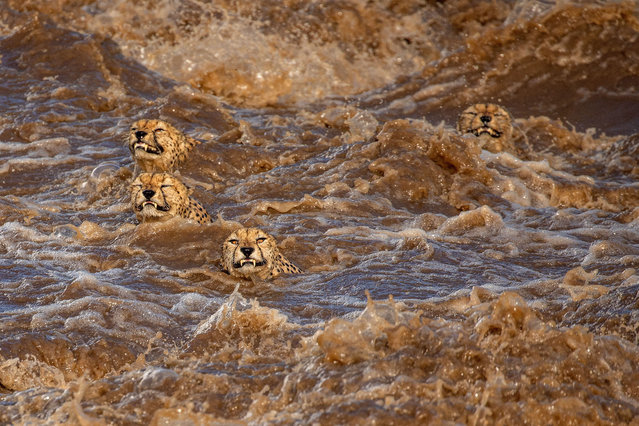 A coalition of cheetahs struggle to keep their heads above water after heavy storms caused nearby rivers to burst their banks at the Maasai Mara national reserve. (Photo by Buddhilini De Soyza/MediaDrumImages) 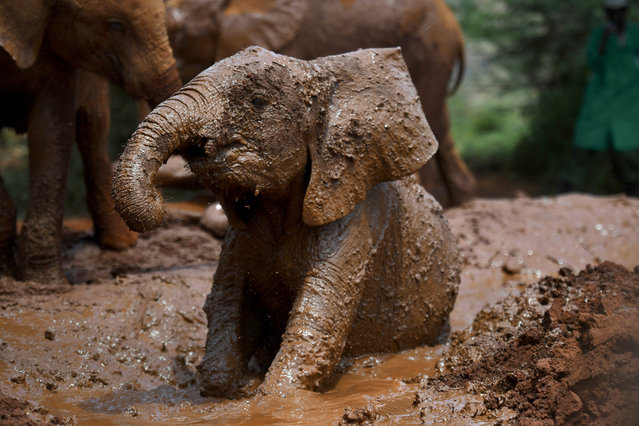 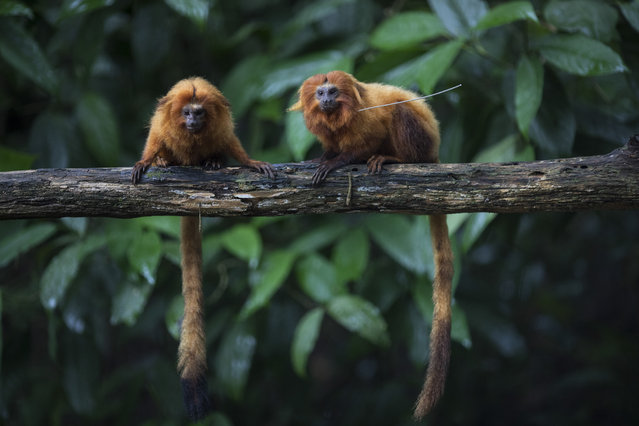 Golden lion tamarins sit on a tree branch in the Atlantic Forest in Silva Jardim, state of Rio de Janeiro, Brazil, Monday, April 15, 2019. “The Atlantic rainforest is one of the planet’s most threatened biomes, more than 90 percent of it was deforested”, said Luis Paulo Ferraz of the nonprofit group called Save the Golden Lion Tamarin. “What is left is very fragmented”. (Photo by Leo Correa/AP Photo) 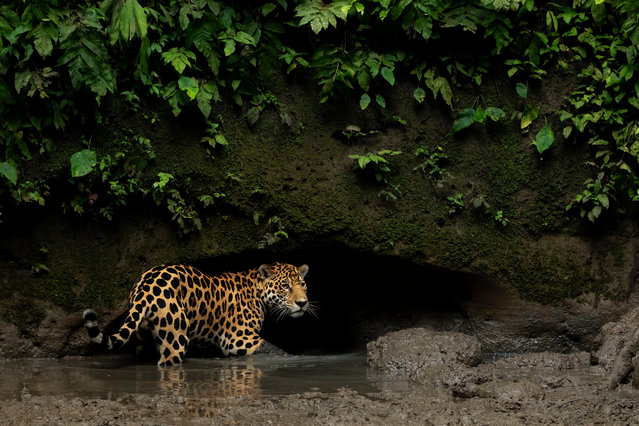 A jaguar in Yasuni National Park, Orellana. The loss of habitat is the biggest threat to jaguars in Ecuador, particularly along the coast, where more than 70% of the original forest cover has been lost. The vast majority of this destruction has taken place over the past 50 years with the expansion of the logging and agriculture industries, including coffee, cacao, palm oil and bananas, one of the country’s largest agriculture exports. (Photo by Lucas Bustamante/NPL) 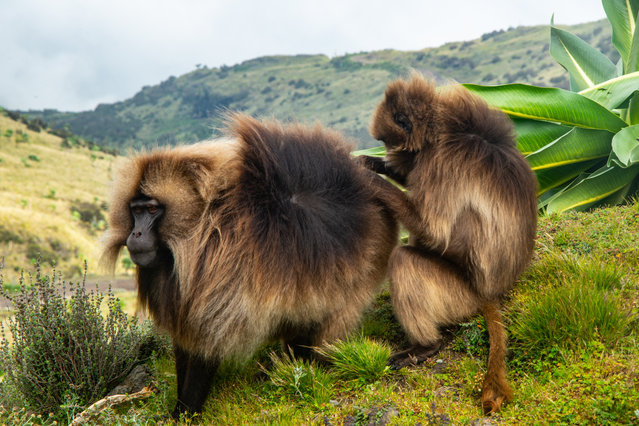 Gelada baboons in the Simien Mountains in northern Ethiopia, one of the oldest natural Unesco world heritage sites. The species is endemic to Ethiopia. (Photo by Henning Neuhaus) 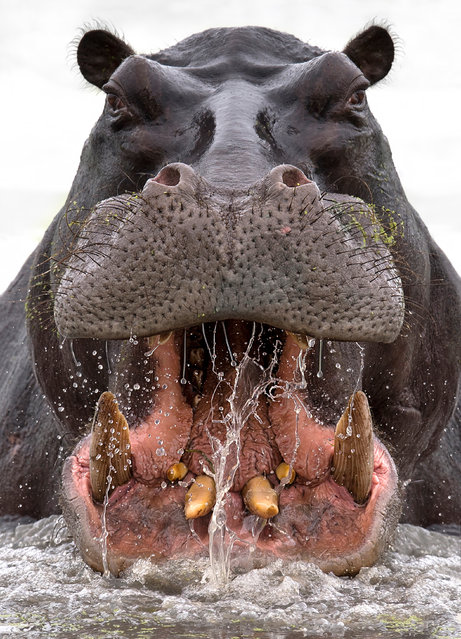 A male hippopotamus roars at the camera of wildlife photographer Dale Morris as he keeps his distance in a safari vehicle positioned behind a termite mound in the Okavango Delta, Botswana. Hippos are responsible for more than 500 deaths a year – far more than lions, tigers or bears. (Photo by Dale Morris/MediaDrumImages) 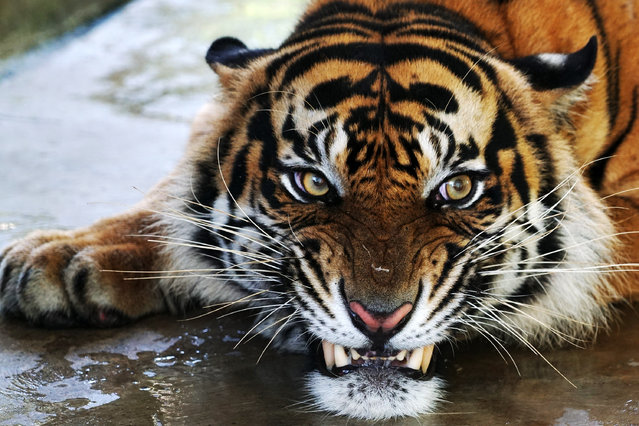 A rescued male tiger named Atan Bintang, awaits its release to its original habitat. The animal has been residing at the Sumatran Tiger Rehabilitation Center in Dharmasraya, west Sumatra, Indonesia. (Photo by Jefri Tarigan/Jefta Images/Barcroft Media) 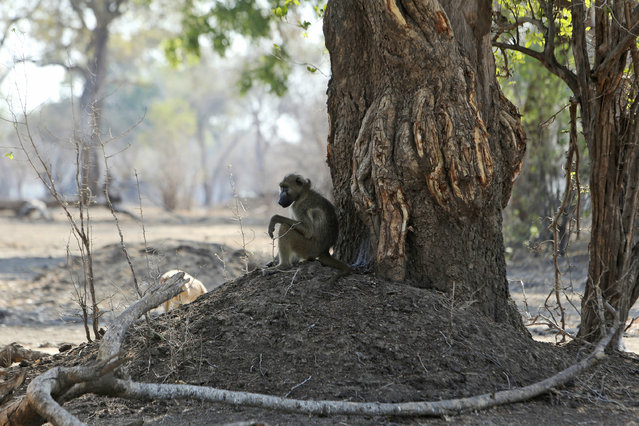 In this October 27, 2019, photo, a baboon sits under a tree in Mana Pools National Park, Zimbabwe. Elephants, zebras, hippos, impalas, buffaloes and many other wildlife are stressed by lack of food and water in the park, whose very name comes from the four pools of water normally filled by the flooding Zambezi River each rainy season, and where wildlife traditionally drink. The word “mana” means four in the Shona language. (Photo by Tsvangirayi Mukwazhi/AP Photo) 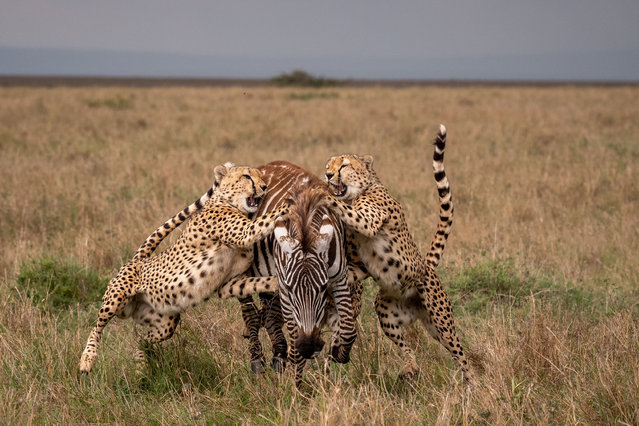 Cheetahs work together to bring down a zebra in Kenya, 2021. The doomed escape sequence captured the zebra fleeing from the predators’ stealthy pursuit and delivering an epic karate kick blow in their direction in a desperate attempt at self-defence. The equine’s escape was all in vain as the group of cheetahs swarmed in and dragged their meal to the ground. (Photo by Yarin Klein/Mediadrumimages) 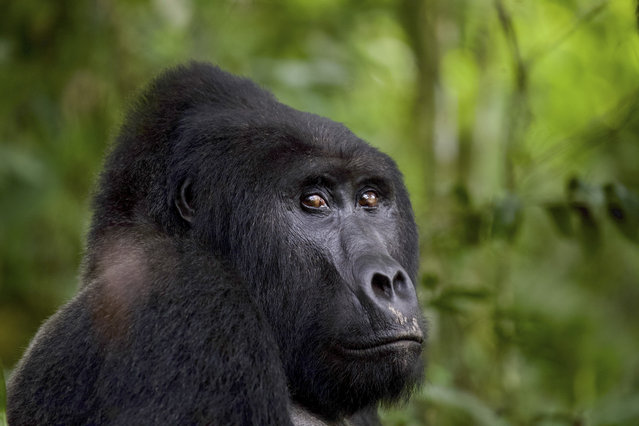 Silverback gorilla Rafiki in Uganda’s Bwindi Impenetrable Forest national park in 2019. A court jailed a man for 11 years for offences that include the killing of the beloved mountain gorilla. (Photo by Joshua Guenther/AP Photo) 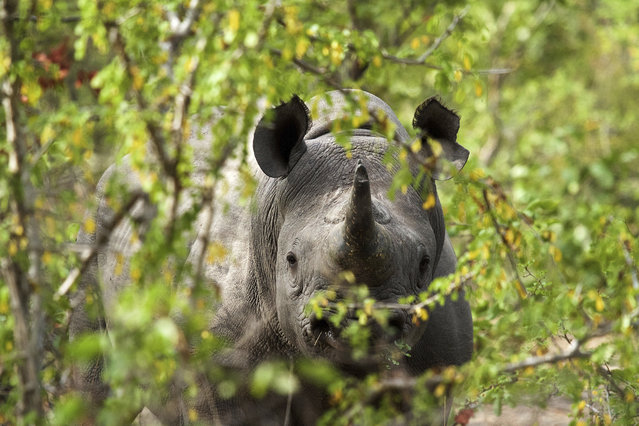 This 2016 photo provided by African Parks shows a black rhino under protection in Malawi's Liwonde National Park, managed by African Parks in partnership with the Department of National Parks and Wildlife. In many African countries, wildlife tourism provides much of the money to maintain parks where vulnerable species such as elephants, lions, rhinos and giraffes live. But after the new coronavirus struck, “the entire international tourism sector basically closed down overnight in March”, said Peter Fearnhead, the CEO of nonprofit African Parks, which manages 17 national parks and protected areas in 11 countries. (Photo by Frank Weitzer/African Parks via AP Photo) 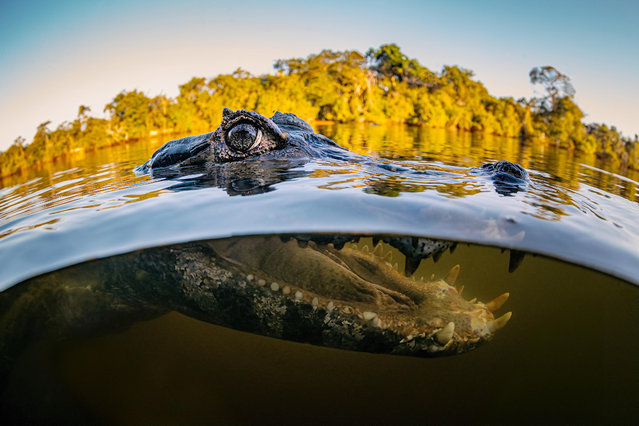