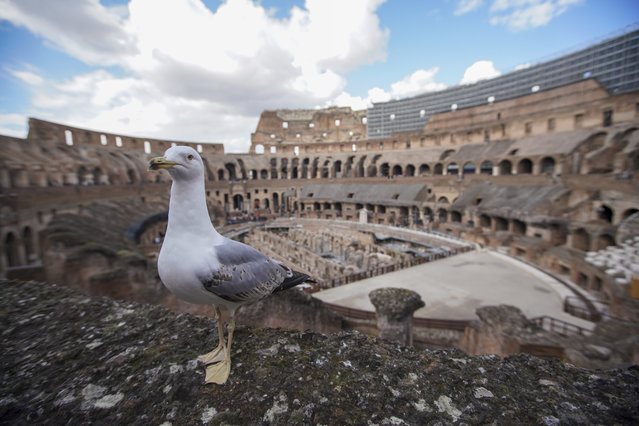 A view of the Colosseum, in Rome, Saturday, March 7, 2020. With the coronavirus emergency deepening in Europe, Italy, a focal point in the contagion, risks falling back into recession as foreign tourists are spooked from visiting its cultural treasures and the global market shrinks for prized artisanal products, from fashion to design. (Photo by Andrew Medichini/AP Photo) 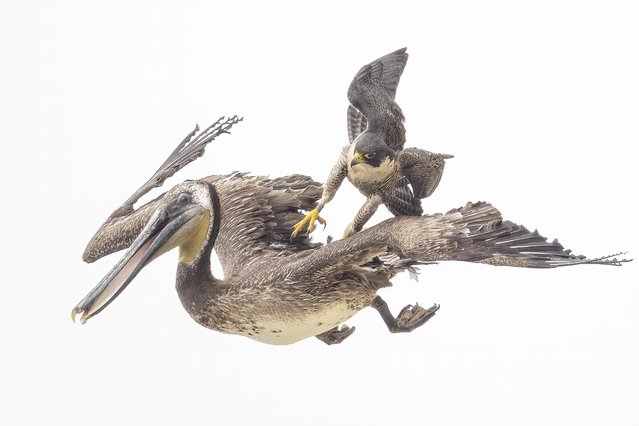 A protective peregrine falcon attacks a pelican who had got too close to his nest of chicks in Torrey Pines Beach in San Diego, California in May 2022. (Photo by Phoo Cahn/Media Drum World) 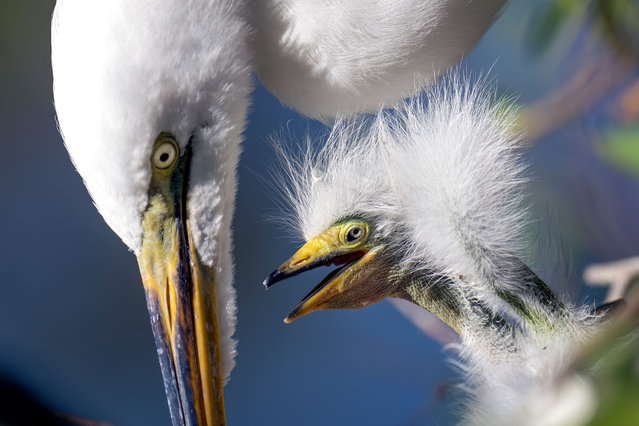 A baby great egret in a nest asking mom for food in Kissimmee, Florida on March 26, 2022. (Photo by Ronen Tivony/SOPA Images/Rex Features/Shutterstock) 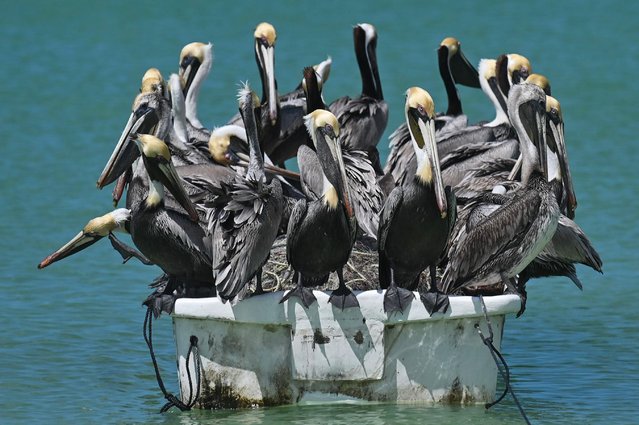 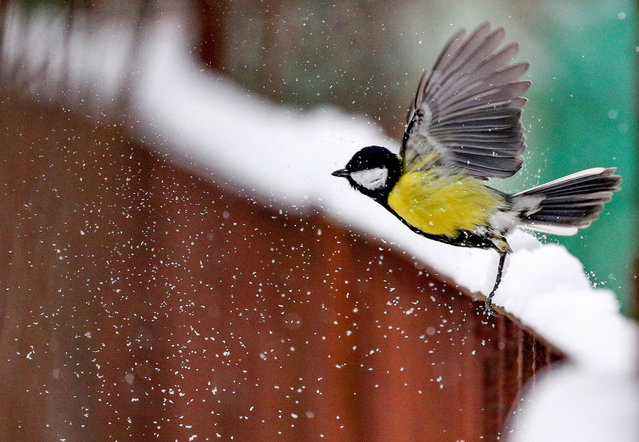 A great tit in flight in the town of Yurevets, 159km northeast of Ivanovo, Russia on December 26, 2020. (Photo by Vladimir Smirnov/TASS) 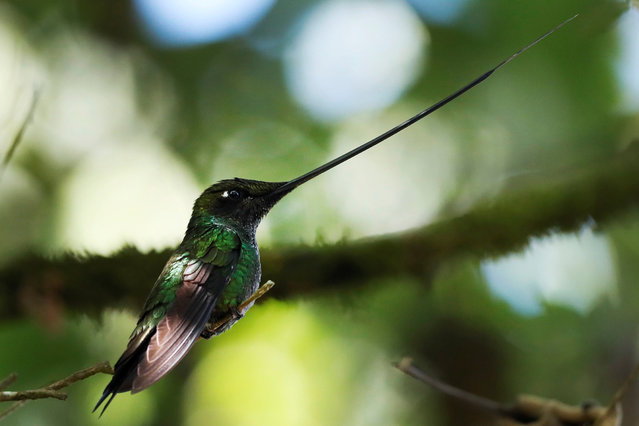 View of a sword-billed hummingbird at the “El Paramuno” ecological trail in Bogota, Colombia, 09 March 2021. A multitude of species of hummingbirds can be found on the hill of Monserrate, a green enclave in the middle of the busy capital city of Bogota. (Photo by Carlos Ortega/EPA/EFE) 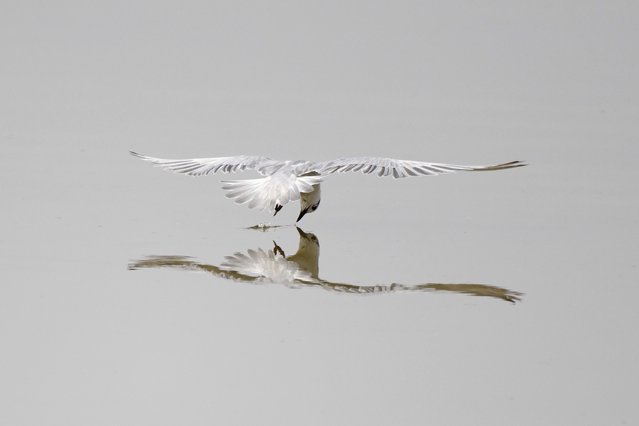 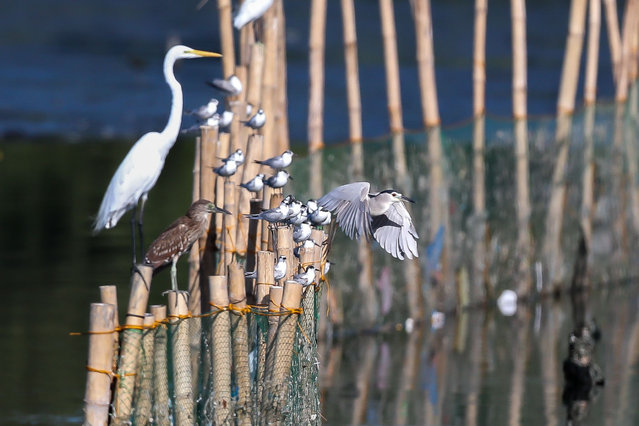 Various migratory birds are seen perched on bamboo stilts at the Las Pinas-Paranaque Wetland Park in Las Pinas City, the Philippines on March 3, 2021. The World Wildlife Day is observed on March 3 every year to raise the awareness on the world's wild animals and plants. (Photo by Xinhua News Agency/Rex Features/Shutterstock) 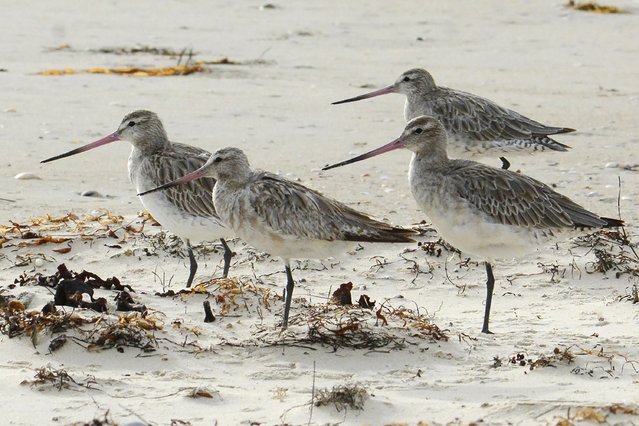 Bar-tailed godwits stand on the beach at Marion Bay in Australia's Tasmania state on February 17, 2018. A young bar-tailed godwit appears to have set a non-stop distance record for migratory birds by flying at least 13,560 kilometers (8,435 miles) from Alaska to the Australian state of Tasmania, a bird expert said Friday, Oct. 28, 2022. (Photo by Eric Woehler via AP Photo) 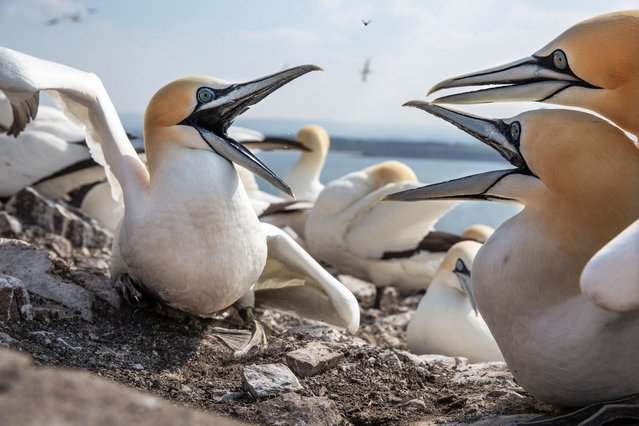 The world’s largest colony of northern gannets squabble, mate and build nests on Bass Rock in Scotland in April 2021. At this time of year the birds are beginning to nest and mate as the breeding season gets under way. (Photo by Murdo MacLeod/The Guardian) 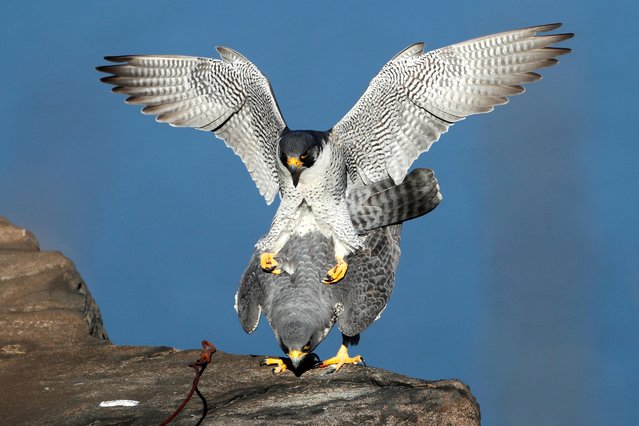 A pair of peregrine falcons mate while perched on the Palisades Cliffs above the Hudson River at State Line Lookout Park in Alpine, New Jersey, U.S., March 15, 2021. (Photo by Mike Segar/Reuters) 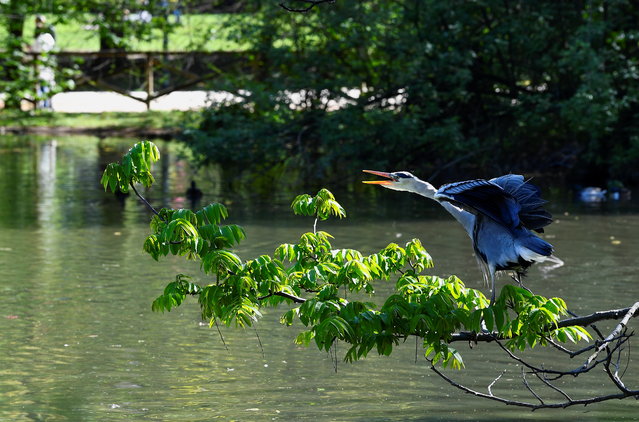 A grey heron is seen at the Sempione park, after Lombardy was downgraded from a red to an orange zone, loosening the coronavirus disease (COVID-19) restrictions including allowing non-essential shops to re-open, in Milan, Italy, April 13, 2021. (Photo by Flavio Lo Scalzo/Reuters) 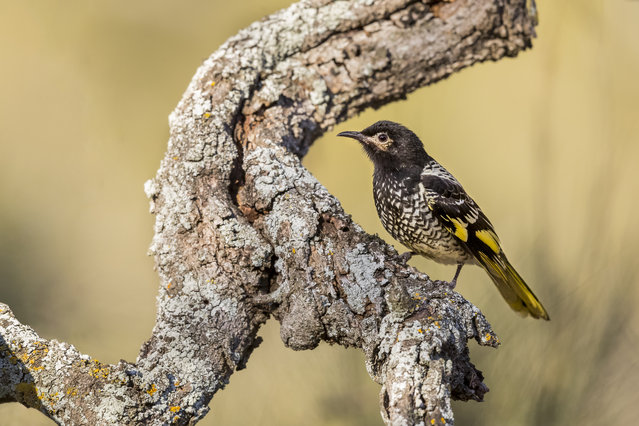 This 2017 photo provided by David Stowe shows a female regent honeyeater in Capertee National Park, New South Wales, Australia. There are only 300 to 400 of the birds left in the wild, says Ross Crates, an ecologist at Australia National University. They are dependent on nectar from certain eucalyptus tree blossoms, but the dry weather has meant that many trees are producing no nectar. (Photo by David Stowe/davidstowe.com.au via AP Photo) 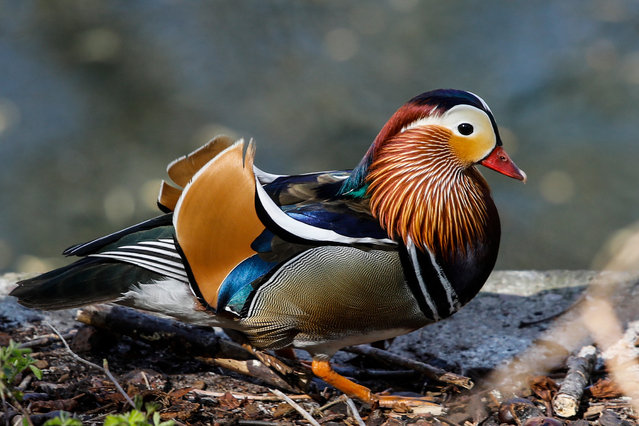 A male Mandarin duck walks along the Landwehr canal in Berlin's Kreuzberg district as the sun shines on Easter Sunday, April 12, 2020. (Photo by David Gannon/AFP Photo) 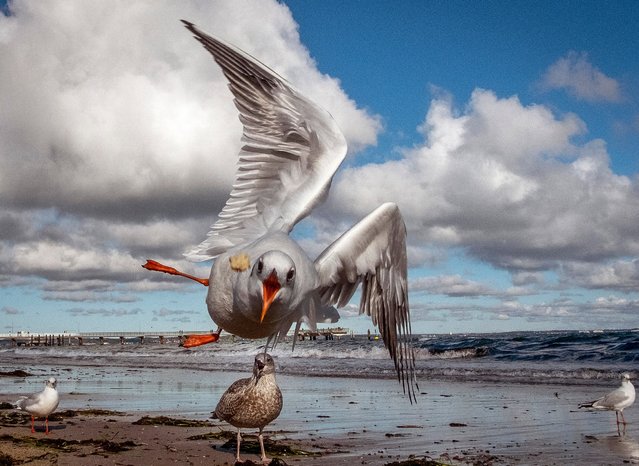 A seagull flies to catch a piece of bread thrown by a tourist at the Baltic Sea in Timmendorfer Strand, northern Germany, Saturday, October 17, 2020. (Photo by Michael Probst/AP Photo) 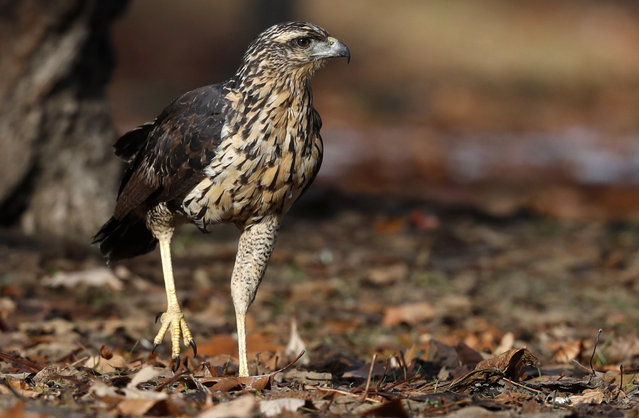 A great black hawk, a native of Central and South America, prowls the grounds of Deering Oaks Park, Friday, November 30, 2018, in Portland, Maine. Audubon naturalist Doug Hitchcox said the young bird appeared to be in good health and in the process of molting. Maine residents sometimes sees rare birds, he said, but “this is one for the record books”, and it made for a moment they wouldn't forget. (Photo by Robert F. Bukaty/AP Photo) 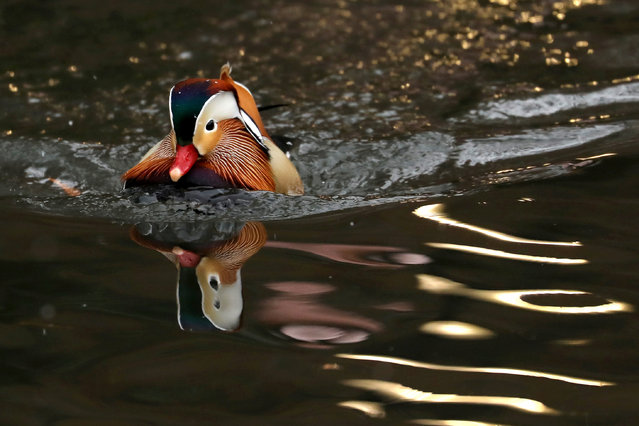 A Mandarin Duck, a native species to East Asia, swims in The Pond in Central Park in Manhattan in New York City, New York, U.S., December 13, 2018. (Photo by Mike Segar/Reuters) 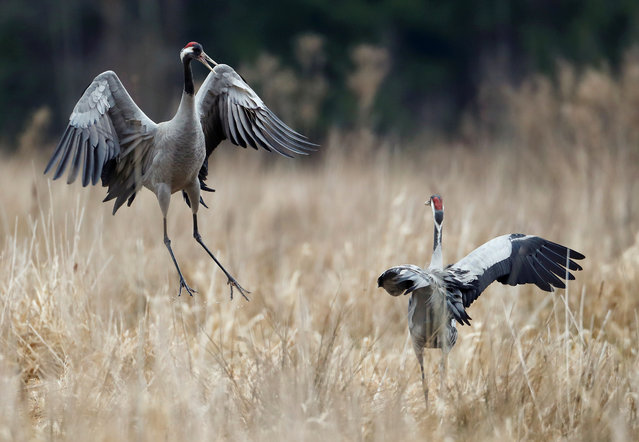 Cranes court at a mating ground in a marsh near the village of Kulyashy, Belarus on March 19, 2019. (Photo by Vasily Fedosenko/Reuters) 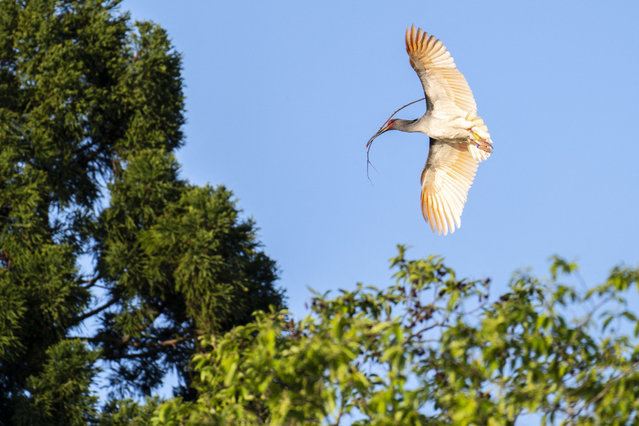 This picture taken on May 8, 2022 shows a wild toki bird in flight on Sado island, Niigata prefecture. In just under two decades, Sado's population of wild toki has gone from zero to nearly 500, thanks to international diplomacy, scientific research and an agricultural revolution on the island off Japan's west coast. (Photo by Charly Triballeau/AFP Photo) 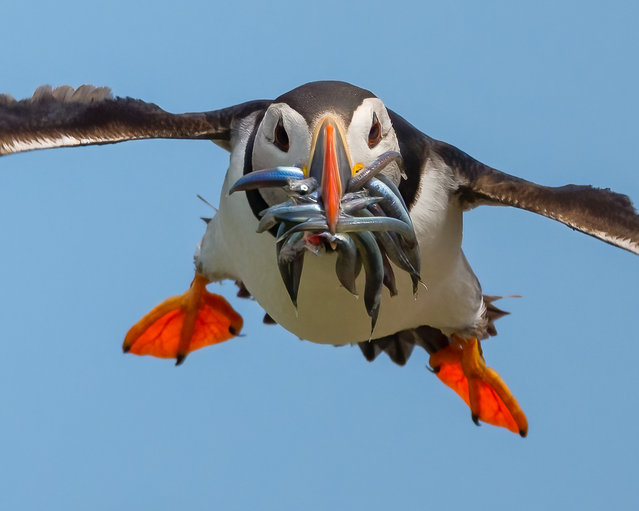