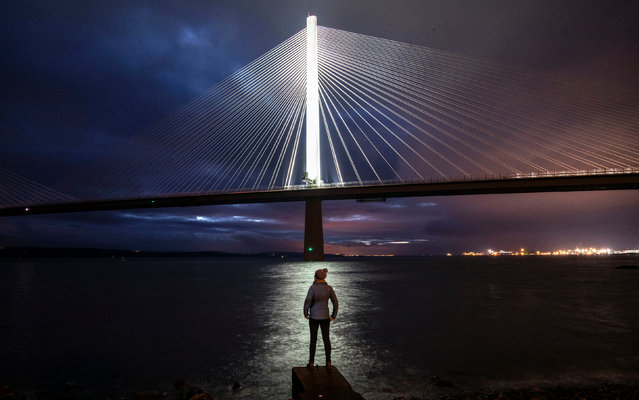 The testing of new lighting on the Queensferry Crossing which spans the Firth of Forth in Edinburgh, Scotland on December 26, 2018. Once fully operational it will include uplighting for each of the main towers and strip lighting along the deck edge of the bridge. (Photo by Jane Barlow/PA Wire Press Association) 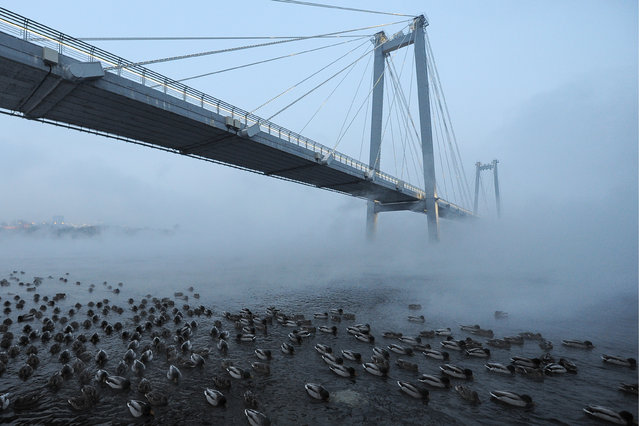 A view of Vinogradovsky Bridge, a cable-stayed footbridge over the Yenisei River, linking the Strelka District and Tatyshev Island in Krasnoyarsk, Russia on December 3, 2018. (Photo by Kirill Kukhmar/TASS) 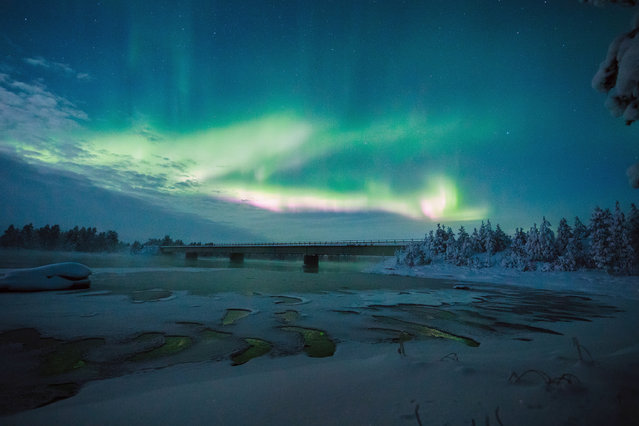 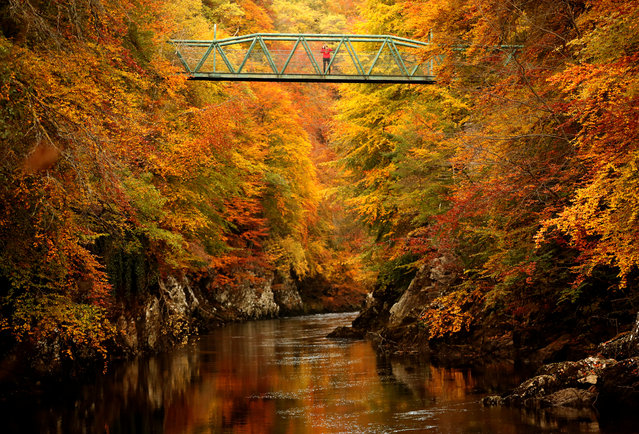 A woman stands on the footbridge over the river Garry near Pitlochry, Scotland, Britain on October 10, 2018. (Photo by Russell Cheyne/Reuters) 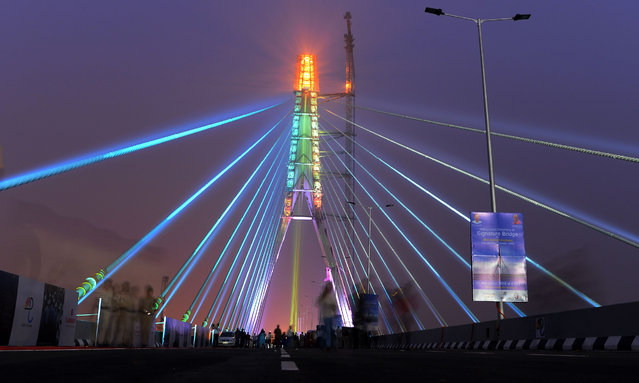 A view of the under- construction cable- stayed “Signature Bridge” after its inauguration ceremony in New Delhi on November 4, 2018. (Photo by Sajjad Hussain/AFP Photo) 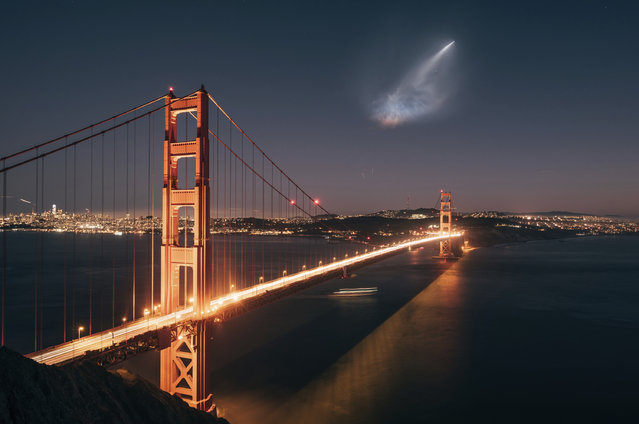 In this photo taken Sunday, October 7, 2018 and provided by Justin Borja, a SpaceX Falcon 9 rocket launch is seen in the distance over the Golden Gate Bridge near Sausalito, Calif. When SpaceX launched a rocket carrying an Argentine Earth-observation satellite from California, both the night sky and social media lit up. People as far away as Phoenix and Sacramento posted photos of the rocket returning to its launch site on Sunday night in what was the first time SpaceX landed a first-stage booster back at its launch site at Vandenberg Air Force Base. (Photo by Justin Borja via AP Photo)

Buildings are seen in heavy fog at Guangji Bridge on March 21, 2019 in Chaozhou, Guangdong Province of China. (Photo by Lin Wenqiang/VCG via Getty Images) 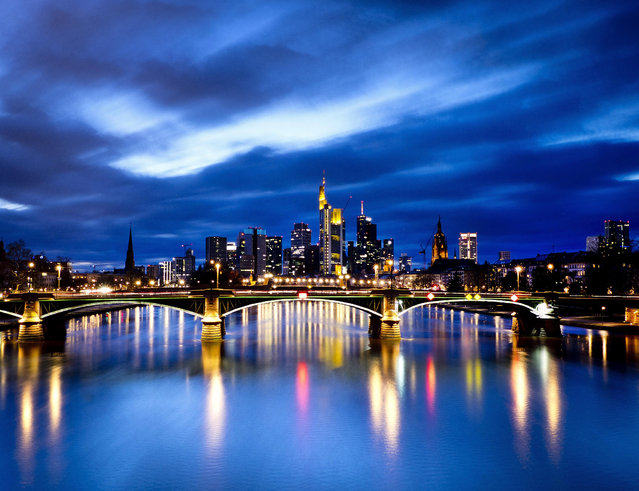 Lights of a bridge are reflected in the river Main with the buildings of the banking district in background in Frankfurt, Germany, Saturday, March 16, 2019. (Photo by Michael Probst/AP Photo) 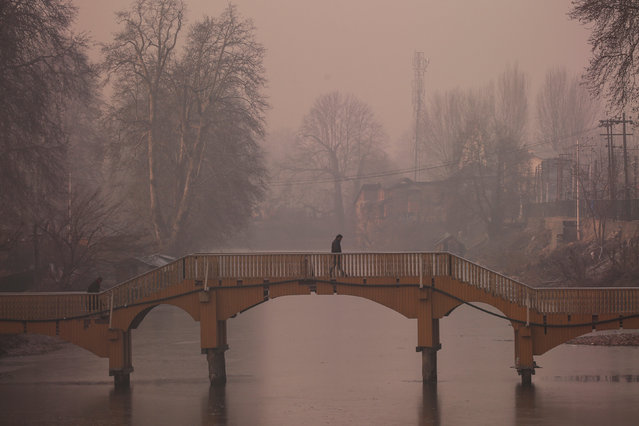 A man walks on a footbridge over the partially frozen of Dal lake on a cold winter morning in Srinagar December 31, 2018. (Photo by Danish Ismail/Reuters) 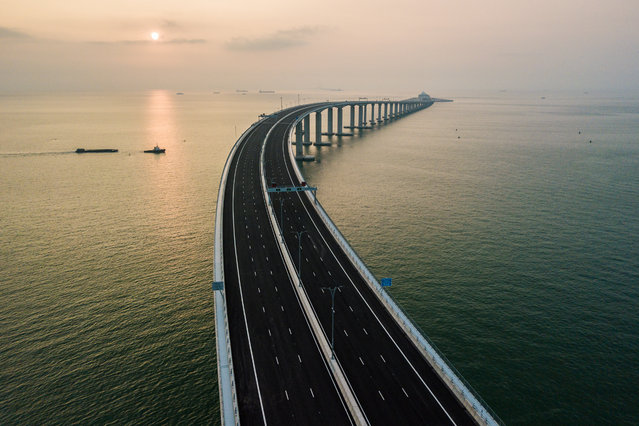 An aerial view taken on October 22, 2018, shows a section of the Hong Kong-Zhuhai-Macau Bridge (HKZM) in Hong Kong. The world's longest sea-bridge connecting Hong Kong, Macau and mainland China will be launched October 23, at a time when Beijing seeks to tighten its grip on its territories. (Photo by Anthony Wallace/AFP Photo) 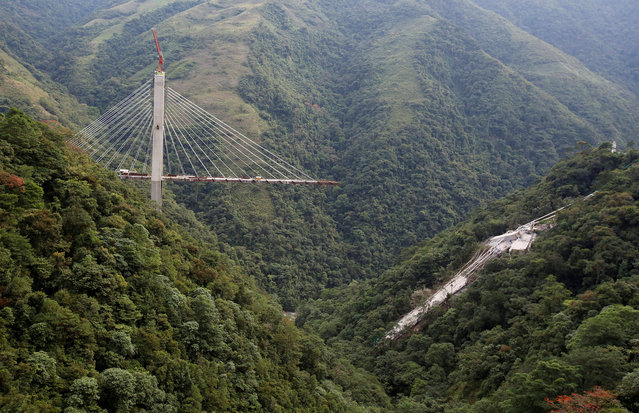 View of a bridge under construction that collapsed leaving dead and injured workers in Chirajara near Bogota, Colombia January 15, 2018. (Photo by Jaime Saldarriaga/Reuters) 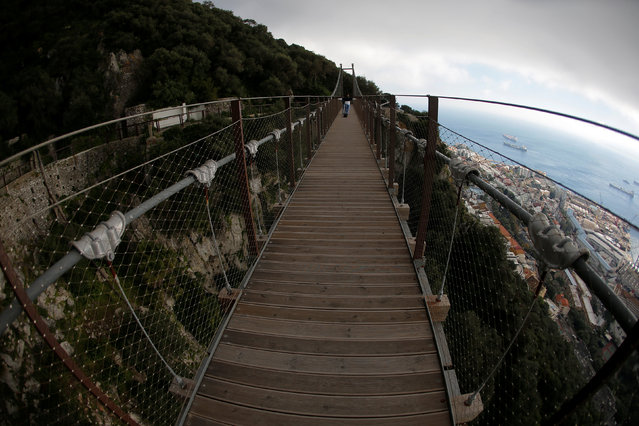 Tourists cross the Windsor Bridge on the top of the Rock in the British overseas territory of Gibraltar, historically claimed by Spain April 18, 2018. (Photo by Jon Nazca/Reuters) 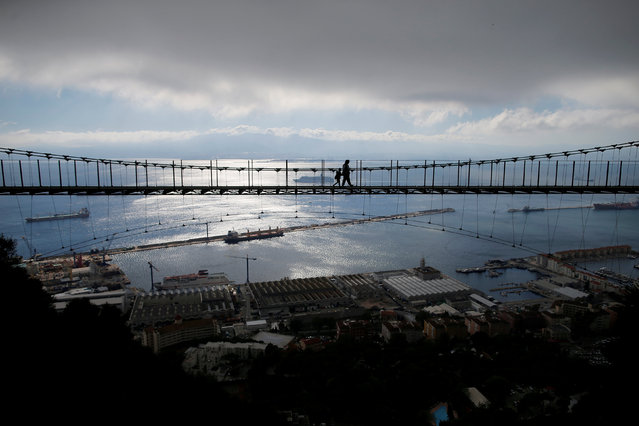 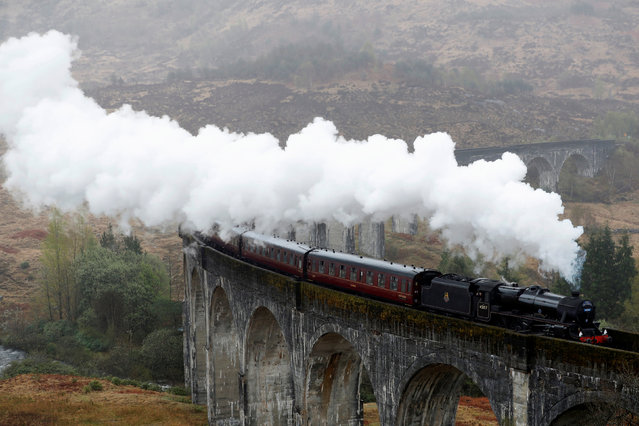 The Jacobite steam train crosses the Glenfinnan Viaduct in Scotland May 4, 2018. (Photo by Russell Cheyne/Reuters) 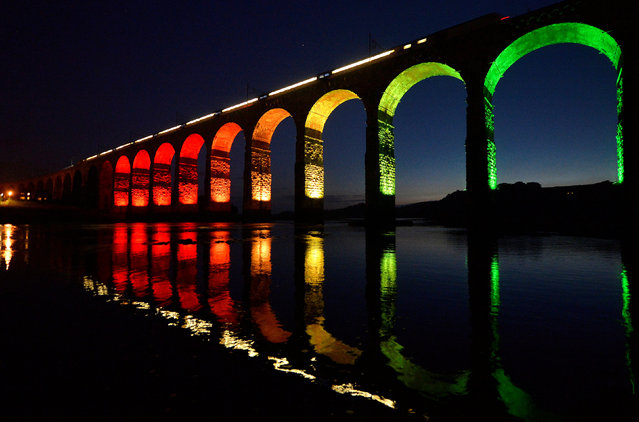 A train travelling on the East Coast mainline is reflected in the River Tweed as it crosses the Royal Border Bridge at dusk, in Berwick-Upon-Tweed in Northumberland, Britain August 22, 2013. (Photo by Toby Melville/Reuters) 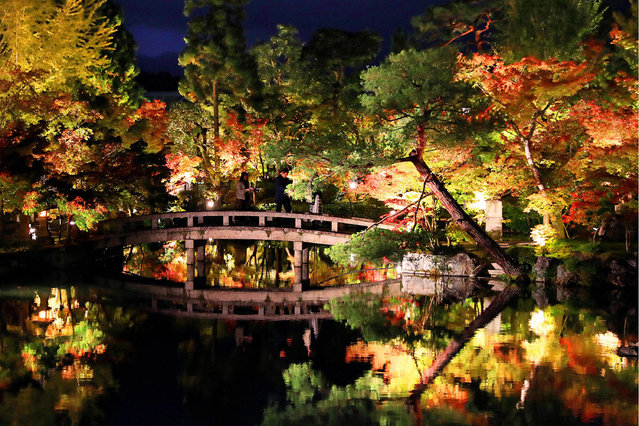 Coloured maples are illuminated at a test lighting at Eikando-Zenrinji Temple on November 1, 2018 in Kyoto, Japan. The night illumination will take place from November 3 to December 2. (Photo by The Asahi Shimbun via Getty Images) 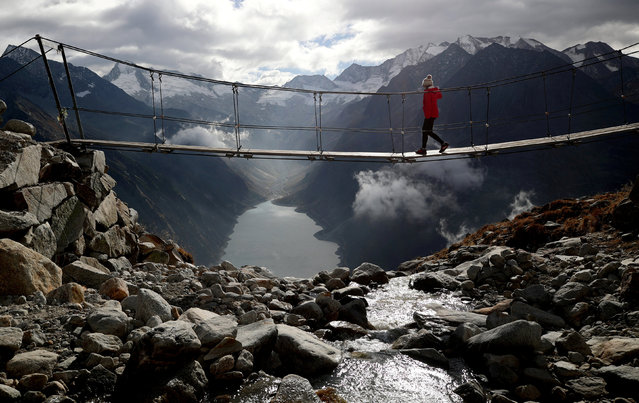 A woman walks on a swing bridge beyond Schlegeis reservoir on a sunny autumn day near the alpine village of Ginzling, Austria October 21, 2018. (Photo by Lisi Niesner/Reuters) 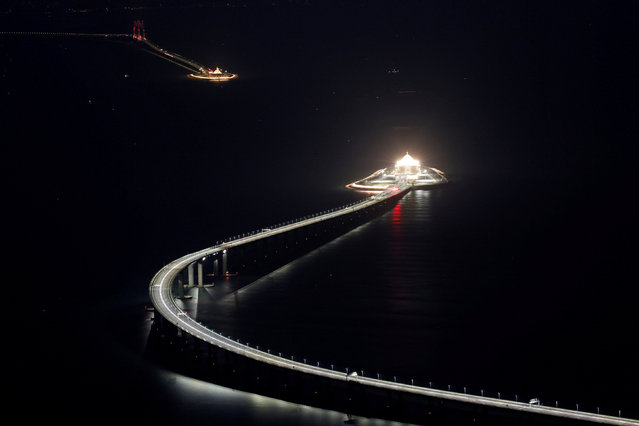 An evening view of the Hong Kong-Zhuhai-Macau bridge and its entrances to a cross sea tunnel, off Lantau island in Hong Kong, China October 21, 2018, before its opening ceremony on October 23, 2018. (Photo by Bobby Yip/Reuters) 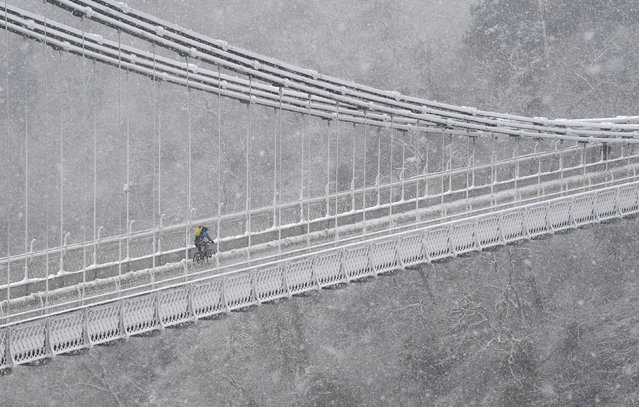 A person cycles over the Clifton Suspension Bridge and Avon Gorge in Bristol during snowfall in southwest Britain, February 1, 2019. (Photo by Toby Melville/Reuters) 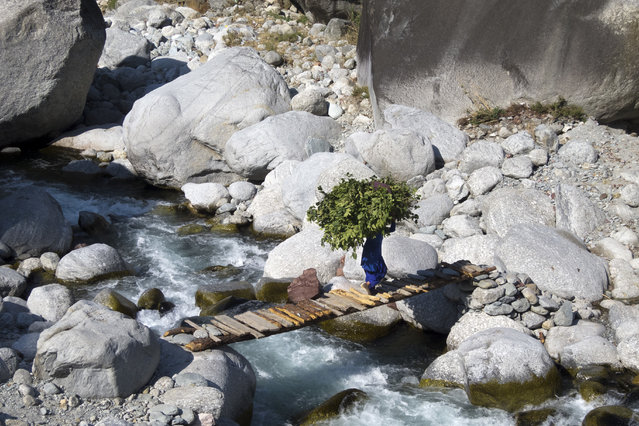 An Indian woman crosses a wood bridge across a stream as she carries a large bundle of leaves collected from the woods to be used as fodder, near Ghera village in Dharmsala, India, Tuesday, October 30, 2018. (Photo by Ashwini Bhatia/AP Photo)
Edit Del
23 Mar 2019 00:05:00, post received 0 comments
Publication archive:
←   →
Popular tags:
All tags
Last searches: