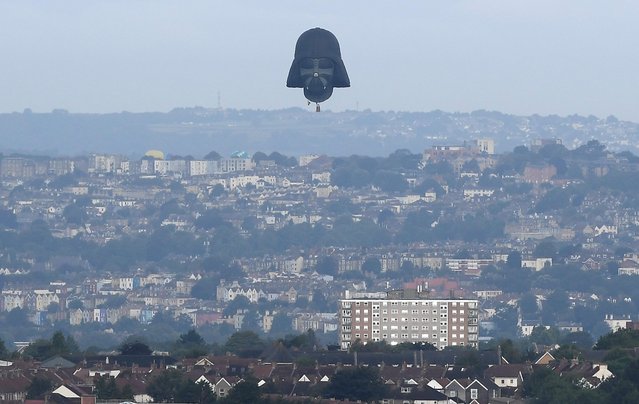 A balloon shaped as the head of fictional Star Wars film character Darth Vader is seen flying at the annual Bristol hot air balloon festival in Bristol, Britain, August 8, 2019. A huge Darth Vader mask balloon took to the skies over the western English port of Bristol on Thursday as the city's annual balloon festival began. (Photo by Toby Melville/Reuters) 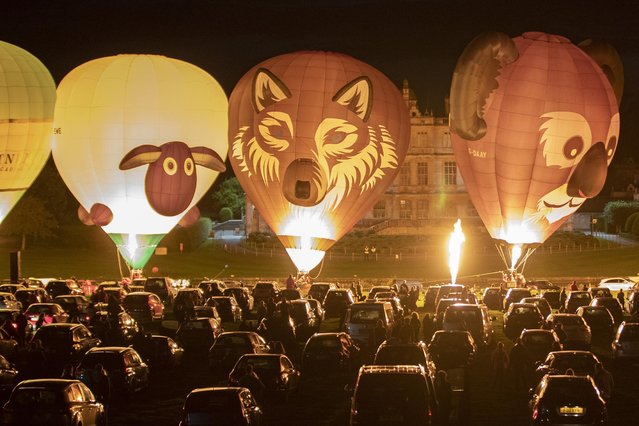 The Sky Safari hot-air balloon festival taking place at Longleat stately home in Wiltshire, UK on Friday, September 11, 2020. Spectators had to watch from their cars to meet social-distancing rules as the balloons took to the skies. (Photo by Corin Messer/BNPS) 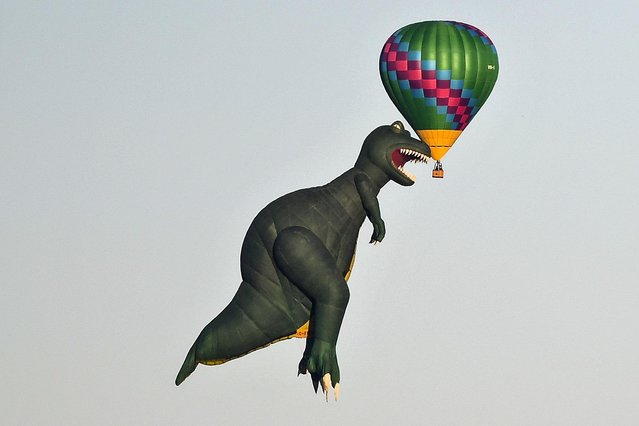 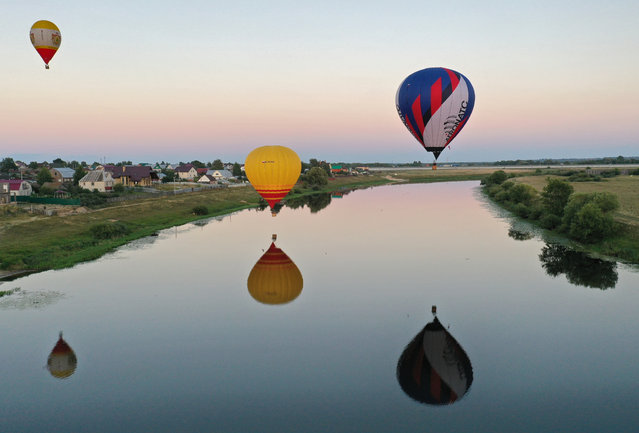 Hot-air balloons launched by participants in the 2020 Sky of Russia International Balloon Festival in Ryazan Region, Russia on August 17, 2020. (Photo by Alexander Ryumin/TASS) 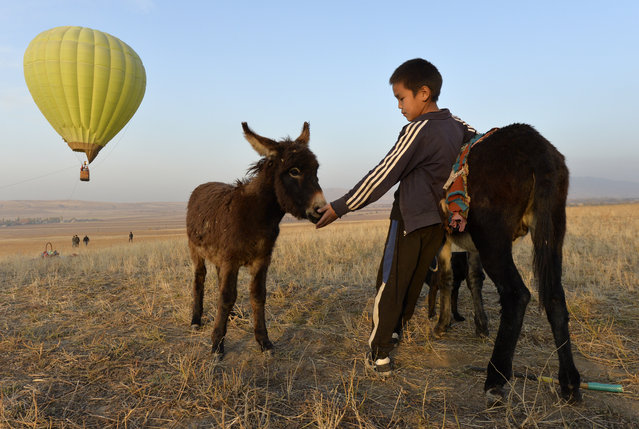 A Kyrgyz boy pets a donkey as other people launch a balloon at sunset outside Tash-Dyobyo village, 12 kilometers (7,5 miles) south of Bishkek, Kyrgyzstan, Saturday, October 17, 2020. The political turmoil that has gripped Kyrgyzstan hasn’t reached this quiet village in the mountains near the capital, where residents talk about the country’s feuding elites with resignation and disdain. (Photo by Vladimir Voronin/AP Photo) 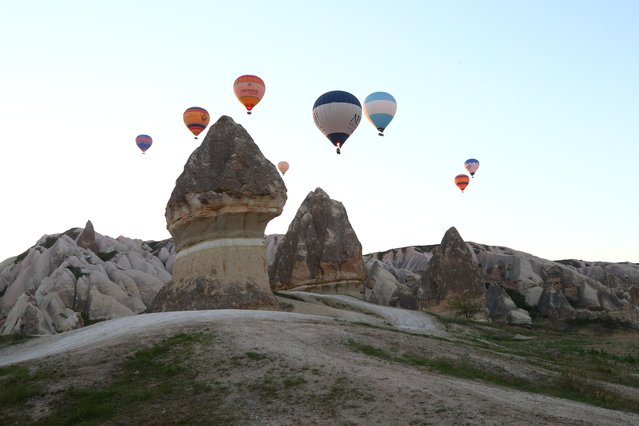 Hot-air balloons glide and take off between the valleys at the historical Cappadocia region, located in Central Anatolia's Nevsehir province, Turkey on April 23, 2021. (Photo by Behcet Alkan/Anadolu Agency via Getty Images) 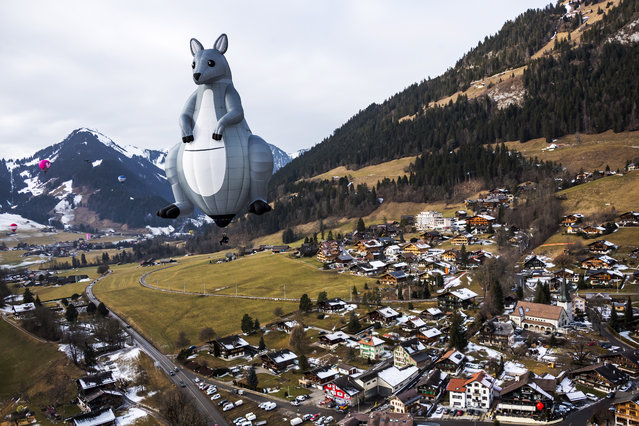 A hot air balloon takes off during the 42nd International Hot Air Balloon week, in the skiing resort of Chateau-d'Oex, in the Swiss Alps, Switzerland, 26 January 2020. 60 balloons from 15 countries will be taking part in the event between 25 January and 02 February in the Swiss mountain resort is famous for ideal flight conditions due to an exceptional microclimate. (Photo by Jean-Christophe Bott/EPA/EFE) 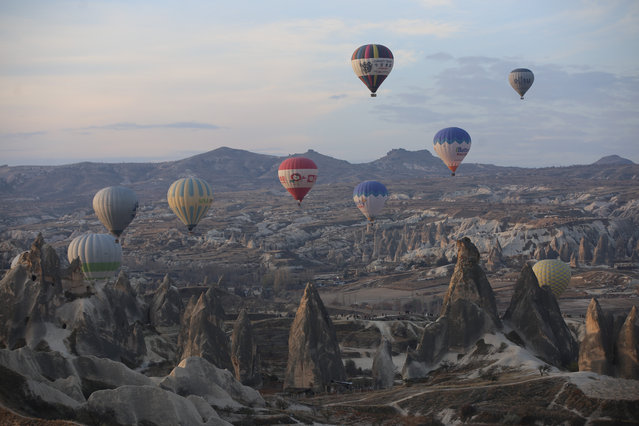 A drone photo shows a view of hot air balloons gliding over Goreme district during early morning at the historical Cappadocia region, located in Central Anatolia's Nevsehir province, Turkey on November 24, 2019. Cappadocia is preserved as a UNESCO World Heritage site and is famous for its chimney rocks, hot air balloon trips, underground cities and boutique hotels carved into rocks. In Turkey's one of the most important tourism regions Cappadocia, local and foreign tourists get the chance of enjoying the scenery participating air balloon tours in the early hours of the morning. (Photo by Behcet Alkan/Anadolu Agency via Getty Images) 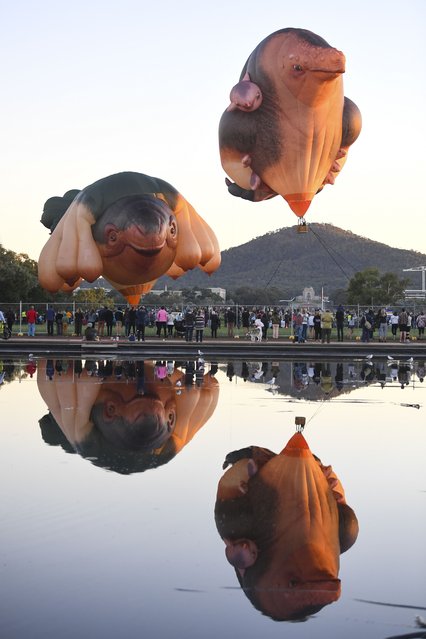 People watch as new hot air balloon sculpture Skywhalepapa (right) and its companion balloon Skywhale (commissioned 2013) are being tethered during the official launch event in Canberra, Australia, 07 February 2021. Skywhalepapa and Skywhale were designed by artist Patricia Piccinini and are considered a contemporary sculpture, and a certified aircraft. Weather conditions meant that the hot air balloons were not able to fly instead they were tethered near the National Gallery of Australia. (Photo by Lukas Coch/EPA/EFE) 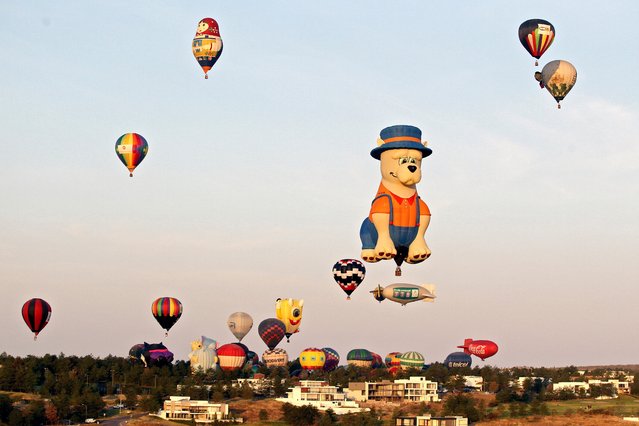 Some of the 100 hot air balloons that participate in the International Hot Air Balloon Festival, fly over Leon, Guanajuato state, Mexico, on November 14, 2020, amid the COVID-19 coronavirus pandemic. The festival was held without spectators to avoid crowds and prevent contagion. (Photo by Ulises Ruiz/AFP Photo) 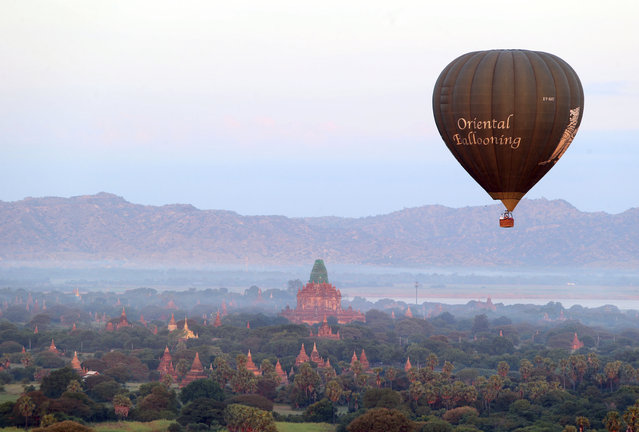 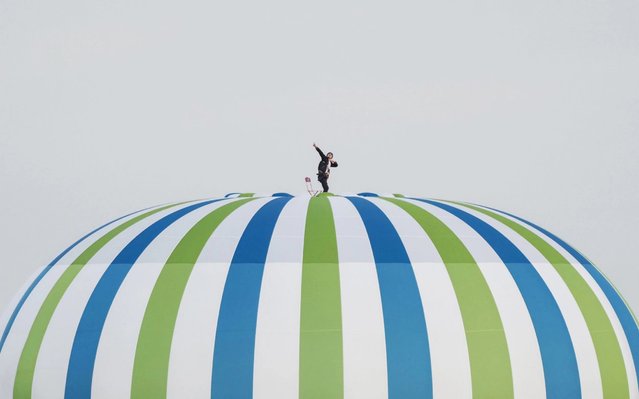 French balloonist Remi Ouvrard attempts to set a world record by standing on the top of a hot air balloon at an altitude of over 1,000 meters on February 21, 2020 in Chatellerault, western France. (Photo by Guillaume Souvant/AFP Photo) 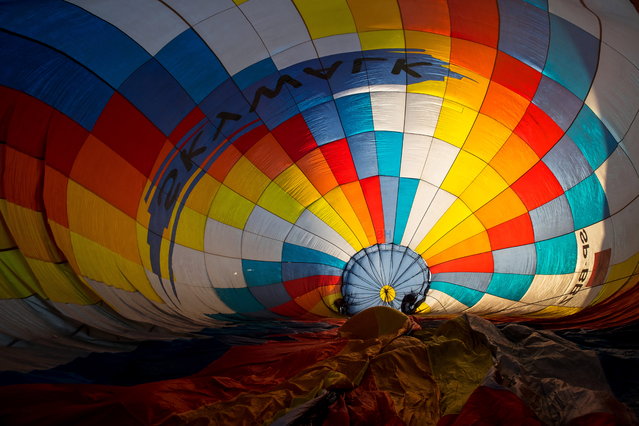 A hot-air balloon is prepared for the start of the Balloon Race as part of celebrations the 100th birth anniversary of the late Pope John Paul II at the Krakow John Paul II International Airport in Krakow, Poland, 18 May 2020. Pope John Paul II born on 18 May 1920 in Wadowice, 50 kilometres southwest of Krakow, and was the head of the Catholic Church and sovereign of the Vatican City State from 1978 to 2005. (Photo by Lukasz Gagulski/EPA/EFE/Rex Features/Shutterstock) 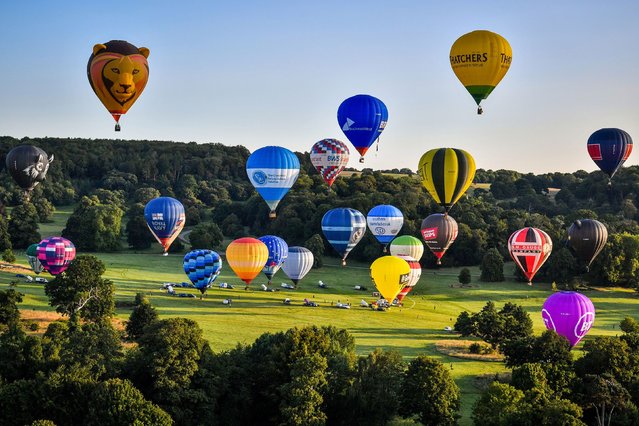 Hot air balloons take off in a mass ascent from Bristol on August 3, 2020, with 43 balloon teams taking part, for a Fiesta Flypast over the city as part of the socially distanced alternative to the Bristol International Balloon Fiesta 2020. (Photo by Ben Birchall/PA Images via Getty Images) 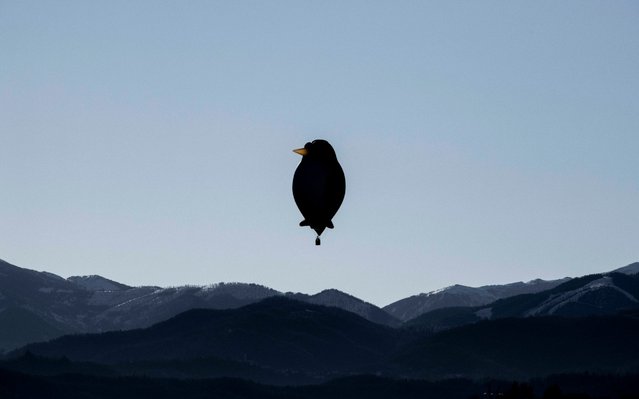 A hot air balloon shaped like a bird takes off from Mondovi, Italy during the 32nd Epiphany International Air Balloon Rally on Sunday, January 5, 2020. (Photo by Marco Alpozzi/LaPresse via AP Photo) 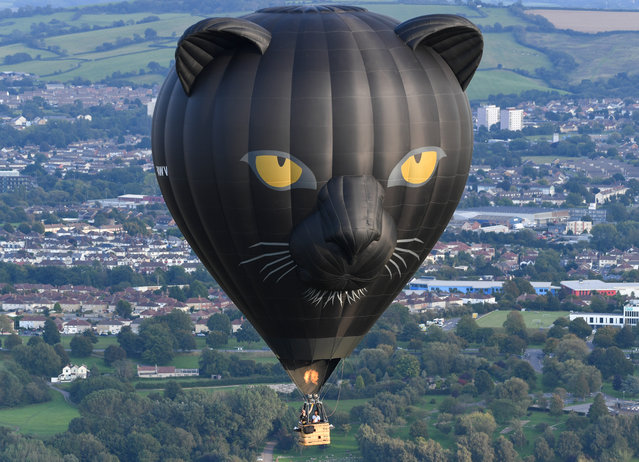 Musician Jerome Gamble plays guitar to accompany the recorded music as it is played to the city below on September 01, 2020 in Bristol, England. Created by Bristol-based artist Luke Jerram and composer Dan Jones, “Sky Orchestra – A Moment in Time” was first performed at the Bristol International Balloon Fiesta in 2003. (Photo by Finnbarr Webster/Getty Images)
Edit Del
06 May 2021 08:35:00, post received 0 comments
Publication archive:
←   →
Popular tags:
All tags
Last searches: