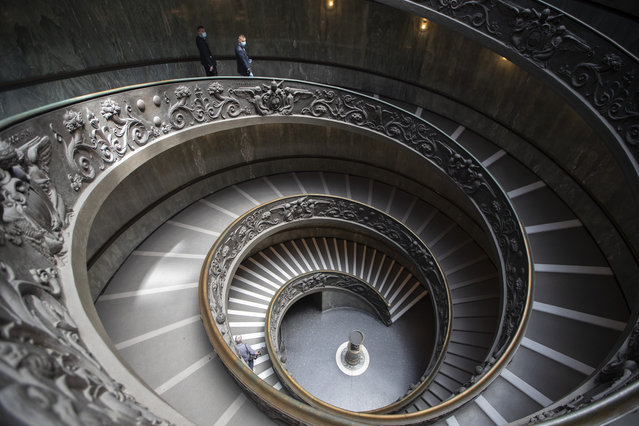 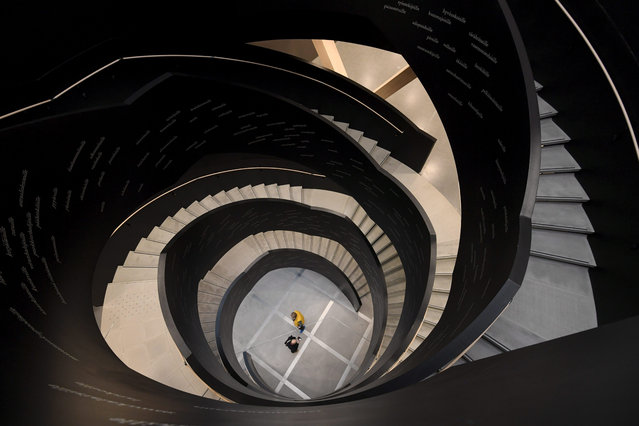 A staircase of Helsinki's new Central Library Oodi is seen during a preview on November 30, 2018 in Helsinki, Finland. The new library will open its doors to the public on December 5, 2018, a day before Finland's 101st birthday. (Photo by Markku Ulander/Lehtikuva via AFP Photo) 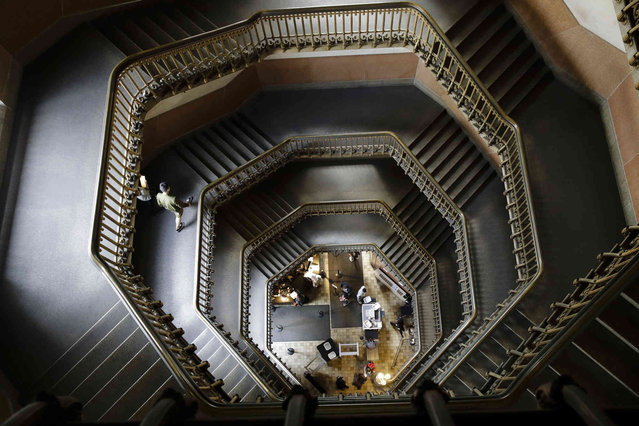 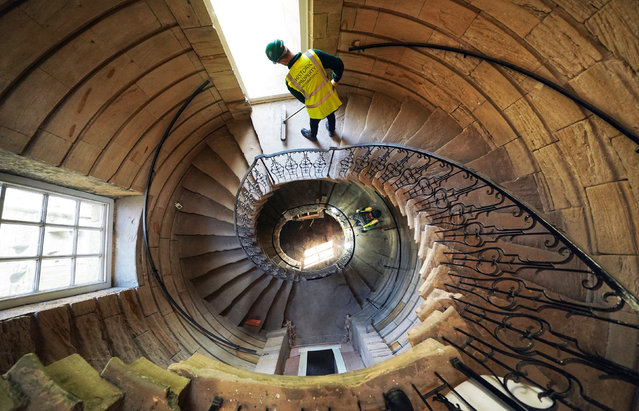 Workers on the east spiral staircase which sits one end of the Central Hall at the National Trust's Seaton Delaval Hall in Northumberland, England on September 22, 2020, which has undergone restoration after still bearing scars from a fire dating back to 1822. (Photo by Owen Humphreys/PA Images via Getty Images) 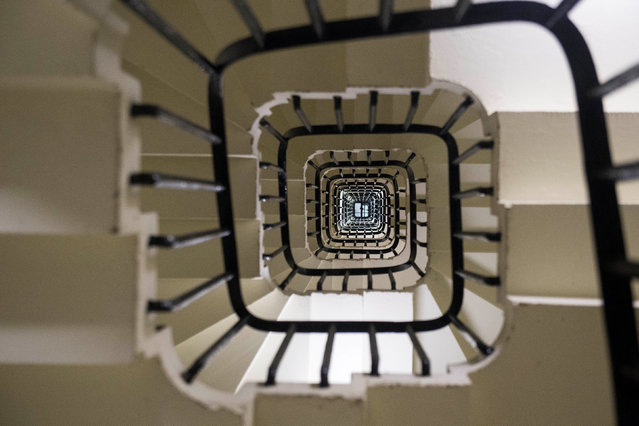 The spiral staircase within the Elizabeth Tower at the Palace of Westminster in London, UK. (Photo by Reuters) 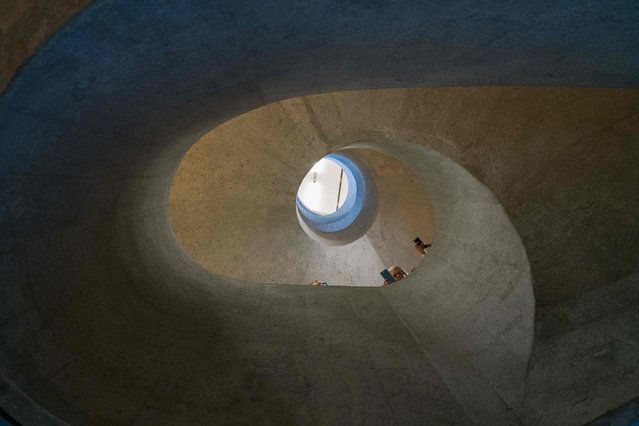 Visitors look down from a set of stairs as they visit Victoria Prison, a former colonial prison and police station colloquially known as Tai Kwun, or “big station”, on its opening day to the public in Hong Kong on May 29, 2018. The multi- million renovation project saw the overhaul of the complex built by the British between the mid-19 th and 20 th centuries which housed the city' s first jail – Victoria Prison – as well as its central police station and court buildings. (Photo by Anthony Wallace/AFP Photo) 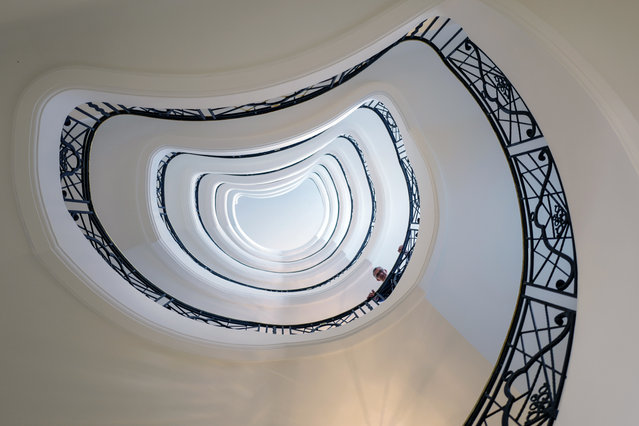 This picture taken on March 20, 2019 shows Louis, a concierge of the Hotel Martinez posing in the spiral staircase of the palace, on the French riviera city of Cannes, southern France. (Photo by Valery Hache/AFP Photo) 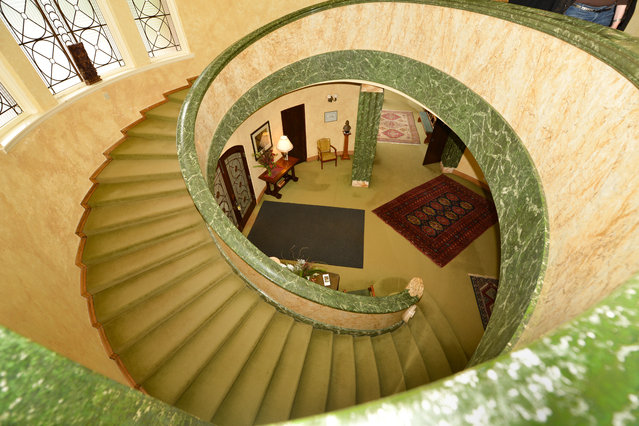 Mahratta (1941) entry foyer and staircase. Mahratta is one of the finest of the limited number of art deco mansions on Sydney’s north shore. It was designed with a mixture of art deco and Georgian revival. The interior of the house has majesty and theatrical charm, particularly in the grand entry and main hall with its curved staircase and walls and green pilasters. Here the art deco is balanced with a classical touch using scagliola technique to imitate marble and alabaster. (Photo by Peter Sheridan /The Guardian) 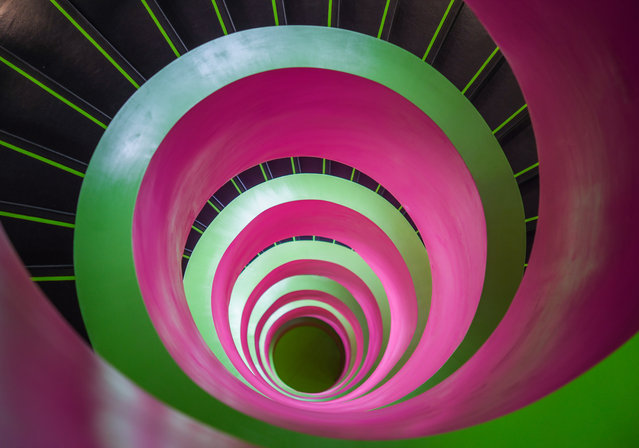 A spiral staircase in the library at the Brandenburg University of Technology Cottbus-Senftenberg (BTU) in Cottbus, Germany on May 17, 2018. (Photo by Patrick Pleul/Picture Alliance/Avalon.red) 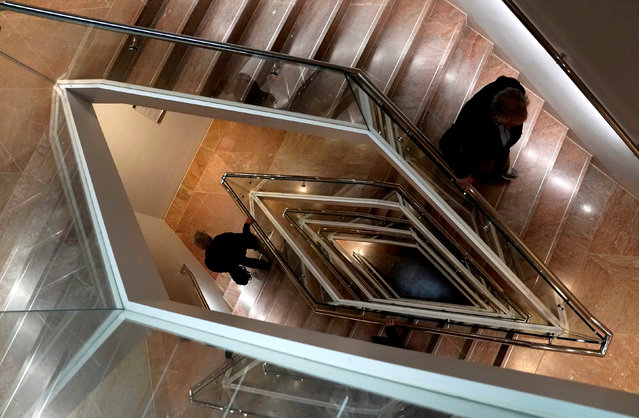 Visitors use the Tower Stair at the National Gallery of Art in Washington, U.S., February 25, 2019. (Photo by Kevin Lamarque/Reuters) 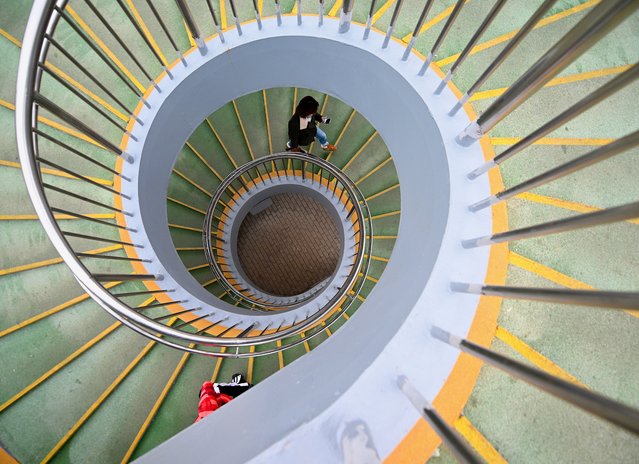 A pedestrian walks up a staircase of an overpass in Beijing on November 22, 2019. (Photo by Noel Celis/AFP Photo) 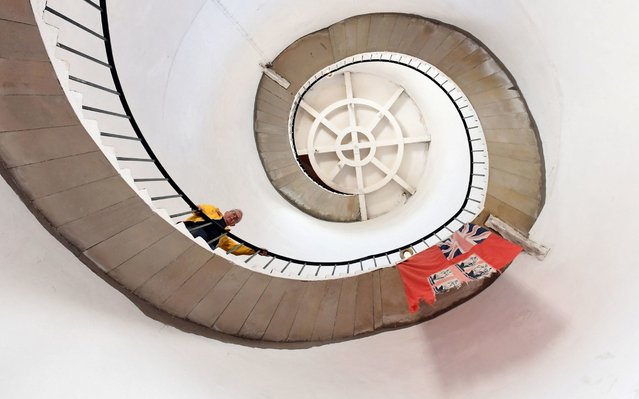 Stephen Burke, a volunteer at the Happisburgh Lighthouse, on its 96-step staircase in Norfolk, England. It welcomed visitors for the first open day of the year yesterday, April 21, 2019. (Photo by Joe Giddens/PA Wire Press Association) 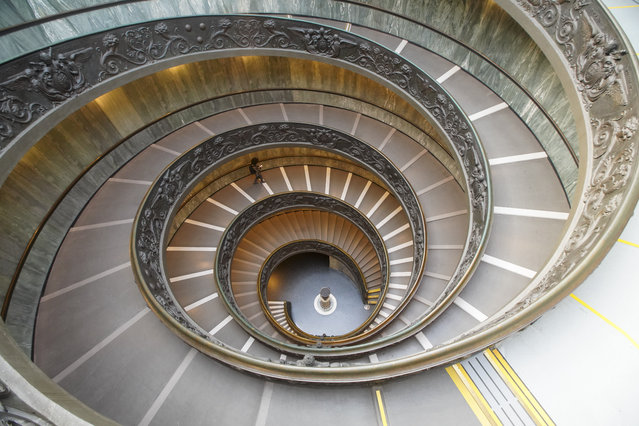 A visitor walks down a staircase, designed by architect Giuseppe Momo in 1932, as she leaves the Vatican Museums, at the Vatican, Monday, February 1, 2021. The Vatican Museums reopened Monday to visitors after 88 days of shutdown following COVID-19 containment measures. (Photo by Andrew Medichini/AP Photo) 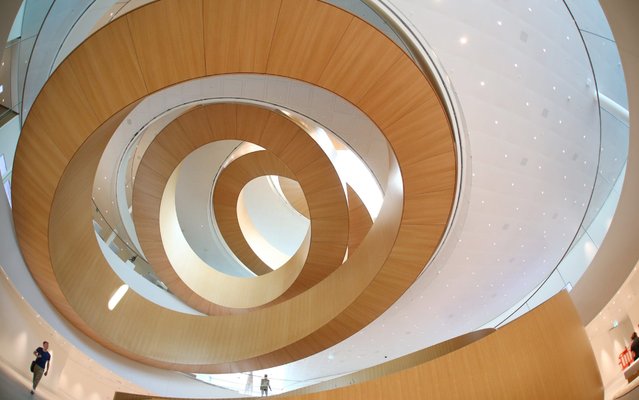 Olympic House, the new headquarters of the International Olympic Committee (IOC), designed by 3XN+ IttenBrechbuehl, is pictured before its official opening in Lausanne, Switzerland, June 19, 2019. (Photo by Denis Balibouse/Reuters) 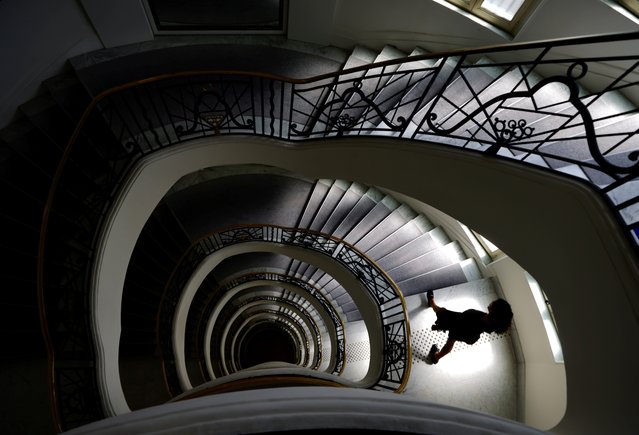 A woman walks in the stairs of the Hotel Martinez in Cannes as the French Riviera prepares for the 2021 edition of the Cannes Film Festival which will take place next July, in France, June 3, 2021. (Photo by Eric Gaillard/Reuters)
Edit Del
09 Jun 2021 10:34:00, post received 0 comments
Publication archive:
←   →
Popular tags:
All tags
Last searches: