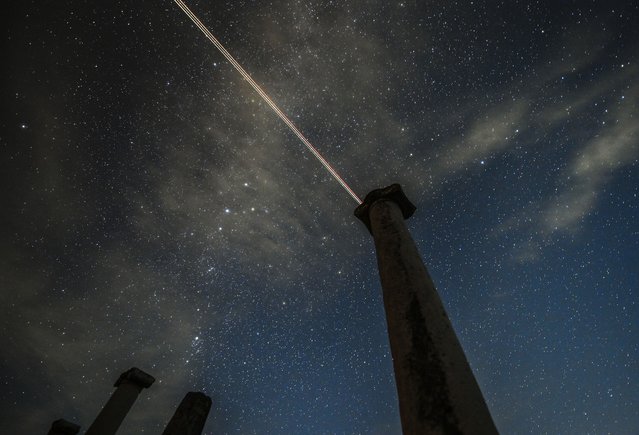 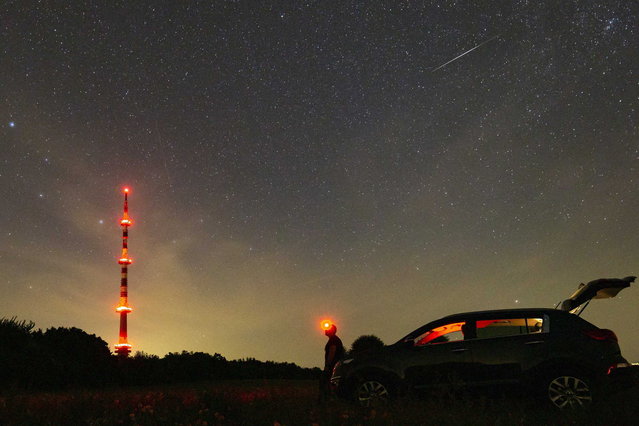 A meteorite of the swarm of meteorites Perseida flies above the Ujudvar TV Tower as seen from Ujudvar, Hungary, late Friday, August 13, 2021. Perseidas, one of the brightest meteorite swarms, consist of a multitude of stellar particles which due to their high speed glow up and burn by entering Earth's atmosphere. (Photo by Gyorgy Varga/MTI via AP Photo) 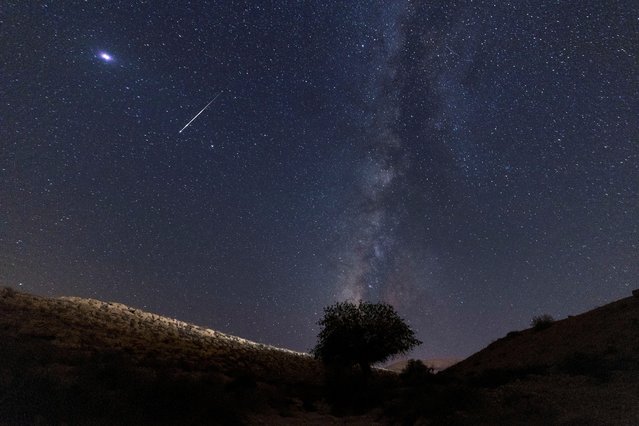 A meteor streaks past stars in the night sky during the annual Perseid meteor shower at the Negev Desert in southern Israel, August 13, 2021. (Photo by Amir Cohen/Reuters) 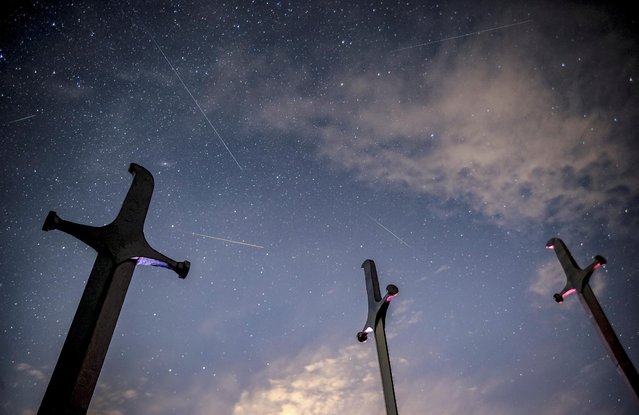 Meteors streak past stars in the night sky above the Battle of Didgori memorial complex during the annual Perseid meteor shower at Didgori, Georgia, August 13, 2021. (Photo by Irakli Gedenidze/Reuters) 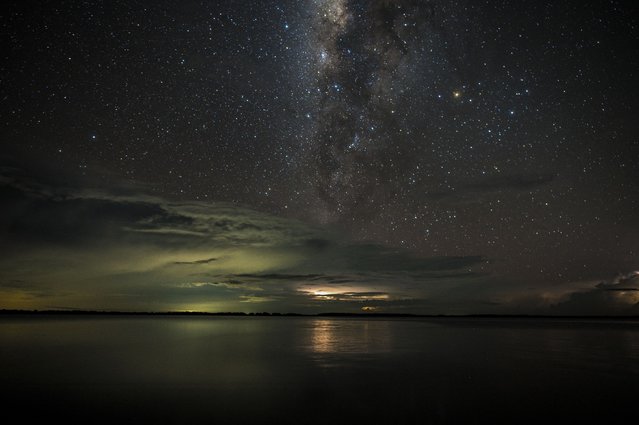 View of the milky way in the night sky as a lightning strikes over lake Maracaibo in the village of Ologa, in Zulia state, Venezuela, on September 6, 2021. (Photo by Federico Parra/AFP Photo) 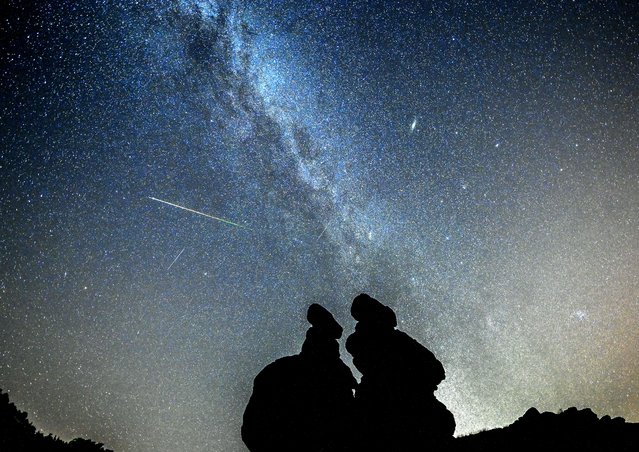 A long exposure photo shows meteor streaks crossing the night sky over the stone dools in Kuklice, near the eastern city of Kratovo, Republic of North Macedonia, early 13 August 2021. The Perseid meteor shower occurs every year in August when the Earth passes through debris and dust of the Swift-Tuttle comet. (Photo by Georgi Licovski/EPA/EFE) 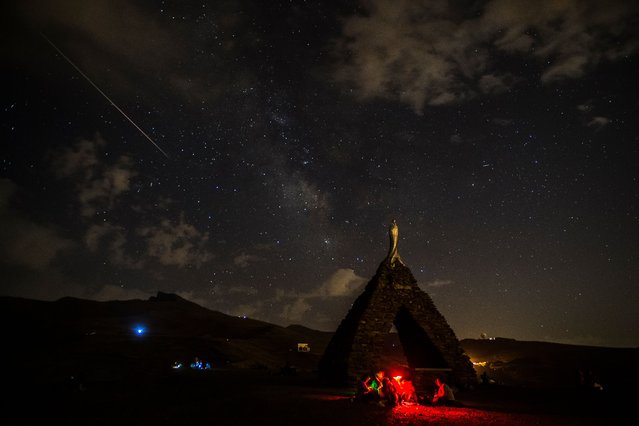 A shooting star seen from the sanctuary of the Virgen de las Nieves more than 2,600 meters above sea level on August 12, 2021 in Sierra Nevada, Spain. The annual meteor shower Perseids can be seen between the days of July 17 to August 24 of each year. The most optimal day is August 11. (Photo by Carlos Gil Andreu/Getty Images) 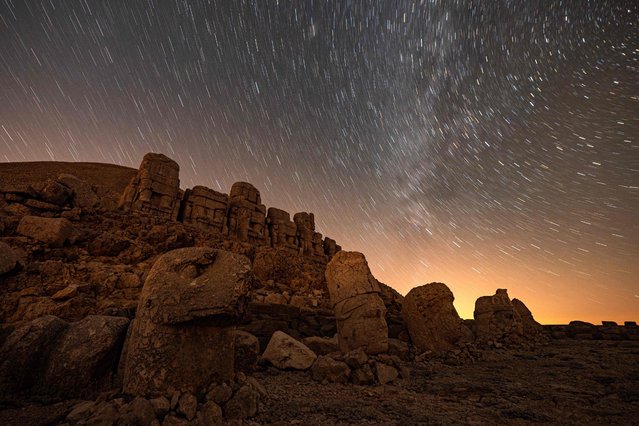 This photograph shows massive stone head statues at the archaeological site of Mount Nemrut in Adiyaman, southeastern Turkey, on September 17, 2021. This UNESCO World Heritage Site since 1987 is on a 2,134-metre-high mountain including giant 10-meter high, seated statues of King Antiochus I himself surrounded by ancient Gods, including Zeus and Apollo, which was discovered in 1881 by a German engineer. (Photo by Yasin Akgul/AFP Photo) 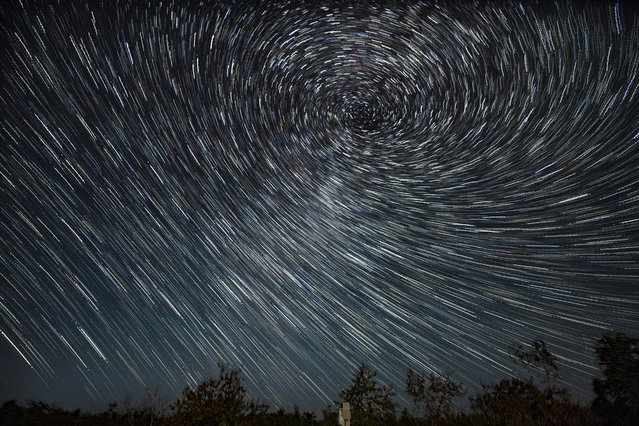 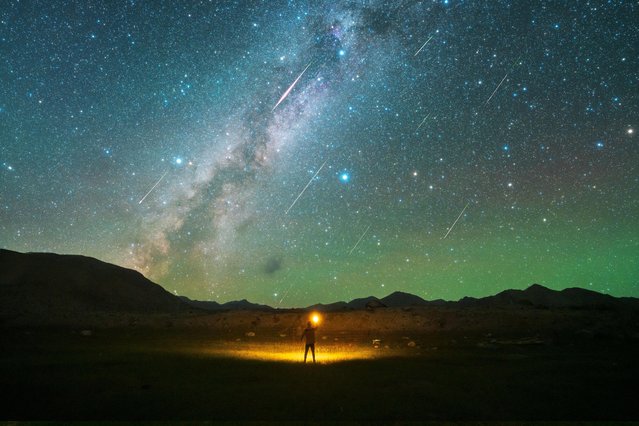 A man watches the Perseid meteor shower on the Pamir Plateau on August 13, 2021 in Xinjiang Uygur Autonomous Region of China. (Photo by VCG/VCG via Getty Images) 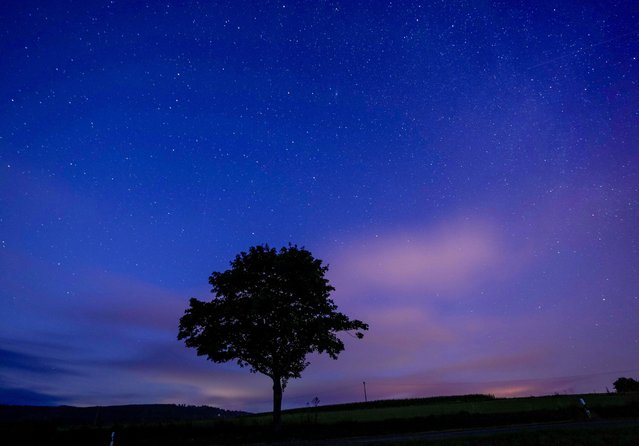 Stars shine above a tree in the Taunus region near Neu Anspach, Germany, Sunday, September 19, 2021. (Photo by Michael Probst/AP Photo) 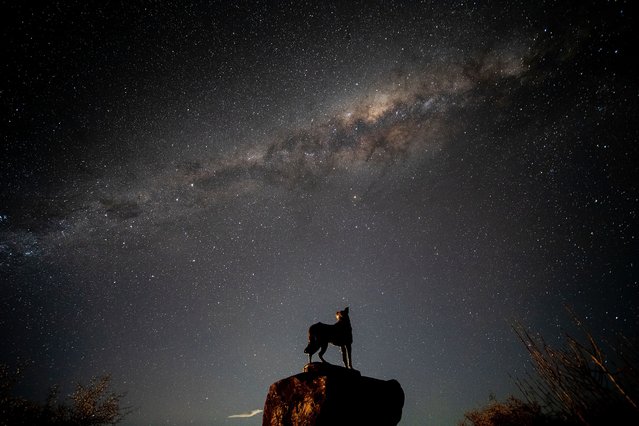 The Milky Way appears in the sky above the statue of a sheep dog in Lake Tekapo in the Mackenzie Country, South Island, New Zealand, on August 15, 2021. Lake Tekapo is one of the famous tourist attractions in South Island in New Zealand. (Photo by Sanka Vidanagama/NurPhoto/Rex Features/Shutterstock) 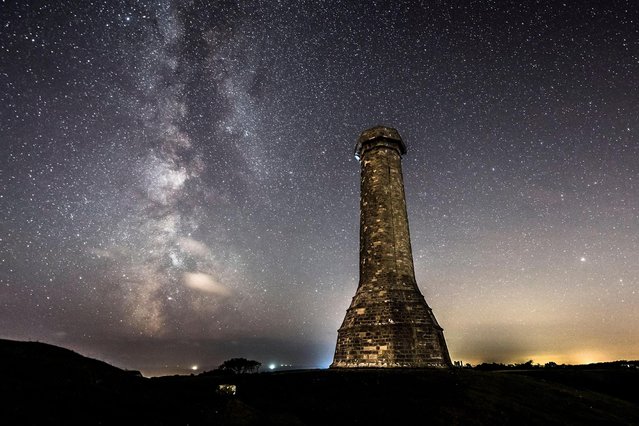 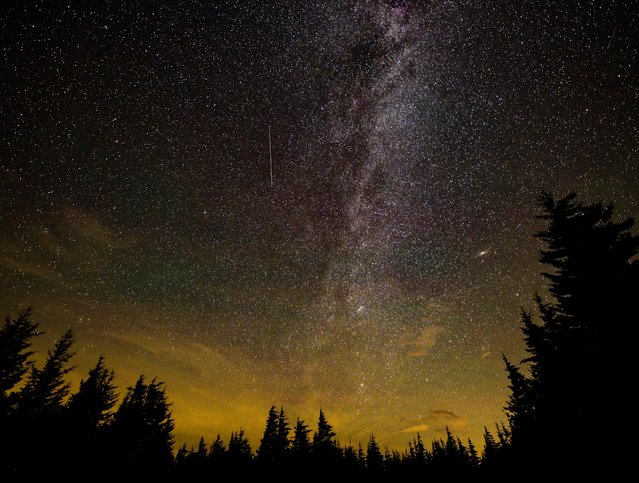 In this 30 second cameras exposure, a meteor streaks across the sky during the annual Perseid meteor shower, Wednesday, August 11, 2021, in Spruce Knob, West Virginia. (Photo by Bill Ingalls/NASA via AP Photo) 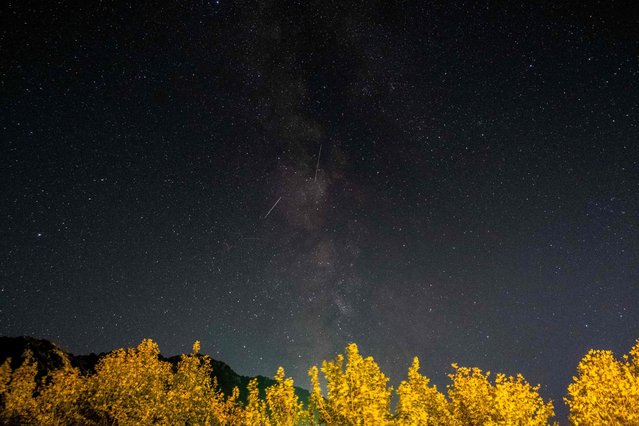 Meteors of the Orionid meteor shower streak as they cross through the milkyway in the mountainous area of Tannourine in northern Lebanon, on October 3, 2021. (Photo by Ibrahim Chalhoub/AFP Photo)
Edit Del
21 Oct 2021 08:48:00, post received 0 comments
Publication archive:
←   →
Popular tags:
All tags
Last searches: