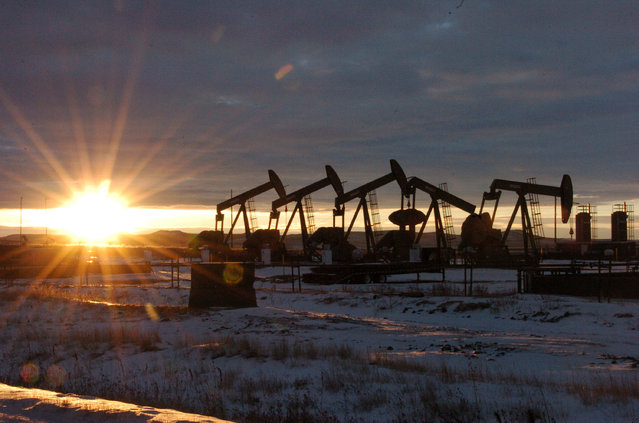 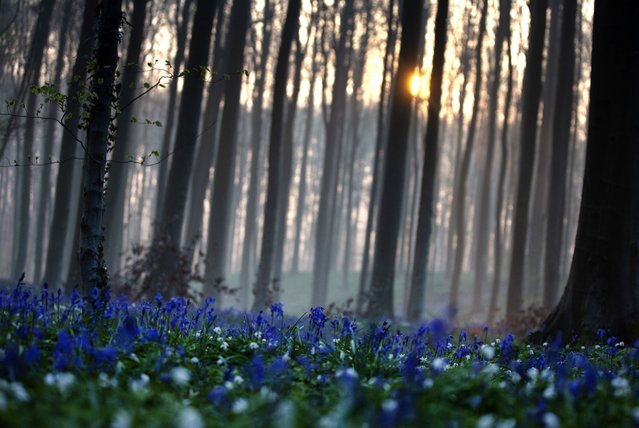 The sun rises between the trees as bluebells, also known as wild Hyacinth, bloom on the forest floor of the Hallerbos in Halle, Belgium, Tuesday, April 20, 2021. There is no stopping flowers when they bloom or blossoms when they burst in nature, but there are efforts by some local authorities to limit the viewing. Due to COVID-19 restrictions visits to the forest to see the flowers has been discouraged for a second year in a row. (Photo by Virginia Mayo/AP Photo) A couple walk along the beach at North Berwick, East Lothian, United Kingdom at sunrise on Thursday, April 15, 2021. (Photo by Jane Barlow/PA Images via Getty Images) People watch the sunset over the Finnish Gulf coast in St. Petersburg, Russia, on April 14, 2021. (Photo by Dmitri Lovetsky via AP Photo) 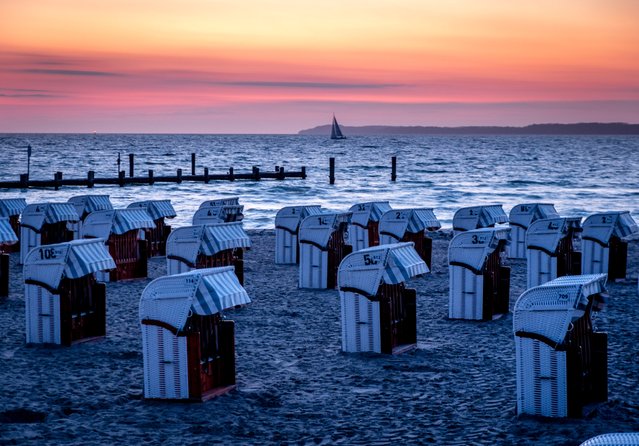 Beach chairs are lined up at the Baltic Sea in Travemuende, northern Germany, before sunrise on Sunday, April 18, 2021. (Photo by Michael Probst/AP Photo) 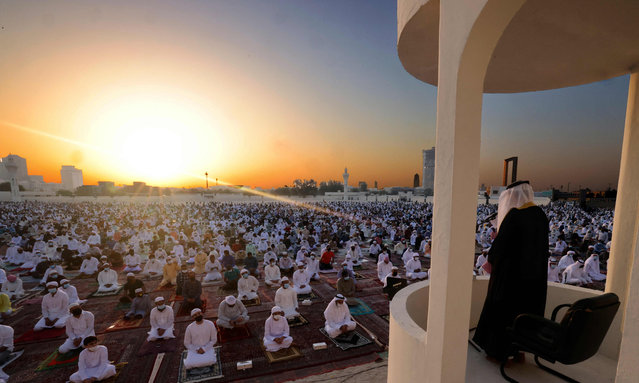 Muslim worshippers listen to the Eid al-Fitr morning prayer sermon at Dubai's Eid Musalla in the Gulf emirate's old port area on May 13, 2021, as Muslims across the golbe mark the end of the holy fasting month of Ramadan. (Photo by Karim Sahib/AFP Photo) Lava flows from an eruption of the Fagradalsfjall volcano on the Reykjanes Peninsula in southwestern Iceland on Tuesday, May 11, 2021. (Photo by Miguel Morenatti/AP Photo) An office chair stands between small roads, fields and acres in the outskirts of Frankfurt, Germany, Wednesday, April 28, 2021. (Photo by Michael Probst/AP Photo) 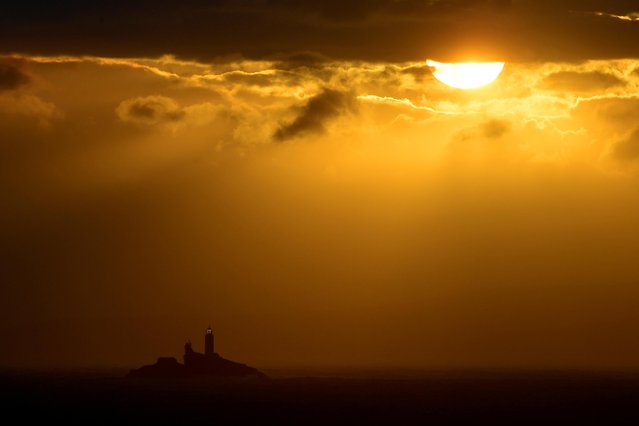 The Godrevy Lighthouse is seen just after sunrise, in St Ives Bay, Cornwall, southwest Britain on May 25, 2021. (Photo by Toby Melville/Reuters) Almost empty highways lead to Frankfurt, Germany, as the sun rises on Saturday, April 24, 2021. From the weekend on a curfew becomes effective to avoid the outspread of the coronavirus. (Photo by Michael Probst/AP Photo) 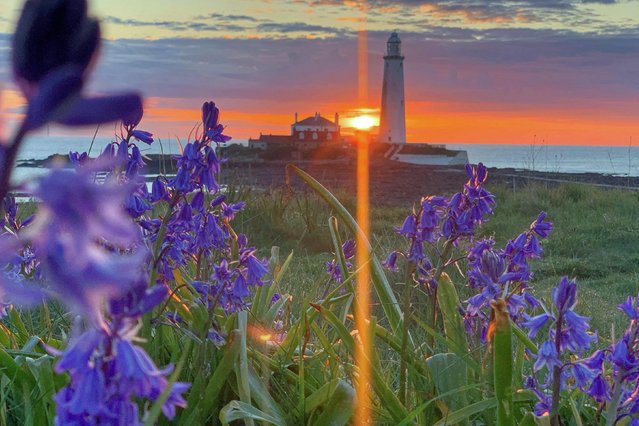 Sunrise over St Mary's lighthouse north of Whitley Bay on the coast of north east England on Wednesday, May 19, 2021. (Photo by Owen Humphreys/PA Images via Getty Images) 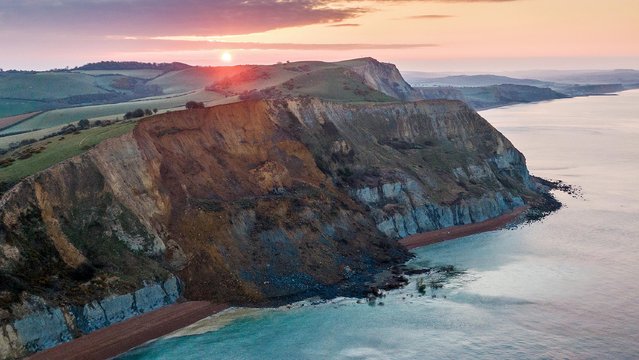 An aerial view of a cliff fall on April 14, 2021 in Seatown, United Kingdom. The 4,000-ton rockfall at Seatown has blocked off the beach between Seatown and Eype Beach, part of Britain's historic Jurassic Coast. The cliff fall is thought to be the biggest in 60 years. Dorset Council has warned that further falls are expected urging residents to stay clear of the area. (Photo by Finnbarr Webster/Getty Images) 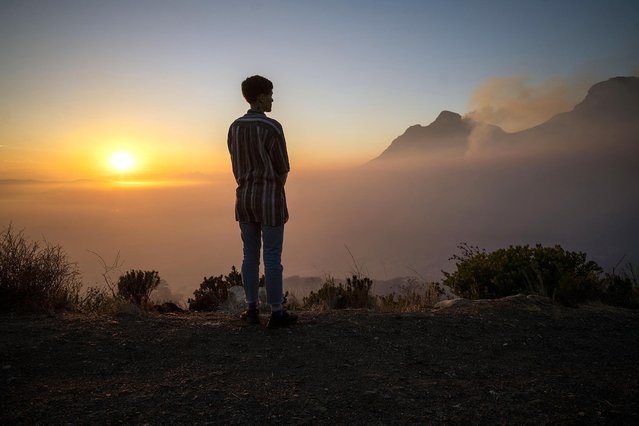 A Capetonian watches the sun rise from the top of Signal Hill as smoke engulfs the city of Cape Town, South Africa, Tuesday April 20, 2021. A massive fire spreading on the slopes of the city's famed Table Mountain, at right, is kept under control as firemen and helicopters take advantage of the low winds to contain the blaze. (Photo by Jerome Delay/AP Photo) 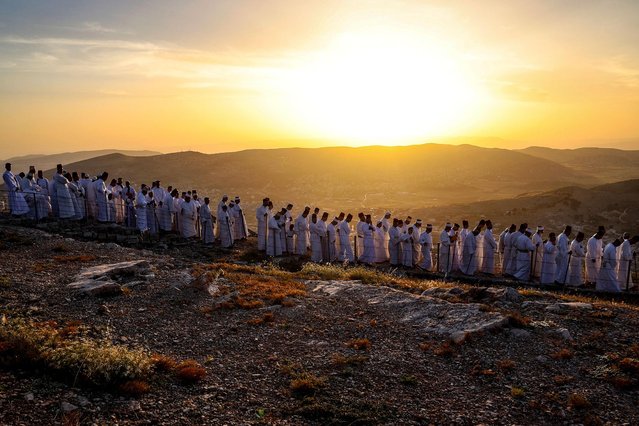 Samaritan worshippers arrive to take part in a Passover ceremony on top of Mount Gerizim, near the northern West Bank city of Nablus, on May 2, 2021. The Samaritans are a community of a few hundred people living in Israel and in the Nablus area who trace their lineage to the ancient Israelites led by the biblical prophet Moses out of Egypt. (Photo by Jaafar Ashtiyeh/AFP Photo) 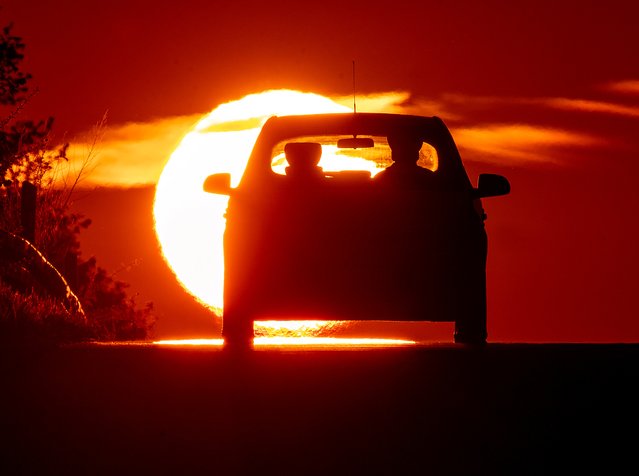