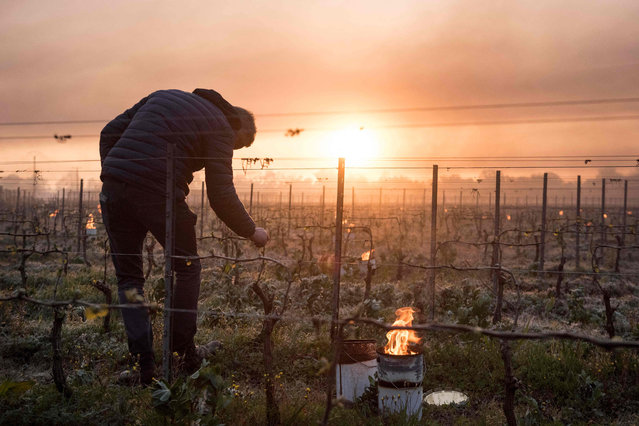 A man checks vine buds during the burning of anti-frost candles in the Luneau-Papin wine vineyard in Le Landreau, near Nantes, western France, on April 12, 2021, as temperatures fall below zero degrees celsius. (Photo by Sebastien Salom-Gomis/AFP Photo) 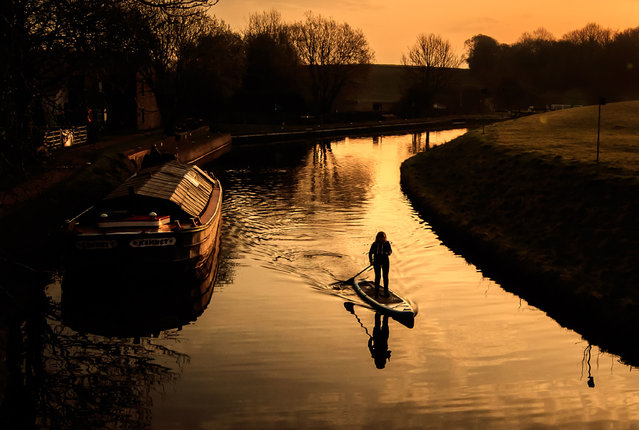 Joanna Moseley, the first woman to paddleboard along the 162-mile Canal and River Trust Coast-to-Coast Trail, pledges her support for Canal and River Trust's Plastics Challenge, as she paddleboards at the Greenberfield Locks near Barnoldswick, Lancashire on Wednesday March 31, 2021. (Photo by Danny Lawson/PA Images via Getty Images) 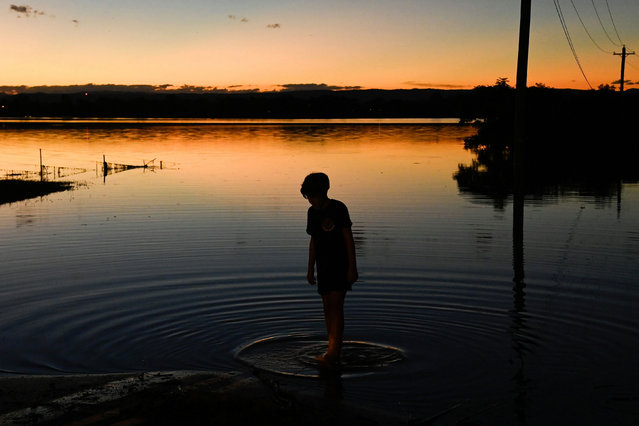 A boy stands on the edge of the floodwaters in the suburb of McGraths Hill as the state of New South Wales experiences widespread flooding and severe weather, near Sydney, Australia, March 24, 2021. (Photo by Jaimi Joy /Reuters) 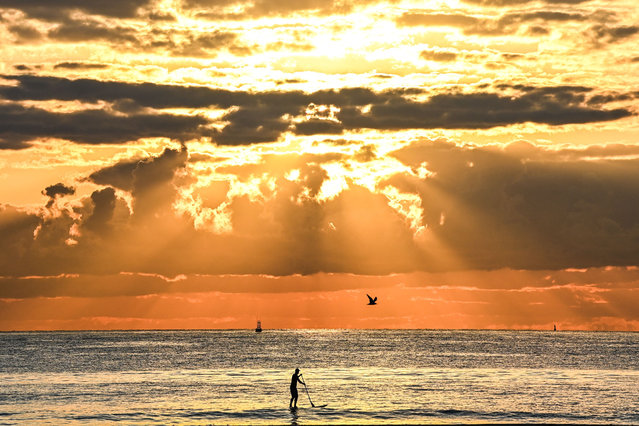 A man paddleboards during a sunrise on the beach in Miami Beach, Florida, on March 23, 2021. (Photo by Chandan Khanna/AFP Photo) 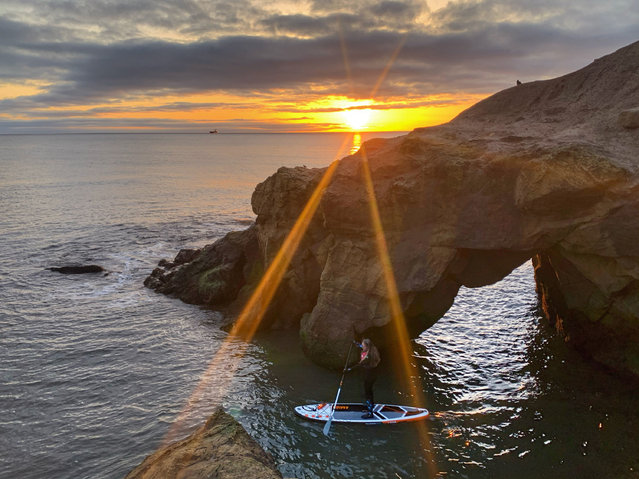 Anna Heslop, 25, paddleboarding during sunrise at Cullercoats Bay on the North East coast on Tuesday March 30, 2021. Temperatures in parts of the UK are expected to be significantly warmer this week as families and friends are reunited and sporting activities are allowed to resume in England. (Photo by Owen Humphreys/PA Images via Getty Images) 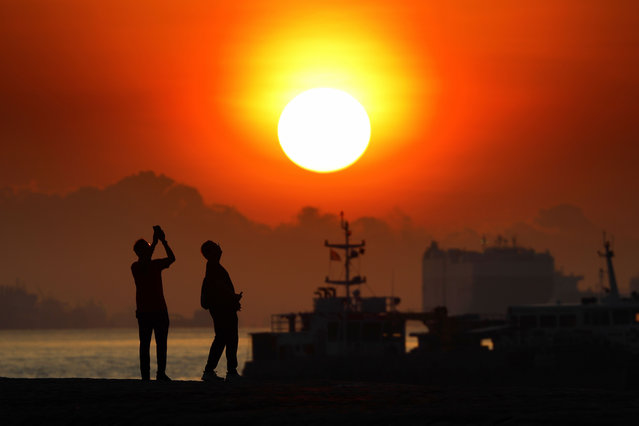 People taking photo of the sunrise are pictured with vessels anchored along the southern coast on April 2, 2021 in Singapore. (Photo by Suhaimi Abdullah/NurPhoto/Rex Features/Shutterstock) 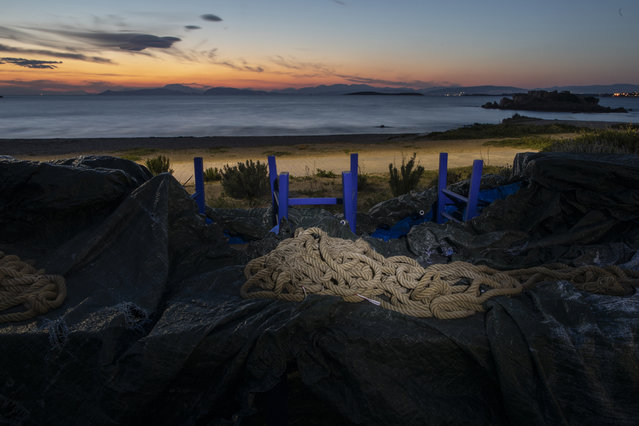 A rope used for decoration is placed on a canvas that covers tables and chairs of a shuttered fish restaurant at the seaside suburb of Kavouri, district of Athens, on Thursday, March 25, 2021. Restaurants, bars and cafes, whose nature it is to gather groups of people closely together, have remained shut since November when the Greek government imposed a second lockdown to curb the spread of COVID-19 infections. (Photo by Petros Giannakouris/AP Photo) 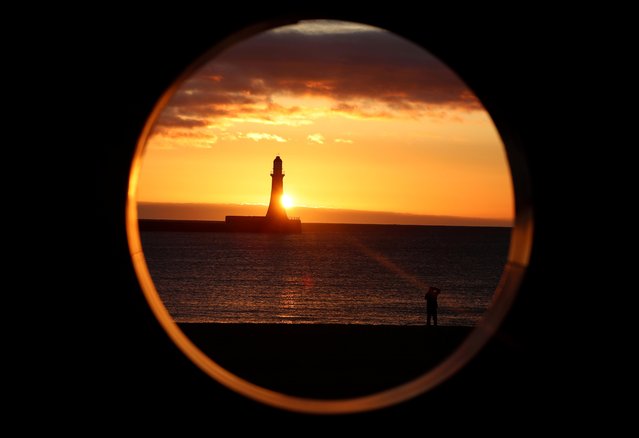 View of sunrise behind a lighthouse at Roker Beach in Sunderland, Britain on March 15, 2021. (Photo by Lee Smith/Reuters) 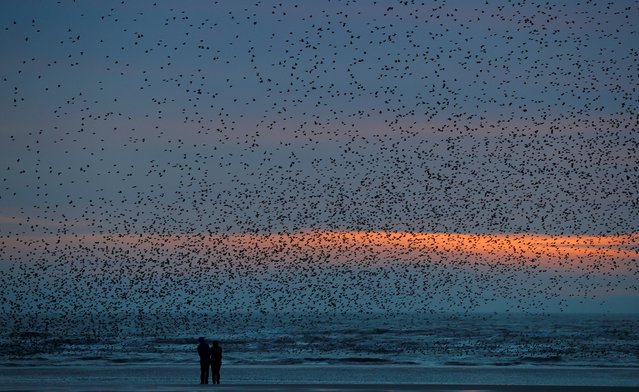 People watch a starling murmuration at dusk on the beach at Blackpool, Britain, March 16, 2021. (Photo by Phil Noble/Reuters) 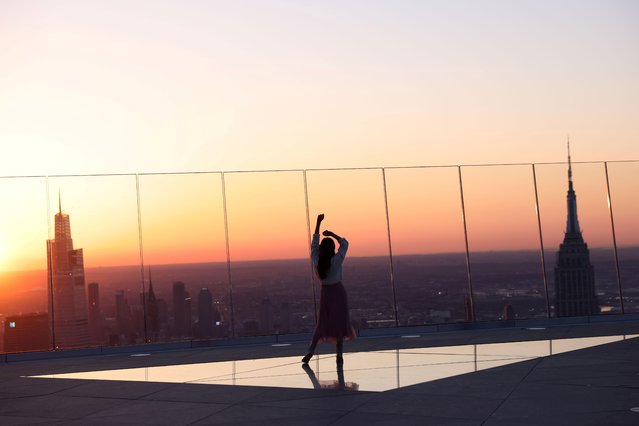 A woman stretches on the Edge at Hudson Yards as the sun rises over Manhattan on spring equinox, in the Manhattan borough of New York City, New York, U.S., March 20, 2021. (Photo by Caitlin Ochs/Reuters) 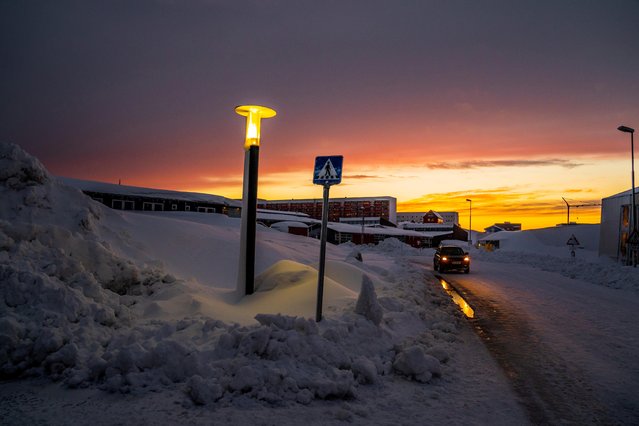 The sun sets over Nuuk on April 4, 2021 ahead of the April 6 parliamentary election in Greenland. (Photo by Emil Helms/Ritzau Scanpix via Reuters) 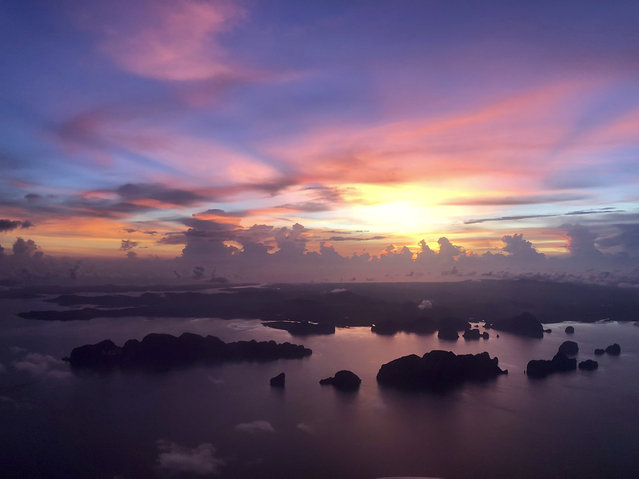 The sun sets over outlying islands as a plane prepares to land on the resort island of Phuket, Thailand on Wednesday, May 22, 2019. Thailand hopes to first fully reopen the island of Phuket, its most popular destination, by July 1 for vaccinated visitors without quarantine. But they will be required to spend a certain time, possibly up to a week, on Phuket before they are allowed to travel elsewhere in Thailand. (Photo by Adam Schreck/AP Photo) 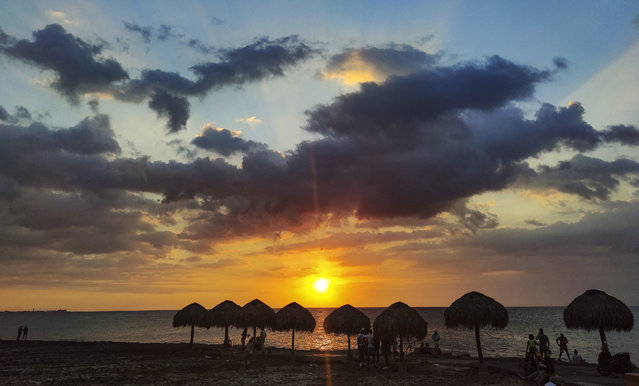 The sun sets as people enjoy the coast in Havana, on March 29, 2021. (Photo by Yamil Lage/AFP Photo) 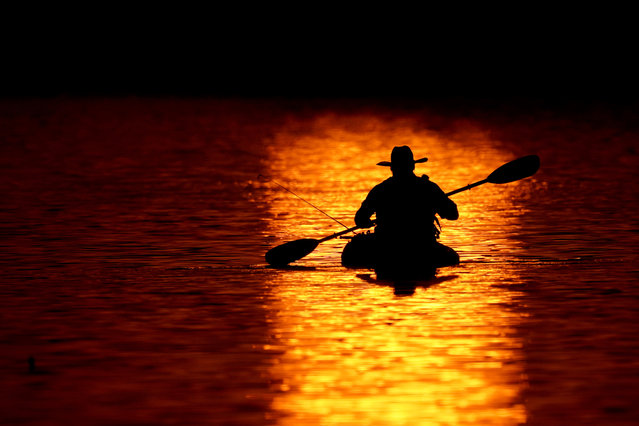 A man kayaks at the end of a warm spring day on Shawnee Mission Lake Saturday, April 3, 2021, in Shawnee, Kan. (Photo by Charlie Riedel/AP Photo) 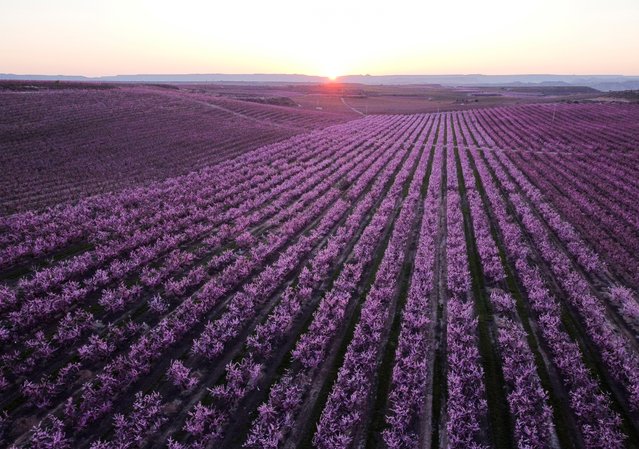