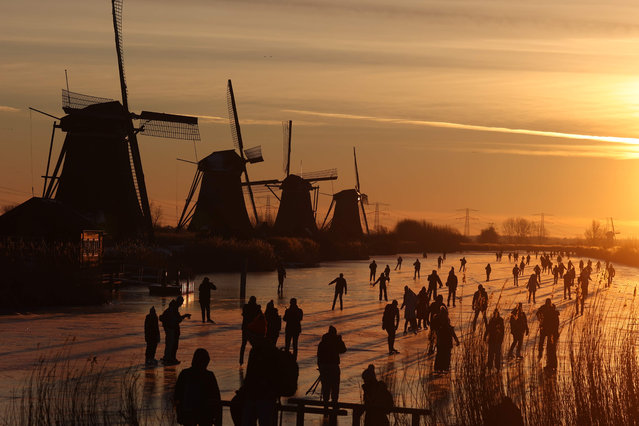 Skaters glide on the ice near windmills in the village of Kinderdijk on February 14, 2021. Skaters are called upon to skate as much as possible in their own neighborhood, to prevent crowds and thus the spread of Covid-19. (Photo by Kenzo Tribouillard/AFP Photo) 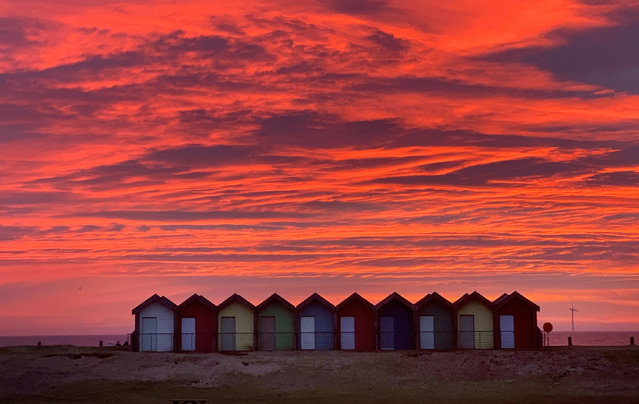 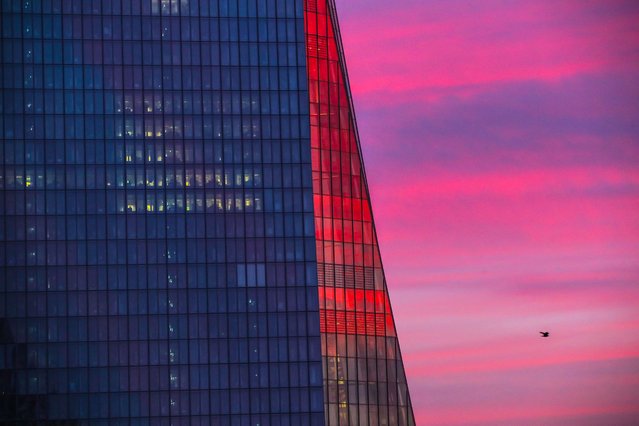 The facade of the headquarters of the European Central Bank (ECB) is tinged by the colours of the rising sun in Frankfurt am Main, western Germany, on February 18, 2021. The European Central Bank announced on February 18, 2021 a drop of a third of its profit in 2020 over one year, seen as the consequence of a weak dollar and falling interest despite its expansive policy in the face of the Covid-19 pandemic. (Photo by Armando Babani/AFP Photo) 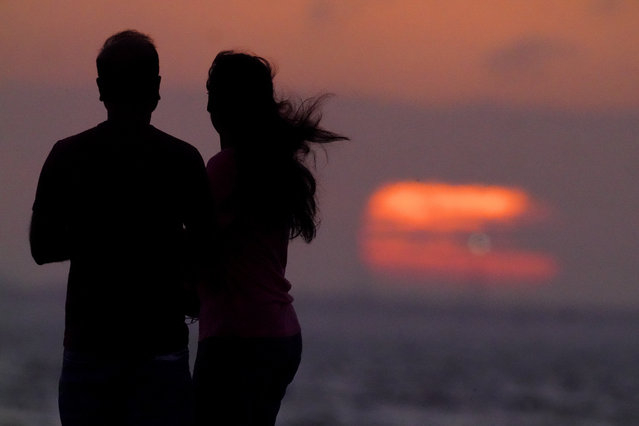 In this February 6, 2021, file photo, people watch the sun set over Tampa Bay in Tampa, Fla. Amid fears of new variants of the virus, new restrictions on movement have hit just as people start to look ahead to what is usually a busy time of year for travel. (Photo by Charlie Riedel/AP Photo/File) 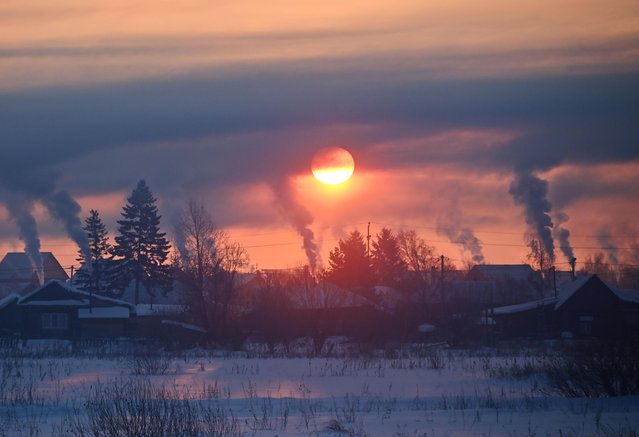 Smoke rises from the chimneys of houses on a frosty winter morning in the town of Tara in Omsk Region, Russia on February 23, 2021. (Photo by Alexey Malgavko/Reuters) 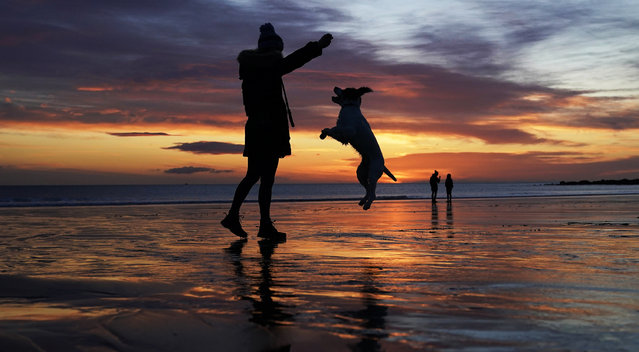 A woman throws a ball for her dog as the sun rises at Tynemouth Longsands beach in Tyne and Wear on the North East coast on Friday, March 12, 2021. (Photo by Owen Humphreys/PA Images via Getty Images) 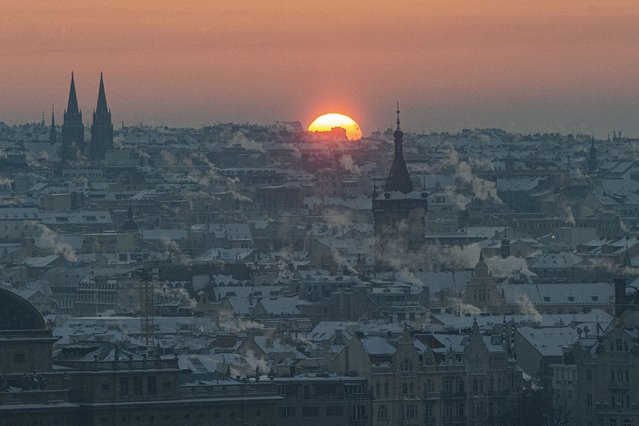 The sun rises over the snow covered rooftops of central Prague on February 12, 2021, as the temperatures dropped to minus 17 degrees Celsius in the Czech capital. (Photo by Michal Cizek/AFP Photo) 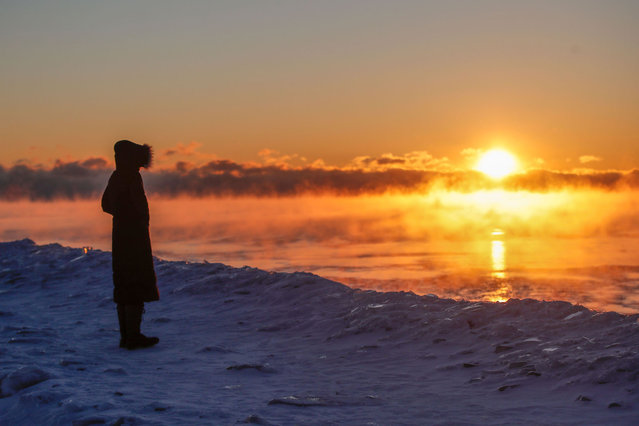 A man walks along Lake Michigan as the sun rises in Chicago, Illinois, on February 7, 2021. According to the National Weather Service, dangerous wind chills can bring temperatures to up to 25 degrees Fahrenheit below zero in the Chicago area on Sunday. (Photo by Kamil Krzaczynski/AFP Photo) 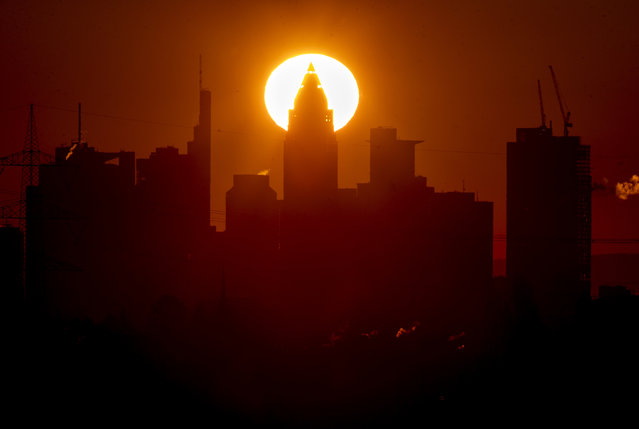 The sun rises behind the buildings of the banking district in Frankfurt, Germany, Saturday, March 6, 2021. (Photo by Michael Probst/AP Photo)

A panoramic view, made of multiple images, shows heavy fog covers the landscape near Salgotarjan pictured from the Castle of Salgo, Hungary, 20 February 2021. (Photo by Peter Komka/EPA/EFE) 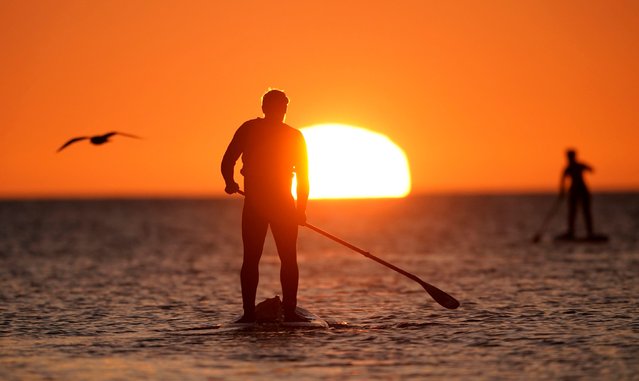 Paddleboarders at sunrise in Cullercoats Bay, North Tyneside, on the North East coast of England on Saturday, February 27, 2021. (Photo by Owen Humphreys/PA Images via Getty Images) 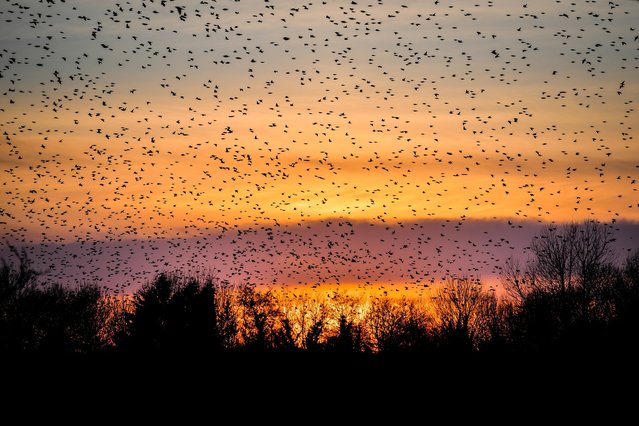 A murmuration of starlings pass Glastonbury Tor as they fly off to roost on the Somerset Levels at sunset on February 13, 2021. (Photo by Ben Birchall/PA Images/Profimedia) 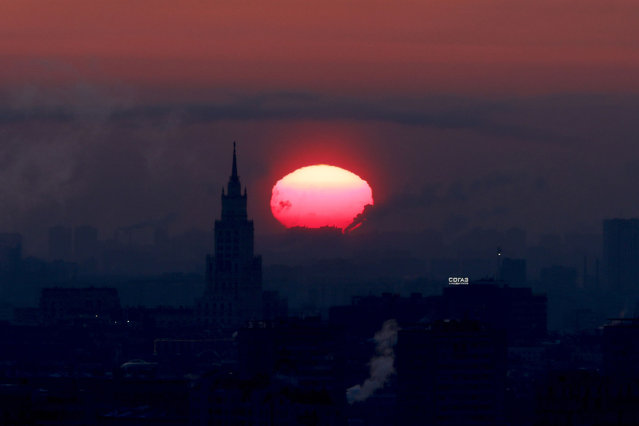 Sun rises over Moscow as temperature dropped to minus 21 degrees Celsius in Russia on March 10, 2021. (Photo by Sefa Karacan/Anadolu Agency via Getty Images) 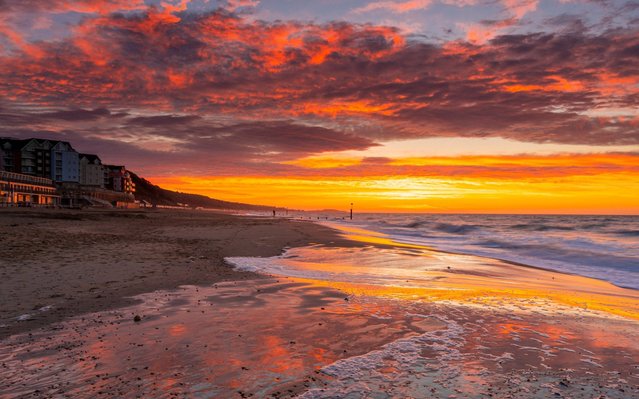 The sunrise at Boscombe beach at Bournemouth in Dorset, southwest United Kingdom on February 23, 2021. (Photo by Steve Hogan/pictureexclusive.com) 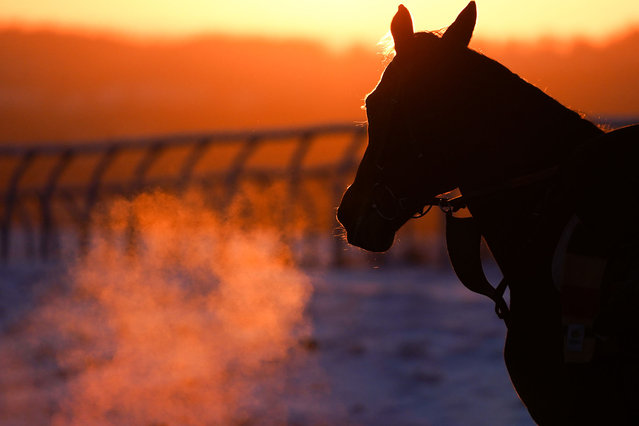 A race horse is given it's daily exercise on Middleham gallops in North Yorkshire on February 11, 2021 in Middleham, England. Horse racing stables based in and around Middleham exercise race horses on the gallops every day, in all weathers. (Photo by Ian Forsyth/Getty Images)
Edit Del
31 Mar 2021 08:36:00, post received 0 comments
Publication archive:
←   →
Popular tags:
All tags
Last searches: