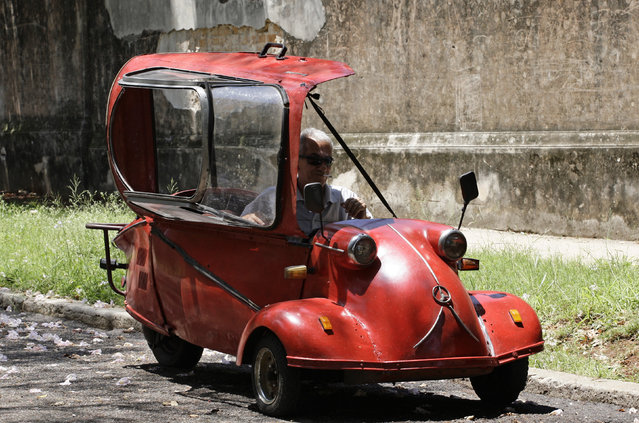 Jose Alberto Sarmiento sits in his 1957 Messerschmitt KR200 microcar on a street in Havana May 20, 2010. The bubble car has been in the possession of the lamp maker's family since before the Cuban Revolution. The three-wheeler was produced by the German aircraft manufacturer Messerschmitt from 1955 to 1964. There are only 36 of the cars remaining in Cuba. (Photo by Desmond Boylan/Reuters) 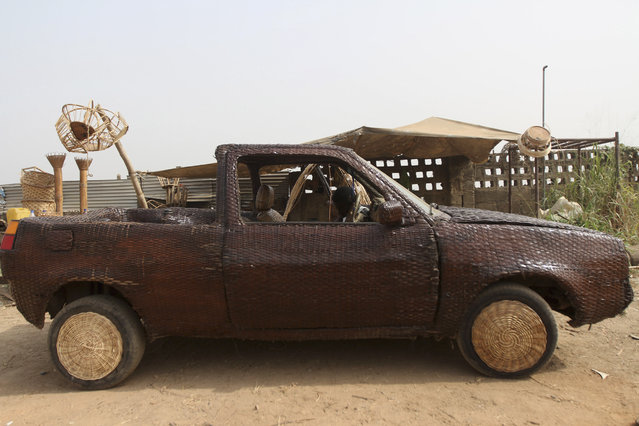 A converted car, which is covered with woven raffia palm cane, is parked in front of an artisan workshop in Ibadan, southwest Nigeria January 10, 2013. (Photo by Akintunde Akinleye/Reuters) 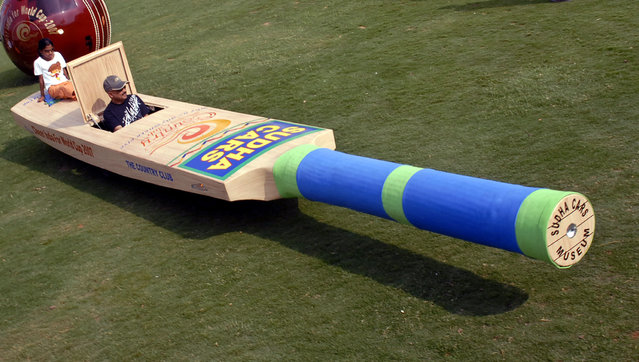 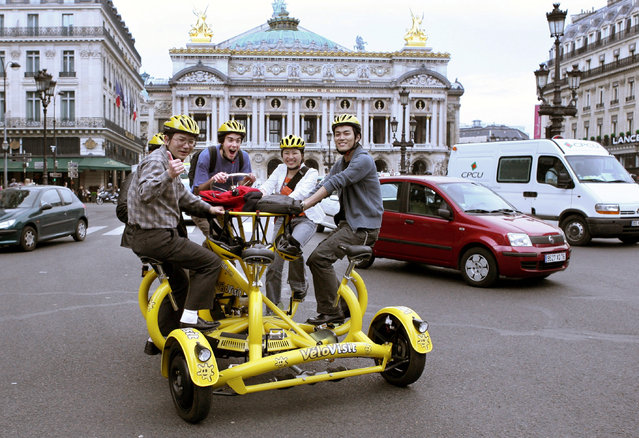 Tourists pass by the Paris Opera on a Velovisit in Paris April 24, 2006. The bike has seven seats designed for a driver and six passengers who sit in a circle and chat while pedalling. The driver holds the handlebars, which look more like a steering wheel, and is responsible for braking. The Velovisit can be hired for a tour through Paris, with or without a guide. (Photo by Charles Platiau/Reuters) 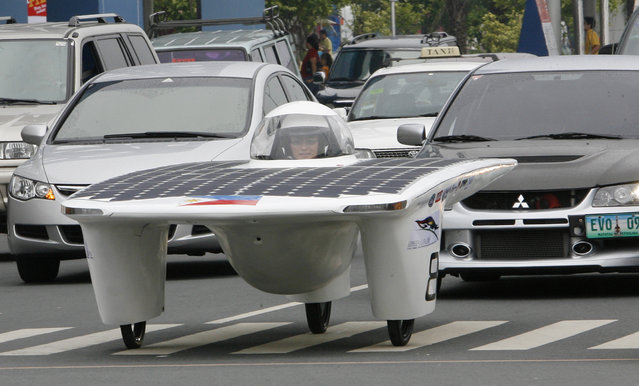 Eric Tan, one of the students who designed and constructed the first Philippine solar-powered car, drives past vehicles along a street in Manila September 1, 2007, after it was unveiled. (Photo by Romeo Ranoco/Reuters) 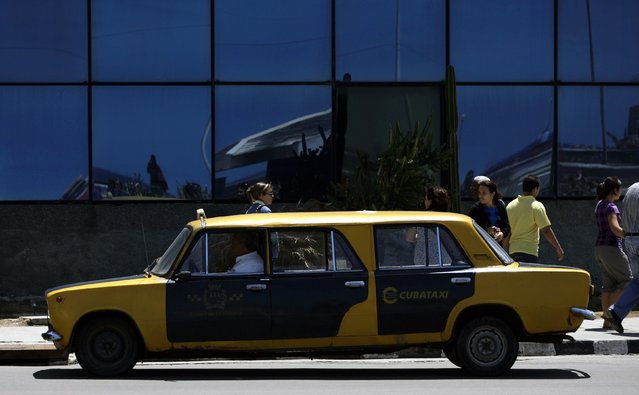 A man drives his taxi, a do-it-yourself stretch job performed on an old Soviet-era Russian car called Lada, in Havana March 30, 2010. From horse-drawn carts to 1950s Chevrolets, overcrowded sidecars to motorized bicycles, old military vans to a pair of Lada cars melded into one, anything goes on the roads of Cuba, a virtual living transport museum. (Photo by Desmond Boylan/Reuters) German bicycle designer Didi Senft, poses in a costume with a self-made bike honouring the late U.S. singer Michael Jackson in the village of Philadelphia near Storkow, some 50 km (31 miles) south of the German capital Berlin, April 6, 2010. Senft, a cycling fan better known as “El Diablo” from the Tour de France, is to embark on a 13-day tour with his bike, visiting capitals around Europe to pay tribute to Michael Jackson. (Photo by Thomas Peter/Reuters) 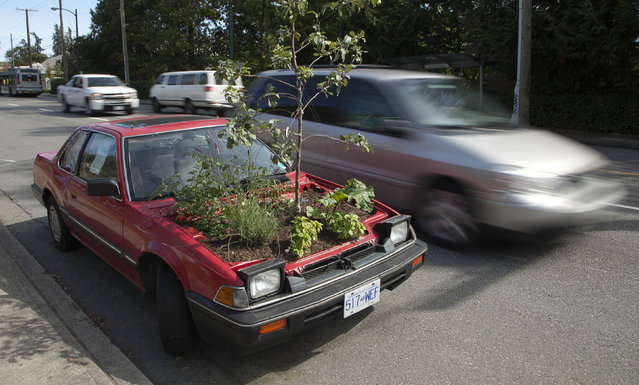 A car sits on the street with a garden growing where the engine should be in Vancouver, British Columbia August 30, 2010. The car is part of a program called The Stick Shift Project which is part of a collaborative urban transformation in which four cars have had their engines removed and a small garden planted. The cars have been parked in several locations around Vancouver. (Photo by Andy Clark/Reuters) 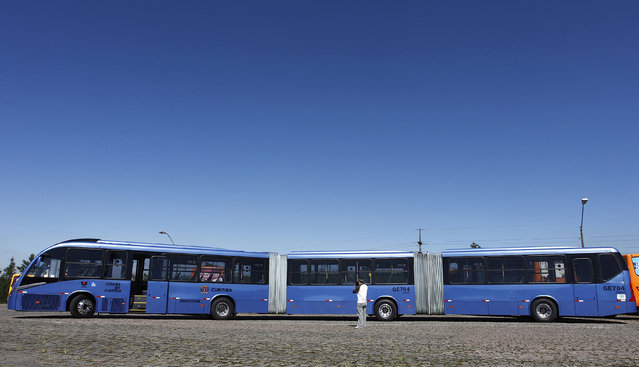 A view of what the Curitiba City Hall is calling the world's longest articulated bus, as it was presented to the press before going into service on the city's public transportation grid, in Curitiba April 5, 2011. The bus, made in Brazil by Volvo with a Neobus chassis, has a capacity of 250 passengers, is 28 meters (92 ft) long, 2.6 meters (8.5 ft) wide, and powered with biodiesel made from soybeans. (Photo by Rodolfo Buhrer/Reuters) 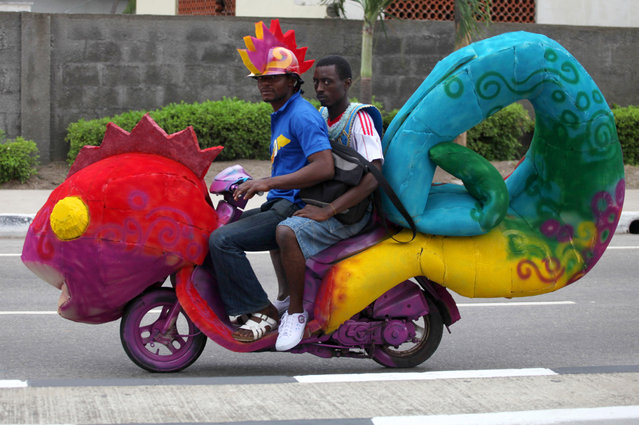 People riding a motorcycle attend a street carnival at Tafawa Balewa square in Nigeria's commercial capital Lagos April 30, 2011. The carnival was organised by the Lagos metropolitan government as part of Easter celebrations. (Photo by Akintunde Akinleye/Reuters) 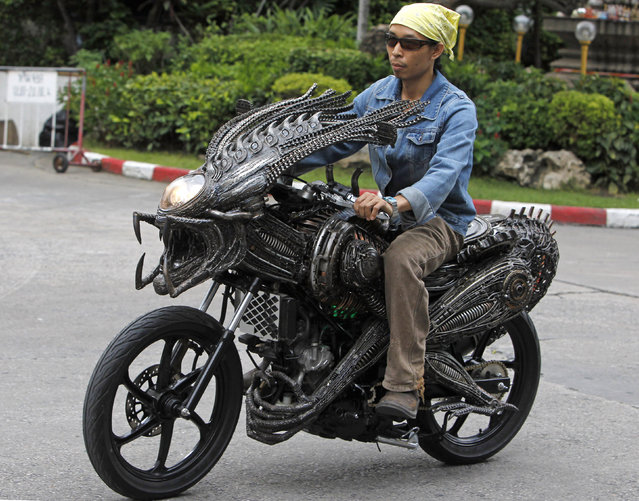 A worker drives a motorcycle made from recycled materials of spare parts from cars and bicycles at a workshop owned by Roongrojna Sangwongprisarn in Bangkok July 27, 2011. Roongrojna, 54, creates his artworks from recycled spare parts from used cars, motorcycles as well as bicycles. With four shops in Bangkok named “Ko Art Shop”, Roongrojna also exports his artworks to clients all over the world. (Photo by Sukree Sukplang/Reuters) 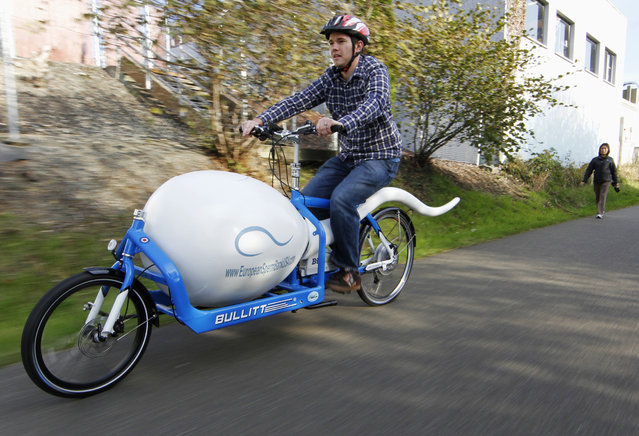 Biological analyst Alan Dowden of the Seattle Sperm Bank rides the Sperm Bike, a custom-designed, high-tech bicycle used to deliver donated sperm to fertility clinics, in Seattle November 8, 2011. According to Seattle Sperm Bank's managing director Gary Olsem, donor sperm is transported by medical technicians aboard the bike, which is the second of its kind, in liquid nitrogen cooled vacuum containers. The first Sperm Bike was adopted by Seattle Sperm Bank's sibling company, the European Sperm Bank, in Cophenhagen. (Photo by Anthony Bolante/Reuters) 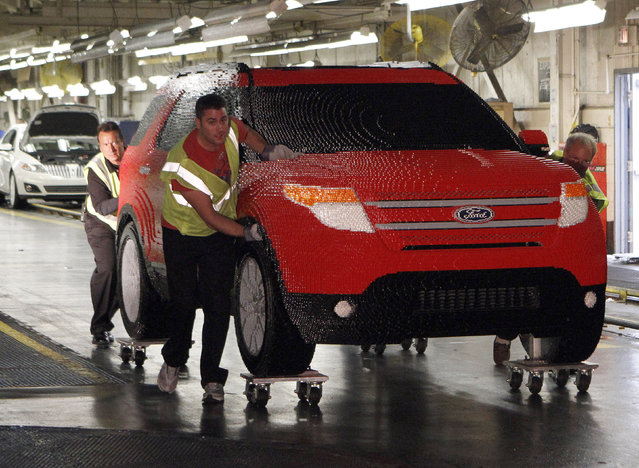 A worker test drives a car in the shape of a heels on a road in the southern Indian city of Hyderabad March 7, 2012. The shoe is part of a ladies series of creations by Indian car designer Sudhakar Yadav to mark the International Women's Day and the car can run at a maximum speed of 45 kph (28 mph). (Photo by Krishnendu Halder/Reuters) 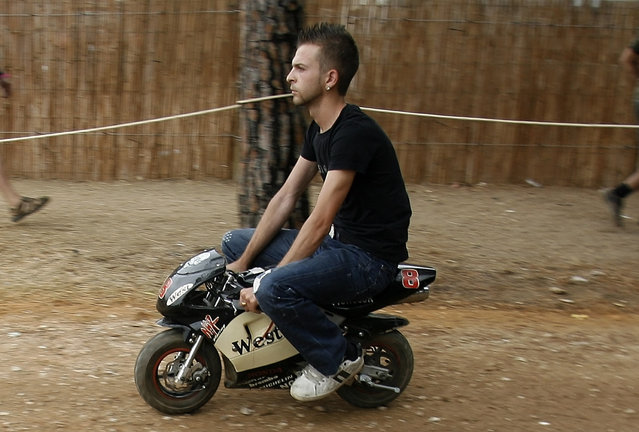 A biker takes part in the 27th International Motorcyclist Summer Rally in Faro in the southern province of Algarve July 19, 2008. (Photo by Nacho Doce/Reuters) A woman and her son sit inside the capsule of an electric tricycle as they drive along a main road in central Beijing March 15, 2012. (Photo by David Gray/Reuters) 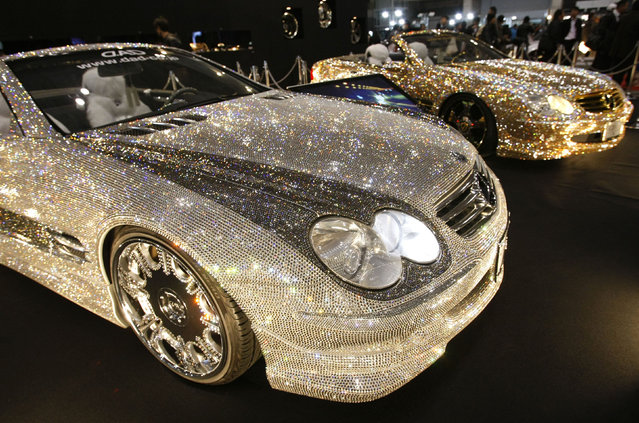 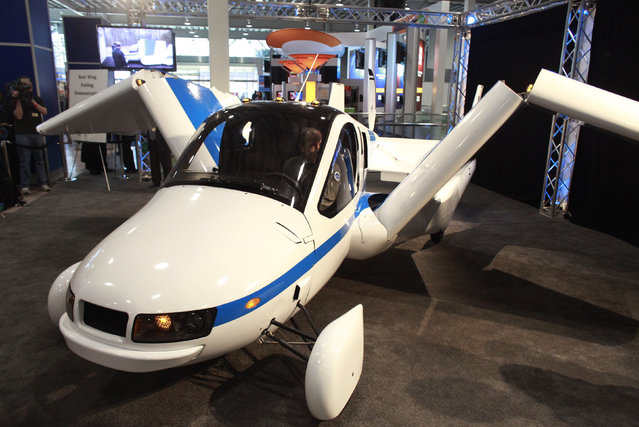 The Terrafugia Transition, a flying car, unfolds its wings at the 2012 New York International Auto Show at the Javits Center in New York, April 5, 2012. (Photo by Allison Joyce/Reuters) 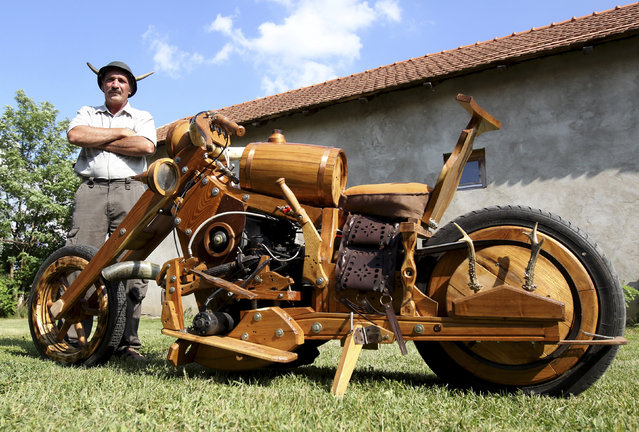 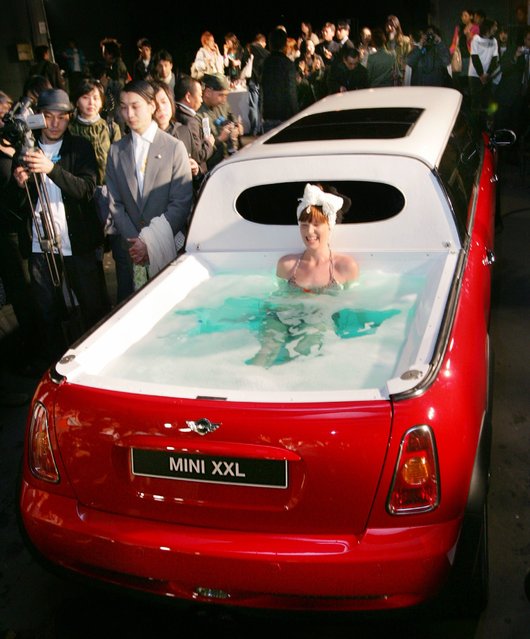 A model wearing a bikini soaks in a jacuzzi on the rear end of a limousine named “Mini XXL” at the Japanese designers' brand THEATRE PRODUCTS Fall Winter 2005 collection, at the National stadium in Tokyo April 6, 2005. The six metre (about 20 feet) long stretch Mini Cooper S, equipped with six wheels, four doors, six passenger seats and a jacuzzi, is touring around Europe and parts of Asia where it is set to be the star attraction at various events, the organizers said. (Photo by Issei Kato/Reuters) 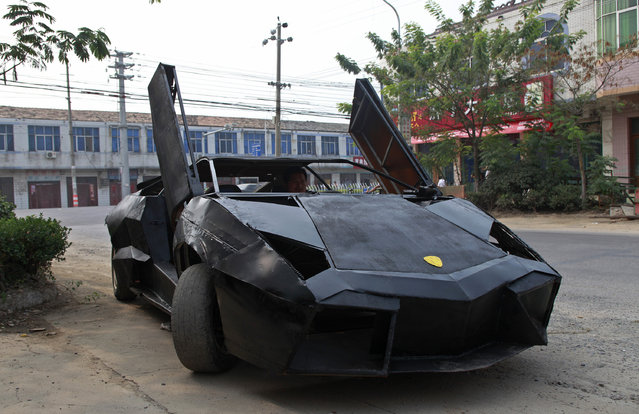 A friend of Wang Jian sits in a hand-made replica of a Lamborghini Reventon in Suqian, Jiangsu province August 30, 2012. Wang, a young Chinese farmer who worked at a garage for more than a decade, built the replica of a Lamborghini Reventon with a second-hand Nissan and Santana. The self-made roadster cost Wang around 60,000 RMB ($9,450) and can reach a maximum speed of 160mph, according to local media reports. (Photo by Reuters/Xihao) 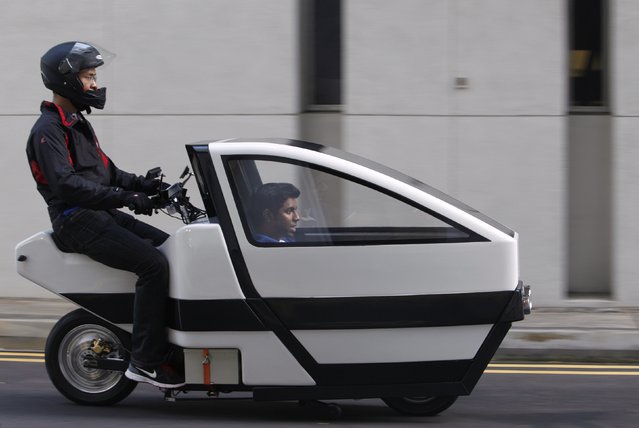 Members of the TUM CREATE group ride a prototype of their VOI scooter at the Nanyang Technological University (NTU) in Singapore May 28, 2013. The electric-powered VOI multipurpose scooter was designed to provide the ease of mobility and affordability of a scooter while offering car-like comfort and protection to the passenger. TUM CREATE is a joint research programme between Germany's Technische Universitat Munchen (TUM) and the NTU. The group is looking to further develop the prototype. (Photo by Edgar Su/Reuters) 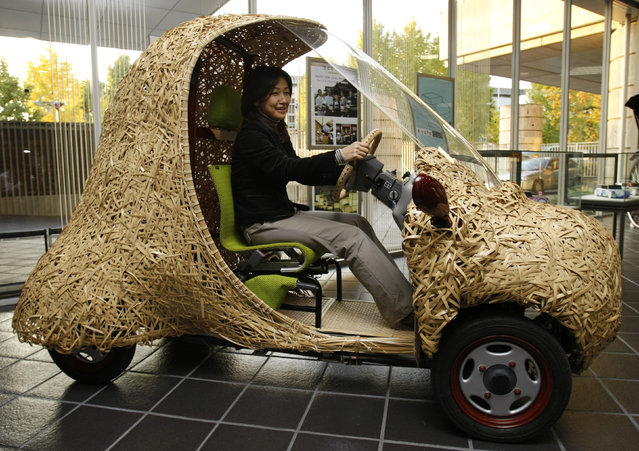 “Bamgoo”, an electric car with a body made out of bamboo, is displayed in Kyoto, western Japan November 14, 2008. The sixty-kilogram single-seater ecologically friendly concept car, which measures 270 centimeters in length, 130 centimeters in width and 165 centimeters in height, is developed by Kyoto University Venture Business Laboratory, featuring bamboo articles in the Kyoto area. The car can run for 50 kilometers on a single charge. (Photo by Issei Kato/Reuters) 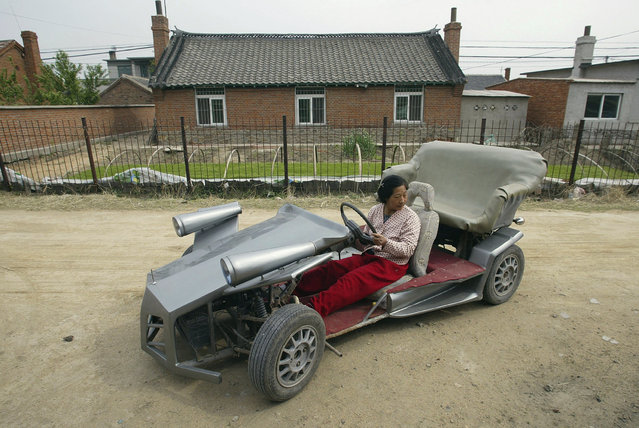 Zhang Jinduo's wife tries on a self-made racing car on the outskirts of Shenyang, Liaoning province May 10, 2008. Zhang, the 53-year-old local farmer made the racing car with the help of his son who is a car mechanic. The car is equipped with a rear-mounted motorcycle engine and can achieve 60-80 km per hour, according to local media. (Photo by Reuters/Stringer) 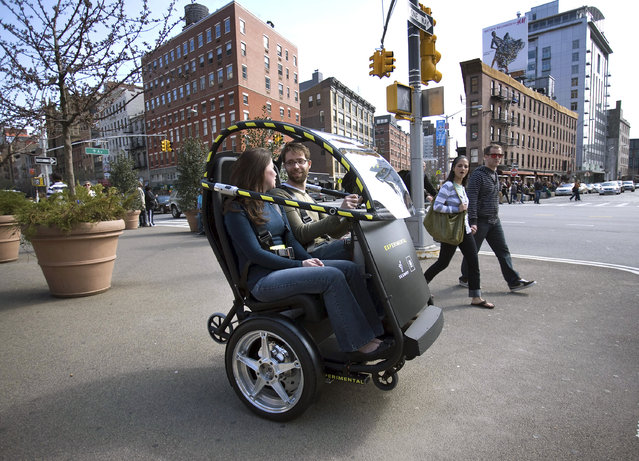 Car designer Sudhakar Yadav drives a car in the shape of a snooker table during a promotional event in Hyderabad November 11, 2009.The car has three wheels with a 150cc engine and it can runs a maximum speed of 45 kph (28 mph). Picture taken November 11, 2009. (Photo by Krishnendu Halder/Reuters) 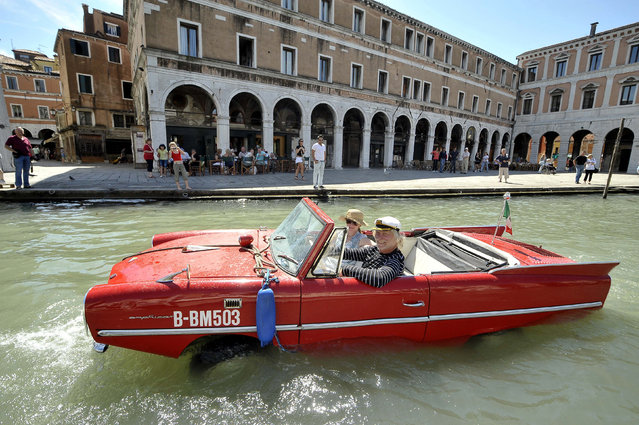 Bernd Weise, of the Amphicar Club Berlin, pilots his 1961 Amphicar down the Grand Canal in Venice May 28, 2009. The German-built amphibious car, which uses a Triumph Herald engine, is capable of over 110 kph (70mph) by road and 8 knots on water. Its driver a needs regular driving licence and a boat licence. (Photo by Michele Crosera/Reuters)
Edit Del
17 Sep 2013 08:46:00, post received 0 comments
Publication archive:
←   →
Popular tags:
All tags
Last searches: